Store Page
Team Fortress 2 > Guides > karlo's Guides
This item has been removed from the community because it violates Steam Community & Content Guidelines. It is only visible to you. If you believe your item has been removed by mistake, please contact Steam Support.
This item is incompatible with Team Fortress 2. Please see the instructions page for reasons why this item might not work within Team Fortress 2.
Current visibility: Hidden
This item will only be visible to you, admins, and anyone marked as a creator.
Current visibility: Friends-only
This item will only be visible in searches to you, your friends, and admins.

What Is a Console?

How to activate console in game?

How to activate console in Steam game library?

How to use console?

Comments
What Is a Console?
The console is a part of the user interface aimed at the game developers, content authors and power users. It is a text based interface that allows the user to enter text commands that the game interprets.
How to activate console in game?
To enable console in game You need to enter into game options.
Then in "Keyboard" tab press "Advanced" button. 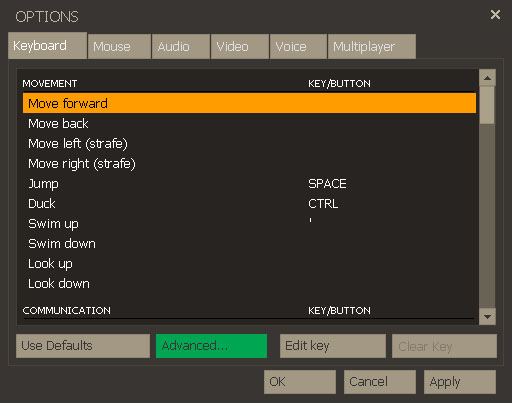 Small window will pop-up.
There are two options. Check the second option and press OK.

Above steps are showing way to activate console in game Team Fortress 2.
In other Valve productions (like Half-Life or Counter-Strike) console activation method is the same and that option is mostly in same place - in keyboard advanced options.
How to activate console in Steam game library?
Open Your game library in Steam.
Find Team Fortress 2, press right mouse button on it and choose "Properties". 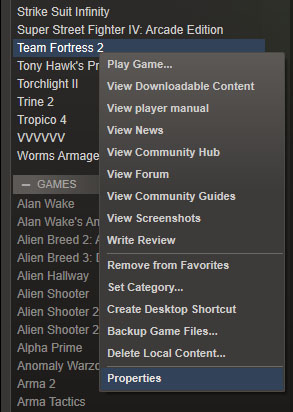 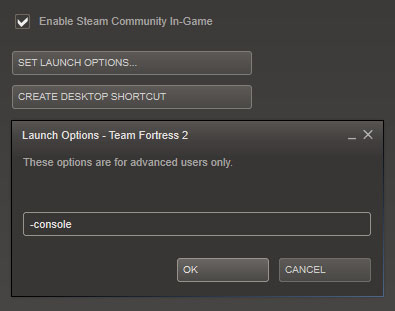 How to use console?
To open console You need to press ~ key on Your keyboard.
With tabulator key You can see hints to commands.
To separate many commands in one line use semicolon.
To send commands just press Enter.

cl_ commands
cl_ask_blacklist_opt_out <0/1> - Turns question whether to blacklist a server after leaving after a short amount of time off/on (Default: 0)

cl_ask_favorite_opt_out <0/1> - Turns question whether to favorite a server after leaving after a longer amount of time off/on (Default: 0)

cl_flipviewmodels <0/1> - Sets viewmodels normal/inverted(left-handed) - does not work while connected to a server (can also be changed from advanced options) (Default: 0)

cl_interp <0~1> - Sets how far character models are interpolated (drawn away from their actual position) in the world, a good standard value for hitscan weapons is 0.034[/code]

addcond 5 - Gives the player the ÜberCharge effect that can be removed if healed by Dispenser, Medic or being killed

addcond 11 - Gives the player a critical effect that can be removed if healed by Dispenser, Medic or being killed

addcond 64 - Player will Cloak immediately regardless of class. Used for the Invisibility Magic spell.

addcond 74 - Makes the player 10 times bigger and 10 times the health, also player will have infinite ammo but not clip size - player's melee range will remain the same

ent_create item_teamflag - Spawns in a white Briefcase where the player is aiming. Note: Both teams can pick up the spawned Briefcase

ent_create tf_zombie - Spawns a Skeleton where the player is aiming

ent_create tank_boss - Spawns a Tank Robot where the player is aiming

tf_ commands
tf_allow_player_use <0/1> - Toggles the +use command on a server, useful for some custom maps. (default: 0) - server operator only

tf_allow_taunt_switch <0/1/2> - Disallows/allows switching weapons during taunts. (1 = start of taunt only; 2 = at any time during the taunt) - server operator only (Default: 0)

tf_dingaling_pitchmaxdmg <0-255> - Sets the pitch of maximum damage with your weapon, a lower pitch is recommended in most cases, (default: 100)

tf_dingaling_pitchmindmg <0-255> - Sets the pitch of minimum damage with your weapon, a higher pitch is recommended in most cases, (default: 100)

tf_flag_caps_per_round - Sets the number of times the intelligence must be captured in Capture the Flag for a team to win (default: 3) - server operator only

tf_matchmaking_join_in_progress <0/1> - Toggles whether or not Casual matchmaking will send the player into a match in progress. (Default: 1)

tf_romevision_skip_prompt <0/1> - If nonzero, skip the prompt about sharing Romevision. (Default: 0)

tf_scoreboard_mouse_mode <0/1/2> - Allows the user to interact with the scoreboard and right-click on player names to view a set of available actions, such as "Profile", which opens the Steam profile of the chosen user. Set to 1 to turn on at all times, and set to 2 to only turn on when the user clicks while viewing the scoreboard. (Default: 0)

tf_scoreboard_ping_as_text <0/1> - Toggles if players pings are represented by numbers (text) or as 'connection strength' bars (Default: 0)

tf_taunt_first_person <0/1> - taunts are in first person for full-body awareness mode (for use with Oculus Rift) (Default: 0)

sv_lan <0/1> - Allows/Disallows people on non-local networks from joining. - server operator only
Pictogram comment.png In order to host a listen (in-game) server that people can connect to over the Internet, your 27015 port must be forwarded

sv_pure <0/1/2> - Determines how much custom content (HUDs, animations, sound mods) should be allowed on a server (0: Allow all; 1: Uses sv_pure.cfg; 2: Uses sv_pure_strict.cfg) - server operator only

mp_teams_unbalance_limit <number> - The team size difference at which players are forced onto the opposite team. - server operator only

mp_restartgame <seconds until restart> - Restarts the round and resets the round time. - server operator only

mp_timelimit <minutes> - The length of time that a map should last before swapping. - server operator only

hud_saytext_time <seconds> - How long to display chat comments before they fade out.
Miscellaneous commands
For players
bind <key> <command> - Binds a key to a command.

bind <key> - Displays the command the given key is bound to.

dropitem - Drop the flag or intelligence.

+attack - Forces the player to constantly use their primary fire. (Same as M1) (-attack will disable)

+attack2 - Forces the player to constantly use their secondary fire. (Same as M2) (-attack2 will disable)

+attack3 - Forces the player to constantly use their tertiary fire. (Same as middle-click or M3) (-attack3 will disable)

jointeam <red/blue/auto/spectator> - Force team. (use this if you are stuck in "dead spectator" mode when too many people attempt to join a team at the same time)

noclip - Allows the players on the server to fly through walls. - sv_cheats 1 only.

viewmodel_fov <number> - Sets distance in which your weapons are drawn, higher values show more of the weapon and arms but may show missing parts. (can also be changed from advanced Options)

r_drawviewmodel <0/1> - Turns viewmodels on and off. (can also be changed from advanced Options)

find <text> - Displays all commands that match a string of text

zoom_sensitivity_ratio <0~1> - Sets the ratio of sensitivity while zoomed in with the Sniper Rifle with accordance to actual sensitivity.

net_graph <0-4> Shows different amounts of information such as ping, framerate, lerp, and packet loss depending on the input value,
thirdperson - Places your view in a camera behind your character - sv_cheats 1 only
thirdperson_mayamode - If active, turning in third person does not move the camera - sv_cheats 1 only

thirdperson_platformer <0/1> - If active, the mouse controls the camera while movement is controlled relative to it. If thirdperson_mayamode isn't active, walking towards the camera will 'push' your view away.

firstperson - Return to first person perspective. If thirdperson_platformer is still set to 1, you will not be able to move the camera during taunts.

currency_give <amount> - Gives a specified amount credits in Mann vs. Machine - sv_cheats 1 only

snd_restart - Used to restart all sounds in any game mode.

taunt_by_name <taunt name> - Runs a specified taunt, given the exact name of a taunt in the player's current taunt loadout, without having to open the taunt menu.

map <mapname> - Changes the map and restarts the server. Starts a new server if entered on the main menu - useful for bypassing the "Create New Server" dialog and map drop-down menu

nextlevel <mapname> - Sets the next map to be played.

rcon_address <ip address> - Sets the server address to send rcon commands to (if not set, console sends the command to the server that the player is currently in instead)

tf_ctf_bonus_time <number> - Determines how long (in seconds) guaranteed critical hits are enabled when the intelligence is captured on a CTF map. 0 disables them entirely.

ds_mark <comment> - Bookmark the current demo tick count for future reference. The <comment> is an optional descriptor you may include.

party pooper Dec 31, 2020 @ 9:56am
is there a command that resets everything to default? i changed my interp, interp_ratio, rate, update rate, and cmdrate and now i cant rocket jump. if there is no default commands could you tell me the default vaules so i can change manually? ty

Lily loves Grey Jun 6, 2020 @ 7:32am
Is it possible to use a command to make the mouse be on one specific angle? I'm making a sequence that needs the mouse to be looking straight forward 90 degrees, but still at the x-axis the mouse was on before.

It might be a bit hard to convey, but basically I want to use a bind to instantly turn 180 degrees and fire off a shot from my Sniper Rifle, in order to deter or otherwise weaken any Scouts or Spies that sneak up on me. My problem is if I'm facing up at that time, I will still turn 180 degrees but I'll be facing up at the end of the sequence. I want to face behind me without having the mouse look up or down at the end, just in the middle.

@ukko you can do this by going into the autoexec.cfg file, putting net_graph 1 on a new line, and saving.