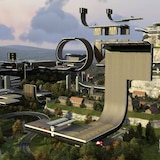 Thick As A Brick
(ENG)

Having problems reading the sings?
Download this pack: https://mega.co.nz/#!rEQhFBLD!SSjn93X90IWBrDCY0ykrHR2-h1oVu1zUv4umLMjneN8
Put the "Cmnty" folder of this .zip comes into My Documents/ManiaPlanet/Skins/Any/Advertisement/

SOMA
11.1 Hours played
SOMA is one of the most intense experiences i ever had the pleasure of dipping into and it's undeniably s brave videogame; it boldly challenges the current market tendencies without the fear of crafting a product that won't be appreciated by the masses.
It is a title that should be played by those who believe that videogames are not capable of conveing deep messages and that they should only be considered as mindless entertainment.

The game showcases Frictional Games' growth as a developer, moving from the "scary enemies" induced fear, to a more refined horror experience, relying on feelings of oppression, hope, sadness, humanity, claustrophobia, loneliness, identity and decay, rather than simply exploiting dark alleys, scary monsters and cheap jump scares; this aspect of the game is what will make it less popular, but more worthy of the "Masterpiece" label.

SOMA puts you inside a society in decay and on the brink of extinction, because of a natural disaster that forced the very few surviving people to live underwater.
This aspect might feel close to the "Vaults" idea (made popular by the "Fallout" franchise), but where the Bethesda games deal with a feeling of "rebirth" (society starting from scratch after a catastrophe), in SOMA we see the humanity on its last days, and you can feel the depression of mankind knowing it can't save itself.
I'm tempted to say more, but it would spoil the story; let's just say the whole narrative universe feels very well grounded and indeed real and connected (not to mention very engaging).

SOMA is a game in which the environment and the enemies rarely pose a thread, but it still manages to be more stressful and horryfing (in a good way of course, considering it's a horror game) than such titles as "Amnesia The Dark Descent" or "Penumbra".
The horror in this game is awakened by the player identifying as the protagonist, and what you'll imagine while playing can be scarier than what you'll actually see; It's a game which speaks to the player and scares him on a sub-concious level.

Knowing that the world istelf and the story have the major roles inside the experience, the developers didn't have to rely so much on enemies, like in their previous games, so the encounters with them are pretty rare, but each foe has its own "set-piece" and really shines through as a character of the story, rather than a "trash-mob" to simply avoid.
The rest of the gameplay really carries on what the previous Frictional games were made of, mostly physical puzzle-solving and exploration.
The world is very well characterised and you'll genuinely care about the storie's progression, making each chapter a step closer to the "grand finale".

The most amazing thing SOMA has going for itself, though, it's the ability to leave you with something after you have completed it.
The game will make you think about life's meaning and significance, will make you question morality and what it means to be human; it will even make you go through sleepless nights thinking about what you just witnessed, and it will also make a very interesting conversation starter with friends who played the game as well.

The graphics are surprisingly great for a game with this sort of budget and audience.
There are not many fancy effects or shaders, but the levels are so original, well designed and detailed that you won't care about the not 4K textures and so on.
The sound design is even better, adding an insane amount of atmosphere to the macabre depths of the "Pathos 2" underwater station (the setting of the game).

I still think the game is a masterpiece, but of course it's not perfect; the main issue can be found in its difficulty.
The few enemies you encounter are scary because of the design, but can sometimes be easy to exploit, and that might take a little away from the whole experience.
You never feel like there's a terrible hidden menace lurking around that might catch you at any time (like in Alien Isolation, for example); you'll be relieved to know, though, that the game is jumps-cares free, which is always a good thing.

That said, SOMA remains one of the best games i have ever played in my life, and one of the best narrative experience i have ever had the pleasure to dig into, considering every possible medium (books, films, comics, ecc...).
It's a must buy for people who aren't afraid of dealing with somehow depressing themes and really want to see what a masterfully crafted environmental narrative experience can provide to the player.

One of the most though-provoking games on the market.
Leave a comment
View all 20 comments < >
Comments