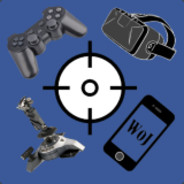 Emulators for playing with joysticks

Dear users,
I've fixed the bugs with RGB Color Cycle synchronization between different devices, in all the emulators. I've increased the version number only for free version to 2.66. Donators can download the updated premium version from the same link.
Play for fun: https://www.worldofjoysticks.com
Only for TRUE gamers 😀
https://youtube.com/shorts/mxpOEwzaEog