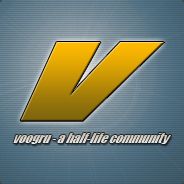 Feel free to invite any of your friends to this group, and to add any or all of the Group Administrators to your friends list. Steam private messages are the best way to alert an Admin of server issues.

(#6 at the bottom is the important bit)

Over the weekend, I gathered together some of the people who helped create the -V- community, roughly 20 years ago, which started around a mod called Team Fortress Classic (TFC), then moved into Natural Selection (NS1), and eventually into TF2. Throughout it all, voogru was there modding away, amazing us with his talents, and carving out a little corner of the internet for us to form a community in.

I was at the end of my college years when NS1 was released in 2002, and after a month of server hopping, I found myself returning to one specific server, even waiting for 30 mins (or more!) just to get in. I had no idea what a voogru was - a made up name for a server, something in NS1 that I hadn't learned about, or some inside joke of the important people of the server. I didn't know there was a budding community, organized tournament ladders, admins, or even a real person behind the name voogru. I just knew that every.single.match. was an epic battle of aliens and marines, sometimes lasting over 3 hours. I was certainly late to quite a few events because I simply could not let my team down and leave the match to go to something as mundane as a job, a class, or a date. Pft, what did those things hold for me when the glory of holding out against Tekish commanding the marines for 3 hours and somehow turning it around to win the match was so very much sweeter?

Talking with the older community members over the weekend, we all had similar experiences with finding the voogru servers. Some were here before me - either with TFC and/or NS1 - and stayed BECAUSE of the community. We had a few lean years there after the death of NS1, where many drifted off and away from the community. Some tried to organize other games for the community, to no avail.

Then TF2 was released, and it launched our community into overdrive, and for the better. Numerous community members returned, and we gained way more (membership wise AND quality wise) than we lost in the first few years. We had some epic games then too. Voog amazed us more with his talents, our forums were ablaze with new members saying hi, and the servers were full practically 24/7.

Over the last year or so, as I've talked with community members who found the voogru community during the TF2 years, I've come to realize their stories are just the same as mine. Time and again, I've had people tell me practically the same story - server hopping, hopped onto a -V- server, enjoyed their time as the games were competitive, returned because of the competitive and fun play (and players), stayed because of the community.

The community. It's that aspect I am most fond of when I talk about my time here with all of you. WE ALL built this community. Every single one of you can be proud of what we built, the friendships we created, the sense of belonging that was fostered, the camaraderie we had.

Today... well, we've all grown up - many of you have kids, others are married or soon to be married, and others have grown away from gaming in general. We've all grown a bit stale of TF2, L4D2, Payday2, 2Fast2Furious, and any other title with a number in it. We all have moved on from the forums, from the servers. The forums no longer are up (they are backed up though), voog pulled the servers, we never really used this Steam group as forums, the -V- reddit hasn't been posted on in a few years and wasn't used much, and I don't even know if voog has a discord.

I wrote all this for a couple of reasons:
1) With as fucked as 2020 is, with many of us at home for months on end, a need for connections and community is at an all time high. If reaching out and connecting with someone you haven't spoken to in years helps in any small way, DO IT. You might even be helping someone who might not know how to ask for or even know that they need help. Our community was based on mutual respect and friendship, those have not changed no matter what the status of our community.

2) Let's use this post as a celebration of each other. Want to reminisce about that one time doing that thing that got the job done? Go ahead! Want to shout out to some old server friends, see if they are still part of the -V- group, and reconnect? Feel free! Want to wax poetically about when you found the servers and community? The floor is yours!

3) As a matter of fact, let's use the group discussions too! Got a discord going for coop games? Got a discord for Apex/Fortnite/Overwatch games? Need a group for Jackbox? Do you have photos or videos of some ridiculous TF2 moments from the -V- servers? Share it! Let's bring this community back a little, one post at a time.

4) Use the -V- group chat for organizing meet ups as well. My "spur of the moment" meet up for TF2 took over an empty server. We had fun, but it we didn't fill the server. If more community members are interested in playing together again, this can be a way of organizing a server takeover. If I am online, ask me to drop an announcement for you.

5) A group of us old timers are going to attempt to play NS1 this coming weekend, Nov 14 and Nov 15, around 1pm Pacific both days. If you are an old person like me a community member who played NS1 and would like to play, hit me up for an invite to my discord. I sent messages to all on my friends list who I know from back then, but I know there are plenty more of you out there.

6) I would like to bring Crazy House back for a weekend - to celebrate each other and the community, to bask in the gloriousness of 30 people talking at once over alltalk, to argue for an hour about AUTOASSIGN and teamstacks, to changing the nextmap away from 2Fort. I can not promise I can bring it back, and I do not have any dates lined up, but I am pushing for it. If you would like Crazy House to come back for a weekend, leave a comment about it, I would like to judge the interest. Crazy House only for now, Insanity House or any dodgeball server will have to wait until there's a next time.

This turned out longer than I thought it would, sorry bout that.

I hope all of y'all are safe, and look forward to a time when I can shoot you from across the map. With love. Or my banhammer. Whichever.

Skroober Dec 25, 2021 @ 10:26am
I guess a TF2 update broke DBS. Even if Voogru has no interest in updating or recompiling anymore, maybe some community members would be able to maintain it.

Skroober Dec 23, 2021 @ 4:20pm
Any way to get a hold of the DBS plugin these days? Since its long been dead would be nice for it to be more widely available, maybe for a community revival attempt if anything.

internet Apr 9, 2020 @ 10:01am
hello friends! if anyone is still playing or wants to pub occasionally, hit me up! had to make a new steam account recently. hope everyone is staying safe & healthy in the post-coronavirus world!

In and Out [Animal Style] Mar 16, 2020 @ 9:47am
Hey everyone. I just wanted to pop in and let you know that one of your long time members "Traumahound" has passed. He was a good person in game and in real life.