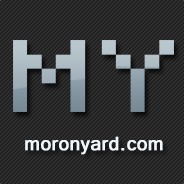 This is the public group for the MoronYard community.

Smash is by far the most communal sever within the MoronYard community. Dodge the falling boxes and stay on top of the platforms to win. Beward of mines placed by enemy players which can cause you to bounce away in random directons, will slow, stun, blind you or reverse your controls. The gamemodes gives you plenty of time to talk to other players, trade items and try out crafting recipes while still playing the game and earning money!

Slope is pretty fast paced for the duration of the time you are alive. The concept is very simple - be the first to reach the top - but beware of traps and falling props! Slope features 2 gamemode types: Rounds and Time Trial


Build to the Top - Currently offline

The concept of BTTT is to build to the top of the map and be the first team to reach the last platform. Make sure to work as a team - repairing props is vital! The first team to finish will be rewarded with cash and item prizes.

Puzzles is a very varied gamemode, there are lots of different types of puzzles - some which can be done alone, others which require a group, some which take pure skill and others which are just having that lucky break. Don't sweat! Every puzzle map comes with it's own lobby where you are able to chill with other players before choosing a puzzle to take on!

A gamemode of deception and murder based off Murder in the Dark and a bit similar to Clue. One person is a murderer with a knife, who is trying to secretly kill off the other players. The other players must use their wits to find out who it is and kill them first. Unfortunately they only have the one gun between them. The gamemode allows you to gather clues to receive a gun or alternatively turn into an accomplice. RDM is punished!

A place to chill and hang out to trade with other members of the community, as well as trade, craft and complete quests and a storyline. The lobby is also the gateway to all of our Sanctuary servers. You can meet up here to form a party and join games together

A 2D side-scrolling survival gamemode which requires you to work with your team (up to 8 players) to hold back the incoming hordes of the undead. The gamemodes features loot, progressive waves, 3 tiers of weapons, runes and runewords, elemental damage and several difficulty levels as well as bosses and superbosses.

A classic climb gamemodes featuring a dozen maps. Get to the finish as quickly as possible. Sounds too easy? Give some negative modifiers a try which will increase the difficulty and net you a lot more cash!

After a couple of years of downtime, the MoronYard servers are up and running again.

The most popular servers have been revived and are being hosted again (RIP BTTT & Murder). All of your profile and inventory data is available, so feel free to jump in right where you left off (all these years ago...).

To celebrate the revival of the servers, a new Christmas event has also been launched. Please find more on the forums[moronyard.com]

Lastly, I encourage everyone to join our discord server[discord.com]

Come join us and enjoy the event!