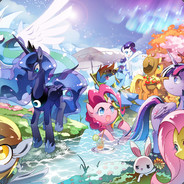 Welcome everypony to the My Little Pony: Friendship is Magic Steam Group!

Chat Rules:
1. No pornographic or excessively gory content in chat.
2. Malicious advertising or spamming will not be tolerated. This includes fishing for referrals.Gaming and art streams are acceptable if not spammed. Suspicious links will be acted on, Textwalls and Long Copypastas are prohibited.
3. Get along with one another; a bit of joking around is OK, but try not to overdo it. Harrasment will not be tolerated, nor extreme racism.
4. The chat room is not for roleplay. Shorter actions are allowed but extended or detailed roleplay should be taken to private messages.
5. Do not post MLP spoilers until after the episode is officially available online.
6. English only
7. Don't constantly shitpost.
8. Don't linesplit. http://pastebin.ubuntu.com/6666337/
9. You're responsible for your Steam Account; letting your friend use it is not an excuse. Also, Emoticon spam and Steam inventory links are not allowed in chat.
10. Trading is allowed if not spammed or consistently advertised. However, joining chat and asking to trade isn't.
11. Complaining about rules and mod actions in chat will get you in deeper trouble, insulting a mod will not be tolerated. Bring it up with a mod in a PM. Do not be disrespectful toward Mods and Admins.
12. Intergroup Drama is not allowed, if it turns out there is proof of anyone inciting drama you will be punished.

The rules are a guideline for behavior. Mods are allowed (and encouraged) to act if doing so helps the general mood of the group.

Common Sense is a must

Current Avatar is by Sweetsound[derpibooru.org].

Make sure to check out our Discord https://discord.gg/mFYqNqR


The mid-season finale is finally here! We are haflway there.

Make sure to check out our Discord https://discord.gg/mFYqNqR