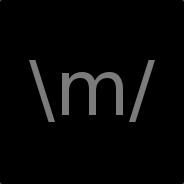 INTRODUCTION
Heavy Metal – a genre of Rock music that developed over the late 60’s and early 70’s. Rooted in Blues and Psychedelic Rock, these were the stepping stones to create the genre. The bands that created this sound showcased a thick, massive sound by highly amplified distortion, extended and often unpredictable guitar solos and an emphasis on heavy beats and overall loudness. Pioneered by such bands as Led Zeppelin, Deep Purple and mainly the all mighty Black Sabbath.

Here in the Metal Steam Group we welcome you all. Fans of Heavy Metal, Thrash Metal, Power Metal, Industrial Metal, Black Metal, Death Metal, Alternative Metal, Gothic Metal, among many others. Every fan of Metal is welcomed here!

Metal - Very friendly server for all fans of metal
https://discord.gg/2Ep8vBsJnx

Steelcord - Music server dedicated to Heavy Metal in all its forms
https://discord.gg/SvhZKND

Umbra - A music server for fans of darker genres and extreme metal
https://discord.gg/898XbKt


Just as the title suggests, gothic rock/metal band Seraphim Shock are self-described as the ultimate Halloween band within the gothic rock scene. The band has toured with such bands as The Electric Hellfire Club, Type O Negative, Tiamat, Mayhem, Cradle of Filth and many more throughout their career. The been around since the mid-90’s and have released their first self-titled demo in 1994.

They released their first official album in 1997, Red Silk Vow under their own label Requiem Records. The follow up EP Nightmares for the Banished was released in 1999 under the same label. The records were re-release later on through indie metal label Sacrilege Records after the band fell into obscure within the goth scene due to high demand. The early works were praise by many for their gothic rock/metal hybrid sound which helped them cross over into the metal scene granted them tours with many prominent metal bands. Although however they never made the full transition into the metal world.

After a short hiatus, the band returned in 2004 with a whole new album, Halloween, Sex N’ Vegas. Along with a new revamped sound, the band added slight hints of industrial with a whole new horror punk coat while sticking to the original gothic rock sound. The album also included a different version of their song “Prey” which original came out in 1999 in the compilation Music from the Succubus Club. The compilation was inspired by the tabletop roll playing game Vampire the Masquerade.

Their last album was in 2010 with Black Hearts Revival was a somewhat return to form with their original sound. Since then the band has been active and touring with frontman Charles Edwards even appearing as bass player for The Electric Hellfire Club during the band’s reunion.

Steelcord - Music server dedicated to Heavy Metal in all its forms
https://discord.gg/SvhZKND

Umbra - A music server for fans of darker genres and extreme metal
https://discord.gg/898XbKt


Over the summer we have had many wonderful releases throughout metal and including the return of some legendary acts...

3teeth – Metalwar (industrial metal)
Over the years within a short time, 3teeth have been getting increasingly popular and have been one of the main industrial metal bands spearheading the industrial revival movement. Soon after the band gained the attention of progressive rock band Tool. This was when they brought them on tour some time back and thus crossover into the metal scene. This quickly caught the attention of a certain label, Century Media Records. Metawar was released in mid-May and is by far their heaviest album to date.

Slipknot – We are Not Your Kind (nu metal/groove metal)
After 5 long awaited years, Slipknot has returned with the band’s sixth album. This would also be the band’s first album with long time member Chris Fehn (#3) who was the metal act’s percussionist and backing vocalist due to unpaid royalties. The rest of the band continued forward with much anticipated hype from fans once word got out of a new record. We are Not Your Kind was released through Roadrunner Records in early August.

Tool – Fear Inoculum (progressive rock/metal)
The long awaited album from legendary act Tool had arrived this past August. It’s been 13 years since their 10,000 Days release and the wait is over. Released through Volcano/RCA (US) and Napalm Records (Europe), the album was sold in 2 separate editions, standard and the highly sought after limited deluxe edition that contained a 4-inch HD screen with original material, a 2-watt speaker that included an additional song and 36 page book.

Rammstein – Untitled (neue deutsche harte)
In the beginning of Summer we saw Rammstein’s come back after 10 long years. Top charting worldwide, the seventh studio album Untitled was released back in May.