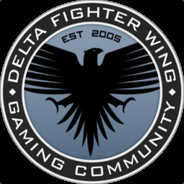 The year 2005 is the birth year of the community we now know as Delta Fighter Wing and the genesis of our story. Initially part of "DELTA: Counter-Terrorist Unit” a large group that actively partook in organized operations in BFV, an insurrection led by the clan's Gold (SpecOps) Team was the cause of the collapse of DELTA CTU. As the clan fell into a state of disrepair and ultimately to it's demise, the air platoon seceded from DELTA CTU and founded Delta Fighter Wing as an independent gaming clan on September 28, 2005.

We are a relaxed gaming community that specializes in different styles of aerial and space combat, but openly welcome applicants from all walks of life with a taste of almost any type of game and style. Some of our veteran members have grown from childhood to adulthood with us. Our community currently consists of a PC Division and Console Division and among our ranks range hardcore to casual players, both drunken and sober.

Miss out on the semi-annual meeting? No worries! Our re-cap is now on our YouTube channel and includes a convenient timeline index with major discussion points bookmarked in the description. Watch the video at https://www.youtube.com/watch?v=-SVZUUluQpg

Hey people of our lovely Steam Group we will be holding another meeting this week as the other one that was ment to be held got cancelled due to reason unforseen.

On 23 September 2016, we will be hosting our semi-annual community-wide meeting to discuss several changes to the Delta Fighter Wing Gaming Community, vote on the results from the supported games overhaul, and future endeavors. We require 100% participation to ensure we are moving in the direction of our members' consensus, and that we have heard everyone's voice in these matters.

The meeting will be held LIVE on our main twitch channel as well as the home page of our website. It will be hosted on our Discord at http://www.deltafighterwing.com/discord.

THIS IS A MANDATORY EVENT! ALL MEMBERS OF ALL DIVISIONS ARE REQUIRED TO PARTICIPATE IN THIS MEETING!(we're supa serious)

If any member is unable to attend this meeting for any reason, please notify any member of the DFW Administration ASAP.(Eagle, Synth or Foxx)

Friends, affiliates and allies of the Delta Fighter Wing Gaming Community are, as always, encouraged to join us and provide input and insight.

Toir Jun 15, 2012 @ 6:37pm
«ÐFW»BlööÐ here. One of these long ass years, I would need my "Purple Hearts" medal. Or taher A list of ; memories, storiers , other shit I did back in those years. Screenshots saved from way back then. Missed you guys, no homo. I need to share that list or bookmark some where. So that others or myself, even important people. Without that noted for me, I would never got the push I needed into gamming, internet, cool dudes hanging out on Teamspeak and playing some decicated gaming and other shit and giggles we pulled off. Help a brother out! :( The resson behind this, I can't remember jack shit yooooooooo!