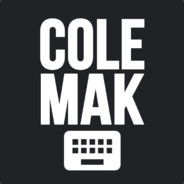 STEAM GROUP
Colemak COLEMAK
11
MEMBERS
0
IN-GAME
2
ONLINE
Founded
April 28, 2018
Language
English
Overview Discussions Events Members Comments
ABOUT Colemak
Colemak, pronounced /'ko:lmæk/ (Coal-Mac), is a keyboard layout designed for touch typing in English. It is designed to be a practical alternative to the QWERTY and Dvorak keyboard layouts. It was released on January 1, 2006.

What's wrong with the QWERTY layout?
- It places very rare letters in the best positions, so your fingers have to move a lot more.
- It suffers from a high same finger ratio that slows down typing and increases strain.
- It allows for very long sequences of letters with the same hand.
- It was designed to prevent the keys on a typewriter from sticking together, without any consideration to ergonomic or efficiency aspects.
- It was designed so the word "typewriter" could be typed on the top row to ease demonstrations.
- It suffers from an extremely high ratio of home-row-jumping sequences.

What's wrong with the Dvorak layout?
- Placing 'L' on the QWERTY 'P' position causes excessive strain on the right pinky.
- 'F' is on the QWERTY 'Y' position which is a difficult stretch on normal keyboards.
- 'I' is very frequent but isn't on the home position.
- 'R' is very frequent but isn't on the home row.
- The right hand does too much work.
- Even though the design principles are sound, the implementation isn't optimal because it was designed without the aid of computers.
- 'L' and 'S' form a frequent same-finger digraph on the right pinky.
- Some punctuation is less comfortable to type on Dvorak. This affects mainly programmers and advanced Unix users.