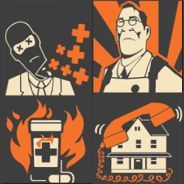 Achievement Box Group. its a group where you can try get help to finish your steam games achievements (like in tf2)

invite all ur friends to let us grow ;D hf

Early next week, we'll be shipping a new (huge!) update for Team Fortress 2. In addition to three unlockable weapons and thirty-five achievements for the Heavy, we've got a new game mode with five new arenas, a new Payload map focusing on more open spaces than Goldrush, and another popular community-made map. Check out this site for details.