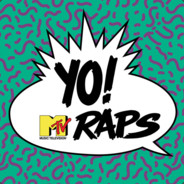 Introduction[http//Introduction]
Yo! MTV Raps is a two-hour American television music video program,
wich ran from August 1988 to August 1995. The program was the first Hip Hop Music Show
on the network, based on the originial MTV Europe show, aired one year earlier.
⠀
Yo! MTV Raps produced a lively mix of rap videos, interviews with rap starts,
live in studio performances on Fridays and Comedy. The show also yielded a Brazilian version
called Yo! MTV and broadcast by Mtv Brasil from 1990 to 2005.⠀
⠀
⠀

History[http//History]
In 1987 Ted Demme and Peter Doughtery developed the program for the then nascent MTV Europe.
The year after that Run-DMC hosted the pilot episode in the US.
Also featured in the pilot were DJ Jazzy Jeff & the Fresh Prince.
Eric B. & Rakim's video for the title track of the album Follow the Leader was the first video
to be shown on Yo! MTV Raps. The pilot was one of the highest rated programs to ever air on MTV at that point. Only the Video Music Awards and Live Aid received greater ratings.
⠀
⠀
Shinehead's "Chain Gang" was the first video to be shown during a regular season episode.
Meanwhile, Ice-T's "High Rollers" was the first video to be played during the weekday show.
The classic Yo! MTV Raps logo was created by early graffiti writer, Dr. Revolt.
⠀
⠀
⠀

Yo! MTV Raps and the spread of Hip-Hop[http//Yo%21+MTV+Raps+and+the+spread+of+Hip-Hop]
The advent of Yo! MTV Raps in the late 1980s was crucial to the spread of hip-hop around the world.
Through MTV Europe, MTV Asia, and MTV Latino, African-American and Latino style and sound was instantly
available to millions of people across the globe. This helped to create a worldwide appreciation and interest in the hip-hop scene,
which is something that was celebrated on the Yo! MTV Raps 20th anniversary.
⠀
⠀
⠀

The end of Yo![http//The+end+of+Yo%21]
Yo! MTV Raps had its series finale on August 17, 1995.
Numerous high-profile names in the world of hip-hop closed the show out with a freestyle rap session.
Salt-N-Pepa holds the distinction of appearing on the first (technically, the first episode to feature Fab 5 Freddy) and last episodes of Yo! MTV Raps.
⠀
⠀
From 1996 to 1999, MTV repackaged it as simply Yo! The repackaged version was far more stripped down. Yo! had a weekly slate of special guest hosts. For instance, Angie Martinez and Fatman Scoop served as its hosts. By 1998, Yo! had no guest hosts and became a one-hour program airing late Friday nights at 1 a.m. or 1:30 a.m. (Eastern Standard Time).
⠀
⠀
In 2000, MTV's outlet for hip-hop videos became Direct Effect, known since 2006 as Sucker Free. It airs three times a week around 7:00 PM (Eastern Standard Time). It is one of the few music video outlets for MTV besides its late-night/early-morning music video rotation hours, as MTV continues to focus on non-music video programming, especially reality television shows.
⠀
⠀
⠀
⠀