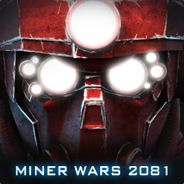 Miner Wars 2081 is a 6DOF action-survival space-shooter simulation-game set in the year 2081, 10 years after the destruction of all planetary objects in Solar System. The player controls a mining ship on an adventure across the Solar System.

As a player, you operate an advanced mining ship in an open-world asteroid belt area. You dig extensive tunnels, harvest ore, travel the solar system, fight enemies, and discover mysterious alien secrets. Gameplay is driven by an epic story and offers a choice of single/multi-player game, cooperative, or you against everyone.

The story will introduce you to many types of missions: rescue, exploration, revenge, base defense, theft, transportation, stealth, search and destroy, pure harvesting, racing, or just flying around and destroying everything you see.

It's time, The flash sale is here and likely the cheapest you'll see Miner Wars for a while, so get them while they're hot on Steam's Winter Sale!

Keen Software House would like to wish everyone a Merry Christmas!

This year has been great, and we feel like the world is ending this new year, perhaps our 2081 predicitons will be another end of the world you'll have to live through! Something to look forward to! A present! Enjoy~

yumadome Jul 29, 2013 @ 8:49pm
I joined as a beta tester back in Oct 2010 when they offered it at a discount for joining early.
My account on the website shows I have some in game cash from early mining, but it won't let me download the game without purchasing.
I just saw the notice below and thought that was the answer... but when I followed it I found that it doesn't give me a link. How can I get this fixed?