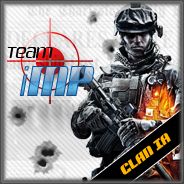 Imperial Alliance was founded in 2001 on Battle.net by IA-Lantoka, with a focus on StarCraft and its expansion, Brood War. Eventually branching out to other B.Net games, such as Diablo II: Lord of Destruction and WarCraft III: The Frozen Throne, the clan focused heavily on balancing casual gaming with competitive gaming, excelling in Brood War and competing against some of the best teams.

B.Net grew older and the numbers began to drop, forcing IA to eventually shut its doors. After only a couple years inactive, with the impending release of SC2, momentum was brought back to IA and the clan begin to reform. New games bring new opportunities and for the first time in its history, IA has expanded onto Steam. With a Modern Warfare 2 division and support for both Team Fortress 2, Counter Strike 1.6 and Counter Strike Source, there will be plenty of room for FPS players in the new IA.

With the same leader at the top and many returning members mixed with some new ones, IA is looking to climb back to the top of the proverbial mountain. We have expanded into new games and are always looking for a match, regardless of your skill level or ours. We are a friendly, multi-gaming clan with an emphasis on teamwork, commitment and passion, and if you're interested in joining, just ask someone.

Thanks for stopping by. Oh, and welcome to Clan IA and Team Imperial.

A number of us have reinstalled MW2 and are having a blast playing. You should download it and join us!

Make sure y'all are checking the forum for updates regarding our BF3 server(s).

On the note of servers, we now have a private server for use of scrims, inhouses, and squad versus squad matches (see forum for your squad assignment). We also have plans to purchase an additional 48 man server for Back to Karkand 24/7.

We are also considering starting a TWL team, but we're currently held back in looking for someone to lead that team, someone both experienced, skillful, and active.

Again, make sure y'all are checking the forum as much as possible. There are lots of changes occuring very rapidly given the success of our BF3 server and the division.