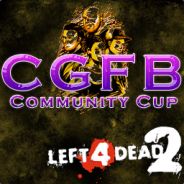 This group was created solely for many upcoming tournaments from the CGFB staff and the awesome help of the L4D2TV.net staff!

Just letting you all know that the 3rd CGFB cup will commence on Monday 6th August and registration will finish on Friday 3rd, thus there is less than 2 weeks left for interested parties to sign up via this E4D forum thread: http://earth4dead.com/index.php?option=com_kunena&func=view&catid=29&id=534&limit=6&limitstart=6&Itemid=69#564


I will say it again to be clear: the 2 match win rule (where 2 wins for any player who has competed in any top-level competition rules them out of competing in CGFB competition) is in effect. This includes ANY AND ALL competitions such as fragpipe, PWG, ESL and other cups (defwins do not count).

We will try to be as thorough as we can in the process of checking the records of teams and players. However, if an ineligible player, whether they themselves are knowingly or unknowingly ineligible, ends up playing in a cup match and is later found out to be ineligible, their team will incur default losses for all matches up to that point and the player will be removed from the cup. If there is more than one ineligible player on the same team competing in a match, the team will be DISQUALIFIED from the cup with no chance of appeal.

To spare any confusion or bitching in the future, I am sure any player can remember winning as little as 2 matches in all the competitions they've competed in, thus making the necessary rule a simple one. If a player is found to be ineligible then there is no point in trying to dispute or bicker with admins about the decision.

So my advice to anyone who has actually entered such competitions before is to be 100% honest about your achievements and spare your team the trouble of eventually being caught out. We've provided this warning because by the time the cup starts, there will be ZERO TOLERANCE if offending parties are found to have broken the 2-match win rule.

Ronbrug Mar 14, 2012 @ 11:37am
"Hello. I'm looking for players to form a new team. Of course it will take practice and the first tmatches will surely be complicated but it is all part of a learning process. Add me if you are interested in playing with friendly guys in a good environment."
< >
VIEW ALL (257)
GROUP MEMBERS