DwarfHeim is a class-based co-op RTS for 1-3 players. Survive against endless waves of trolls either alone or with friends, defeat enemy clans in Multiplayer Conquest, or build your Dwarven settlement in Sandbox mode.
-30%
$24.99
$17.49
Visit the Store Page
Early Access Game
Get instant access and start playing; get involved with this game as it develops. Learn more.
Most popular community and official content for the past week.  (?)
PATCH 09: June
8:01am
Patch 9 - v0.10.9.4
Patch 9 has just launched! With this patch we've spent time on working on improving the initial menu UI as well as improved optimized the game for lower end PC's.

In addition! It's the season of SUMMER, so keep your eyes open for maybe a nice little discount to bring your friends into the game, either through buying it on sale or inviting them to play through FRIEND-PASS, and watch your favorite DH streamers play on Twitch to earn the Trollhunter Thane Tools cosmetics! 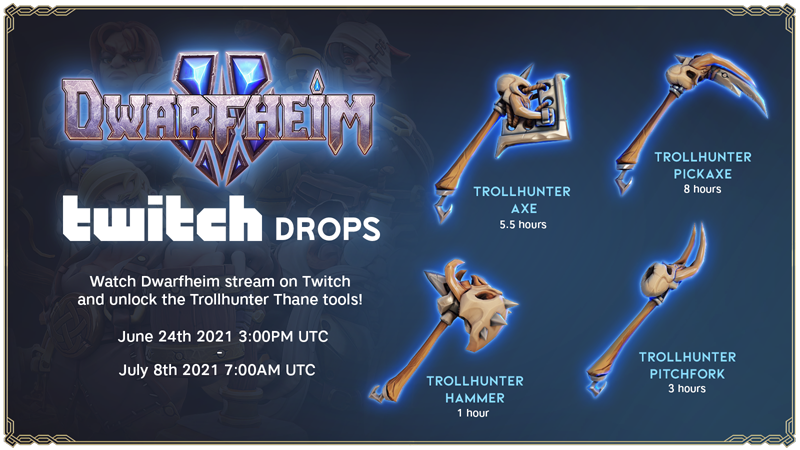 Hope you guys enjoy the changes and join our discord to share your feedback with us: OFFICIAL DISCORD[www.discord.gg]

Features
Lobby, Class & Thane selection rework
- Removed the need to select the number of players in the lobby before starting a queue
- New mechanic for selecting class after everyone has connected to the game server
- New UI for Thane selection

Graphic quality settings update
Graphics settings for Low and Very Low have significantly reduced memory usage.
This should help those below the recommended hardware specs with stability.

Other
- Added a new set of cosmetic tools for Thanes, unlockable through watching streamers on Twitch!

DwarfHeim
14
1
Default behavior of builders and miners
Hello! Dwarfs are very warlike people. I don't argue with that. BUT! It is very annoying that the aggression mode is set by default for builders and miners. Because of this, production chains can break due to any random monster that just ran by.
6

KVinS
May 12 @ 11:21am
General Discussions
Whats happening next?
Seeing this game the first time around, I thought wow, I've played a lot of games that I really enjoy, but I have never seen something that could potentially capture everything I have ever wanted in a game all in one. After having played the beta, I had high hopes that when it gets ironed out, it will be nice, but then I saw the PvP mode added, and new damn well, that if any focus goes into that, this will split the development and the player base, and here we are. So what could have been a large scaled ...
4

IHaveNoMercy
May 25 @ 9:55am
General Discussions
Dispensers
Any one else think there should be a dispenser for items for the miner that way the resources you have gathered earlier can be used for other stuff instead of sitting there
10

Remember, Next Thursday at 16:00 CET we're holding a Dev Q&A on Twitch as well as showing some of our upcoming features for the next patch (releasing on the 24th), hope to see you there!

Features
Matchmaker region setting
Added an info panel about the ping times to different server regions, as well as a setting to change region from Auto to specific.
Panel has to be enabled in the game options menu.

Improvements
Improved lighting and shadows.
Different Ambience SFX for the different maps.
New SFX for when Forges and Ore Sorters are stuck.
Mine-block "box select" and "double right-click" will now un-mark blocks if the initial block selected was marked already.
Box select is now consistently marking or un-marking all blocks.

Known issues
Local-hosting might not work with certain VPNs.
Skirmish will not work immediately after playing one of the tutorials. Game restart is required.
Sounds for Thane levelups plays twice.
Allowed building placement positions are inconsistent with fow restrictions indicated on the building grid.
Chat sometimes locks up. ```

Balancing
Buildings
The pit
Increased build time from 40 to 50

DwarfHeim
34
0
Bugs and problems found in the game
At the beginning, first thing I want to raised is the localization, I found October last year, one of your staff said the Chinese language will be added in to future localization plan, and until now, it's already April of the next year, please make it! Then, many many many many bugs! 1.Monsters will automatically across the wall and gate when they were blocked for too long. 2.One of the big monster which throw stones sometimes will stop and without any motion stay in the place, however, my worriers still ...
7

lolohhhh123
May 3 @ 7:01am
General Discussions
Join Friend-pass lobby with the full version of the game
Hi, We try to play a 3 players game, with one of th player not having the game. We previously make it work with just one of us owning the game, but since, one player also bought it. If one of us, create a friend-pass lobby, the other with the "full" version of the game is unable to join (no error message, it seems to be joinning another lobby : doesn't see the "friend-pass version" player, ready status is not updated, can't pick a class, etc.... I would thought that's not ax expected behaviour, as owni...
2 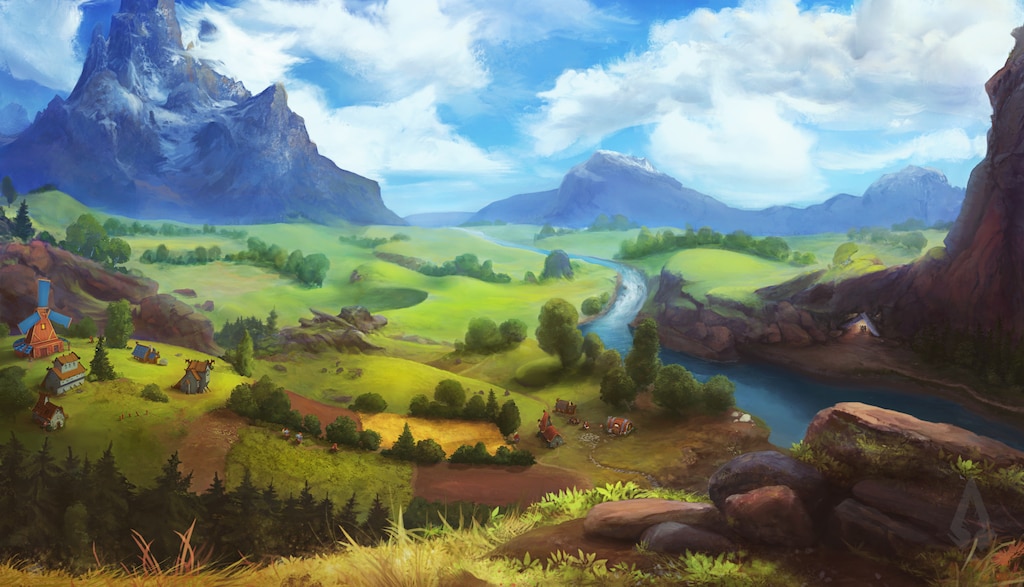 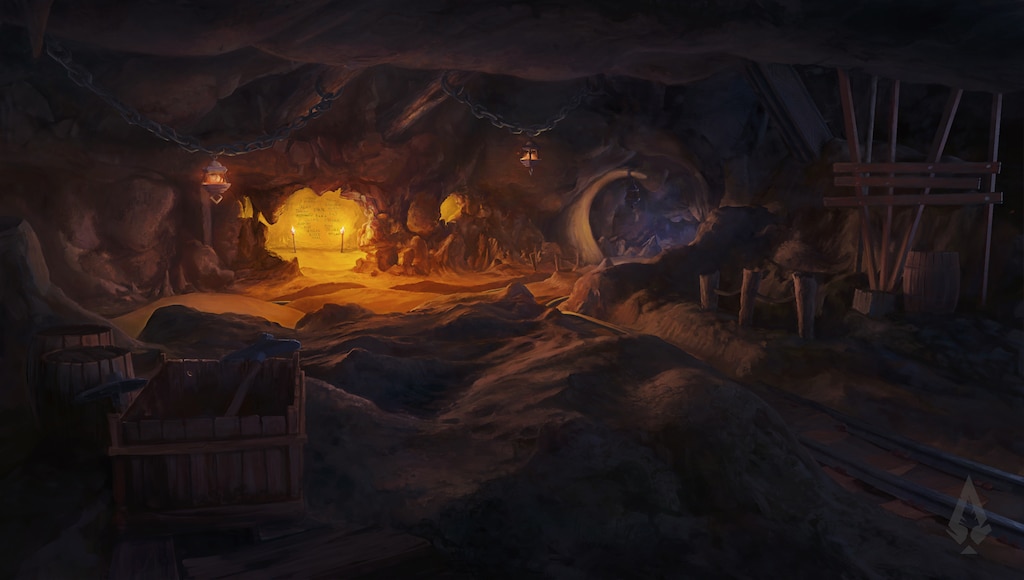 2
2
The mines of Pith - Official Illustration

Desorniph
View all guides
PATCH 8
May 27
Patch 8 - v0.10.8.4
Hi Everyone, another patch, fresh from the steamy offices of Pineleaf Studio is ready for you.

Join us in testing the new features and help us by reviewing the game here on steam, or sharing your feedback directly with us on our community discord: http://www.Discord.gg/DwarfHeim

In addition to the patch, our French community will hold a show match at the Stunfest festival tomorrow at 21:00, join the discord to learn more and tune in to earn Twitch Drops during the coming weekend.

Also remember to join us in the coming Community Night, next Thursday!

Features
Local hosting
Premade games will now be hosted by the party leaders.
This can provide a better experience for players in the same country.
It's recommended that players meeting the recommended system requirements host the games.
(Friendpass is still using hosted servers for the time being).

Save and Load (Singleplayer)
New save game functionality that can be used in Singleplayer games for the Sandbox and Survival game modes.
Saved games can be loaded in the main menu.
(Note: Save files may become incompatible with later game updates).

AI Upgrade
AI now responds better to attacks both in OW and UW.
AI on medium and hard gets increased food income from farming.
AI on offense will now go through mineshafts after killing all enemy structures in that level.
Fixed woodcutting Builders going idle when no trees were found nearby.
Fixed a couple of issues with buildings not being rebuilt.
Reworked difficulties and added a hard difficulty.
Reworked the passive resource income for the miner AI for each difficulty.

Fixed some issues with the map layout on Cliffside (could build on lava etc.).
Fixed an issue where new units sometimes spawned inside neighbor buildings.
Fixed an issue with a spawn waypoint being visually stuck after deleting a building.
Building Grid clips through building ghosts from certain angles.

Mercenary
Increased food cost from 50 to 60.

Berserker
Increased gold cost from 50 to 60.

Skirmisher
Increased gold cost from 50 to 60.

Cannoneer
Increased gold cost from 50 to 60. 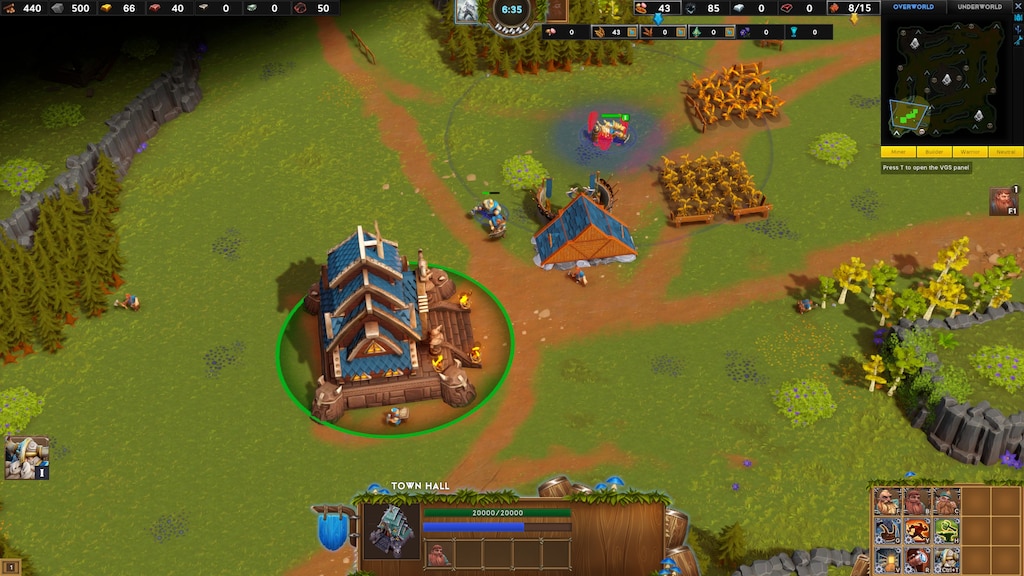 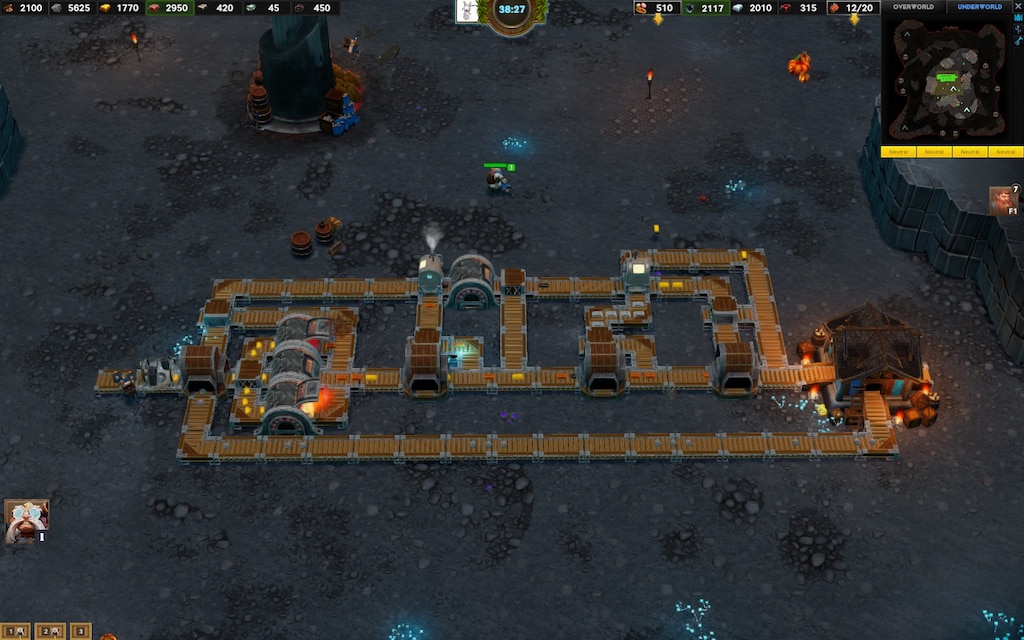 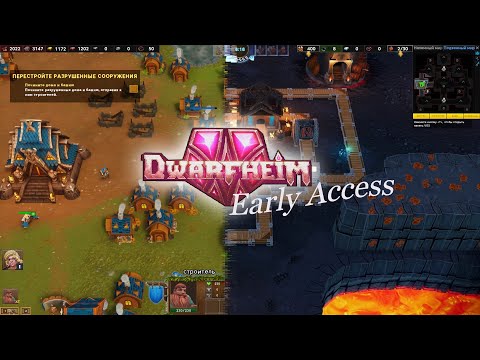 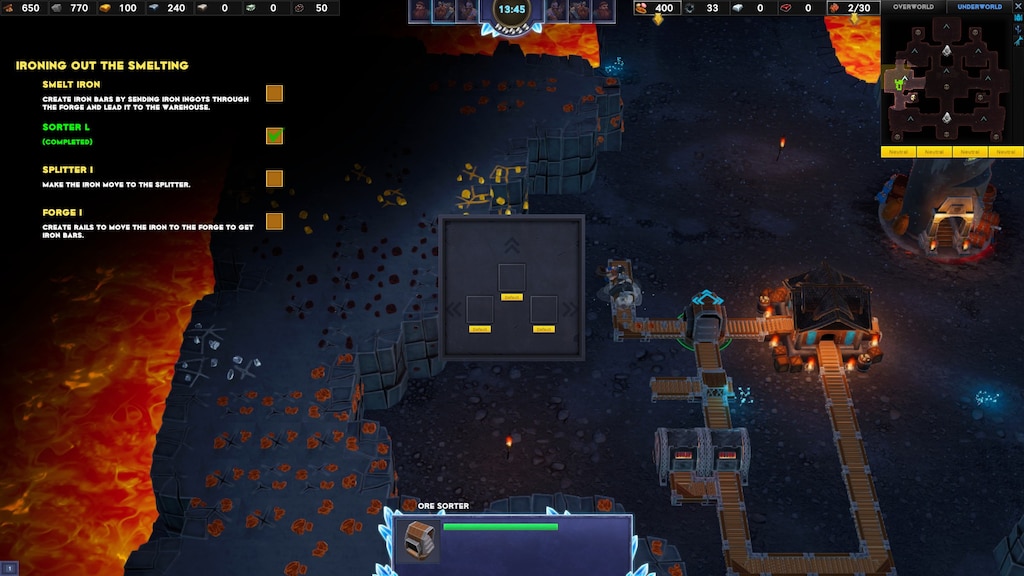 A beginners guide to Dwarfheim Conquest v0.10.0.9
How to play the Arbalest build with every class. 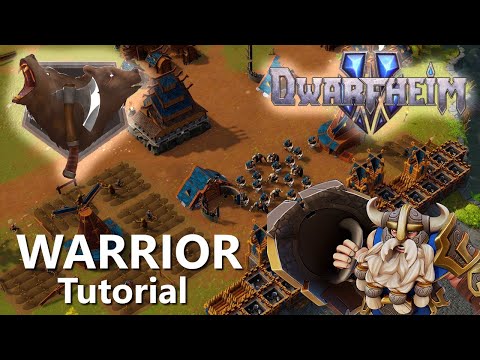 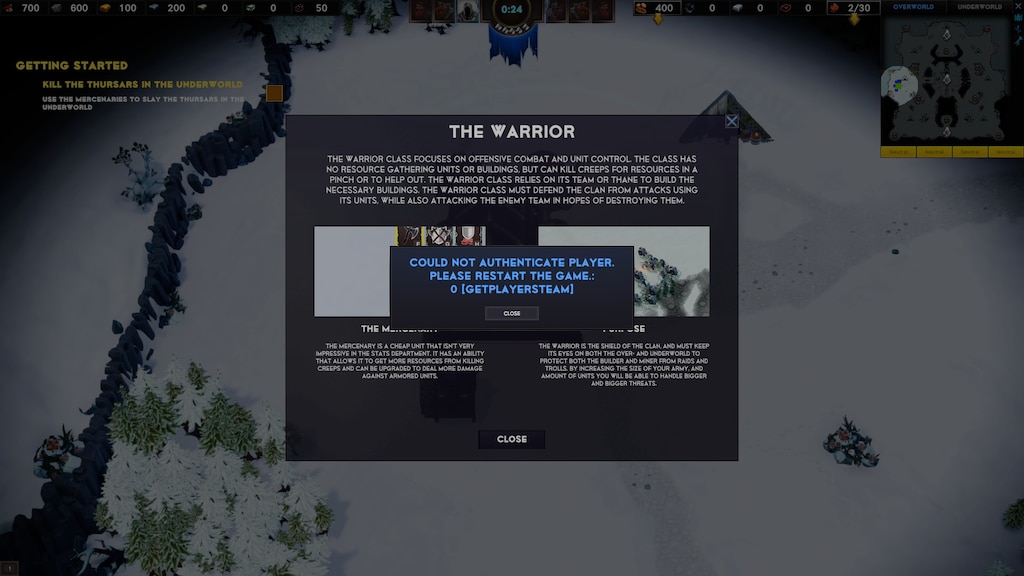 0
0
This is a simple all purpose mine setup with one crusher. 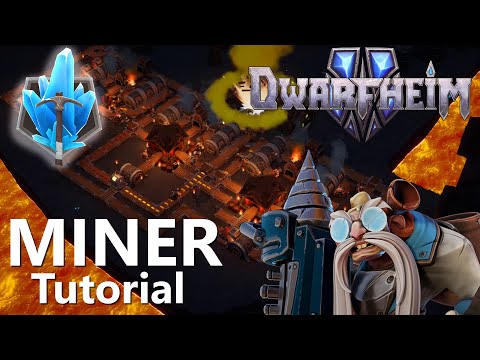 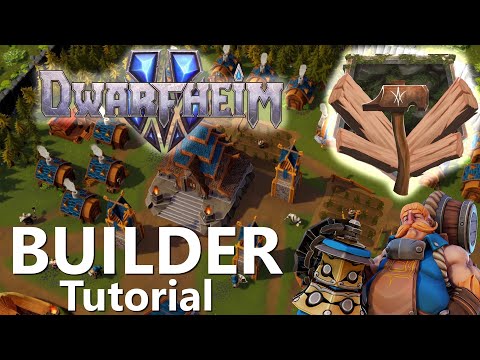 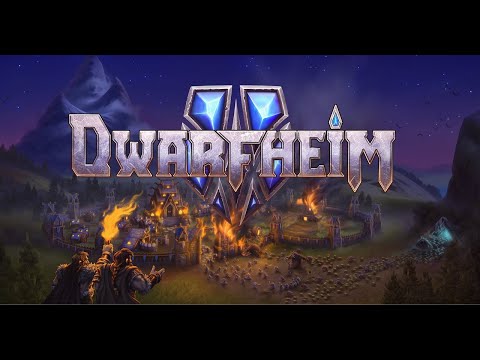