A visually stunning RTS where players build the ultimate battlecruiser to strategically attack and destroy enemy warships. Step aboard this indie war game for minimalist design, explosive gameplay, and an addictive soundtrack. And nukes! Never forget the nukes.
$5.99
Visit the Store Page
Most popular community and official content for the past week.  (?)
Skirmish Game Mode
Mar 2
Skirmish Mode
In a skirmish you decide: 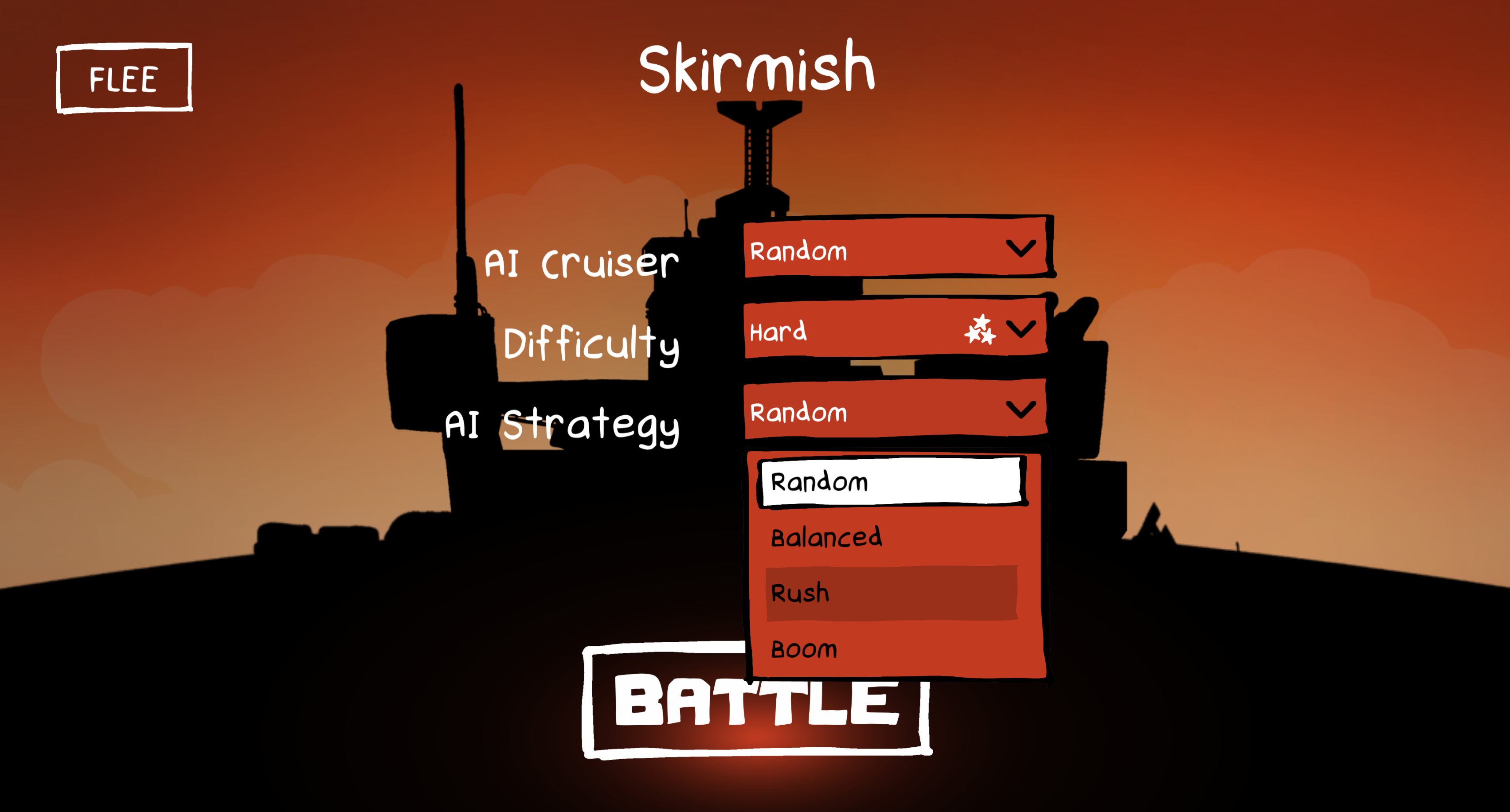 Unlike in the campaign you won't know which strategy the AI will use! 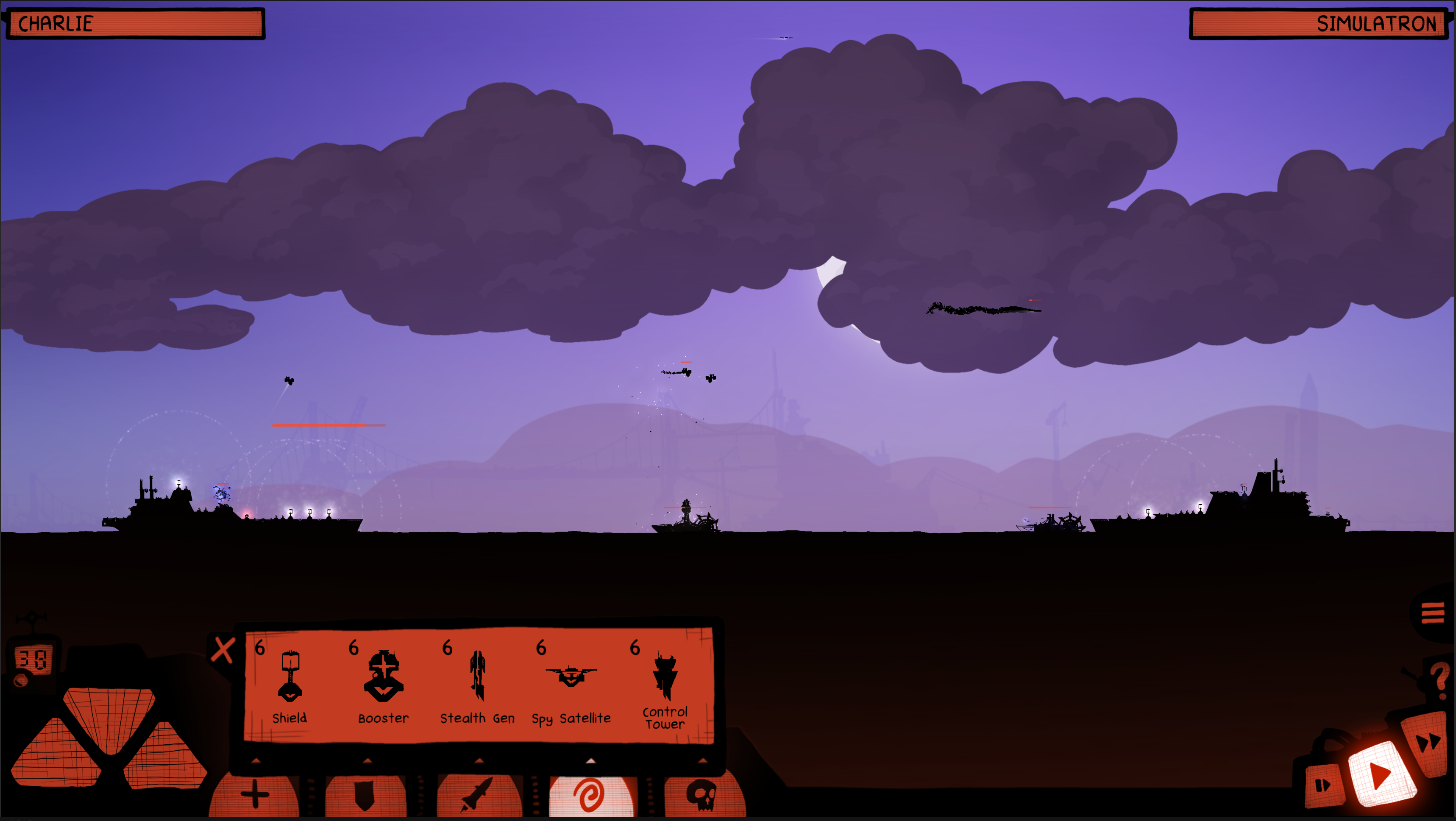 Battlecruisers
32
5
Some Feedback!
Lovely little game. Though completed the game on hard in 99 mins, kinda wish there was like an endless mode to add a bit more replayability. Air craft are busted strong, like a lot off the matches just ended with me building all builder slots then build one air factory and just building bombers, ship AA does nothing vs bombers. so surgest ship AA should be buffed a bit more. fighters are good but if ai doesn't build fighters as it's first thing, it's over. Some off the build times on a couple off t...
23

ChibiFenrir
Feb 20 @ 6:41am
General Discussions
Gunboat Exploit
I completed the whole game just spamming gunboats in the beginning of the match. Won every time. The gunboat destroys the counter turrets, and the AI desperately recreates the turret, allowing me all the time in the world to just build what ever I desire....
14

Recommended
3.5 hrs on record
Product received for free
Good, simple fun.
This review contains no story spoilers.
-Overview-
Battlecruisers is a short but enjoyable strategy game with a great visual style, a nice soundtrack and decent gameplay. There are some minor issues, but overall, the game is a good experience.

-Gameplay-
Combat:
Controlling one of several cruisers, players must build various defences such as turrets and shields, weapons such as rocket launchers, and unit-producing structures such as a naval yard on the deck of their ship using builder drones, which are indestructible, but limited in number. These drones are the game's only resource, and their management makes up the bulk of players' responsibilities. Weapons, defences and production structures act autonomously, as do the units produced. As such, choosing what to build and how many drones to assign to it is the core of Battlecruisers.

Though Battlecruisers does offer an enjoyable, casual gameplay experience, I did notice one problem: due to unfinished structures being very weak and in the path of enemy fire, it can be very difficult to recover from a disadvantage; once the enemy has penetrated your defences, they can just keep attacking without pause, preventing you from building new structures or otherwise countering their assault, while they continue to build. The lack of more precise tools for drone management also factors into this; one can tell all drones to work on something, or just half of them (sometimes), but cannot, for example, order five to work on maintaining defences, three to build a new structure and the remainder to slowly build a large structure in the background. This means that it can be impossible to build new structures or units while also maintaining the defences that are required to keep said structures safe. In my view, the perfect solution to this would be to have a counter on each unfinished structure with arrows to easily select how many drones should be allocated to it, in addition to the current system.
https://steamcommunity.com/sharedfiles/filedetails/?id=2408907212
This snowball effect can also be turned on the enemy, with devastating results. In the game's later stages, I realised I could demolish any enemy by forgoing caution and devoting resources to building a powerful offensive unit right away, thus preventing the enemy from building anything on the front of their ship and forcing them to allocate drones to constant repairs. I tested this on the game's final level, and was able to win in less than two minutes on the hardest difficulty. Usable abilities would be a good way to counter these stalemates, but the game only features one, and it doesn't come in until quite late in the story.

Progression & Missions:
Battlecruisers features only story mode, which is comprised of 25 levels that can be replayed while retaining all previously earned upgrades. Along the way, players unlock new cruisers, units, weapons and defences, with their own advantages and disadvantages. I appreciate that not all cruisers earned are a straight upgrade from the one before, but a choice to be made based on playstyle and preference.

-Story-
The story of Battlecruisers is a brief but goofy and amusing one told via encounters before each level, in which our robotic protagonist trades comments with the captain they're about to face in battle. Essentially, the protagonist stole a cruiser for a joyride and winds up battling the forces of the superpower who owned it.
https://steamcommunity.com/sharedfiles/filedetails/?id=2407925725
-Technical-

Visuals:
Battlecruisers features a great silhouetted art style that is a pleasure to look at. Animations are good, as are environmental effects such as smoke, waves and water splashes.

Performance:
Using the specs listed above, the game ran at a constant 60fps with no drops. There are no graphics settings.

Audio:
I was surprised by the high quality of Battlecruisers' soundtrack – it's very relaxing. Sound effects are decent, though they start to grate quite badly when the game is played on fast-forward.

Bugs:
None to report.

-Summary-
Battlecruisers is an enjoyable game whose strengths far outweigh its flaws, and it's a worthwhile experience, if a short one.

If you like long, detailed reviews, check out our curator page, Devils in the Detail. 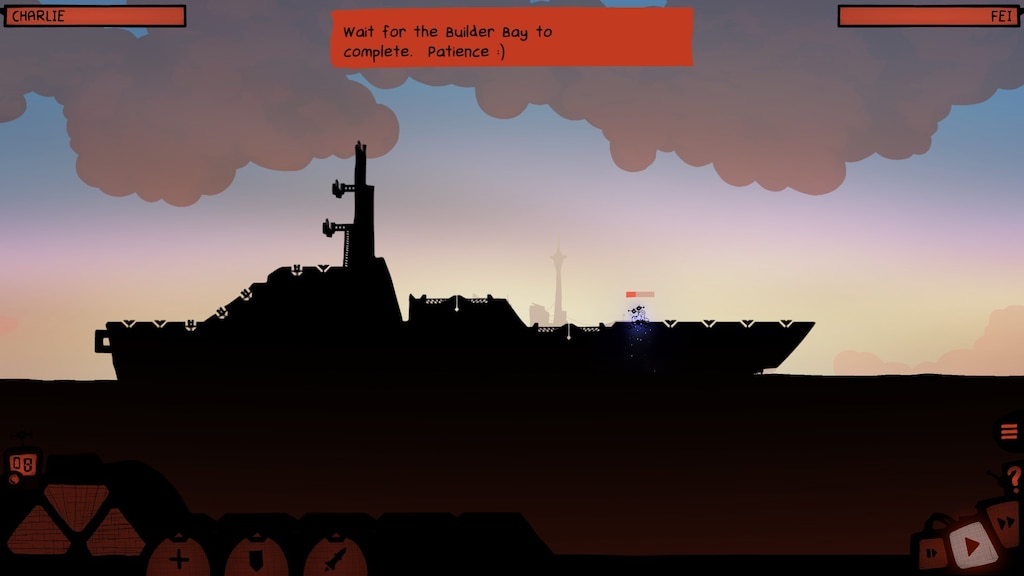 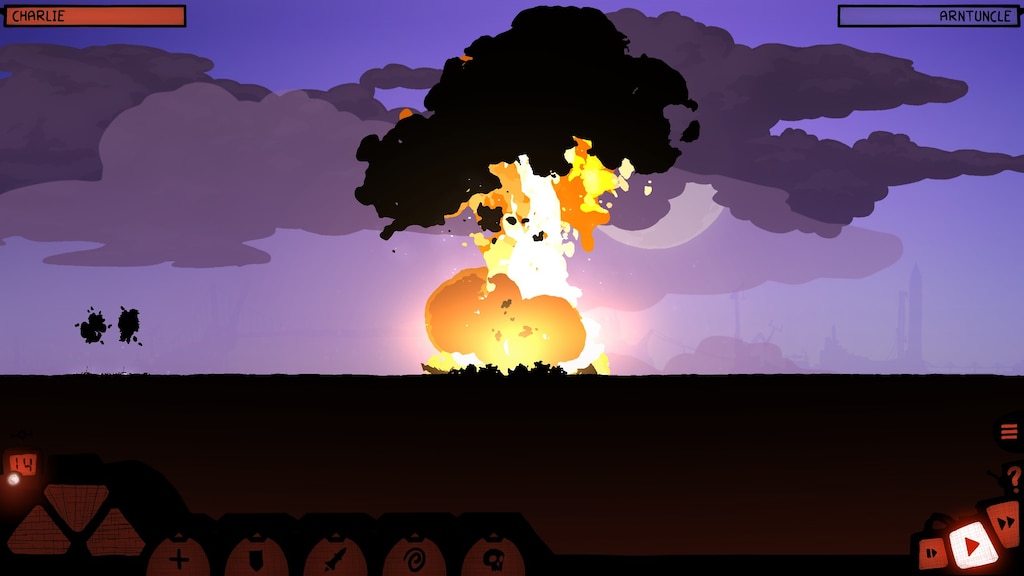 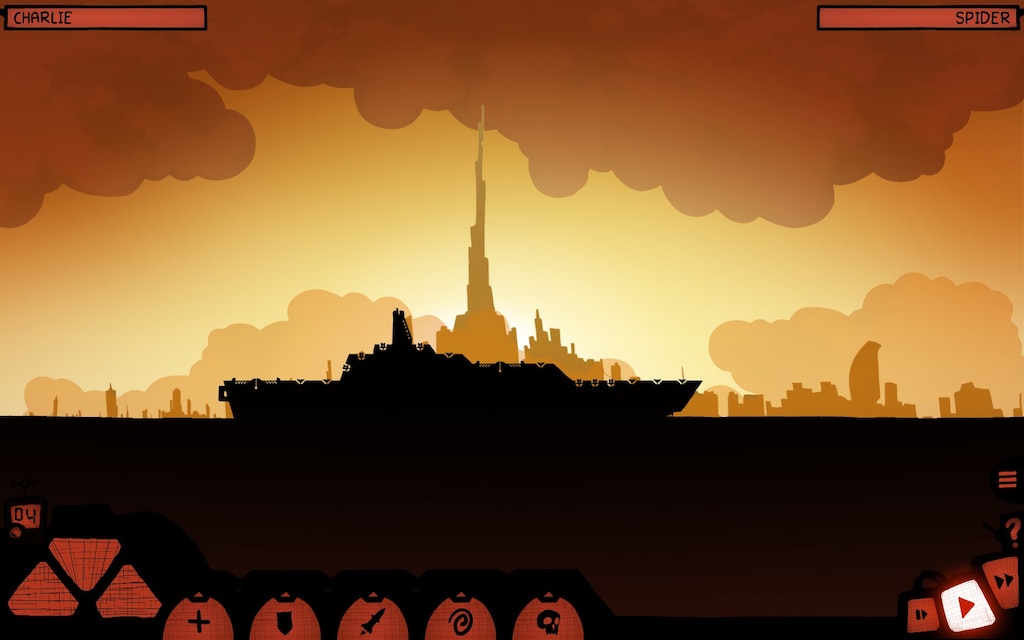 0
0
I love this silhouetted art style. 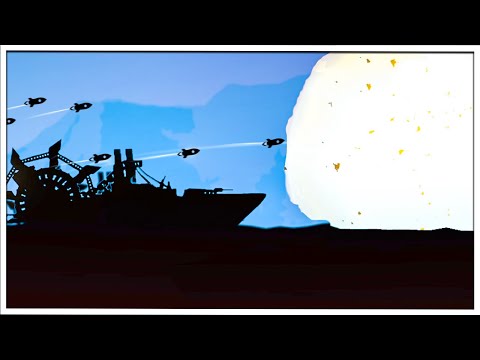 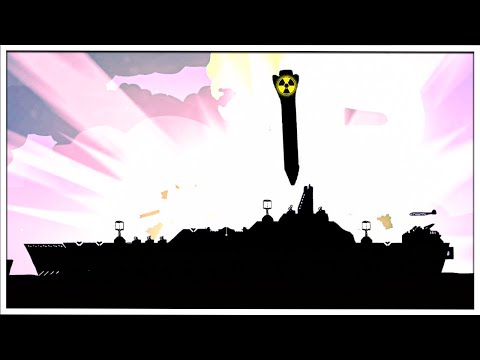 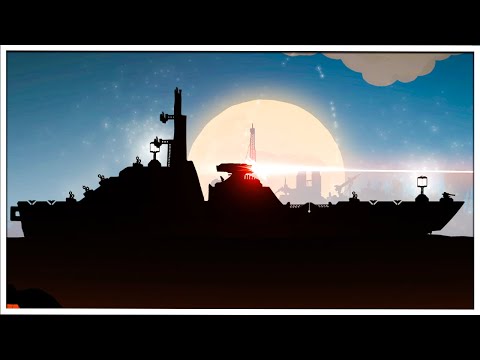 0
0
1440x Desktop Wallpaper with no watermarks 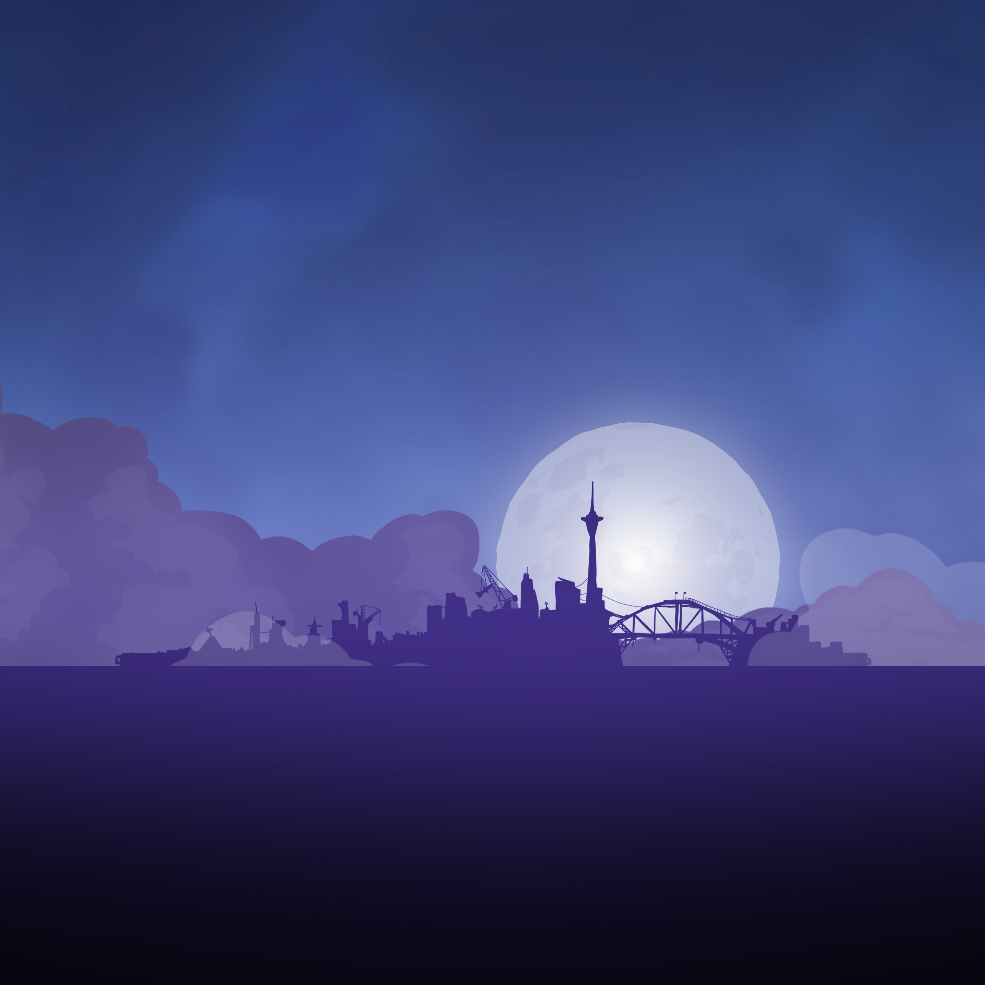 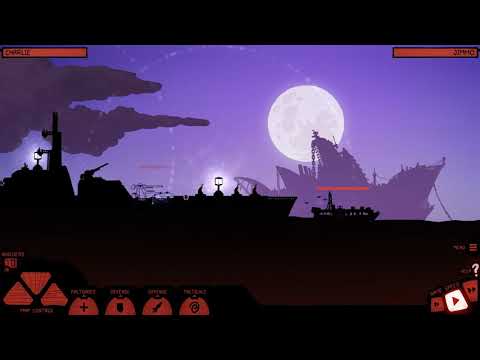 YT NotAGameAddict
View videos
macOS or iOS Version?
Any plan to release for macOS or iOS?
3

Alone1i
Feb 27 @ 7:28am
General Discussions
Feedback after finishing the game on hard
Nice game, I like Forts and this felt like Forts with ships without having to build the ship itself apart from factories. Some things I think you could do to improve the game. * A way to counter Spy sattelites, the jammer vs spy gameplay feels pointless. There is no reason to build a jammer since your enemy just builds a spy and then it does nothing unless you manage to destroy the spy factory and that is pretty hard to do without manual targeting. Maybe let us build something that shoots down the spies?...
2

Jonkenden
Feb 28 @ 12:46am
General Discussions
Targetting bug.
Overall, i've found the game to be very fun, if a bit on the short side. There is one issue however, and that is the targetting mechanic, it's extremely buggy, especially when dealing with the lascannon. On one ocassion, the lascannon was ignoring any targets set, and was either using the default aiming, or had gotten stuck and kept firing at an air factory i had targetted earlier. I've found this issue to mainly occur after i target naval factories (and yes, the lascannon was low enough to hit them) On...
7 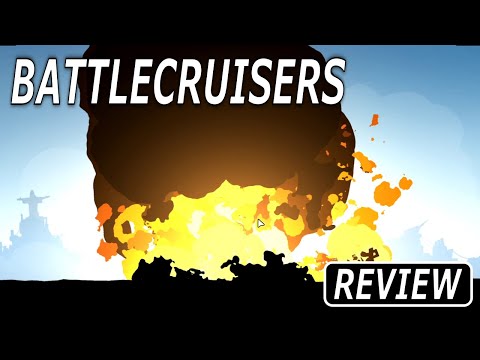