An online and local party game of teamwork and betrayal for 4-15 players...in space!
$4.99
Visit the Store Page
Most popular community and official content for the past week.  (?)
Vent Cleaning & v2021.6.30 Patch Notes
Jul 7
Hi Crewmates!

Quick post to let you know about the changes in the latest patch for version 2021.6.30.

New additions:
Bug fixes:
Ongoing bugs:
And if you're a fan of grabbing physical editions of the game on console, pre-orders for it has just opened up!! (Release date for the game on Xbox and PlayStation has NOT been announced yet.) It comes with a ton of goodies with 3 different editions - Ejected, Crewmate, and Impostor! {LINK REMOVED}Check them out and pre-order here​. 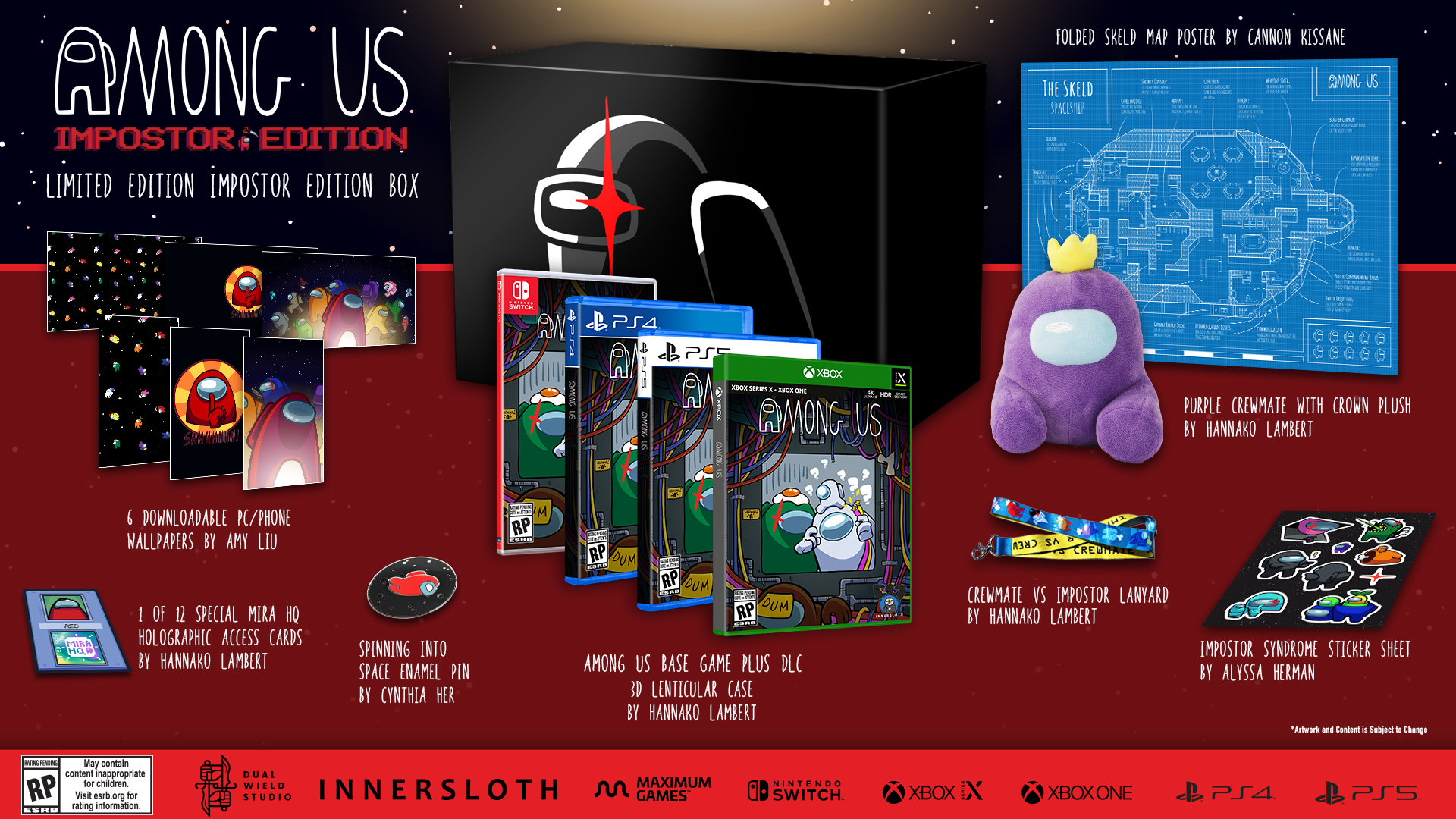 That’s it for now! Don’t forget the roadmap[innersloth.itch.io] is the place to go if you’re interested in what we’re working on next, and check out our updated mod[innersloth.com] and fan creation policy[innersloth.com] if that’s something you were curious about.

See you next time!

Recommended
89.0 hrs on record
horrible game, i played so much that my wife took the kids and left me. it also messed up my humor so much that i cant recover from it ever. 10/10 would not let near me.

angiesalads
23 products in account
0
Parental permission its a JOKE ????
I paid for this game with my PayPal account now they ask me to give theme some private info for my credit card number and 50 cent to prove I am parent.If you don't enough the steam registered account and email . I want my money back or just reset all this nonsense what i need to go and leave my credit card info on some fishy site. Very disappointed just collecting all the info !!!!!...
9

Recommended
147.0 hrs on record
i love amon us 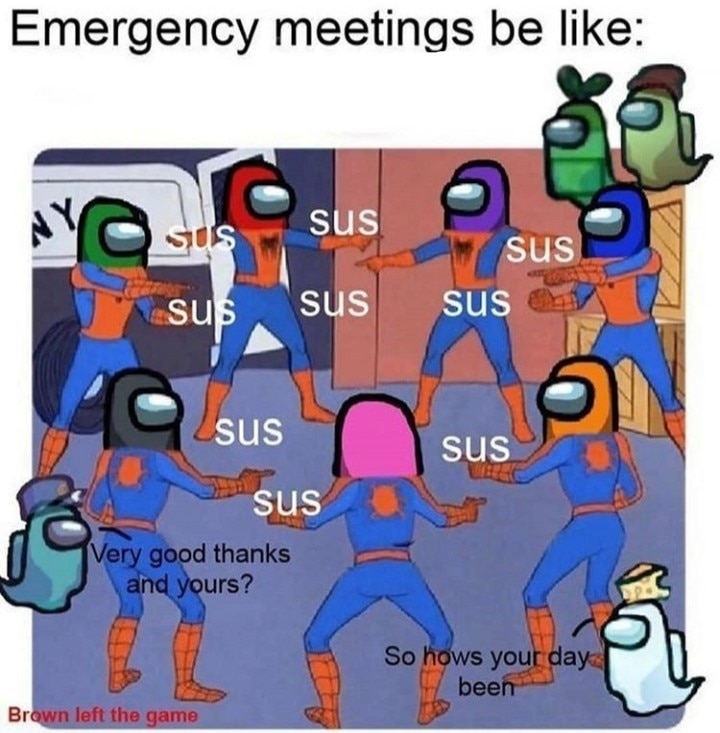 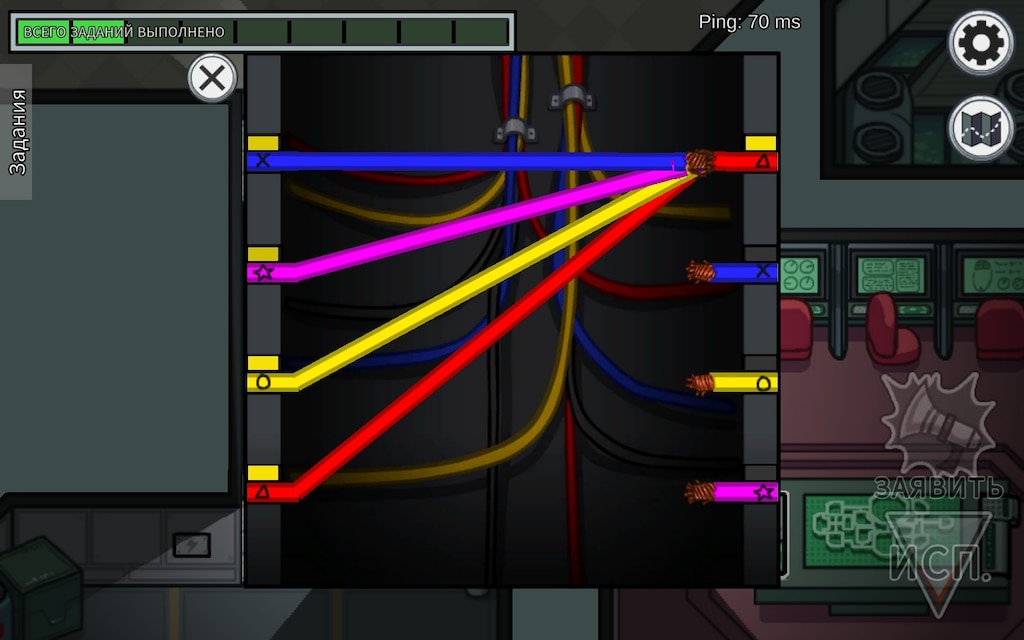 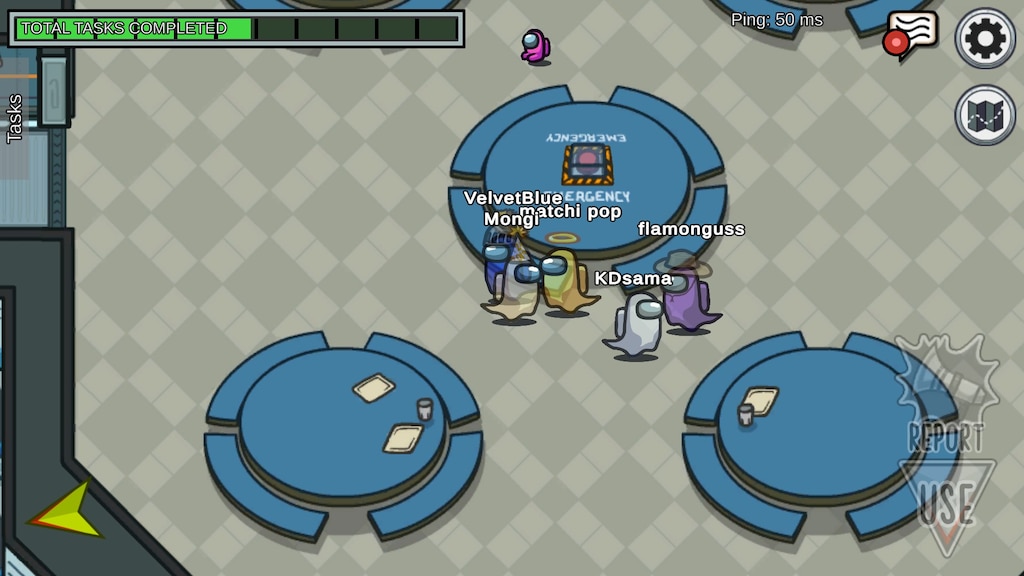 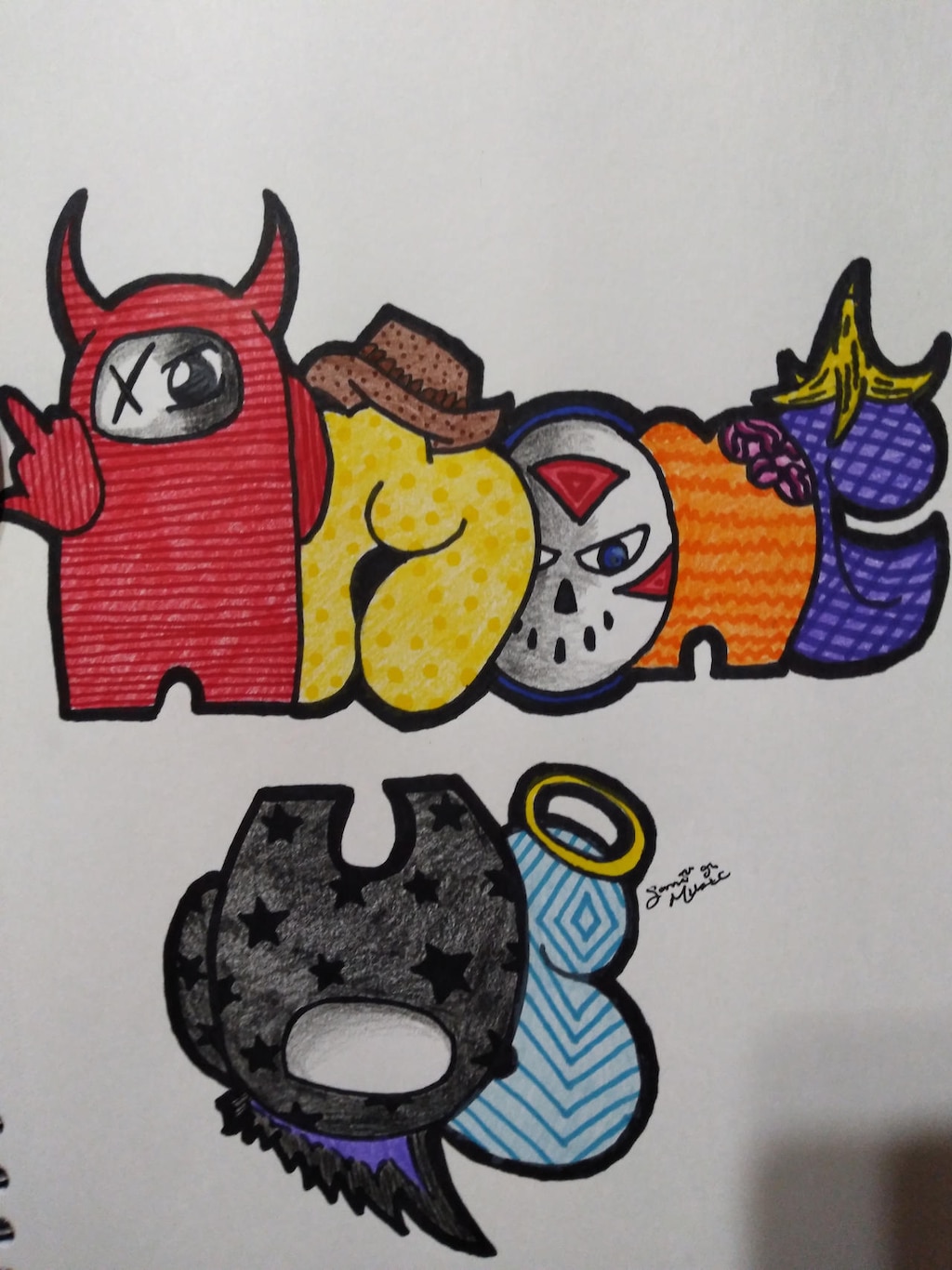 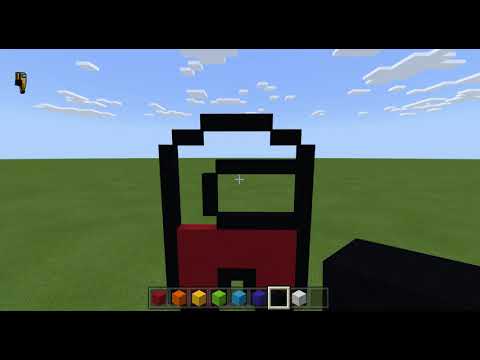 1
14
How to make among us in Minecraft 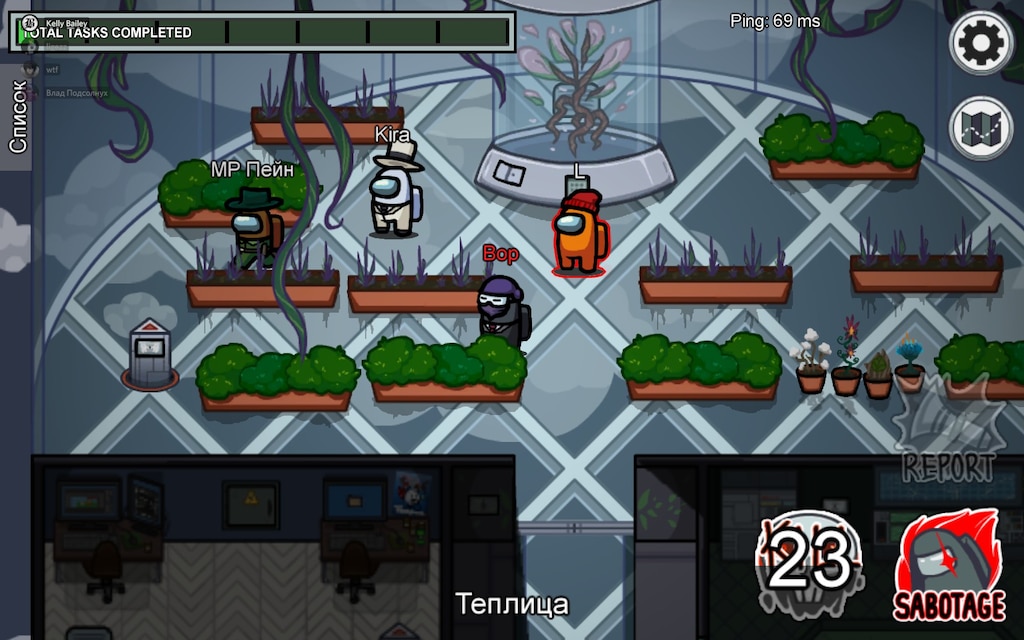 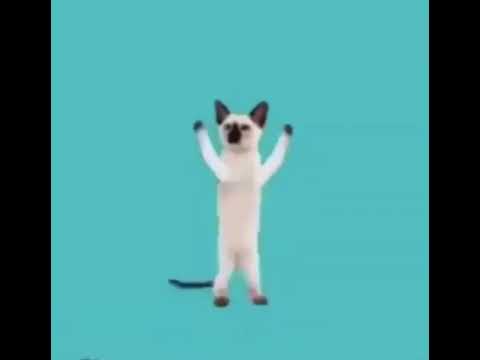 Recommended
1.6 hrs on record
Played it once or twice, its a chaotic game for sure. Seeing the player count go down though, end of a big meme era. 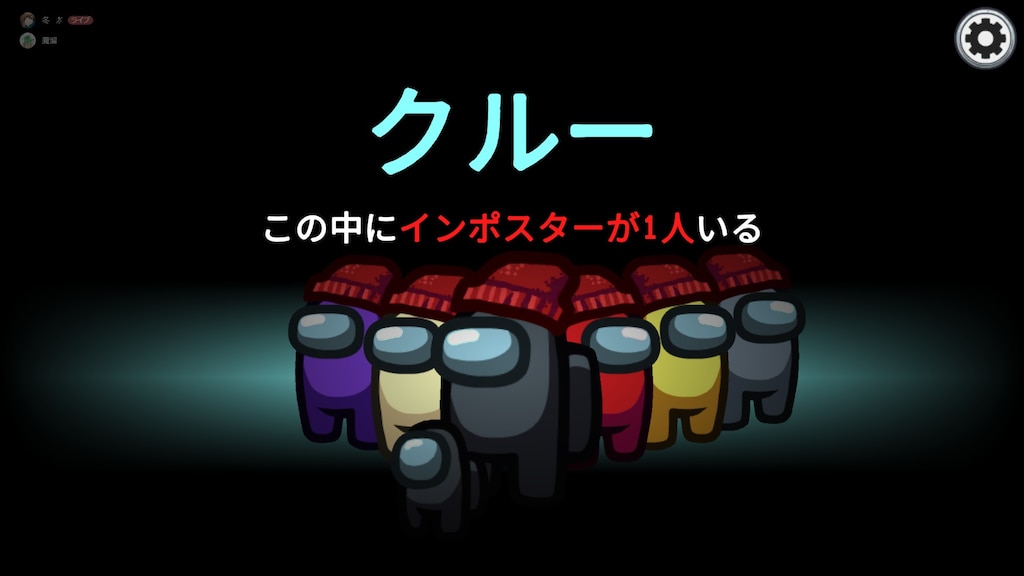 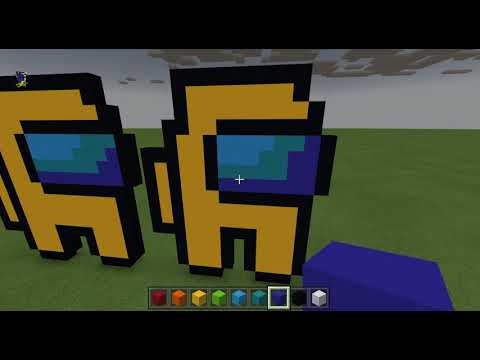 0
0
How to make among us in Minecraft 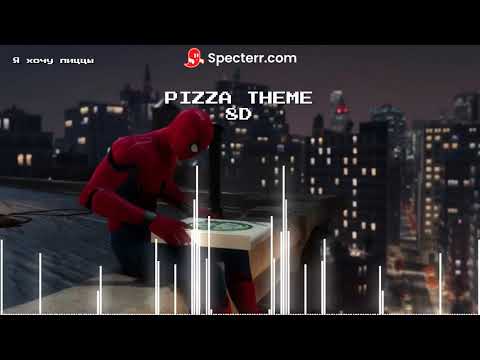 How to be a master of detectives in Among Us
Would you like to find the ruthless impostors? Are you tired of seeing your friends dying every round? Want the impostors to be scared of you? Then this guide is perfect for you! I will introduce you to a few tips to get into the Detective's job and the wa...

vasevgvl
View all guides
Hackers banning people for hacking
me and some freinds were playing and caught someone hacking. before we could report or even get a meeting called we not kicked out saying we were banned for hacking. Thats some ♥♥♥♥♥♥♥♥
11

Luna_Knight
1 hour ago
General Discussions
This game is garbage
It was fun for like on day before all the toxic stans invaded and made the game literally unplayable because there will always be a dumbass who will vote you for no reason, and the whole "Just play with friends" is ♥♥♥♥♥♥♥♥, this game's core feature is online multiplayer, so stfu....
17

DogWithλShotgun
Jul 29 @ 7:01am
General Discussions
Among Us’ 3rd Birthday & 15 Player Lobbies Out Now!
Jun 15
IT’S AMONG US’ BIRTHDAYYYYYYYYYYYY!

On June 15th 2018, we released Among Us... as a local, mobile only game with just a few players. And now in 2021, not only is the game out on PC, Nintendo Switch, mobile and soon Xbox and PlayStation, but we also have this GIANT community of Crewmates and Impostors all over the world???

You really showed up!!

To celebrate, 15 player lobbies are OUT NOW, which includes things like:
And various bug fixes:

Whew! Wondering what's next? Make sure you check out the Among Us Roadmap to see what our plans are.

Among Us
5,553
475
This game is finally dead.
Haven't touched this game again since march after it became so mainstream developers couldn't bother to care about the hackers and trolls and now i just recently checked its steam charts 14k players in a 24 hour peak. I'm glad this is what happens when you do ♥♥♥♥ all to keep your game up to date with its popularity instead they went for the quick cash grab route and added more ways to spend money on the game.

Sunny50D
16 hours ago
General Discussions
The Among Us Roadmap
Jun 10
Hey Crewmates!

Just a quick update, but as part of the Summer Games Fest, we revealed a roadmap for Among Us' future. 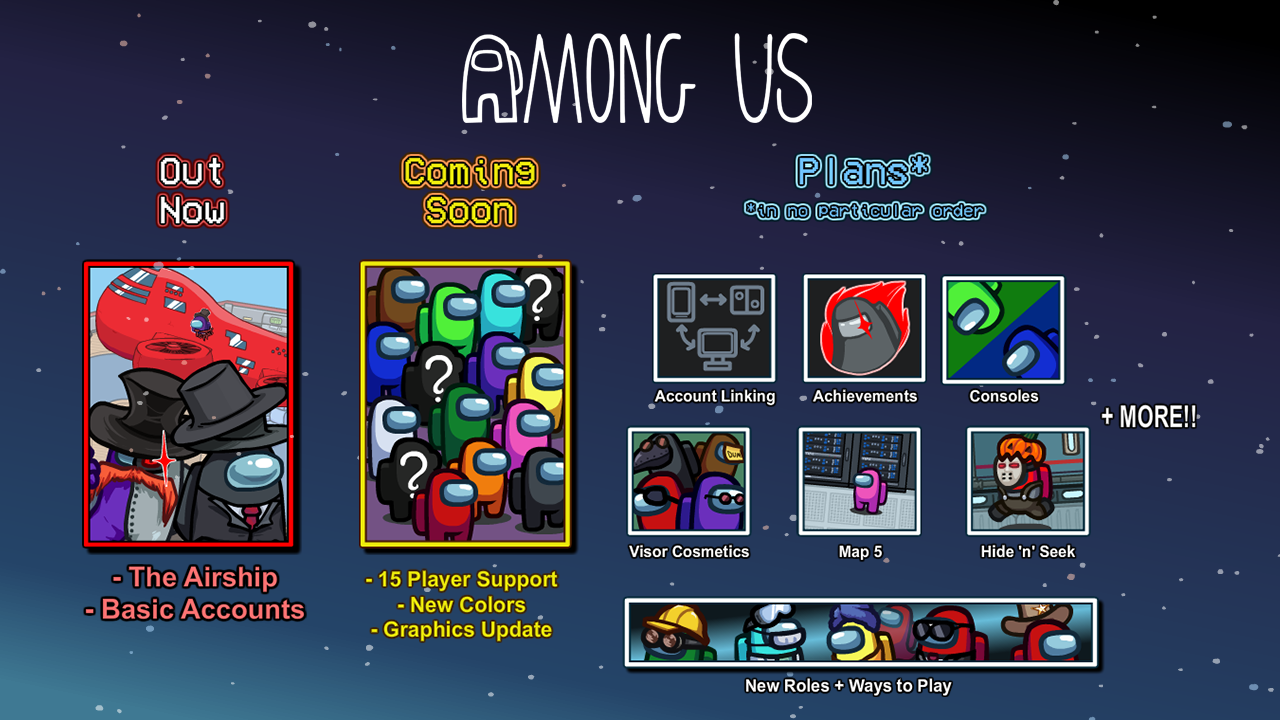 Once we can give you more concrete dates we will, but there’s A LOT to be excited for in the coming months. Keep an eye out this weekend too on our Twitter or via the newsletter[eepurl.com]... there's more we have in store for you.