In a violent, medieval world, outplay rival gangs in intense PvPvE multiplayer heists. Moving in stealth to steal treasures unseen or dominating through loud and brutal combat, only the best will escape with hard-earned riches.
-80%
$19.99
$3.99
Visit the Store Page
Most popular community and official content for the past week.  (?)
PVE and COOP
I'm thinking about picking this up for a few bucks but want to find out if there is a dedicated coop or PVE setting or if the game forces you into a PVP match? I want to play together with friends but not have to deal with PVP or matchmaking.
2

Dr John Galt
Nov 26 @ 10:55am
General Discussions
Official FAQ
Hello Outlaws! We've put together this FAQ to answer the most burning questions we've seen from all of you. If we missed anything, don't hesitate to ask, we'll do our best to answer. Q: How much will Hood: Outlaws & Legends cost? The base game costs €29.99/$29.99 and the Year 1 Edition (which includes the base game, and year 1 Battle Pass Pack) costs €49.99/$49.99. Q: Will there be Crossplay? Hood: Outlaws & Legends will feature matchmaking crossplay, meaning a shared...
108 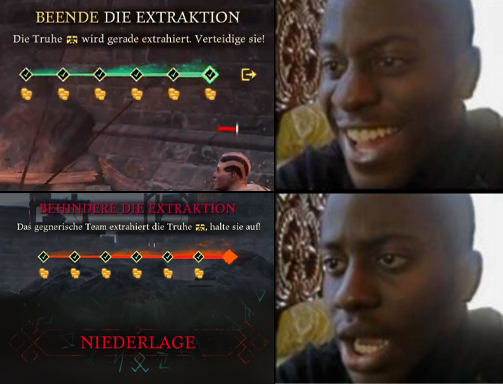 Lyeaux
View artwork
So you released the game free asswipes
Well done, now maybe you gonna break over 200 players simultaneously. I can only laugh of these devs and their prejudice against Australians and south americans.
24

Skl
Jul 14 @ 7:49pm
General Discussions
do people play?
ive seen some gameplay on it and would prob b willing to try it if i could find a lobby
12

unclediddle97
Nov 26 @ 12:15pm
General Discussions
What am I doing wrong?
I just got the game on epic, played 4 pve heists, won 0. First game, we didn't get spotted once, we killed the entire left side of the map, pulled the chest out, got to the end no alerts, and put the chest in the end, suddenly 10 guards show up, already alerted to our presence, and the 2 of us are just no match for them at all. Second game, I missed my parry and got one shot. Third game, same as the first, we got to the end, no alerts, suddenly the sheriff shows up and we're cornered on a bridge. The s...
21

8
6
How I found myself dealing with bows Lol 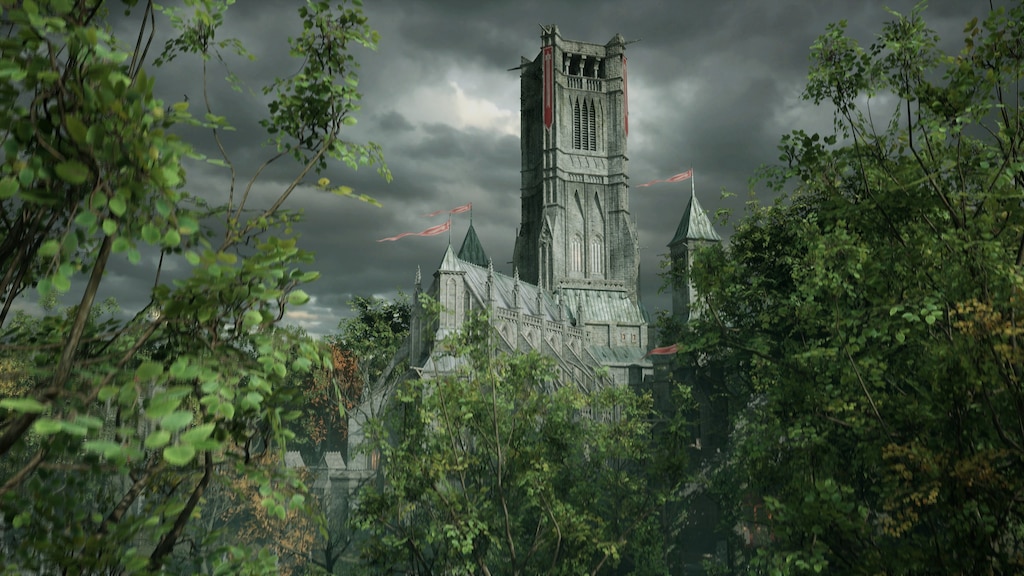 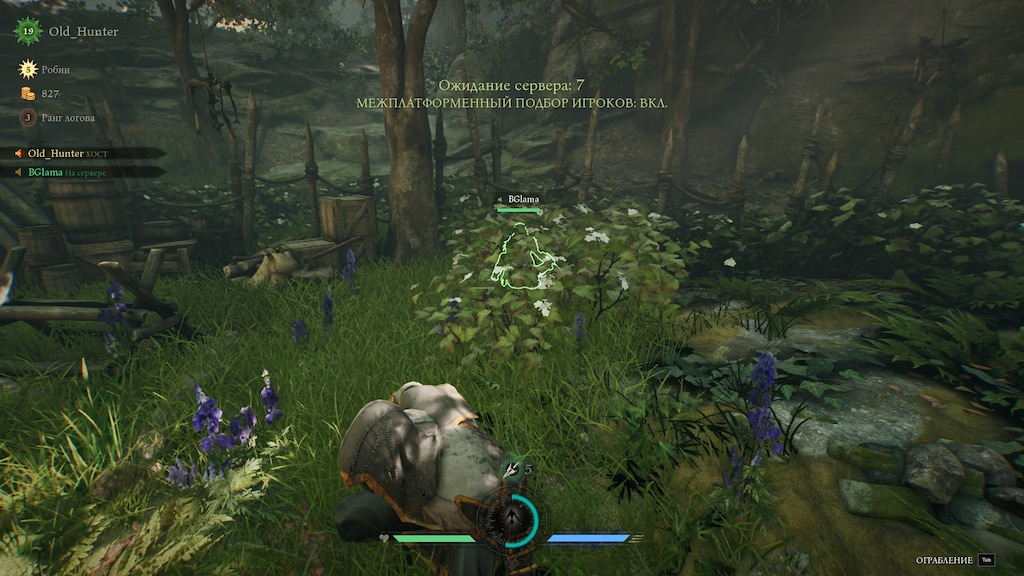 Maps reference & tips
A (somewhat) complete reference of the maps, along with some tips & strategies. 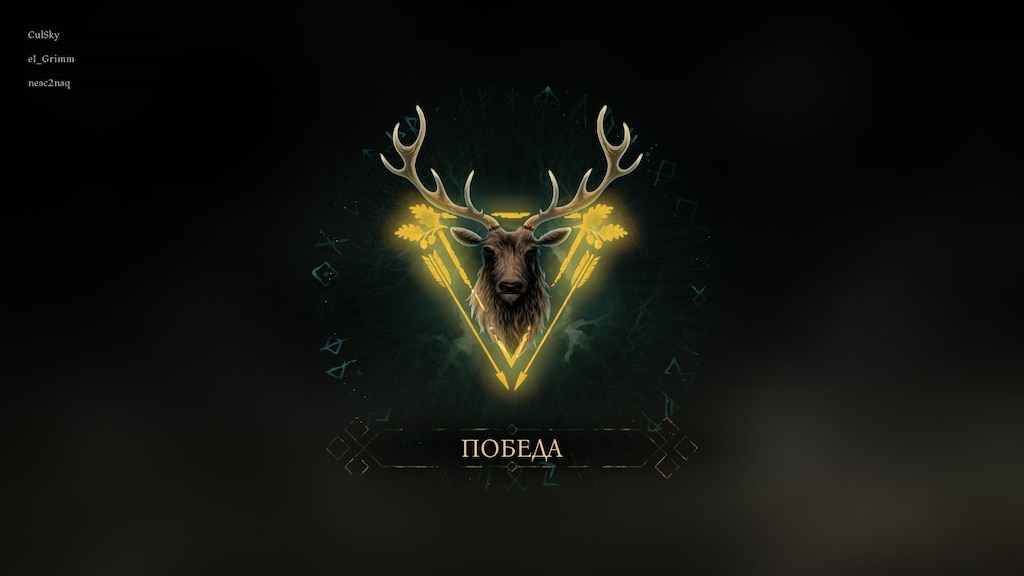 Not Recommended
75.2 hrs on record
“I've got it! I'm robbing the bank!”
~Jack Sparrow
So, here's a thing about me – I'm a huge Robin Hood fan. From early ballads to modern movies and everything else that is at least a little related? I'm all in. Naturally, there was no way for me to skip this one. Even though... Yeah, it was hard not to notice that this game got pretty poor response from both press and the actual audience. But still, a nice-looking game about Robin? Like I said, there was no way for me to ignore it. So, let's see what we've got here.

The first thing you should know about Hood: Outlaws & Legends (I won't like, even though the title is little bit cheesy, I kinda like it) is that it's an team-based PvPvE online game. Even though initially Sumo Digital planned to make a co-op oriented action game in a stylish and dark setting based on Robin Hood stories, they ended up making something drastically different. Heck, they didn't even make this game. Instead, they purchased CCP Newcastle (a part of the CCP Games, creators of EVE Online), renamed them to Sumo Newcastle and gave the project to them. While totally changing its nature.

Why? Well, CCP Newcastle had some experience with the online games (it was them who made EVE: Valkyrie), so... It was kinda... logical? Kinda? So, yeah. The first thing you should know about Hood is that it's an online-oriented game and if you're up for some single player stuff, there's nothing for you here. Literally. Nothing. Zero. Zilch. Nada. Technically you can play this game alone through “training” option, but... You've got the idea. Solo training just can't be considered as a real deal. There's no proper single player mode here, there's no story of any kind (even the characters aren't properly explained), etc. What we have here is an online game and that's it. You have been warned.

I'm not trying to say that it's a bad thing, of course. I do like it when online-oriented games come with a single player campaign, even if it's short and lacking, but still, there's absolutely nothing wrong with the online-only stuff per se. All I want is to make things absolutely clear. So... Yeah. Here we are. Getting ourselves another one of those PvPvE games. Akin to Hunt: Showdown. Which, again, doesn't sound that bad. I mean, we still have somewhat dark setting with some direct nods to Robin Hood, while all in all, there aren't that many of such games on market, so... Why not?

And you know what? This game actually does look good on paper. Like in PAYDAY games, we're supposed to rob the bank the vault. And we have four different characters (that act as classes) for that. Naturally, all of them are loosely based on Robin Hood stories, even though if, like yours truly, you're a fan, there won't be much for you here. The characters themselves are nothing like the originals and even their names were slightly altered. Robin himself acts as a long-ranged class, Maid Marian (called Marianne ) is all about stealth, Friar Tuck (called Tooke) is a support class that can heal the others, while Little John is a tank. Pretty weird stuff, but not really in a bad way. I actually kinda like the design. I mean, Tooke fighting the enemies with his censer? That's some serious American McGee sh*t right here.

The actual gameplay looks pretty promising too. I mean, we sure had some task-based online games before (Fatshark's Warhammer: Vermintide, for example, is still pretty popular among players), but Hood comes with a pretty interesting twist. See, all the other things aside, what we have here is... a stealth-oriented game. And it's a pretty daring thing to attempt. I mean, let's just admit it – stealth was always about single player. Just because of its nature. Being constantly afraid of being spotted, keeping your finger on a quicksave hotkey, listening to your enemies and watching their behavior, patiently waiting for the right time to strike... All that stuff is really hard to imagine in a team-based online format. Balancing stealth? It was an enormous task. Make it too punishing and the game will become annoying. Make it too casual and there will be no point in having it. Did Sumo Newcastle succeed? Well... Kinda?

I mean, stealth here is a thing, it plays an important role (triggering the alarm would mean reinforcements, locked doors and no way for you to use the abilities) and, well, it adds to the mood. The problem is – it feels dull and cheap. Due to lack of proper indicators, it's pretty hard to tell when and where enemies can detect you and it looks like developers were aware of that. But instead of adding some proper UI elements from games like Thief and Splinter Cell, they've just made enemies as dumb as possible. Seriously, those guys are so dumb that it's not even fun to deal with 'em. Both when it's about stealth and combat. But I'll return to combat a bit later.

For now, I want to focus on the most important thing. The fact that this game feels... lacking. And it's not only about the UI. It's like that with pretty much everything. The game begins with some basic tutorial and at the moment you'll finish it, you'll see the entire thing. Locate the Sheriff, steal the key from him, open the vault, use one of the melee classes to carry it to the exit and then protect it for some time from either AI or the other players (depending on which mode you're currently playing). That's it. That's the entire game. There's nothing else here. Like, at all. Naturally, it becomes old very fast. Personally, I felt bored even before I started playing with the others. I mean, seriously. This game becomes boring right after tutorial mission. Like, what the heck? There's literally no variety and / or motivation to keep playing. Which is, like, death sentence for an online game. Naturally, not so many people are playing. Cross-platform thingy helps a little (most of the people I played with came from PlayStation), which means that it's still possible to find people to play with, bu-u-ut you know how it is. Half-dead game is almost the same thing with the one that's dead completely.

Some smart-ass promotion would help, but aside from Focus Entertainment giving this game away for free at Epic Games Store for some time, there wasn't a single attempt for something like that. Exactly the opposite, they keep treating this game as a real deal. They're selling battle passes, they're selling time-saving stuff that lets you avoid leveling up and so on. All while all we have here is the same repetitive “steal the key, open the door” sh*t. Everything in this game screams “lacking”. There's not enough classes, there's not enough modes, there's not enough equipment (there's no even proper loot system here and you just grind for gold to unlock things for your guys), there's not enough, well, everything. And it's not like it's a well-made game either. It looks decent, but, like I already mentioned, it feels cheap. Even the battle mechanics feels like something from those cheap wannabe action games. Dull, unpolished (open battles feel shockingly random) and overall unsatisfying.

So... Yeah. Even though Hood: Outlaws & Legends is far from being the worst thing on paper, it's just can't provide you with enough content to be considered as a real deal. Despite all the genre differences, it reminds me of that canceled f2p game called Nosgoth (Legacy of Kain spin-off). The Hood does feel like one of those cheesy f2p titles and even in f2p format it still won't worth it. Just because it fails to give you a single reason to waste your time on it. In other words, there's a very good reason why Nosgoth got canceled. This one should have been too. Dixi.

How gold is calculated
OUTDATED This guide will explain how gold earnings in the ending screen were calculated before season 1, by explaining the value of the chest and the 7 notches on the wind. 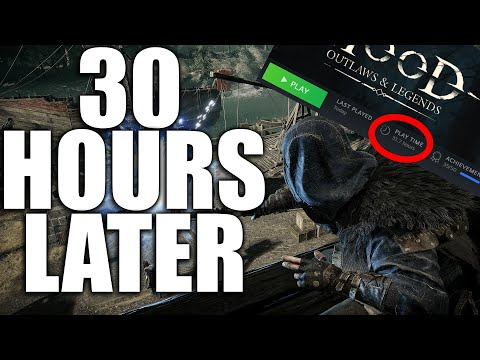 0
2
Is it Fun After 30 Hours? Hood Outlaws & Legends Honest Thoughts 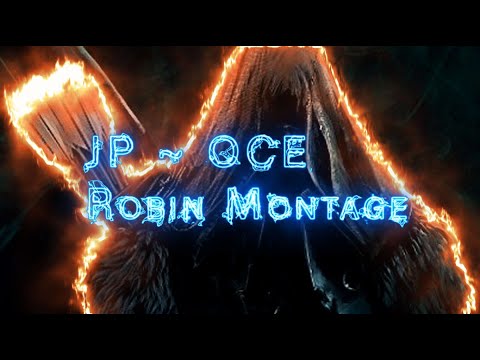 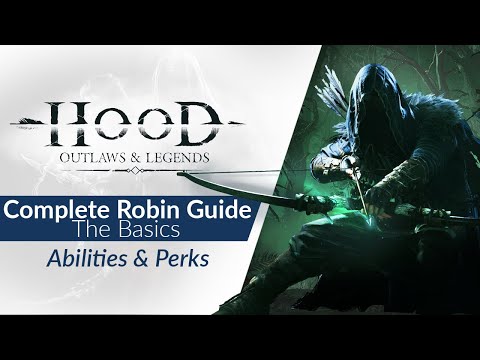 Get Rid Of Intro Credits
Simply go to D:\...\steamapps\common\Hood\Hood\Content\Movies and delete Hood_Loading_Movie Done.

The basics for stealing from the rich and giving to the poor (And yourself!)
Hello clicker and reader and welcome to (hopefully) a understanding basics guide to help you start racking in gold for your hideouts (Or self you greedy f**ks. In this guide we'll go over overall basics, how do the two types of playstyles work, In-depth de...
25 ratings 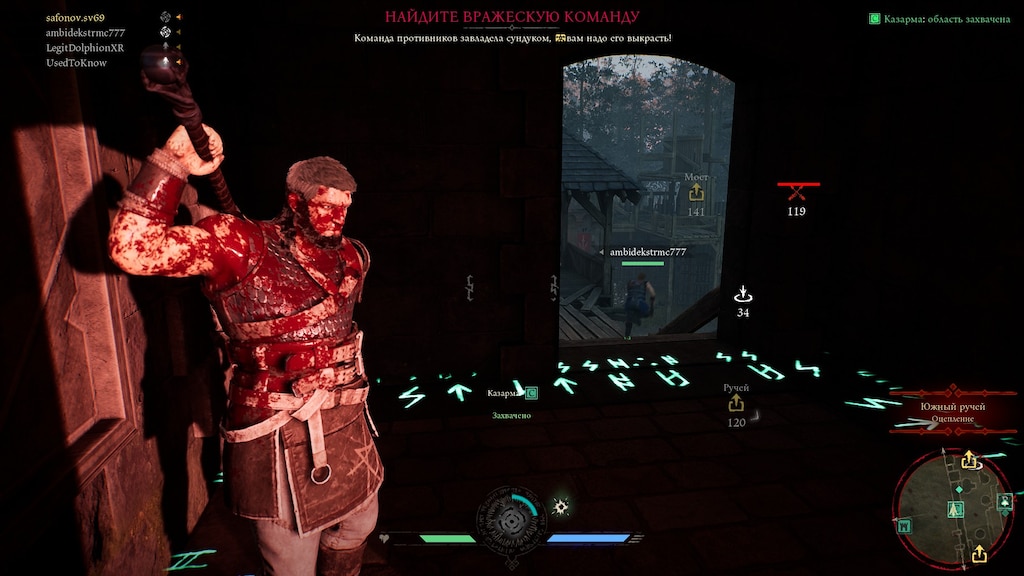 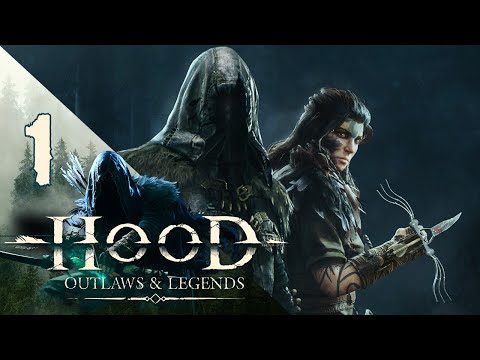 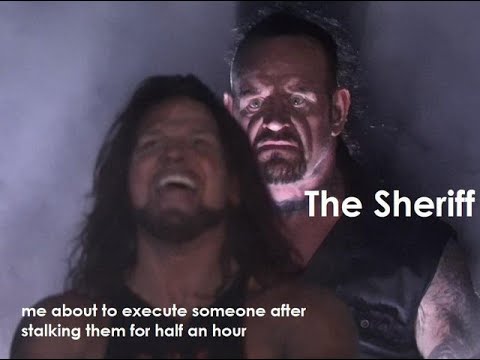 Recommended
6.5 hrs on record
High-Quality Game. Really Fun, especially with friends. The only thing I recommend is to allow cross-platform friends, and maybe some more content to spice things up a bit.

Not Recommended
3.8 hrs on record
traysh