Chef is a Restaurant Management game in which you create your own character, acquire supreme cooking skills, customize restaurants, design unique menus, and devise innovative recipes with a realistic editor.
$19.99
Visit the Store Page
Early Access Game
Get instant access and start playing; get involved with this game as it develops. Learn more.
Most popular community and official content for the past week.  (?)
Actual spending limits of customers
I can easily find how much money each customer's budget is based on the number of dollar signs. What isn't clear is if this is a strict monetary limit or a markup limit. If you have a lavish steak dish that costs $10 in materials and you're only charging $20 for it, would a cheapskate love it because it is far cheaper than the industry standard markup ($30) or would they complain because $20 is a lot of money for a cheapskate to spend on food compared to a $1-$2 dish....
3

4 Steps to Early Game Profits
Please make sure to complete the initial tutorial to help you get started with the restaurant. Since its covered by the game itself, I will be omitting that part. I have skipped some parts of the game mechanics, especially the recipe editor as it will r...
25 ratings

plotz' Cookbook: Recipes for aspiring starter cooks!
Hi everyone, this little guide aims at simplifying your start and your real world cooking alike. I will update and extend it with more recipes. For now, a little "starter recipes" section will be the talk of the day. For these recipes, you will require...

A Beginner Guide to Chef
This is a fairly comprehensive guide to the game Chef. I will be adding and changing sections with each patch until the game is released. Enjoy! **I will be writing the 5/18 patch section this week.** I'll do a recipe section after the recipe syste... 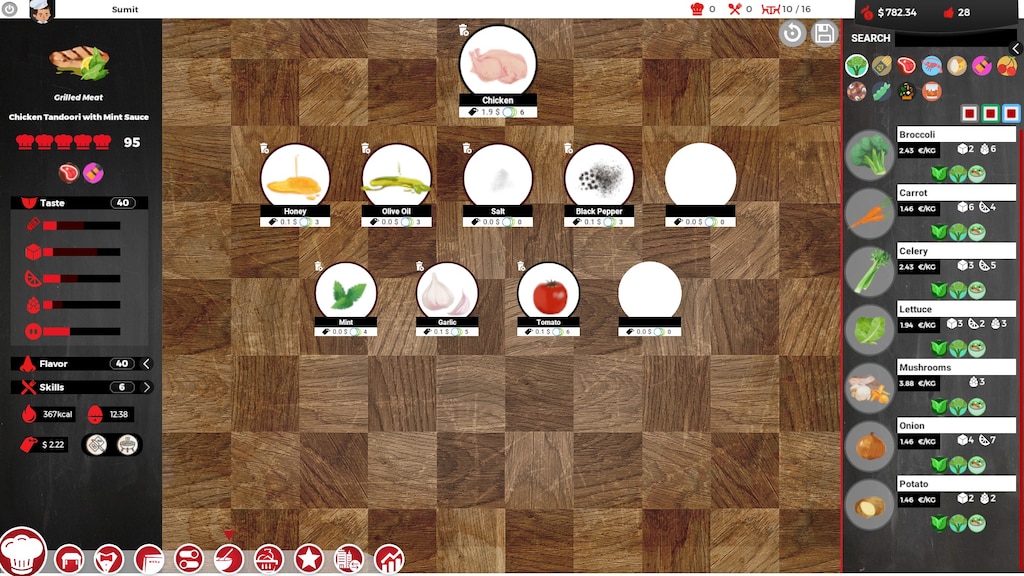 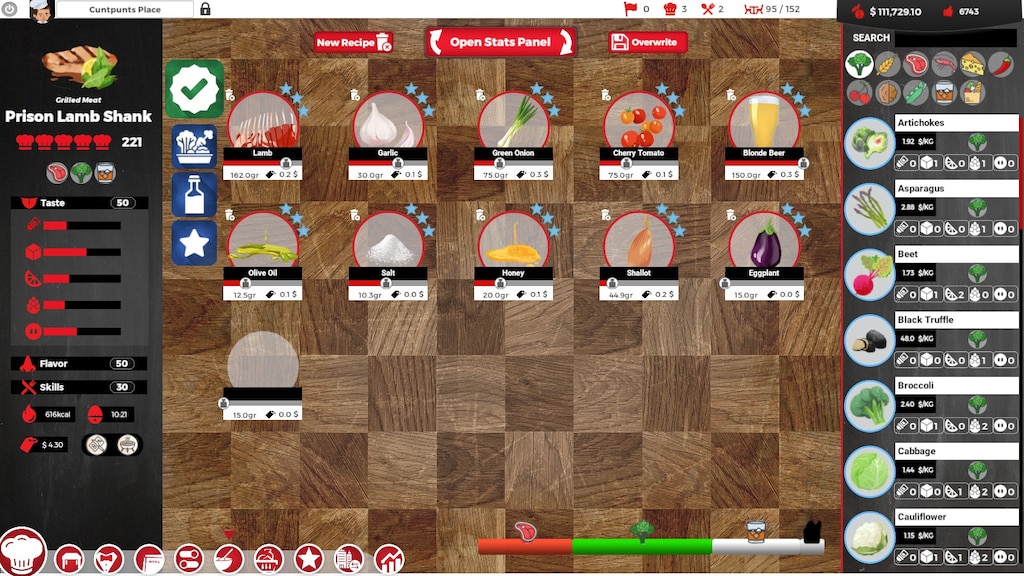 A Rodent's Guide to Starting Out in Chef
An introductory guide to navigating the interface and starting a successful restaurant. 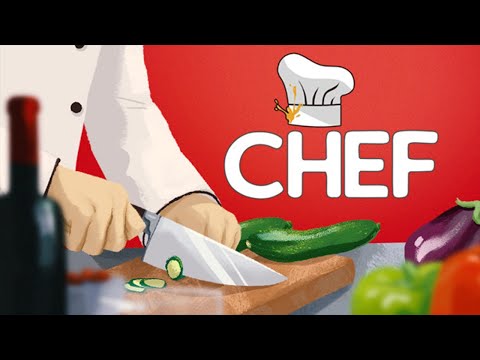 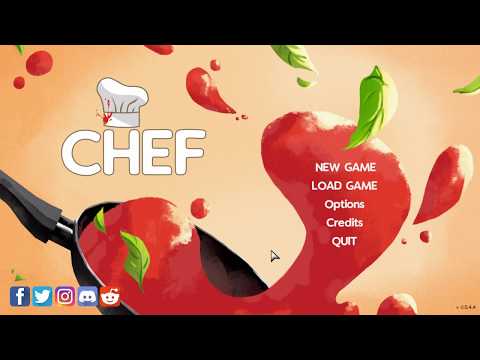 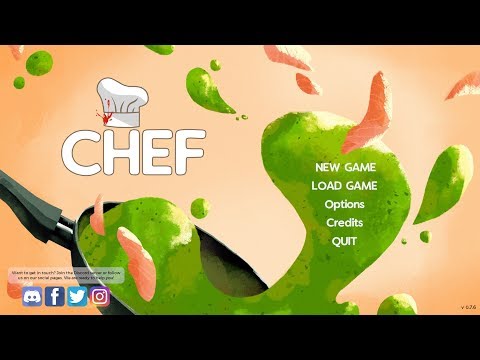 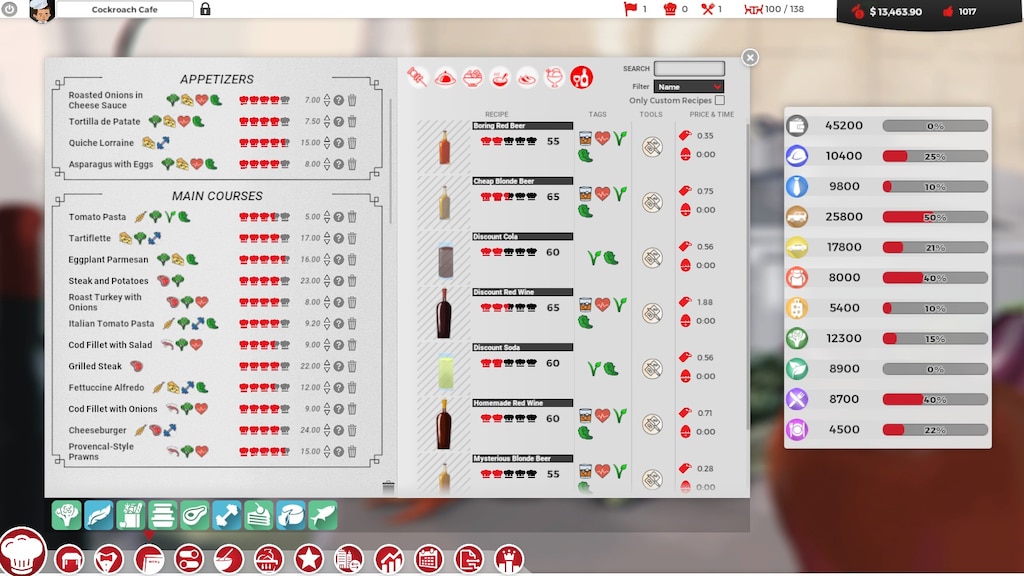 0
0
All menu items now have four to five stars.

Weresquirrel
View screenshots
Bug Reporting and Developers Insulting Thread
This is the official thread for all your bug reports, please try to only report bugs here to let us easily find them. How to properly report a bug Do not run other applications while running Chef. Also be sure the Antivirus is not me...
1,055

Not Recommended
5.3 hrs on record
Early Access Review
I may be critical about this game because I actually work at a restaurant, but this was disappointing. This game feels like someone went to restaurant and thought, "Hey, I think I know how a restaurant is run. I should make a game based on it." It seems impossible to make a profit when you're told to sell to cheapskates. To keep up with demand you need to hire staff. The cost to do anything far outweighs how much profit you get out of it.
The most interaction you get is developing recipes, but even then there are some unrealistic expectations and lack of creativity with the combination of flavors seemed "good". What the game seems as a dish worthy of selling would be unsellable in a real restaurant because things are either bland with lack of seasoning, or overly complicated with everything under the sun.
Calling this a "tycoon game" is generous". There's very little to the actual management aspect of the game. I understand that it's in early access, but it might as well be one of those idle games you play on your phone with the little actual interaction you have with the game during its work day. The logistics of your restaurant involve your staff just standing around for most of the work day. Also lunch and dinner rushes are around 1:00pm and 8:00pm respectively, when they're more likely to start at 11:00am and 6:00pm in a real restaurant. The restaurant doesn't even open until 12:00pm, with it taking about a half hour to get any traffic.
The logistics and economy are out of whack, and hopefully with time there will be a balance found. Unfortunately, this game is all over the place and unrealistic.
The aesthetic seems like a higher end game from the early 2000s.

kuyajeff
33 products in account
0
bankrupt within minutes
I had a resturant at the place with the lowest rent and i had a good amount of customers but i went bankrupt within just 10-15 mins. what am i doing wrong?
2

AaronTMG
Aug 3 @ 7:35am
General Discussions
I want to skip the tutorial, but I don't want to miss out on the free skill points
Can you make it so that skipping the tutorial instantly gives you all the skill/ food points you would normally get as freebies?
1

Pinstar
Aug 4 @ 1:45am
General Discussions
Suggestions Thread
Here's a thread for suggestions! Feel free to express your desires here, we will work to make them reality, if possible. Games like Chef can offer an enormous amount of customization, and we want everyone to enjoy the game as much as possible! Let us know what would you like to see in the future. After all, this is what Early Access is about!...
336

Not Recommended
8.1 hrs on record
Early Access Review
So there's a bug that makes you lose HOURS of work. Okay, yesterday I was having a hard time trying to save the game but when It finally said "Game saved." I quit the game. So at when I played it today, I couldn't find my saved game even though it was the ONLY one. The only thing that popped up was and auto save FROM THE START. I was already on my 3rd restaurant. So please fix this so I can change my review.
A developer has responded to this review