This bundle contains the base game Dinosaur Fossil Hunter and Designer DLC at a discount, but not just any discount! For the next few days, until November 29th, the following discounts will be applied:
= 37% total cumulative discount!

These discounts will be applied to Bundle purchases, meaning that you can grab all the currently available game content at a a really great price! Be quick!

https://store.steampowered.com/bundle/26974/
We will expand this bundle with Raptor DLC once it becomes available. 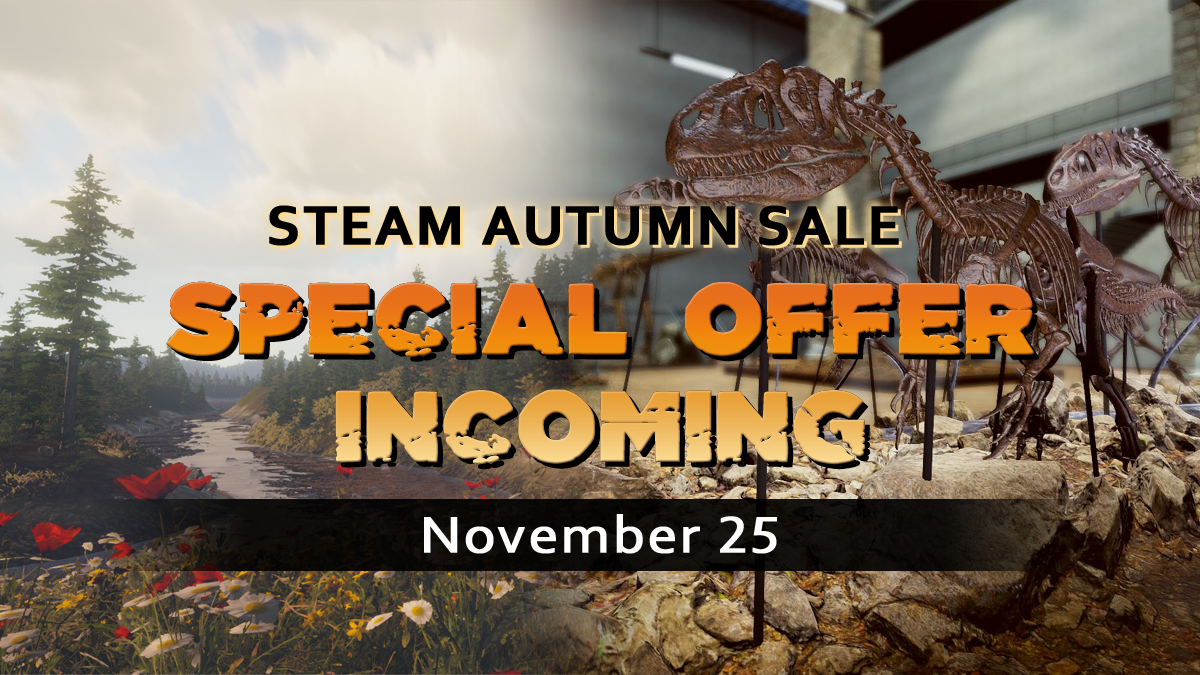 Steam Autumn Sale is here with -20% off and also we'll have something special for you on November 25th. Make sure to take a look at Announcements tab and the game's page on that day.

P.S. The Steam Awards 2022 have just started so remember that you can vote for our game in the Sit Back & Relax category - read more about it in previous post. 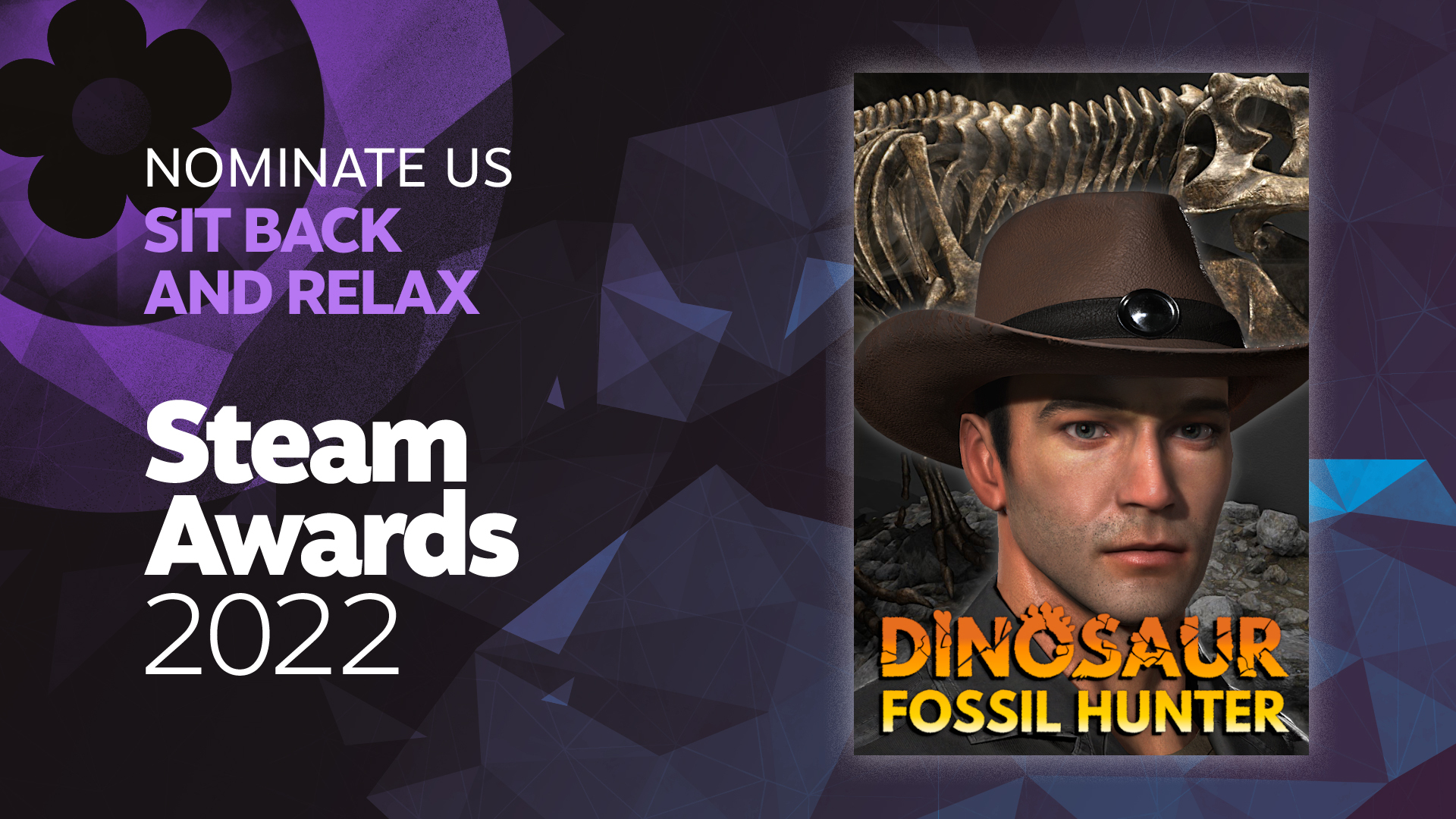 By creating this game we wanted to show the fascinating profession of a paleontologist, but also give you a break from the real world, full of problems. To create a simply Sit Back and Relax game.

If the hours spent searching, excavating and cleaning bones, topped by the wonderfully creative process of creating your own museum makes your heart warm - vote for us in the Sit Back and Relax category!

We will be very grateful for your vote!

P.S. Also today is the start of Steam Autumn Sale! Because of that both:
Dinosaur Fossil Hunter and Perseverance DLC are on a prolonged sale until November 29th!

trailer/grafika
Bring some life to your museum and show your creativity to the world!
This DLC comes with many tools to make this dream a reality!

With Designer DLC, you can paint life-sized dinosaur models of all species available in the game. Grim black T-Rex? Earthly brown triceratops? Or maybe you want go all out and create the most attention catching dinosaur possible? Nothing is impossible!

Designer DLC contains:
You can get Designer DLC here:
https://store.steampowered.com/app/2065550/Dinosaur_Fossil_Hunter__Designer_DLC/

Next DLC announced! The next DLC Raptor is coming soon! 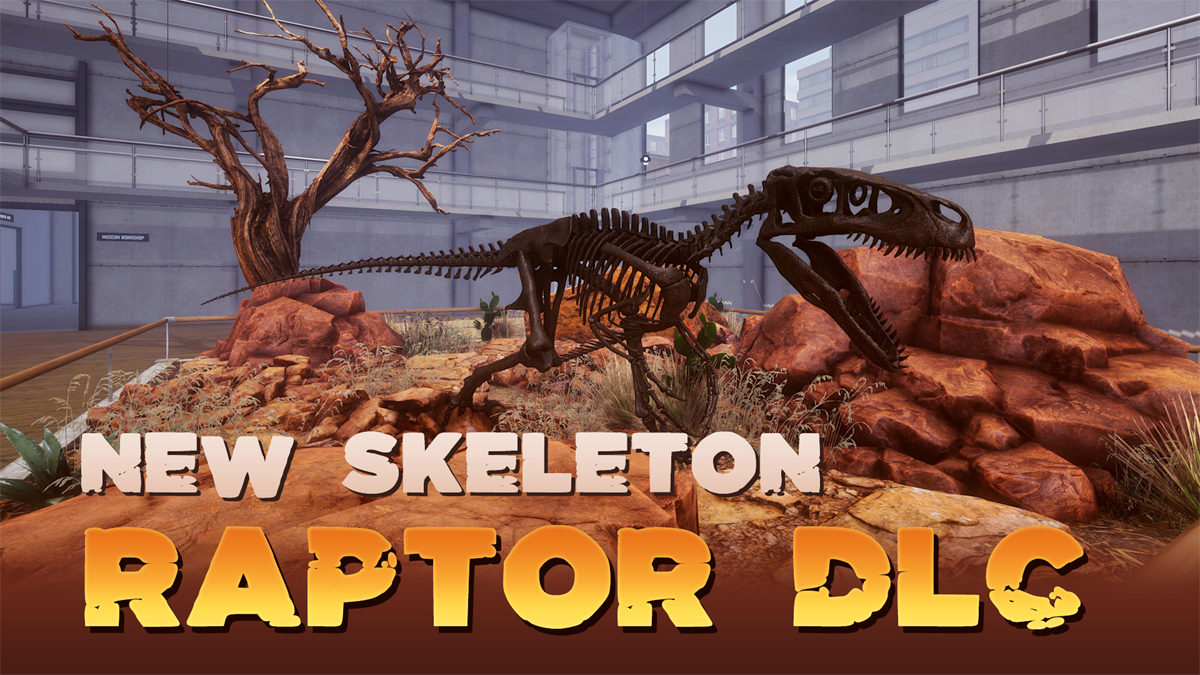 The Raptor DLC will include:
Did you know that the Velociraptors seen in the film Jurassic Park were actually the size of Utahraptor?! In reality Utahraptor, was quite a bit bigger than Velociraptor; adults were around 20 feet (6.1 meters) long and around 5 feet (1.5 meters) tall at the hip.

The Raptors shown in original Jurassic Park were enlarged Velociraptors (too big for current knowledge back then), but few days after the film was released Paleontologists discovered the Utahraptors which were actually the size shown in the Film!

Add Raptor DLC to your wishlist!

Remember that Designer DLC is coming to Steam later today and with it, dinosaur models will be waiting for you to paint them and give them some colors! Don't keep them waiting!

Take a look at the changelog below to see what's new:


We hope that with these changes, you'll have even more fun during your adventures! 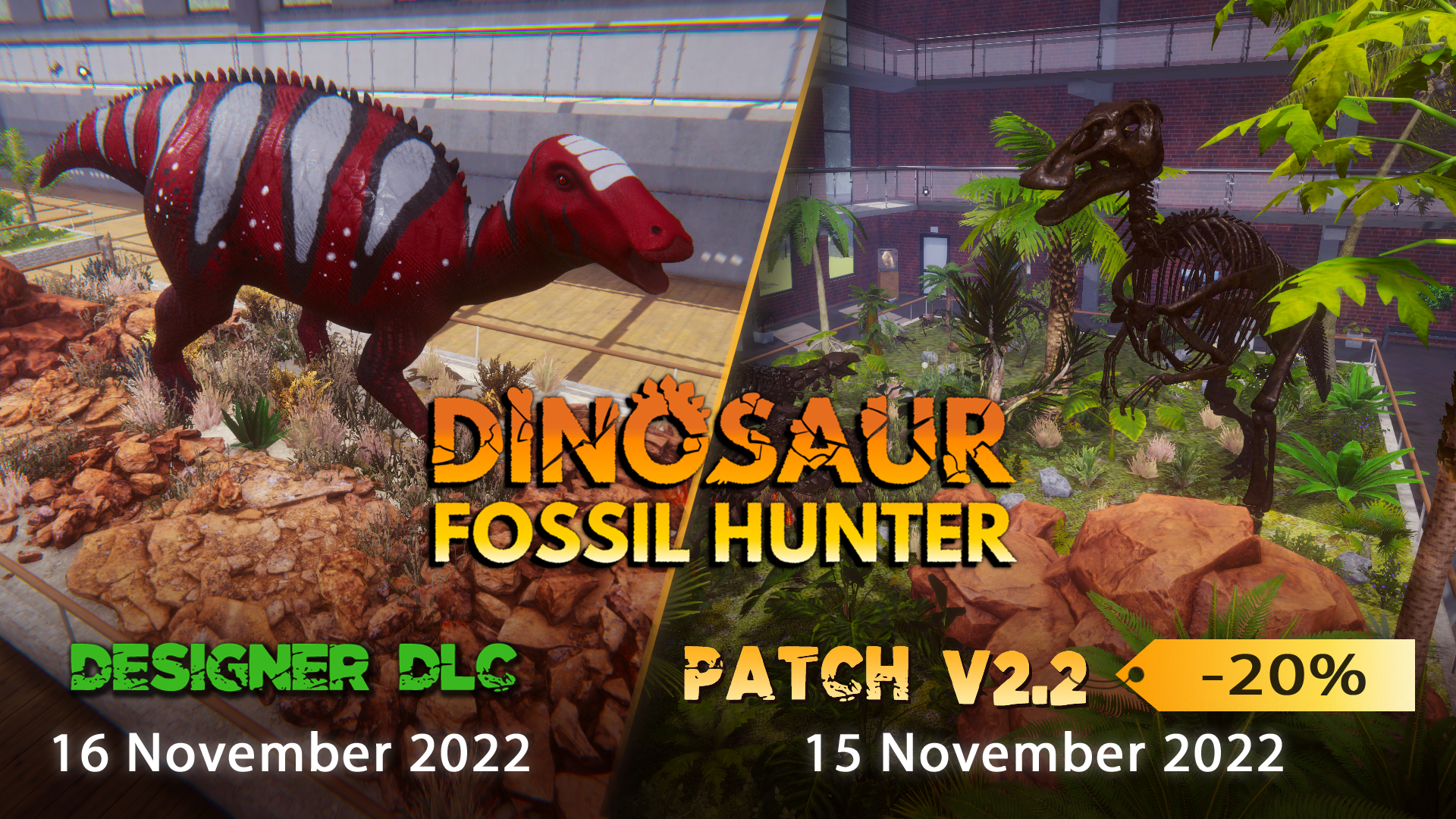 Designer DLC release is around the corner too – keep an eye out for it! You'll be able to bring your favourite dinosaurs to life with life-sized dinosaur models and a great variety of painting tools!

20% discount is starting today and it'll remain active until November 29, so if you haven't given the game a try yet, you'll have 2 weeks to get your inner paleontologist a treat! :)

Dinosaur Fossil Hunter
53
6
Patch v2.2 coming this week!
Nov 14
Fossil Hunters!
Designer DLC release day is slowly approaching but that’s not the only thing we’ll have for you in the coming days!

This week, you can expect a new Patch v2.2 for the base game Dinosaur Fossil Hunter! 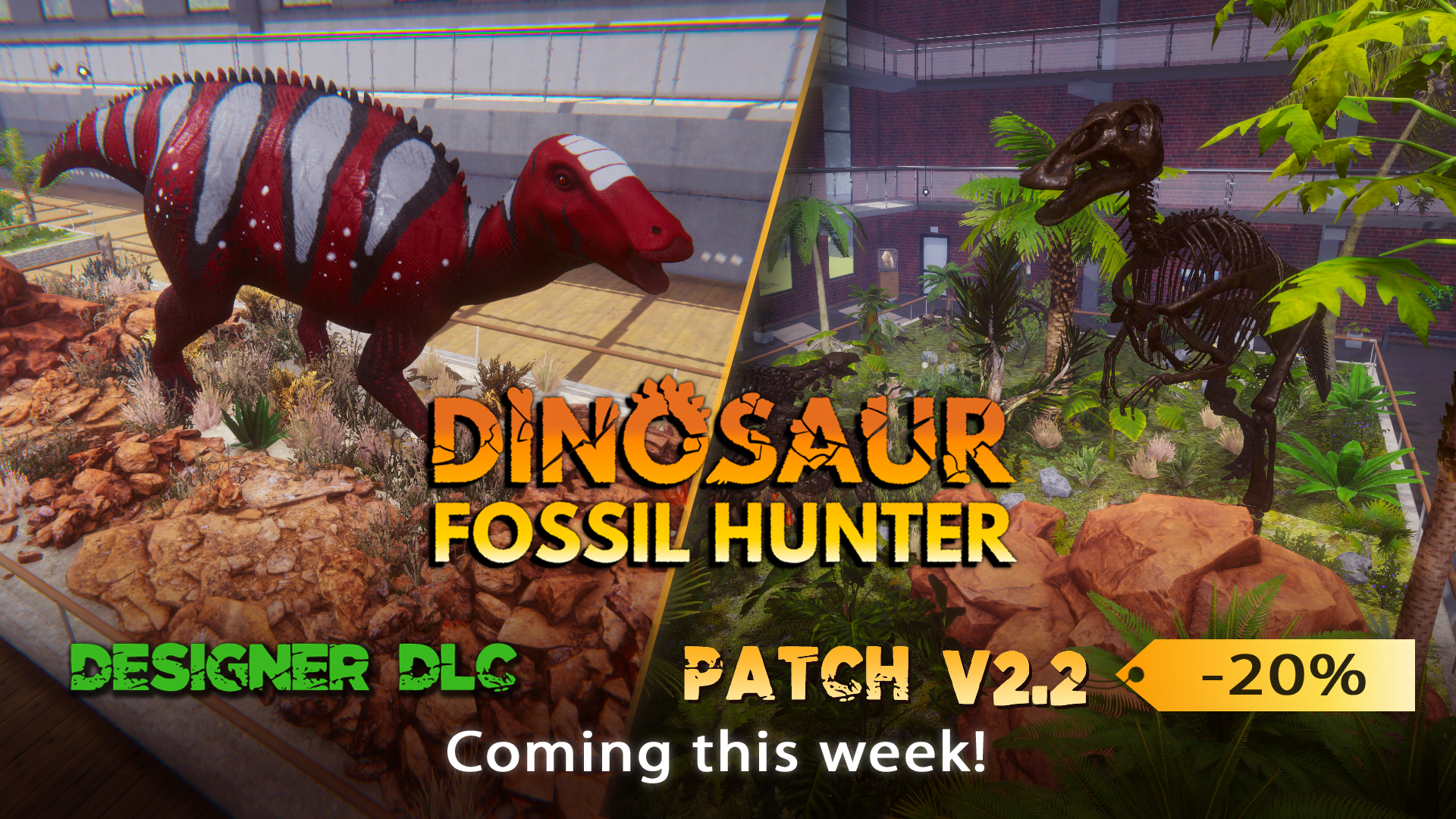 On the day of Patch 2.2 release, we will also be also applying 20% discount to the game!

Stay tuned as there are even more things coming your way in the next few days!

WePlay Expo Shanghai is the biggest indie game expo in China. Gathering around 300 games all over the world, WePlay is the perfect gaming event to connect Chinese players to our game!

We are very happy that our game will be featured there between 7-13 November 2022.

You can check other games taking part in the event here: https://store.steampowered.com/sale/weplay2022

TRAILER
This DLC introduces life-sized dinosaur models of every species currently present in the game, which you can paint any way you like! Dinosaur lovers fond of realistic portrayal can bring to life their favorite dinos and create amazing scenes with realistic colors and subtle details. On the other hand, those who are willing to let their imagination run wild can create unique designs for their dinos not seen anywhere else! Every approach is a good one. We only give you the tools to bring your ideas to life. ;) 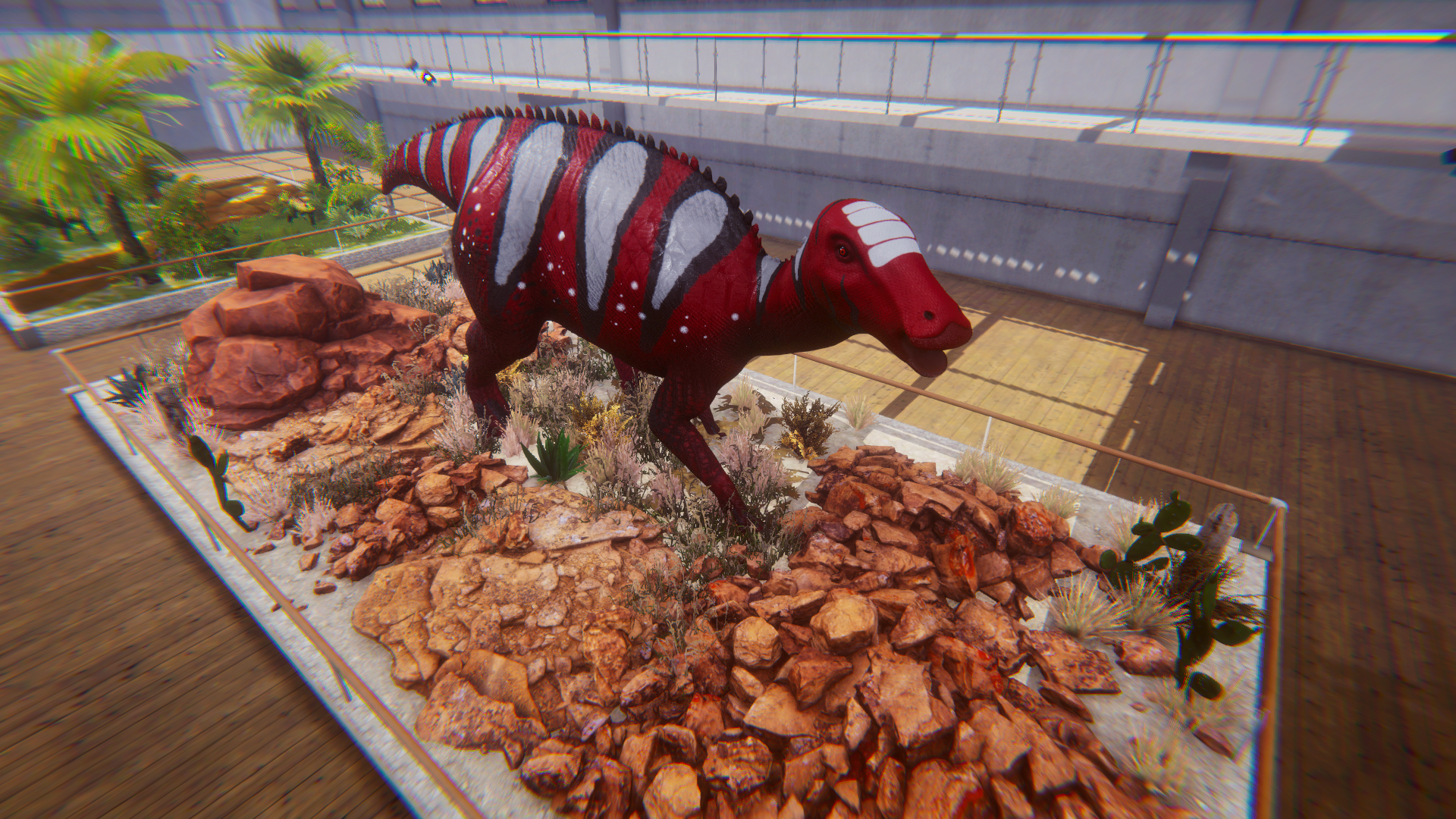 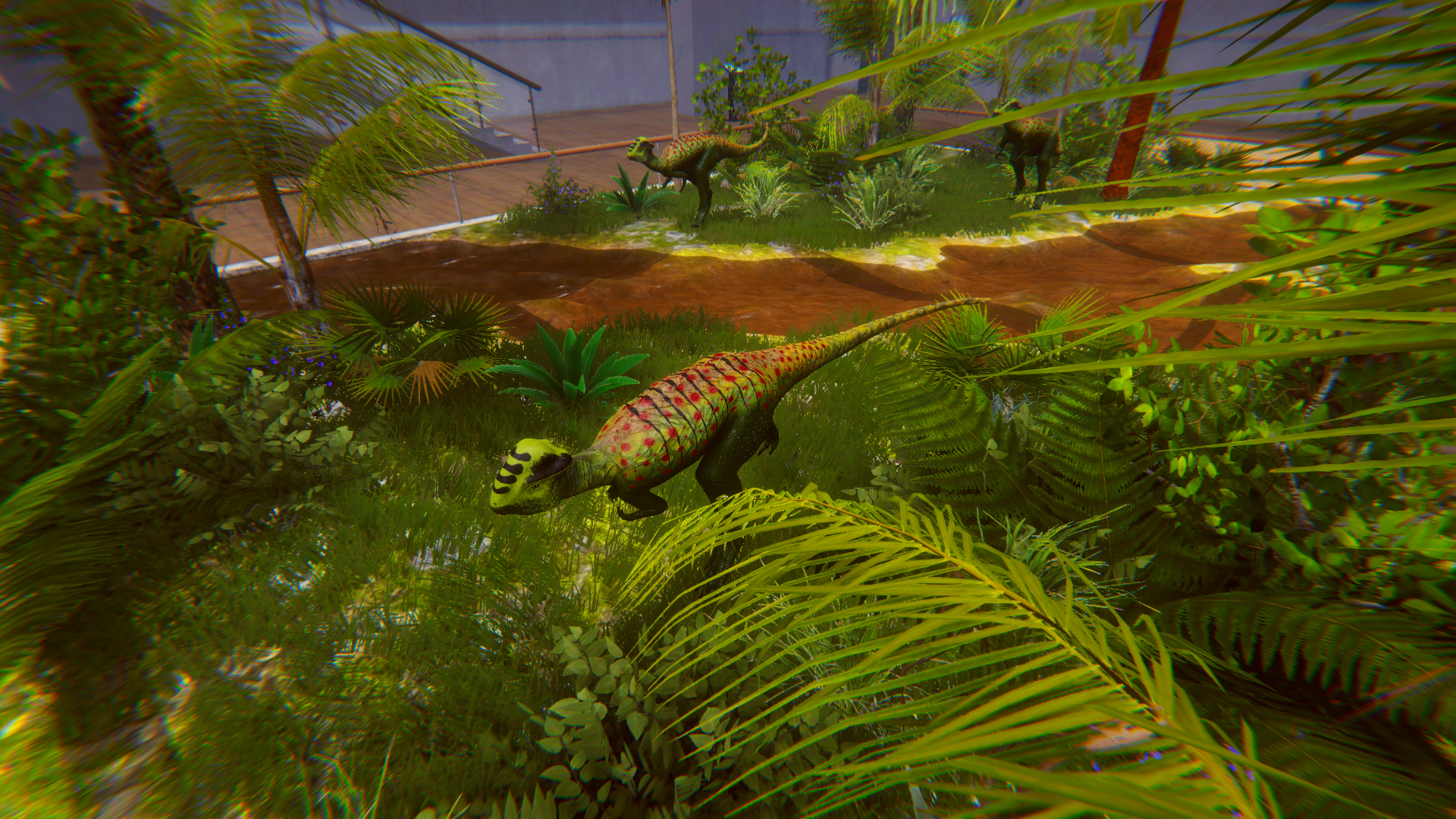 We’re sure they’ll bring a lot of variety to your museum and we hope that with this small personal touch, your museum will become truly yours.

Designer DLC will include:

Remember to add Designer DLC to your Wishlist to receive a notification right away when it becomes available! 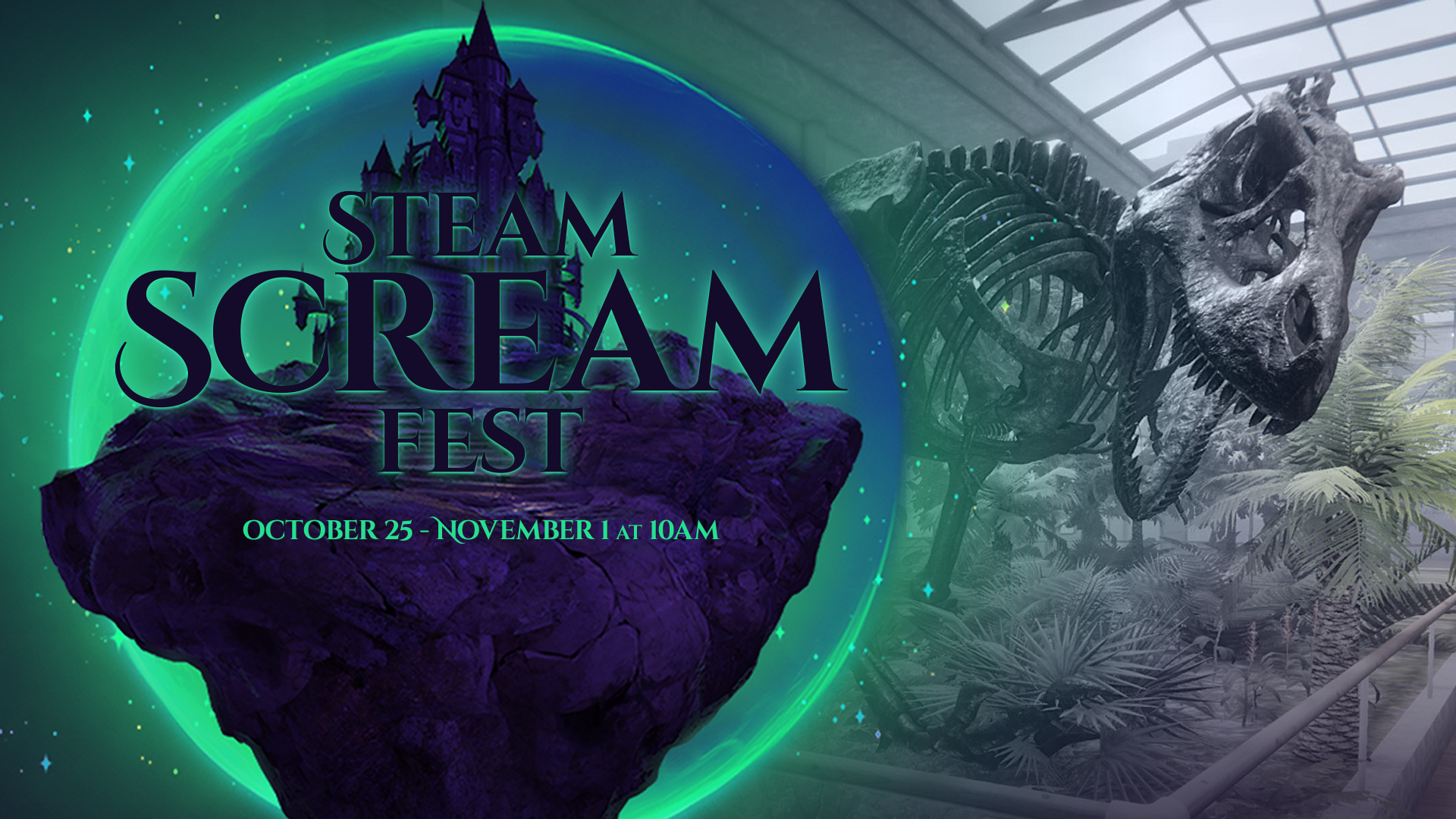 We are currently finishing work on the long awaited Designer DLC. We’d like to show you a small glimpse of all the possibilities you’ll have when painting your dino!

Some of them work really well with Halloween. 😉

🩸 Bloody scars – add an extra touch to your battle-themed expositions 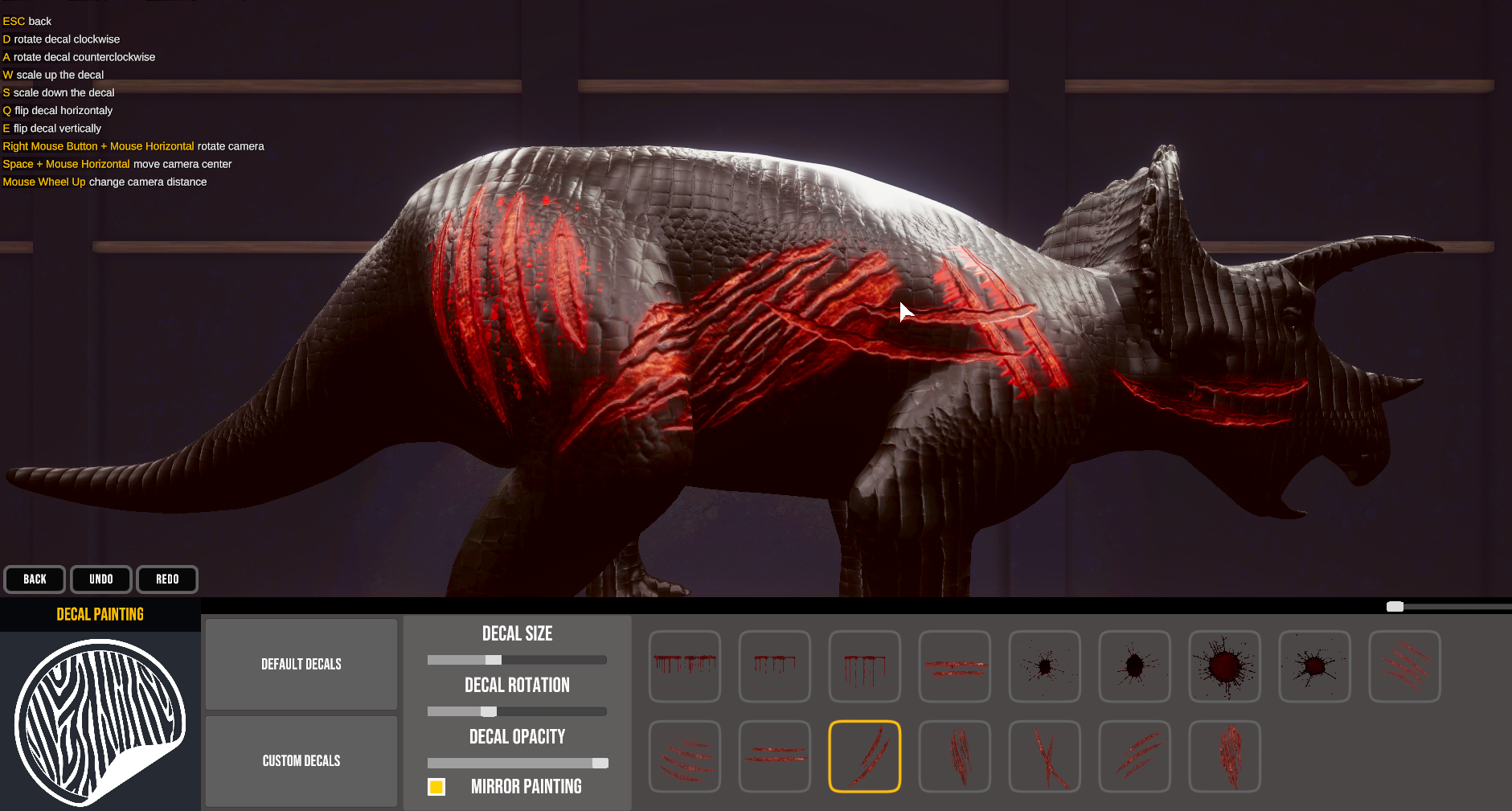 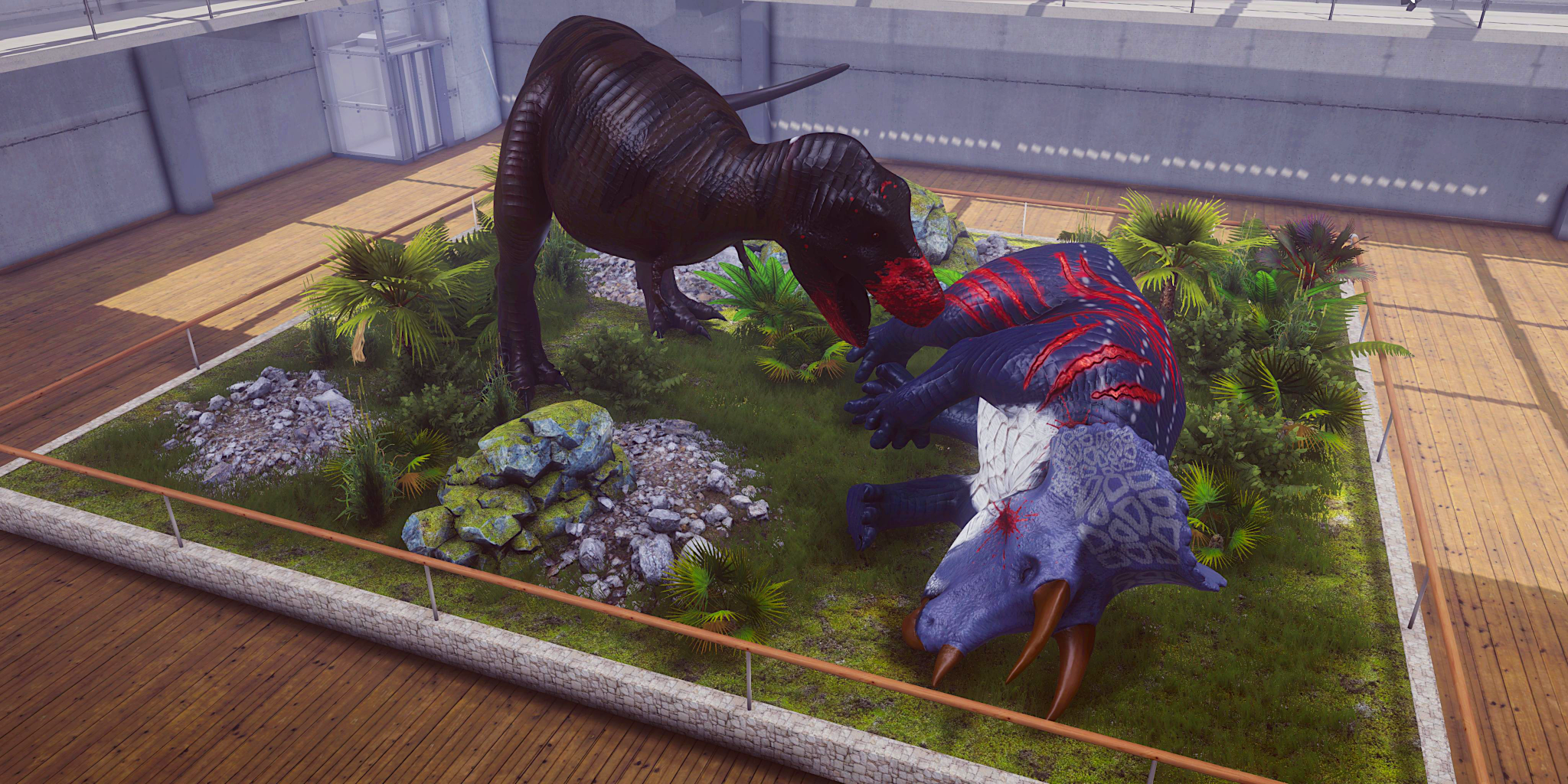 🎃 Pumpkins – bring Halloween atmosphere to your museum with new decorations 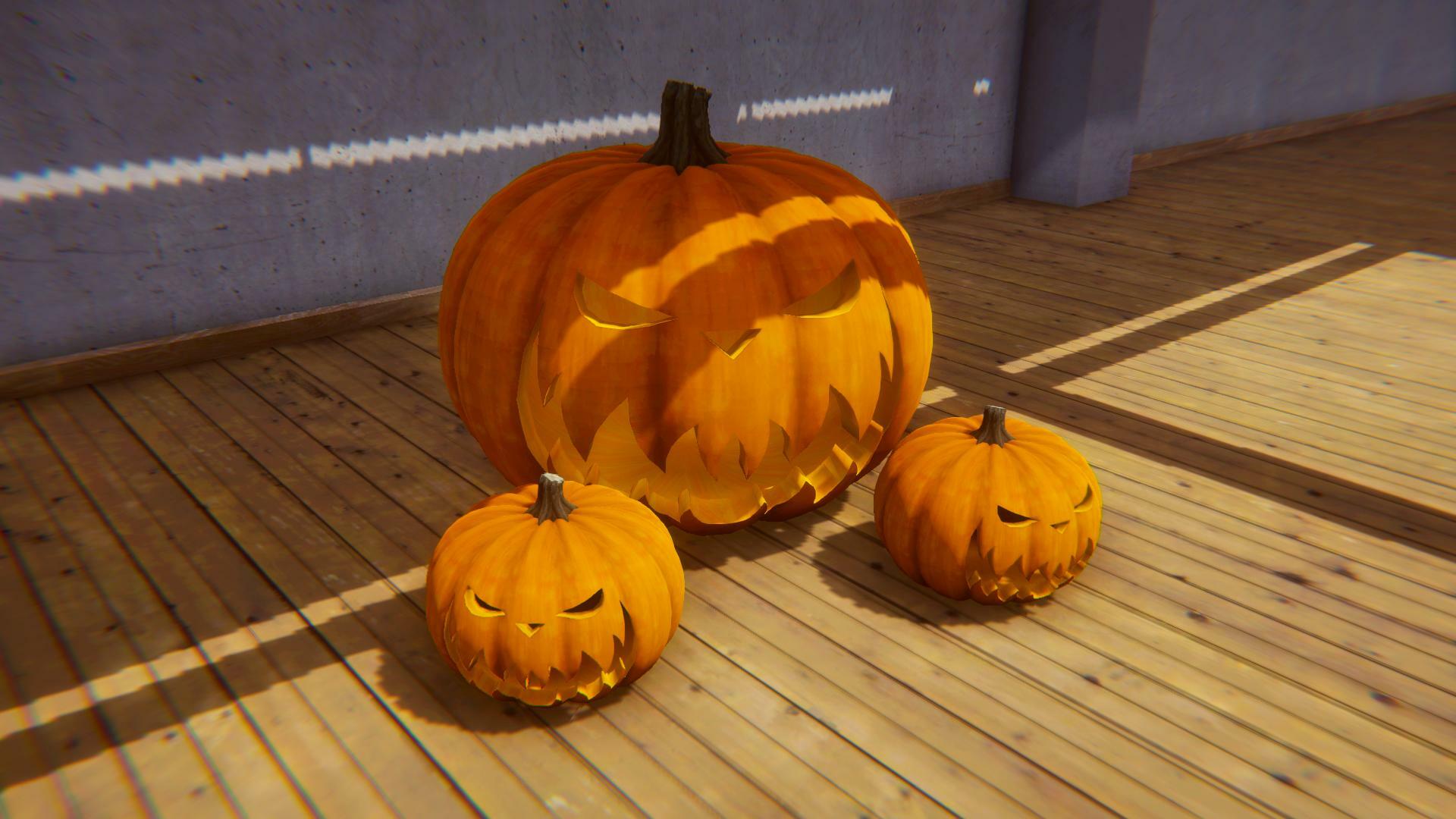 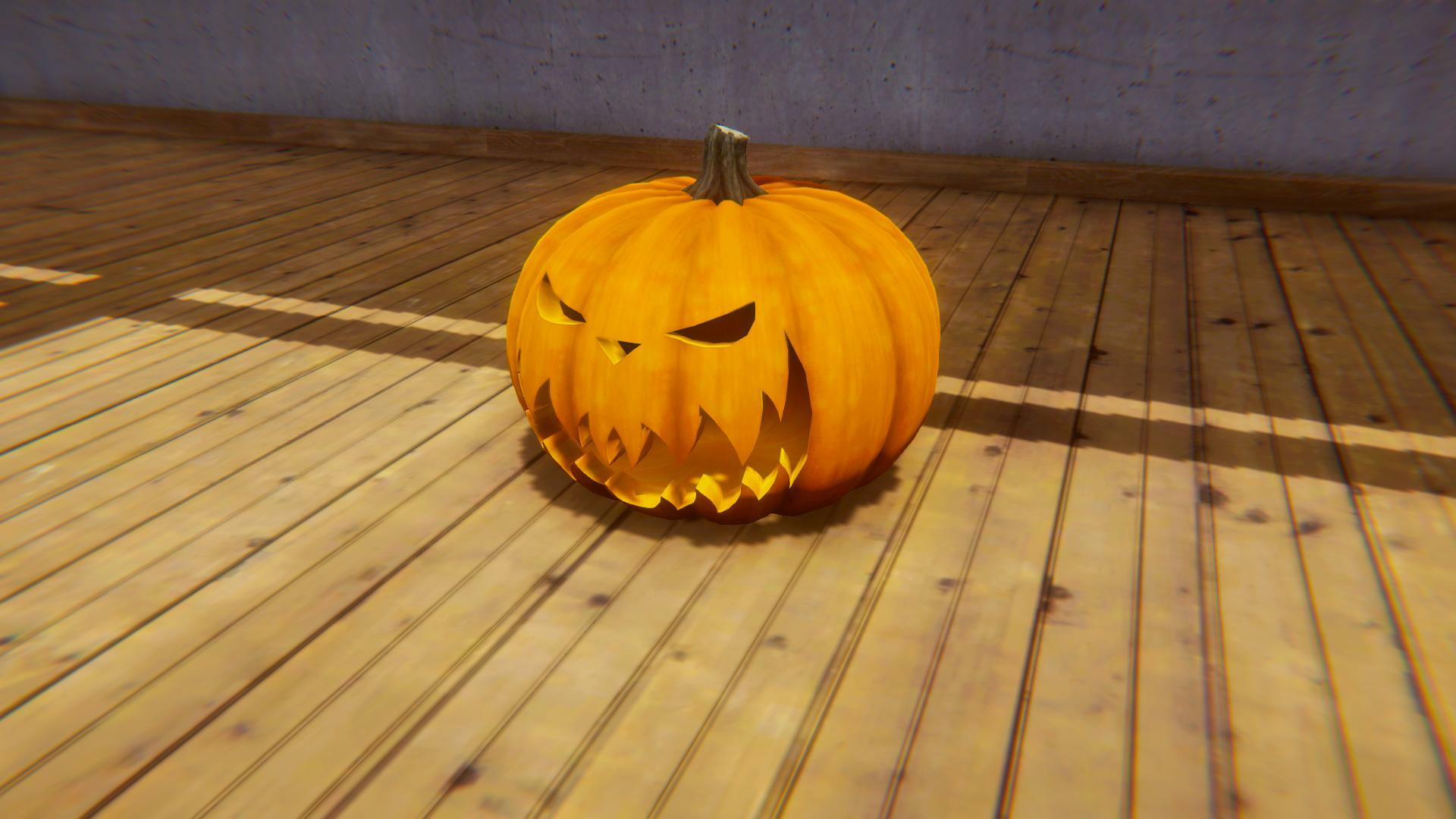 Add Designer DLC to your Wishlist and receive a notification as soon as dinosaur models are ready for painting! 🖌️