It’s a fight for furvival! Super Animal Royale is a 64-player, frenetic, top-down 2D battle royale where murderous animals fight tooth, claw, and machine gun across an abandoned safari park.
Visit the Store Page
Most popular community and official content for the past week.  (?)
v1.5: Season 4 is here with the Giant Star-nosed Mole & Super Lizards
Jun 28

Do you feel that rumbling beneath your paws, Super Animals? It’s a new season of Super Animal Royale, with the highly requested Super Lizards, Sense of Scale Animal Pass, and another big S.A.W. vs Rebellion game mode update including the addition of the Giant Star-nosed Mole. Choose your class and get ready for something truly beastly, because it’s time to dig into all version 1.5 of Super Animal Royale has to offer!

The animated series continues with more Superest Kills, more Blooper Scooper, and a whole lot of mole. Catch up on the adventures of Peep and Joe, and meet the first Giant Star-nosed Mole! 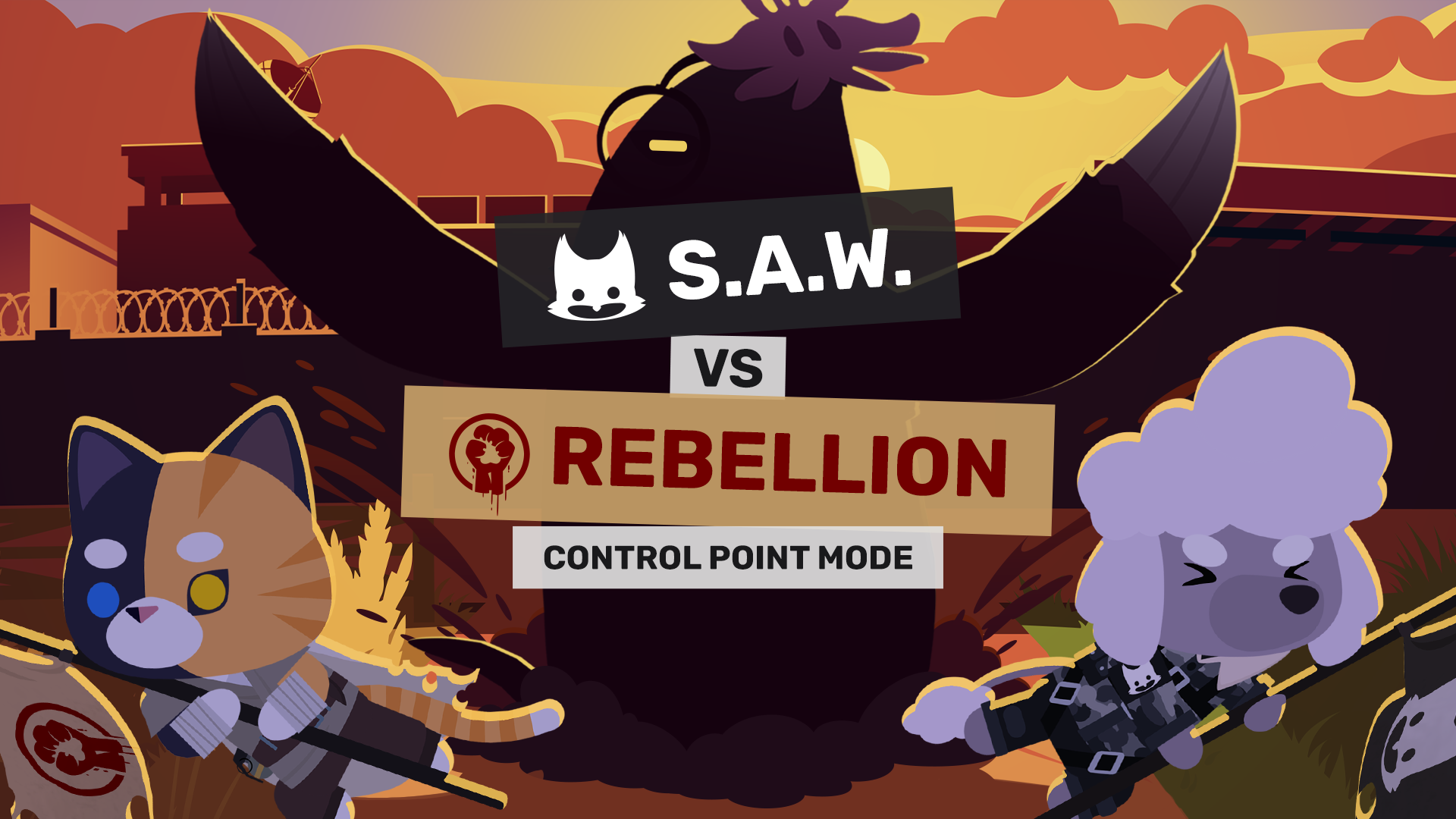 Once either team drops below 400 Reinforcement Points, a warning message will signal the Mole’s imminent approach, so you can use the time to converge on his location and join the fight, or hang back to defend or steal flags while others are distracted by the battle.

He’s got a bone to pick with both sides, and will make that fact known by throwing heavy crates at players within range and performing a devastating ground-slam attack if anyone gets too close. Plus, you’d be surprised how good of a shot the guy is with a wooden crate despite the near-blindness – it seems crate-chucking runs in the mole family. 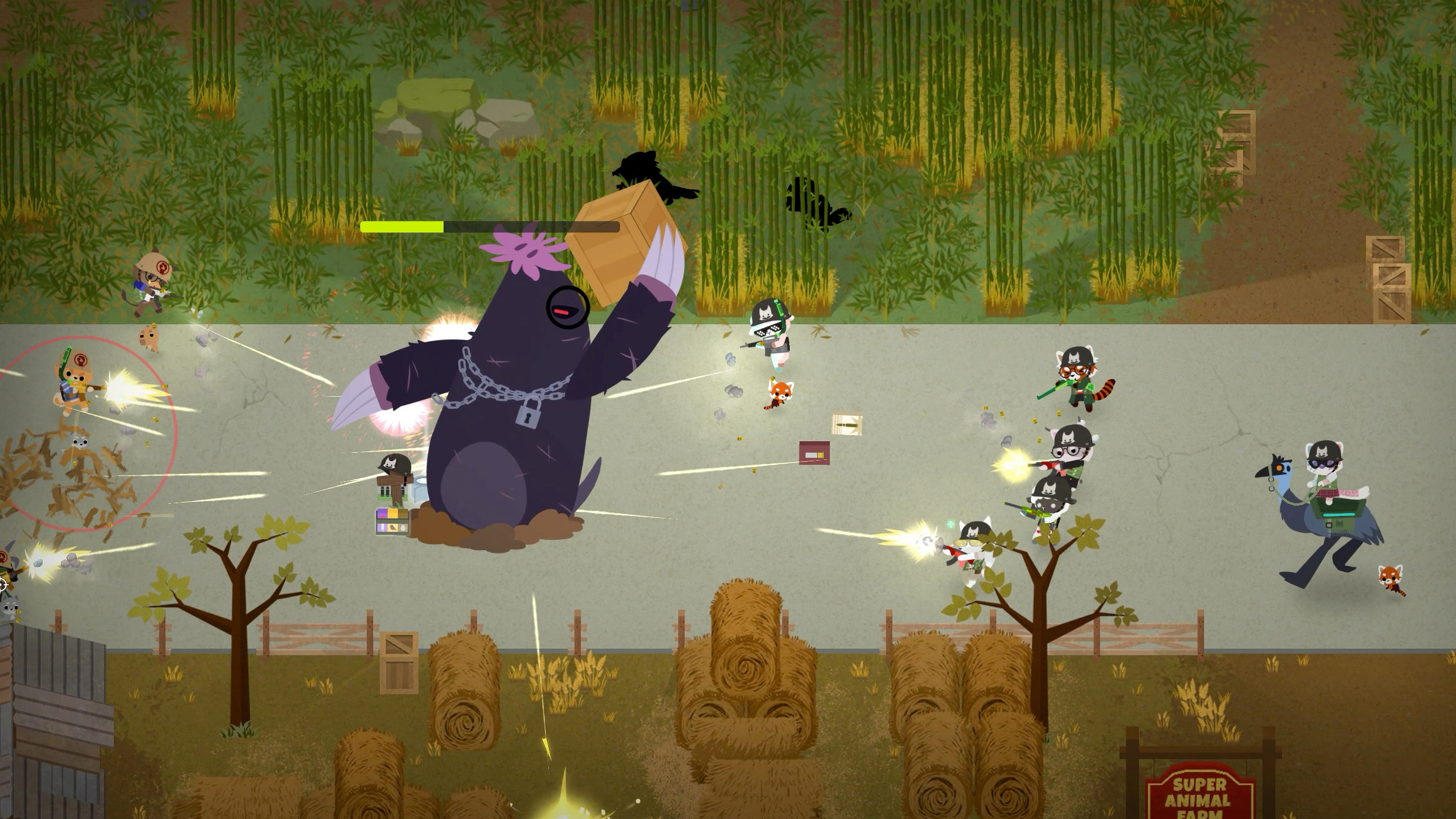 Our goal with the design of the mole was to create more opportunities for comebacks, but you’ll need to work hard to earn one. It can also function as an early mercy, for the winning team to secure a faster, decisive victory if they kill the mole first. Overall, we wanted to avoid matches feeling too predetermined and difficult to sway at mid-game, and the mole is one of multiple ways we’re aiming to address that in this update. Before we dig into the others, here’s a rundown of the key mechanics of the mole boss fight:
Beyond the mole, we’ve made further changes to the SvR mode that aim to make matches more dynamic:
Additional quality of life changes to the mode include:
Season 4 is Here: The Sense of Scale Pass 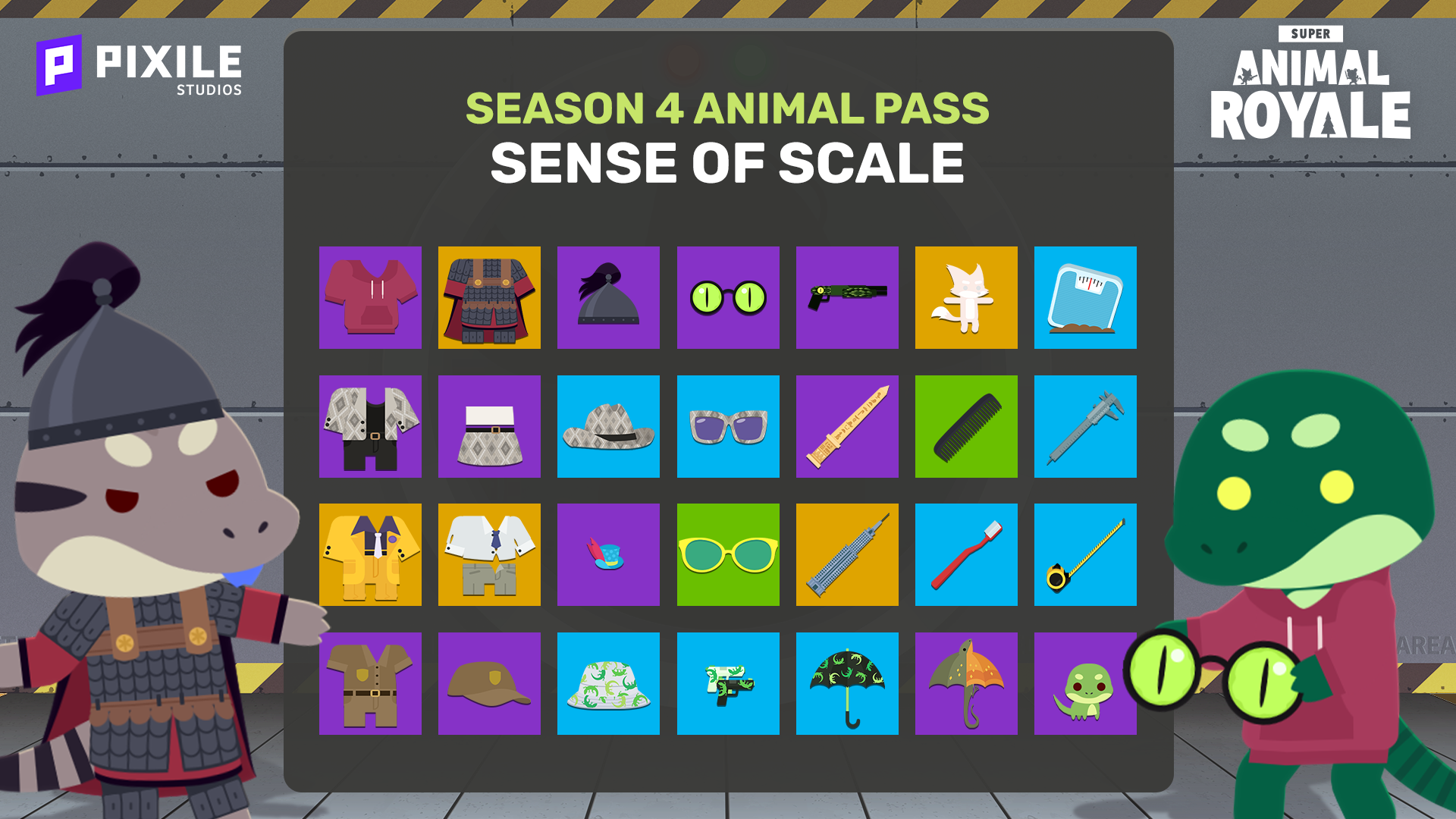 To celebrate the introduction of the Giant Star-nosed Mole and Super Lizards, Season 4 introduces the Sense of Scale Pass! This pass is packed full of cosmetic items, themed around all things big, small, or scaly, as well as a few surprises, like the highly requested T-pose emote. It also includes the Mini Lizard pet, which might just be one of the sweetest Mini Animals the Lab Labs have whipped up yet — so long as you have crickets to feed him. Lots and lots of crickets.
Season 4 Starter Pack DLC 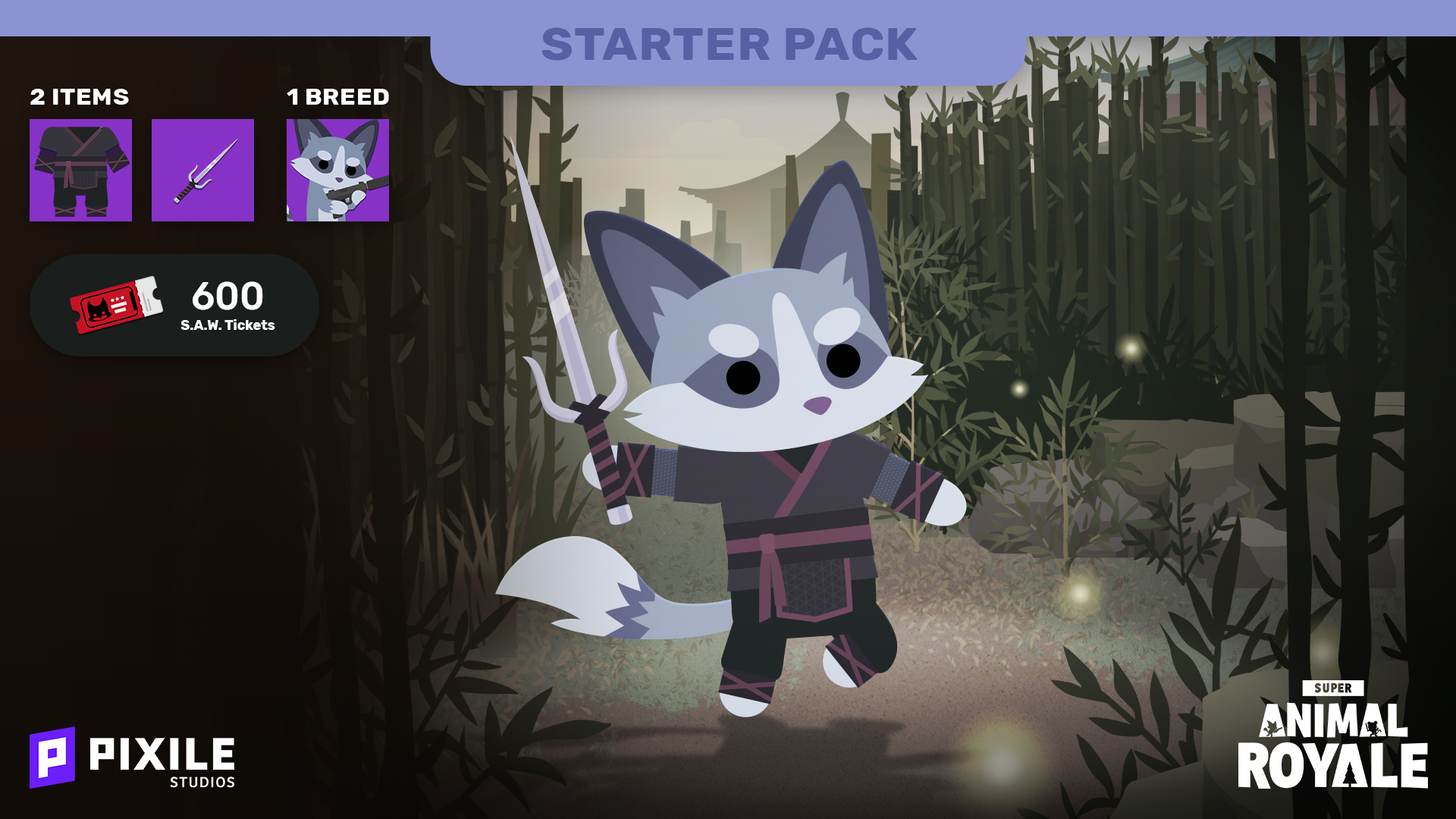 Along with the debut of Season 4 comes the Season 4 Starter Pack! You’ll receive the following items upon purchasing the pack:
Super Lizards Join the Cold-Blooded Rumble 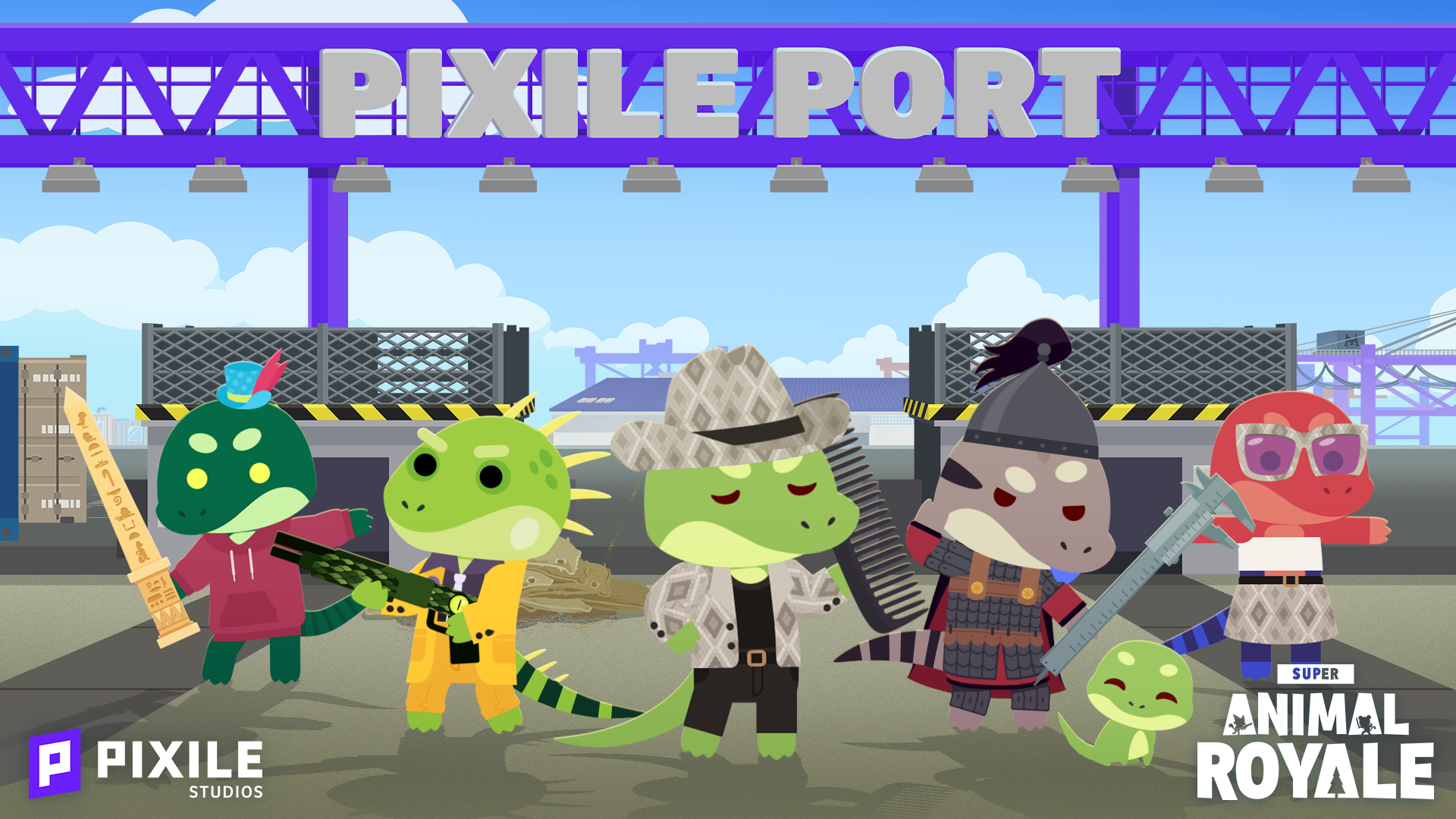 The Lab Labs have heard your rallies for reptiles, Super Animals! For too long, the Super Turtles have been alone in representing their scaly phylum of the Animal Kingdom. So, what better followup member of the reptile family to brew up in the Lab than Super Lizards?

Super Lizards have arrived in the Research Lab to create once you reach level 20. Play matches to earn their DNA, and use it with Super Serum to unlock all the breeds:
Updated Locales: S.A.W. Research Labs and Pixile Port
Two longstanding points of interest on the island are getting an update! 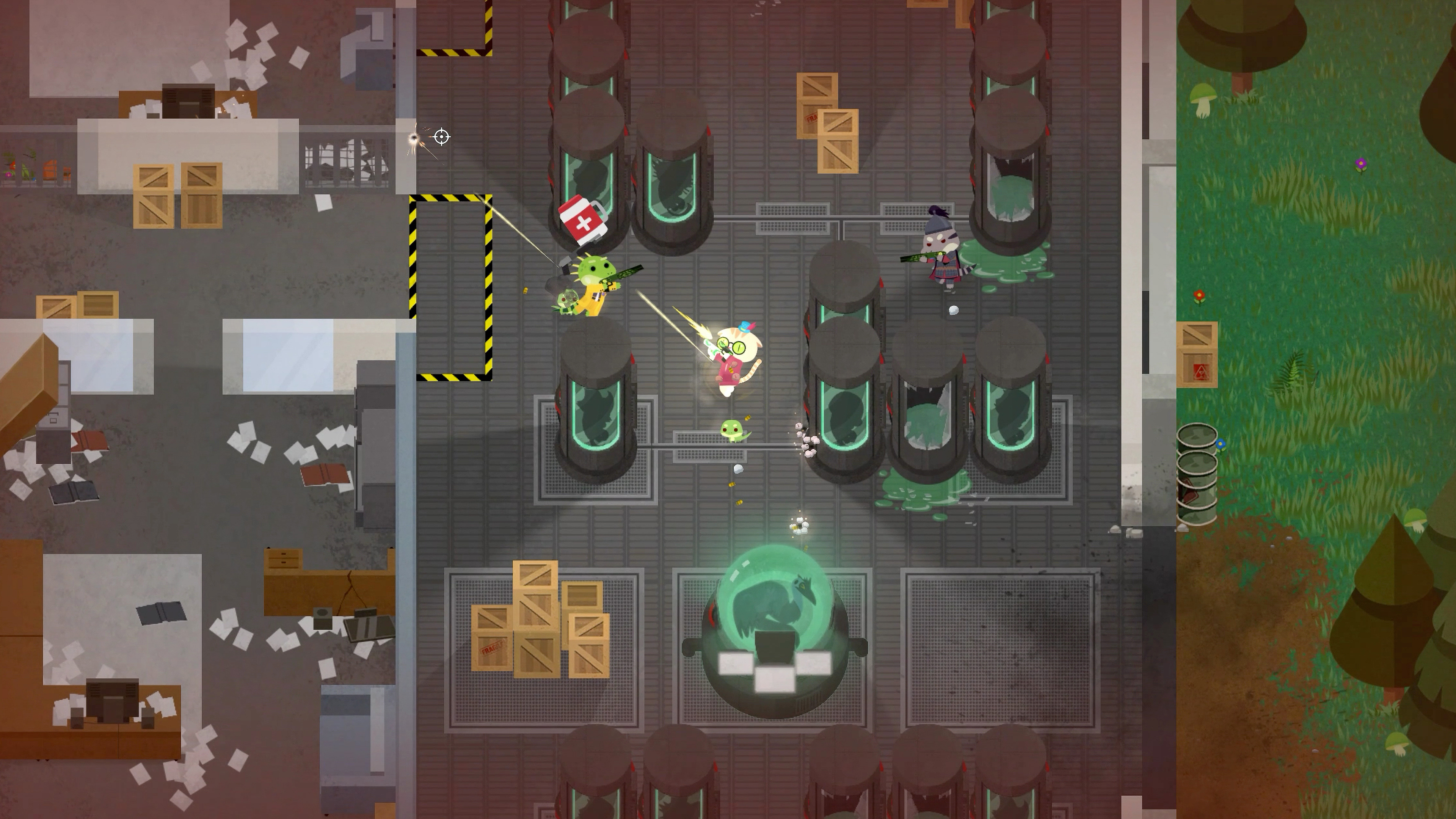 Firstly, the S.A.W. Research Lab’s tank room in Building #3 has been remodeled so that the gestation tanks better match the versions seen in the game’s menus and SAR Tonight. Giant Eagle-eyed players will also be able to spot different Super Animals floating in the tanks, including a Giant Emu in a specially designed pod for Giant Animals.

The room’s layout has also been improved for gameplay, so that the tanks provide more cover and corners, while also leaving some open space for fighting.

Rubble and a blast mark have also been added to the opening on the right of the building, to make the opening more visible and to make it a bit more clear what the historical reasoning behind the opening was (an explosion that breached the Lab in the past). 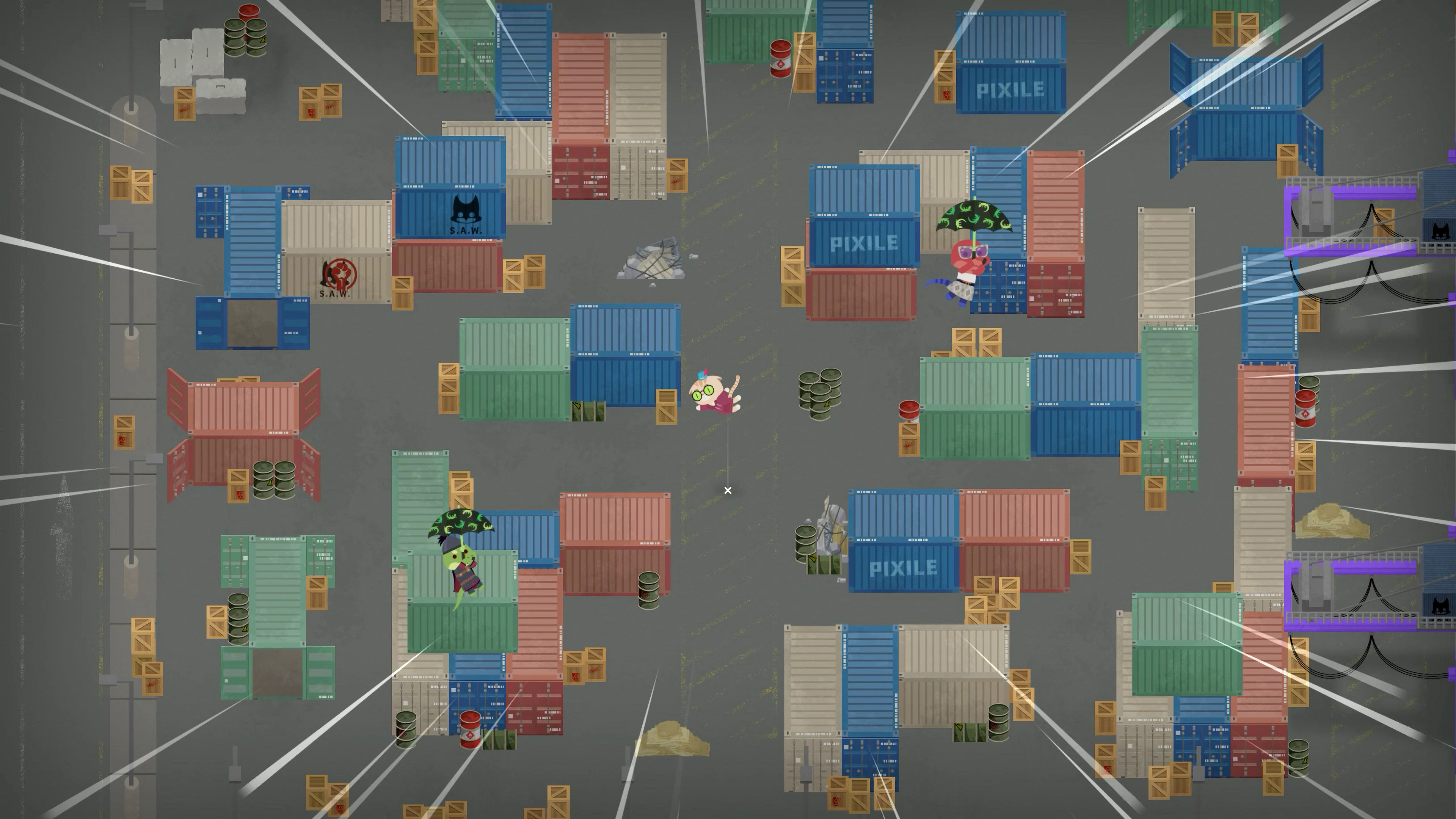 We’ve also updated the central region of Pixile Port to bring back something we all loved from the old S.A.W. Shipyards point of interest. There’s now a maze of shipping crates scattered all around to create lots of interesting pathways and cover to fight around. Just don’t tell the Forebeaver how much the beavers working at the port have been slacking in their container organization… 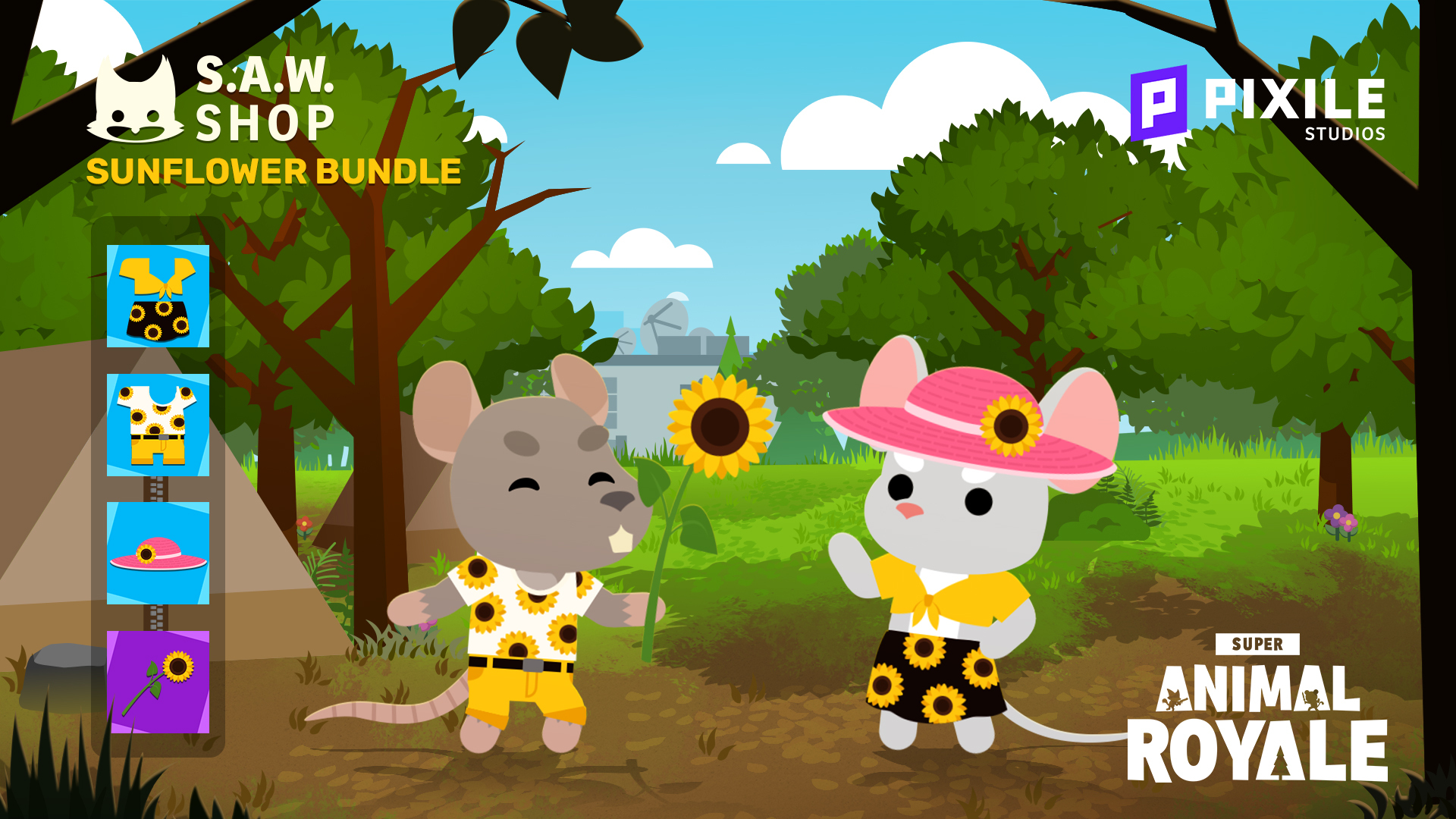 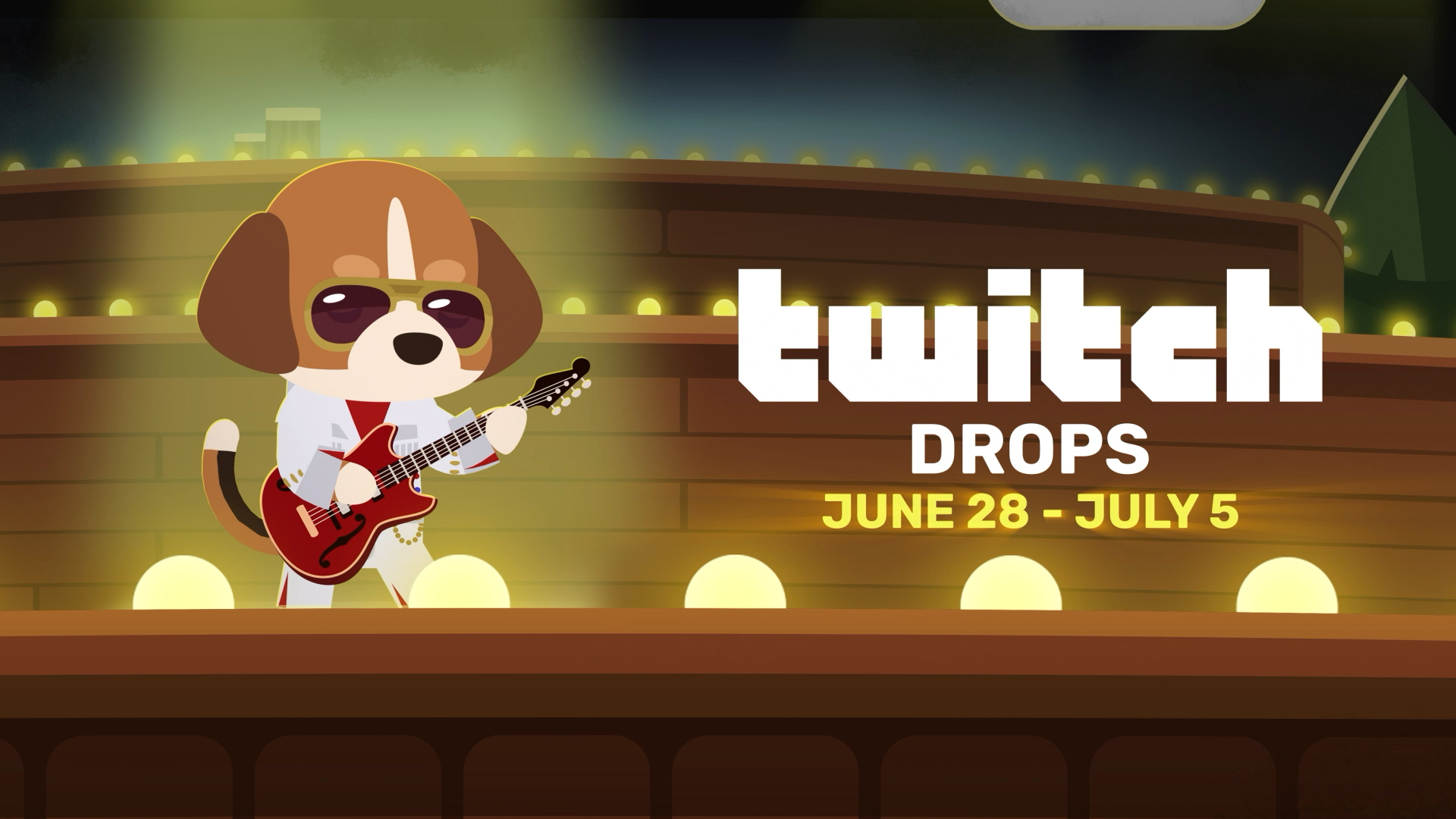 Quality of Life Improvements and Balancing
Bug Fixes
That covers just about everything for this Giant update, Super Animals! Get out there and gather that Super Lizard DNA, but beware… the ground beneath your paws isn’t quite so safe anymore.

Super Animal Royale
299
41
Where is the season 4 starter pack?!
I click buy start pack, throws it into the sale page!
20 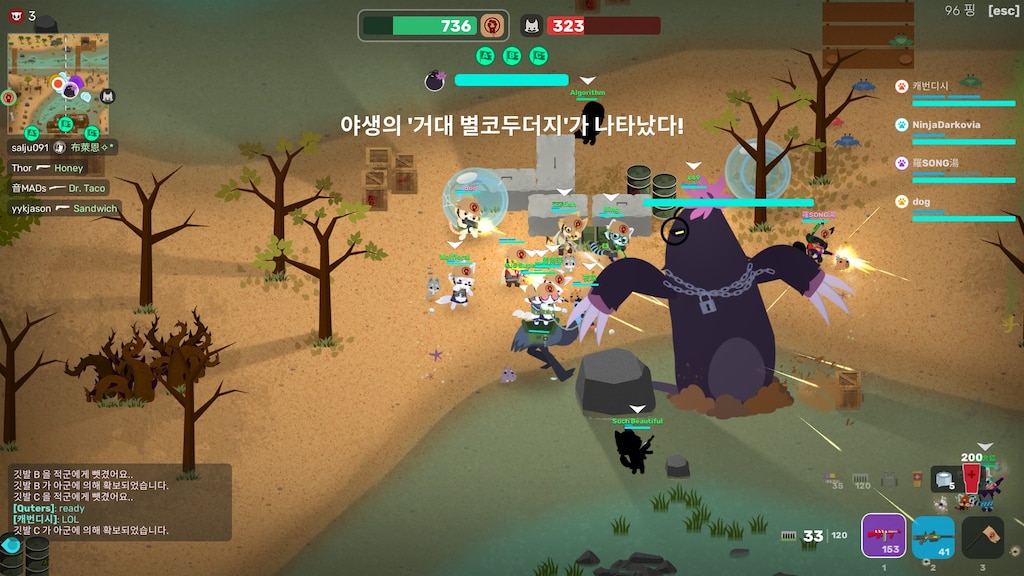 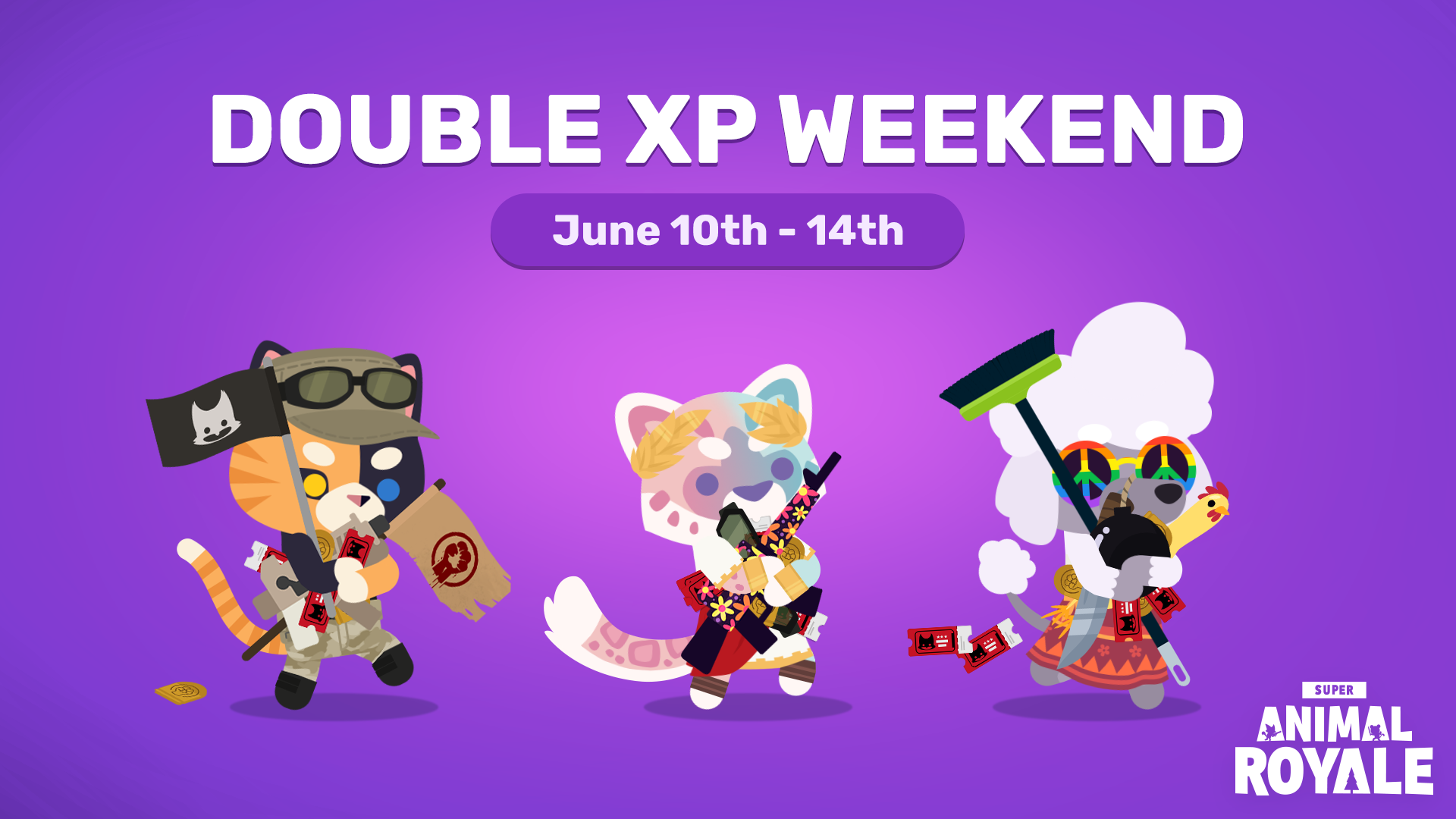 With Season 4 right around the corner, it’s time for another Double XP Weekend! From Friday, June 10th to Tuesday, June 14th all experience earned from games, dailies, and weeklies will be doubled! Perfect for anyone looking to finish off their Season 3 pass and any passes from the archive.

And just as a reminder: our Animal Passes do not expire! So don’t feel compelled to grind it all out before the season ends. Once a pass is purchased, you’re able to complete it at your own speed (but if you buy it during its season you get it for 550 tickets instead of 750). 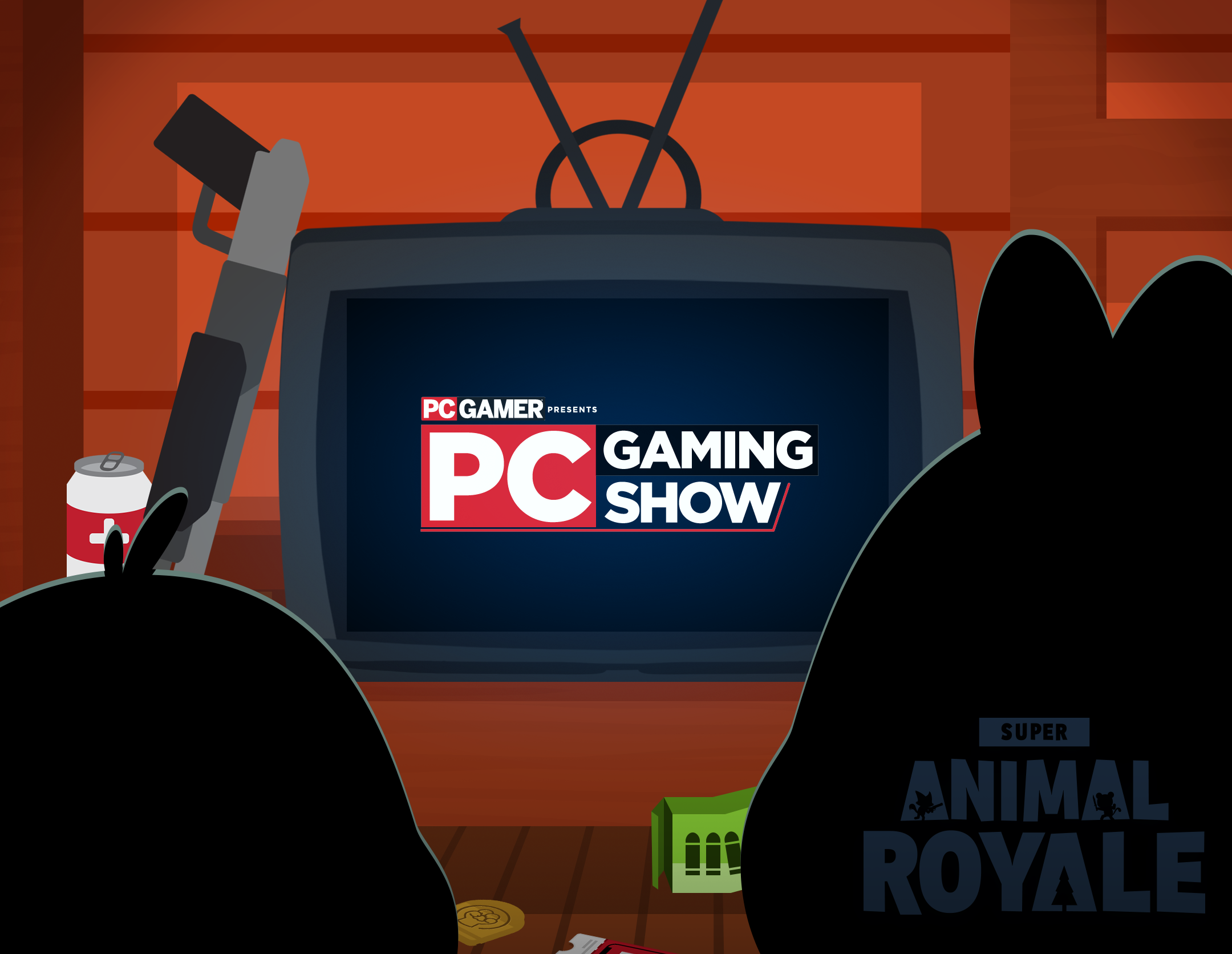 We also have a Giant Season 4 reveal incoming this Sunday, June 12th at 12:30pm PDT in the PC Gaming Show! Tune in live with us on PC Gamer's Twitch[www.twitch.tv] or YouTube channels for a short tease of whats coming in Season 4. ːcockatiel_hypeː

We’ll be sharing more news about Season 4 in the coming weeks on our socials, so if you haven't already, be sure to join us on Discord[discord.gg] and follow us on Twitter, Facebook[www.facebook.com], Instagram[www.instagram.com], and Reddit for all the news. 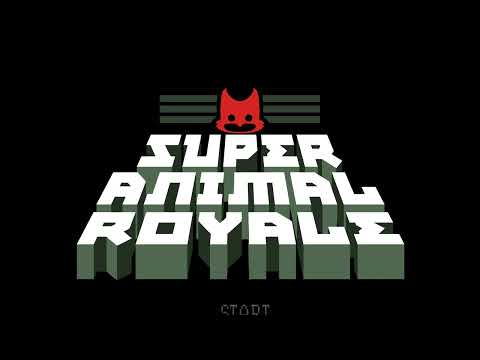 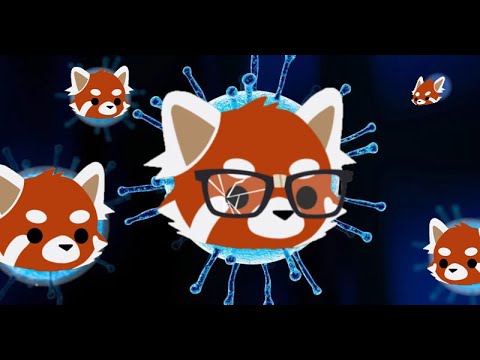 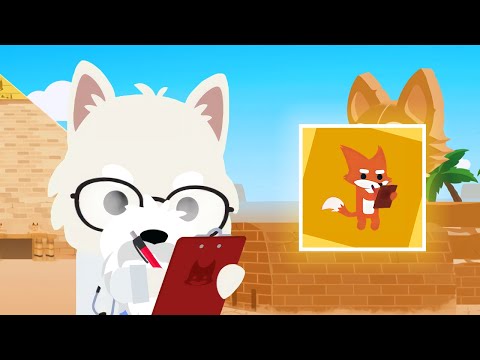 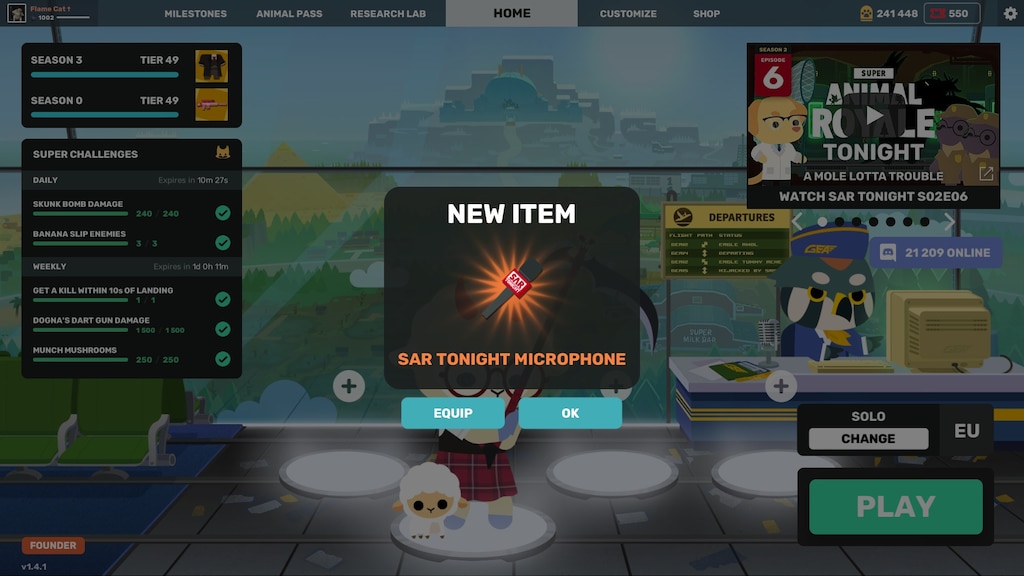 Recommended
10.8 hrs on record
originally got this game as a joke but it actually has really enjoyable gameplay, all the animals are quite adorable, and i absolutely love the events/frequent updates aswell. definitely recommend! 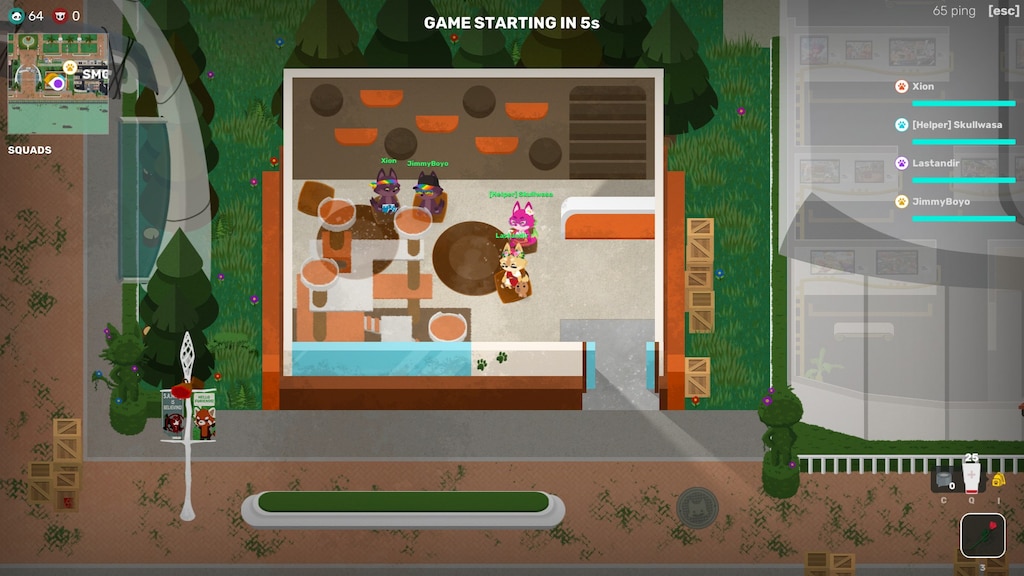 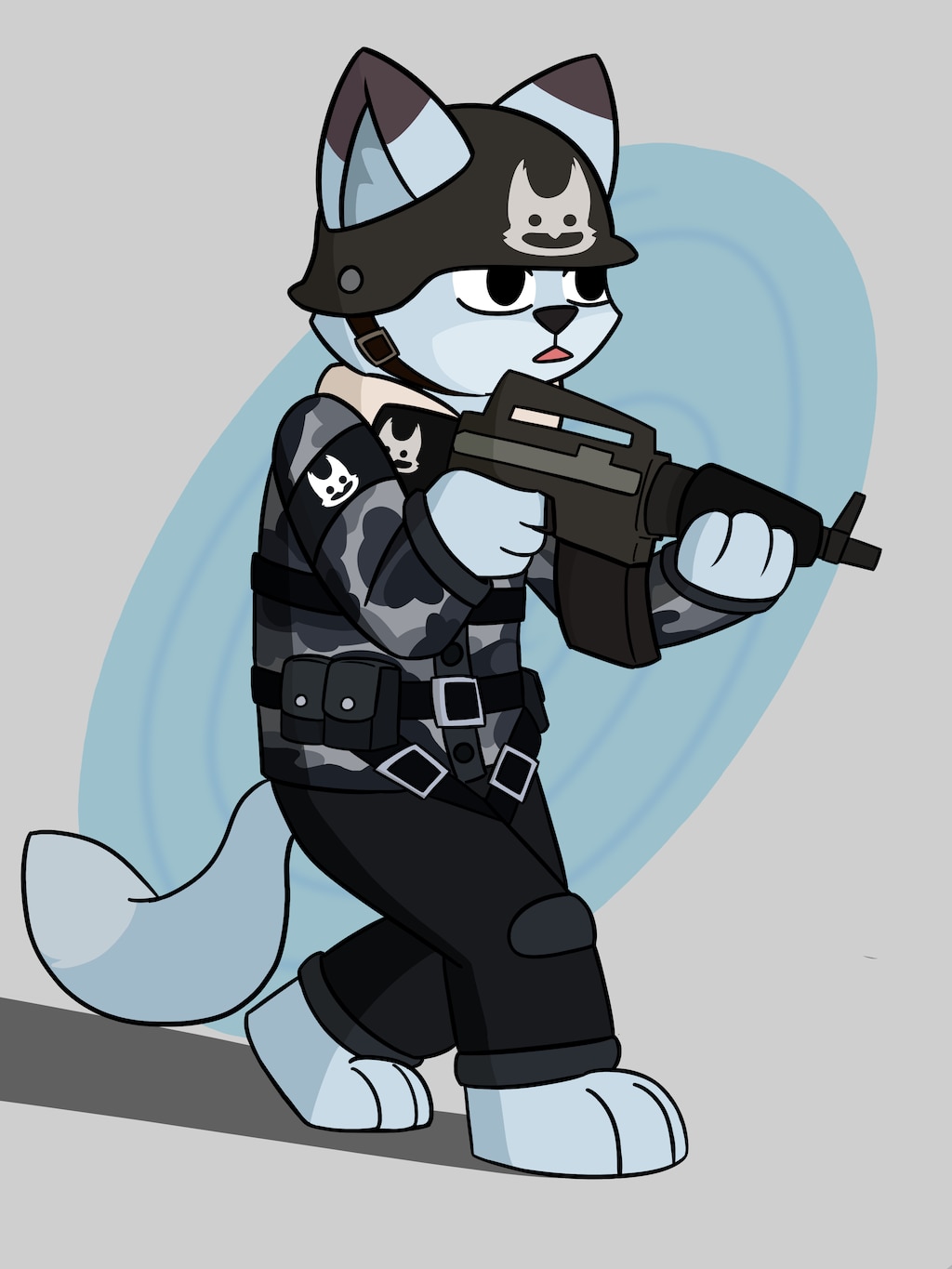 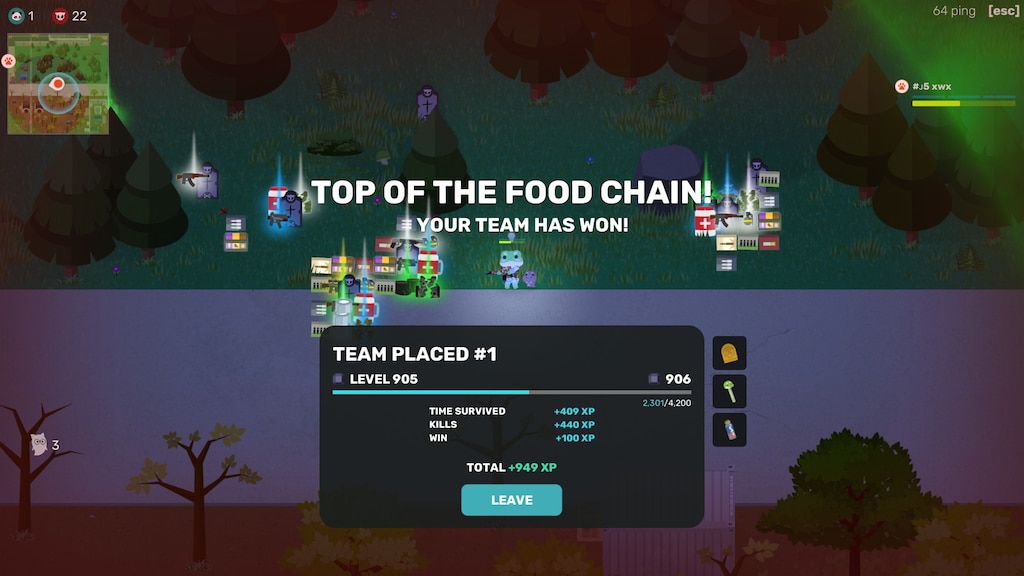 Recommended
53.0 hrs on record
LOL, this game is so much fun to play guys. XD LITERALLY.... Very easy & casual gameplay style, no need of aggressive playing yet sometimes the fights are quite a little bit of challenging. And I am a noob. :D Very well recommended to play solo or with friends to have some good fun. I just loved it. ;-) <3 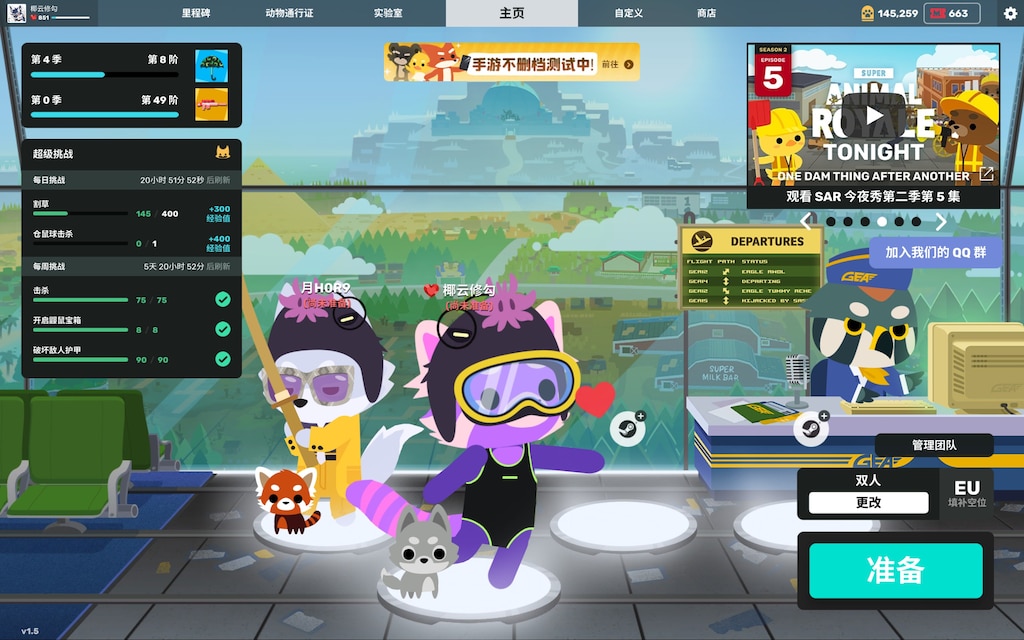 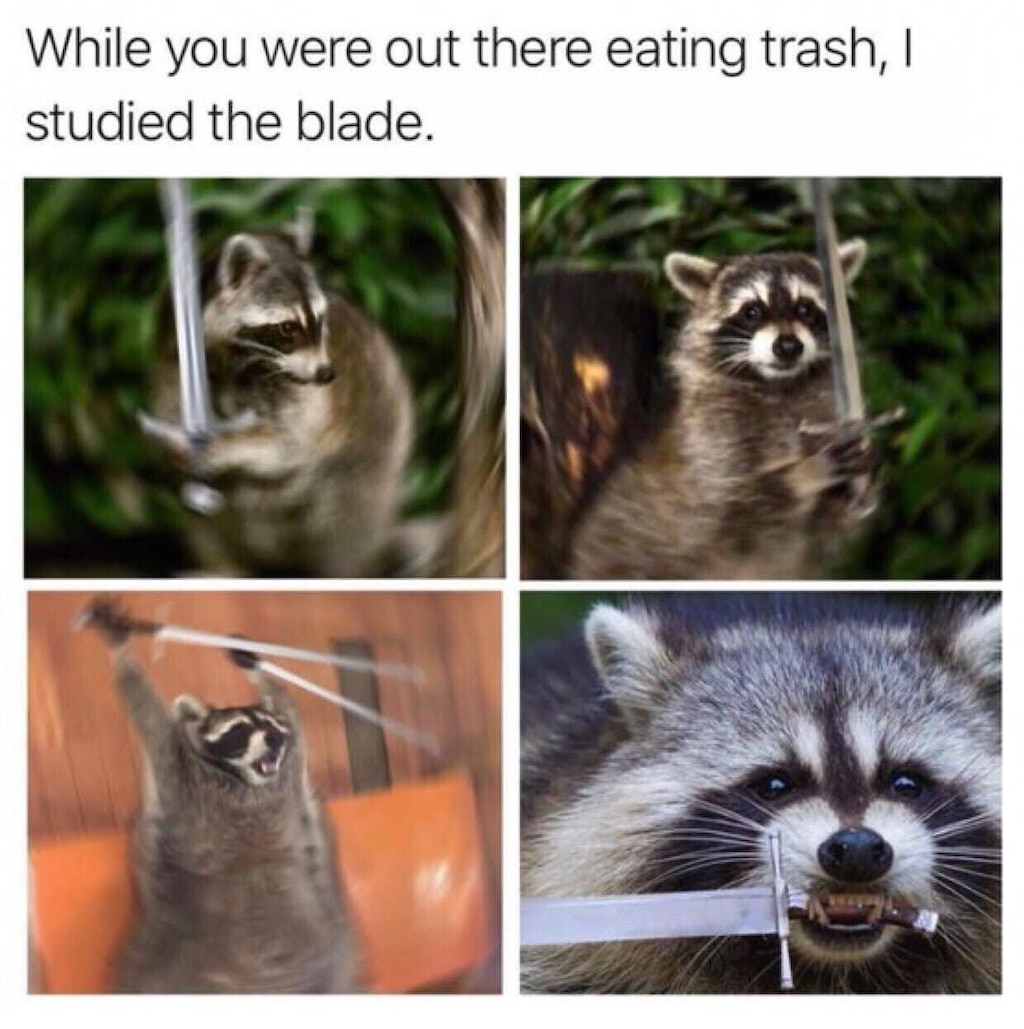 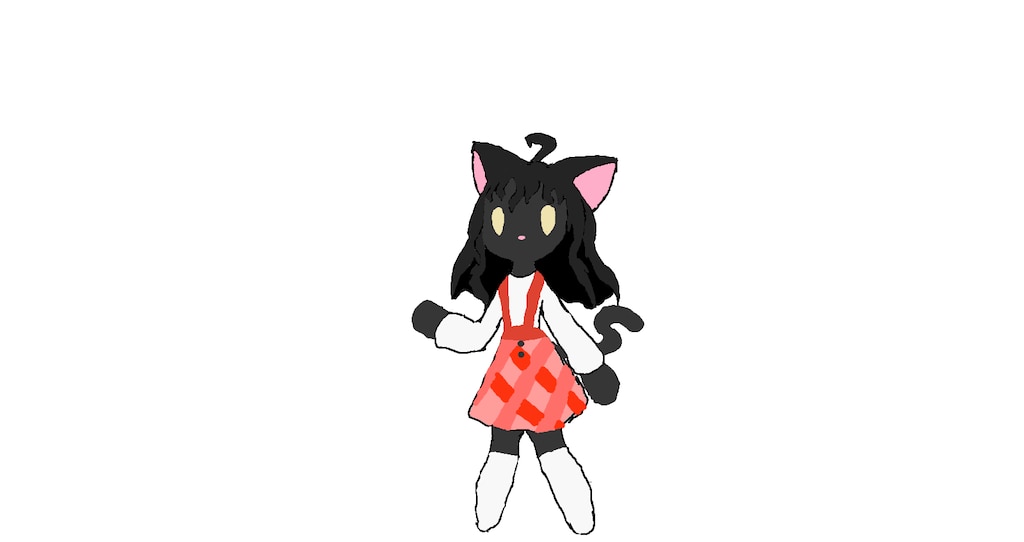 Recommended
13.3 hrs on record
Product received for free
I love it 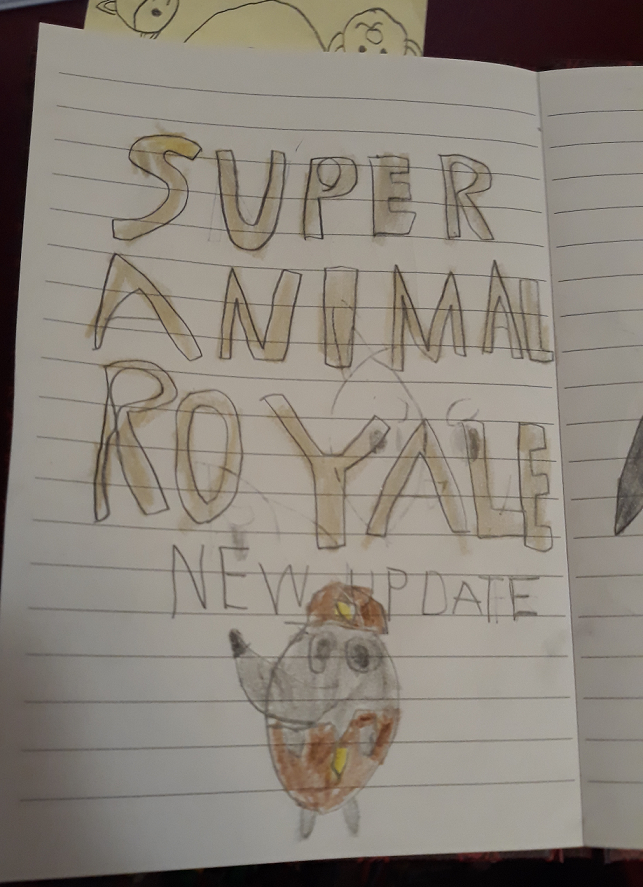 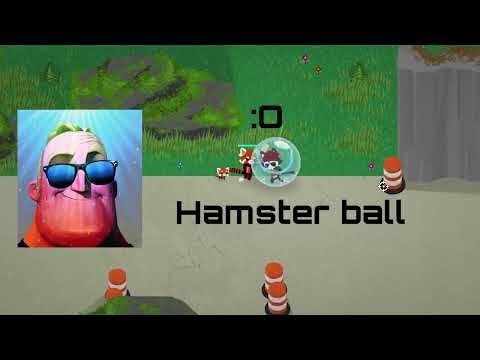 1
0
Who chases you on SAR. (Mr Incredible becoming canny.) 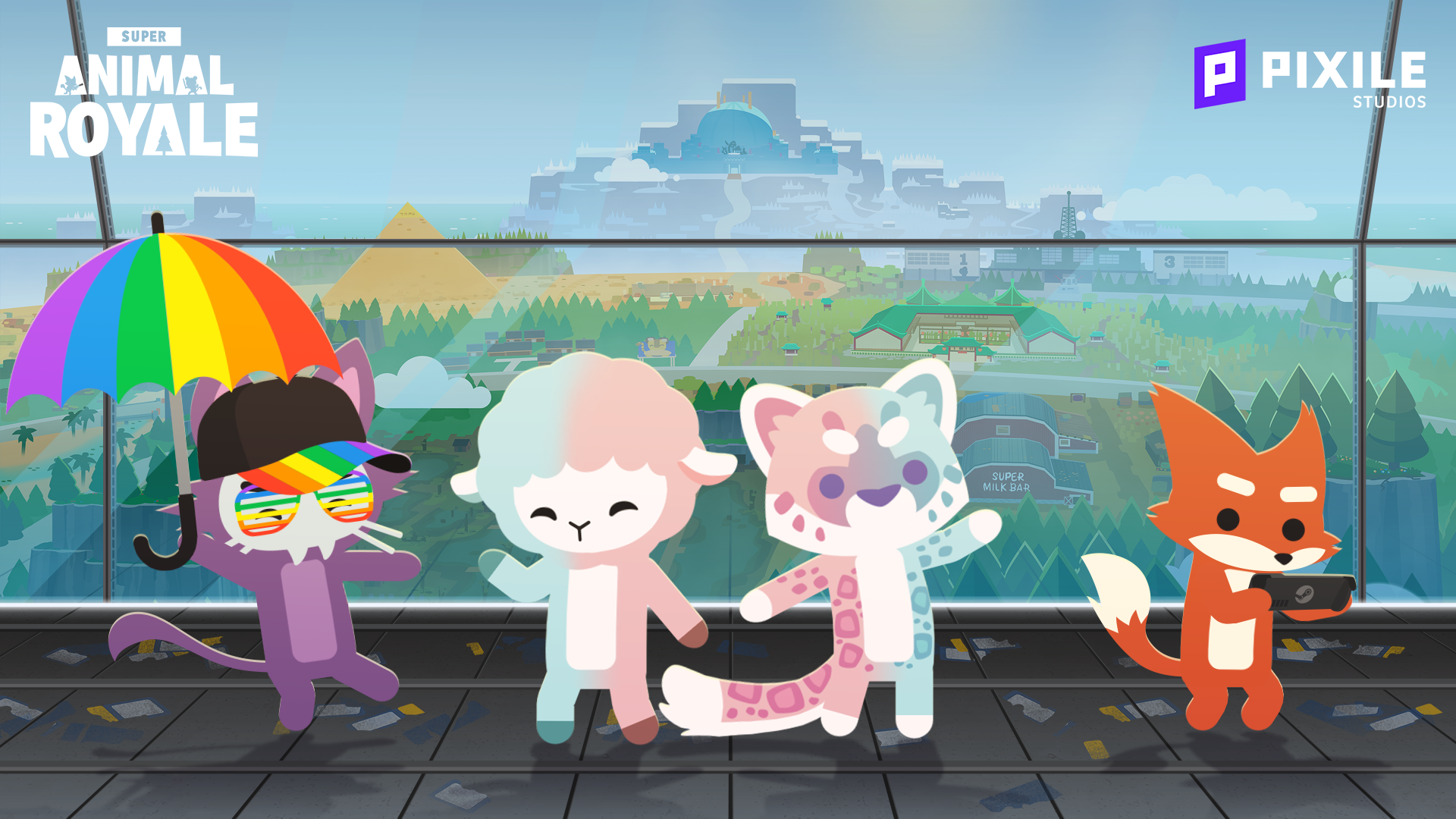 Summer is just around the corner, Super Animals! To prepare for the big Season 4 update (version 1.5) that will be landing this June, we’ve put together this small update to add some new critters, compatibility, and content to tide you over between seasons!

2022 has already been a big year for SAR, and there are even bigger and beastlier things on the horizon. In the meantime, here are some highlights from this small v1.4.1 update:
We’d also like to shout out Super Artist, content creator, and longtime community member, Kandi Kat, for the Super Cotton Candy Snep requests and inspiration. Thanks for letting us all know how much we needed a snep like this in our lives: you were right.

S.A.W. vs Rebellion
SvR 2.0 made a ruckus on the island in the 1.4 update, bringing new life and features to SAR’s first rotating game mode. We’re glad the matches have been every bit as chaotic and fun as we’d hoped for, and have some improvements in store to make them even better! 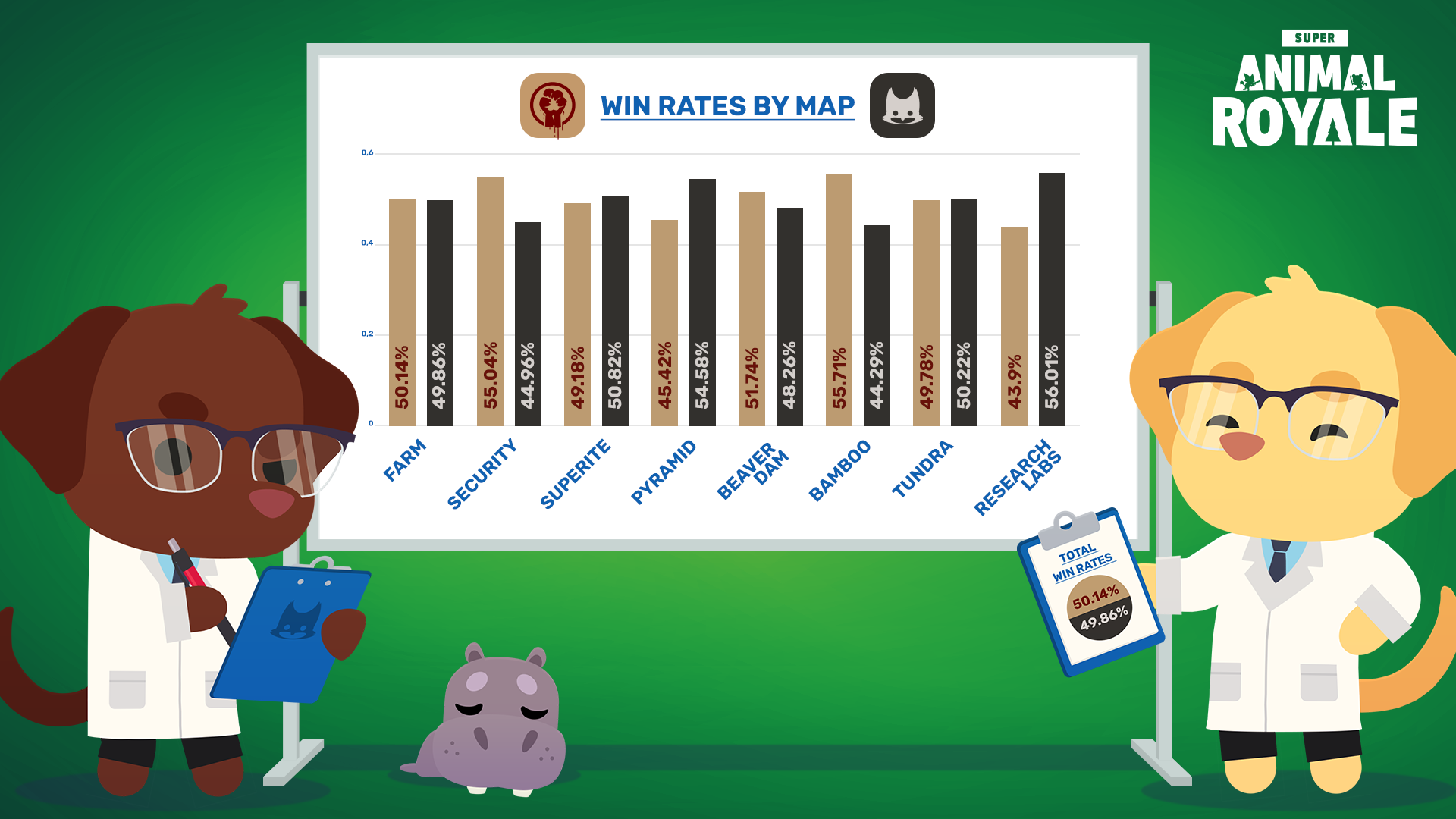 With help from the S.A.W. Lab Labs, we’ve tirelessly poured over the S.A.W. vs Rebellion data, and identified a few battlefields that could use some minor balancing!

Flag configurations have been changed for the following SvR maps: Battle of Bamboo, Operation Lab Labs, and Saharaland Skirmish. We hope these changes will aid in balancing these maps, and we have even bigger improvements for the mode coming in our June update!

S.A.W. vs Rebellion Gameplay Improvements
As always, we’ve been gathering and carefully considering your feedback, and have made the following adjustments and tweaks to provide better balance and improve quality of life:
If you’d like to submit feedback of your own about SvR or any other aspect of the game, be sure to share your feedback and join the discussion in our Discord server[discord.gg]! We have lots more in store for SvR fans in June. 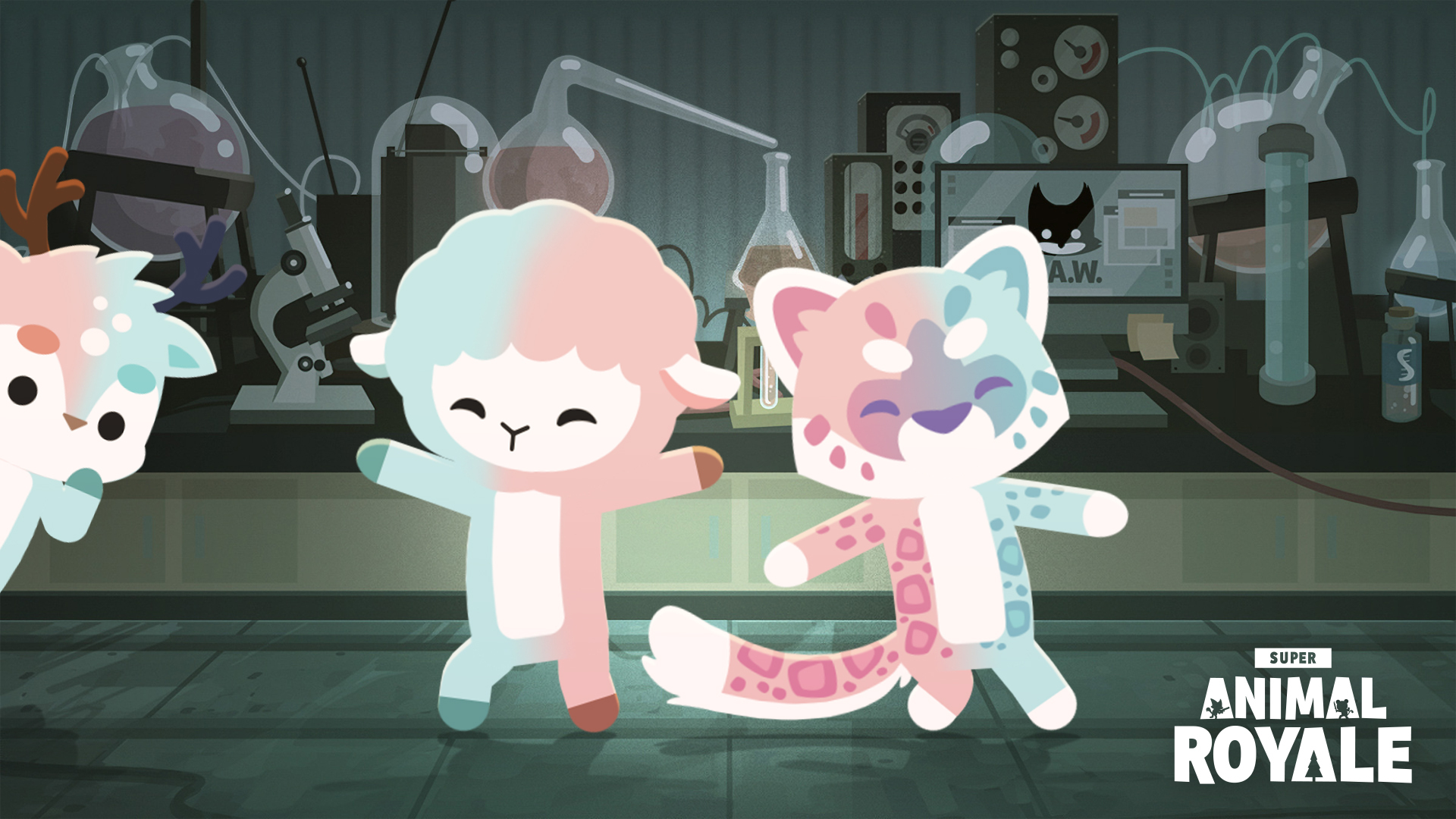 Thankfully, the magic of genetic engineering has helped make sure that wading in shallow water won’t cause these candy critters to melt away… probably! You can unlock them in the Research Lab under the Super Sheep and Super Leopard categories, respectively. 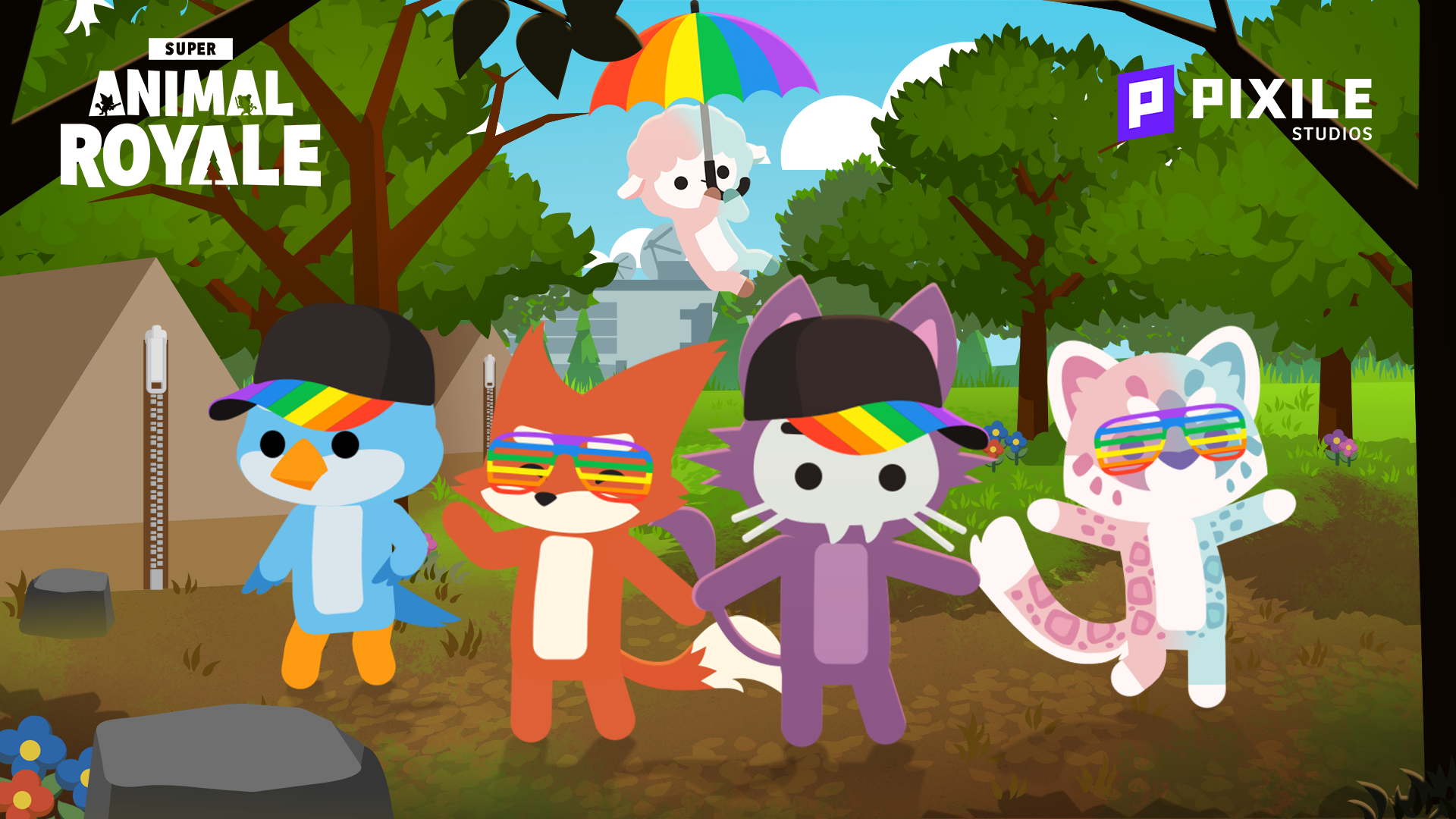 The LOVE bundle has a brand new addition: Rainbow Shutter Shades! To get your pair (along with the other two items, if you haven’t claimed the bundle yet), you can enter the code “LOVE” in the Coupon Code box, accessible from the Options menu.

Steam Deck Support
We have great news for Steam Deck players: full Steam Deck compatibility has been implemented, including text input support for the Steam Deck’s virtual keyboard. This means whether you’re on your PC or on the go, you can enjoy some tooth-and-claw chaos without compromising your experience at all!

Super Fanart Contest Crayons
We’ve patched the Green Crayon melee weapon into the update so we can start handing out codes to claim it for all those who participated in the latest Super Fanart Contest! If you participated, just watch your Discord for a DM with a code from our Community Manager, Logan, by the end of this week. From Pixile and the Super Museum of Modern Art curators, thank you for your beautiful and poignant submissions.

Gameplay and Visual Updates
Bug Fixes
That’s all for this update, Super Animals! We’ll see you on the island, and we can’t wait to share something Giant with you in the Season 4 update in late June.

ミ★ Mira ★彡
Jun 30 @ 12:49am
General Discussions
Mole Boss
So what was the point of adding that boss to this gamemode? To give the losing team a chance to win? Because all i see is more reason for the dominating side to win harder
5