Play with evolution! Species: ALRE is a scientifically-grounded, emergent simulation of natural selection. Creatures evolve and speciate in response to in-game mutation and selection forces, allowing you to experience and tinker with evolution in real-time.
$19.99
Visit the Store Page
Early Access Game
Get instant access and start playing; get involved with this game as it develops. Learn more.
Most popular community and official content for the past week.  (?)
0.14.0 has been released to the Experimental branch!
Aug 13
Species 0.14.0.Ex has been pushed up to the experimental branch. You can get it by right-clicking on Species in Steam, going to Properties, selecting Betas and opting into the experimental branch.

Features!
Eggs and Pregnancy Improvements
Creatures have two new genes, Egg length and Pregnancy length, the greater of which determines if they will lay eggs or give birth to live young. Eggs can be broken and eaten (though doing so will risk the wrath of the parent), and serve as a kind of ‘gateway food’ to carnivory. 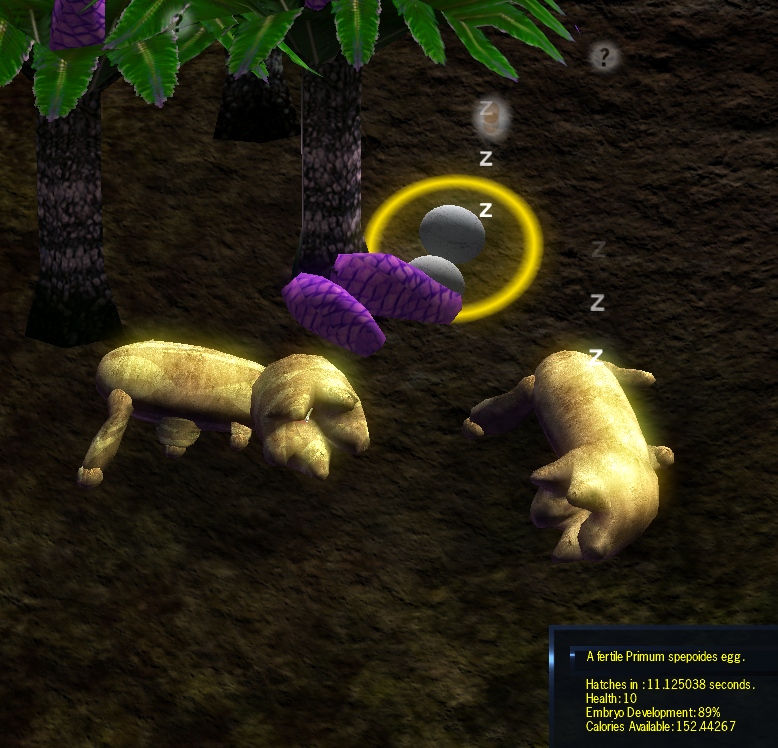 Reproduction is now much harsher, requiring a fair chunk of calories to be spent, and creatures have the option to postpone it if they don’t have energy they’ll need for it. Creatures can evolve a shorter and less costly pregnancy, but they do so at the expense of their offspring.

These reproductive changes seem to have had some good effects on the long term survivability of clades, making one species outcompeting the rest a less likely occurrence in this build.

Diet
Instead of diet being a simple binary spectrum between herbivory and carnivory, creatures can now specialize to feed on ground cover, foliage, fruit, eggs or meat specifically.

Temperature and Fatigue
Temperature is now a much harsher mistress, requiring creatures to seek shelter if they start burning or freezing. Creatures will also attempt to seek shelter before sleeping, as sleeping makes them even more vulnerable to these effects.

Ambient Soundscapes
I added biome-specific ambient soundscapes, plus a few for things like water and altitude, to fill the void of sound in between music tracks a bit. 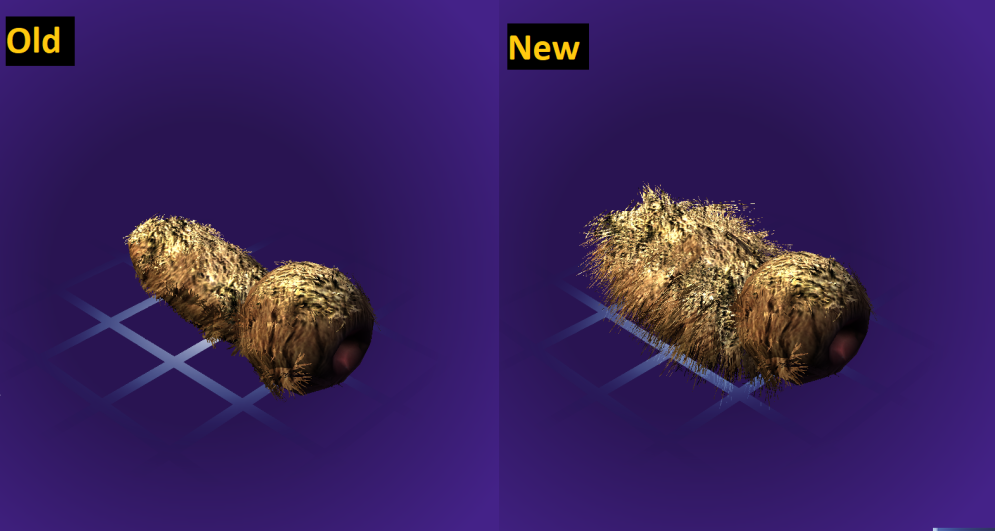 It won’t look quite like this in-game: I’ve yet to implement fur length or floofiness genes, so I had to crop it short. But a floofiness gene has now become vitally important to the games future development. Honestly, I don’t know how we’ve gotten this far without one.

Stability Improvements and Bug fixes
So many bugs. So many. Their cries still haunt my nightmares, and yet I continue, for the work is not yet completed. I have become less man than monster, but I swear to you truly: it was for the greater good.

Other bits and pieces!
Regrowth based population control. You can now set the Automatic Population Control to affect plant regrowth instead of food efficiency. I’ve not made this the default because it’s less responsive, resulting in more extreme population explosions and crashes.

Thought Log.
Press ‘T’ to show the thought log. This was only ever intended as debug functionality, but it’s cute and it gives the creatures a way to voice the incredibly messed up reasoning behind their incredibly stupid decisions. 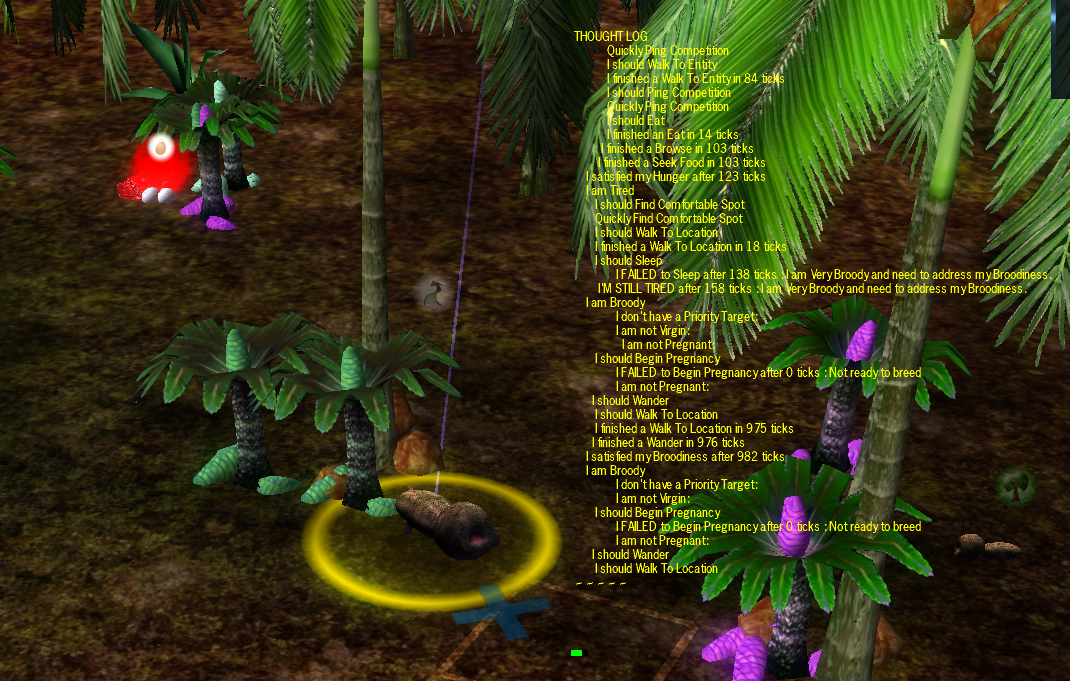 Background tweaks
There have been a metric ton of these. Everything from speed calculations to fatigue energy delta’s to how buoyant creatures feed on underwater plants has been tweaked, adjusted and/or re-built.

Technical Changes
The usual disclaimers apply about this being a first-release beta (aka. an unstable and bug ridden mess), but I will note that a great many issues in the 0.13 releases have been fixed. Expect a whole new ecosystem of bugs!

Seriously though, while I have fixed as many of the existing issues as I could reach, 0.14.0 is built on a completely different foundation than 0.13. Monogame 3.8 has significantly changed under the hood from previous versions, and I fully expect that to cause problems, particularly with the Linux and Mac builds that I was unable to test before now.

This background change will also cause it to take up a fair bit more hard drive space than before: the current release clocks in at 687 MB, and I may have to increase that further to ensure the cross-platform builds have all the files they need to run and that nobody will be asked to manually download .Net Core.

Please send me an email or contact me on the unofficial discord channel, or just the Steam forums, if you experience any crashes or just , so I can get them fixed prior to pushing anything to the stable branch. 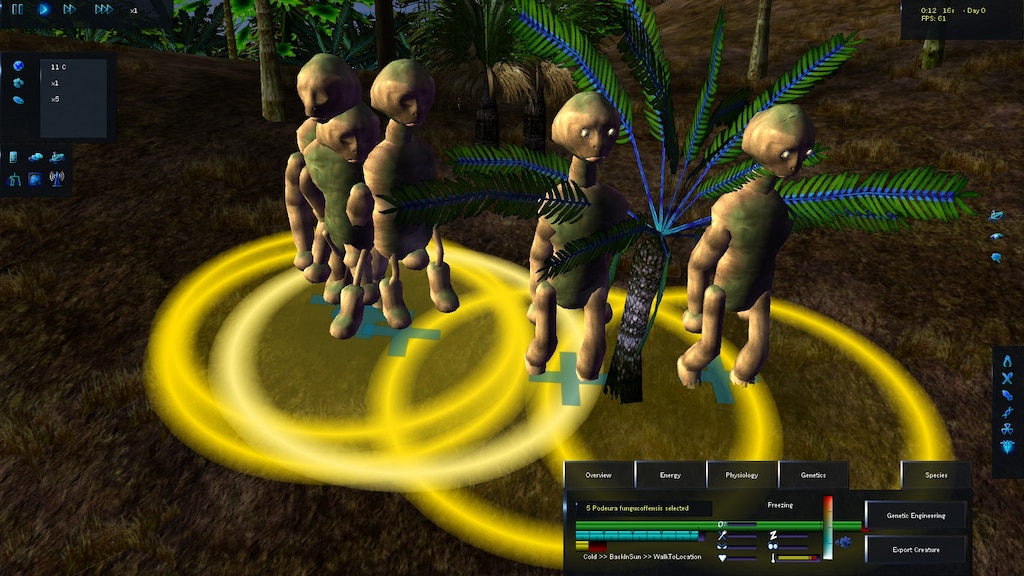 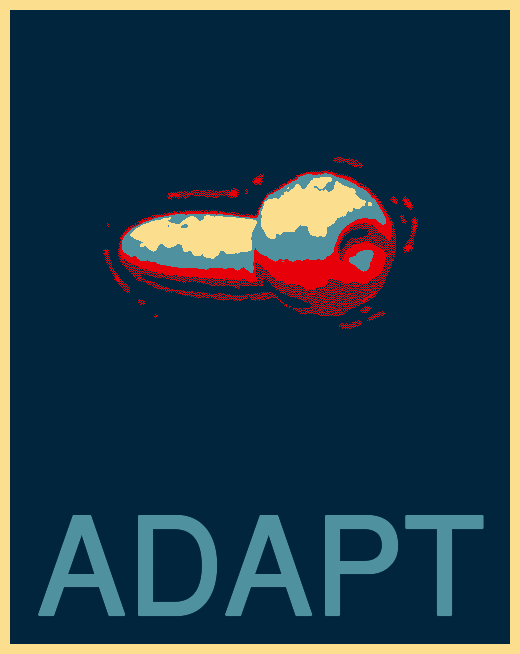 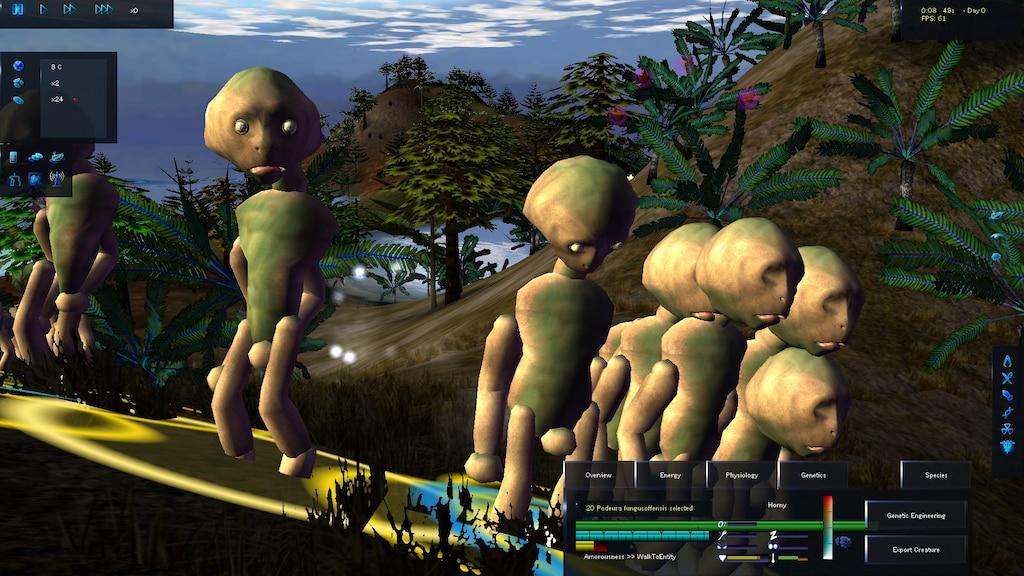 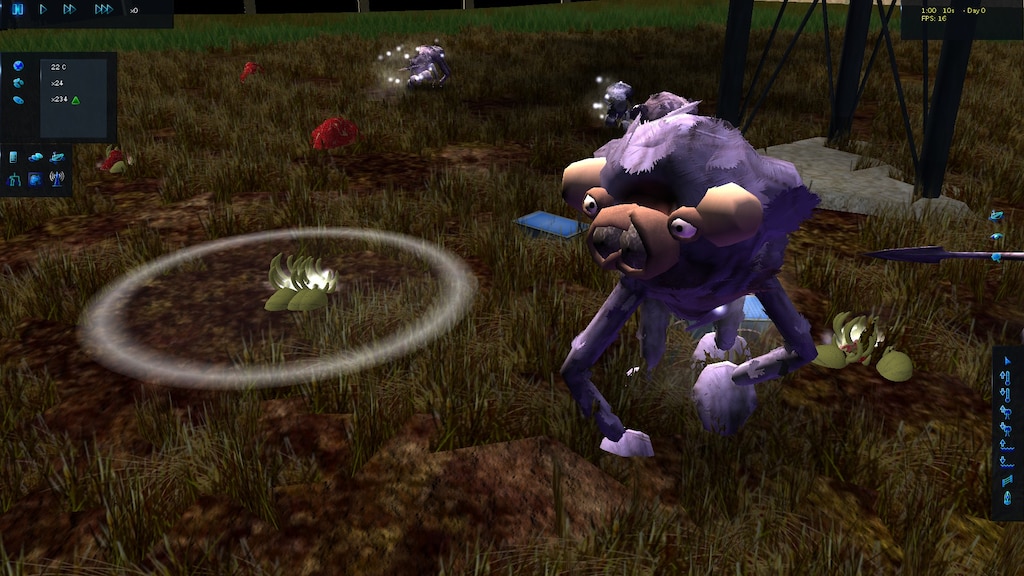 1
14
My first species I ever made I love them 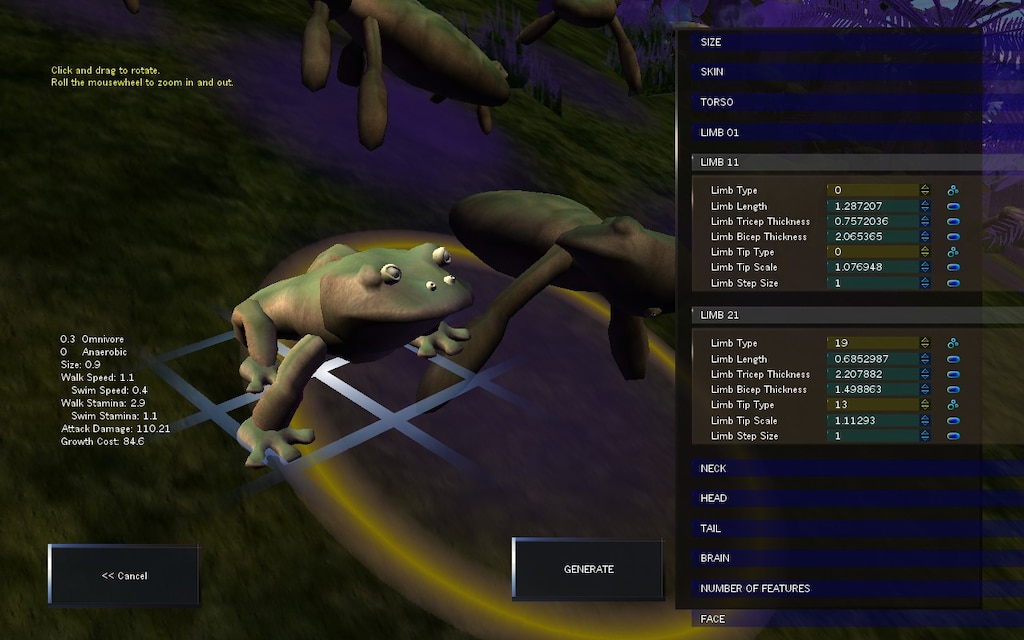 Understanding Some Basic Concepts and Mechanics
** WORK IN PROGRESS ** This guide is subject to chance as I learn more stuff and/or the game updates This guide is intended to provide some basic understanding of how to set up and play the game to end up with something resembling the results you had ...
32 ratings

Custom-creating your creatures
Tired of your worlds being ruled by stale potatoes and beaky, twig-like abominations? Have you ever wanted to just make your own creature, but you can't seem to get the creatures in your nursery to evolve? Well, I may have found you a solution. 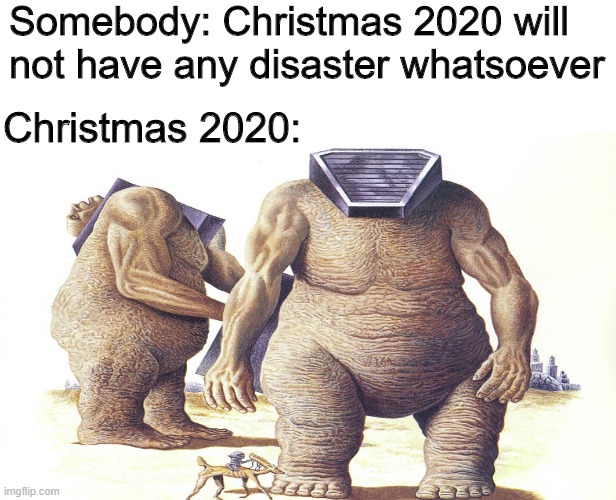 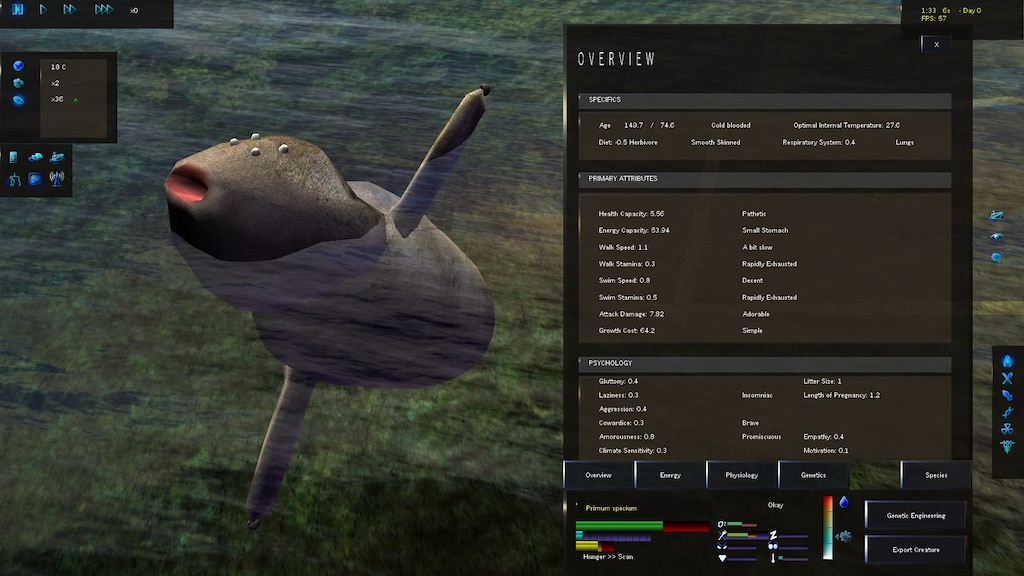 Skin Guide
I've put together a quick reference for what number equals which skin type so you don't have to.

Custom Initial Creatures
This Guide will help you in getting a custom set of creatures that you made or you found on the workshop to initiallize into your world, to either challenge yourself with poor creatures which should die and need a gods helping hand or have some OP worms th... 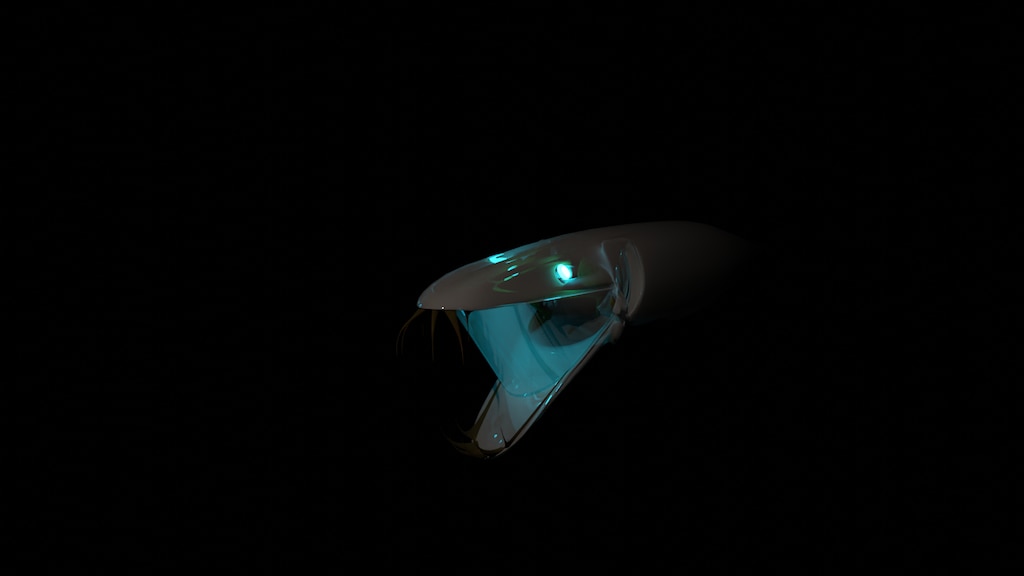 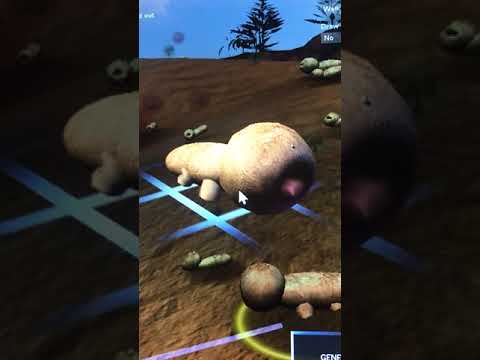 Deano
View videos
Crashes immediately on launch with newest experimental
This error happens before even the screen goes black (for normal game loading), which means that it happens far before I can do anything. I also moved the contents of my Saves directory as I thought that might have helped, judging on the error message, but that isn't the case. Species has exploded Sorry! The game hit a problem I didn't anticipate and Species had to quit. If you email the bug report below to qu.quasar@gmail.com, I can look into it and might even be able to find out what caused this mes...
3

SpaceDrive
Aug 16 @ 2:18am
Bug Reports
Meat
Creatures seem to not care about meat at all. Even when aggressive ones attack and kill others they just wander away to find grass or plant to eat.
2

Крыса в Носках
Aug 15 @ 3:26pm
General Discussions
On the subject of eggs...
Jun 24
I don't intend to just slap egg's on top of the existing game: they're just one aspect of some fairly fundamental changes to creature diet, behavior and especially reproduction.

In this last week I've shared a fair bit about those changes on the development blog, here:

Head on over and take a look if detailed overviews of semi-technical changes sounds like your thing! Or if you like chooks. There are pictures of chooks in the second one.

I have posted the full details of my hiatus the Species development blog. I'll provide a shorter version after the link, but I'd recommend reading the full story here:

An update, an explanation and an apology[speciesdevblog.wordpress.com]

Keeping it simple: I was suffering from untreated mental illness, which I am now getting treated. Thanks to finding the right medication for me, I have more motivation and energy than I've had in many years and am eagerly throwing myself back into development.

I'm sorry for seemingly abandoning the game. I don't think there was anything I could have done to prevent the hiatus, but I should certainly have communicated my situation better. I have no excuse. I'm sorry.

Species 0.14.0 is on it's way: it will introduce eggs to the game, as well as including a significant overhaul to pregnancy and diet, and a number of notable QoL improvements. And yes, I'm planning to dedicate a good long while to tracking down and eliminating those irregular crashes. The most common ones have already been addressed.

I hope in time, with regular releases and my fair share of hard work, I can regain your trust and help rebuild the wonderful community that formed around this little game.

Species: Artificial Life, Real Evolution
966
145
No one has rated this review as helpful yet

Recommended
2.0 hrs on record
Early Access Review
Its so good buy it now

Recommended
46.2 hrs on record
Early Access Review
Basic but fun evo sim, interesting results are frequent and it's full tools to play with.