Get ready for demonic aliens, cyber-mechanical vehicles, and interplanetary chainsaw warfare! Doomtrooper is a digital adaptation of the physical card game by the same name. Play Warrior cards to form your squad and earn victory points by eliminating the enemy's forces. Now in Early Access!
Visit the Store Page
Early Access Game
Get instant access and start playing; get involved with this game as it develops. Learn more.
Most popular community and official content for the past week.  (?)
0.8.12 - Weekly Update, Oh my!
Sep 16 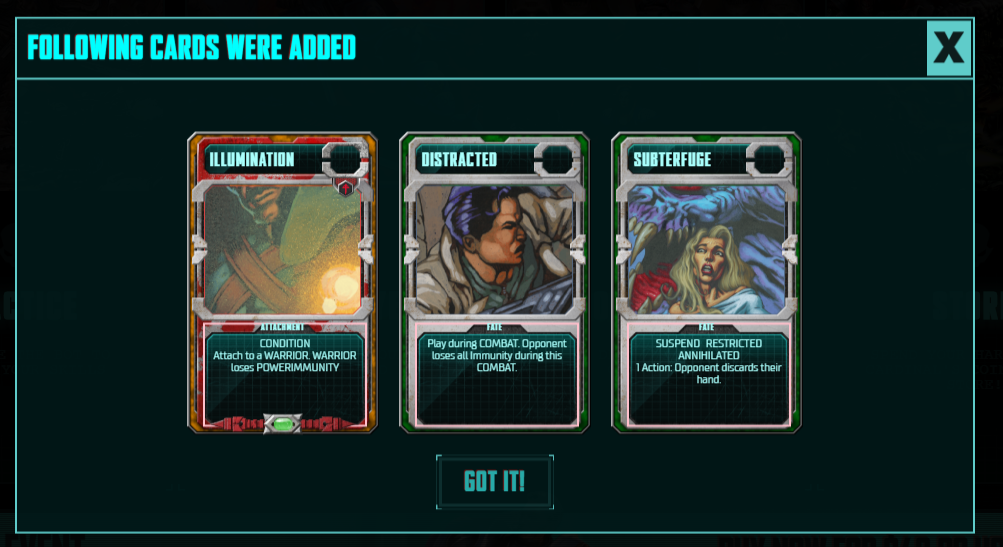 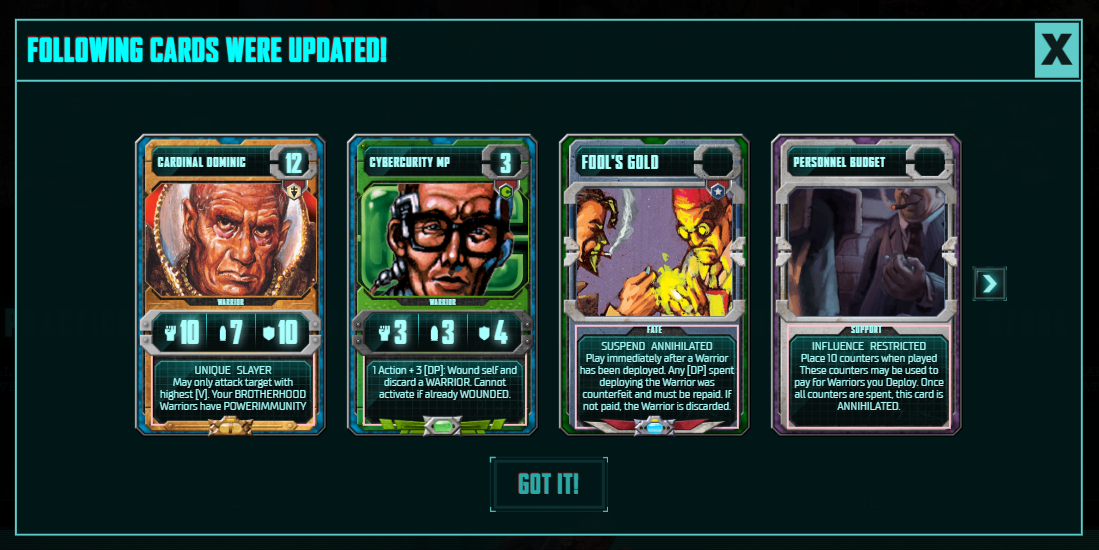 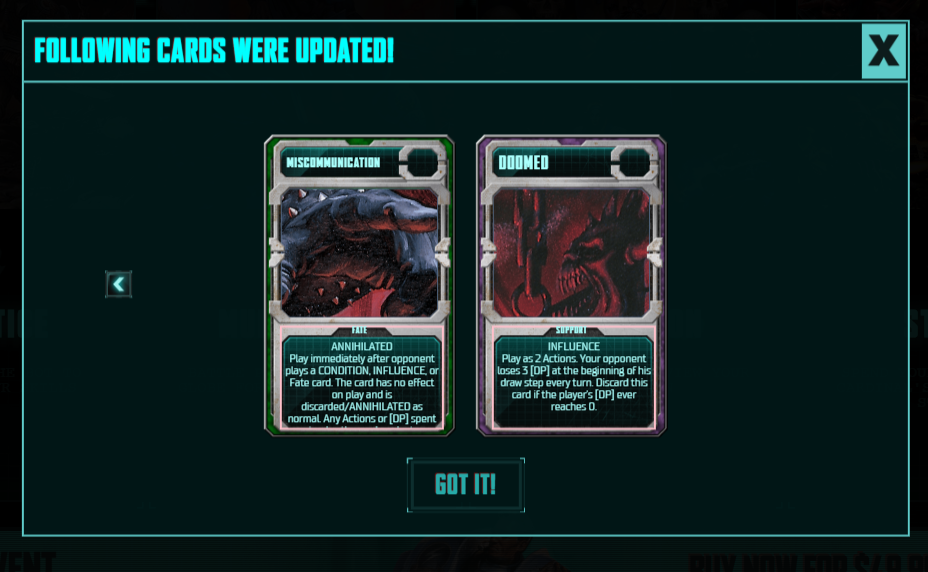 This week was round two of stability fixes. The bugs people were seeing were coming from some old code another programmer wrote that took me (Justin) a minute to get familiar with. After 0.8.11 we found some more issues with timers and interrupts causing some strange behavior and I had to dive back in.

But as of today (Wednesday) I'm happy to report we've had NO errors reported on the backend and no users reporting any issues with timers/interrupts/combat so we may have made it through!

On a funny note, I went to bed about 1am Monday night/Tuesday morning and woke up at 8 to TONS of hate mail about subterfuge. Totally OP card (Blame Bryan, he designed it/picked it for this set!) and I apologize. A few minutes after my coffee kicked in I patched it to be RESTRICTED (one per deck) and ANNIHILATED (removed from the game after being played). Fastest nerf in history.... but thanks for reporting!

We also brought back an ability we lost on Dominic where he is only allowed to attack the biggest MF-er on the board. I know this isn't ideal for all of you wielding your 3x DOMINIC strategy but this is what the kids call "balance". He's big and scary, but he has a weakness. Like the scales of justice, he will balance the masses.

Now that the game's timers are stable, I'll be able to dedicate more time to fixing Young Guard and his ability interrupts, wrapping up the 0.9.0 update with the new updated Deckbuilder and FINALLY launching the Cybertronic revamp with AUGMENTS. It's gonna be awesome.

See you next week! 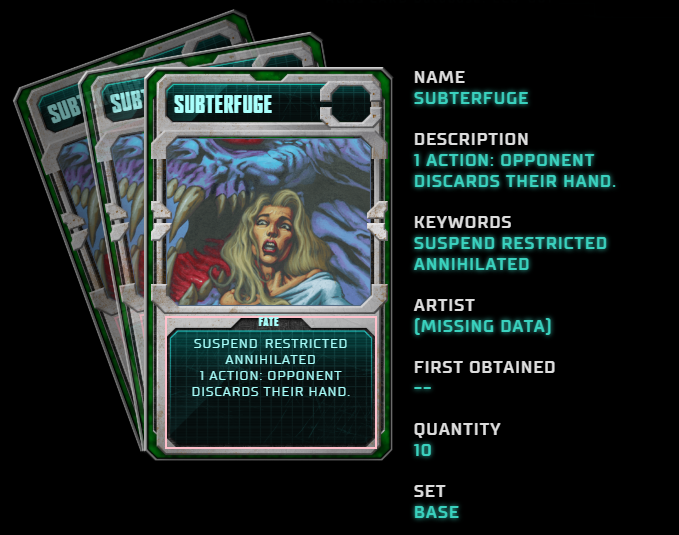 PS don't forget to come hang out on twitch! Programming streams Tues/Thurs nights at 8pm PST and a Doomtrooper community stream every Sunday at 11am PST!

Doomtrooper CCG
5
0
It's about Time!
With the over-saturation of Warhammer 40k games on the market, I'm glad to finally see a release of my favorite franchise finally get the digital treatment it so rightly deserves. Maybe this will open the doors for a MC-based RTS, MMO, and 3rd-Person Action RPG to be released in the future?...
1 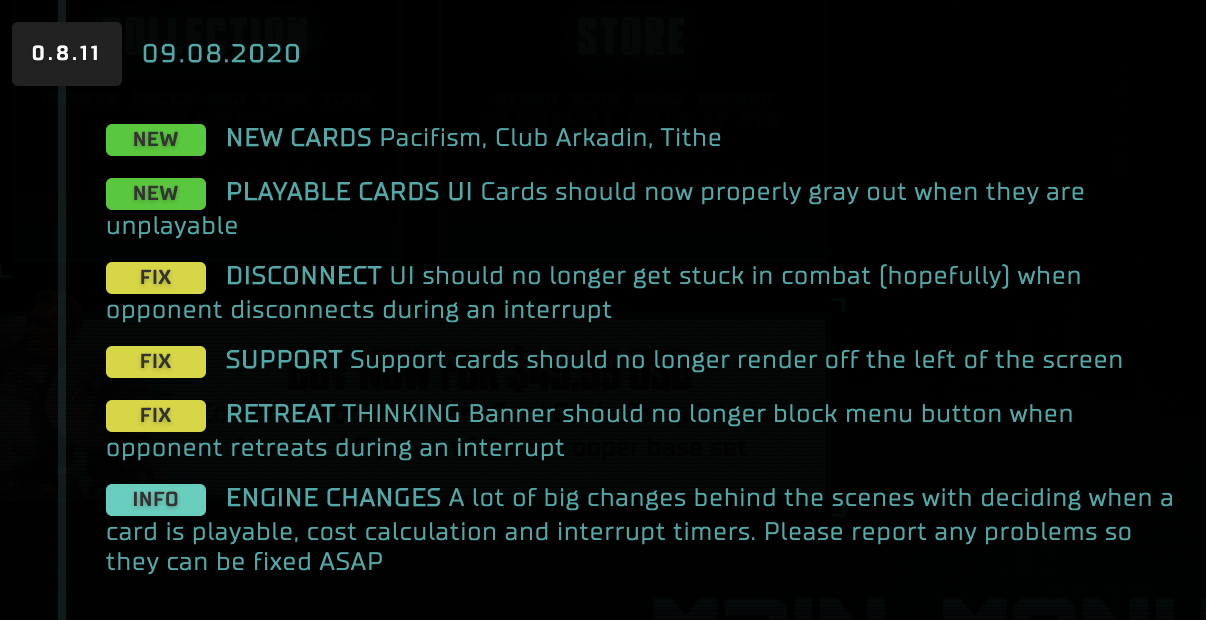 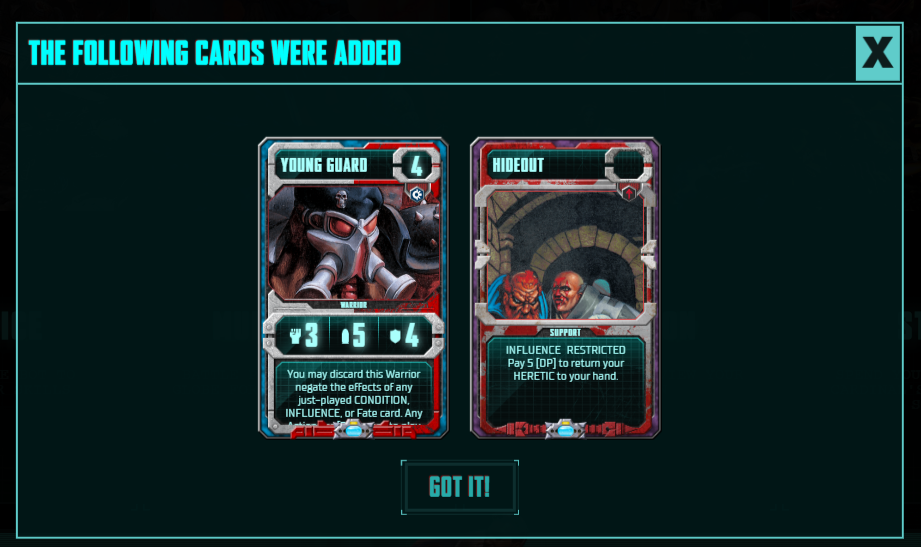 This week a lot of time was spent behind the scenes working on some long standing bugs regarding stability and user experience. The code for timers (turn, interrupt, combat) was rewritten and some bugs worked out. Then the code for choosing whether a card show be "playable" based on the current game phase was improved. Next we'll be updating card text to make sure its all consistent and clear so new players have no confusion in understanding when a card is playable!

The biggest changes this week

- Disconnects should no longer break turn/combat/interrupt timers on edge cases (causing UI to freeze/game to get out of sync)
- Cards now should gray out when they're not playable during all game phases (should be a big step towards helping new players learn)
- Support cards will no longer render off screen (commonly reported!)

Next week is looking to have a bit more content added with new cards and stat updates. Plus we should be showing off the season rewards for this month as well. See you then! 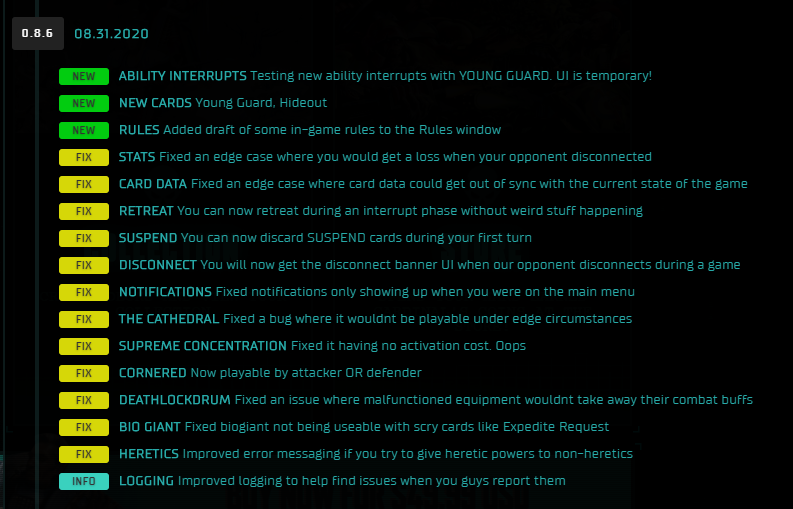 This week was mostly focused on stability! We spent a lot of time working on tracking down some old bugs and found out that a good number of "weirdness" came from if you tried to retreat during an interrupt phase. We tracked down that issue (which led to a few other edge cases) and fixed them

We also fixed a bug that was preventing us from launching the new "ability interrupt" cards for testing. So we added YOUNG GUARD to get feedback on the new system and will be adding a better UI and more cards that allow you to activate them during interrupt phases this week and moving forward!

As always, thanks for the help and the feedback! We read everything we can find that you guys post all over the internet and are working hard to improve on things such as the UI, the speed of the game, the card balance, the new tutorial and improvements to the practice AI!

Starting this month with the new deckbuilder we've been working on, we'll be tackling these big topics a little every week so keep the feedback coming!

Doomtrooper CCG
4
0
devs
If I got it right, this is the digital version of the 1994 board game. I didn’t play the original, but the mechanics seemed to remain the same, very incomprehensible effects of some cards and combat with damage. We need Russian for our community, but the game seems to have potential and is interesting in general!

Grand Duke Mushroom of Gelre
121 products in account
0
Nostalgia indeed.
Hello. French player here, had played the CCG when it was out in France (a bit after '95, if i am not wrong). Had choosed it over Magic cause i was playing the Mutant Chronicles RPG at this time, and had put a lot (too much, in fact) money in it. Which is one - if not the main - reason i will not support the game if it remains in a "buy packs with random cards in it" economic model. If it had been a fixed price game (with eventually a few DLC), i would have back it, but one with packs ? Why bother when t...
9

crimsonlegion
Aug 23 @ 2:47pm
General Discussions
Game does not launch in Linux
I've downloaded the game (with no pending downloads) but it closes instantly after play button is pressed without an error. How could I track the issue (a log probably?) ? Thanks in advance! Hope we can try this promising game in Linux! Specs: NVIDIA GeForce GTX 650 Ti [Nvidia Driver] 440.82 MX Linux 19.2 with latest updates [Linux kernel] 4.19.0-10amd64 1.0.0.64 Flatpak...
3

Δικαστής Κάφκα
Aug 30 @ 10:30am
General Discussions
Factions
In the product description it is mentioned that 7 factions will be playble, so Legion, Brotherhood and Corporations. What about Tribes from Lost Eden? Are those also be implemented in time? Mechanics of collecting Code Skulls to win was one of my favourite decks....
6

Recommended
803.2 hrs on record
Product received for free
Early Access Review
I'v played for 793 or so hours just on steam, I LOVE this game, the team over at Secret Cow Level are killing it... The Digital DOOMTROOPER succeeds where the paper version failed. It doesn't get better than this on a Beta version... The game is still in the development process... However, it is already a lot of fun and the factions are well balanced... There is a great community on Discord for suggestions. I have seen players make suggestions in Discord and some have made it in to the game...

Recommended
316.8 hrs on record
Product received for free
Early Access Review
Steam says I've played 309 hours of DOOMTROOPER. I'm not sure this exactly correct but it isn't far off. The Digital DOOMTROOPER succeeds where the paper version failed. It doesn't get better than this on a Beta version. The game is still in the development process. However, it is already a lot of fun and the factions are well balanced. There is a great community on Discord for suggestions. I have seen players' suggestions make it into the game.