Cogmind is a sci-fi roguelike epic in which you play a robot building yourself from components found or salvaged from other robots. Explore a living, breathing world through turn-based tactical combat, or sneak, hack, and fly your way to victory.
$19.99
Visit the Store Page
Early Access Game
Get instant access and start playing; get involved with this game as it develops. Learn more.
Most popular community and official content for the past week.  (?)
SITREP Saturday #48: Volatile Times
Apr 1 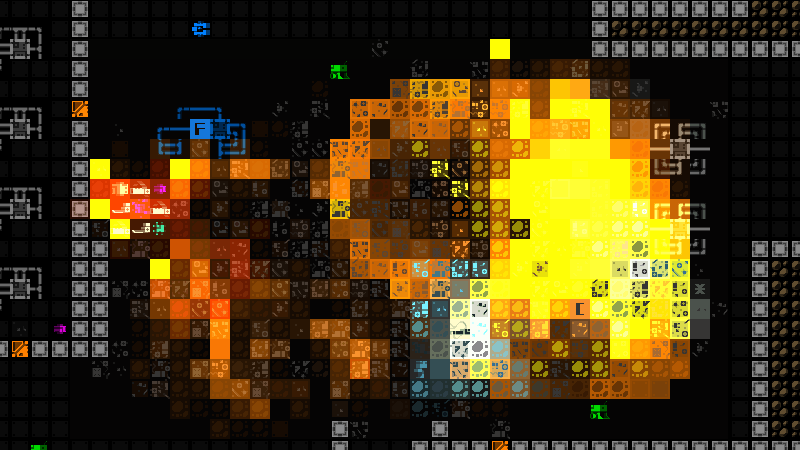 A SITREP?! But it's not Saturday! Feel free to wait until Saturday to read it, but it's here now so let's just all pretend it's Saturday.

Haven't done one of these updates since switching to generally only announcing releases, but it's been a while and there are plenty of people who probably don't check other sources of Cogmind news so they have no idea what's going on... Let's bring everyone up to speed :)

Say Goodbye to 2020
Following our Forbidden Lore ARG from last year, I wrote a post-mortem[www.gridsagegames.com] if you're interested in how that event was designed and panned out.

There's even a complete ARG walkthrough[www.gridsagegames.com] filled with spoilers, though it does offer a good shortcut to just obtaining all the Cogmind lore locked behind puzzles.

Congratulations to those players who managed to solve the entire ARG!

We also have Beta 9 stats[www.gridsagegames.com] summarizing the data submitted throughout that release series, including many new topics such as build types and causes of death as enabled by our expansive new scoresheets. 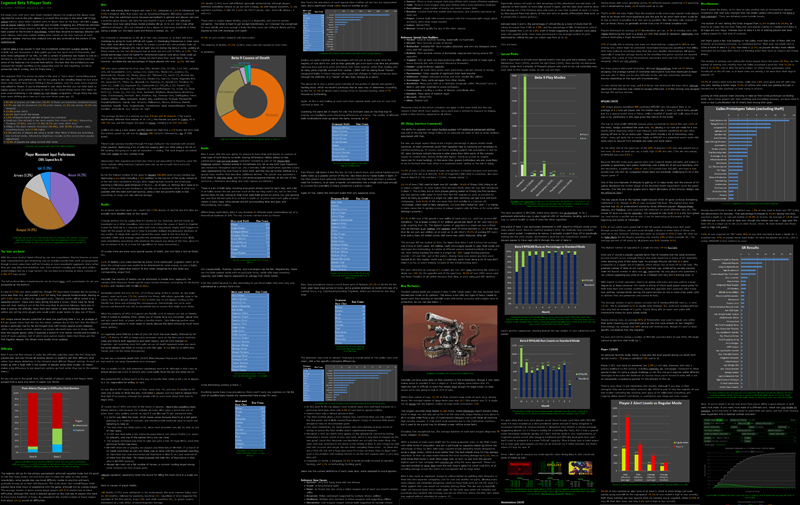 Cogmind 2
Just kidding, of course we're still on Cogmind 1 here, but Beta 11 is indeed shaping up to be the sizeable overhaul we always wanted to get to one day (talked about since like 2015 xD), one that revisits lots of parts and some mechanics with an eye towards tweaking and rebalancing to better integrate them into the whole that Cogmind has become--redesigning some, removing others, as well as introducing new ones to smooth everything out where necessary. Basically we're further improving on the experience in so many areas. And although new content isn't the focus of Beta 11, yeah we're definitely getting some of that, too ;)

This year so far I've been testing out experimental features with patrons, keeping the most successful concepts of the bunch while continuing to stream runs in these builds to explore the effects of changes. For example this latest crazy one looking at new infowar utilities (after having made other changes to existing ones in builds prior to this):

So far we've revisited storage capacity, overweight mechanics, propulsion type balance, and plenty of specific part changes, with plenty more to come. Next up over on the dev blog I'll be covering some of the major changes, beginning with the adjustments to storage and propulsion, followed by a rework of some damage types.

Already though the blog has been covering some of the new stuff coming to Cogmind, including...

...perfect for finding just the right part (patrons voted for this one--lots more details and related features demoed in the article).

A map ruler and other overlays[www.gridsagegames.com]: 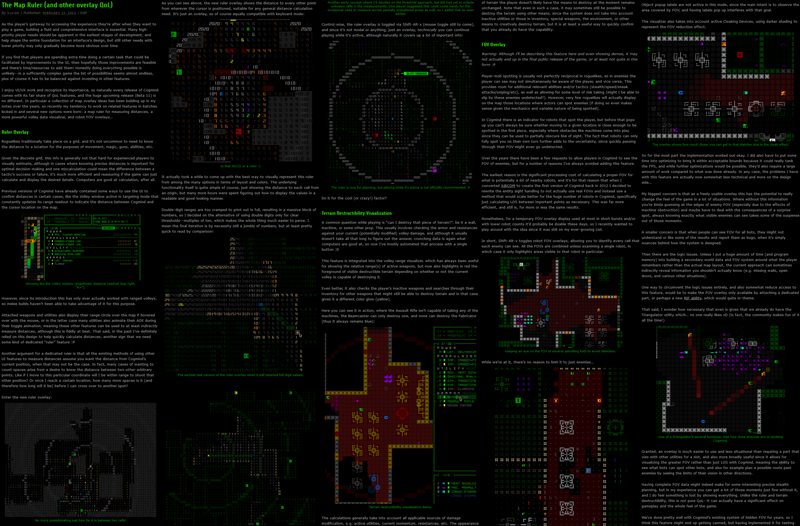 For the min-maxers out there: No more need to count cells or guesstimate the distance between two positions :)

New infowar utilities[www.gridsagegames.com] mentioned with regard to the stream above: 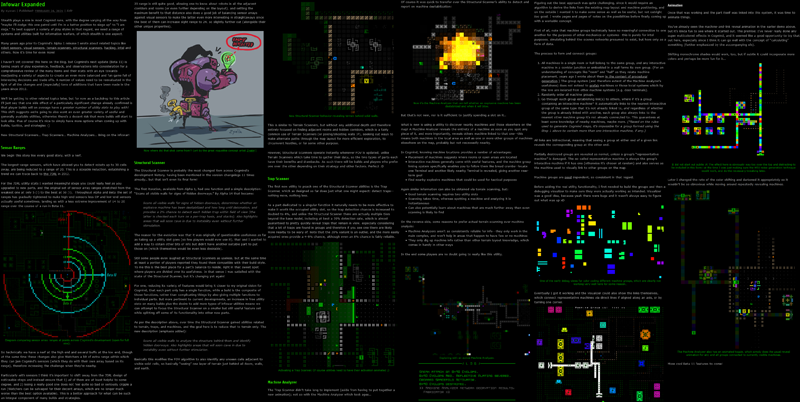 And the almighty Machine Analyzer:

This is just the beginning...

There's no set schedule for Beta 11's release, since it's by far the most sprawling of any update before it, with less concentrated work in one or two major areas and instead lots of modifications and additions across the board, many of which need to all be integrated into the same update for best effect, but it's hard to say how long that will take given the scope.

Recent Events
More recently, I've been a bit sidetracked by doing a bunch of official 7DRL reviewing for this year (related streams now archived on YouTube), raising a little more money for development, and also doing a bunch of forced website updating due to a huge PHP upgrade by the host. Unfortunately the latter has made some parts of the wiki inaccessible for now (in particular info for some parts), but aoemica's Cog-Minder[noemica.github.io] has you covered there :)

Last but not least, you may have noticed we have a little build update for Beta 10.2 available, but there's no changelog for it ;) ;) ;)

Cogmind
89
10
Feedback: Combat is repetitive
I think I've said something similar years ago when I first got the game, but now that I've picked it up again, I think it needs to be restated. Combat is easily the weakest part of this game. Simply put, combat in this game can be broken down into one thing, and that is keep shooting until everyone is dead. There are no consumables or active abilities on cooldown in this game. Every component is either turned on or off, that is the extent of their engagement in combat. Even something like running away fro...
5

GrimG
Apr 13 @ 5:33pm
General Discussions
Enemies Keep Exploding
I just started playing again after a long Hiatus, and I'm finding enemies explode, despite not getting hit with explosives or an EM weapon to the engine? Is this new? I fire a light AR and Small Laser at a grunt, and it's death damages me, its buds, and puts a hole in the wall. I even caused a small 3x3 "blast" that took out the walls when I tread-crushed a civilian bot in a long 1-wide corridor....
8

Combat Strategy Guide: Positioning
Tired of swarmers? Can't hold off large armies? Always missing shots? Keep losing all your equipment? If you answer YES to any of these, this guide is for YOU . Like any strategy game, combat isn't ...
51 ratings 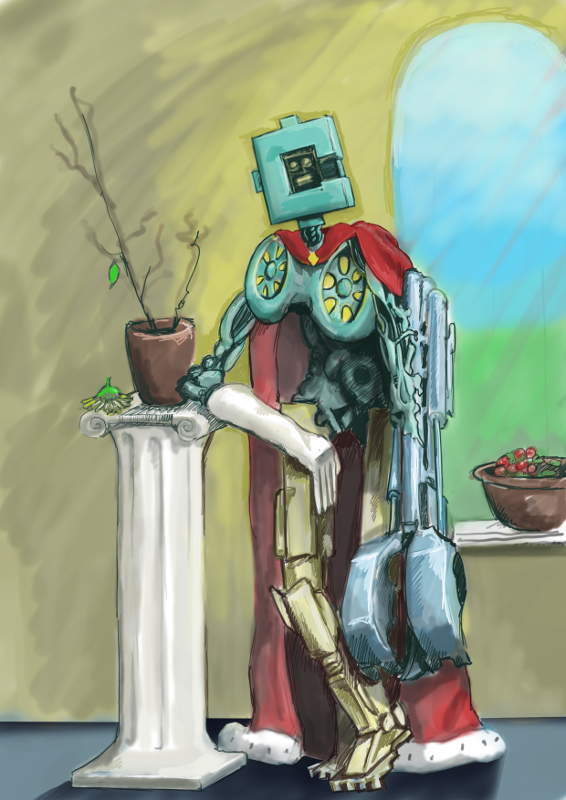 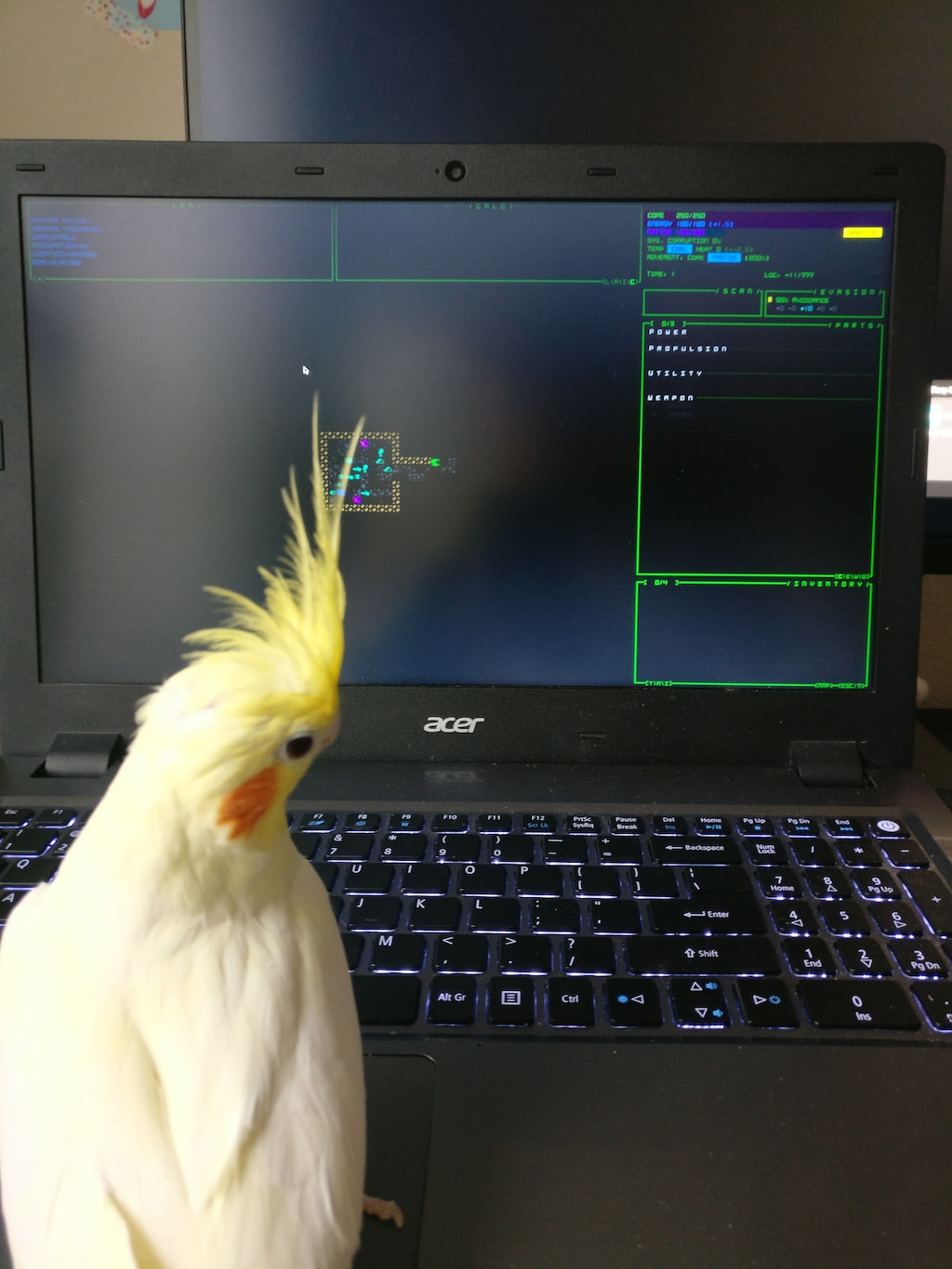 0
13
Trying to get Beni into roguelikes

A quick guide to early game
Designed for new players that do not want an extensive guide just yet. Completely spoiler-free. It's a small enough collection of tips and hints that you can read in a few minutes, but hopefully enough to lead you past the early game.
40 ratings 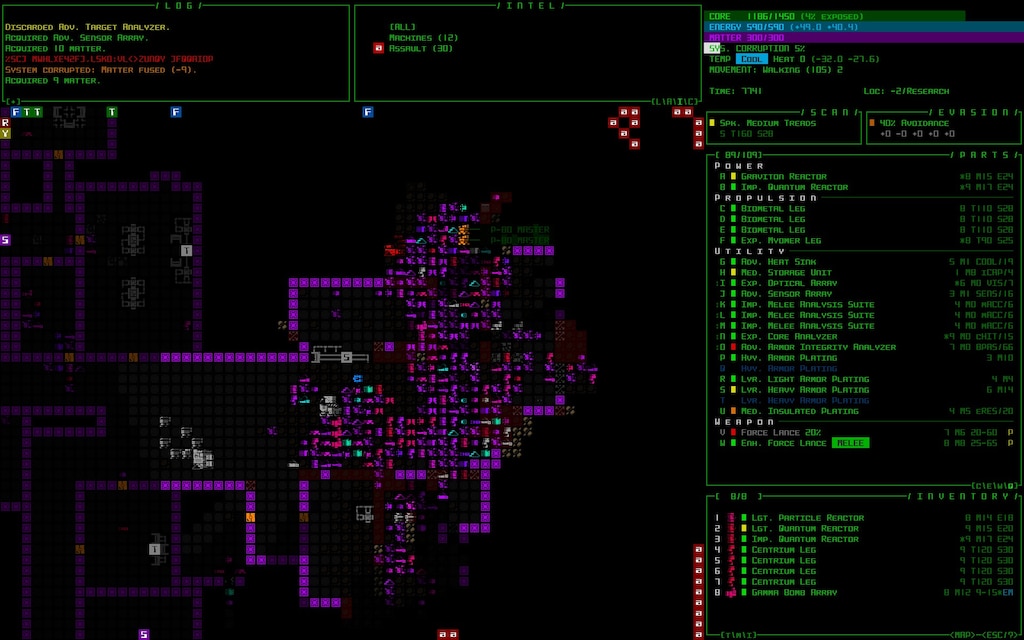 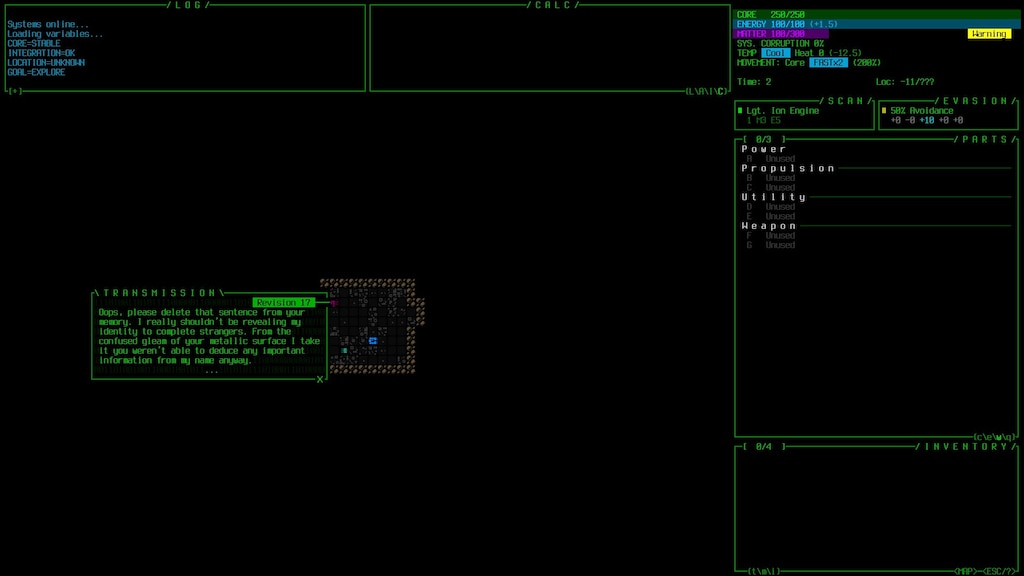 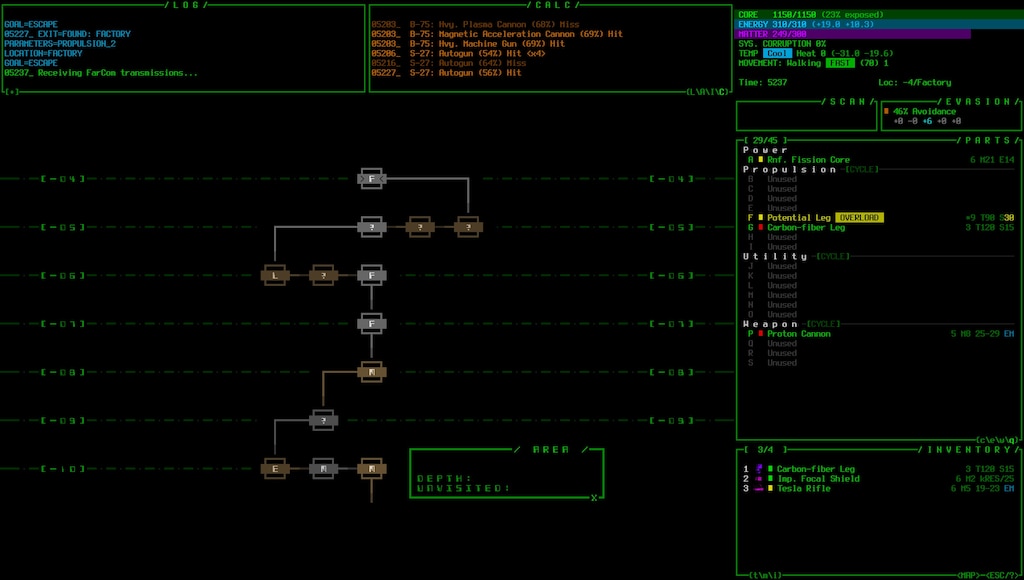 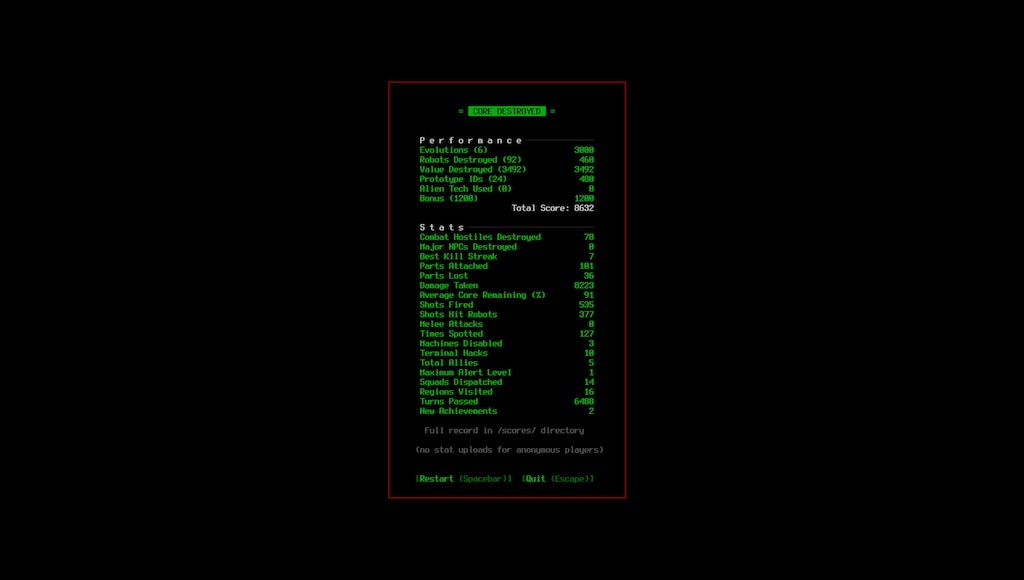 zamo
View screenshots
I'm not enjoying the game, am I missing something?
I've only played an hour, made it about floor 6-7 I think. But I'm not enjoying myself at all. For some background, I've played and beaten Tales of Maj'Eyal, died horribly playing DCSS and Caves of Qud. I enjoy roguelikes immensely. My issues are simple, all progression in the game is random. At first I thought it would be fun, but the randomness paired with the constant decay of modules means even if you do find the playstyle you want, it's only going to be temporary. It's like removing skill trees ...
7

Did you know Cogmind has special modes?
Cogmind has hidden modes not easily accessible in-game. I'll attempt to list all of them. Bold text is typically important . 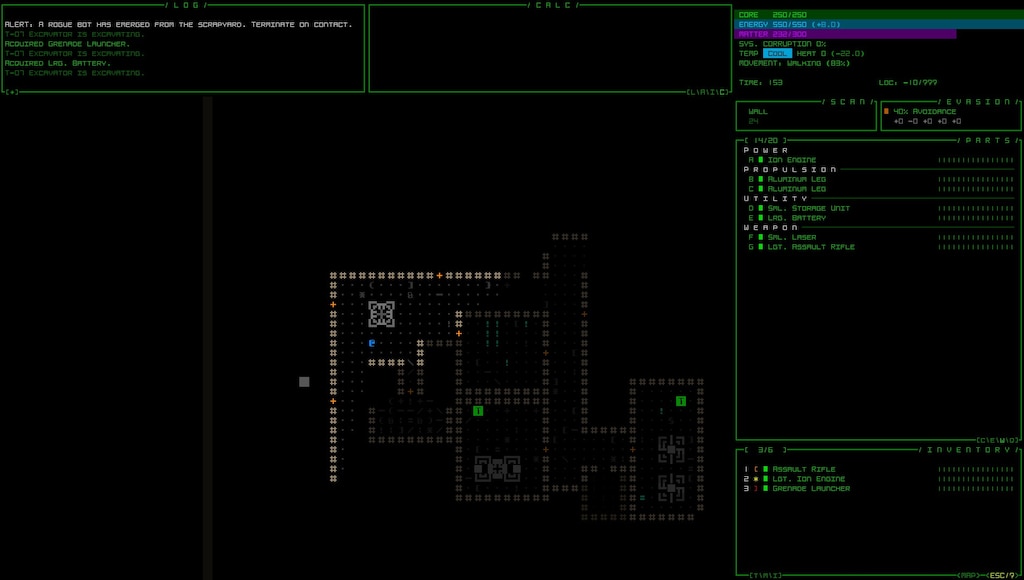 0
1
Trying out the ascii mode

Alignment overview
A basic alignment overview allowing you to learn what different factions do, what are restrictions and why you should choose them. The main goal of this guide is to provide sufficient knowledge to new players and allow experienced players to fresh up their... 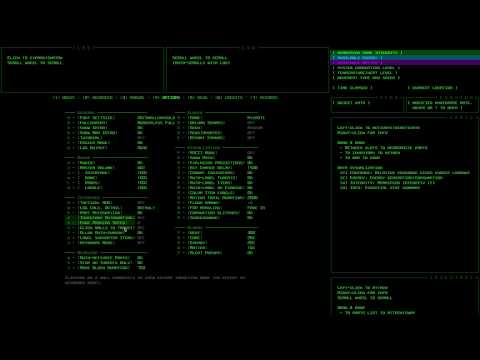 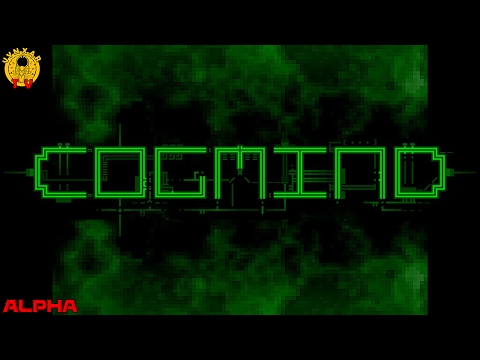 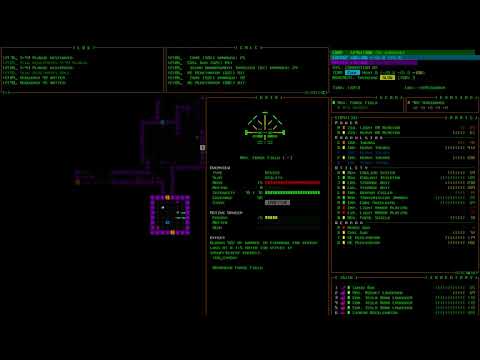 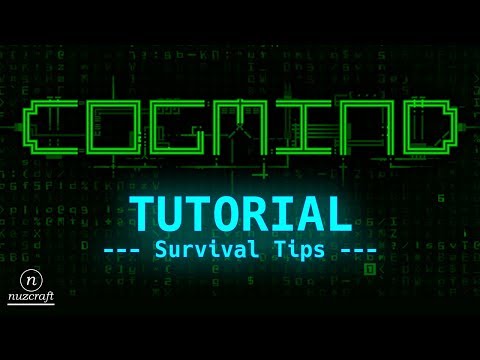 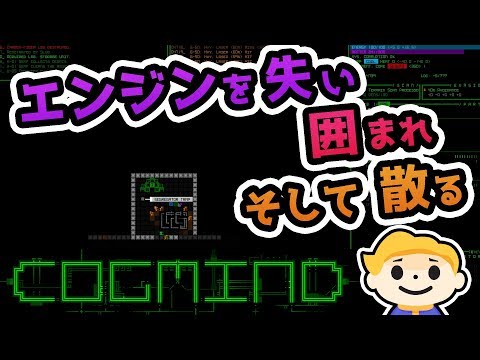 Tama Ch
View videos
Minor bug
If you try to fit a faulty prototype with a friendly Researcher in attendance, the faulty item instead goes to inventory. However it does this even if the inventory limit is surpassed. Seeing as it's a useless item, it's not exactly a big deal, but still....
1

Sleekie
Apr 13 @ 5:16pm
Technical Support
Bugs
1# : Visual bug (components in inventory) dropping them fixed the problem, but i didn't need to drop the last one (ion engine) for it to look normal again. https://steamcommunity.com/sharedfiles/filedetails/?id=2302852093 2# : Sound completely stopped. I was in scrapyard (turn > 400; Non-hostile bots = 0) when it happened. It lasted until i quit (without using the keyboard shortcut). Possibly unrelated, the game crashed at that point (i hadn't turned "crash report" on.). I did not lose any save data. 3# ...
14

Recommended
48.8 hrs on record
Early Access Review
Now COGMIND is a roguelike! Robotic dungeon-crawling with ultra-smooth mechanics and consistent presentation, I had a blast and got sucked in immediately: Exploring, experimenting, hacking, destroying, surviving, learning. Interesting equipment to master and exploit, crisp writing, perfect menus and easy controls, it's well worth it!