Space Station Continuum is a building & management sim inspired by the past, present, and future of humans in space.
$14.99
Visit the Store Page
Early Access Game
Get instant access and start playing; get involved with this game as it develops. Learn more.
Most popular community and official content for the past week.  (?)
Career Mode Sneak Peek: UI Evolution
Oct 15
Greetings, Commanders!

Today I'd like to talk about one of the many things we're working on as part of the upcoming Career Mode update: UI Evolution.

Space Station Continuum takes place across a wide range of time periods. From the latter days of the Apollo program to the near future of commercial spaceflight.

As you progress through these different time periods many things will change. You'll unlock new spacecraft, new technologies, and new design styles for your station modules and everything within them.

But these changes won't be limited to just the objects that your Astronauts interact with. Why shouldn't the technology that you use change as well?

Each time you progress from one era of spaceflight to the next, Space Station Continuum's user interface will update to reflect the design styles and computer display technologies of the time. Slide rules, oscilloscopes, and LCDs are all things you can expect to see if you spend enough time in Career Mode.

There's a lot of design work going into creating the right style for each era, and today I want to share with you an early example of some Apollo era UI elements that are going into the first iteration of Career Mode. 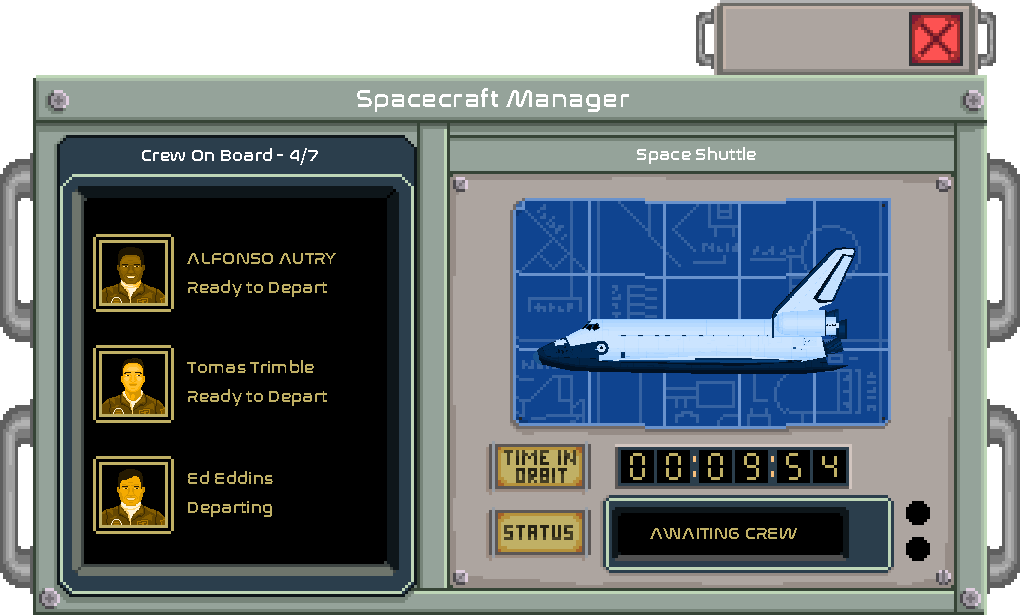 What's a Space Shuttle doing in the Apollo era?? Oh, you must be in sandbox mode...


The various elements of the Apollo era UI are heavily inspired by NASA control rooms of the time. 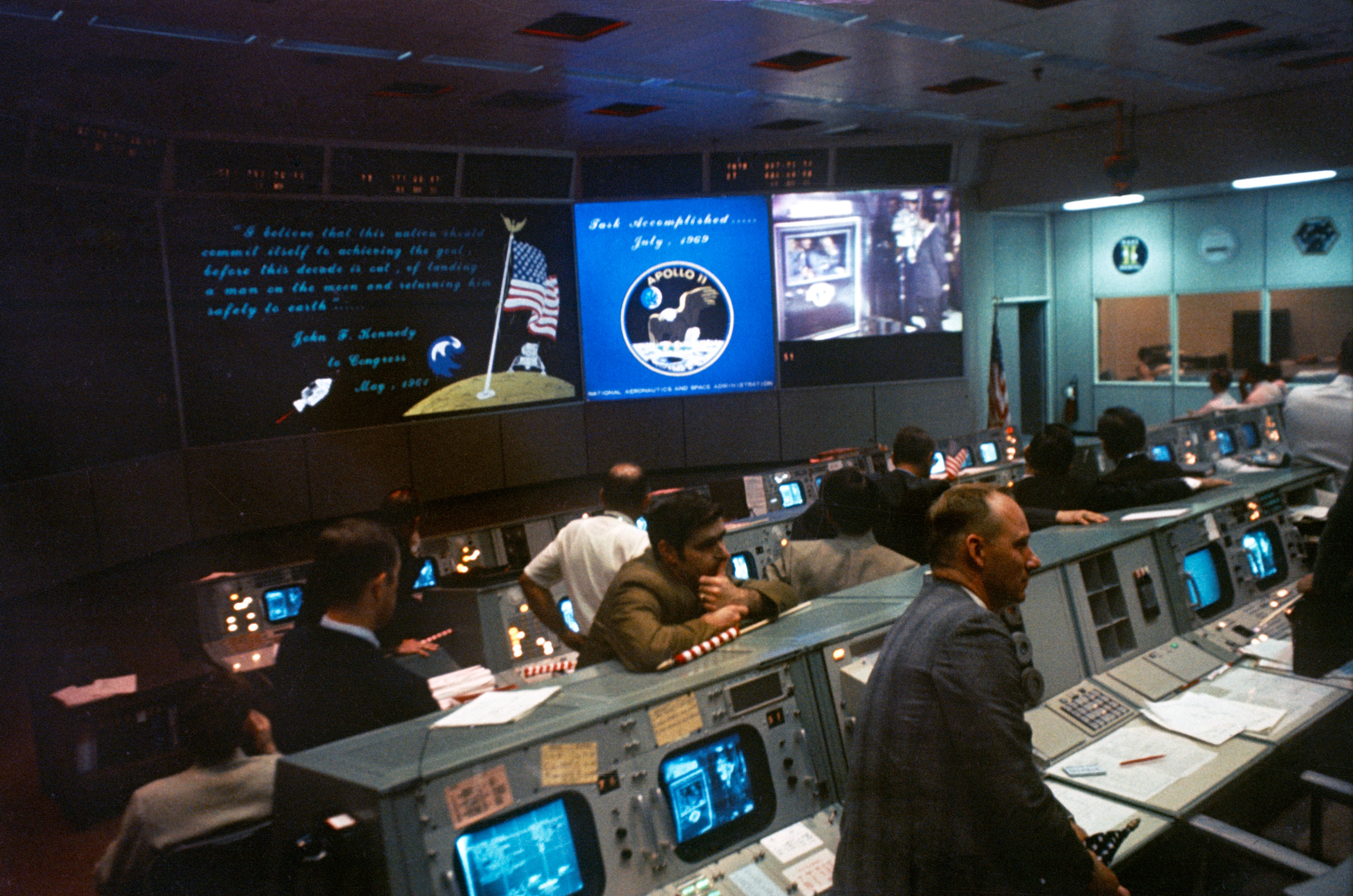 We're working hard to create an accurate representation of historical design styles while making a usable UI that fits with the art style of the game. I'm very pleased with how the results are turning out so far.

What do you think? Are there any old, new, or futuristic designs and technologies you'd like to see incorporated into the UI of a particular time period?

Space Station Continuum
23
3
BUG REPORT THREAD - PLEASE READ!
Thank you for participating in the Early Access process for Space Station Continuum. Your feedback and bug reports will be crucial to making Space Station Continuum the best game it can possibly be! If you've encountered a bug while playing, please post a description of it in this thread while providing the following details: 1. Which version number are you playing? You'll see this displayed in the bottom right corner of the screen. 2. A sceenshot of the bug in action (if possible). ...
46 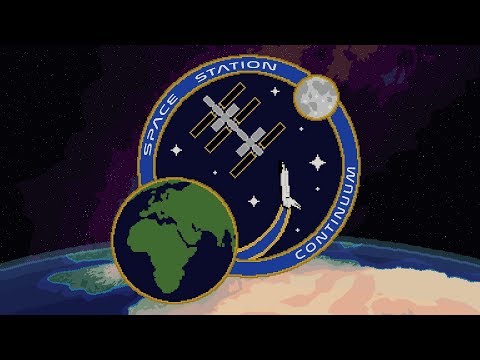 How To: a Space Station
A how-to guide on your first stable space station! 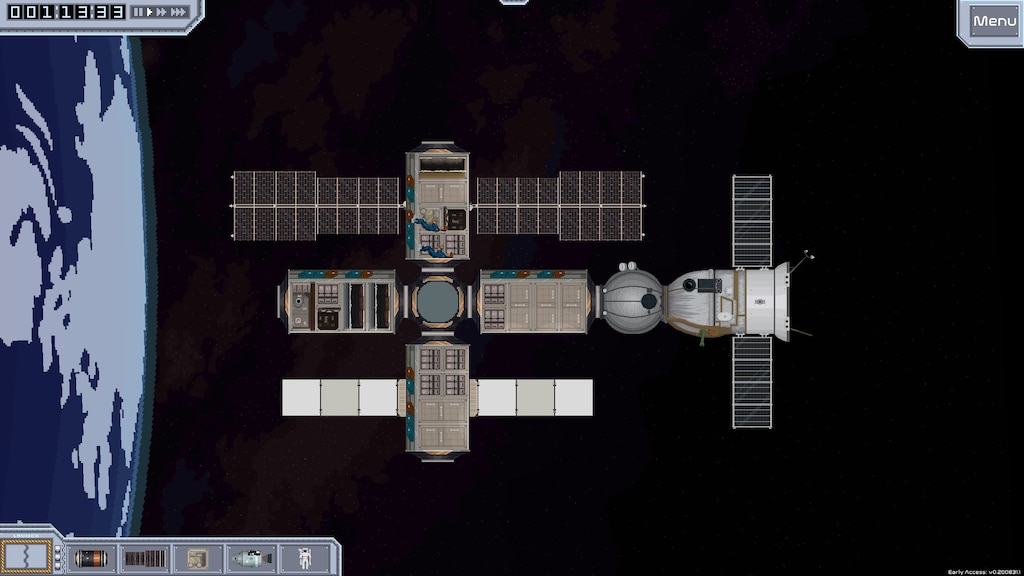 0
1
What do you all think of my space station 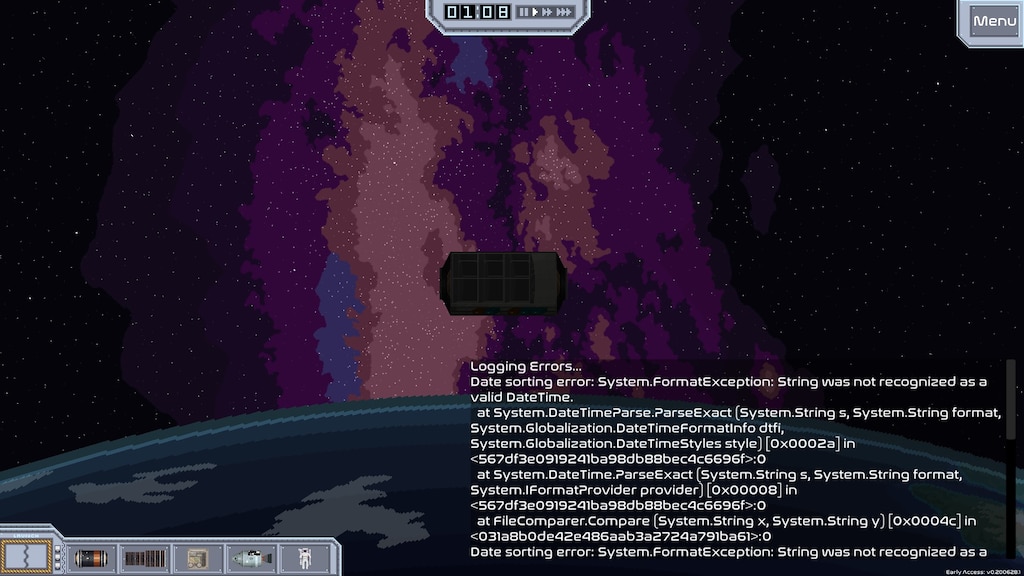 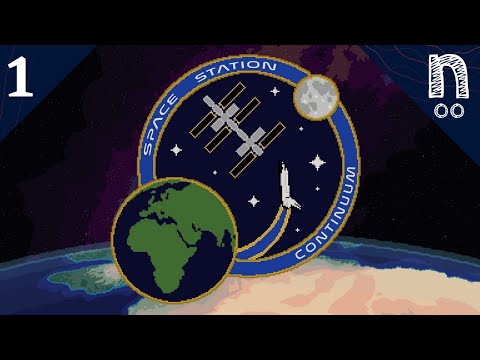 Since then it's been played by hundreds and hundreds of people, and continues to build a strong community on Discord[discord.gg].

If you've already bought a copy of Space Station Continuum while it's in Early Access, then I want to say thank you so much for joining us in creating this game. Your support is making a huge difference to the development of Space Station Continuum, and is allowing us to create a lot more music and art to realise its original vision. More on both of these coming soon.

Since launch, there have been eight updates released here on Steam. Each bringing a variety of new features, improvements, and bug fixes. Many of which have come directly from your feedback in the Steam Community Forum or on Discord[discord.gg].

At this point in development we're changing things up a little. Rather than small, incremental updates every week or two, we're now working on a large new update that will bring a whole collection of new features together. The most important of these features is Career Mode. 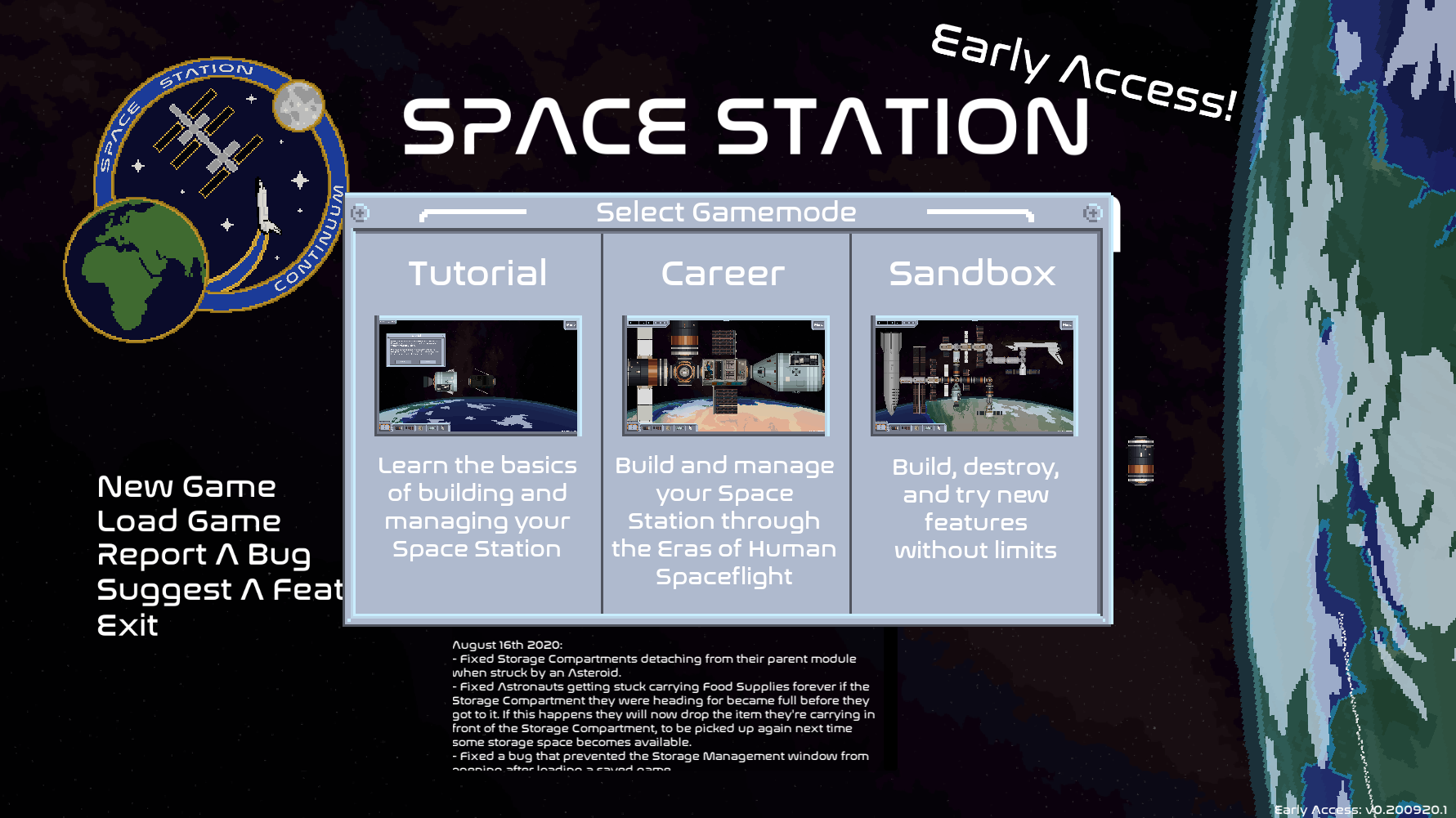 Career Mode is where the core gameplay of Space Station Continuum will start to come together. You'll begin building your Space Station from a single Module, and evolve it over time into a spawling in-orbit research and manufacturing facility.

When the first version of Career Mode launches, you'll be able to earn money and research points to expand your station and unlock new modules and equipment. You'll need to keep your Astronauts happy and healthy, while balancing power generation, energy storage, and heat dissipation onboard your Station. The Career Mode update will include many UI improvements to help you make this possible.

Post-launch updates will add more and more equipment and progression milestones, until eventually you're able to manage your Space Station all the way through the past, present, and future of human spaceflight.

This is a much larger update than anything we've released so far, and will take longer to create than a normal release. Watch this space for regular updates, screenshots, and other sneak peeks on progress. And don't forget to join the community on Discord[discord.gg] for behind the scenes discussions.

I'm very excited about this next update and I can't wait to share more with all of you over the coming weeks!

NBodySolutions
Jul 19 @ 1:57pm
General Discussions
Bugs
So a few bugs or quirks that I've found so far: Turning Manifest on in sandbox doesn't allow you to do anything with your first module. When astronauts get all of their stats red they then leave with whatever vehicle is attached to the station and end up in space just drifting by the station. Not sure if any of these are bugs or not but here's to hoping it's looked into. ...
12

Randy⁧⁧Lahey
Jun 24 @ 12:53pm
General Discussions
v0.200831.1 Release Notes: Notifications
Aug 31
There's a lot going in under the hood in Space Station Continuum. Sometimes it can be difficult to know what exactly one of your Astronauts is doing, or why a system or a piece of equipment is behaving in a certain way.

v0.200831.1 begins the process of surfacing more information about the underlying simulation by introducing the Notifications Panel. 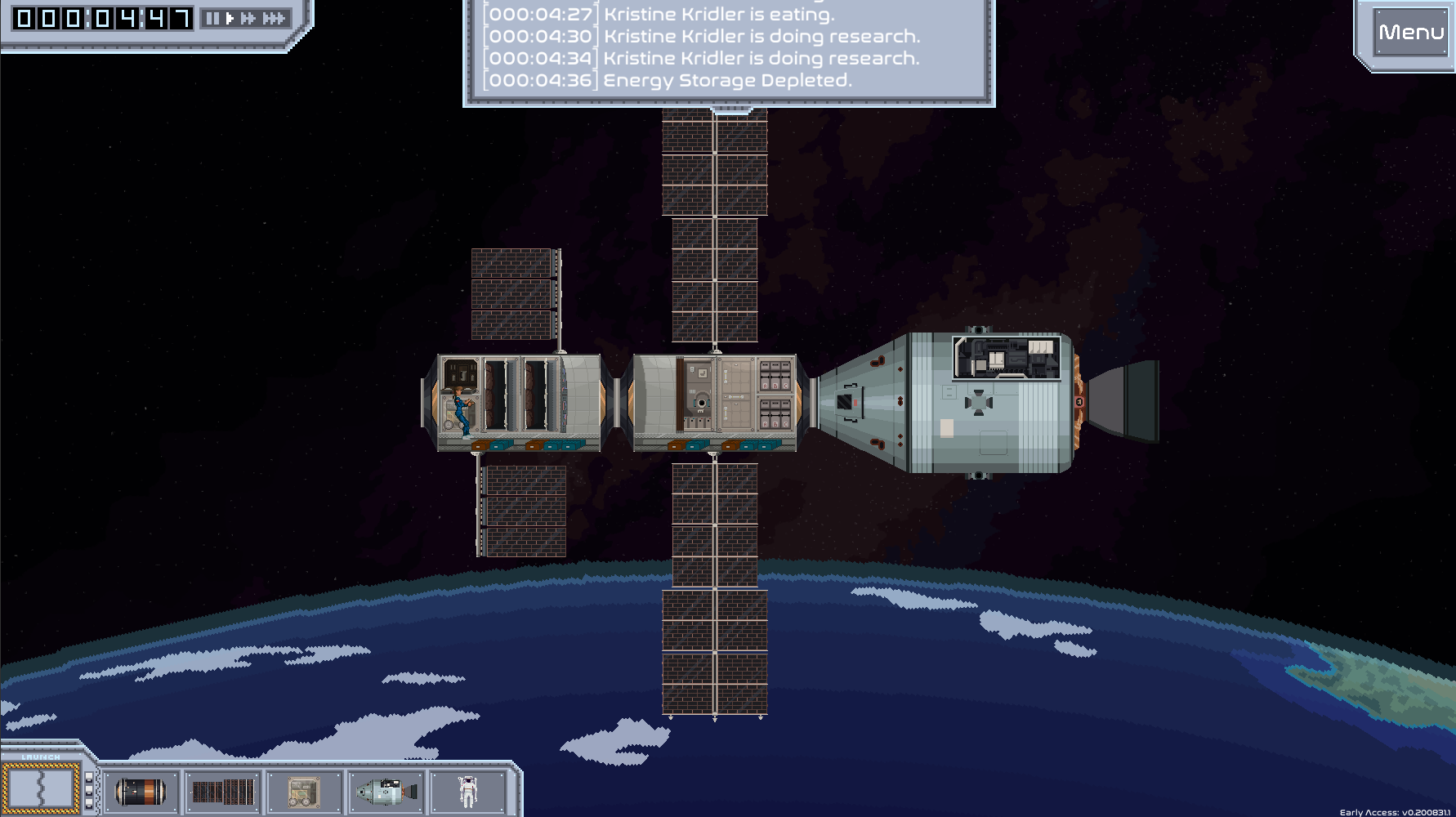 The Notifications Panel can be shown/hidden at any time by clicking on the tab at the bottom of the panel.

Important events such as Astronaut activities, supply shortages, or energy storage depletion will be highlighted here with a timestamped notification.

More and more notifications will be added in future updates to expose further information about your Station.

You'll also notice that the time display and control panel have received a bit of a makeover - adding a day readout to the display and moving the panel to the top-left corner to make room for the Notifications Panel.

As always, if you notice anything unusual with this update please report it in the Bug Report Thread.

And don't forget to join us in the Space Station Continuum Discord Server[discord.gg] for discussions about the game and all things space!

Darth
Jun 24 @ 2:48pm
General Discussions
Suggestions
- Multiple Module Sizes (currently we only have 4x2 modules. It would be cool if we could also build 2x2, 3x2 modules for smaller additions, and 5x3 and 6x2 modules. - Different starting modules (it would be cool to be able to choose any module as the starting point in sandbox - More interior equipment for example: navigation control, life support system, fitness gadgets, different types of laboratories -> astronomy, chemical, physical, biological research stations. - failures and repairs, astronauts ha...
2 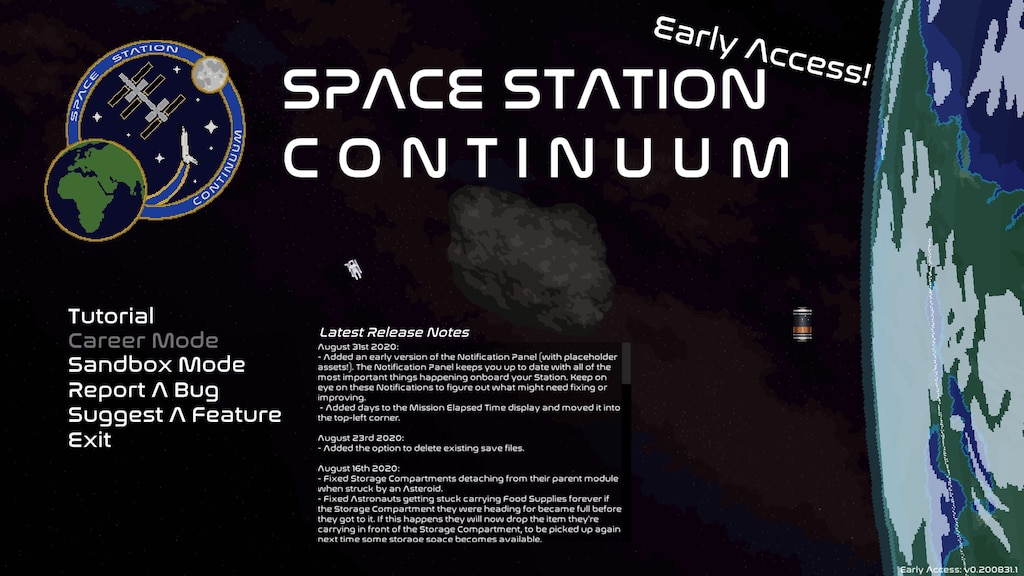 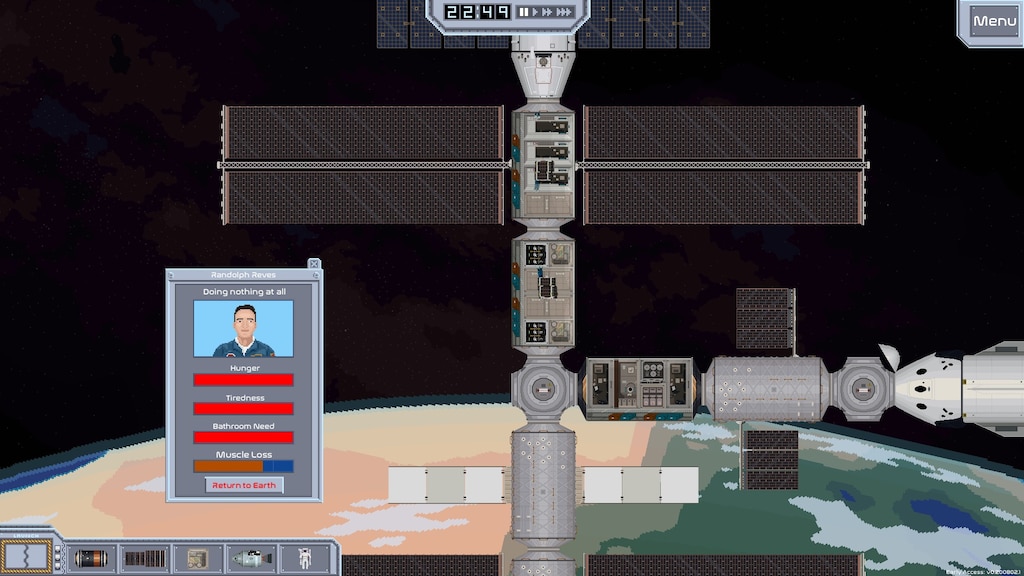 0
0
Houston, we have a problem