Enter the Aperture Science Enrichment Center and experience Bridge Constructor Portal – the unique merging of the classic Portal™ and Bridge Constructor™ games.
$9.99
Visit the Store Page
Most popular community and official content for the past week.  (?)
Portal direction
When I right click on a portal I'm placing (in Portal Proficiency) the options are Delete and Flip, but the option to Flip is grayed out. Or at least, I don't know how to select it. Is it something that's unlocked in later levels? I'm on level 3.
2

milojohn5
Sep 3 @ 7:15pm
General Discussions
how do you make all the carts drive?
when i pick drive only one goes...
7

Flat Earth Denier
View artwork
Save game deleted
Haven't played since April 5, 2020. Opened up the game and everything had reset. Anyone know how to restore the save game file?
3 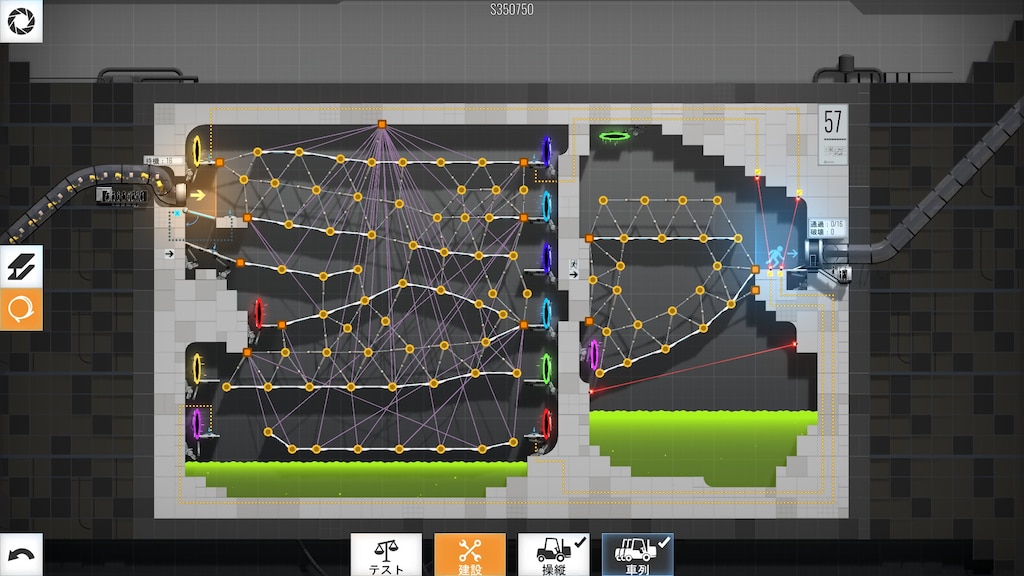 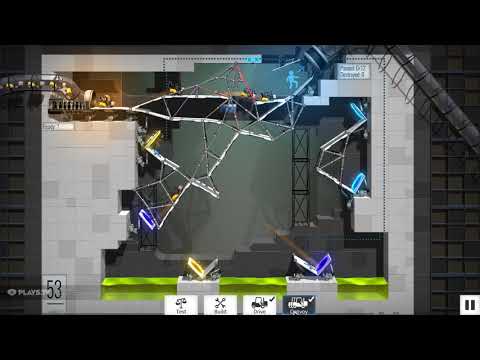 Solutions to all levels
Stuck on a level in Bridge Constructor Portal? See how I did it! Now updated with Portal Proficiency DLC!
101 ratings 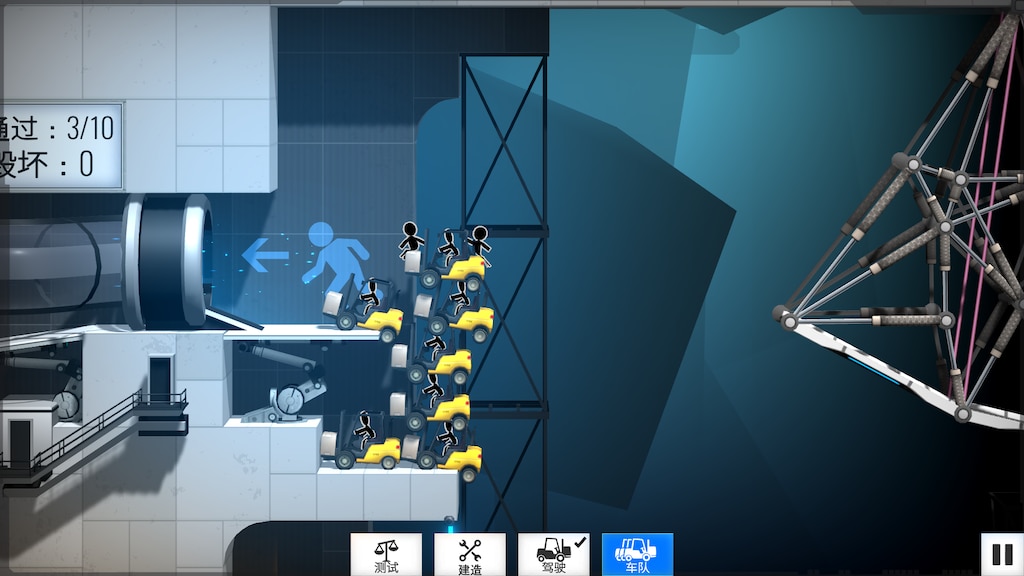 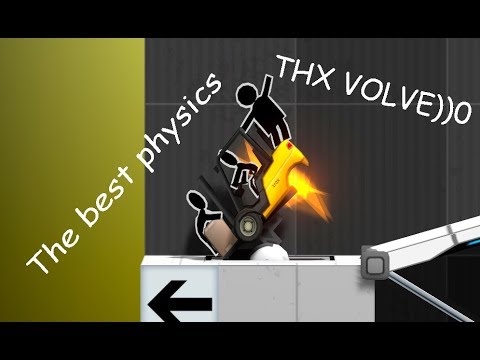 Trackmani?
View videos
How do you quit this game?
I don't see a quit button.
6 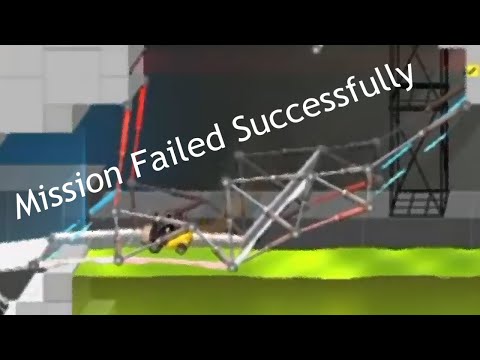 Bridge Constructor Portal is a puzzle game inspired by the famous Portal franchise. Though using the character, background, humor, art style as well as some mechanics (e.g., portal, turret etc.) from Portal, it is a standalone title with only a loose connection and completely different gameplay. The game is one of those easy-to-learn-hard-to-master titles because the challenging gameplay requires imagination, planning, logical thinking (which part builds first and which later), understanding of real-world physics (the game will teach you), creativity and lots of patience.

Most of the time, the game is fun to me, but the experience may vary for different persons. As you progress through the game, it will become much harder. Lots of time will be spent on adjusting bridge structures and since the gameplay is not as thrilling as shooting bad guys, it can be a bit dull. Nevertheless, the sense of achievement after solving one level is immense.

The game has its downsides when it comes to tiny details. They are nothing major but are likely to bring up the difficulty in an unfair way, and I feel like the developer didn’t pay much attention to details.

The “input-output” algorithm is very sensitive, meaning a very tiny adjustment, like revising the angle upwards for one single unit, can cause drastically different results, which makes adjustment take so much time. Additionally, the game doesn’t have guidelines, so the testing-adjusting process is quite a hassle.

Quality control is a bit sloppy in some tiny places. Such as, edges and switches can sometimes go through bridge surface and sometimes can’t; I encountered flat surfaces that can make passing cars jump up for no reason; it is quite common that two supporting points have very awkward distance, like a distance of 2.0001 beams, feeling like a result of careless calculation and numerical design.

The game has an untold, hidden mechanic that a beam with and without surface has differences in toughness. I don’t think it is a reasonable design because there is no trade-off such as cost and weight increase. Also, you can’t revoke anything you undo, but it is actually a very needed function in the testing process.

As sort of a mini-game, Bridge Constructor Portal outdoes itself with good amount levels with high-quality level design (60 in base game, 30 in DLC and numerous from Workshop creators). I really like a few optional mechanics where you can challenge yourself. Such as, building the bridge at as low cost as possible; ensuring the vehicles pass without any passengers fell off; testing the structure with the whole fleet (you beat the level as long as one test vehicle passes through). On top of that, you can (should) try to build the bridge with aesthetic and simple structures. It is a game with quite some depth and is suitable for puzzle lovers, kids and self-challengers. 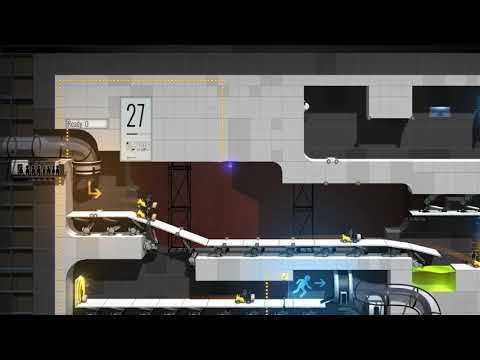 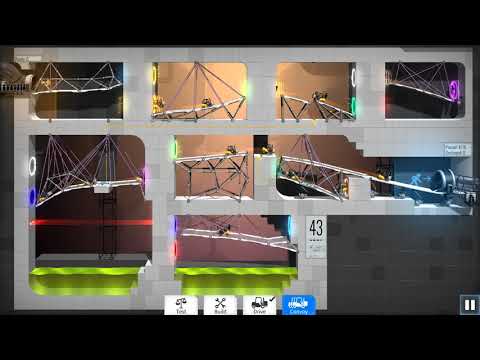 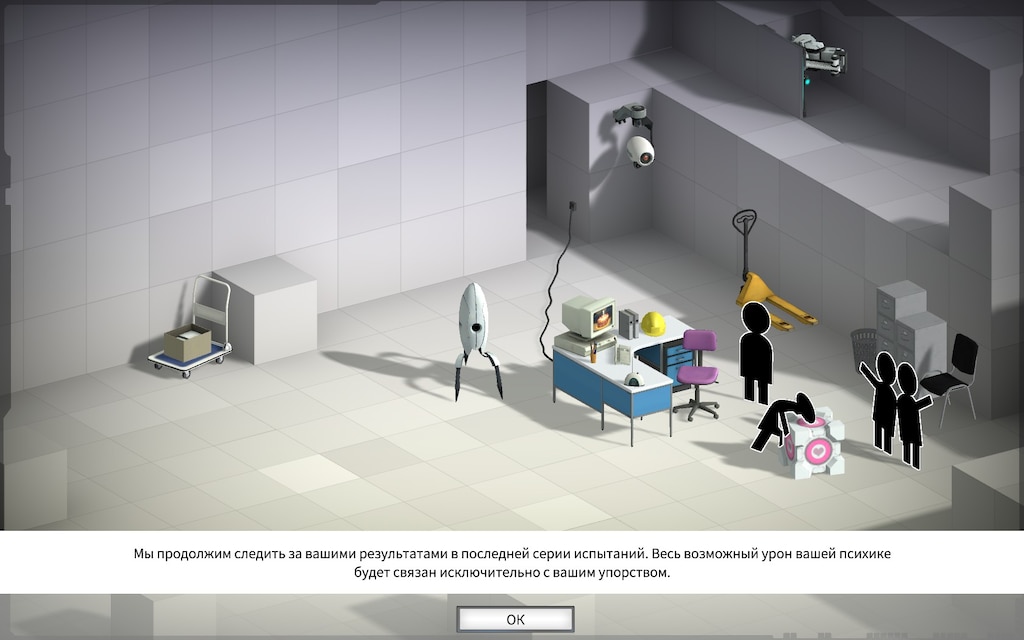 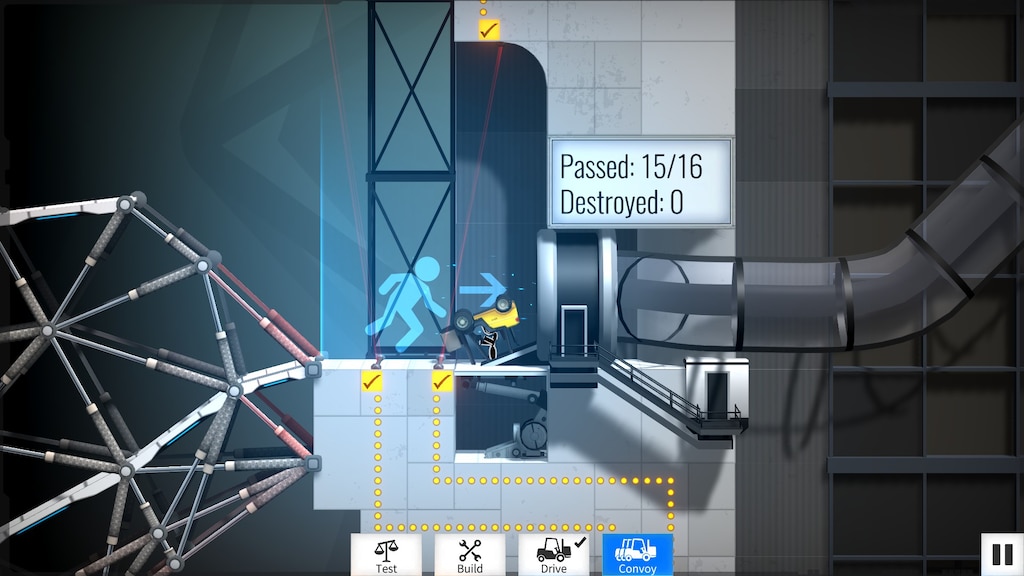 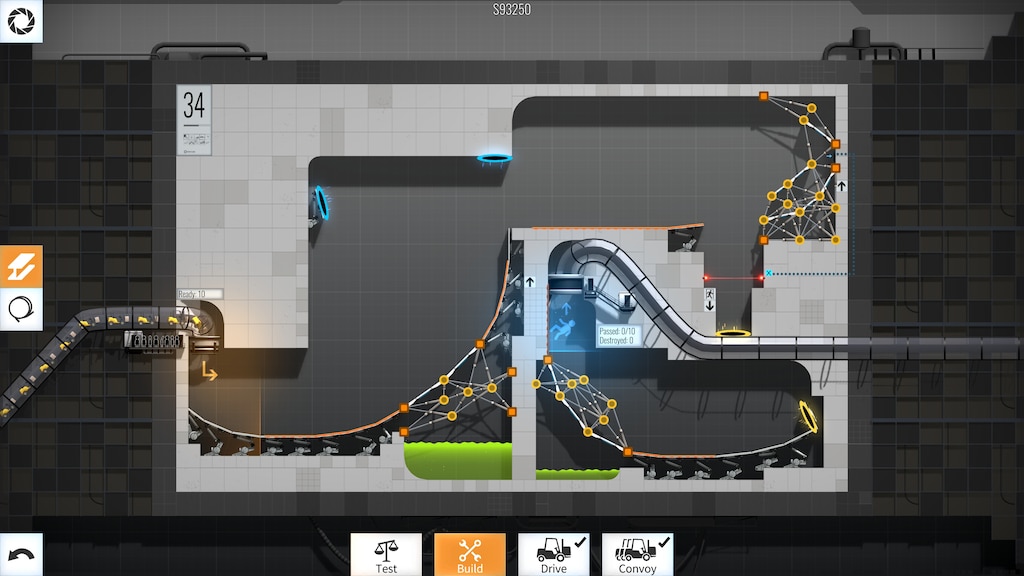 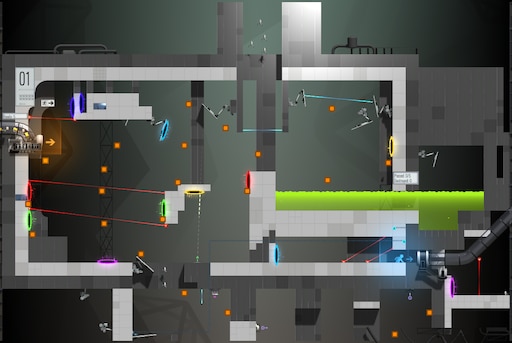 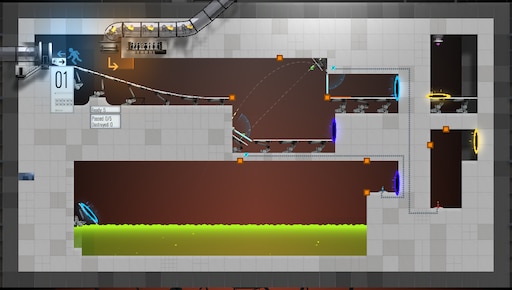 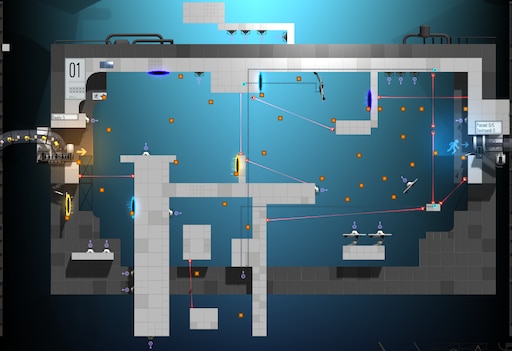 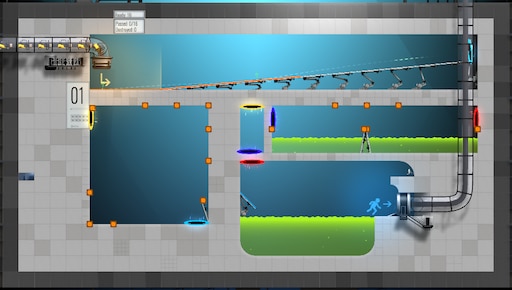 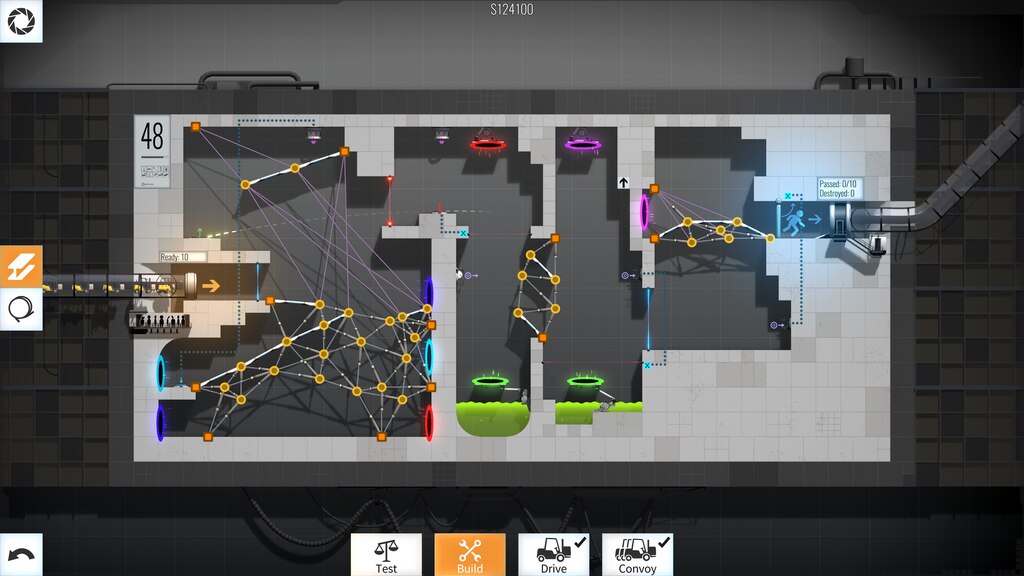 maulwafer
View screenshots
Achievements not working?
I played a bit and unlocked some achievements, or at least it popped up on the corner of my screen. But in the game's page it says i have 0 achievements unlocked and it's on 0%.
2

IRI_john
Aug 22 @ 3:37pm
General Discussions
No one has rated this review as helpful yet

Recommended
22.9 hrs on record
I can really recommend this game to anyone who is up for a physics-puzzle game.
Apart from being a great game in and of itself, Bridge Constructor Portal has great humor, a really good DLC and Workshop-Support, so you may never run out of levels

Recommended
41.5 hrs on record
First of all I want to say, there are games like this of course, so it is not a unique concept, however I do think the inclusion of Portal's mechanics, really adds new dimension (pun intended) to the typical bridge builder type games. I feel like everyone can agree that the portal universe in itself is interesting, so having an extension of that, whether canon or not is welcomed.

In terms of how it felt to play, for the most part I felt like the difficulty curve was mixed, it was nice enough that each new chamber required more thought, energy and time to figure out, as it reached the end of the game. Although having said that I do think because of the nature of the game taking place in the same setting and only subtly changing via adding different testing elements, it was incredibly samey, so having it drag out, was quite grating, that and I found often the chambers I got stuck on were ones where the solution required a precise placement of platforms and supports, which is fine, but definitely frustrating when you constantly need to shift things around, hoping it eventually works out, which isn't so much an issue with one forklift, but multiple? Definitely requires a lot of thought, specifically when properly supporting structures.

I felt like most of the game was achievable, but there was like 2-3 chambers where I needed the help of a guide, if you're wondering why, basically the solution required precise placement of ramps and I had spent so much time constantly shifting them around, so I just wanted to move on, so I am disappointed I needed to, but I really felt like I wouldn't of got it otherwise sadly.

Despite my grievances I did enjoy the game, the height of my enjoyment was when I was nailing the solution, any time the game slowed down though, I did enjoy it significantly less and the thing is with a game like this, it's incredibly hard to balance, because each person will approach the problems differently, plus the intended solution, may not be the one the player comes up with. I definitely know a lot of my solutions were probably quite different from what the game wanted, but hey they worked, but I think that's an advantage, giving the player options on how to complete a task, rather than holding their hand.

So yeah not a flawless game, but definitely something that will get you thinking and getting creative to find solutions to problems.