Have you ever thought about expanding your own crime empire, without the legal and moral consequences? SIMULATE IT! Now you will finally be able to crawl into the dark alleys of the drug dealing business! Become a street business mastermind, or a ruthless gangster - it's up to you!
$19.99
Visit the Store Page
Most popular community and official content for the past week.  (?)
Video Update with Drug Dealer Simulator Lead Dev!
Jul 30 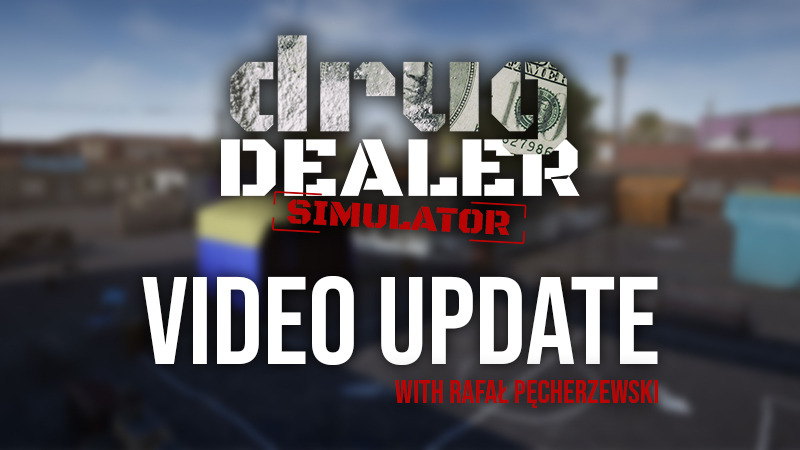 We’re presenting you the brand new devlog! Developer of Drug Dealer Simulator, Rafał Pęcherzewski, will talk about his work on the game so far and about plans for the upcoming updates. You can watch it here:

Drug Dealer Simulator
618
169
Should i give la balena mixes?
i use The Li'l Blue Coke from the guide but i dont know if i need to give balena non mixed default coke, what do you guys do?
16

VladGTM22
Aug 14 @ 8:24am
General Discussions
Is my game bugged?
Im lvl 26 and i literally only have one mission which is "work your way up to one of the local gangs" and literally all im doing is pressing T in my house until La Ballena orders coke, then i deliver and repeat and it takes so ♥♥♥♥ing long to get up to lvl 1 in the gang thing...
2

xd
6 hours ago
General Discussions
Game is Dead
1.) Only 1 content patch since release, with a few bug fixes. 2.) 2 months waiting for 2nd patch resulted in zero content, or bug fixes. All that we got was Portuguese language translator for Portuguese folks... 3.) Zero post, or replies from any of the Devs in over 2 months. I checked their post history. Dead game; money grab; don't buy....
10 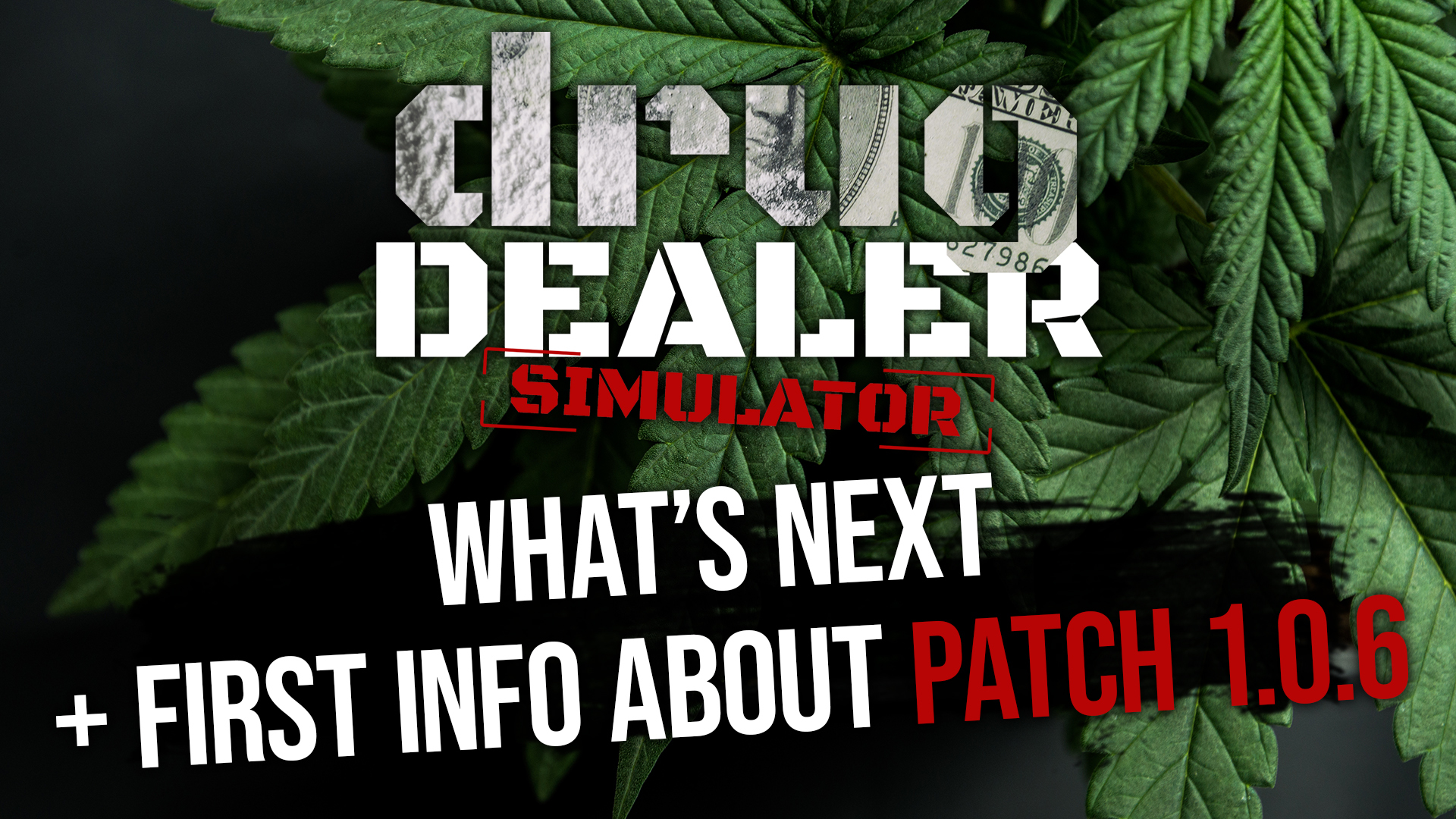 For some time we've gone a bit dark (me especially). Shortly after the premiere we had a very busy time of intense work and changes in the studio. We had a lot of investments to make, including renovating our studio, getting new hardware and software as well as recruiting new people. It took enormous amounts of time and attention, including traveling, meetings and sorting dozens of things out. All for improvement of the studio and the future of both Byterunners as whole as well as Drug Dealer Simulator.

The important part is - we are currently 100% back in business and back to the old work paste! First of all - THE GAME HAS NOT BEEN ABANDONED.

Some content and improvement were being worked on during that period by part of the staff, but we were not able to fully finish them up and bring them to the game.
We know about the many voices of frustration about the game getting much less attention in the last few months and updates and we fully understand the reasons - but I'm happy to announce that time is finally over!

This week we will publish a more detailed Video DevLog, where I will be speaking about upcoming changes in the closest patch as well as in the soon future. Tons of things are coming. Just to give you a glimpse, we are currently working hard on delivering a first part of big changes in Patch 1.0.6 including:

More details on 1.0.6 as well as info on further large patches and more will be in the DevLog. Stay Tuned dealers. Greatly appreciate your support and patience. This is all possible thanks to you! I'm attaching a few WIP shots of the map remastering, hope you like it! 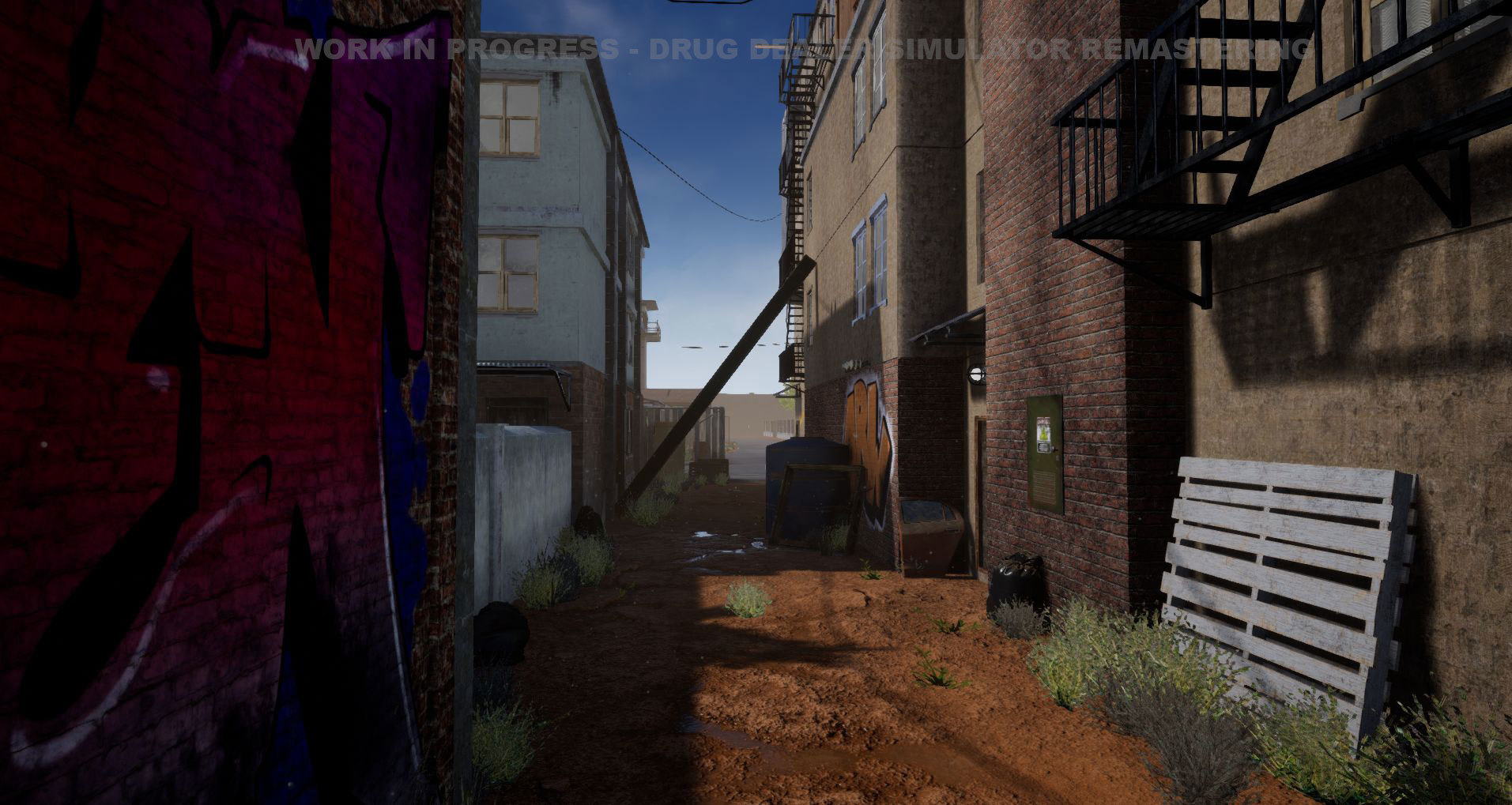 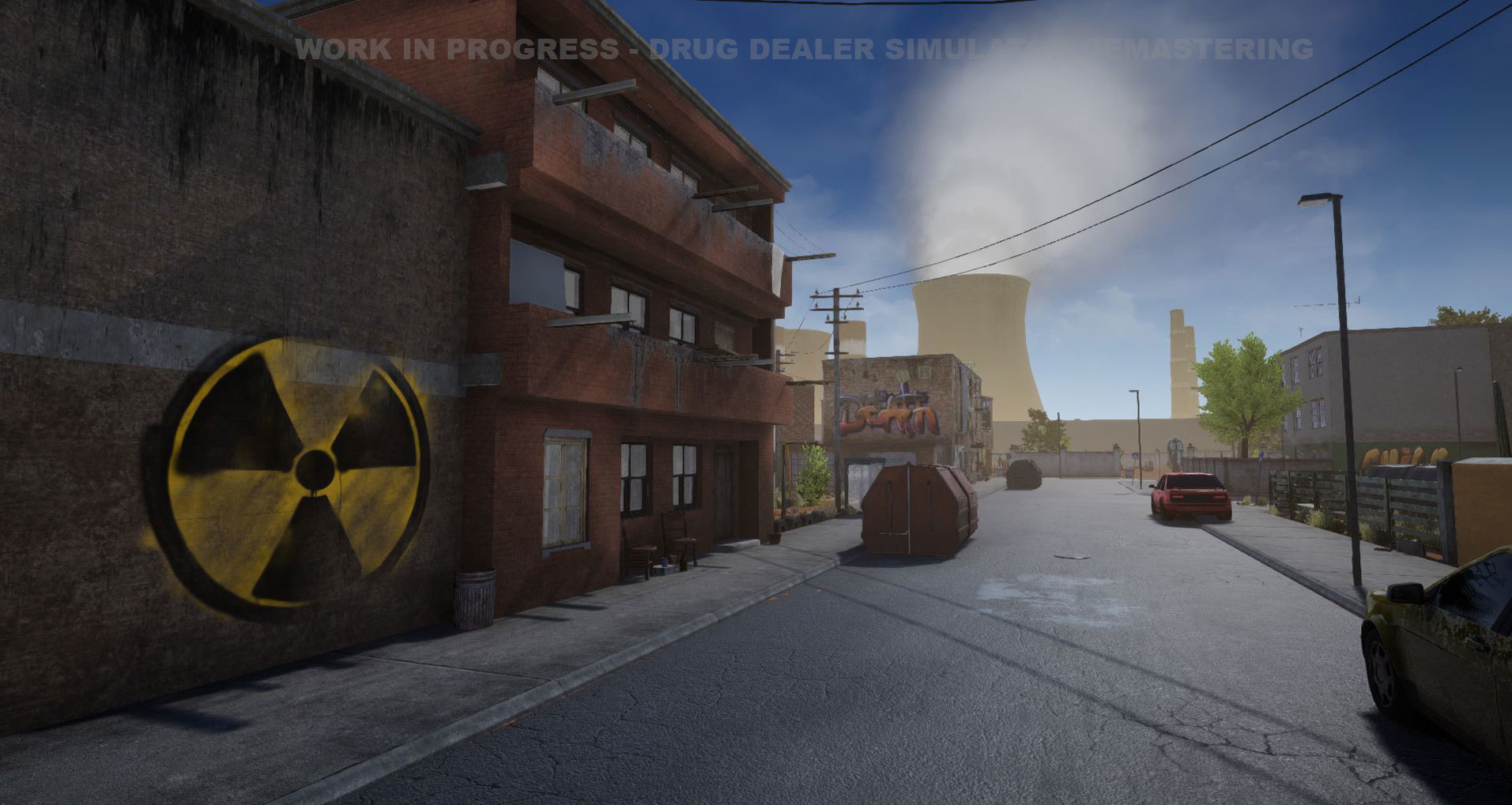 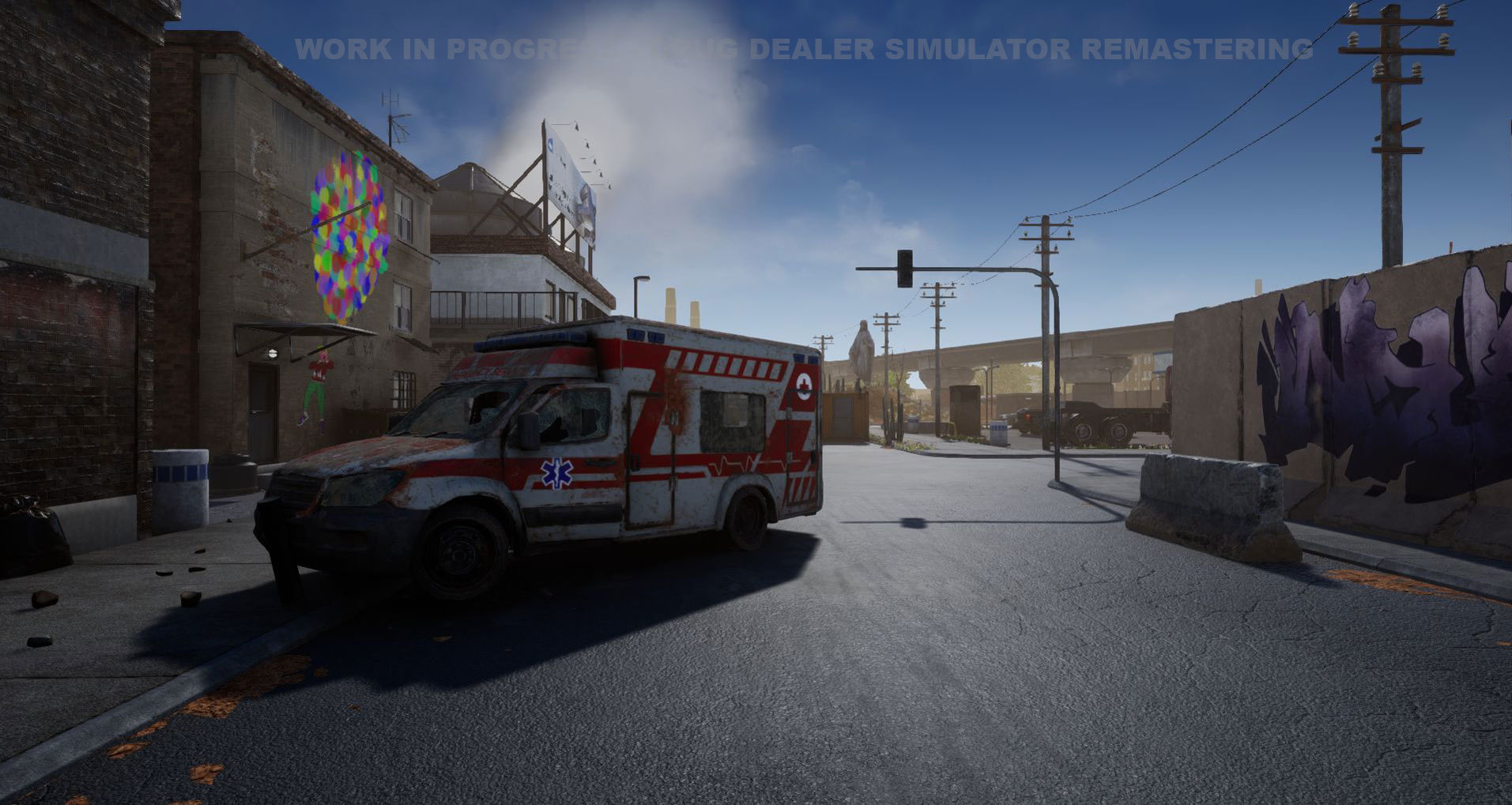 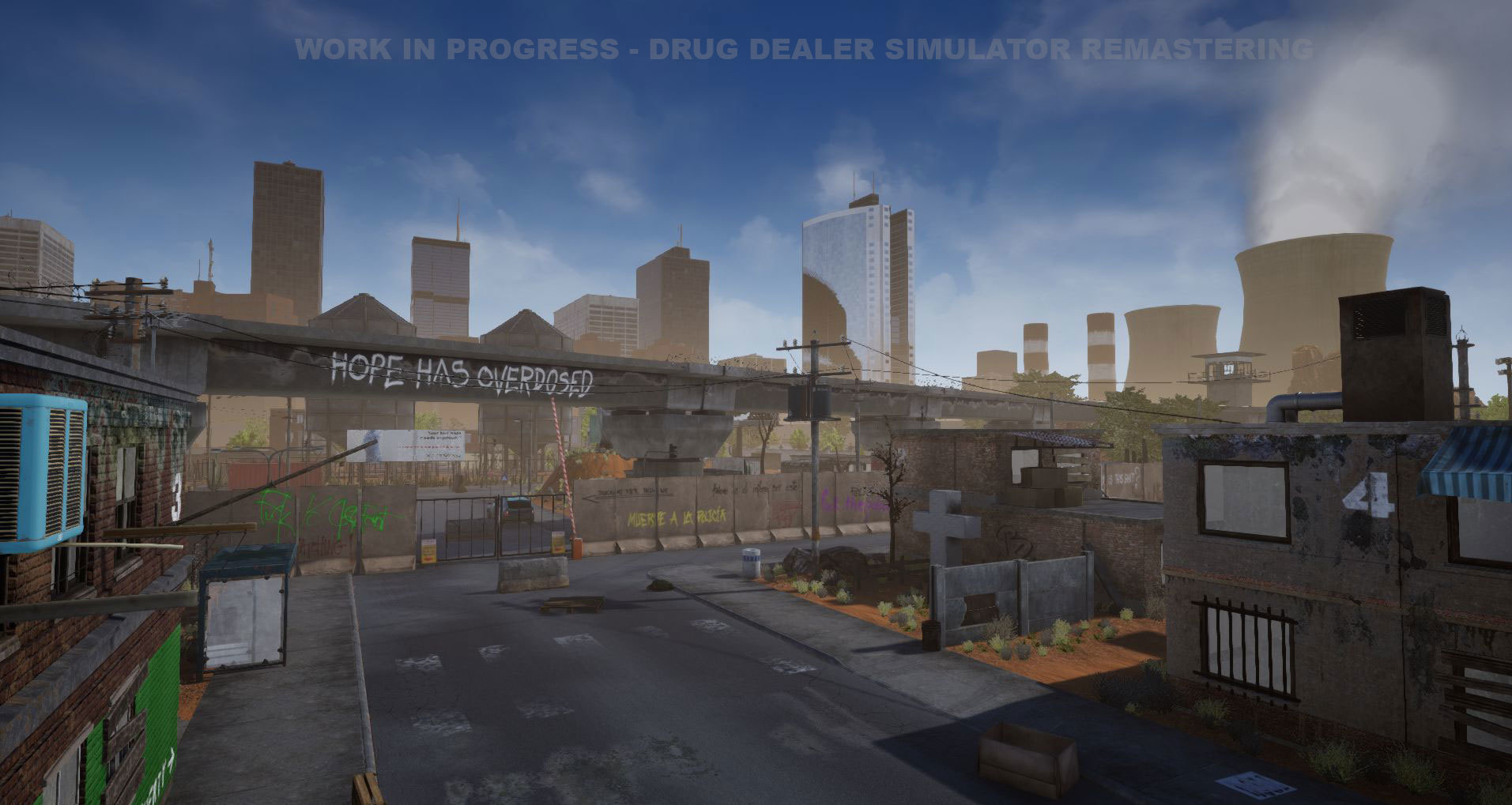 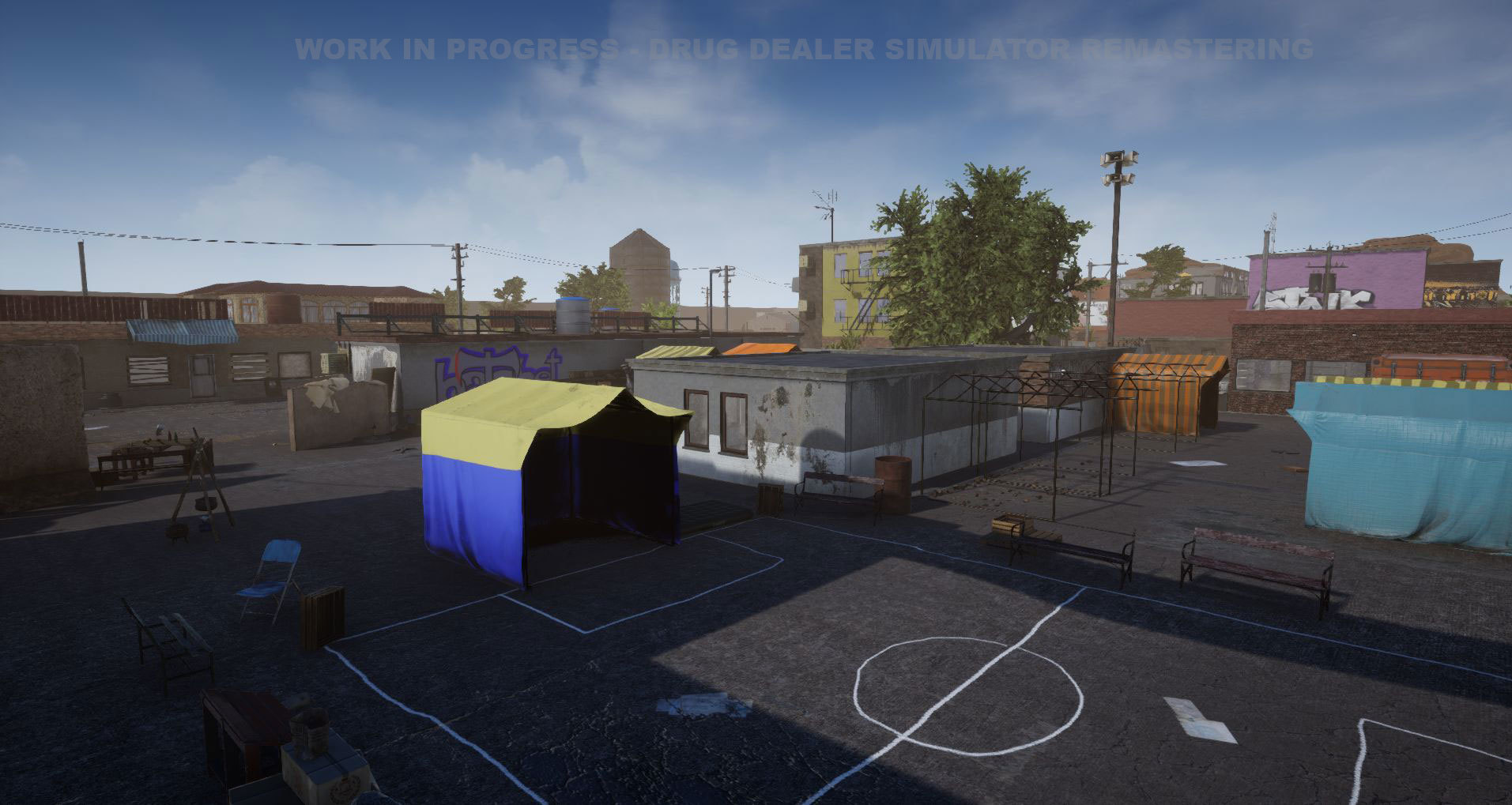 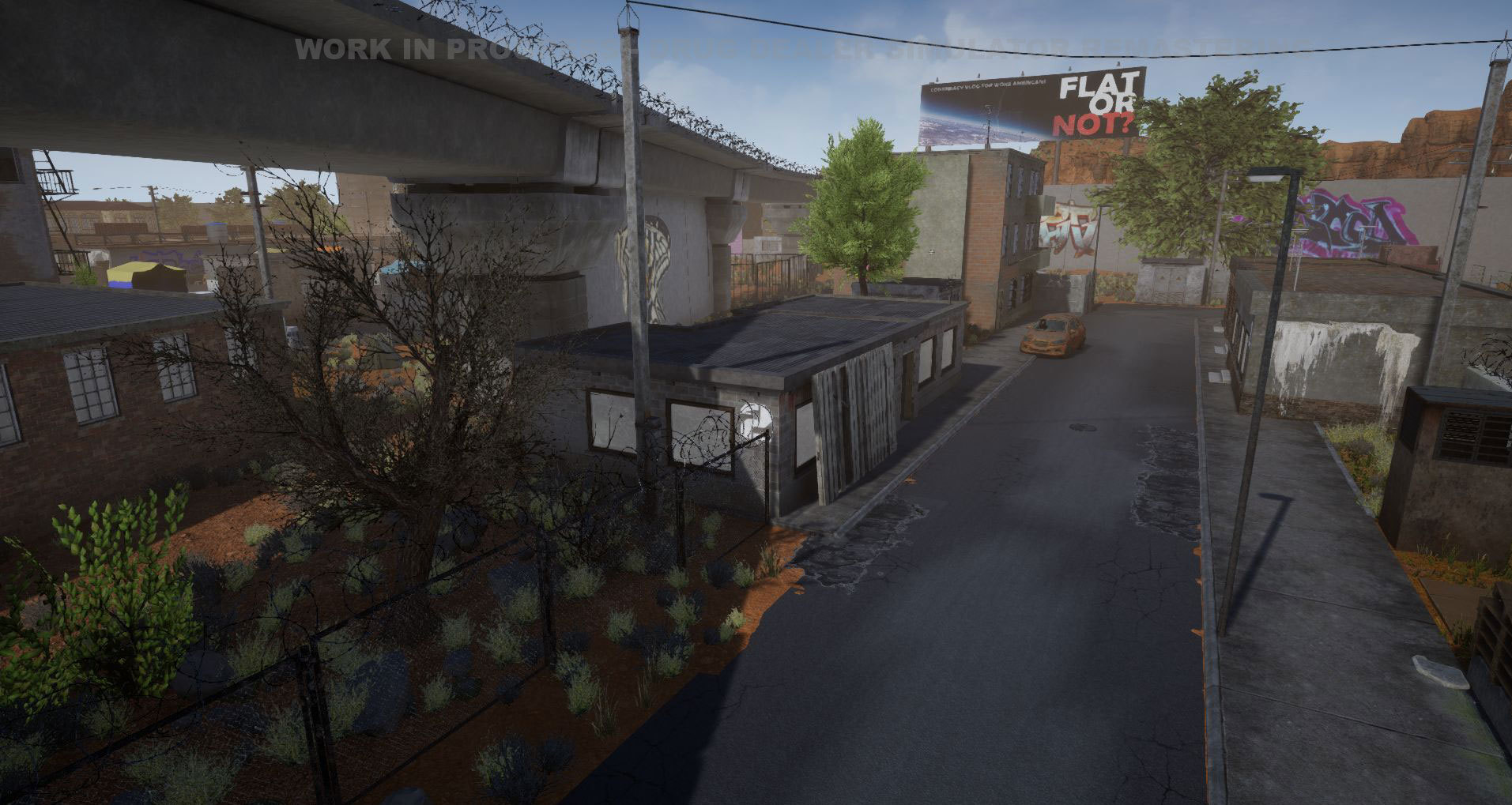 The 1.0.6 graphics remastering part includes:
- New models for the streets, sidewalks, train bridge and many others
- Remastering the environment materials, improved texture resolutions for some of the buildings and models and new materials for surfaces
- Completely new landscape material and textures, foliage reworking in some parts of the map
- Added multiple details and decals to the environment and wall elevations making them look more interesting and realistic
- Multiple small or large changes in the environment, new pathways, and micro changes in fences and many other

More improvements both to exteriors, interiors and items will be coming in the next patches. 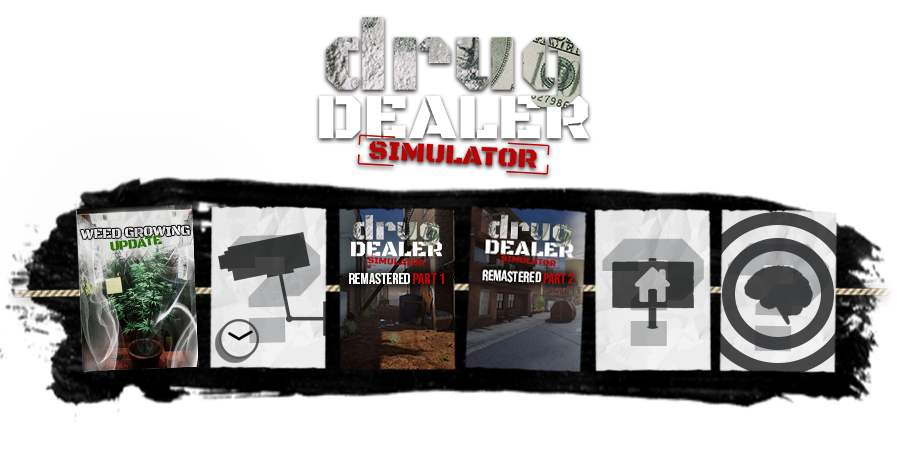 Ps. Do not worry, we didn’t forget about the second position on our timeline! We’ve switched them a bit, but everything’s on a right way and heading into the ghetto ;) 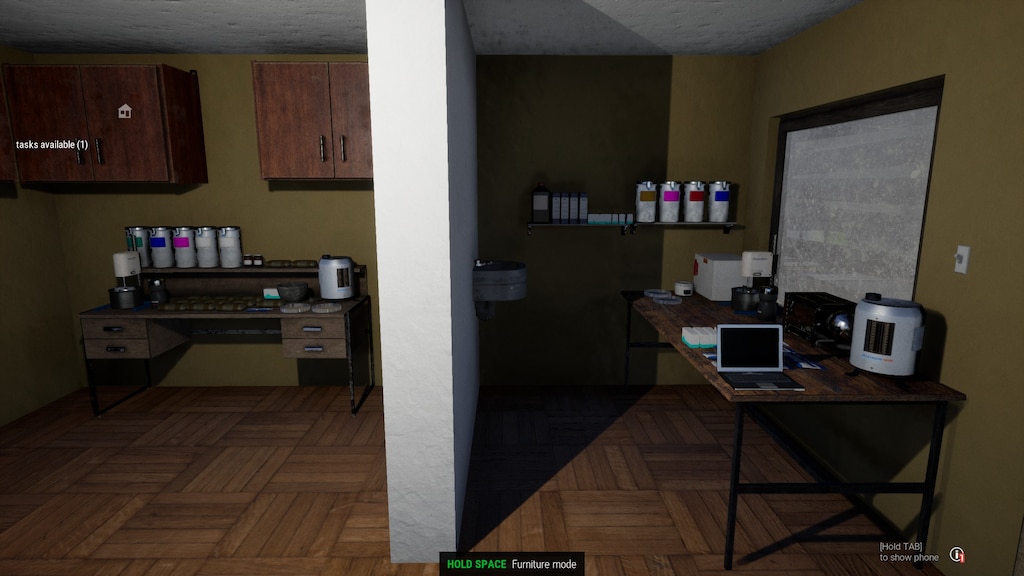 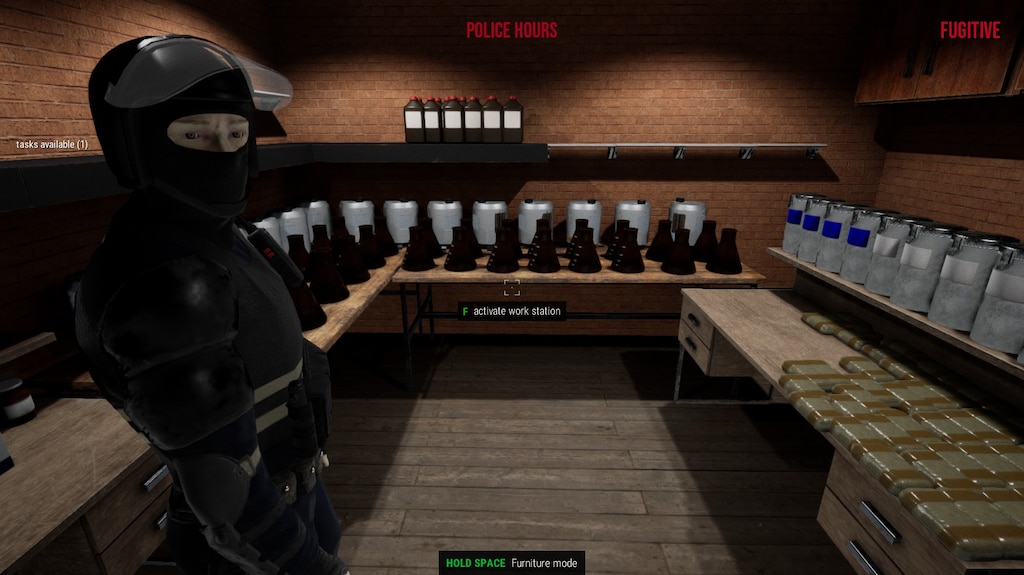 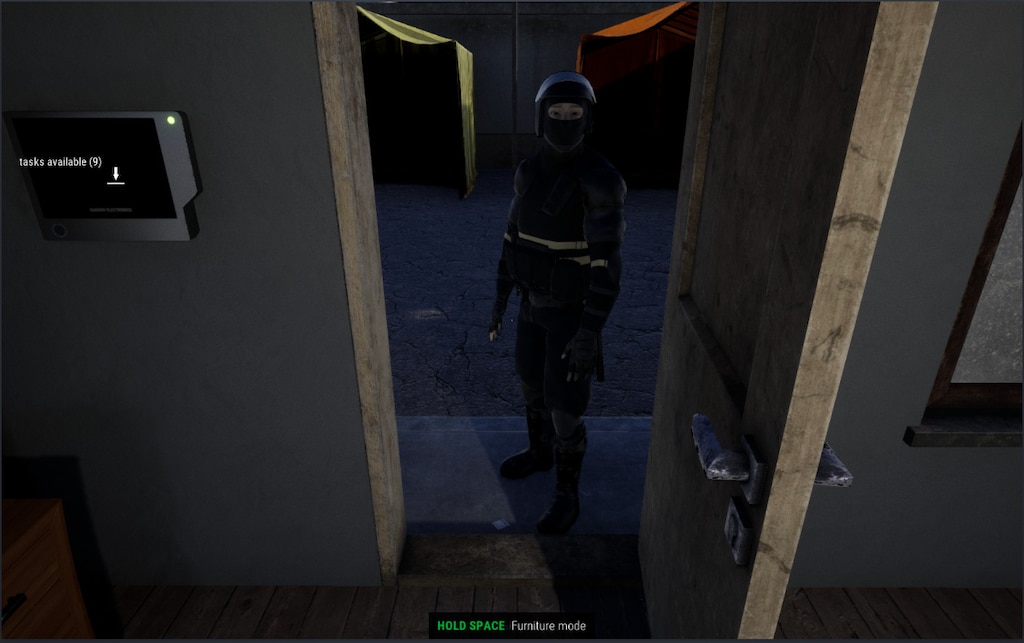 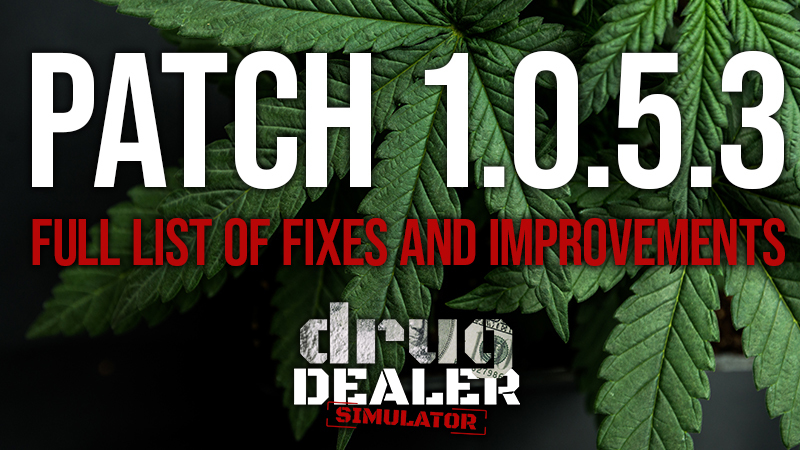 We're coming to you with the previously announced patch 1.0.5.3! The patch had to pass through very intesive tests, due to extensive technical changes to ensure that no new serious bugs or issues are present in the game. This one includes among others fixing bugs with reseting backpacks sizes, optimization of world object collision setting and additional languages.

- Fixed a bug, where for some players the gang level and pitcoin amount were not loaded properly when using the CONTINUE button in the main menu
- Fixed a bug, where the HUD task list wasn’t refreshing properly, causing the “Awaiting package delivery” status to stay after the package has dropped
- Fixed multiple inventory backpack bugs: reseting backpack size after game load, backpack sizing errors when dragging and dropping out of stacks, containers and more
- Removed a bug where it was possible to put an empty small backpack into a pocket by double clicking it in a container
- Removed a bug where in some cases laBallenas cigars where duplicating and floating in the air
- Fixed a bug where the player was prompted to spray paint on the ground in one spot in downtown
- Fixed a bug where alerted policemen where still chasing you after changing clothes in the clothes wardrobe
- Removed an exploit where you could duplicate money, drugs or other items by manipulating backpack stacks In containers
- Multiple map corrections for improved NPC navigation and glitch elimination


More changes, including new content and fixes are in the short run!

Byterunners & Movie Games
Over and out! 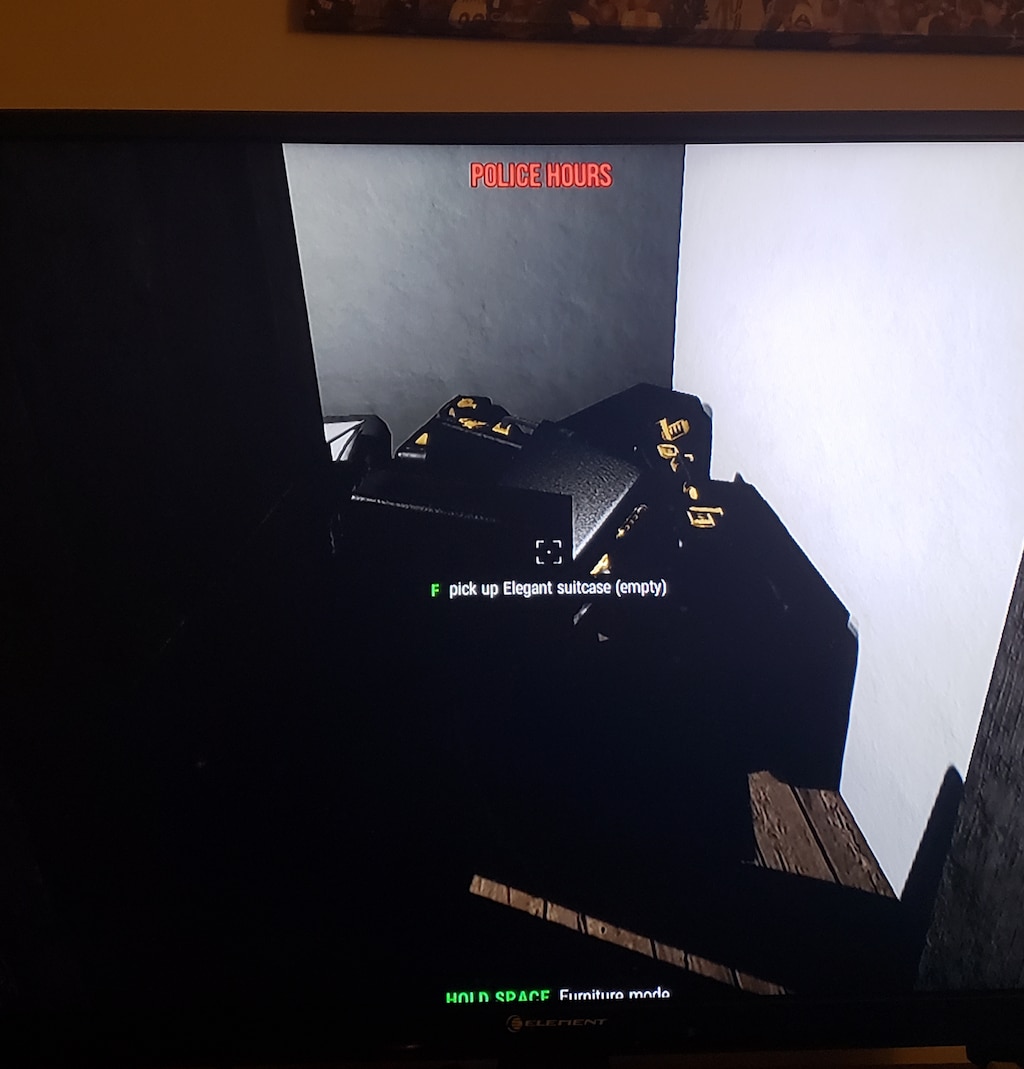 i waited a long time for this game.
but theres nothin more than a small demo in here.
one dissampointment hunts the other.
incopetence in its biggest form i ever saw from this dev team and publisher as well.

there are so many great ideas from the community and so many potentials in this game.

its only a little game with nearly zero content, loveless, devs dont care a sh*t, they a polishing the visiuals instead working on some "small" content updetes. release was 4 or 5 moths ago and 0 content updated so far.

dont waste your mony on this poor work.

Recommended
51.2 hrs on record
Fun but should only be played by people that are age apropriate.

1
0
Still impossible to grab some money, because it "doesn't fit" in my inventory. This game is still not done and has major issues. I would NOT buy again. 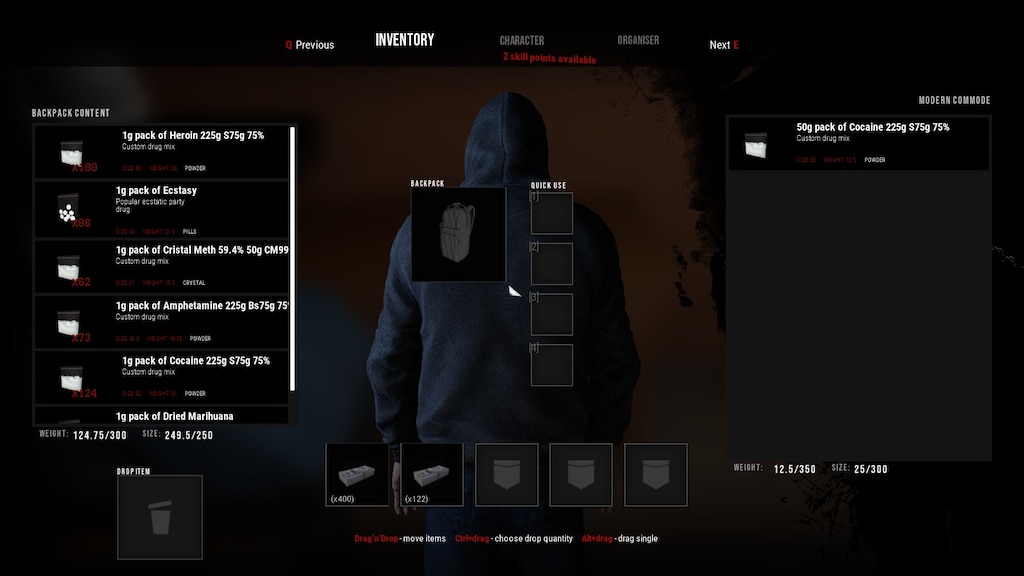 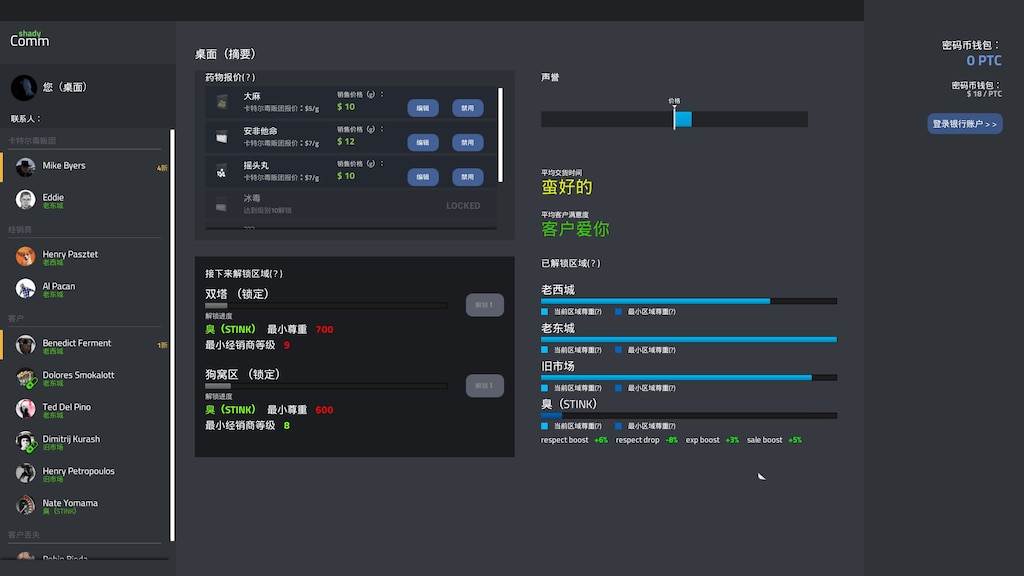 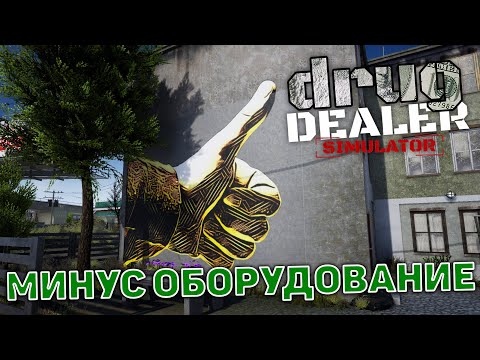 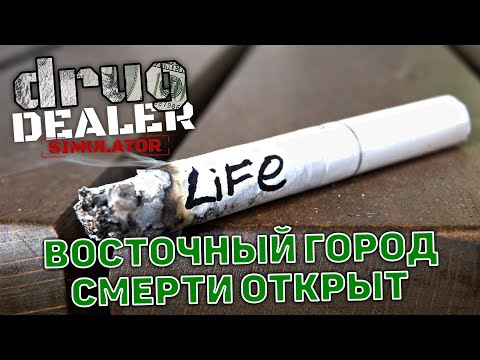 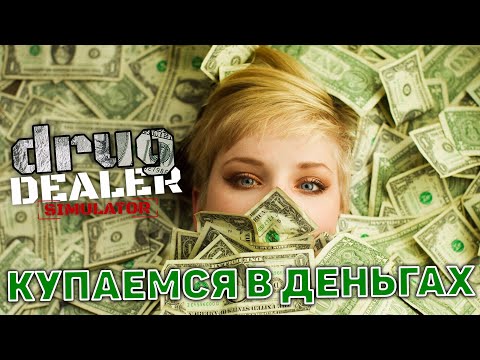 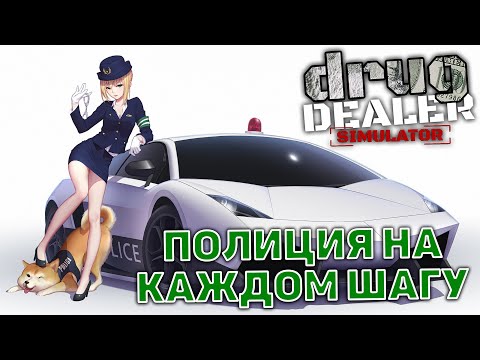 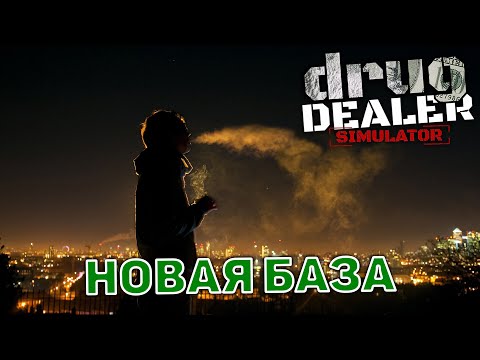 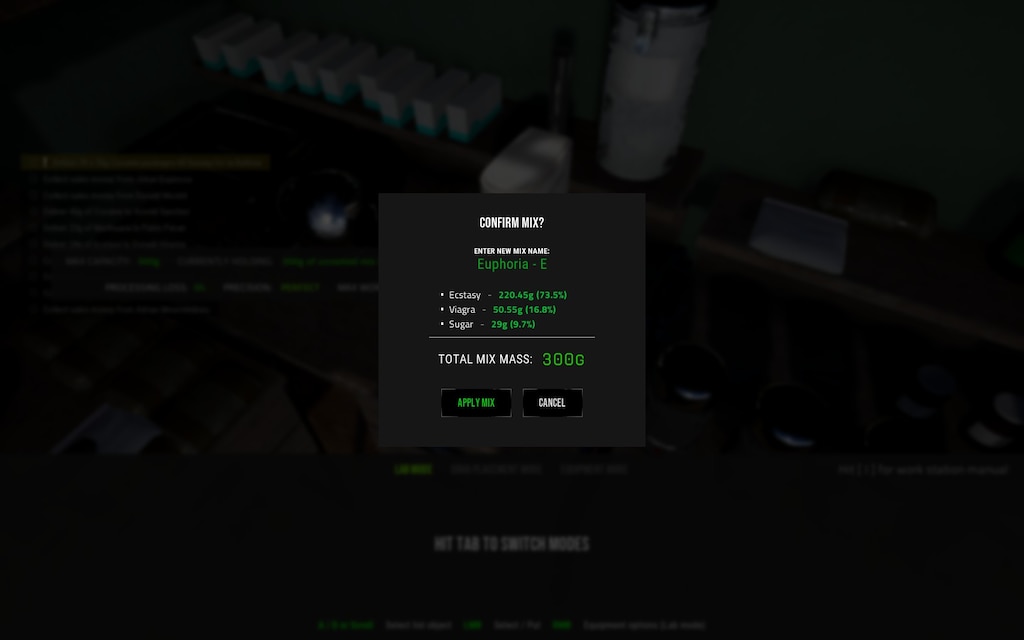 0
0
Otherwise known as Silent -E by others. You need a pill maker as well 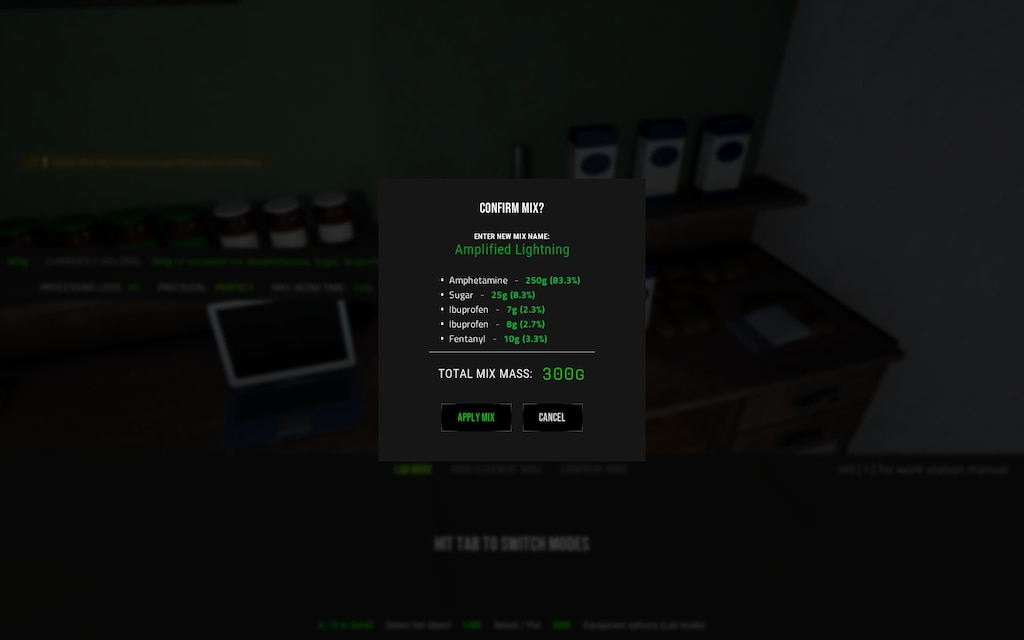 0
0
15g Ibuprofen. Shows split because the Garage and Chemist version is viewed differently. Variation of Blue Amp with Fent added.

Qwerty
View screenshots
Anyone find a good mix yet?
Keep trying to find a good mix for the amphetamine and keep loosing contacts. Has anyone found anything really good?
415