A theme park management tycoon game with an aquatic twist. Design your displays, look after your fish, manage your staff and keep your guests happy! It's all in a day's work as the curator of your very own Megaquarium.
-60%
$24.99
$9.99
Visit the Store Page
Most popular community and official content for the past week.  (?)
v2.1.2 patch
Oct 22
Bugs
Modding

Megaquarium
79
4
Does placement mean anything?
Do you actually need staff doors etc? Does it matter if you put all the workbenches and feeders out in the open? Do they have any negative effect on visitors? Does anything matter really or is it just a kind of no-effort sandbox? Thanks
5 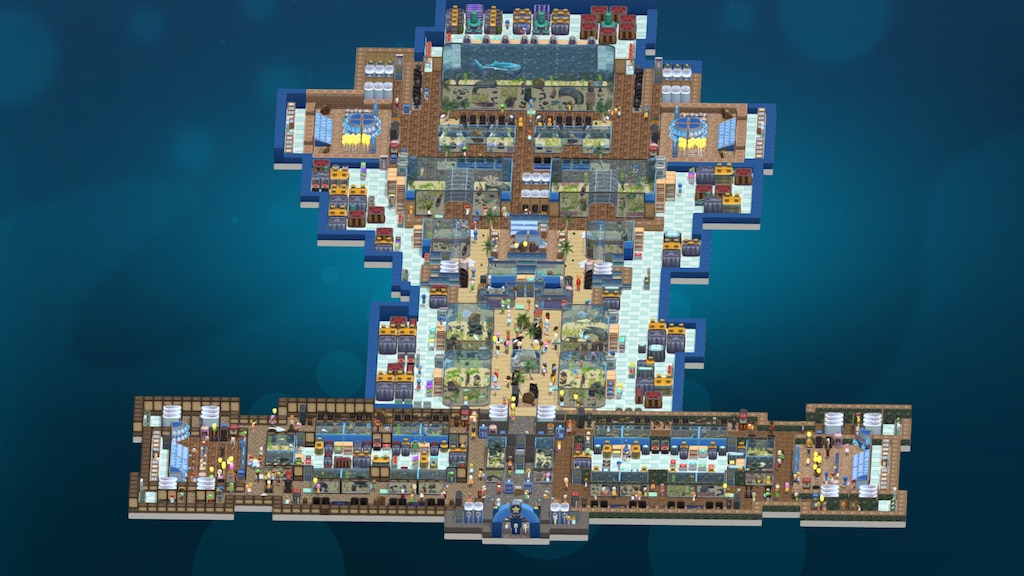 9
19
Completed 10 levels of campaign for Megaquarium! 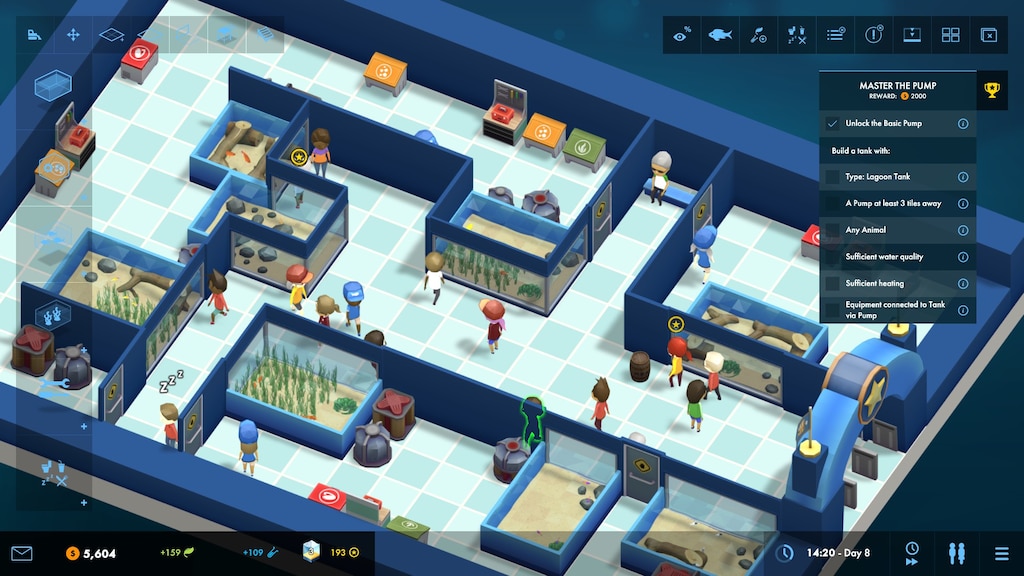 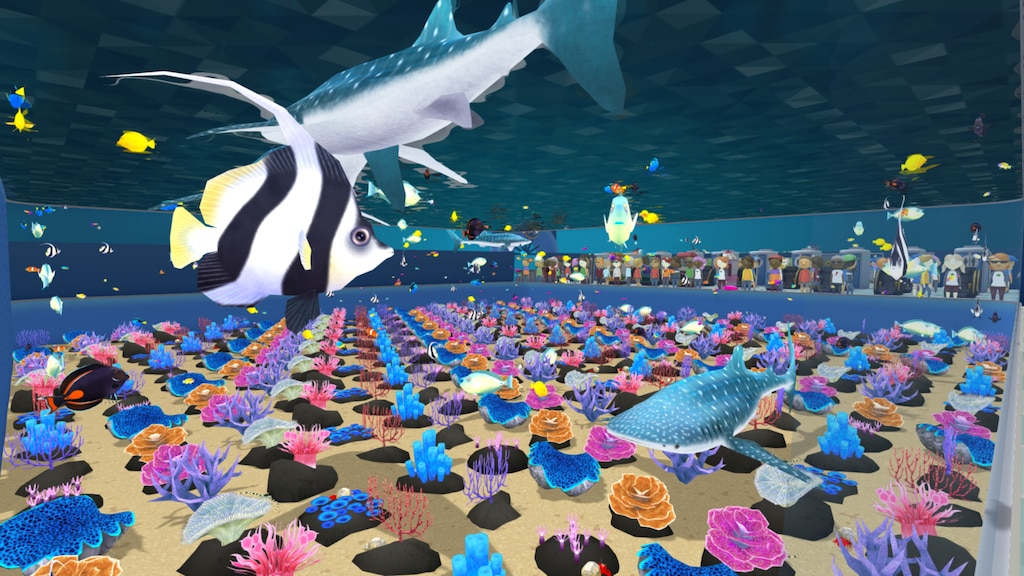 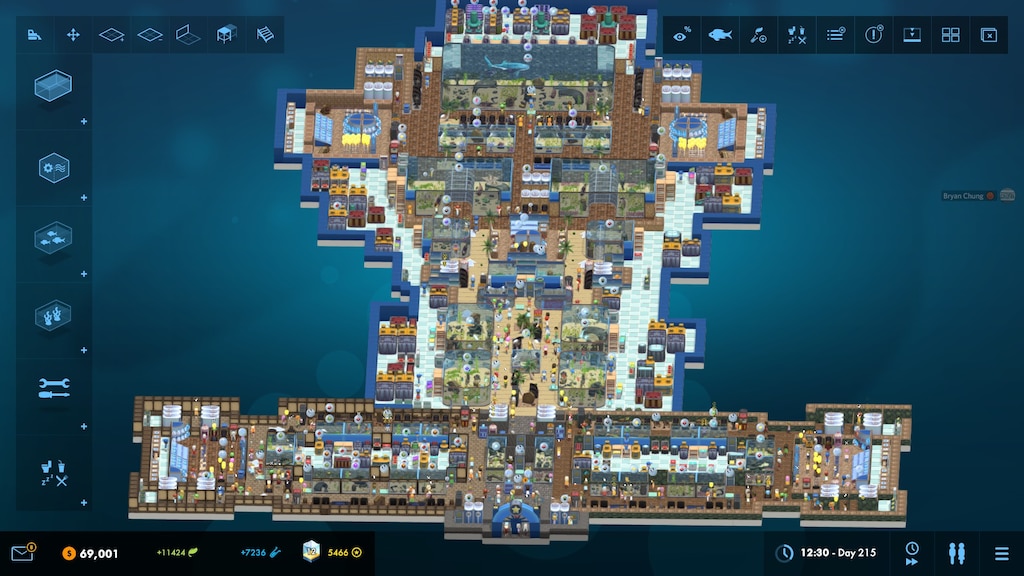 Basic Advice for Running a Successful Aquarium
This guide is meant to cover some of the finer points of running your aquarium. It does not cover the gameplay mechanics or campaign levels, although all the pieces of advice can greatly assist in the campaign levels. I will update and add more sections as...
35 ratings 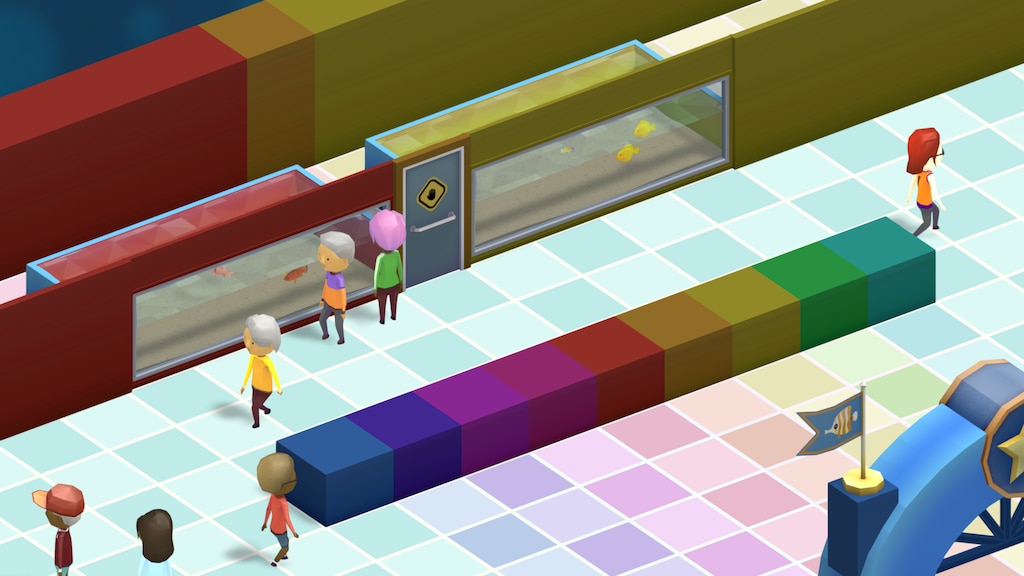 Tips and Tricks
This guide was written a long time before the freshwater DLC. Some information may be inaccurate due to patches, and the DLC. Though most of it should still be usable. I'll update and remove stuff as necessary and play it some more now that the DLC is out.... 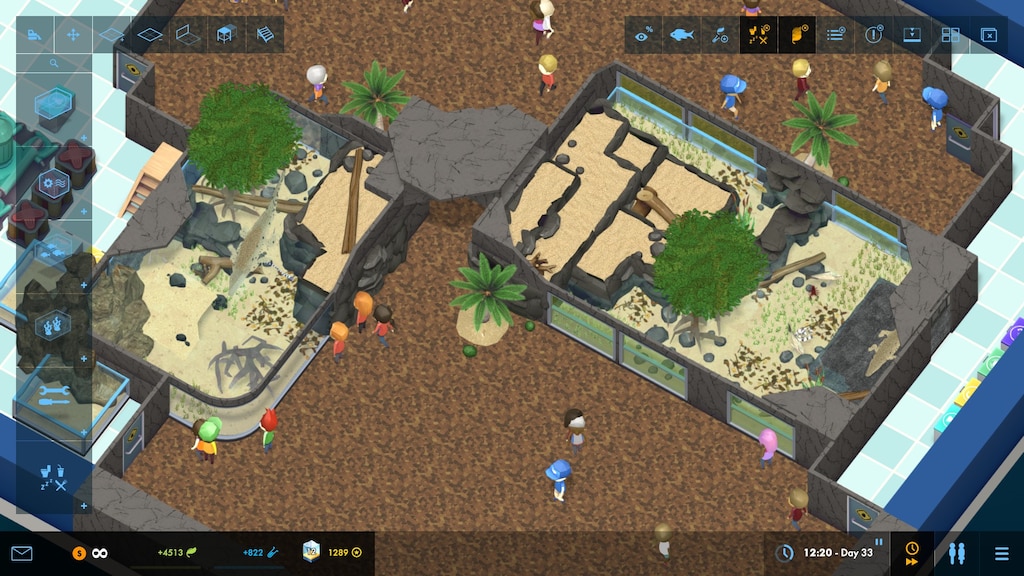 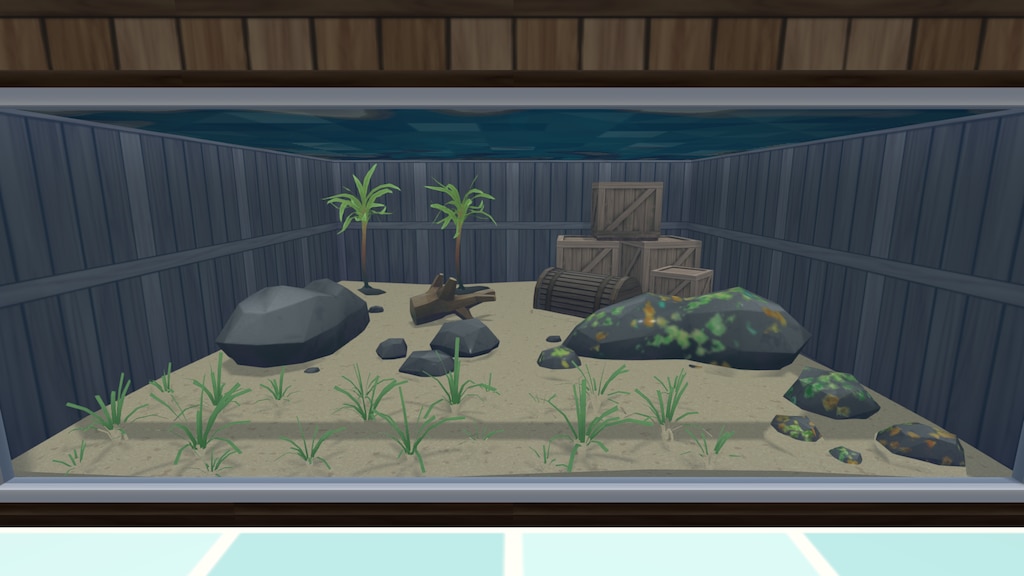 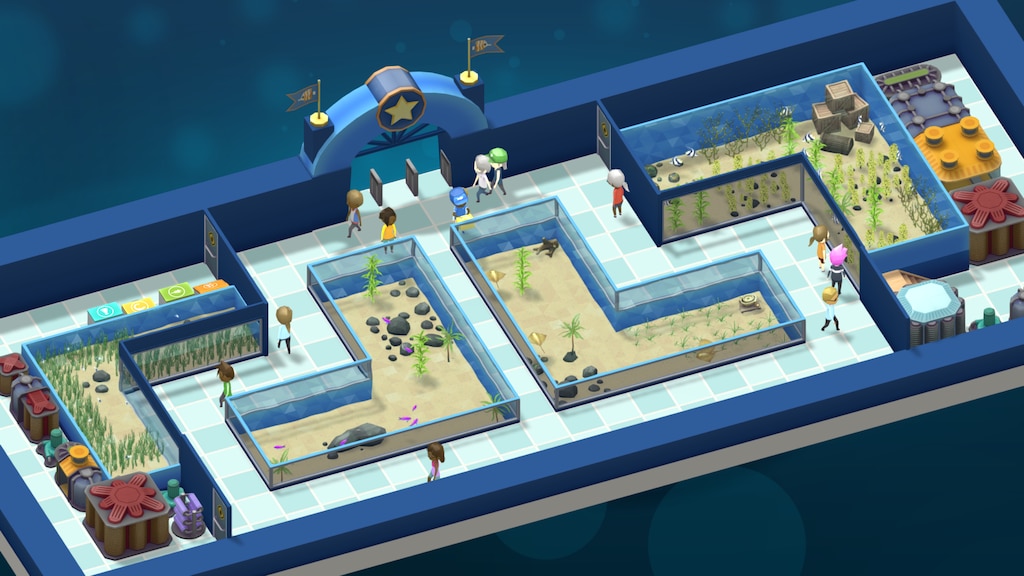 Hybrid list and some tips to get them quickly !
During the Freshwater Frenzy campaign, Some objectives or trades will require you get hybrids. Beside this, tanks with hybrids can also reward you with a big prestige boost. Here is a guide listing all the hybrids from the vanilla game, and giving you som... 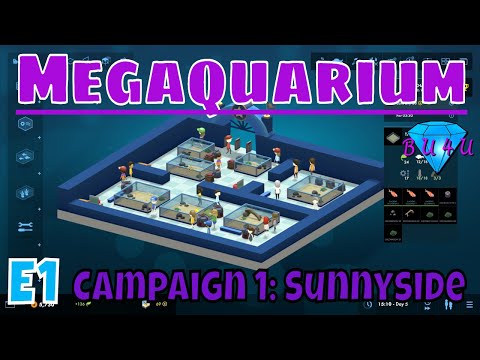 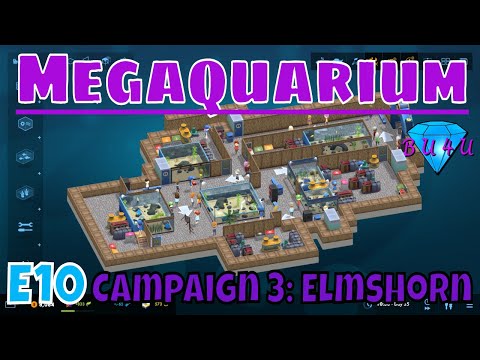 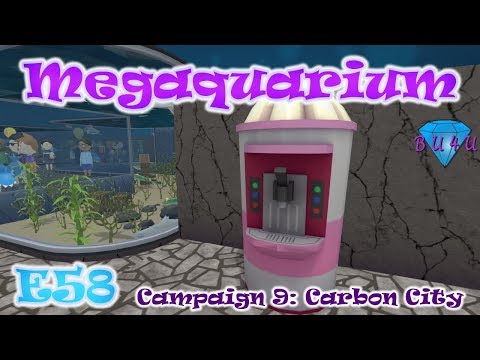 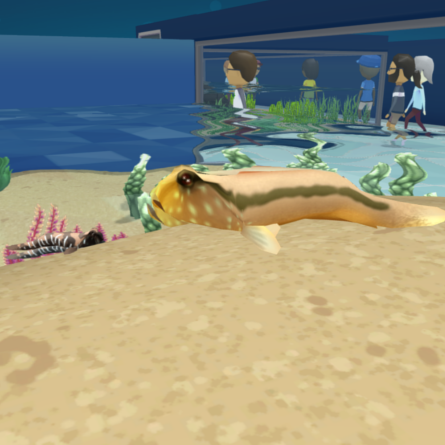 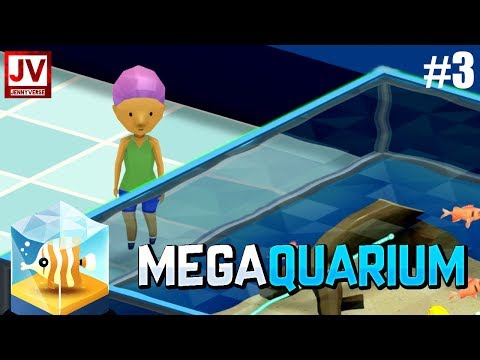 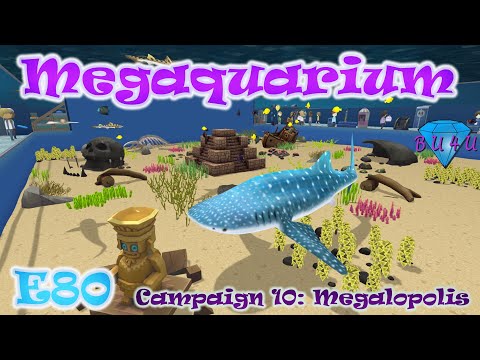 Not Recommended
15.8 hrs on record
There is nothing special in the management part of the game. There a lot of competing management games around.
I see two aspects that could be winning features (provided they have implemented with highest quality) for this game:
a) Graphics (see different Aqaurium screensavers for required quality);
b) Educational part (fishipedia, quiz, etc). 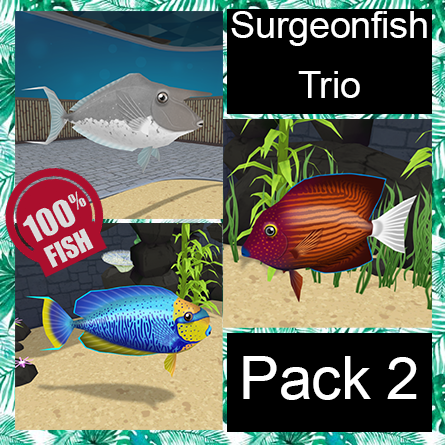 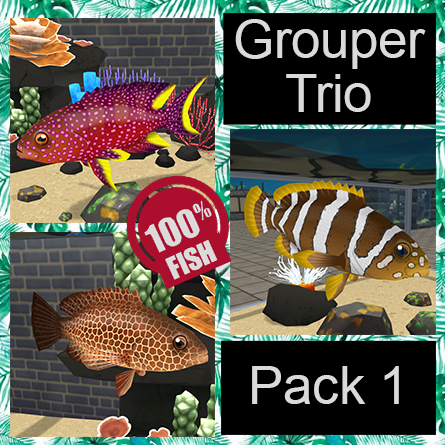 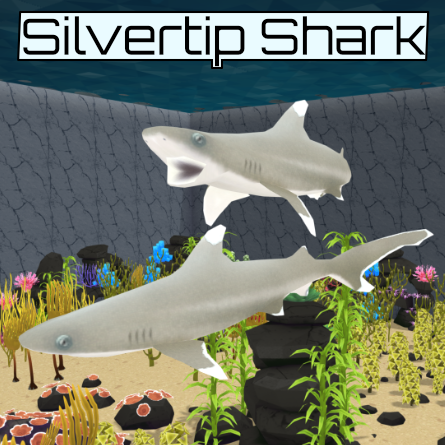 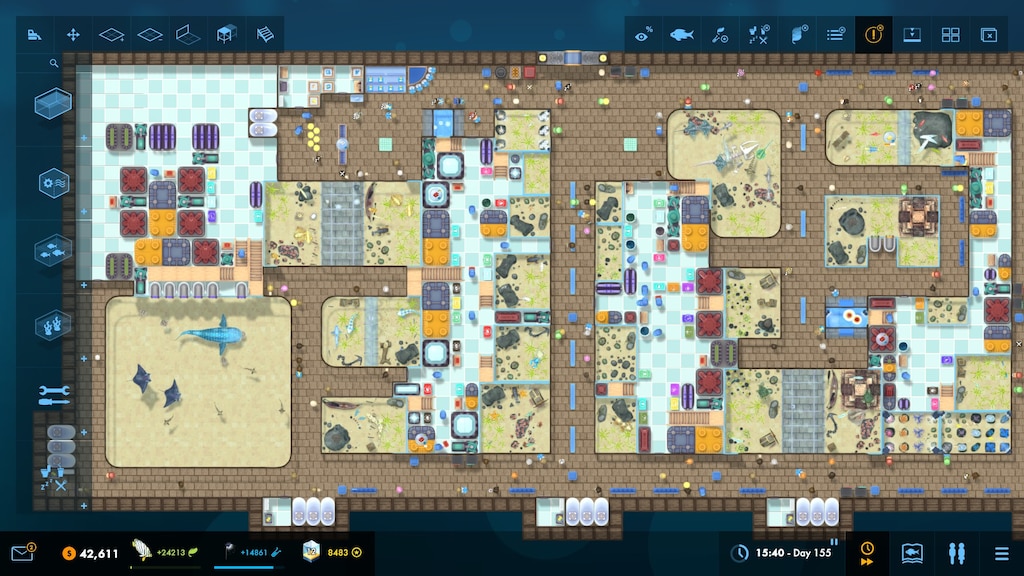 0
0
Top-down view of my final build for the final mission. So many hours spent! Could be optimized further, but I think I'd rather do it in sandbox. 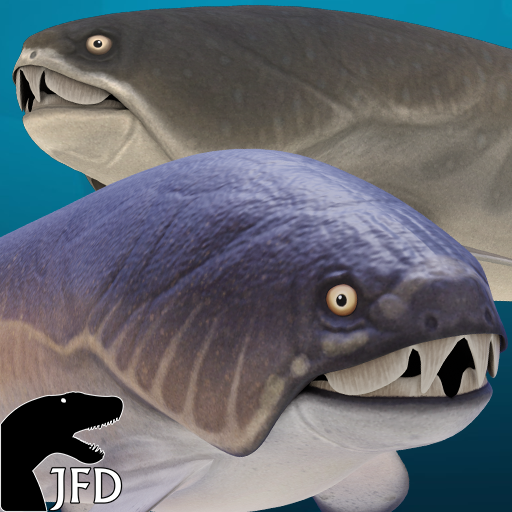 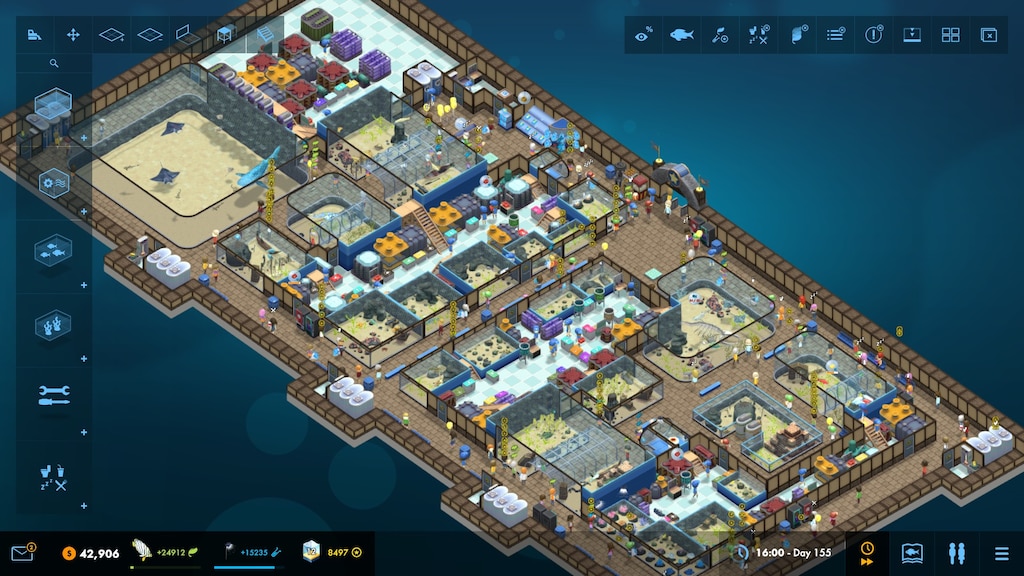 0
0
My final mission build, at an angle.

Not Recommended
3.6 hrs on record
Positive - A fun, light fish tycoon game
Negative - It feels a little too light, nothing to sink your teeth into.

GingeriousPrime
100 products in account
0
v2.1.1 New features - designed by you!
Oct 18
After spending the last week on the public beta branch, v2.1.1 is now live for everyone. Apart from a couple of minor bugs which I've now fixed, the latest update appears to be going down really well.

Thank you to everybody who switched over to the beta branch to test the new features, I appreciate all of your feedback!

I've posted the same information as appeared in the original beta announcement below, for reference.

New features - designed by you!
This update is crammed full of great suggestions that have come directly from the community. From an improved build menu interface to a button which allows you to toggle all your mods at once - this update is all about making it easier for you to play the game. A better interface allows you to concentrate on what's important - all of the fishies!

For a full changelog see the bottom of this post, but first let's take a closer look at the heavy hitters. 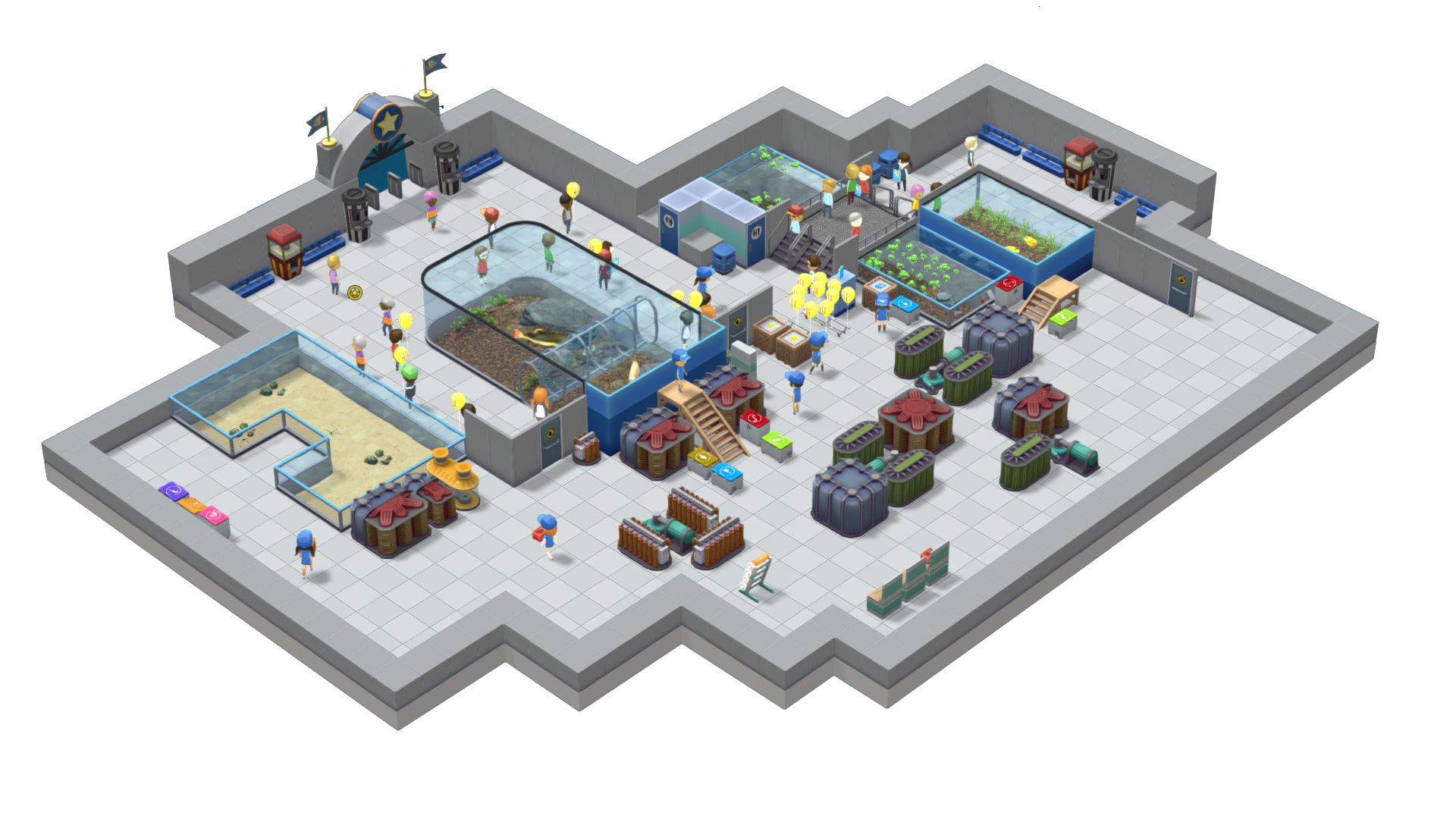 It's a subtle difference but for those who find the orthographic camera mode disorienting, this small change will make the game much more accessible. For the rest of us, it's a matter of personal preference.

Collapsible build menu categories
I wasn't 100% sure about this feature prior to implementing it, but I'm really pleased with how it's turned out. 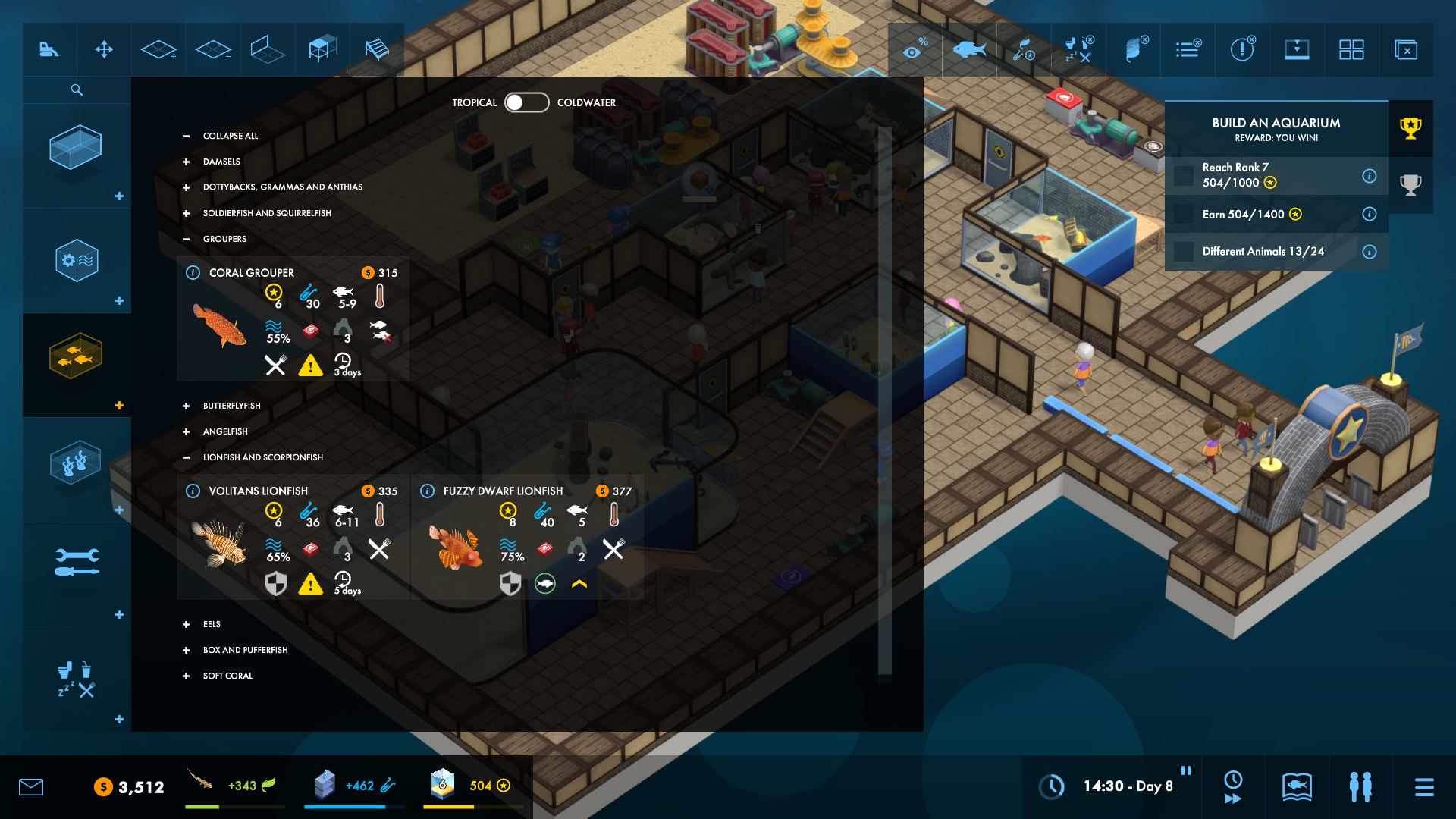 It's now possible to collapse individual categories in the build menu so that you're not looking at everything at once. Coupled with a button at the top which allows you to collapse/expand all the categories at once, it's now really easy to find a particular group that you're interested in.

I think this feature will be especially helpful to those players who have a lot of mods installed.

Tropical / Coldwater toggle
Another feature that I never considered until it was suggested by the community. There is now a toggle at the top of the animal build menu which allows you toggle between showing Tropical or Coldwater animals. 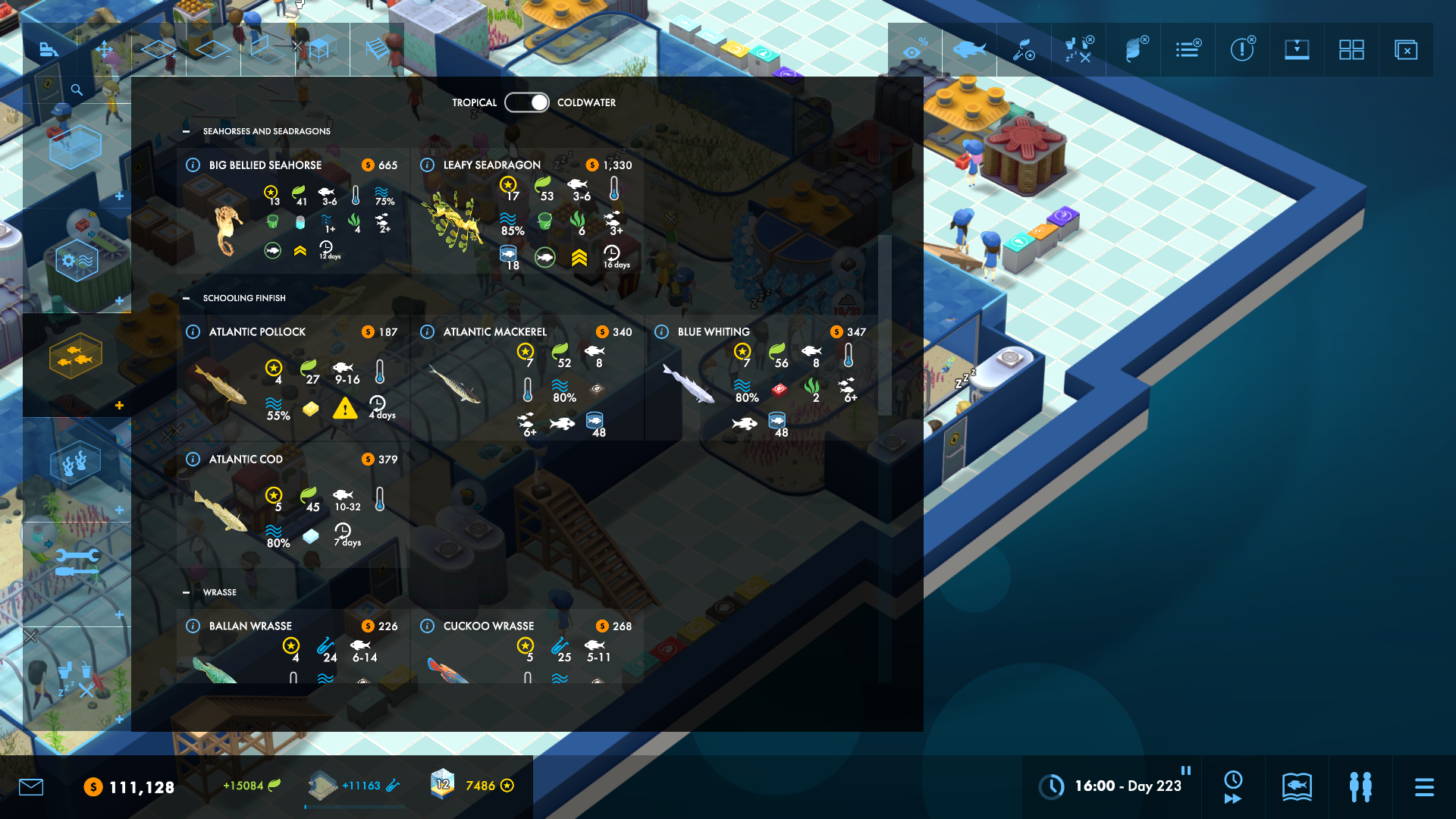 Given that these animals will never safely occupy the same tank, I can see how dividing them like this makes a lot of sense.

Improved growth icon
When you hover over the growth icon of an animal that isn't fully grown there is additional information now. As well as telling you how long until it grows up, it also lists any further stages of growth afterwards.

It's a small thing, but in my testing it made an immediate impact on how easy it was to keep track of things.

Enable/Disable all mods button
Modding enthusiasts rejoice! You can now enable/disable all mods with the click of a single button at the top of the Modding Manager.

Extra mod stability
Another one for people who use a lot of mods. If a mods causes the game to fail to load, then all mods will be automatically disabled and the game reloaded.

This will at least allow players to get into the game. From there, they can re-enable mods one at a time (or in groups) via the mod manager to try to determine which mod is causing the issue.

The most common cause of the game failing to load was when a mod depended on another mod for extra animal food types, but this depended upon mod was not installed. If this specific case is detected by the game, it will now automatically insert "Orange Pellet" as the required food for the animal, rather than fail to load.

Megaquarium
238
26
Is this game difficult?
thanks
6

Denephew Ffog
Nov 25 @ 2:34pm
General Discussions
What animals would you like to see in the game and why?
Hey all, I was recently asked if there was a place to suggest and discuss animal choices for the game so I thought I'd make one. Here's what animals I've announced so far, I'll add to the list as I add more to the game. Obviously these are the first few ranks, so obviously there will be lots more cool stuff to come (sharks, jellyfish, cephlapods etc.): Rank 1 Azure Demoiselle orchid dottyback Half and Half Chromis Rank 2 King Demoiselle Arabian bluelined dottyback Yellow Tang Blackbar Sold...
486

Twice Circled
13 hours ago
General Discussions
Mission 3 Help
I can't complete the side quest to unlock the Toadstool Coral, I have a huge belfast tank full of grown eels and schooling banner fish and all sorts of different pants ect and yet all objectives read 0. Must be doing something wrong but I can't figure out what it is....
2

JAME
Nov 22 @ 1:23pm
General Discussions
[Suggestion] Compilation of a Page or Two
I think we need a suggestions pinned somewhere. Browsing the forums so far - coupled with a few of my own. 1) UI Scaling/Spacing • The interface right now is a little too large for what it needs to be. Most of the empty space padding can be taken awa...
321

Zamboo
Nov 22 @ 7:42am
General Discussions
No one has rated this review as helpful yet

Recommended
24.2 hrs on record
Excellent game of management for aquariums, lots of different species to tend to and things to calibrate.