Outscape is everything you love about traditional strategy games, but places your empire within a vast online galaxy alongside other real players. Outscape rewards skillful long-term strategic gameplay with a brilliantly refreshing new take on the 4X genre.
Visit the Store Page
Early Access Game
Get instant access and start playing; get involved with this game as it develops. Learn more.
Most popular community and official content for the past week.  (?)
Patch Release v126 – November 08 2020
Nov 8 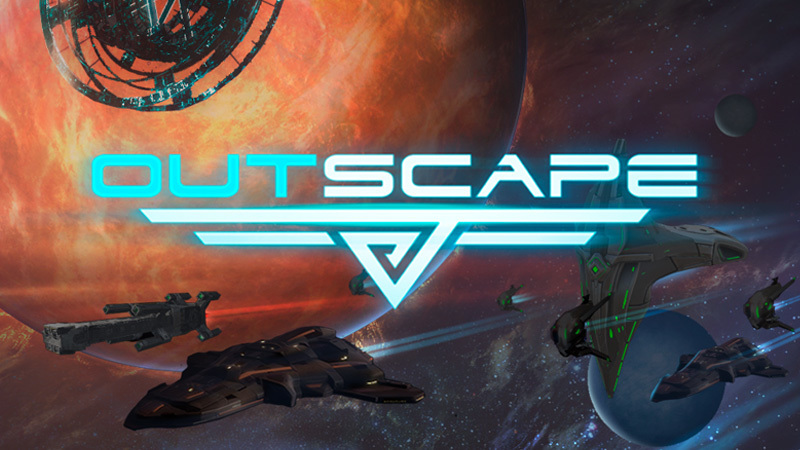 Here are the patch notes for the v126 update that has just been released. It should download automatically the next time you launch Outscape from Steam.

Gameplay Changes
Troop numbers decline x10 faster in the Andradite galaxy if there isn’t enough military bases to support them.

Other
The environment improvements we’ve been working on have been implemented. These improvements should help with performance particularly concerning disconnections.

Discuss this Patch on the Forum.[forum.outscape.net]

Outscape
9
0
Just make it free to play
There is only one way to save an unpopulare game , its to set it free to play to open for the masses, there is no other way. Also you better rework your game to make it less time consuming aka less bases -> more fun.
8

Lord Dralisz
Nov 21 @ 7:47pm
General Discussions
Release: Game update [v126] [Complete]
Hi everyone, The release of Patch v126 will begin today at 16:00 UTC. Once the update has started the servers will be offline for up to 2-3 hours. We’ll update this thread as soon as the patch is ready and the servers are back online. This update will take much longer than the usual 30~ minutes because we’re making environment improvements at the same time. These improvements should help with performance particularly concerning disconnections. Update: this patch has now been ...
3 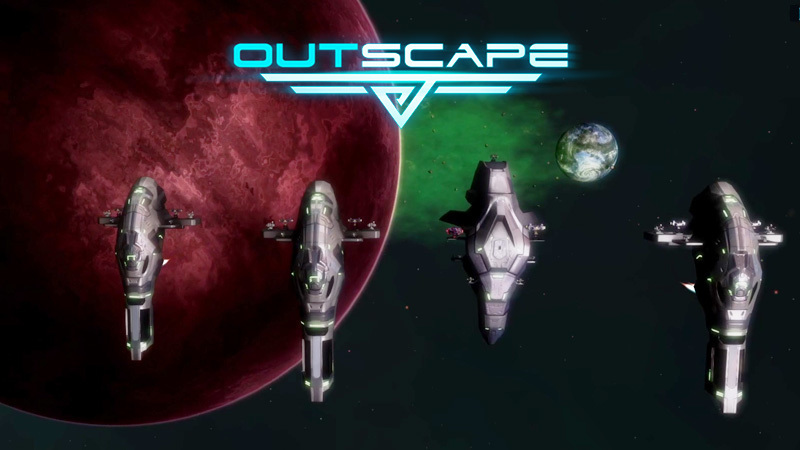 Here are the patch notes for the v125 update that has just been released. It should download automatically the next time you launch Outscape from Steam.

Zathabar's Ten Jumpstart tips for new players
So this is a few pointers to get players who have no knowledge of Outscape from making some of the more common mistakes I've observed in the near two years I've been Alpha testing it There IS a wealth of info for the game on the main forum and on the wi...

How to Avoid Being Ganked
A brief guide on setting up your corner of the galaxy and not being squashed by established players. 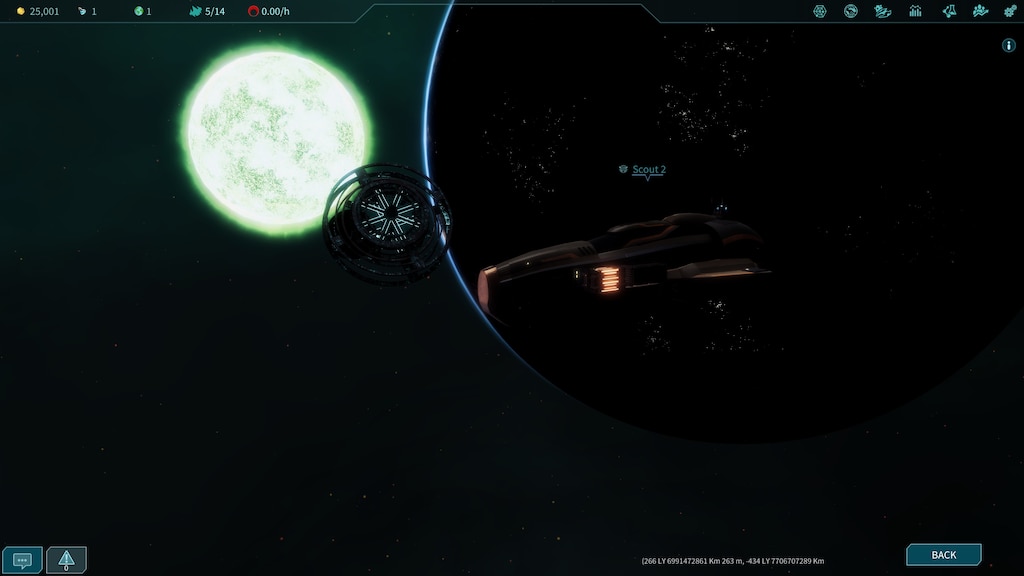 Technology Quickstart Guide
With the size and depth of the Technology Trees in Outscape, it can be difficult to decide what to research next, particularly for new players. This guide is intended to break down the task of research into natural stages, and give advice on which technolo... 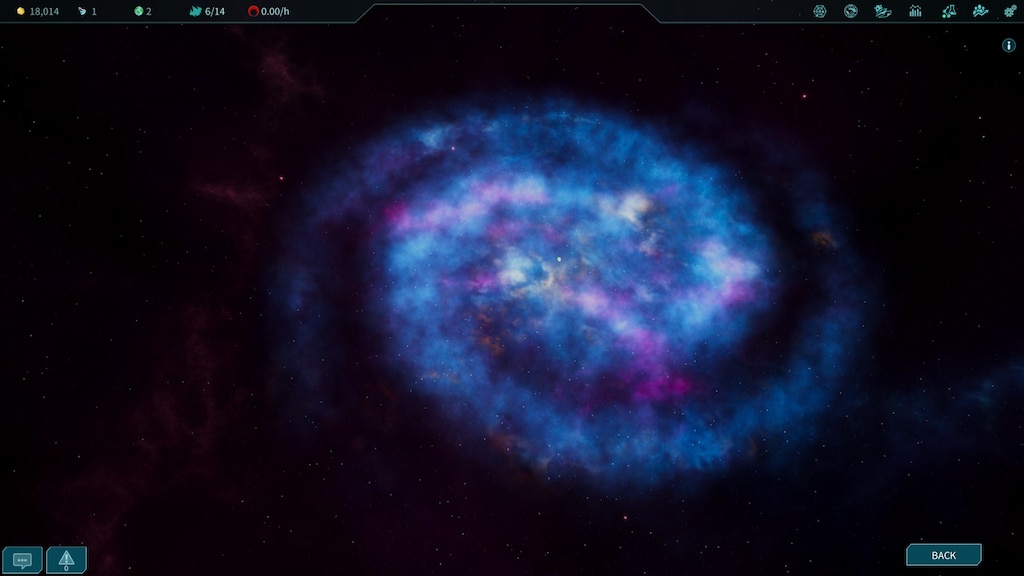 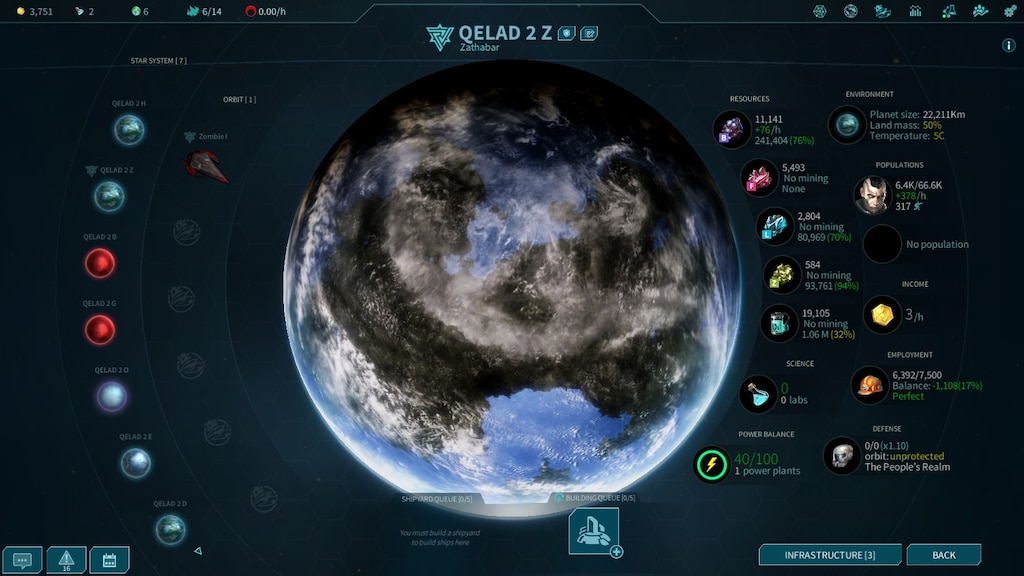 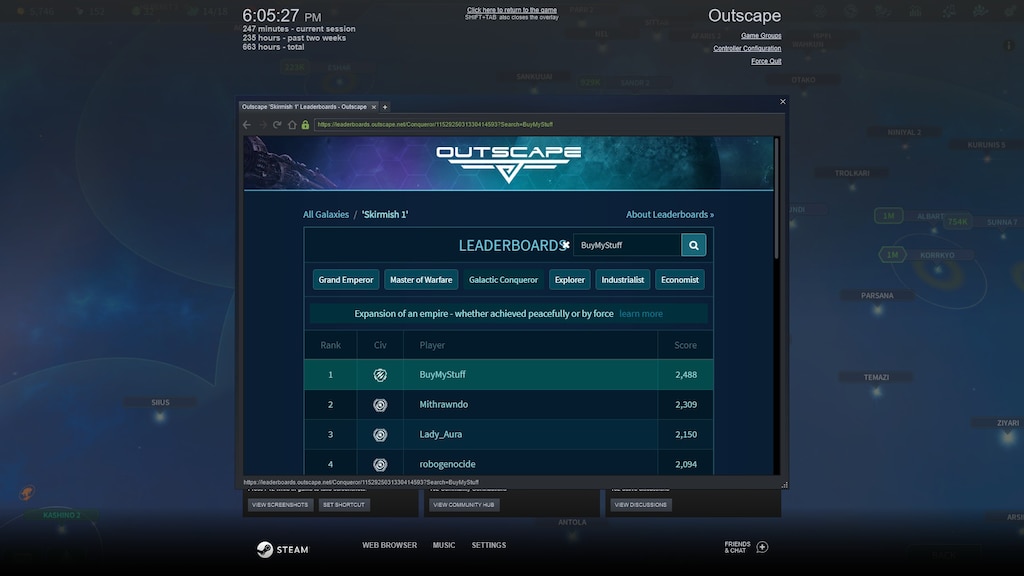 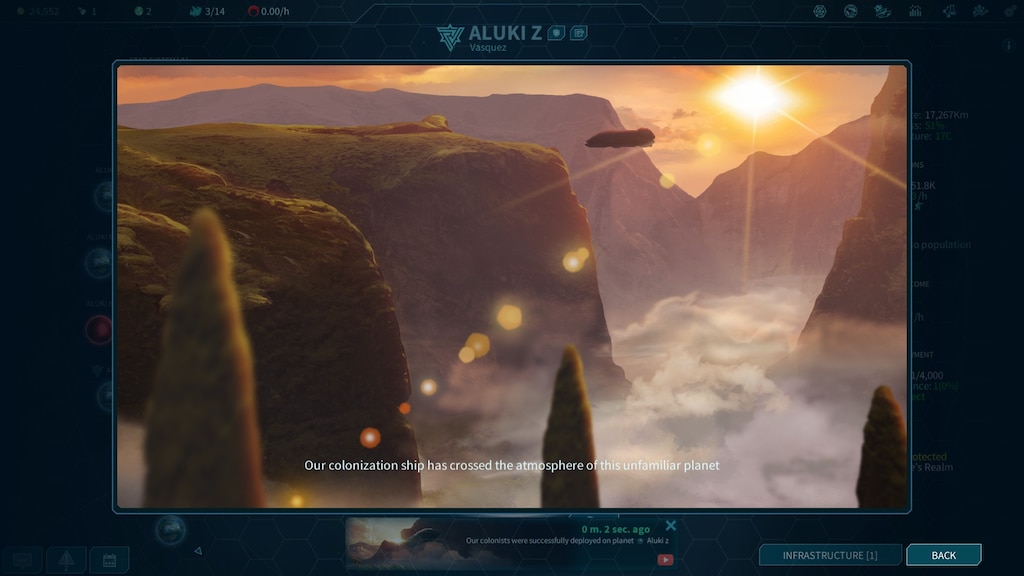 Vasquez
View screenshots
Any reason its no longer buyable?
I would like buy the game still.
4 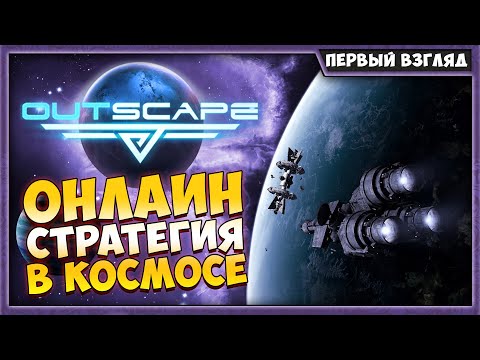 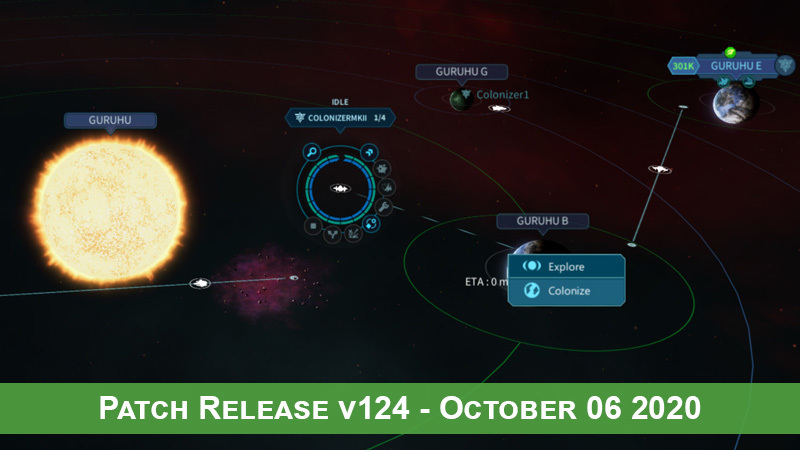 Here are the patch notes for the v124 update that has just been released. It should download automatically the next time you launch Outscape from Steam.

Not Recommended
892.8 hrs on record
Early Access Review
Not in its current state. Let me explain.

I have been playing since the closed alpha. The galaxies Alpha 2 and onward, playing over 4 thousand hours total, with the closed alpha hours along with my almost 900 on this version. When you see this game on the store you are seeing a massive online galaxy where all players exist, you colonize and build up planets and then defend them with fleets. You can choose to attack other players for any means, be it resources, or total domination. Like alot of people say the concept it great, but in the games current state I cannot recommend it.

First of all the fleet battles are boring. The reason we play space ship games is because its cool and fun to set up your unbeatable strategy and watch them decimate the enemy. Well, in Outscape there really isnt a strategy to be had in terms of individual battles. The two fleets simply warp in face to face and shoot it out. They do not move, they just sit there and unload as much ordnance as possible. There simply is no strategy in fleet battles. You may think its cool and all to choose your very own formation for the fleets, you can put ships anywhere inside the circle. But you get to a point in the game where you have so many of these fleets that doing the formation and targeting is just so tedious that most people in this game with a potent navy, simply have all of their fleets in the default clumped up formation and targeting set to random for all ships. The only things we can really do to change a battle is choose which weapons to use. But today in the game there are only a few usable weapons out of the near dozen we have. In fact, fleets in this game are basically just blocks of code with a health and dps stat, whoever has more of these will win. So, we have all of these different ship types, destroyers, frigates, corvettes, battleships, cruisers, dreadnoughts. But there is literally NO point in using anything but dreadnoughts and battleships in a fleet battle, because all a destroyer is to a battleship is a smaller ship with less slots. Literally, the only reason the destroyer and frigate exist in this game is a progression, once you get t2 theres no reason to use t1, once you get t3 theres no reason to use t2 or t1 anymore. Because like I said, all the ships do in the battles is shoot as much as they can into the enemy fleet before they die. You may think, the dreadnought being the biggest ship, should be the most protected? No. Theres no way to protect ships in this game, if it is engaged in a fleet battle, there is no way to avoid attacks. In fact, dreadnoughts are actually one of the first ships to die in a fleet battle. You have a freighter in your group to collect cargo? Well as soon as it is engaged it will die no matter how many warships are with it. Since all the enemy has to do is set its targeting to a specific kind of ship.

Next up, it is way to easy to get wiped out. From my above paragraph, fleet battles are literally a game of who has more stats. So if your navy isnt at least a hundred 18 ship dread/battleship fleets, you stand no chance against a decent player. You log off for the night and you have your mind set on a plan on what to do in the morning. You wake up to your alliance raging in the discord, and you are so eager to login that you are having a hard time deciding if you want to use the bathroom before checking the game. You finally log on to see you have lost many planets, and pretty much all of your fleets destroyed. All you can see is in one system there is over a 100 fleets in it and your planet is so far in the labor shortage that you literally cannot use it. You see many more fleets moving in between your systems ready to bomb them away. Literally being unable to do anything, you just up and quit the galaxy. As I am writing this I notice I havnt told you guys what the problem is. The problem is orbital bomber fleets. These fleets can wipe out a portion of your planets population in a single salvo, which takes only 30 minutes to launch, in which that only one or two salvos will take your planet offline due to labor shortage. This is the only viable tactic at the moment, since we are supposed to be defended by orbital defense systems. But the thing is, bombing simply takes the least time. An invasion on the other hand can take up to a day, of you having to stay in orbit of the planet being shot by anti orbit missiles. Not only is it less time consuming, but its far less risk involved with just wiping the planet. Remember how I said I had over 4k hours in this game? Well all of that time at least for me has been spent building my planets and fleets since I personally was a friendlier player. Across multiple galaxies, I have sunk thousands of hours in the game simply building things. I admittedly have never been at an all out war with someone, but I like to consider the if. If I were to be attacked I would likely get wiped out overnight. Since my personal play style I wanted a compact empire, since more planets means more micro, and thus becomes harder to keep up. With my compact empire of 16 planets, it would take no more than a few hours to roflstomp me. Each bombing taking only 30 minutes, wiping out hundreds of thousands of population per strike, and you can have lots of these fleets.

Another problem is the quality of life. I mentioned above that you eventually have so many fleets where you just dont care about the formation or targeting. The problem, is the ui is glitchy sometimes, slow, and is downright boring. You have to pick up each individual ship and place them wherever you wanted them. This wouldnt be a problem for a few fleets, but people in this game have hundreds.

One more problem is lack of engagement. Remember when I said people have hundreds of fleets? Well, in the most recent galaxy, I have only nine fleets. Thats the point at which I got bored and felt no need in continuing to build anything. Literally, everything we get in this game can be gotten by just waiting. Step 1, colonize a planet. Step 2, wait for population to grow. Step 3, wait for deep mines to build. Step 4, wait for resources to stack. Step 5, wait for ships to build. The devs tried to throw in a little pve interaction by adding pirates and asteroids. Well, pirates are alot rarer than they should be, and asteroids run out. So theres literally no point in getting level 2 or 3 ship miner modules, because in your first days of gameplay you would have mined every asteroid in your space.