Prove your strength of mind and spirit and you just may be crowned Caesar!
$5.99
Visit the Store Page
Most popular community and official content for the past week.  (?)
small problems on windows 10 laptop.
if there is anyone who works on this to make it better and better. I run windows 10 on my laptop. the fire is invisible, just shows as a ruined building. and the water is also invisible in the reservoir.
4

The basics of Caesar III - AUGUSTUS EDITION
The essentials of Caesar III, from how to build city blocks to bigger resolution mods, and how to install Augustus, a massive improvement over the base game.
126 ratings 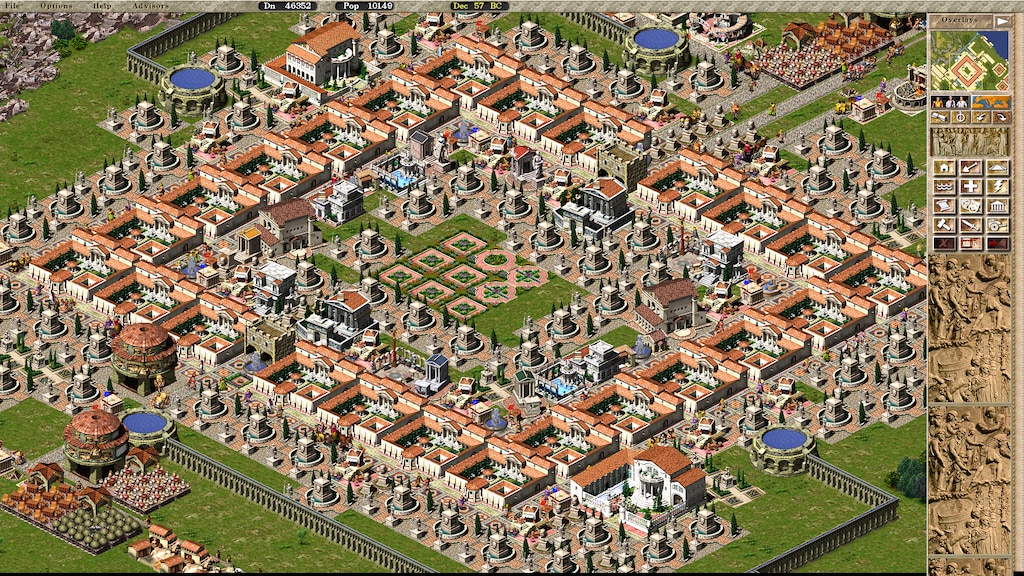 FlameHaze
View artwork
Will not start
Can't get this newly bought game to start. What can I do?
5 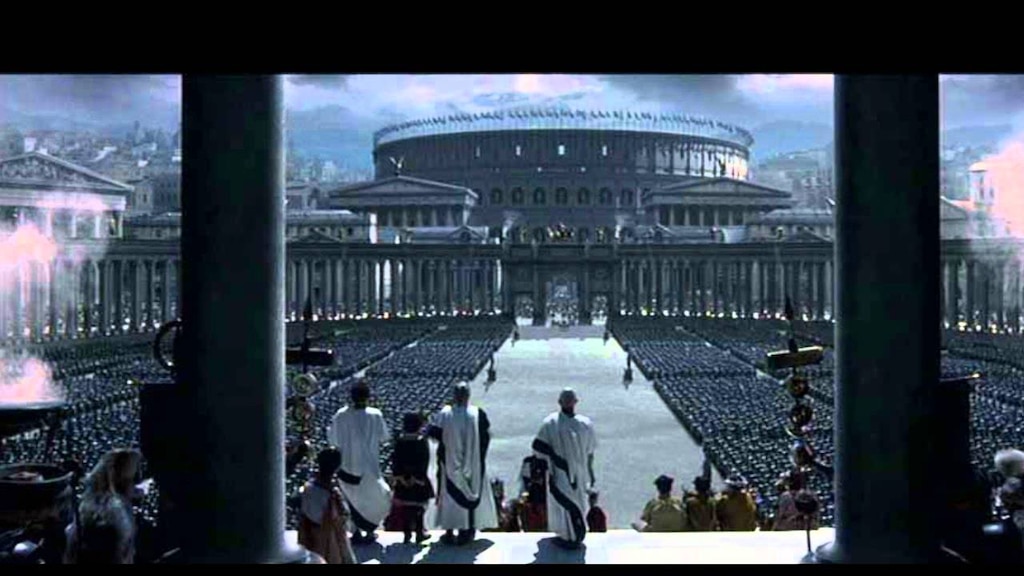 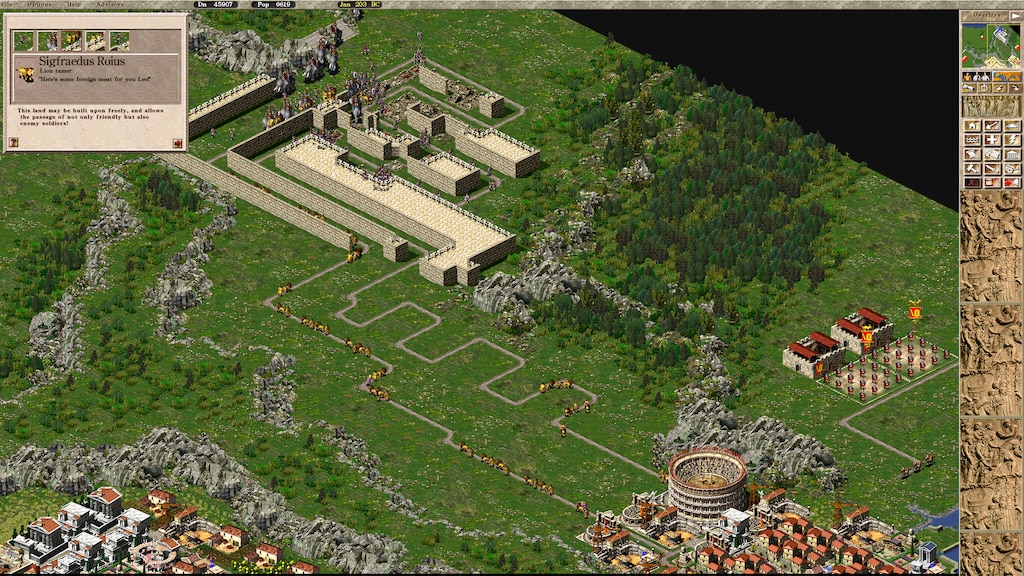 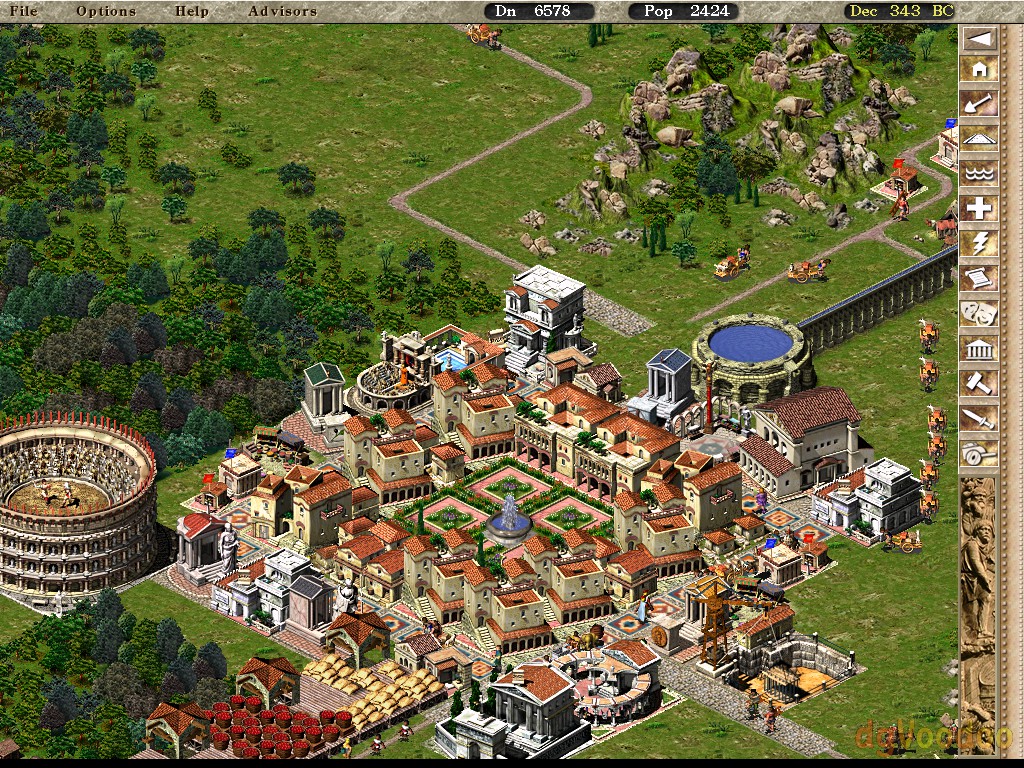 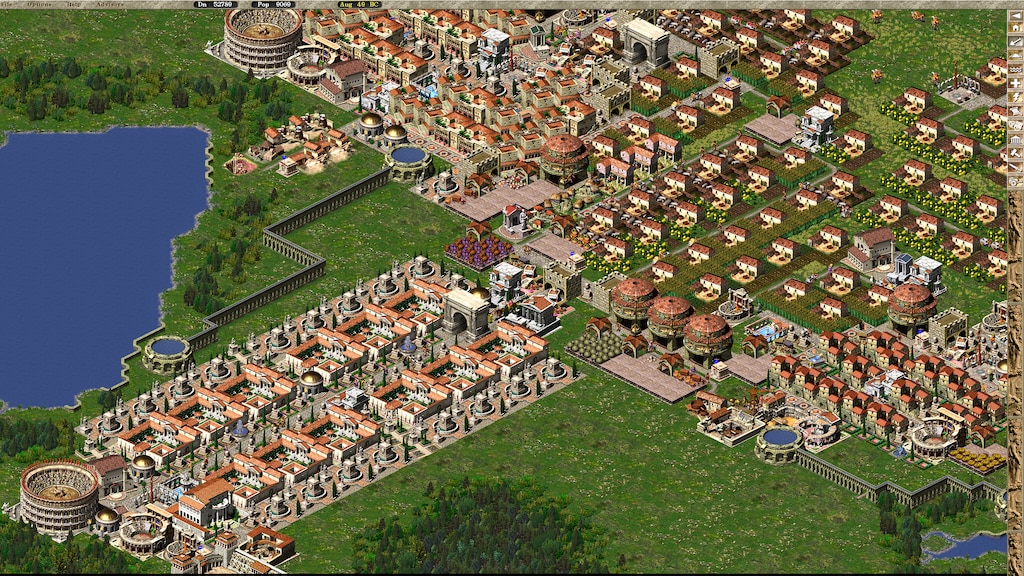 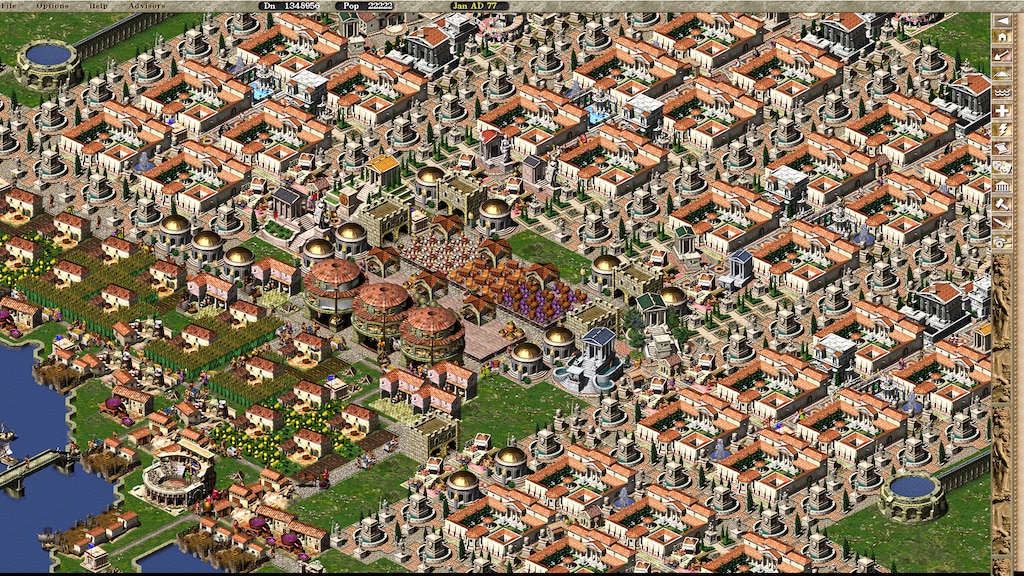 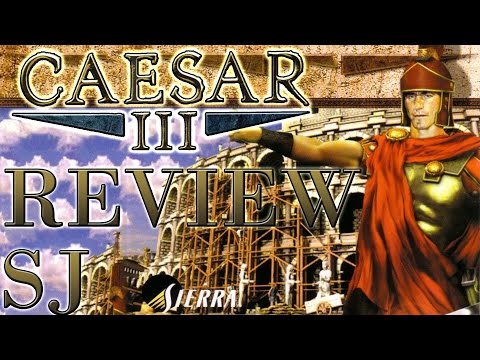 Recommended
69.1 hrs on record
I spent 100's of hours on this game before Steam even existed! I remember waking up early before elementary school so I could play just a just a bit more. I remember sitting on the couch in middle school writing out strategies. I remember high school trying to apply things I learned in history class about Rome. I remember coming back from college and playing this game with fresh ideas on how to approach the same problems. Each level adds new challenges and jumps enough that you're not stuck into repetitive strategies.

Despite all the time playing it I've never beaten it, but I refuse to look up how to beat the game or cheese the system. I come back every few years and spend another 100 or so hours playing it through eeking just a little bit further down the campaign. I'm well launched in my adult career, but I still remember 8 year old me so excited the amazing graphics and getting worried about the approaching armies.

11/10 would buy and play again. Well, obviously I did, because this is part of my steam library now. 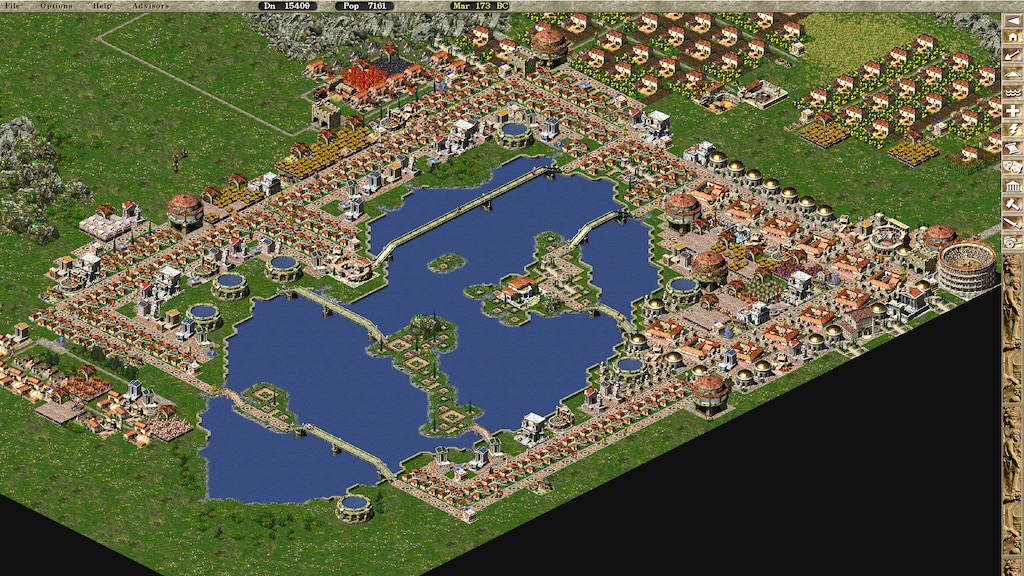 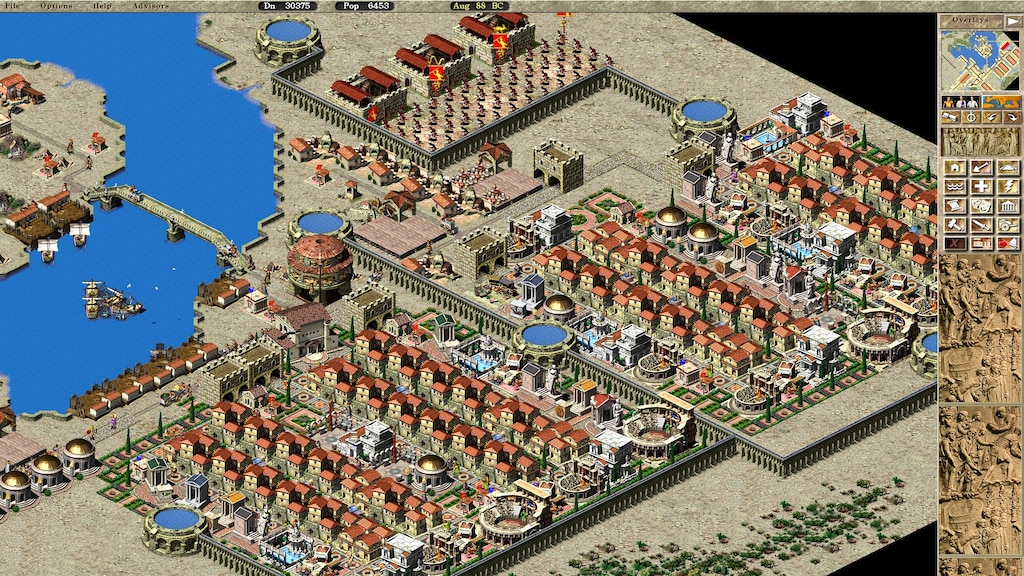 Recommended
30.8 hrs on record
This is a nostalgic classic for me. My grandpa had this old computer in his basement where me and my cousins would play this game when over for thanksgiving or other family visits, so it has a special place for me.

For an honest review, this is one of the most challenging city builders I have played, definitely has some irritating features but it is also really fun too. There are some things that are broken in my opinion.

Irritations:
1. Trade - You can set warehouses to be centers of trade but sometimes traders will go to the wrong warehouse, or they will not trade you enough of a resource you are trying to import. It requires a lot of finagling with the trade/warehouse settings, and isn't as intuitive as it could be. There is no way to set how much you can import of certain resources, giving player less control.
2. Markets - If certain resources are not close enough to the market lady, she will take forever in keeping certain areas fed, furnished, etc. You have to build the markets in a way that allows you to corral the market lady into going where you want, again, infuriating that you don't have control over this, or that it isn't simply a set number of square perimeter around the market that feeds X amount of tiles. Have to build granaries close to the markets as possible, but not too close to the neighborhoods.
3. New Players - I obviously have rose tinted glasses as per my intro, but this can be a really tough game to just pick up and start playing if you have no experience. It can seriously be one of the most rewarding games to play, it comes from a time where these kinds of games just have such a charm and certain rules and game mechanics were more loose, and the campaign is really fun. My recommendation, turn off God powers. It will make you so much happier. Or at least turn them off, build up enough temples, then turn them on.

- Build lots of prefectures and engineering posts, and make sure they are the first things you build when building homes/neighborhoods or sections of town that feel just a little far away from your main town.
- Try to set up trade goods soon as possible. Trading will give you money which helps in not pissing off Caeser, and he may even request that trade good you are producing and you'll already be ahead of the game on his request.
-I highly recommend slow, controlled growth. It is easy to get caught building way too many homes or way too few and have a city always dealing with high or low unemployment.
- Focus on water and food and making sure water is well distributed through your city or where you plan to build so your houses stay consistent, allowing you to introduce new goods to the populace and increase housing quality. Then you can kind of gauge how many workshops or how much of a certain resource you need to maintain high quality of life for this level of population.

All in all it is a great game, 9/10 for the genre, with some definite hair tugging irritations, but it is still really fun and has a lot of replayability, at least if you give it a few years and mix in some nostalgia! 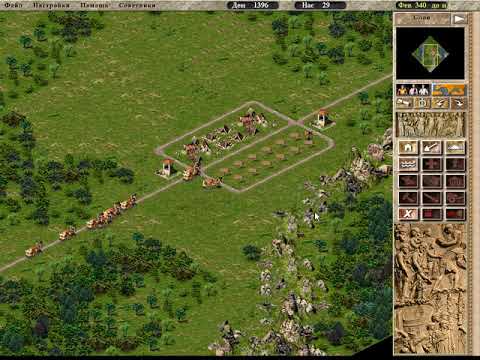 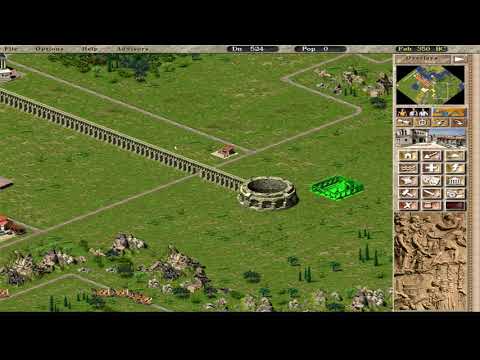 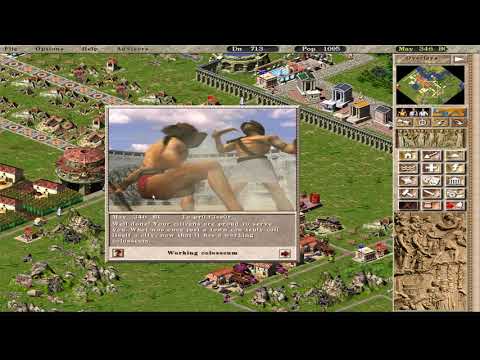 Chubby
View videos
i cant get the game to even start...
i have windows 10, i am not a computer expert, i need some help if anyone can help me play this game, I played it before long time ago and i liked it so much... (That was still on winXP or win7)
1

ExcitedLotus
Feb 24 @ 7:22am
General Discussions
Augustus is the single best thing to ever happen to this game
why isn't this pinned? https://github.com/Keriew/augustus
10

Gandalf
Mar 3 @ 6:02am
General Discussions
Too funky colours for me...
Hi everyone. Upon launch, the initial launchscreen is ok, but everything else after that is dressed in orange, pink and green colours. It happened after I tried to alter the display settings - any clues how to get the original colours back? (The games runs smoothly, its just the colous that are completely off)...
4

diemerix
Feb 23 @ 3:22pm
General Discussions
No one has rated this review as helpful yet