Store Page
View Stats:
Global Achievements
Show
All News
All News
Syndicated News
Official Announcements
Multimultiplayer Update!
May 30, 2017
We've just made a new version of Powargrid available on Steam, with a couple of features that were requested by players. Let's dive straight into what's new.

Eight person multiplayer
The AI in Powargrid has been called intelligent and even devilish. But since humans are much better than the AI at taunting, throwing insults, gloating and being sore losers, the real fun for many players is to play against - and try to defeat - a human opponent.

To multiply this fun, we've added multiplayer matches with more than two players. Hence the multimultiplayer update - we couldn't find a real word to use :). You can now host multiplayer games for up to eight people. You can choose whether to fight in teams or go for free for all mayhem. 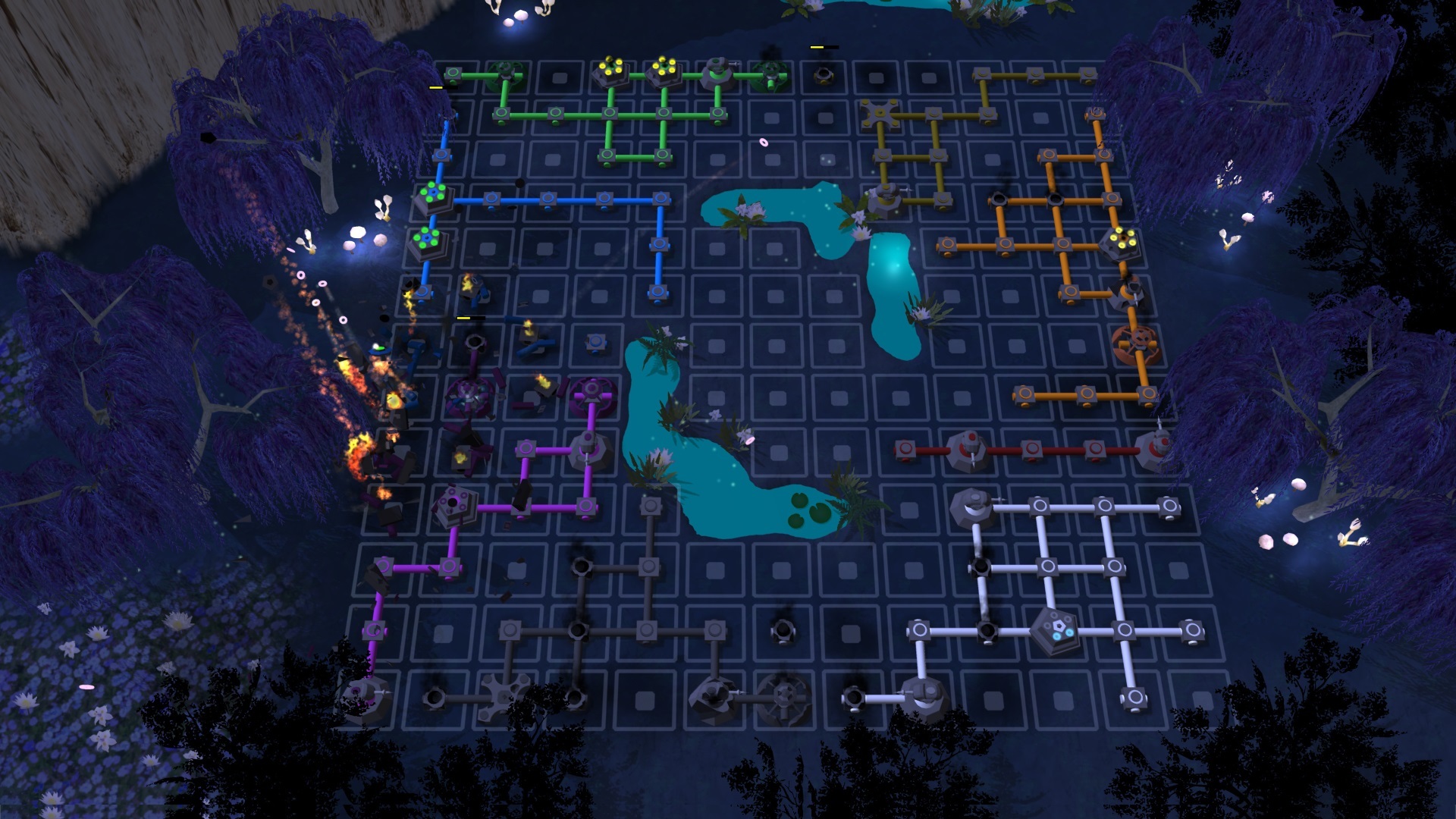 New skirmish map
As you can see, we've also added a new map, Marsh to War, which can be used for both skirmish and (multi)multiplayer matches. The gameplay is quite different from the other maps and we hope you'll enjoy it. Marsh to War is playable with up to eight players.

Existing skirmish maps have also been upgraded to support more players: up to 3 players on the Isle of Trial, and 8 players in the Pit of Grit and All Must Fall. 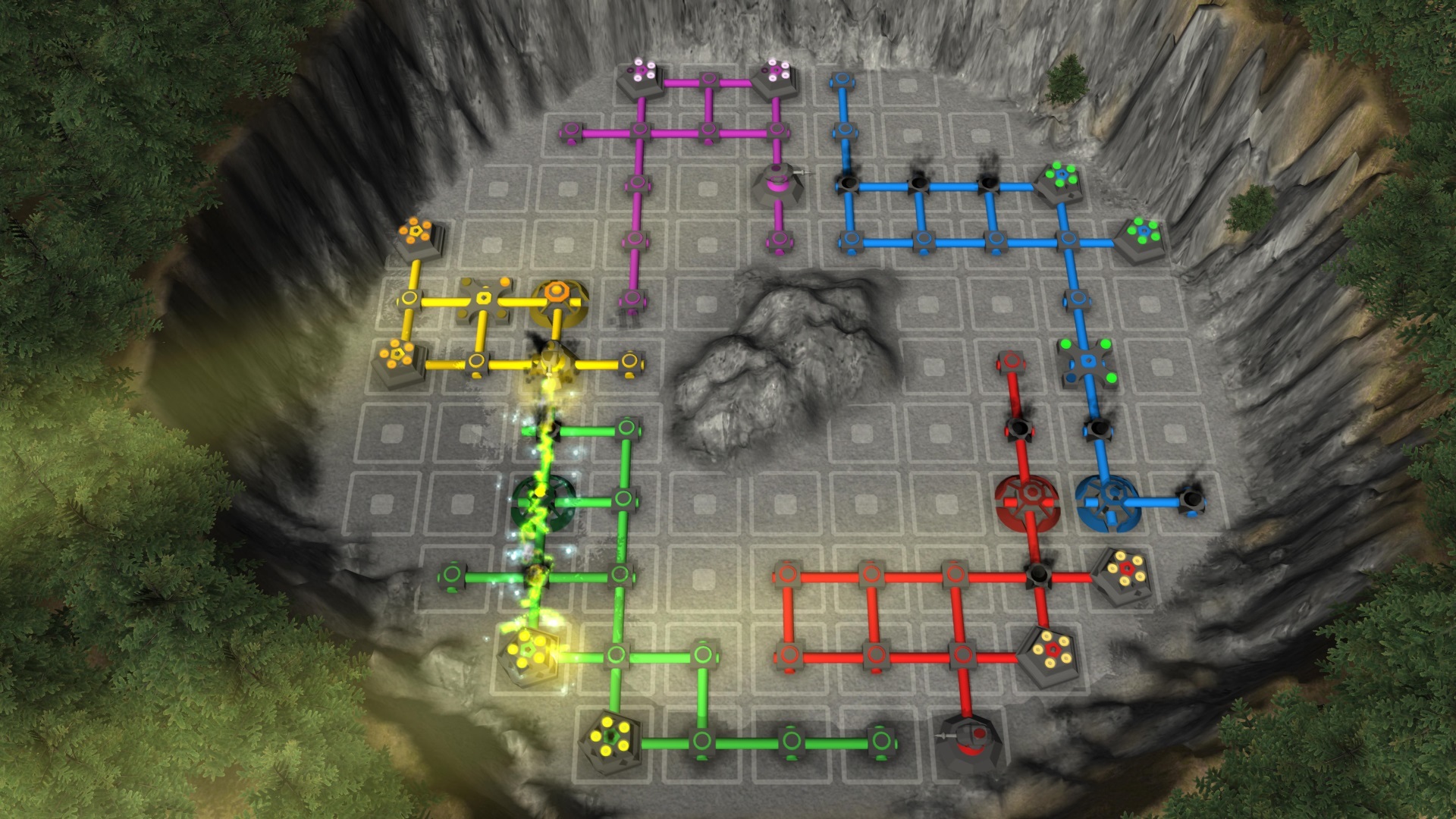 For every possible number of players, we've hand picked the starting positions to make for as fair a fight as possible.

Powargrid demo
Along with the update, we're also releasing a demo version, with the first five missions of the campaign. While we (of course) hope to reach new players with the demo, we also had existing players in mind. With the demo, you can join (but not host) multiplayer games. So if you own the full version of Powargrid, you can always play a (multi)multiplayer game with your friends, even if they only have the demo. 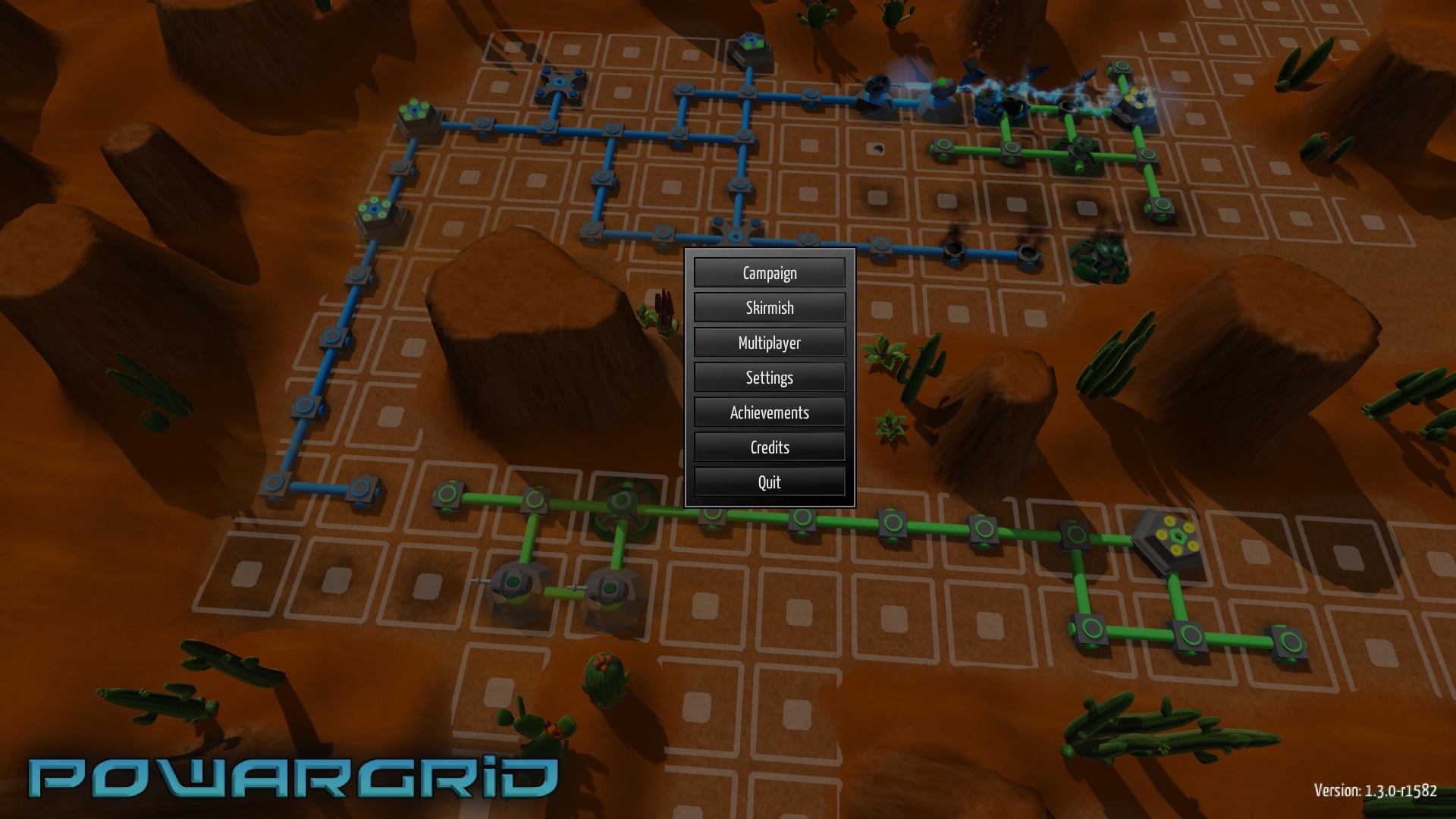 Other than that, we've made minor improvements, from bug fixes to some visual changes, including a new main menu scene. We hope you'll enjoy this update and we'd love to hear what you think of it!

Powargrid
8
6
Difficulty tweaks
Oct 18, 2016
Based on feedback on the forum, we just released some tweaks to the mission difficulty settings. Especially near the end of the campaign, even on easy some missions were still pretty rough. The changes mostly involve improving the player's starting position and/or removing some of the opponent's pieces. 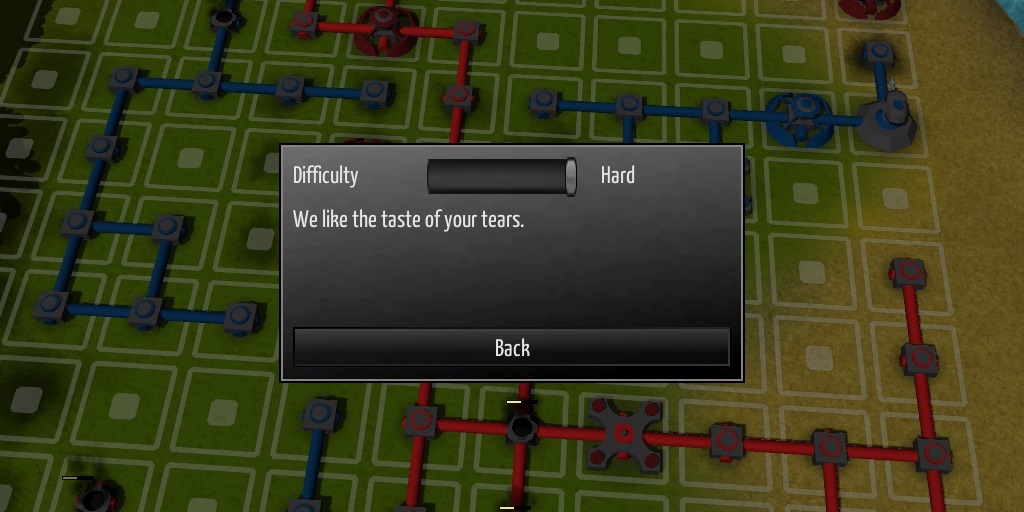 So in short: mash Escape to continue ;) 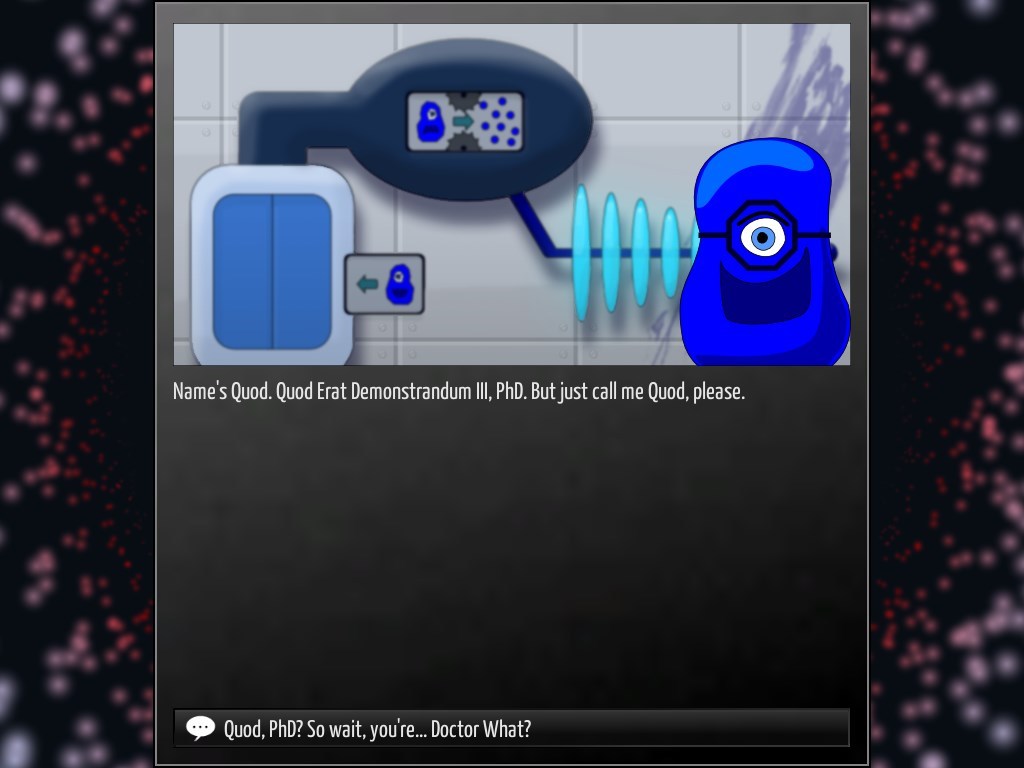 Before you ask: we know some people have a bit of a tough time in "Attack of the Killer Volcano", so we looked into speeding up the intro there, but because it's animated using the physics engine, we can't speed it up without the simulation going all nuts. You'll have to sit through that one, I'm afraid.

Powargrid
4
0
Update: more UI for less mathing
Oct 7, 2016
Quick! How much is 3 times 28? Or in Powargrid terms: do you have enough juice to double charge this tower?

We realized, again as we were watching people play our game, that we make you do a lot of mental math. Now, Powargrid is not supposed to be easy, but it's definitely not meant to be a chore! Last time I heard, computers were pretty good at math, so let us help you out by having them do some for you :) 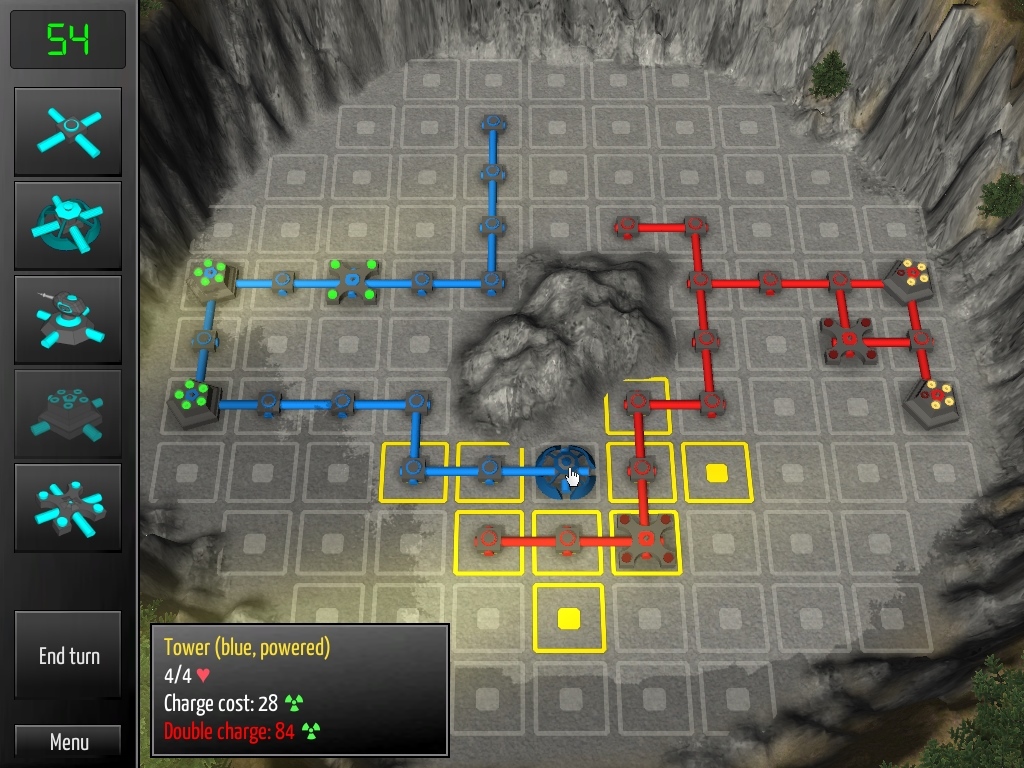 Yep, the tool tip now tells you how much a double charge will cost, and it'll light up in red if you don't have enough. You're welcome, and sorry it took this long!

Powargrid
3
1
User interface improvement
Oct 6, 2016
Hi, Michiel here! After watching a few videos of people playing Powargrid, I noticed that they were often looking for a place they could place a certain building, moving the mouse around until they found a good spot where they could afford to build it. I've been working on this game so long, I mostly just know without even thinking about it -- so that was a good wakeup call that something could be improved there.

I'm now trying out a little visual aid, by highlighting the tiles you can build on and "lowlighting" (is that a word? de-emphasizing!) invalid tiles. 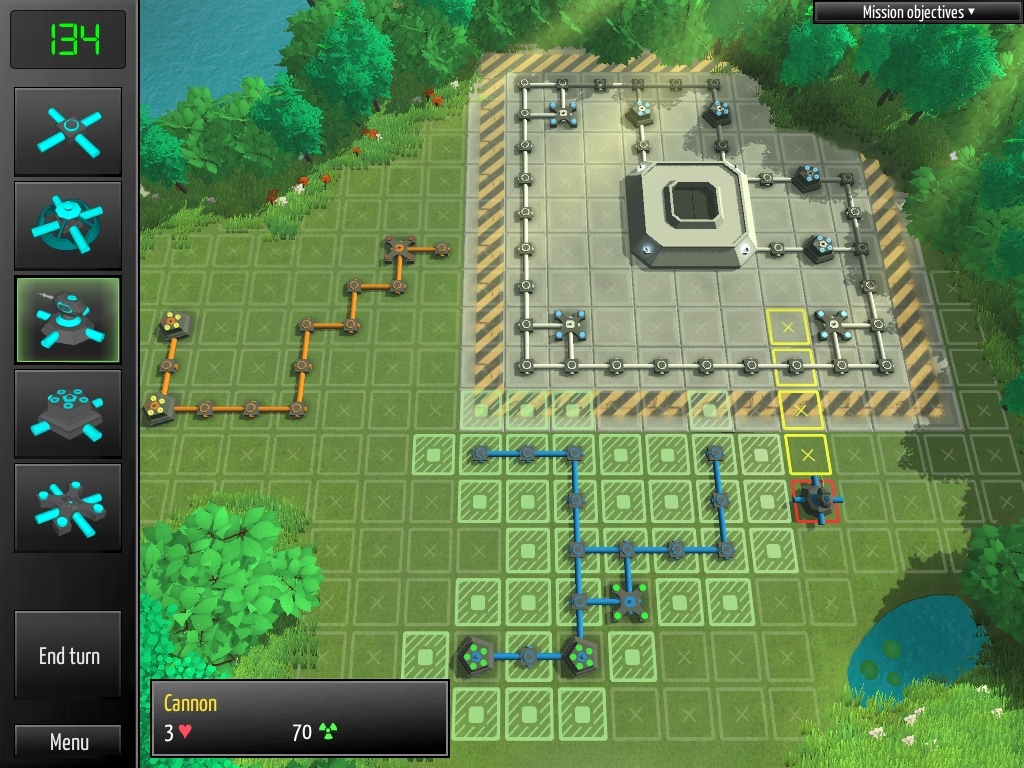 For me, it's REALLY weird to change anything to the core visuals after staring at them for years -- but I think this is going to be an improvement!

I've just set the new build live, so everyone should be receiving the new version shortly. Tell us what you think! 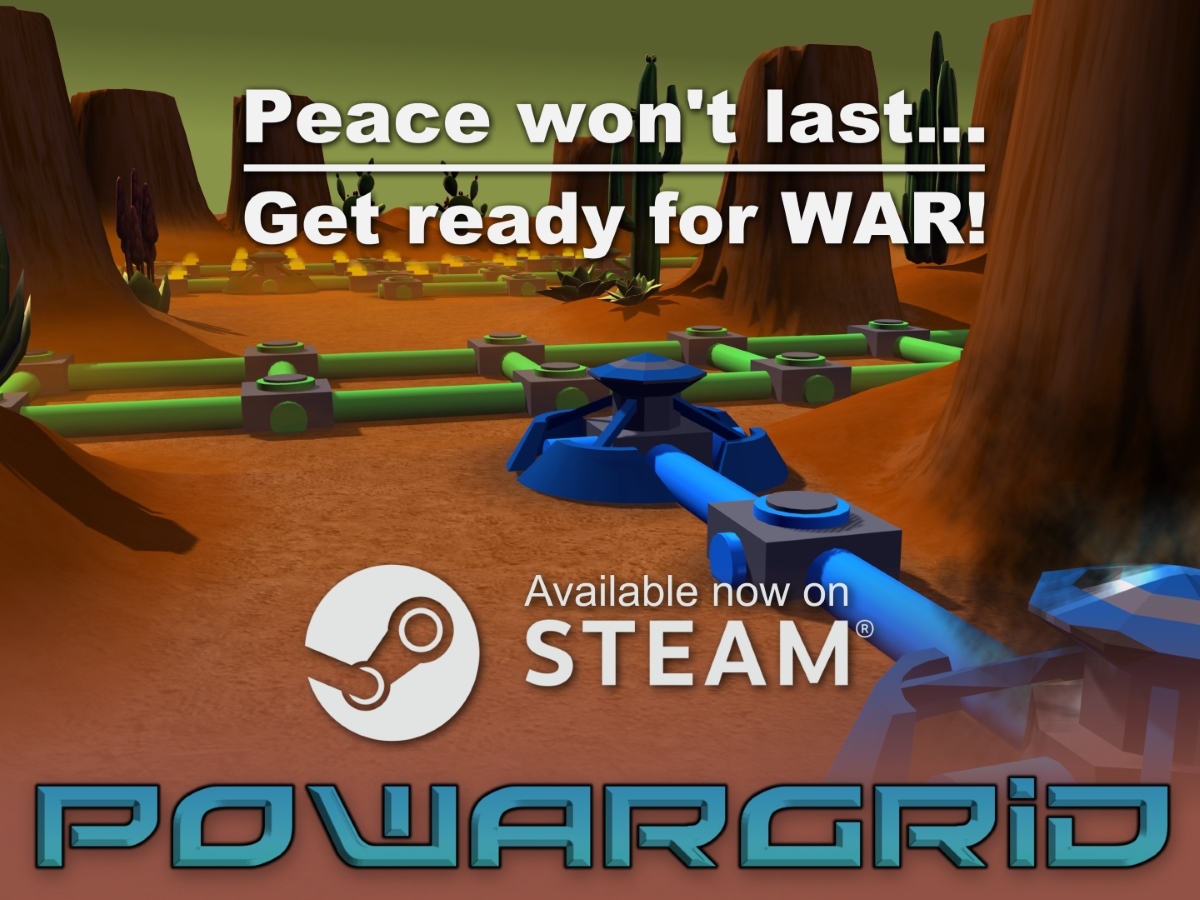 From today on you can play our explosive turn-based strategy game Powargrid! We're very excited, and the blobbies are getting restless...

In a world without war, the blobbies refuse to be pacified. They lust for power, literally and figuratively. Driven by old grudges, they use any means they have to continue waging war.

In this explosive turn-based strategy game, the blobbies vie for control over their world, repurposing immovable defenses to carry out devastating attacks and constructing power plants to fuel their war efforts. Only the best tacticians can hope to strike the right balance between attacking their opponent’s power plants and defending their own. And that’s not all….

Not satisfied with the way the blobbies wage war? Tinker with the AI and devise your own nefarious mastermind to set on your friends.

Fight the blobbies in the campaign mode, pick your opponents in Skirmish battles and challenge human opponents.

In their quest for world domination, they’ve also found their way onto the internet. The blobbies try to sway minds with #TheDailyBlobbie, and now they multiply every hour with the
Blobbie Meme Maker![www.powargrid.com]

Powargrid
2
0
We're live!
Oct 5, 2016
Today's the day, the time is now! We just hit the button and Powargrid is now available on Steam! 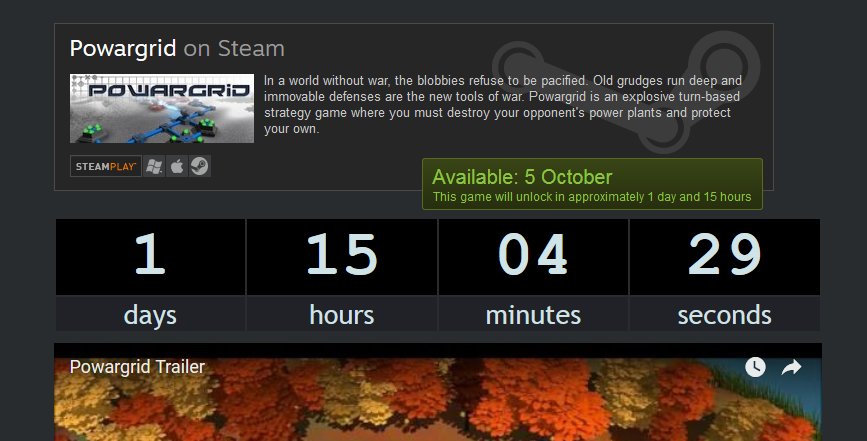 Powargrid
3
0
Release date: October 5!
Sep 6, 2016
We have a release date! Powargrid will be available on Steam on the 5th of October. So, be sure to add Powargrid to your wishlist and mark the date on your calendar!

We're currently sending out invites to our testers, and we're already working on the first feedback and bug reports.

We can use a few more beta testers, by the way - if you're interested, leave your email address at www.powargrid.com/beta-signup and we'll be in touch!