Wage war against players around the world with an unstoppable arsenal of powerful armored combat vehicles. Use 100+ vehicles to engage in furious PvP tank combat, complete co-op missions, and crush your enemies on breathtaking maps, from scorching deserts to neon-drenched urban jungles.
Visit the Store Page
Most popular community and official content for the past week.  (?)
Historical Skins – M60A3 SLEP Rough Rider
1:04pm
Commanders!

The upcoming Riders on the Storm event is bringing not only the M60A3 SLEP Tier 6 Premium MBT, but also a special Vietnam War-themed skin for it called Rough Rider. 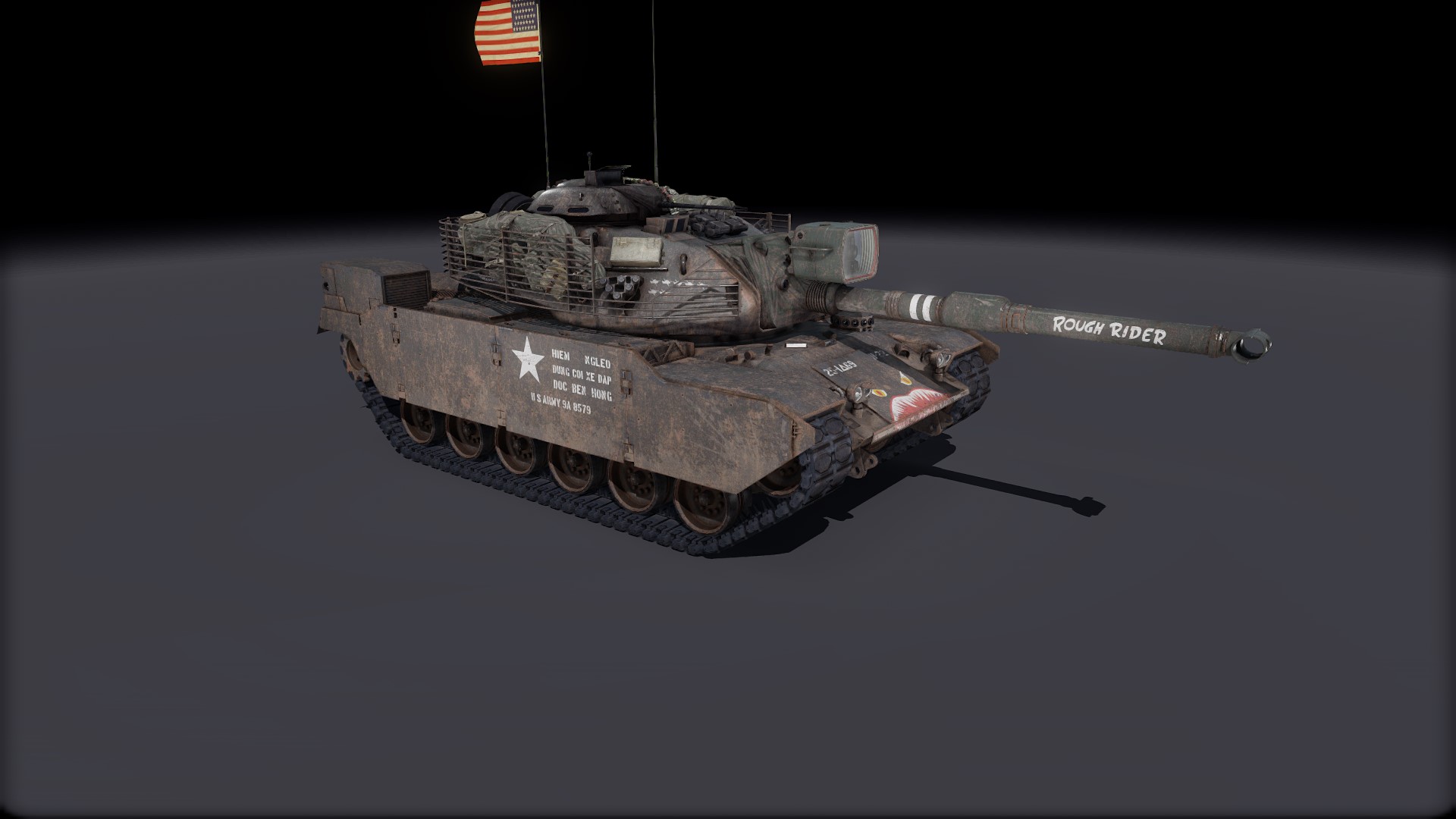 With this skin, we attempted to make the modern M60A3 SLEP look like an old M48 Patton series that was used extensively during the Vietnam War. Naturally, there are major visual differences to both vehicles but we tried to encapsulate the look as much as we could. In today’s article, we’ll walk you through the elements of this skin and where each of them came from. 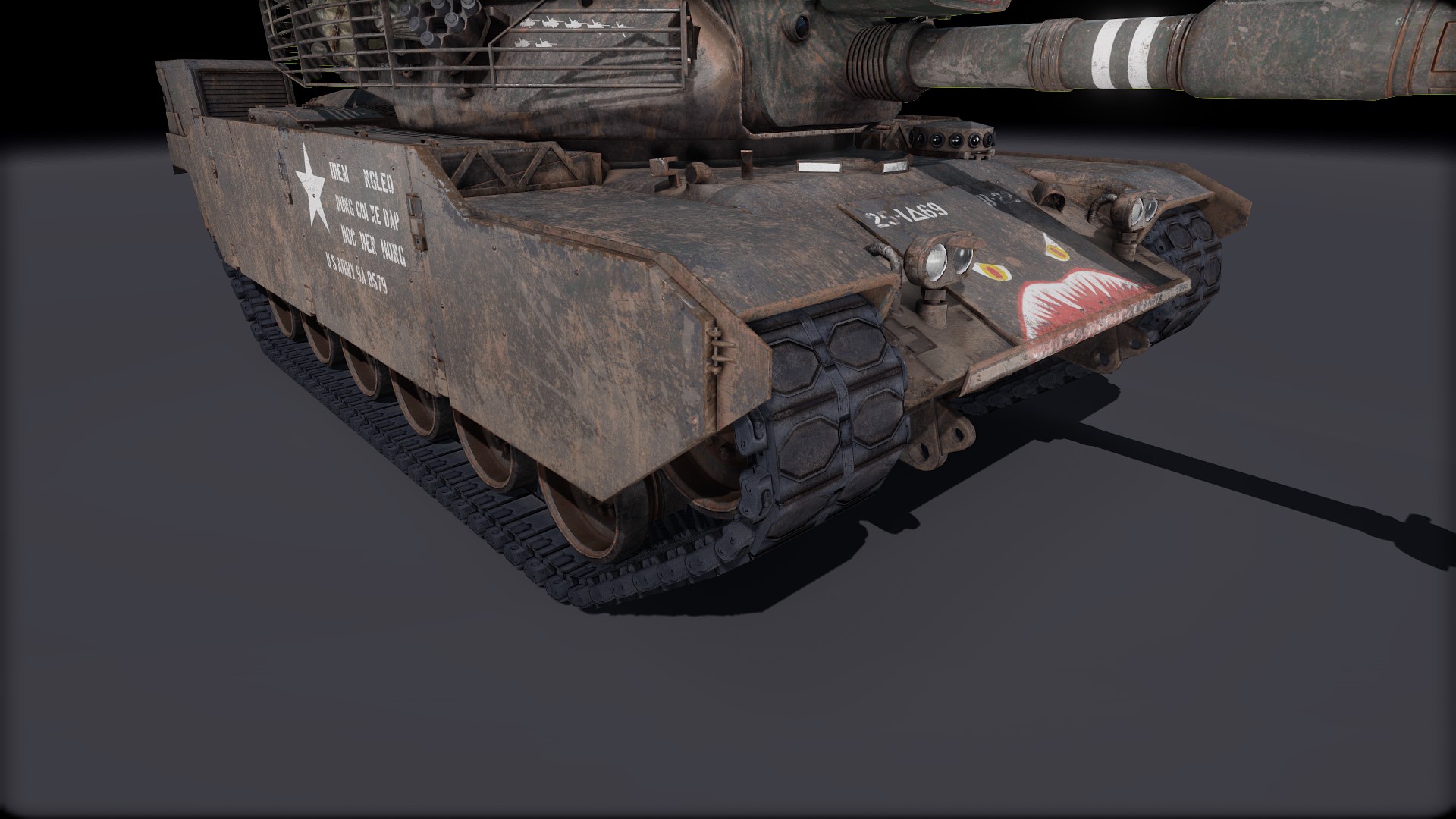 Let’s start with the color. As you already know from the Vietnam War camouflage article,[aw.my.games] most tanks of the era were painted in one shade of khaki/dark green. However, in the aggressive humid jungle environment of Vietnam, all colors wore out rather quickly and the vehicles changed color into a mixture of the original paint, rust and mud. This mixture is the basic color of the skin. 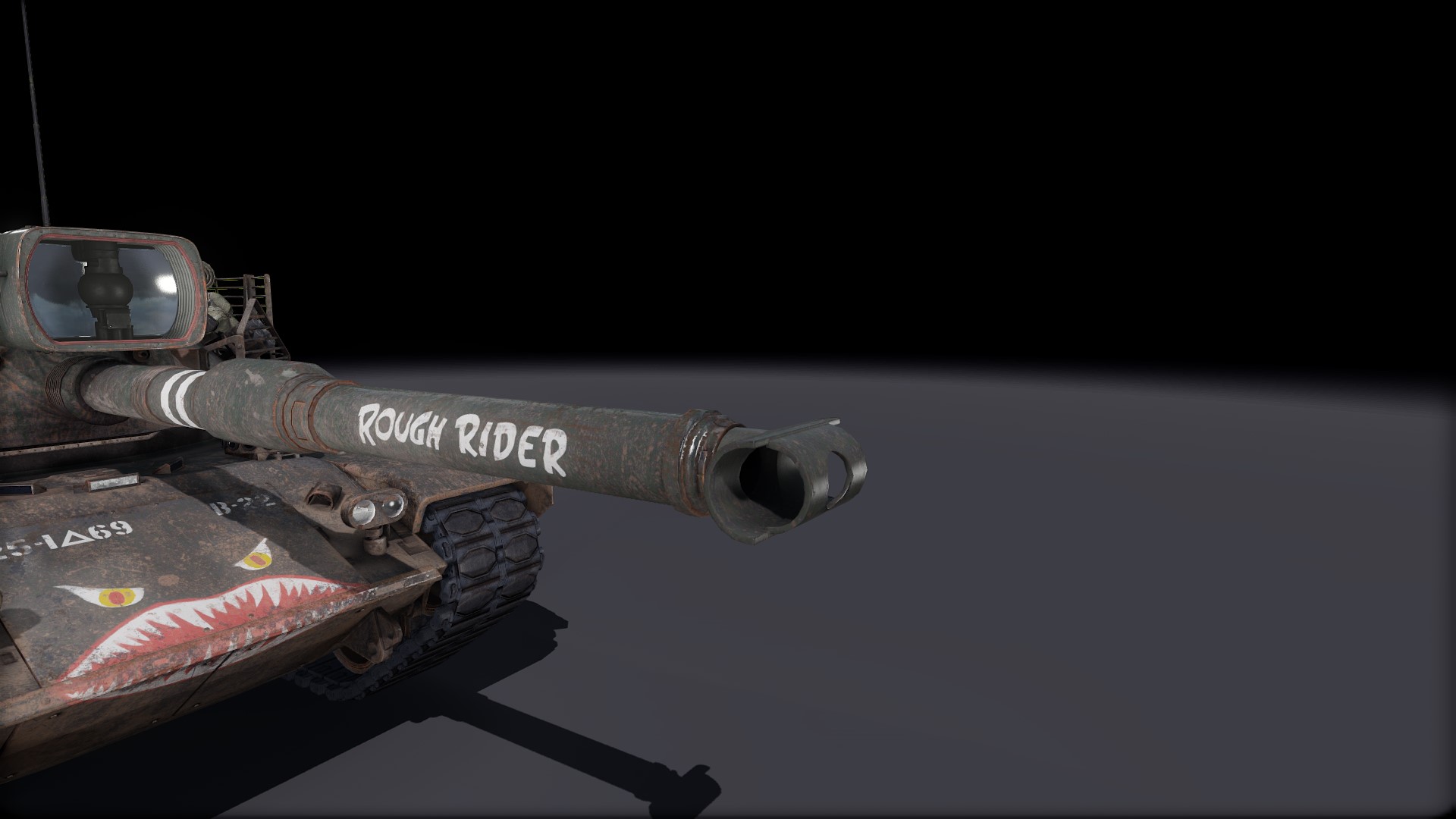 Taking a look at the gun next, you can see three distinctive parts on there. First is the muzzle brake, which the 120mm smoothbore definitely does not need, but we thought it to be a fine detail to add because one of the most iconic parts of the Vietnam era M48s was that T-shaped brake at the end of the barrel. Not to worry – the fake brake does not affect the performance of your shells in the slightest; it is there for visual reasons only.

Next, there’s the name itself – Rough Rider. The main part of the Vietnam War took place in the late 1960s and the early 1970s. The soldiers fighting in it grew up in the 1940s and the 1950s, the era of swing, Hollywood pin-up girls and, of course, old western movies. The name Rough Rider is a reference to a series of classic movies from the early 1940s about a band of heroic cowboys chasing down rustlers and other criminals in the Old West.

Even though this particular name didn’t appear on an actual Vietnam War tank, other references to the era have and naming a tank after a movie the commander would know from his childhood would be realistic. 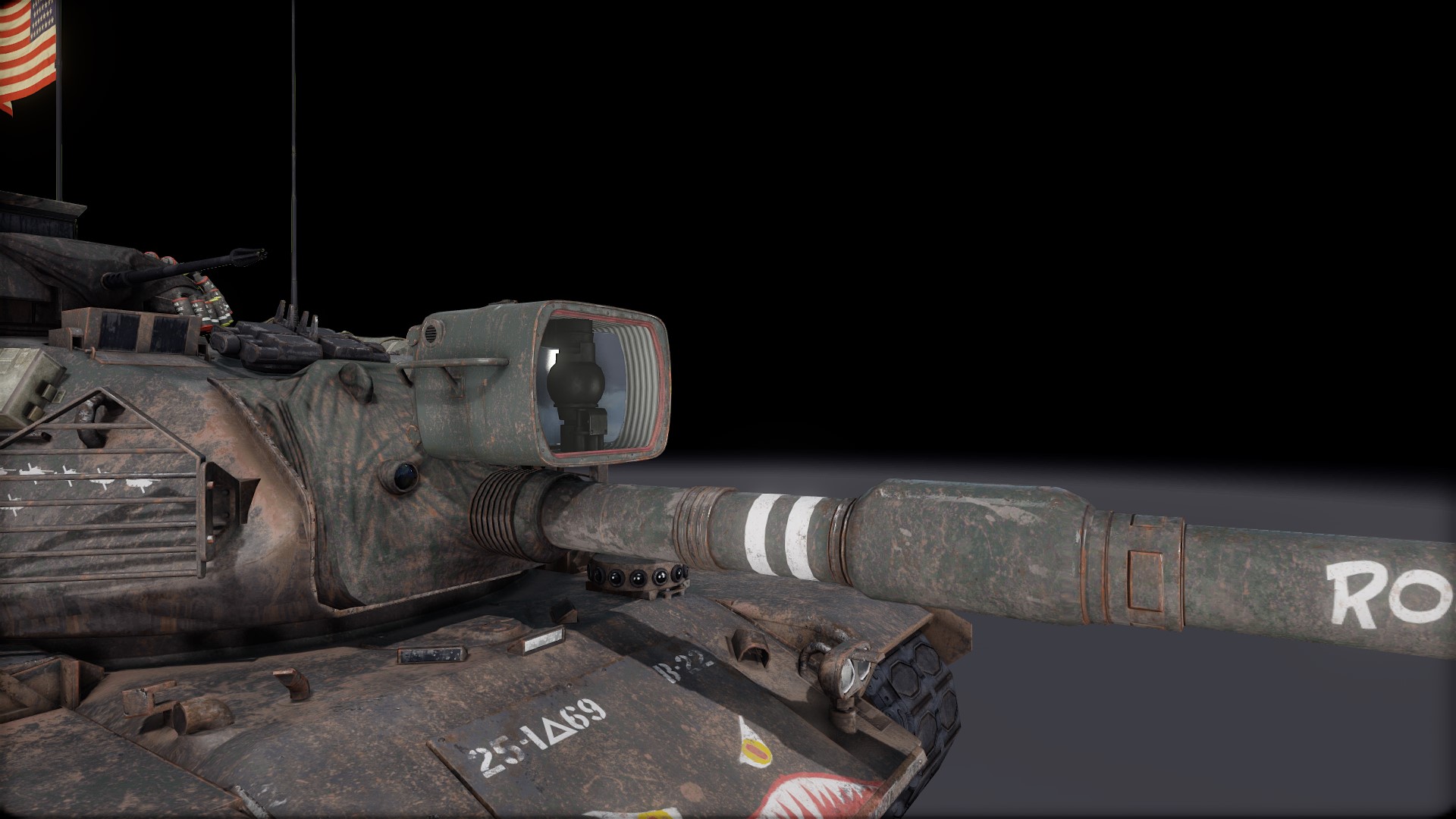 Moving up the barrel, you can see two white circles around it. This does not indicate kills, mind you. Two white circles in general meant that the tank in question belonged to Company B of the unit it was used by. 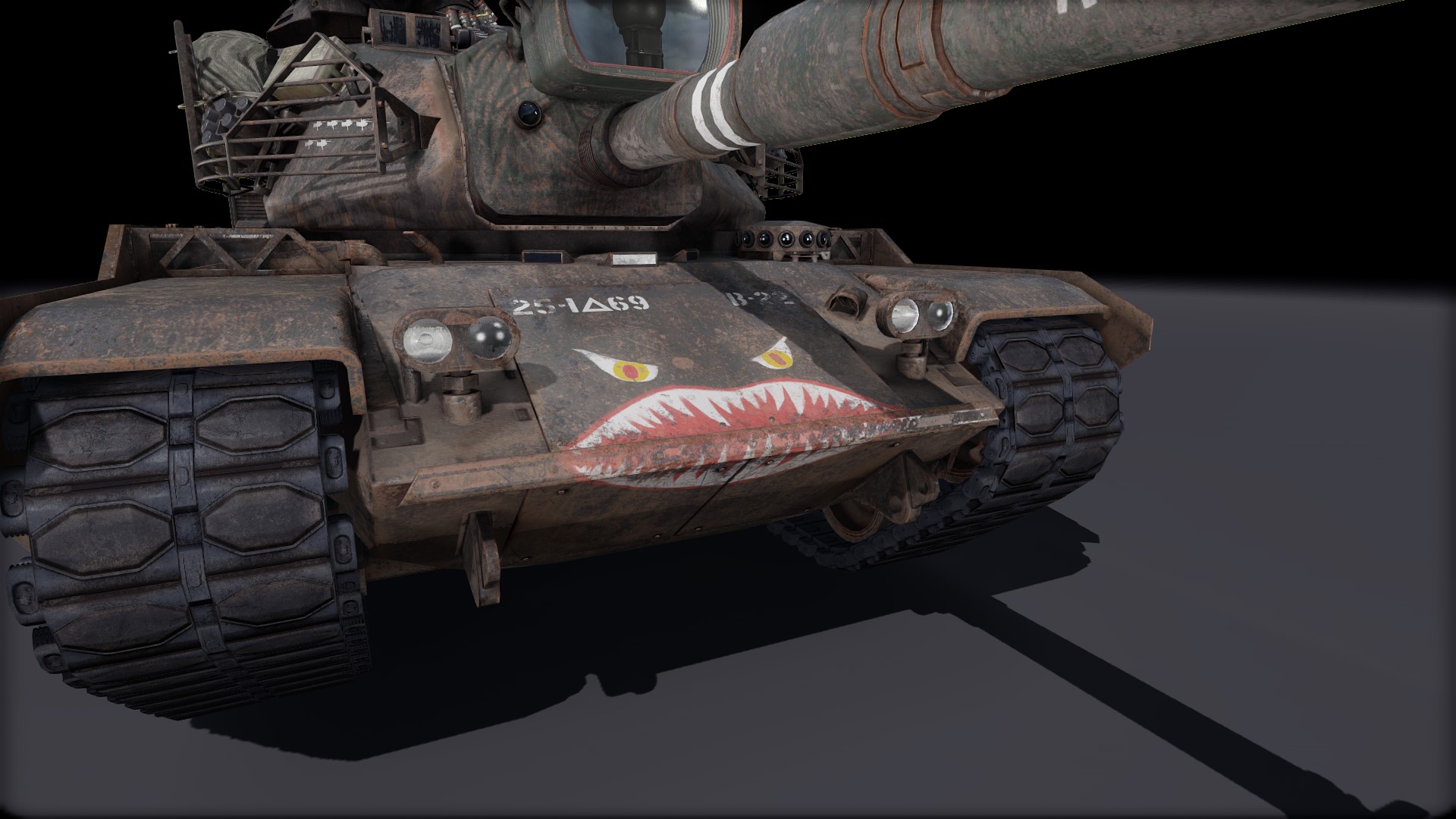 This matches the identification numbers on the upper frontal plate. The designation 25-I (triangle) 69 indicates that the vehicle belongs to the 1st Battalion, 69th Armor Regiment of the 25th Armored Division.

The 69th Armor Regiment (bearing the name “Black Panther”) was founded in 1940 and (under a different designation) served in Europe during the Second World War, from the Normandy Landings over Bastogne (the Battle of the Bulge) all the way to Leipzig, having participated in no fewer than five major battles. The unit was deactivated after the war, only to reappear a decade later as a part of the new regimental system. The unit was deployed to Vietnam in 1966 and participated in numerous actions, including the only tank versus tank battle of the Vietnam War from March 3, 1969, in which its Pattons destroyed two North-Vietnamese light tanks. Ending its tour of duty in 1970, the 69th Armor Regiment took part in 10 campaigns of the war with the B Company receiving a Presidential Unit Citation. The unit was disbanded in 1972, only to be reactivated once again in 1987 and eventually fighting in Operation Desert Storm and the Iraq War. 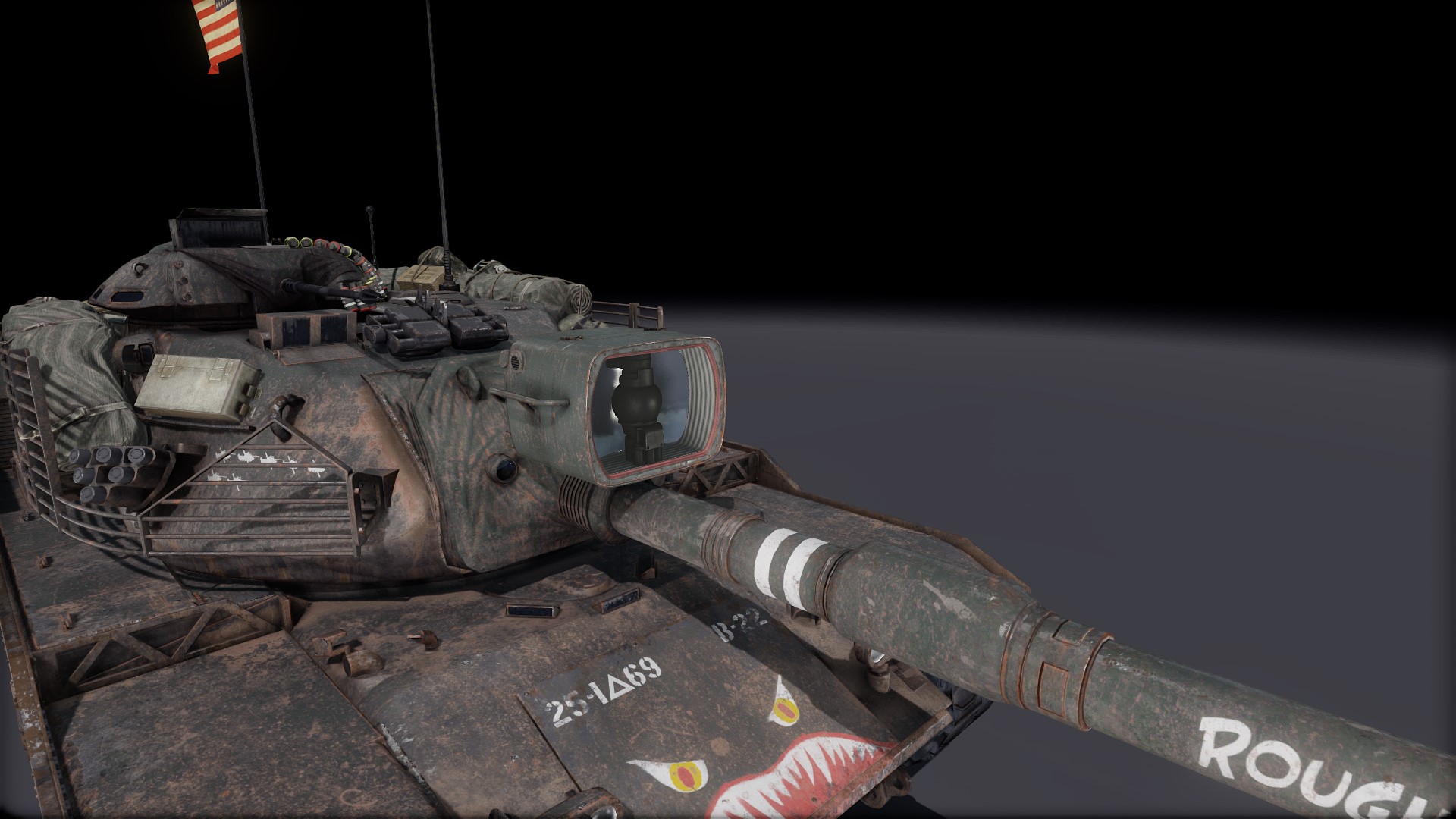 But enough of history, back to our skin. As you can see, we’ve added a massive searchlight above the gun, another distinctive feature of the Patton series of the era.

The teeth on the frontal hull are, however, not typical. They did appear on a specific Vietnam War era M48, but this kind of decoration wasn’t all that common back then. This seems to be a throwback to the Korean War, where decorating tanks with snarling maws was believed to bring fear to the hearts of superstitious Koreans. While the results of this tactics are debatable, one thing’s for sure. It does look badass.

The turret cage armor is filled with the crew’s personal effects as well as with those of the accompanying troops. The U.S. vehicles were frequently carrying such cargo around during prolonged sorties, as well as spare ammunition, food and other necessities. 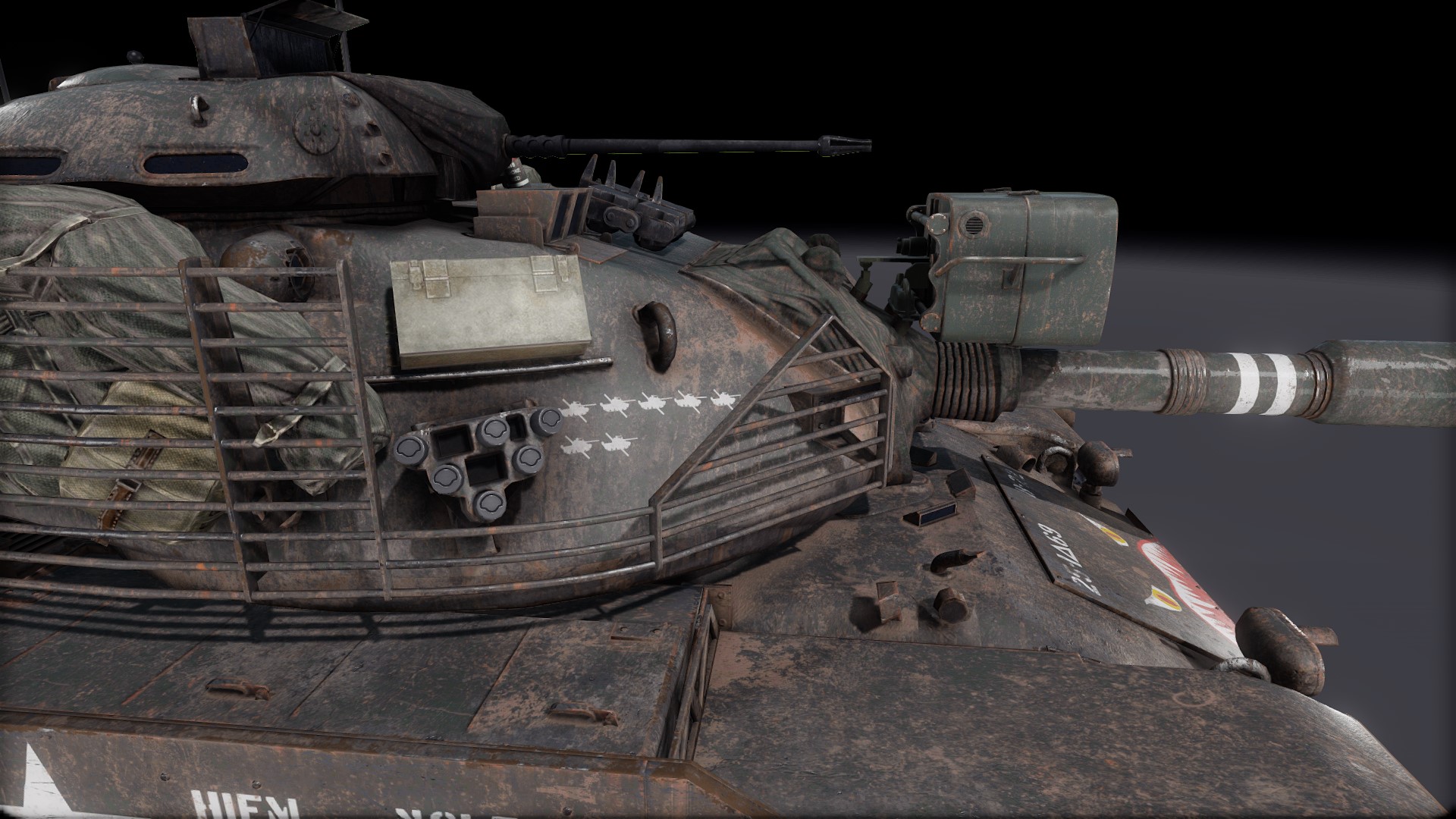 The right side of the turret has 7 crossed tank icons painted on it, indicating 7 tank kills. This part isn’t totally accurate either – as was written above, tank versus tank combat was very rare in the Vietnam War. In real life, the kills indicated on this spot were people, not vehicles – and there were many more than just 7. We thought this would be a bit gruesome, so we replaced the icons with tanks to better fit the world of Armored Warfare. 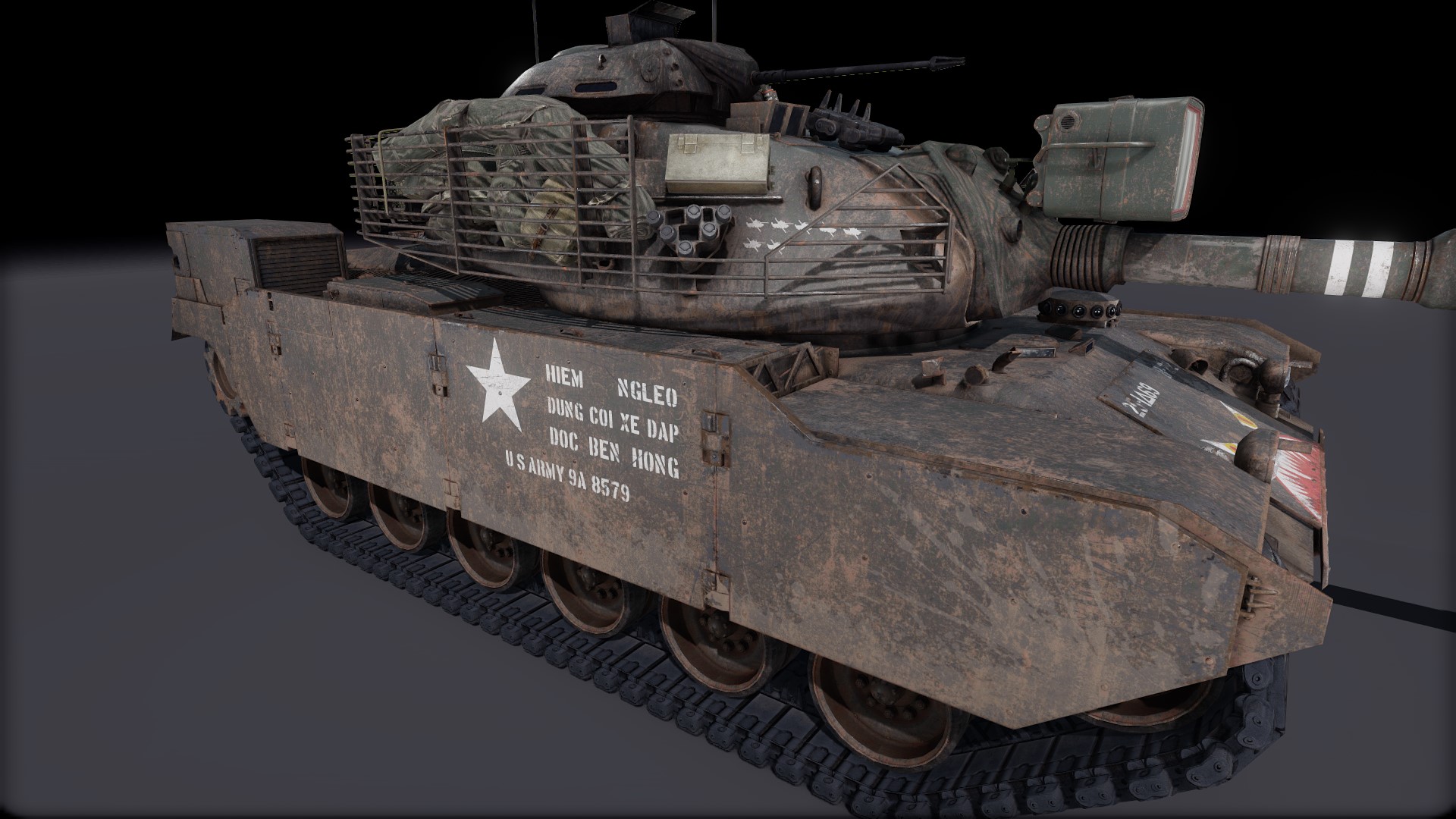 Staying on the right side, the hull bears three more distinctive marks. First is the white star the U.S. tanks bore. Second is the tank’s serial number. But the third one is more interesting – in Vietnamese, it says “pass on the right side of the vehicle.” Or at least it’s supposed to, the message was likely garbled and we copied it from the actual real life vehicle inscription. The purpose of this message was the safety of the crew. During various patrol and guard duties in cities, the tanks would frequently be attacked by insurgents hiding in the crowds. To make sure the guns were always aimed towards the correct side, the tank would be placed on the side of the road and anyone approaching it from the “blind” side would be treated as an enemy. 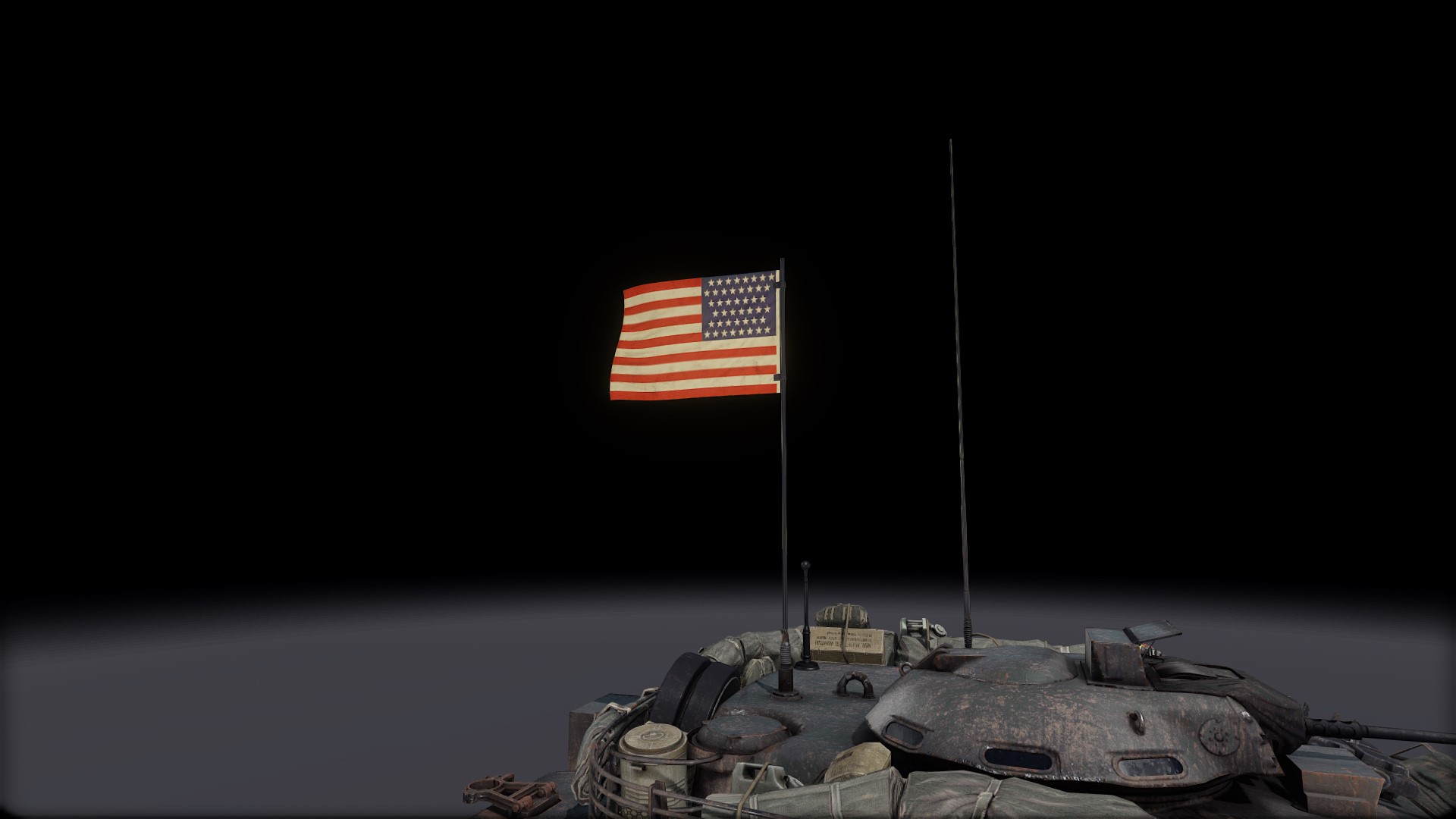 And, last but not least, there’s an American flag attached to one of the tank’s antennae. But watch out, because that’s no ordinary flag. It only bears 45 stars because it belonged to one of the legendary U.S. historical units, the 1st United States Volunteer Cavalry, also known as... “Rough Riders.” The unit was commanded by Theodore “Teddy” Roosevelt, an iconic figure of American history, and earned its fame during the Cuban campaign of 1898. The historical flag our banner is based on came from the Battle of San Juan Hill.

And that’s all there’s to be told about this skin. In case you like the banner in particular, it will also be available as a separate prize of the event along with four different titles:
Only the first title will, however, be available directly as a prize. The rest – you’ll see, but it wouldn’t be an anniversary event without an actual anniversary gift, wouldn’t it?

Either way, we hope that you’ll enjoy this skin as well as the other prizes and, as always:

Starting on September 27 (17:00), you’ll be able to earn a major bonus to your next Gold purchase (even a truly massive one, like 80 percent) by participating in the Scavenger Run event.

In other words, in case you win such a bonus and buy 1.000 Gold, you’ll receive 1.800 Gold instead. And that can make one hell of a difference (please note, however, that the maximum amount of bonus Gold obtainable this way is 10.000 Gold). 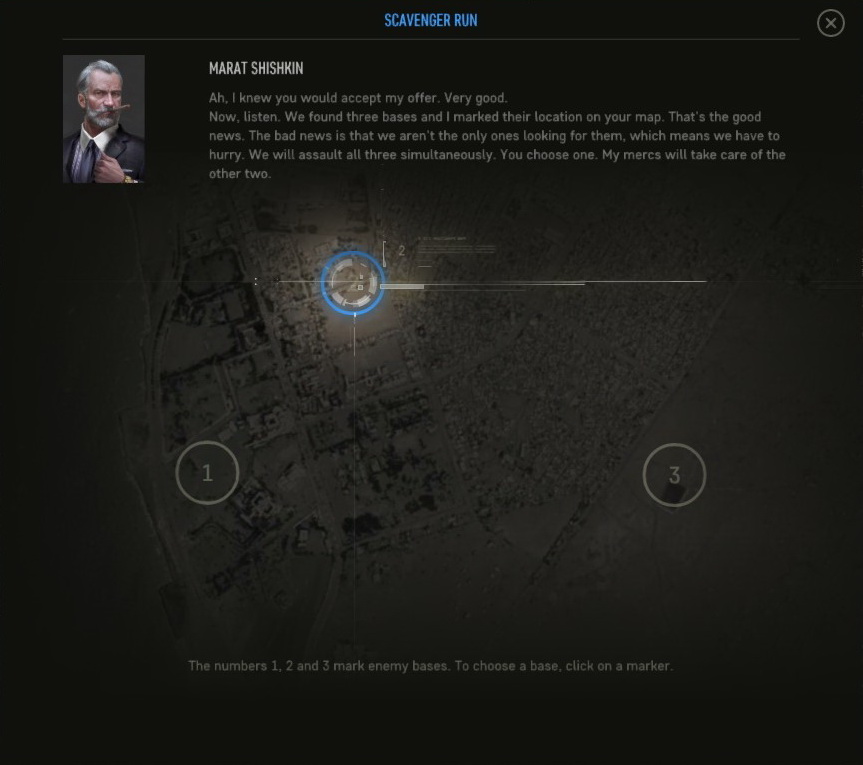 Scavenger Run is, in its core, a very simple event. There are many ruined and abandoned objects across the world of Armored Warfare and your friendly neighborhood arms dealer ran across one of them.

You are now being hired to scout it out. On a small map, you choose one of three bases and then scout its three warehouses by clicking on them. Depending on your finds (determined randomly), you will receive a sizeable bonus to your next Gold purchase. 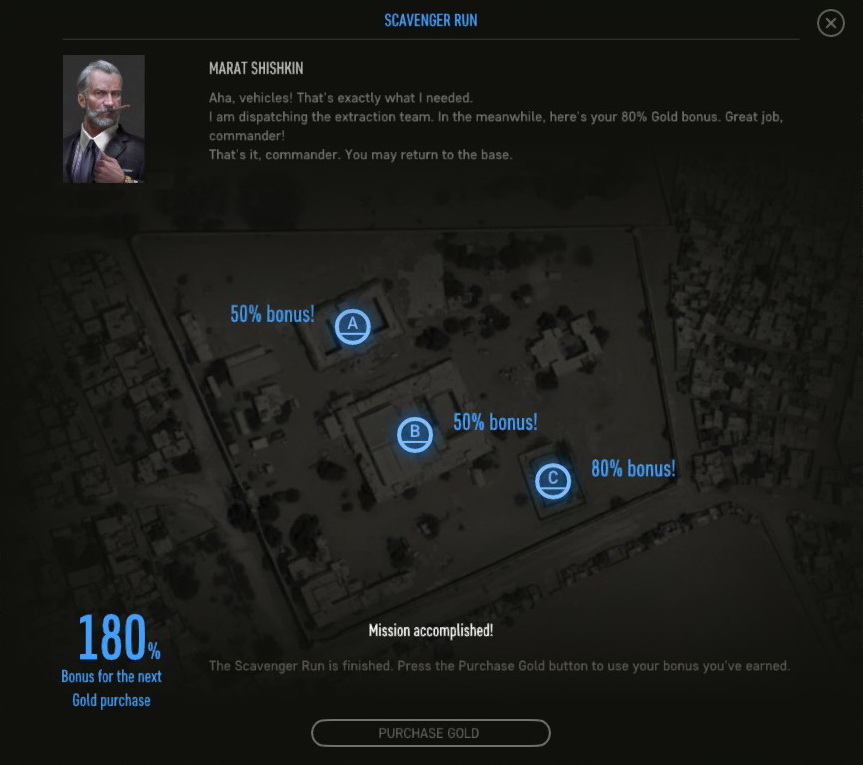 This event will be active for several days (the counter in Garage will always tell you how much time is left), so if you’re planning to stock on Gold for the next Battle Path or simply want to boost your progress right now, it’s the perfect opportunity to do so.

We hope that you’ll enjoy this new mechanic and, as always:

For today’s offer, we’ve prepared a series of Battle-Hardened bundles for three Russian progression MBTs, including the T-14 Armata. These discounted bundles contain Gold as well as the Battle-Hardened status, which will turn your Progression vehicle into a semi-Premium one by increasing its Credit income, Experience income, and by improving its matchmaking quality so that you meet lower Tier opponents in battle than usual, much like Premium vehicles do. 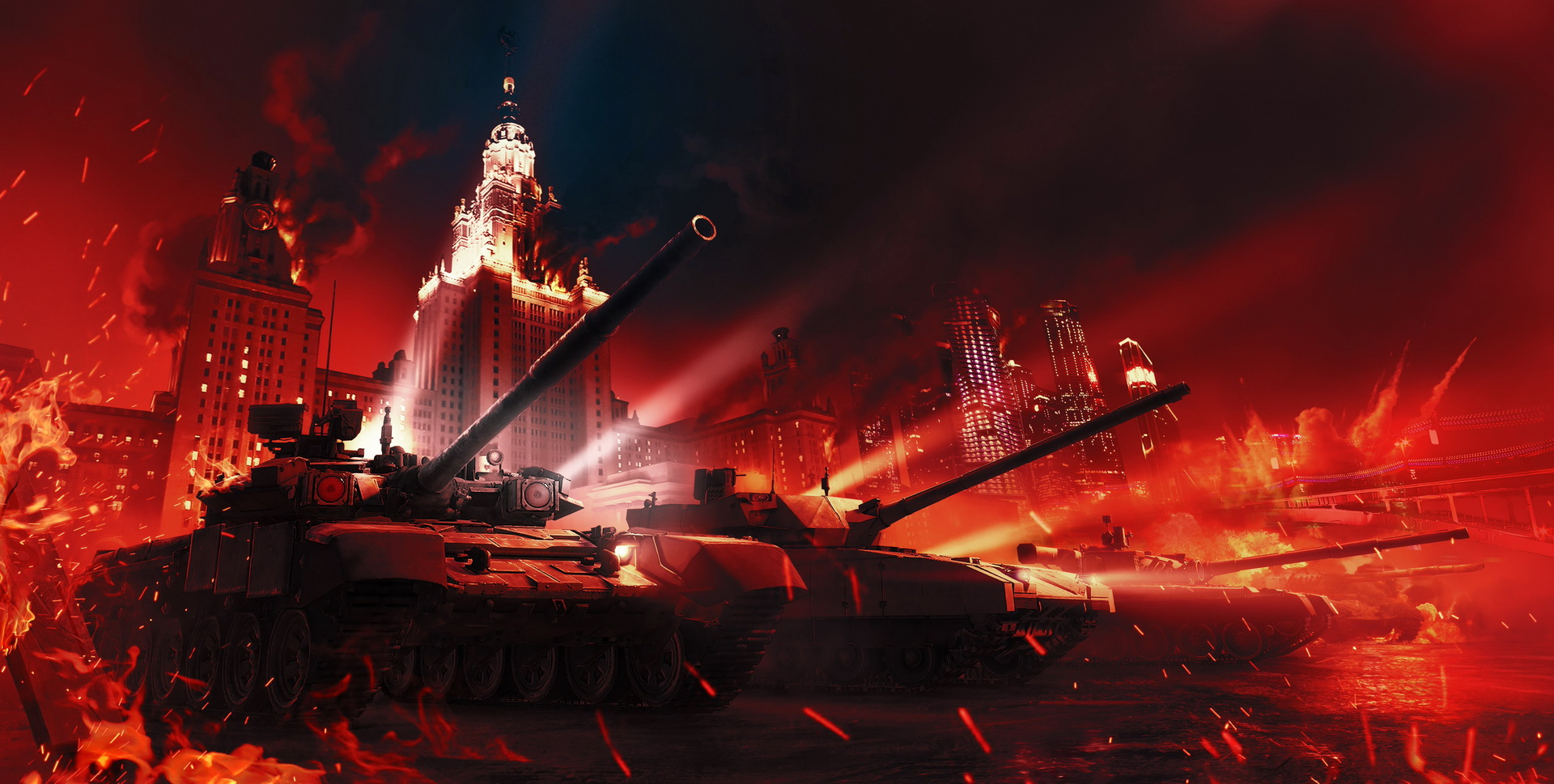 The discounted Battle-Hardened bundles are available for the following vehicles:
Please note that if you do not own the vehicle in question, you will receive the Battle Hardened status price in Gold instead.

[market.my.games]We hope that you will enjoy the offer and, as always: 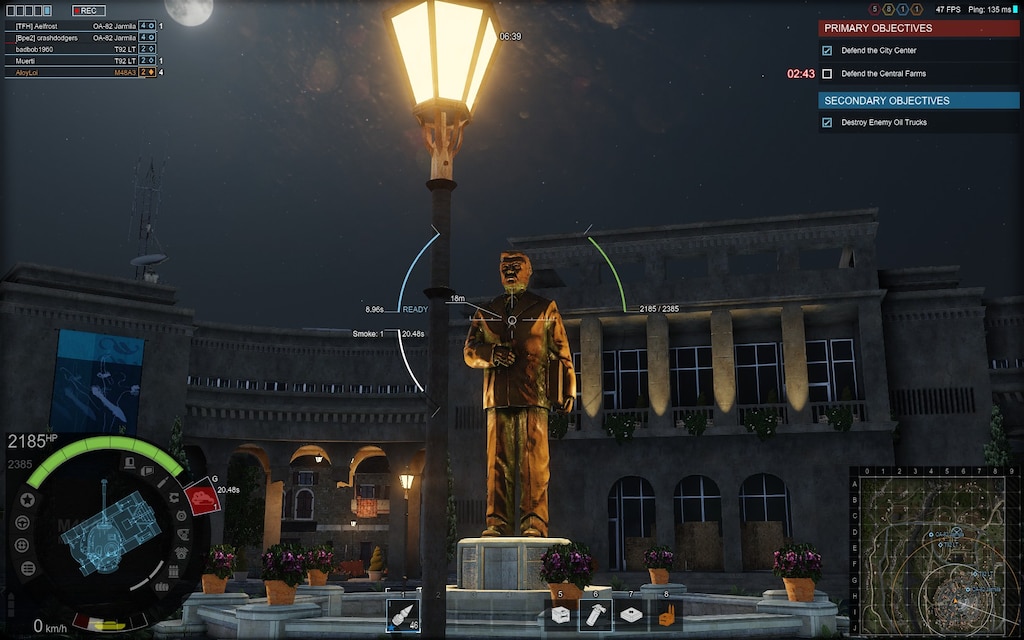 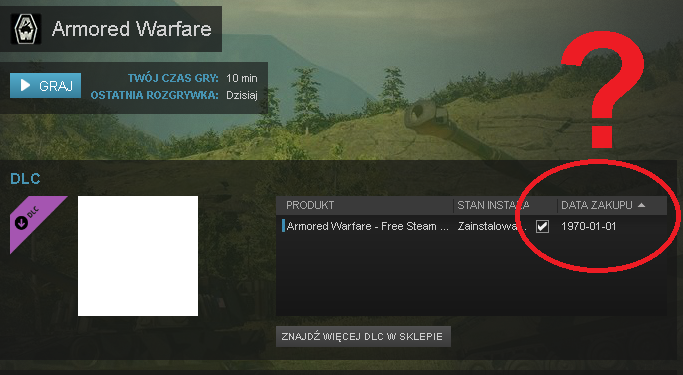 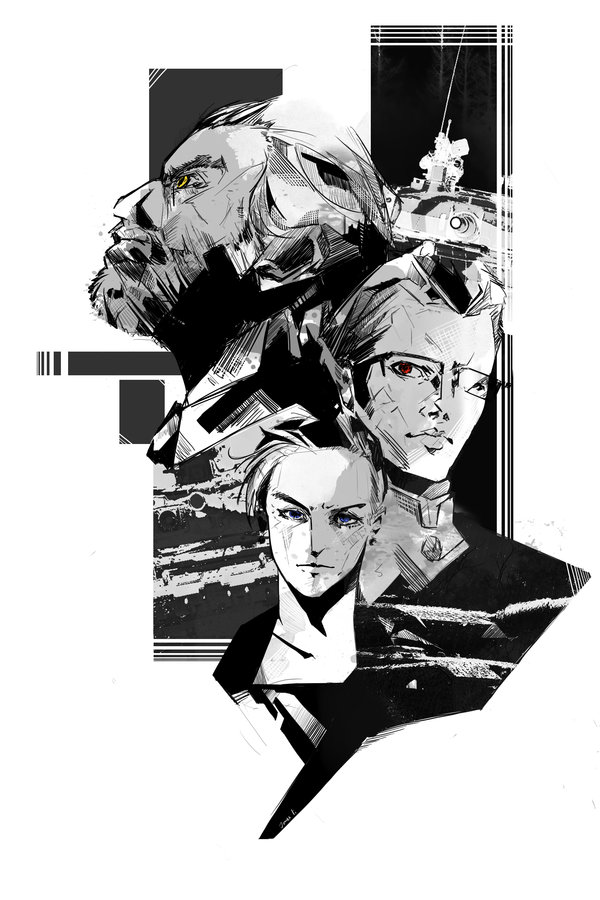 Armored Warfare Vehicle Comparison
This guide will provide basic information for newer players as well as a 'relatively accurate' spreadsheet detailing the statistics of tanks/vehicles in the game and allowing you to compare them to other tanks/vehicles of their tier and class. Some of thes... 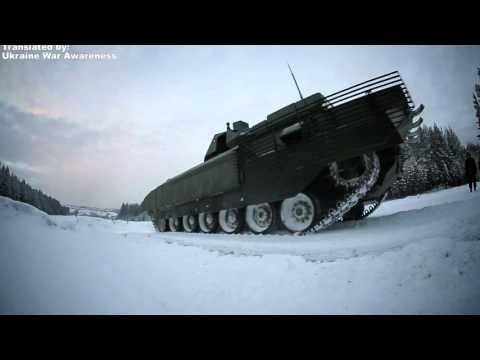 10 hints on improving your gaming satisfaction (PvP)
Some hints from experienced but casual PvP gamer on mindset that can help you get more from the game. 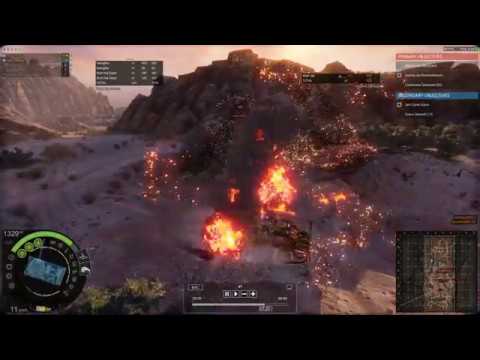 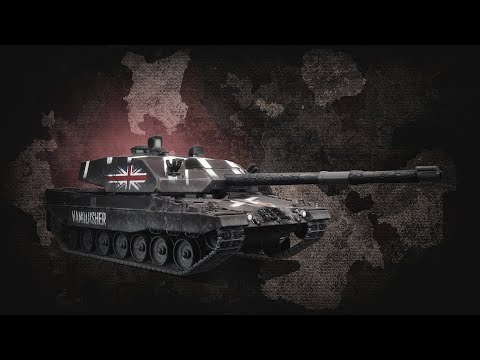 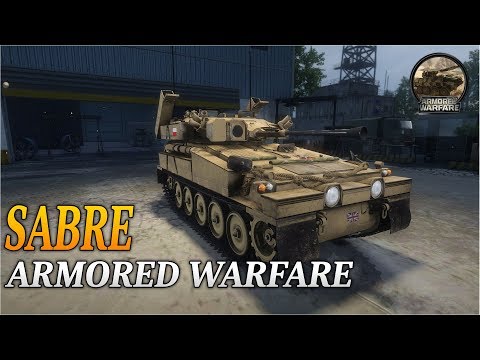 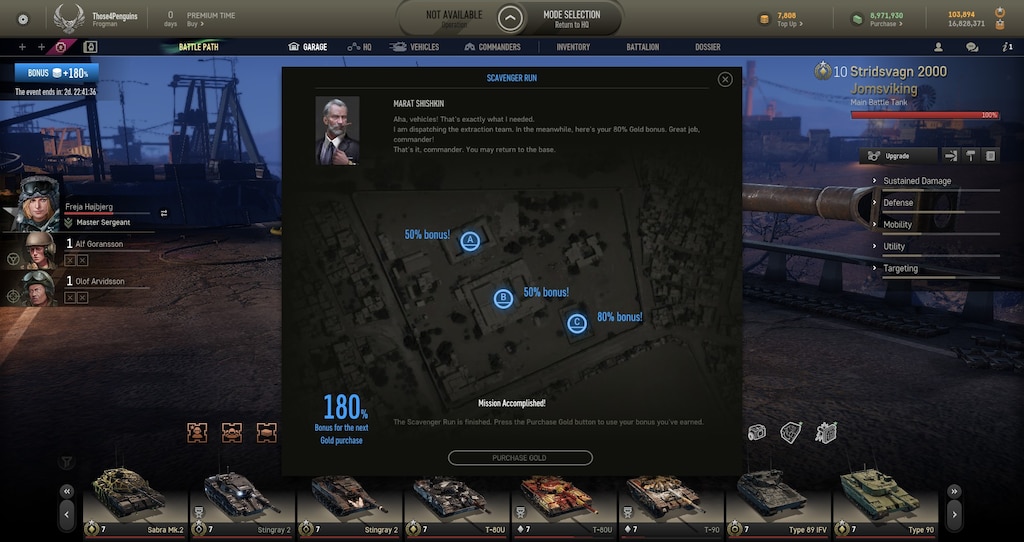 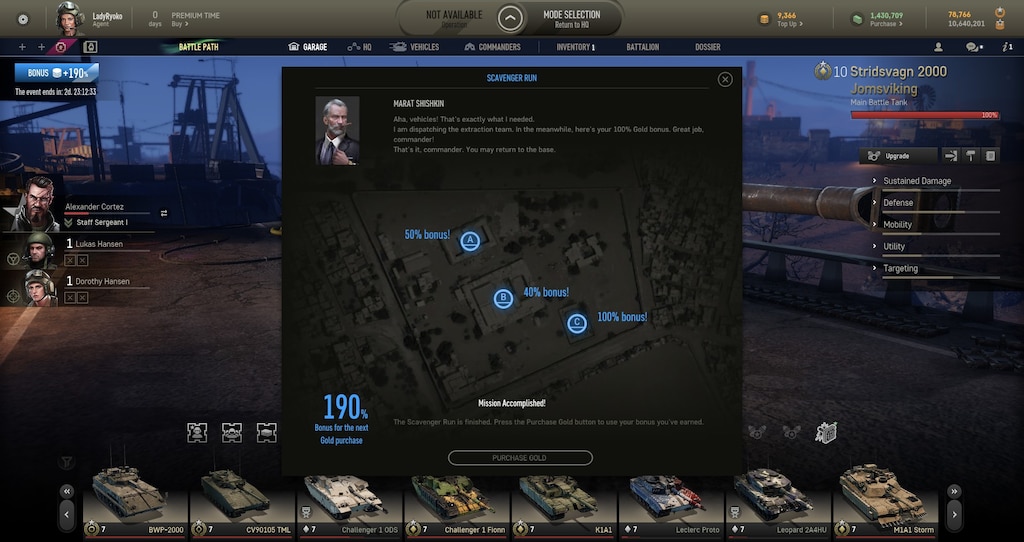 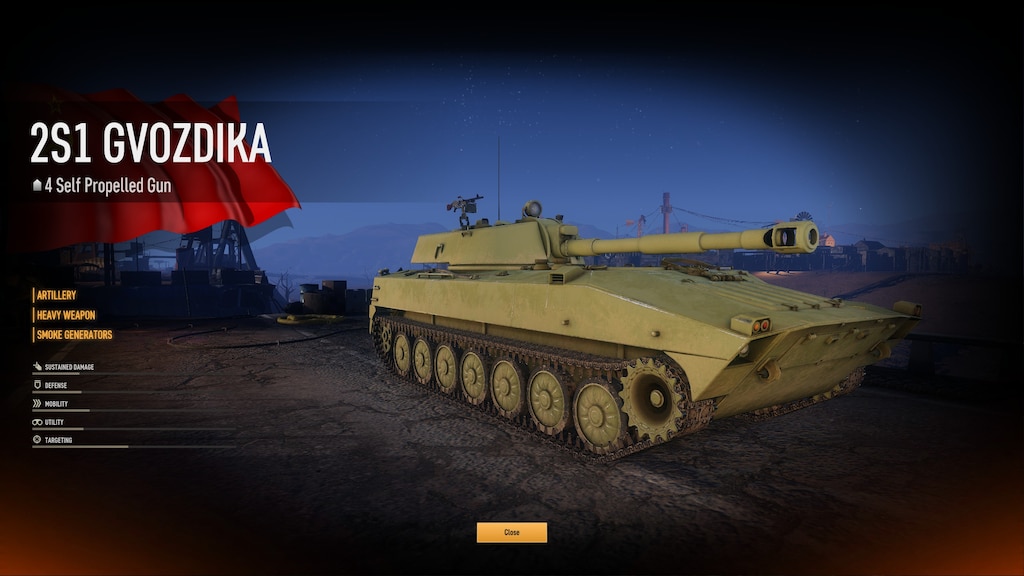 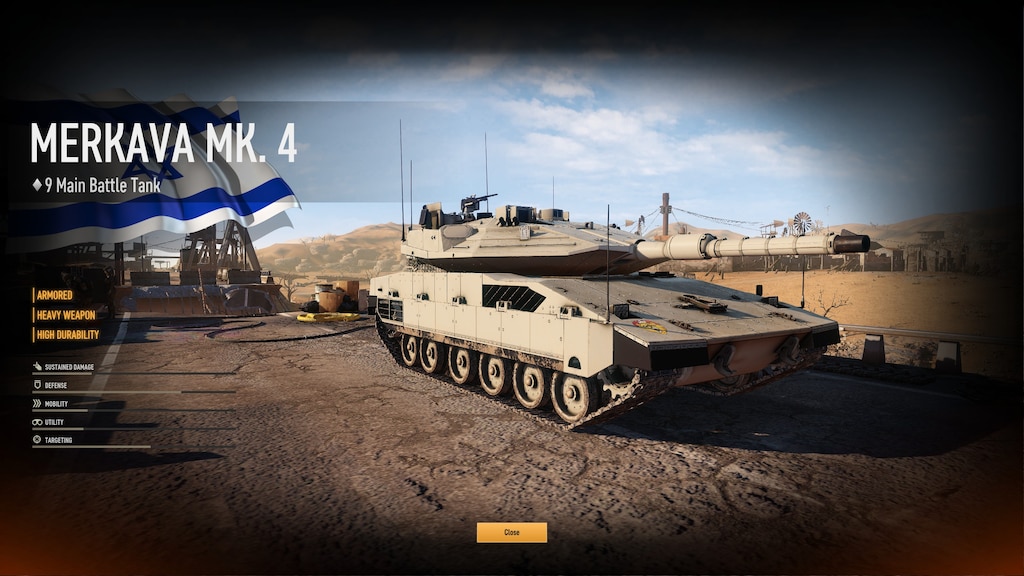 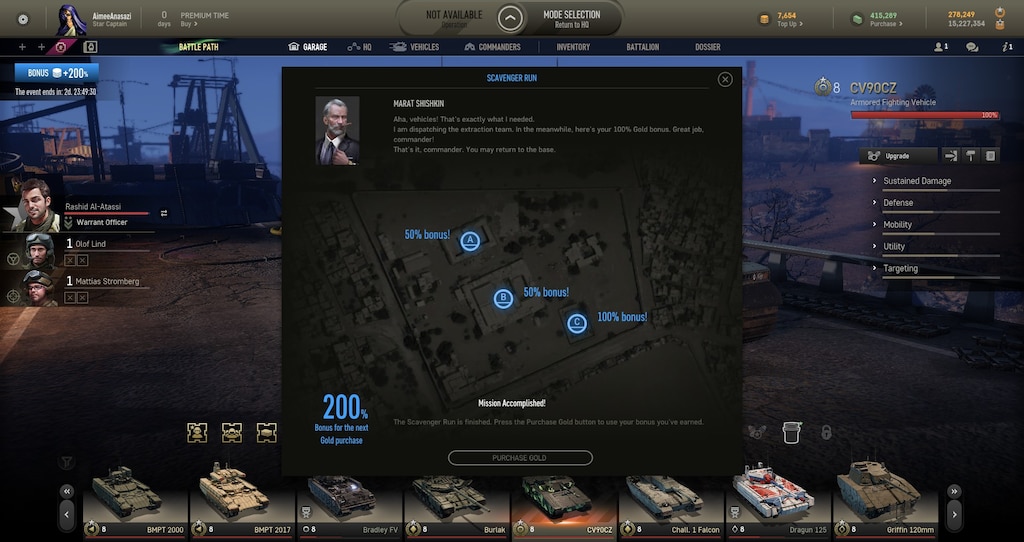 Purno
Sep 20 @ 7:56am
General Discussions
Object 279
Just got this in a $2.99 Russian loot crate, it looks like some kind of armed lunar rover. lol Anybody that has one of these have any tips or suggestions for playing it...?? I know it has a reputation for being well armored and equipped with a powerful gun, but it's also slow and has a long reload time, so that probably balances things out somewhat. I know some of you hate the loot crates, but on the next roll of the Russian crate I got a BMPT Mod. 2000 which netted me 9K gold since I already own that v...
11

3 Wire
Sep 20 @ 9:08am
General Discussions
Do people even play this game ?
Been here for 10 mins and can't get a game. When this game first came out I got in instantly which is ok since it was a new game. Then a year later queue times slowed down but wasn't this bad. Do people not play pvp anymore ?
13

Messerschmitt 262
Sep 17 @ 9:01am
General Discussions
State of PvP
I just recently came back to AW and I found the gameplay quite enjoyable. But first thing that made me wonder was M113 at tier 3. Why is that vehicle not nerfed? It's OP as hell and would be still good enough with e.g. halved damage or any other kind of significant nerf. Then at tier 5, Objects 279 started. That one is ridiculous. I see Obj279 drivers driving straight to the enemy base, negating any tactics that is mandatory for any other vehicle at that tier. Even the wiki states that its armor is extre...
13

WishFish
Sep 12 @ 12:49pm
General Discussions
No one has rated this review as helpful yet

Recommended
19.1 hrs on record
like any other tank game you played, BUT way more fun.