Democracy 3: Africa is the new standalone 're-imagining' of the hit political strategy game 'Democracy 3'. Set entirely in countries on the continent of Africa, D3:A puts you in charge of these countries and challenges you to stay in power whilst fixing each country's problems, improving the...
$14.99
Visit the Store Page
Most popular community and official content for the past week.  (?)
Let us know your thoughts on balance, anything you think needs tweaking...
We are collecting feedback for an upcoming patch to tweak the game, so we would like to know anything you have found wrong, too difficult, an effect that should be there but is not, policies that are too powerful, or take too long to implement, situations...
88

cliffski
Jan 2 @ 12:06am
General Discussions
Working on crash to desktop fix
We are aware of a crash bug recently introduced into the game and are currently working on a fix, apologies for the hassle :( In the meantime: PLEASE disable the electioneering DLC (if you have it) and ALL non-official mods for the game. It should then ...
59 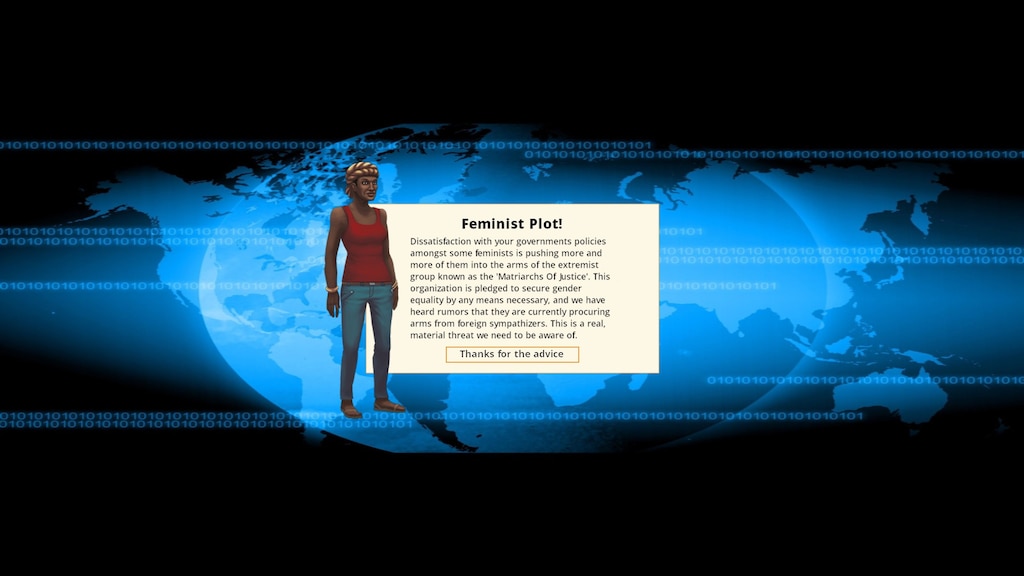 4
Ban
55
Always those femmies.. just caus i joked a bit at the last press conferences about kitchen work? Tzz..

Differences from Democracy 3
A brief run-through of whats new and different in Democracy 3:Africa for people who are already familiar with the original game.
22
25 ratings 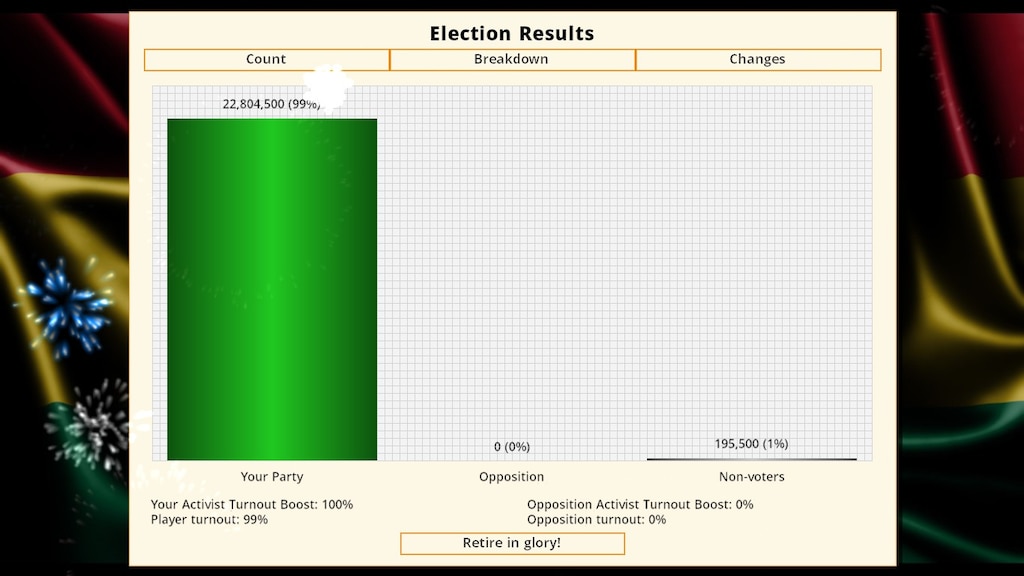 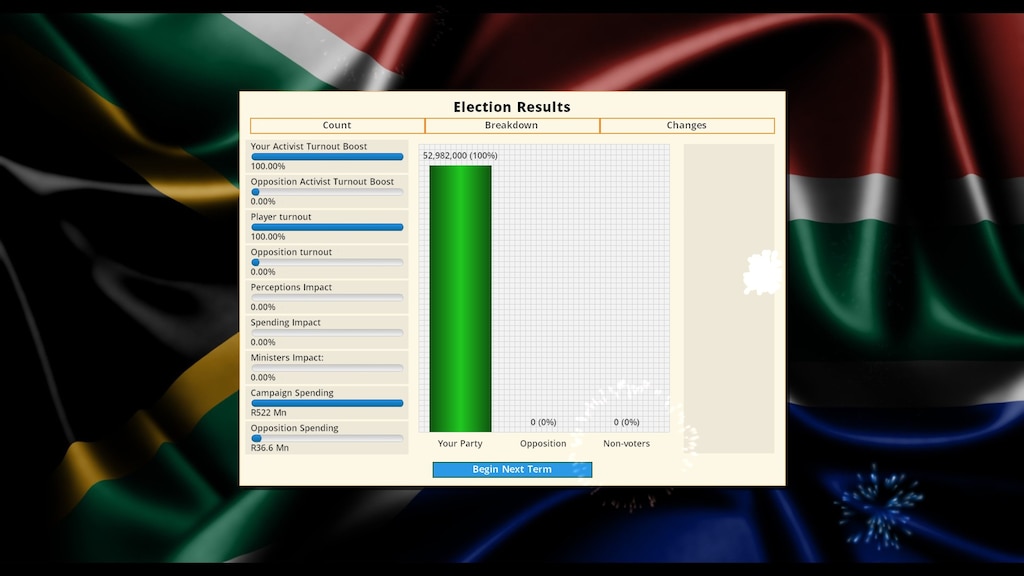 0
Ban
17
Thank you. Socialism is victory! 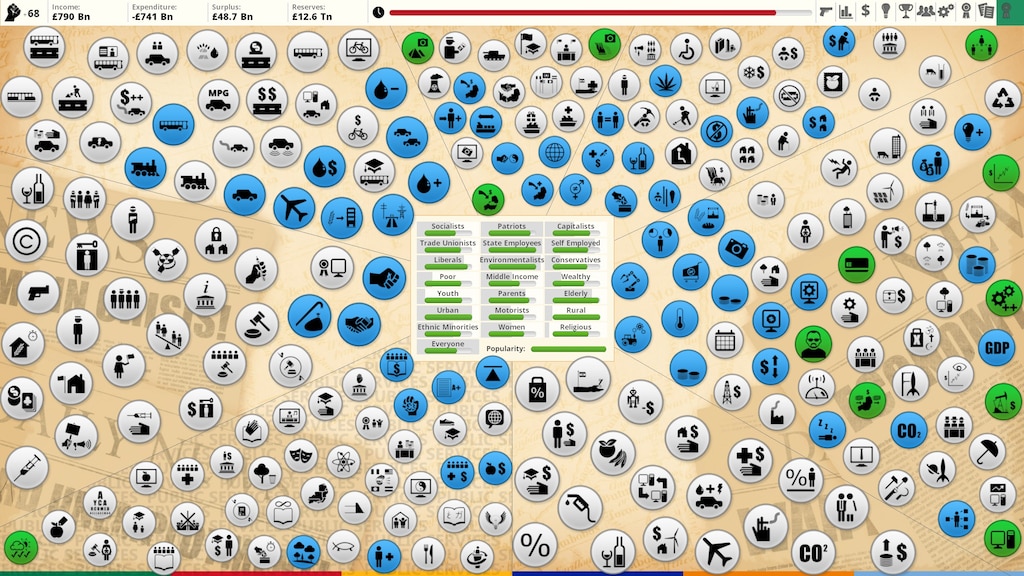 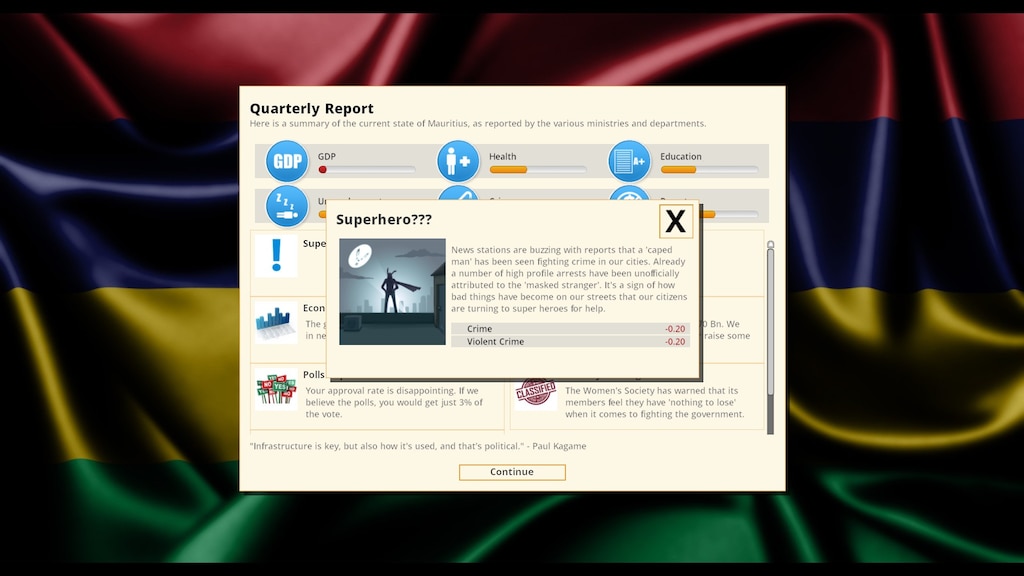 Penguins_canfly
View screenshots
Don’t own D3. Will DLC work?
I’m thinking of getting some DLC packs. Will they work in D3:A if I don’t have D3? I can’t seem to find a straight answer.
1 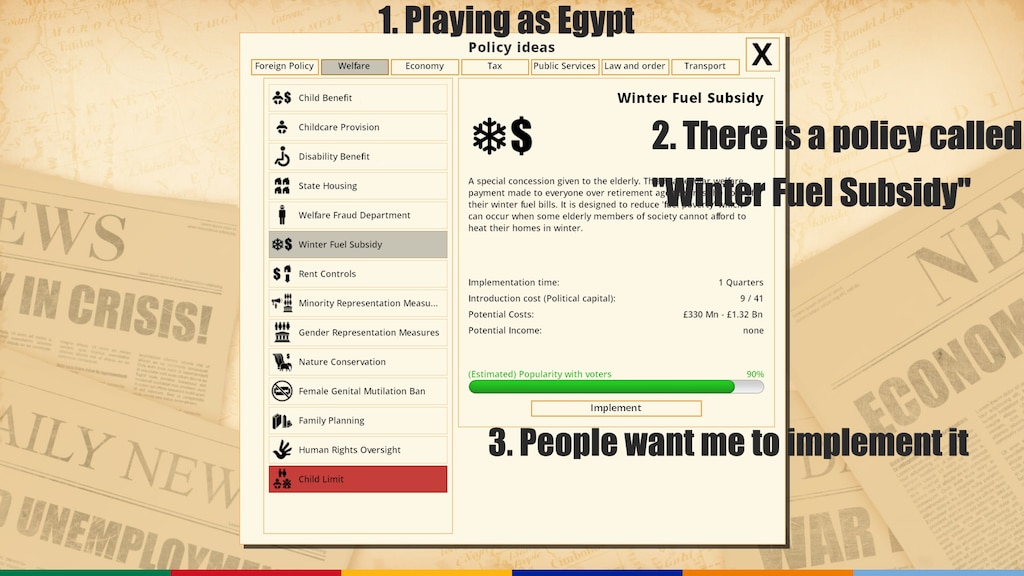 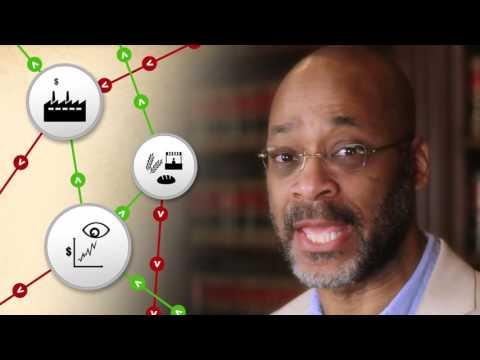 Chi (Nils) ♿
View artwork
Rural membership biased?
This basically happens in every game. I take all the policies related to increasing rural memership (all sorts of grants, etc.). Then it just goes down to zero. How??
42 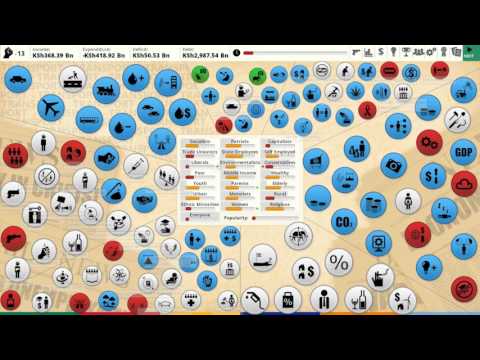 Basic Tips
Scope of this guide Some general tips when starting a new game and some easy solutions to some problems/situations. If you any tips and/or sugestions please add a comment and i will add it
0

Jens [GER]
View all guides
Popularity
No matter what I do, my popularity is at 0%, is this a bug or what? I only passed laws with a 90% popularity, I fought things that the mayority was against. For example I managed to stop the HIV problem in Nigeria, result of it? Popularity still at 0%.
19

Hezbollah Hans
Jan 9, 2018 @ 8:20pm
General Discussions
No one has rated this review as helpful yet

Recommended
14.5 hrs on record
To preface this review, I've never played any of the previous entries in the Democracy series, including Democracy 3 and its DLCs. That being said, I personally don't think you need to play any of the other games in the series to enjoy this game. It is essentially Democracy 3 with a few design changes. And yes, my profile picture is from this game. I like how subjectively goofy the art looks.

With that out of the way, Democracy 3 is a competent game considering what it's trying to be. For anyone thinking this is like Sid Meier's Civilization (which is a common comparison people who haven't played this game seem to gravitate toward) or similar games, it's not. It's essentially the Always Sunny "Pepe Silvia" scene with the cork-board for the mail. You'll make a policy change thinking it'll help your African country of choice, and in reality you screwed something up so badly that your approval dropped 20% seemingly overnight. You'll go insane, and hopefully pull a campaign win out of your ♥♥♥ last minute. And that's the beauty of this game.

Factually, Africa is an ethnically diverse and complicated geographical area. In many ways, the continent is a unique blend of many conflicting factors and paradoxical metrics. D3:A simplifies this to a large extent, but I think it exemplifies the chaos that governments in Africa seem to constantly face. Compared to what I've seen of D3, it seems that policy changes have a more profound role in African society, though of course this differs from country to country. It seems like the majority of people don't even know what Mauritius is going into this game, let alone that it's a fairly successful and stable country in the grand scheme of African affairs.

To go into policy changes in more detail, you select the lengths to what lengths a particular policy goes to. It can be whole-heartedly supported by the populace, or hated. Usually it's somewhere in between. You have to find a good balance between keeping particular political blocs happy, and, like real life, nine times out of ten you'll end up ♥♥♥♥♥♥♥ off a group on the sidelines that you never considered when trying to solve a dispute between two other groups. It happens. Your party also has core constituents and followers that like your position at the start of the game, so even if they don't personally align politically with you as a person, you'll have to appease to them to get votes as a player. Or not. Maybe you go full autocrat and just try to stave off assassination attempts. It's your life and your government.

Your goal in this game is to get reelected. Sometimes it's a predictable path and other times you'll get screwed over last-minute by a sudden event outside of your control. Welcome to politics. You can set your own term limits at the start of the game and the name of your party as well as some other miscellaneous options, like the percentage of voter apathy in the country, at the start of the session. You can also employ policy changes that affect your office as a whole, like the amount of power the government has or how much it's divided to local districts mid-game.

The five other major gameplay elements are political capital, the cabinet, the intelligence agencies, sudden events, and budgeting. Political capital is required to make most political decisions. The more discourse you have in the country, the harder it is to change policies easily. It makes sense. The cabinet is your circle of advisers. They have their own leanings, so surround yourself with a mixture of opinions and positions that will ultimately (hopefully) mesh together towards a common goal for the elections. The intelligence agency monitors terrorist activities. They try to alert you to assassination attempts on your life or attacks on the populace. The sudden events like nearby countries undergoing civil strife or the downing of planes come up fairly often. You'll have to deal with those in ways which will undoubtedly shape your public perception based on your decisions. Finally, budgeting is a big part of this game. Taxes and subsidies are incredibly important to having a sustainable economy and society, and your credit rating will go up or down depending on your actions. Sudden events like a global recession or economic boom also affect your budgeting capabilities.

That's about it. It's a fun game for what it is. It's got decent replayability and a lot of content for the much smaller entry fee of D3 and its DLCs. Just be wary of buying this game for achievement hunting, they're not that hard to achieve on paper but sometimes just refuse to work properly. Also, don't buy the game expecting great visuals. That's not this game's goal. They do look pretty funny, though.