The Fall of the Dungeon Guardians

We have teamed with other devs to present you a bundle offering the best recent grid-based crawlers on Steam, with 25% off (cumulative with any other running discounts) ; and you only pay for the games you don't own yet.

Check out the bundle here: http://store.steampowered.com/bundle/6808/Gridbased_Crawling_Bundle/ 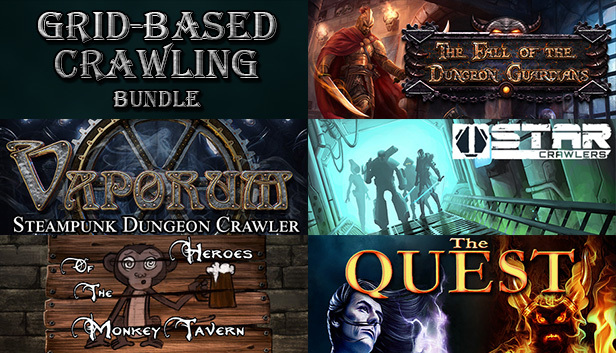 The Fall of the Dungeon Guardians
35
4
Version 1.0j released !
Jan 8, 2018
This is only a change of version to officialize the big series of bug fixes & tuning that has been done since last September, after the release of the Enhanced Edition (ie: v1.0i).

Gameplay wise, the most important bug by far was that the threat enhancement & reduction talents didn't work (abilities were ok, though).

The biggest bug, but with limited gameplay consequences, was that the Bosses were always seen as 3 levels under your Party members instead of 3 levels above. I fixed that and re-tuned all Bosses so the combats are still balanced in a similar way.

Also a few talents didn't work correctly or didn't match exactly their description. And some other little things like that. So thanks to peddroelm who took his calculator and checked everything down to the last digit..! ːsteamhappyː

The Fall of the Dungeon Guardians
52
11
Enhanced Edition !
Aug 14, 2017
The version 1.0i has just been released, and this is another important update that brings new features and polishing to the game.

This is the 8th big update since the initial release of the game on Steam, back in November 2015, and hopefully you'll agree that all these updates combined deserve the title of "Enhanced Edition" ! ːsteamhappyː

Before seeing a recap of all the improvements done, let's focus on the version 1.0i
So its main additions are :
- a better streamlined party creation with more info where it's needed
- a macro system to save & restore your team members' ability queue
- smoother rendering if you play with a refresh rate higher than 60hz
- new Toggle Selection icon that should make its use clearer when discovering the game

And here a summary of the most important additions to the game since its initial Steam release :
An issue ? A question ?
Check the FAQ here => http://www.managames.com/DungeonGuardians/faq-troubleshooting/ .
Then come to get help within the forum here => http://steamcommunity.com/app/409450/discussions/ .

Farewell (?)
Ok, this time, it is very likely the last update with new features. Or at least, there's a discernable possibility. ːsteammockingː

However, if there's some bugs needing to be squashed away, or some tuning required, I'll be ready to intervene..!

The Fall of the Dungeon Guardians
71
19
Version 1.0h released !
Jun 12, 2017
On game release, back in November 2015, someone asked if I could add a minimap to the game. I thought it was not a good idea, because it would greatly encourage the player to focus his attention on a small part of the screen while exploring.

However, a few weeks ago I watched a Let's Play of Dungeon Guardians on Youtube where on several occasions the guy literally opened & closed the map after every single step he had moved. So it made me realize there are some people whose sense of direction is easily confused, even in straight alleys, and thus couldn't enjoy the game at its fullest without a minimap.

And thus, here the version 1.0h of the game, with a Mini-Map ! ːsteamhappyː
You can activate it from the Options -> Game Options -> Helpers menu.

Taking the occasion, I also added the possibility to change your characters' name by clicking on it in their Character Sheet, as it was requested in another Let's Play video.

I hope you'll enjoy this update, and the real question now is : will it be the final one or not..? ːsteammockingː

So a few weeks ago, I released the v1.0g whose main & sole addition is the "Low Enemy Density" option which removes about half of the Common enemies, but not the Elites nor the Bosses.

You can enable at any time this option if you think there's too much combat ; loot and XP will be automatically adjusted so the game plays the same.

So this option has the triple benefit to lower the time to beat the game, to spend less time in combat and more on exploration, and to slightly randomize the enemies you'll meet, so if you want to replay the dungeon, you won't meet the exact same set of common enemies.

The Fall of the Dungeon Guardians
49
10
Version 1.0f released !
Dec 5, 2016
A little more than 1 year after release, this is likely the last feature update for the game as it now includes all the popular requests expressed by the players.
I'll still do fix updates if any glitch or bug are reported, though.

So this version 1.0f brings 2 new features :
- GUI : moving the cursor over the damage & healing numbers now shows who did those and with what ability. This is a close equivalent of the requested combat log, and hopefully it'll help you to figure out who did what and when.

- GUI : you can now move and scale most GUI elements ; This is especially useful for the Dps History Graph which can get a bit in the way ; HowTo => http://www.managames.com/DungeonGuardians/faq-troubleshooting/#toosmall

The Fall of the Dungeon Guardians
66
35
Version 1.0e released !
Sep 19, 2016
This new version brings destructible barrels, food and drinks that restore health and mana when you're outside of combat, as well as a new puzzle for the Level 2, and a few additional secrets in the first couple of levels.

I hope you'll enjoy all these additions as they were popular requests. :-)

Note: version 1.0e was already released since a bit more than 1 month, but I still hadn't posted a news about it.

The Fall of the Dungeon Guardians
45
11
Version 1.0d released !
Jul 18, 2016
This new version mostly brings the final touch for customizing the difficulty : now, if you select the Custom Difficulty and turn on the Advanced Tuning, you can set the strength of Normal, Elite and Boss enemies separately.

Note: it's still recommended to play with one of the numerous built-in difficulty levels, as most players do, but if you wanted more freedom of choice, here you go ! :-)

This new version also brings a bunch of enhancements and fixes for the Map Editor to give a more user friendly creation.

the Soldier difficulty has been added.

After the initial game release back in last November, I lowered the Adventurer difficulty to better match the average expectation of the Dungeon Crawler fans. This created an important gap with the next difficulty, named Warrior, which is more aimed to Veteran players of Tactical Combat games, and could be seen as an "Hard" mode for such kind of game.

This is why I added the Soldier difficulty, which could be seen as a "Hard" mode for the Dungeon Crawler fans and a "Normal" mode for the Tactical Combat fans.

In both cases, I hope you'll enjoy it and that it will help you to get a more fair start in the game ! :-)

Note: the 1st dungeon level is much easier than the next ones, to give you time to learn the game's base mechanisms.

The Paladin is now globally much more effective, especially as an off-tank. The Necromancer is also much more capable and almost in par with the Druid, even if he is still a bit more technical to handle.

The Fall of the Dungeon Guardians
44
1
See More Content