PACER is high-octane anti-gravity racing at its most destructive. Customise your craft and weapons then engage in the campaign, a single-player race or compete against your rivals in explosive online multiplayer for the ultimate combat racing experience.
$39.99
Visit the Store Page
Most popular community and official content for the past week.  (?)
PACER: HOLIDAY EDITION - Developers Stream
Dec 23, 2020

Santa is flying in at F1000 speeds this year to spread holiday cheer to all the pilots on his nice list!

Log in before January 4th to experience some festive AG racing with Trackside decor featuring snowfall, presents, lights, bulbs, Christmas trees and also receive a variety of craft cosmetics including :

-Gift Wrap base skin for each craft.

These are yours to keep and enjoy throughout your time playing PACER even after the holidays.
Merry Christmas and Happy Holidays from Team R8 Games!

Pacer
31
0
Bug Reports
Stick any bugs you find here. To make our life easier please include as much detail as possible about your rig and most importantly steps to replicate the bug Is it 100% repeatable or less than 50% etc etc We are aware that the voice chat UI is still present in the Lobbies. This will be back and working soon....
102 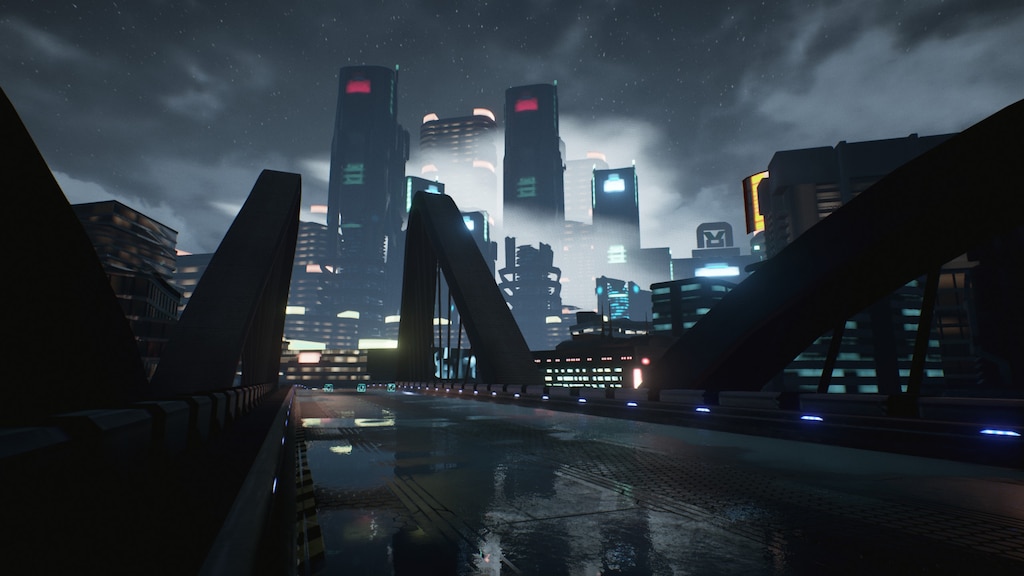 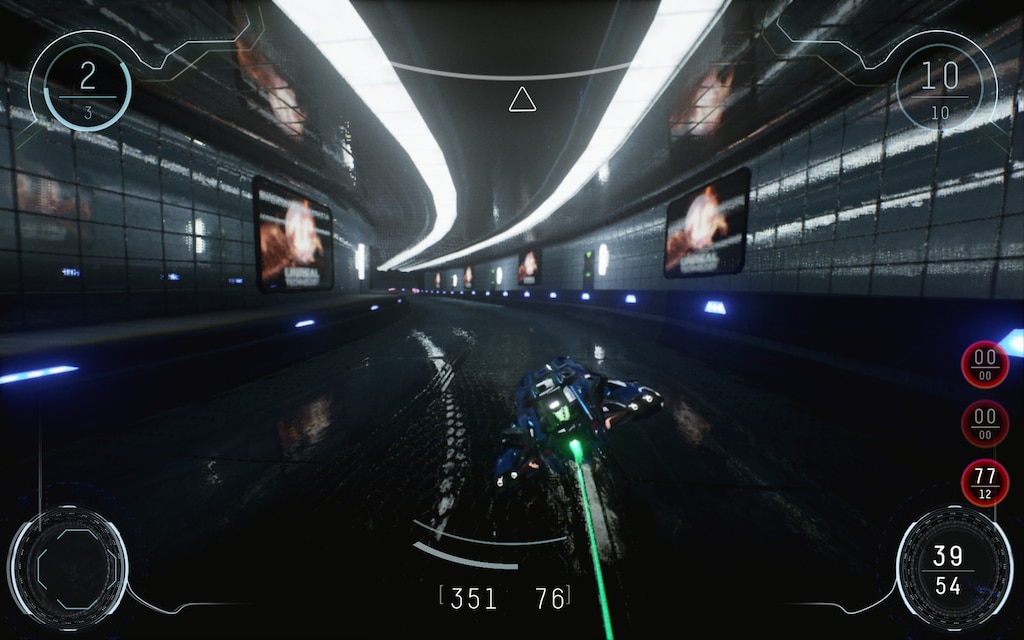 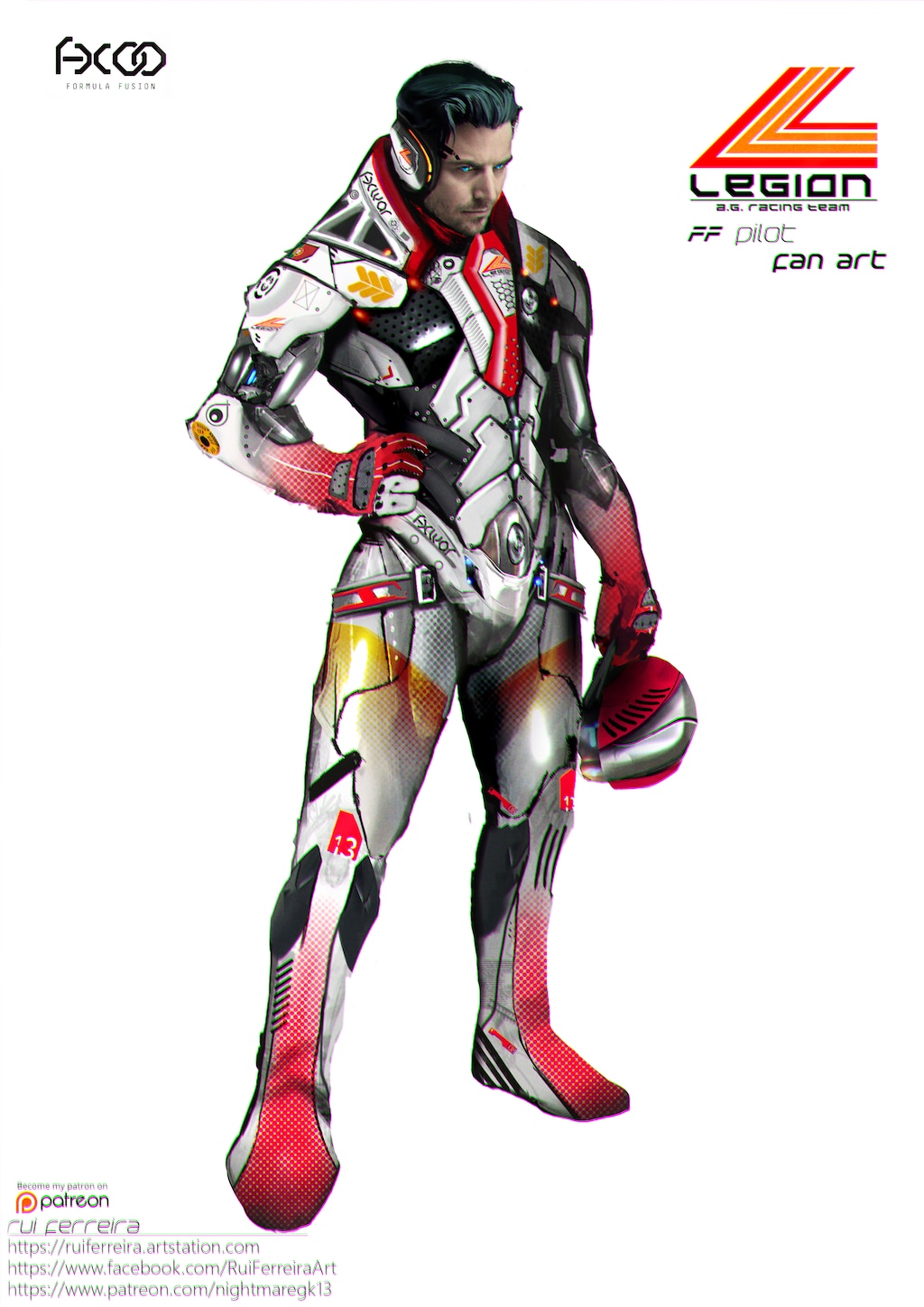 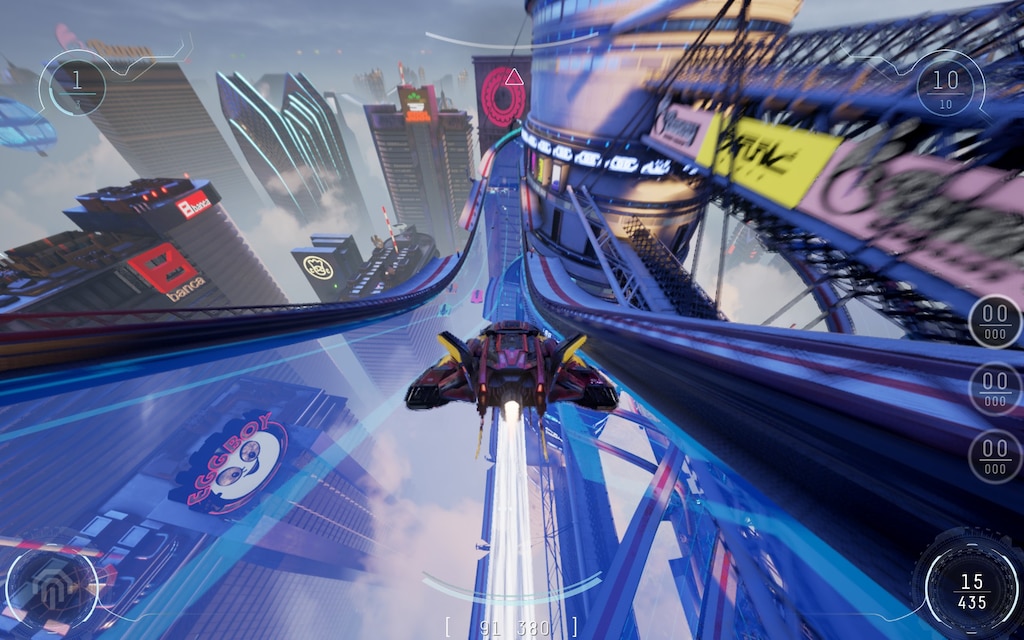 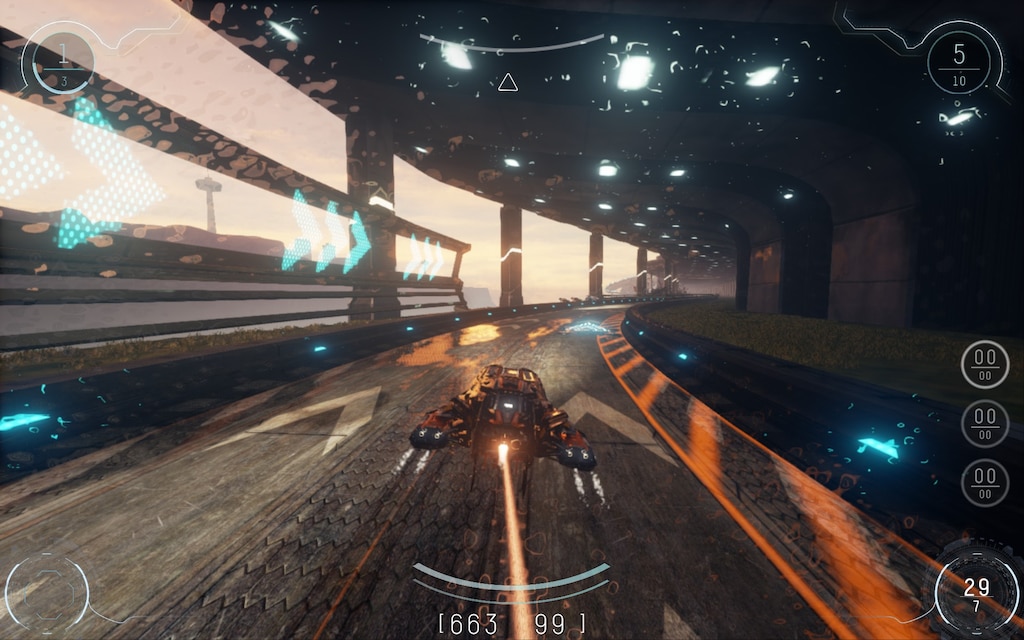 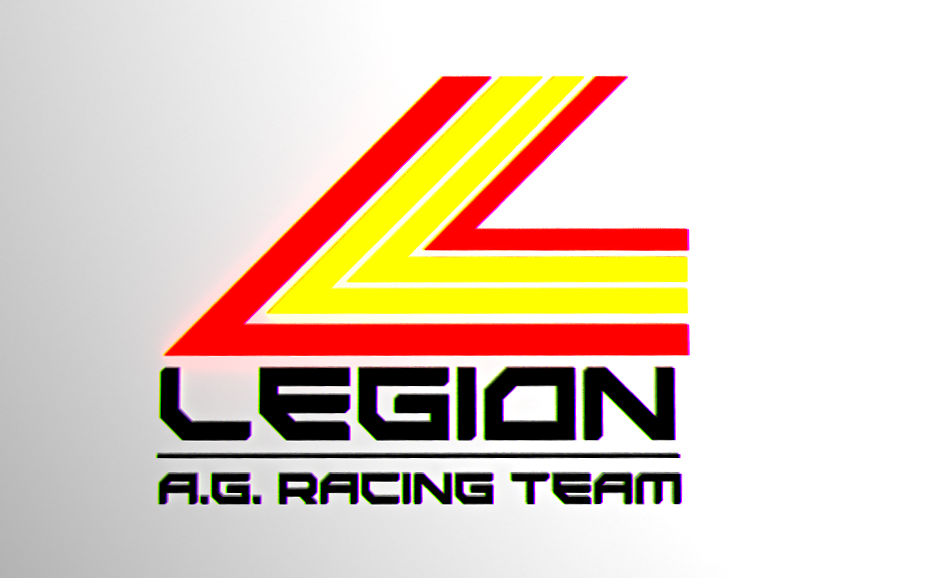 Ryke Wollf
View artwork
Feedback about Pacer
Pacer is a nice game. Reminds a little bit about POD or HI-Octane or Megarace ... except the missing funny Videos. The controller works great and it looks very nice. And for the price i bought this game it feels like Gold. But ... the difficulty of the singleplayer game is made only for experts in this kind of genre ... which is sad. I guess experts go directly into multiplayer and beat the hell out of real honor. So the singleplayer is more a nice short fun part for most of them. I must say I am a ve...
5 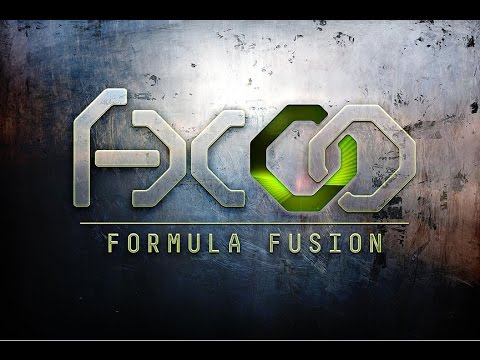 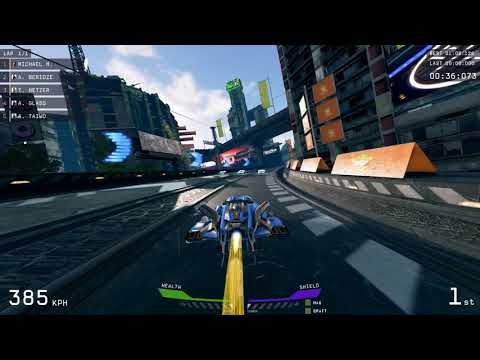 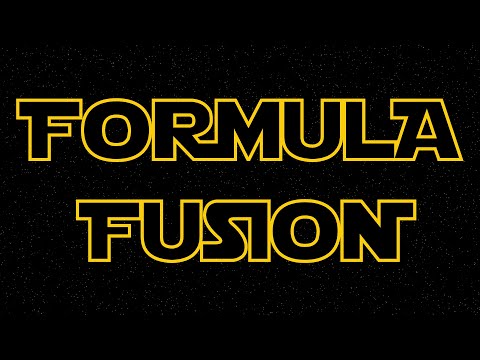 Recommended
26.4 hrs on record
Fantastic game! I just wish there were more players as it would really shine if there was a good multiplayer scene. This is the only factor holding this game back from true greatness.

Formula Fusion - quick guide
Here's a super quick, mainly visual guide to what to look for in Formula Fusion. At its heart it's an arcade racer. There's not a huge amount to explain on the surface. We're going to be adding to the guide with videos of basic and advanced techniques ... 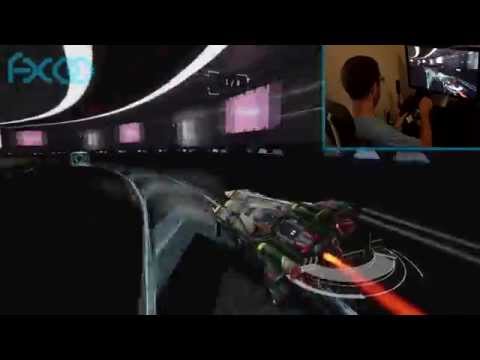 Not Recommended
3.2 hrs on record
Product received for free
So eh, where do I begin with this? Everything about Pacer is just poorly executed from the ship design to the visuals. The ships handle like utter arse, are a bawache to control smoothly, look bland as all buggery, and are just an overall bore to pilot. Track design is all over the bloody place. Those who initially got the game when it was Formula Fusion will recognise a good chunk of the tracks from before and will also know that compared to the ones Pacer brought to the table handle differently. The old tracks are narrower and tighter and ABSOLUTELY god shagginly abysmal to even play at the fastest speed class the game has to offer. The tracks added with Pacer are far, FAAAAAAAAR, too wide and open making them feel bloody empty and slow to play. Oh and on the subject of tracks, why in the utter ever loving Cthulhu worshipping arse sniffing ♥♥♥♥ are boost pads, weapon pads, and shield pads so obnoxiously hard to hit with their pitifully wee hitboxes? It's a combat racer, how do you bugger that up? Also, why do the pickups have no pad? They're just floating there. Having a texture or model that indicates an emitter for the hologram would help in making the pickup of such much easier. If you even think about turning off the Anti-Aliasing, DON'T, for some stupid reason reflections require it on and if turned off, start having a grand seziure that is distracting as hell. The weapon loadout system for this kind of game is just flat out bloody stupid. Can only equip two weapons you can use in a race everytime you hit a weapon pad. Just have it randomise the weapon you get from a bloody pad like the game you're trying to emulate ffs.

Oh and for the record, No, none of the original devs from wipeout worked on this. The Designers Republic are a Graphical Design Studio, not a developer.

If you honestly want a good wipeout spiritual successor please save your money by giving this a pass and buy Ballistic NG. Not only is it cheaper, it has a far better soundtrack and art direction, 2 DLC campaigns with additional tracks(first is free as it was an experiment to adding DLC, the second is cheap as chips), free dlc tracks added now and again, INCREDIBLE MODDING SUPPORT and an active community. Hell, it even has crossover content with GRIP, the Cygon Tempest is available as one of the base game ships and a handful of others were lovingly recreated with the GRIP devs blessing by a couple of the community's top modders.

Katcher
336 products in account
0
Multiplayer is empty :(
Hi, i love this game but there is often no one in multiplayer, i'm searching players add me to have fun !
3

It's time to JOIN THE RACE.

Get 42% off during the Winter Sale.

"With the likes of DIRT 5, WRC 9 and F1 2020 out there, Pacer does something different yet familiar that hasn’t been experienced with such perfection in some time" 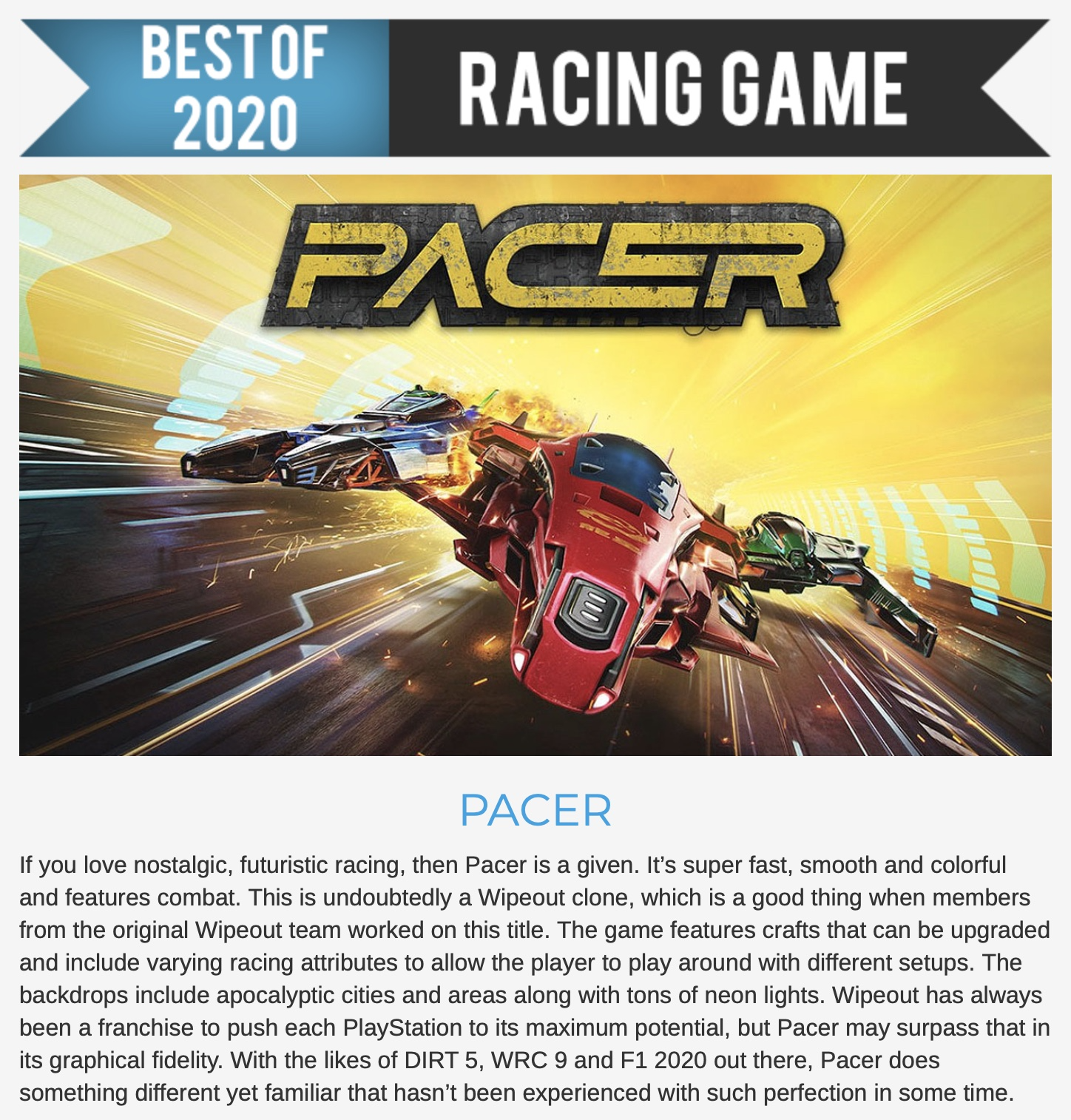 Santa is flying in at F1000 speeds this year to spread holiday cheer to all the pilots on his nice list!

Log in before January 4th to experience some festive AG racing with Trackside decor featuring snowfall, presents, lights, bulbs, Christmas trees and also receive a variety of craft cosmetics including :

-Gift Wrap base skin for each craft.

These are yours to keep and enjoy throughout your time playing PACER even after the holidays.
Merry Christmas and Happy Holidays from Team R8 Games!

Pacer
47
4
Is Pacer Really That Horrible?
Hello, From what I've read, the game is still in terrible shape after years in "Cooming Soon", even though the game is actually just a huge patch for Formula Fusion. Is that correct? It would be a shame for another AG racing game that was thrown into the sand. Greetz VN...
36

VaeliusNoctu
Dec 4, 2020 @ 2:36am
General Discussions
No one has rated this review as helpful yet

Not Recommended
8.7 hrs on record
Why no split screen. Online is dead. Have not been able to find match since purchase. 2 stars