Thanks to all of you that participated in the beta!

We have revamped the entire clan tab with a new UI and a whole new raid system.

-- While you'll start off gaining only small amounts of rubies, the stronger you grow, the more rubies you'll earn by defeating higher level Immortals.

-- Raids now have you choose one of the three classes to do battle against Immortals: Rogue, Mage, or Priest

-- Immortals are weak to a different one of the classes everyday so work with your raid to have all the types covered.

-- After completing an Immortal for the day, your clan has the option to buy an additional fight for rubies based on the level of the Immortal.

-- The bonus fight allows you to gain even more Rubies and Immortal Souls per day.

-- Only one member has to pay for the whole clan so work with your clan to spread the wealth.

-- Immortals in the new system are much tougher than before and some will require farming in order to beat.

-- Clan Masters will be able to stop the automatic progression of Immortal fights so that they can stay on an Immortal they can beat and therefore continue to get rewards.

-- Not every Immortal will take your entire roster of ten to beat so as long as you show up for the day, even if the Immortal is dead, you can check-in for the rewards.

Apart from those features, here are some other key differences compared to the old system:

-- Only 3 Autoclickers are allowed in the fight at a time

-- Only the best of your scores counts against the Immortal but you can pay 10 rubies to try to improve your score.

Patch 1.0e11 has arrived along with new heroes to recruit! We also got some major balance changes and improvements for you to enjoy!

Rubies:
* There is no longer a limit on the number of ruby clickables per ascension.
* Quick Ascension's hero soul reward will no longer grow past zone 1000000.
* Adds a 168 hour duration Timelapse purchasable for 50 rubies.
* Timelapse now has a minimum gold reward of an average monster farmed at highest zone this ascension.

Mercenaries:
* Base rewards for gold quests now have a minimum reward of an average monster farmed at highest zone this ascension.

Skills:
* Clickstorm now provides a temporary +1 Auto Clicker (+2 when Energized) for its duration (changed from a flat +10 CPS).
* Activating a skill while idle will no longer break idle.
* Clicks from Clickstorm will still break idle.
* Golden Clicks will not benefit from idle gold since it requires clicks which break idle.
* Energized skills now have a pink glow on the action bar.
* Activating a skill while it is still active will now extend the energized state in addition to resetting the duration.
* Skill durations longer than 60 seconds are now described in terms of minutes, hours, and days in the tooltip.
* Skill tooltips now list the time remaining on an active skill.

Miscellaneous:
* Modifier toggles now set the default modifier for a tab:
* Holding a modifier key supersedes the toggle but doesn't change it.
* The xMAX hero leveling modifier now levels an even 10000 levels (changed from 9999).
* Adds a stat for Critical Click Damage to the Stats Panel.
* Adds a stat for Auto Clicks Per Second to the Stats Panel.
* Adds text to the Ancient tooltip describing the current level purchase modifiers.
* Adds text to the Ancient tooltip describing the 'V' modifier which can be used to enter a custom ancient level quantity.
* Transcension Ancient Soul counts now also include the current ascension when showing AS to be gained from transcending.
* Adds an option to toggle the 'Entering Zone' text.
* V+Click leveling now supports a decimal place on the number's base (i.e. 1.1e10).

Bugfixes:
* Fixes an issue where the language button overlapped the close button in the options menu.
* Various bugfixes.

We got a massive patch for you today with tons of changes and improvements! As always, thanks so much for your support, and please let us know what you think! 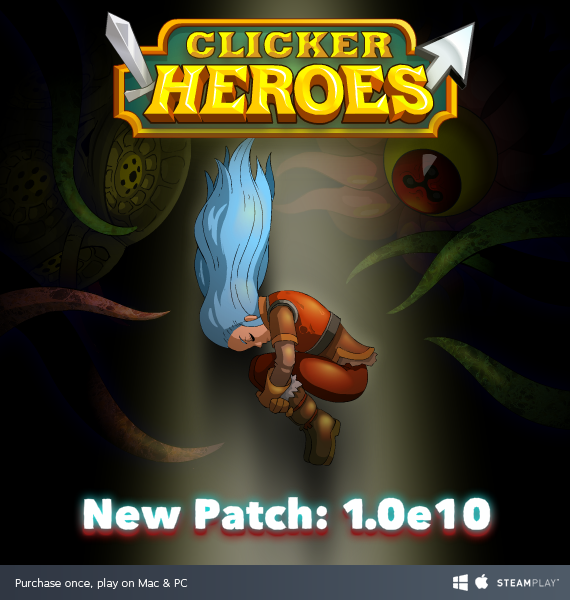 Ancients:
* Solomon, Ancient of Wisdom has been removed for players who have transcended and can no longer be acquired.
* Reintroduces Pluto, Ancient of Wealth. Gives +% Gold from Golden Clicks
* Nogardnit, Ancient of Moderation now gives +% DPS per unassigned Auto Clicker when idle (change from +% Gold)
* Kumawakamaru, Ancient of Shadows now approaches -100 monsters required to advance to the next zone with a minimum of 2 monsters per zone (up from approaching -8 monsters)
* Dogcog, Ancient of Thrift now approaches 99.99999999% hero cost reduction (up from 99%)
* Bubos, Ancient of Diseases now reduces boss life by a number of monsters instead of a percentage (description change only)

Heroes:
* New Heroes!
* Xavira
* Cadu and Ceus - dual heroes that upgrade each other
* The Maw
* Yachiyl, the Primordial Soul

Miscellaneous
* Save files are now compressed into a new, smaller format, reducing their overall file size
* Clickables will now appear in random positions with random rotation and scaling instead of being fixed to a few locations
* Transcending will now automatically ascend as well, adding those Hero Souls to the total sacrificed
* Zones will now always show monster requirements even when the zone is complete.
* Adds a new animation for primal bosses
* Adds a new visual representation of zones to the zone selector
* Adds an icon in the zone information to describe the current effects for the zone range
* Adds a button to summon all remaining ancients if you can afford the Hero Soul cost
* Improves the performance of opening and moving gilds
* Reduces the frequency of HZE updates are sent to the clan server

Bugfixes:
* Fixes a number of issues related to clans, particularly at large Immortal healths or Immortal damages.
* Fixes an issue preventing Click Combo from continuing to grow.
* Fixes a bug where the first click when idle would still give idle gold for Golden Clicks.
* Various bugfixes.

We got an update for you today with tons of quality of life improvements and bug fixes. We also have a content update coming soon so please look forward to it! And as always, let us know what you think!

The winter holidays have arrived in Clicker Heroes. Join in on the festivities with a new seasonal mini-game and mercenary quests. Come get your presents!

Also, be sure to get your Red-Nosed Clickdeer to help stomp the monsters!

- Seasonal Event: Merry Clickmas!
- During the "Merry Clickmas!" event, you can collect presents containing Rubies and Relics as well as special holiday items such as Auto Clicker skins, Candy Canes (which can be used to resurrect fallen mercenaries) and more.
- Seasonal Mercenary Quest: Mercenaries can be sent to retrieve Clickmas Presents for you. This quest is always available as a fifth quest option for the duration of the event.
- Seasonal Minigame: Present Panic! Clicking on a special clickable during the event brings you to a fight where you can click rapidly to gather as many presents as you can.
- "Merry Clickmas!" ends January 2nd.
- You are now given the option to salvage your Junk Pile when Ascending.
- Fixed known causes of ancient leveling freezes and crashes.
- Various bug fixes.

We got another great patch for you today! Introducing the new ancient Nordgardnit. Summon it to take advantage of your new auto clickers! We also got a bunch of bug fixes and quality of life improvements, especially for languages.

Don't forget to get the Turkey Auto Clucker DLC to help gobble up those monsters.

We have a spooky patch for you today. Introducing the all new Auto Clickers! Take a load off your fingers and optimize your progress with this awesome new feature. Get them now!

We have a quick patch for you today!

Five legendary heroes have risen to join the fight! Be sure to hire these new incredible beings and upgrade them. They are sure to increase your power to unseen heights!

As always, thanks for the support, and let us know what you think!

The technology is here! We have made offline progression even better.

- Offline Progression: When offline, you now advance in zones until your heroes reach a boss they can't beat.
- Timelapse now advances in zones as well.
- Various bugfixes.