It’s been about 6 months since I started development on Beta 1, so it seems the latter part of my initial guestimate of development taking 3-9 months was correct. At this point all planned and unplanned mechanical parts are in place, greased up and interlocked, now the whole thing just needs a lick of paint, i.e., bug fixing, some balancing, localization support, and content, like how is a joystick made? What does a DLC contain? And what should a review say for a product designed by a visionary lead designer? "… Lead designer?" I hear you mutter. 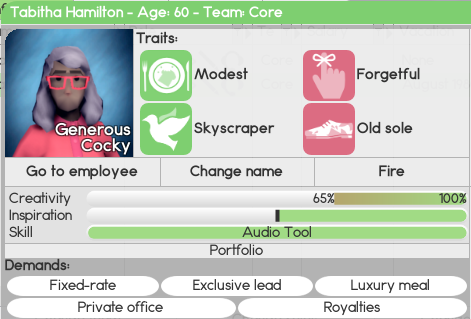 So, this was the feature I teased in the last progress update as a "maybe if I have time", and I decided that I did have enough time.

Each project (Not including add-ons, contracts, and deals) will now require a lead designer, who is in charge of deciding how a product should work and feel. Lead designers will have 3 stats which determine how well their ideas turn out for a project:
Lead designers will require extra resources in terms of salaries and custom demands, each presenting unique gameplay challenges.

How do you find great lead designers? You might be lucky and find some out-of-work lead designers, or you can poach them from your competitors, but by far the least expensive option is hiring young designers and hoping to find a prodigy. 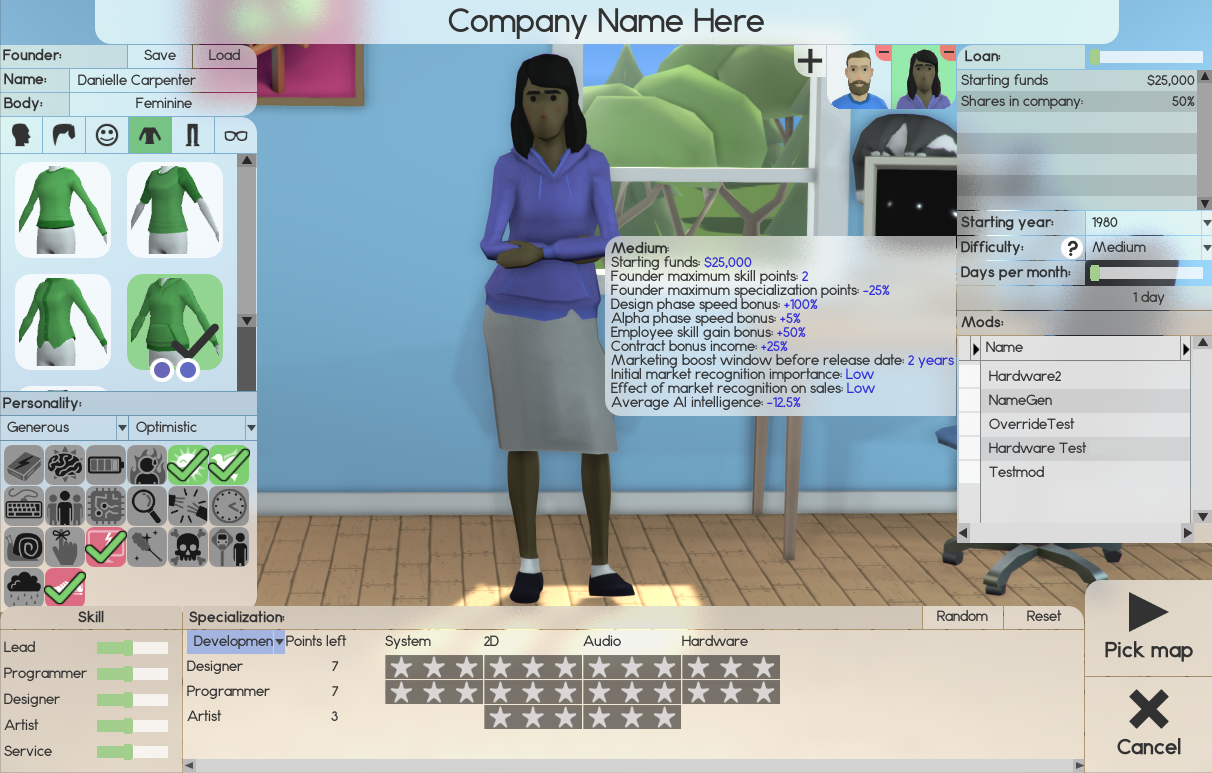 You'll now be able to start your company as a joint venture. You can start with up to 4 founders, and each founder gets an equal share of the company (excluding the main founder, i.e., yourself), which you cannot absorb until some years have passed. Note that dividend rates have been heavily raised in Beta 1, so extra founders do not come cheap.

This generalized room split algorithm also made it possible to "stamp" single room clones into existing rooms, like copying an entire toilet and pasting it inside a room without first having to carve out space for it.

The rest
The verdict on save compatibility is still out. It's currently working, but Alpha 11 games won't play very well in Beta 1.

I'm reading through all your feedback and bug reports, and I've gotten a ton of important fixes in so far. Keep 'em coming, but also note that there's a good chance stuff has been fixed already.

A snippet of changes since the last progress update:
My self-imposed deadline dictated that I release Beta 1 before the start of April, and I'm fairly confident I can make it before then, but I was also confident this update wouldn't take more than 6 months… So, let's just agree to say, "Beta 1. Probably sometime before April".

Thank you for your patience. Can't wait to see what you think!

I’ve added the ability to design how your hardware products will look and Lasse has been hard at work making it work and look great. This system will be fully moddable and hopefully it will add a bit of life to all the endless text-only lists of products and make them feel a bit more tangible.

Traits have moved from independent/social, fast learner/hard worker and lazy/stressed to individual traits that are determined by an employee’s personality, sprinkled with some RNG. Additionally, there is no longer an infinite pool of employees lined up to be hired or deallocated, but it’ll be much easier to filter through applicants as the hiring system is moving from pay-to-view to pay-to-filter. 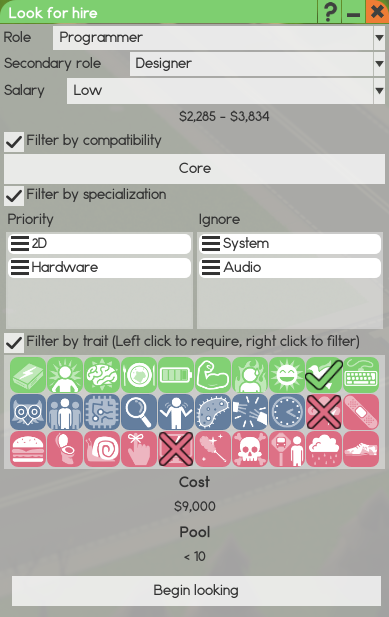 Notifications have been somewhat unhelpful up until now, mainly because it was hard to tell important from trivial messages, causing people to ignore them altogether, but also because issues would stick around even if they had already been fixed. This has changed in Beta 1 and I’ve added more complex interactions, making them super extra helpful.

I’ve overhauled the final review system, combined the post-release marketing and printing prompts, and merged it all into a single flashy release dialog, to make releasing new products a bit less anticlimactic. 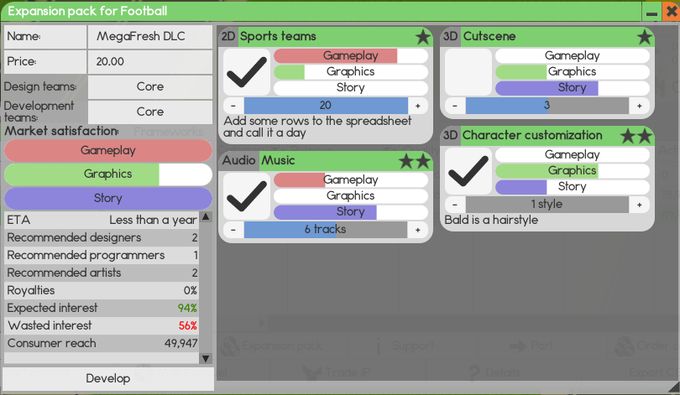 You’ll now be able to release DLC for your games, or joysticks for the most popular console on the block, to milk each product for all they’re worth. With subscription-based software, releasing content for your products will also help bring back old customers, to gain those sweet extra monthly payments. 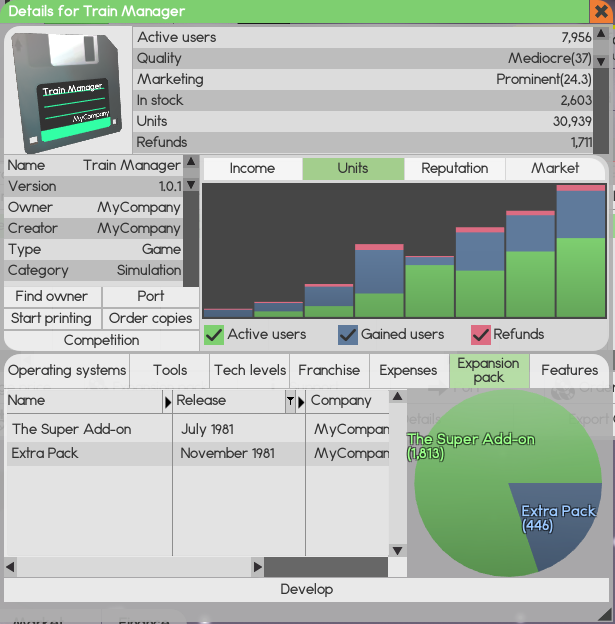 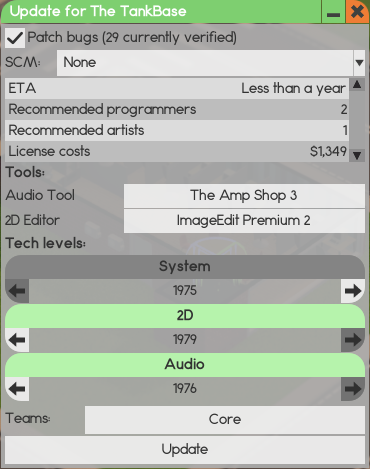 Bugs are no longer magically transported to your customers devices as soon as you fix them, you’ll now have to develop and release patches, which will also present an opportunity to upgrade tech levels, for even more subscription-based income goodness.

Save compatibility
I'm not sure I can guarantee save compatibility with Alpha 11 currently. I have not yet broken compatibility, but engine-related issues might force my hand later down the line. In any case, Alpha 11 should still be available, even after Beta 1 is out officially, so you can keep playing old saves, and a lot of the new mechanics in Beta 1 wouldn't be accessible from Alpha 11 saves anyway.

The rest
I also have another super secret mechanic planned, which will involve a new class of employee. I will reveal more when I get there.

As for when you'll be able to play it: I'm still on track with my initial estimate of 3-9 months. With the progress I've made so far, that estimate is narrowed to 3-6 months from today, as long as there aren't any major roadblocks.

Thanks for sticking around! Hope you’re as excited as I am :D

Patch notes for Alpha 11.7.58
Fixed bug causing performance to degrade slowly every time an object had been highlighted

Software Inc.
223
7
Alpha 11 is officially out!
Apr 15, 2021
To continue playing alpha 10, you should switch to the "Legacy" branch in steam, click here for example.
What’s new?
Graphical upgrade
During the development of alpha 11, Lasse, who made the current character model, joined Coredumping and increased the company size to 2 people. He’s already begun improving the art style and creating new art for the game. Here are some of his massive upgrades over the previous programmer art: 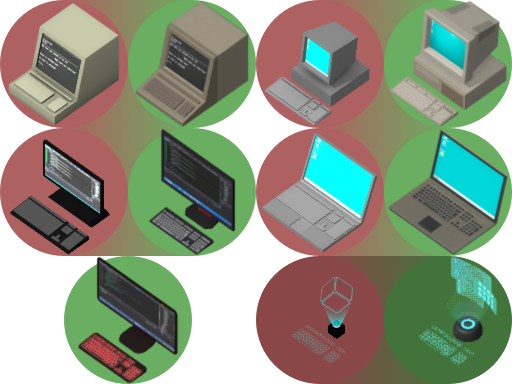 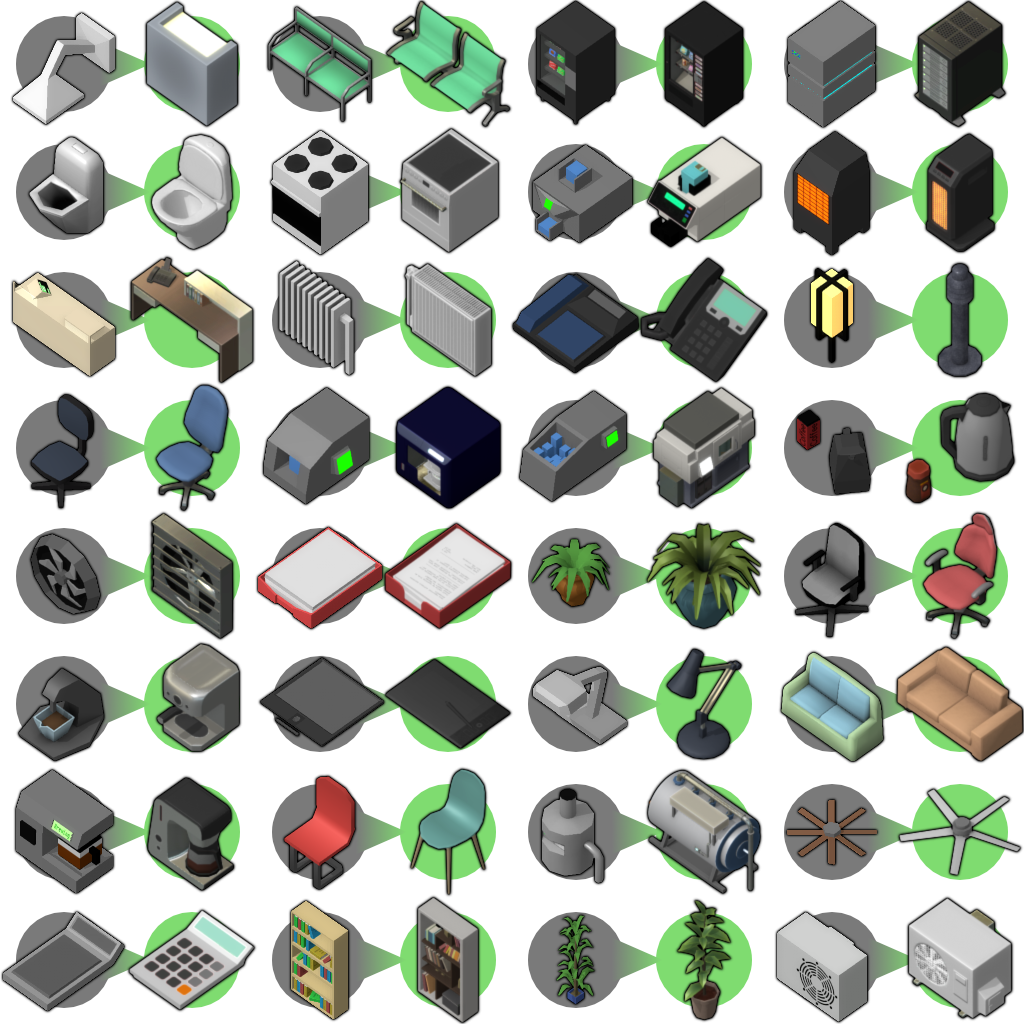 Hardware inc.
I finally caved to the most demanded feature request and added hardware manufacturing to Software Inc.

To be honest, I just decided to add conveyor belts to improve the product printing aspect of the game and hardware was a simple shoe-in at that point. Hardware adds an entirely new layer to console and phone development, and greatly improves the potential of mods.

Unlock new furniture rewards
Software inc. has gotten fairly big in terms of game mechanics over the last couple of…*checks date*… Many years! So, to avoid people only seeing a small part of what the game has to offer, I’ve added a new reward system to guide you through the game’s mechanics. The rewards are not gating any major features, can easily be unlocked and persist through all save games. I’ll definitely be adding more as I come up with ideas for rewards…

New tools to create your dream HQ
Style panel
Picking the colors and materials of your software mansion has become a lot easier with the style panel. I’m hoping this change will result in a lot less default grey rooms in your screenshots! 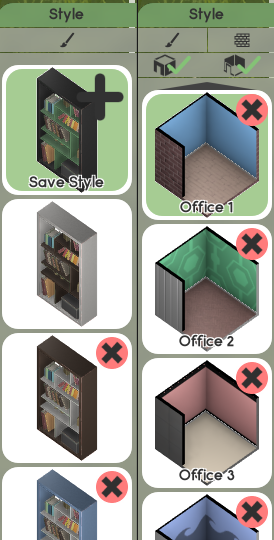 Rounded and smooth walls
You can now stretch walls into circular shapes and smooth over any hard edges.

Temperature, security and acoustics
Building your office in Software Inc. brings forth new challenges for you to plan around and overcome.

The new temperature regulation system means you can build rooftop ACs and distribute cool air throughout your office through inconspicuous floor grills and/or plop down electric radiators in every single room until your electric bill explodes.

Just make sure you don’t watch it all go up in flames due to poor fire safety and lax security systems. Or just get it insured, maybe, I don’t know.

You may also notice a slight echo when placing down the first table in your new office. Big empty halls will now be a horrible place for your employees’ ear holes, but luckily, it’s easy to combat with some well-foamed walls or well-furnished spaces. 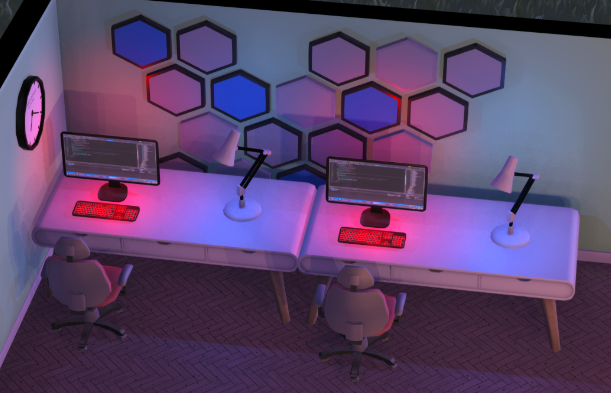 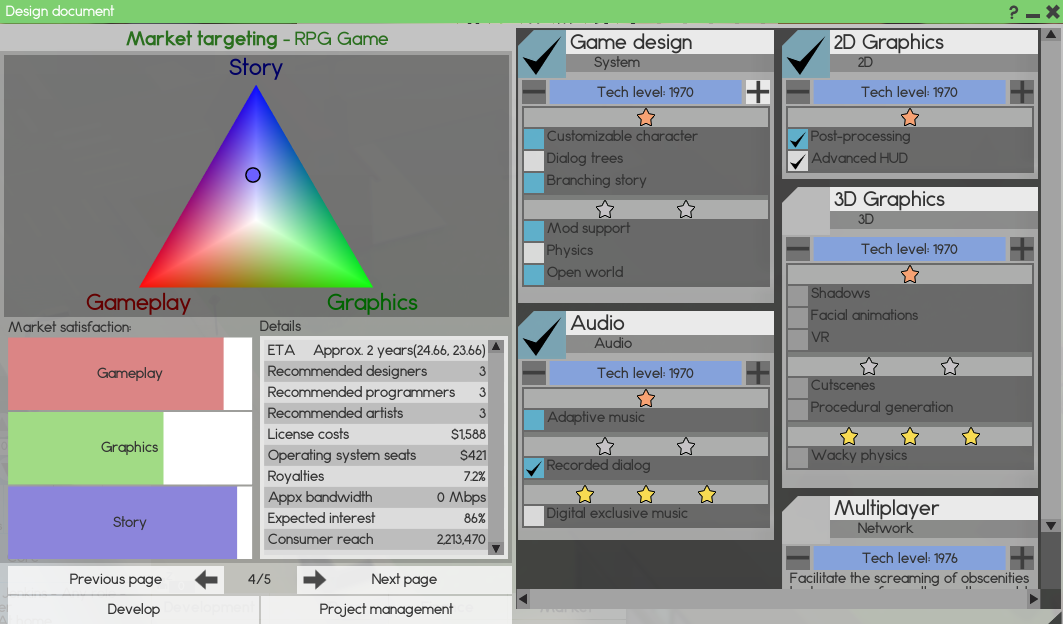 The development system has been completely revamped to promote creativeness, make research more interesting and make interdependencies clearer. This change will also have a huge impact on the "update"-update, which you can read more about below.

This change adds the notion of tech levels that are researched over the years to unlock better technology for existing features. Target demographics are now simulated in the form of submarkets, which will impact which features you should pick for your software. Frameworks have been added, which allow you to speed up development by reusing old code or licensing it from competitors. Finally, special features have been added to the game, which contain small scripts to alter the simulation in unexpected ways, fully moddable!

Your employees' educational specializations are now split up into 3 stars, which limit which features they can work on, and their base skill in each role now fully controls their effectiveness and how much quality they can add to a product. You can easily send multiple employees out for education and you'll finally be able to queue up several courses at a time.

Publishers
You can now get help with funding, marketing and distribution through the use of publishers, if you're willing to part with a percentage of the profits.

The future of Software Inc.
Immediate future
After keeping up with support for this release, I'll start working on the "Update"-update. This update will include the ability to release updates and extra content for already released software and, in extension, the ability to sell your software as a subscription service. My plan is to push this update out as part of Alpha 11. Which is to say it shouldn't break save compatibility, but I can't guarantee anything at this point.

I expect this update will take a while, as it touches a lot of core systems, which was written anywhere between now and 5 years ago, and it will include a lot of new UI work/rework. So there'll likely be the usual major-alpha-testing-release 3-9 months radio silence.

Towards Beta 1
When the "Update"-update is out officially, the game will move into beta, which means no more large mechanical overhauls and more focus on polish and balancing. The first mechanics I want to tackle in beta are research, subsidiaries, project management and digital distribution. The research and digital distribution mechanics still have some work to go before being completely done and the subsidiary and project management mechanics seem like the usual suspects, when it comes to gameplay issues I see raised in the community. 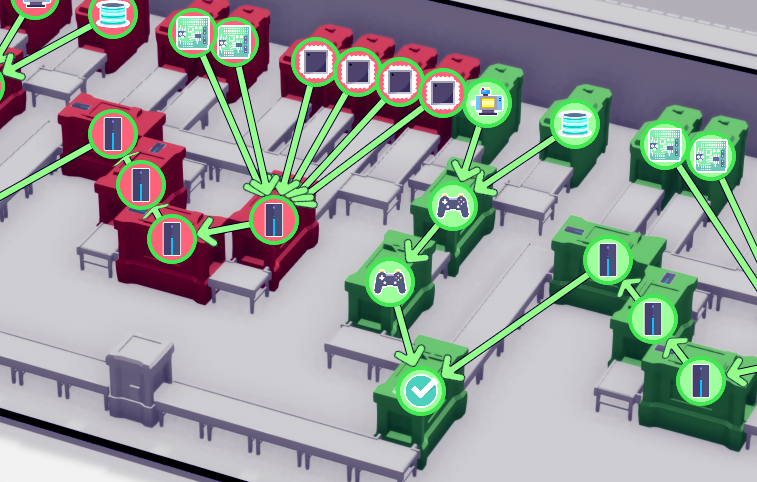 Component printers and assemblers will now automatically be grouped into assembly lines, which should result in less pile ups and I'm hoping it'll make them easier to manage. 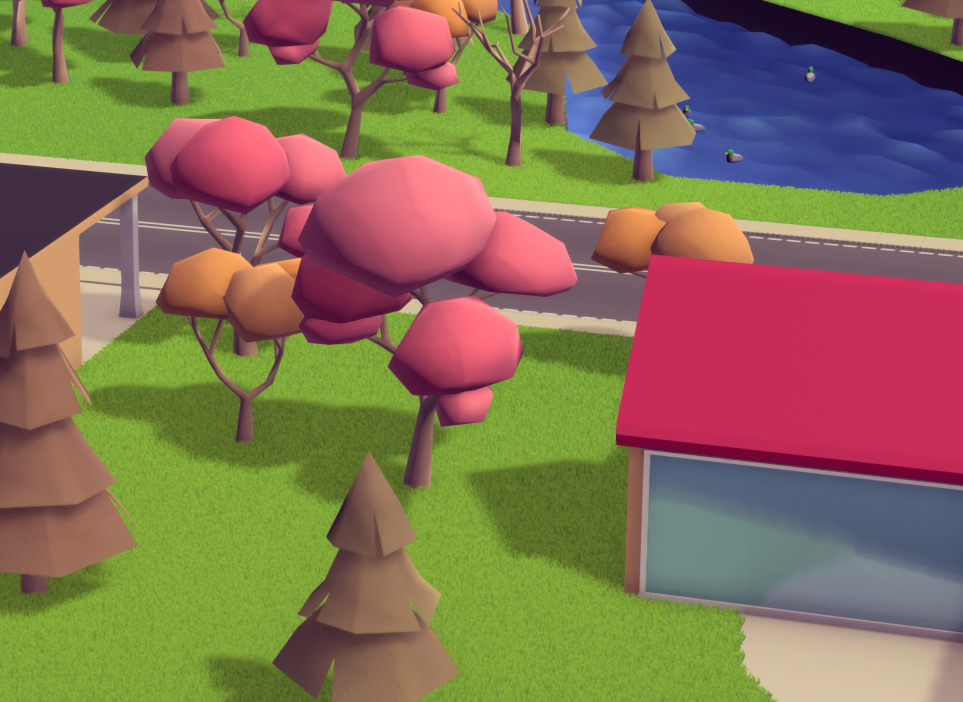