Grab your friends, hone your blades, and set off for adventure in Trove, the ultimate action MMO!
Visit the Store Page
Most popular community and official content for the past week.  (?)
Luxion's First Arrival in August - Lasts until Aug. 10
Aug 7 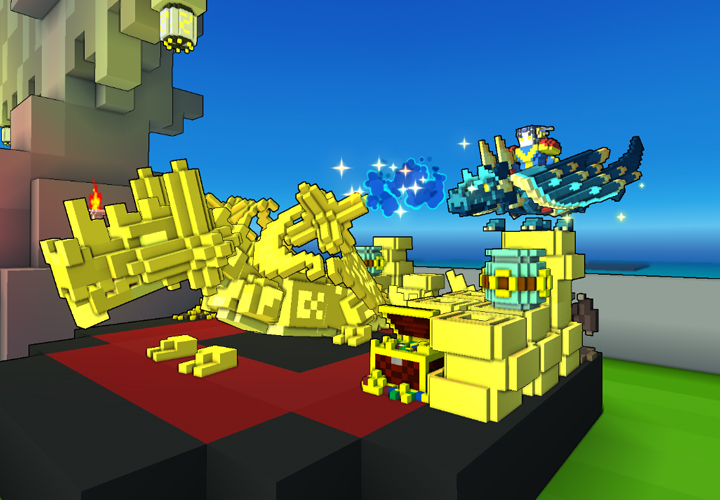 It’s August already and about time Luxion paid a visit to Trove!

Let’s look at what our golden dragon, Luxion, has in store for us during this time of year. 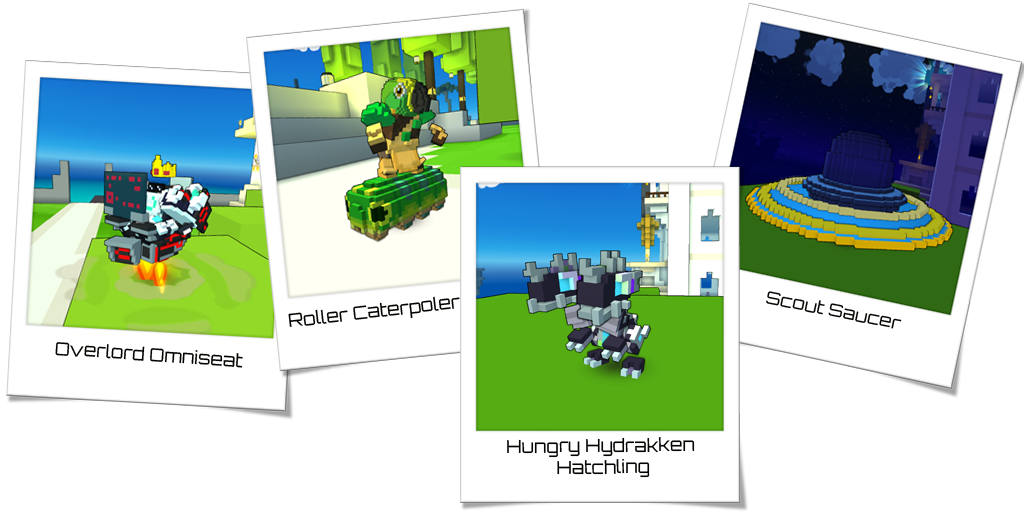 Take a seat and relax in the Overlord Omniseat or roll out with the Roller Caterpoler all across Trove. Luxion has many mounts and an ally this weekend, which ones are your favorite?

Don’t forget to visit Luxion in the Hub from August 7th until it magically disappears on August 10th at 4:00am PST / 13:00 CEST.


What are you waiting for Trovians? Grab your coins and head on over to the Hub!

Luxion’s loot is a way for players who missed limited-time items in the past to pick them up directly. You will also find brand new items at a higher Dragon Coin price periodically. Items will repeat eventually, but it may take a while for a specific piece of loot to return, so be sure to check back on every visit!

Trove
43
1
CAN ANYONE TEACH ME HOW TO MARKET FLIPPING
what items are good for the market flipping in 50k flux and above. and give me some tips and trick to do market flipping, thanks for any tips and advice
2 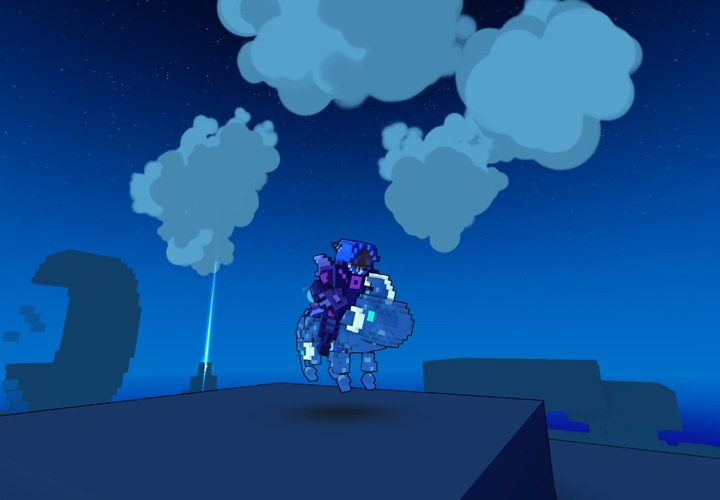 Look to the stars Trovians!

The moon shines bright and the stars have been aligned to Trove this summer. Keep an eye out for special starfall invasions during the Lunar Plunge event from August 4 to August 18, 2020. Curious about what to do? Check out the Lunar Plunge FAQ![forums.trovegame.com]

Qubesly and the Moon Goddess need your help! Beware the shooting stars bombarding the Trove biomes and prepare for many spectacular starry nights that await you. Search and find the falling stars, craft wishing items, and discover an all new pack - Moon Goddess's Goody Bag.


Receive the blessings of the Moon Goddess and take a peak at what's inside this pack for this special occasion. 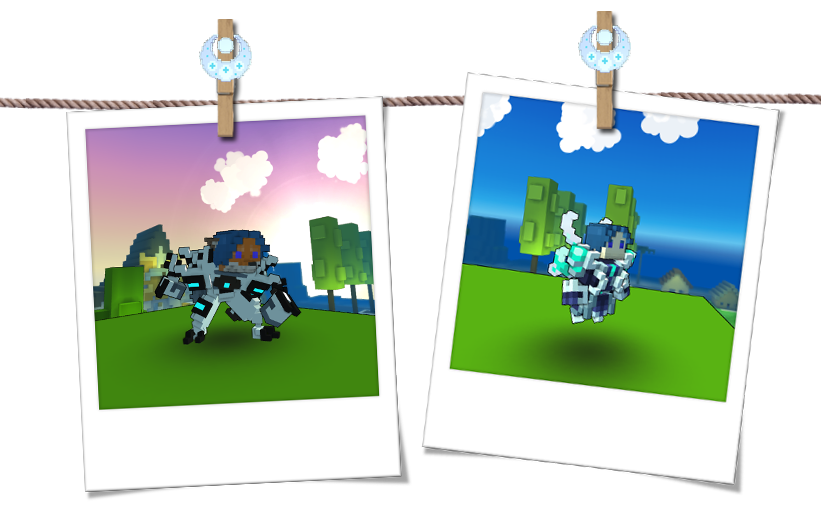 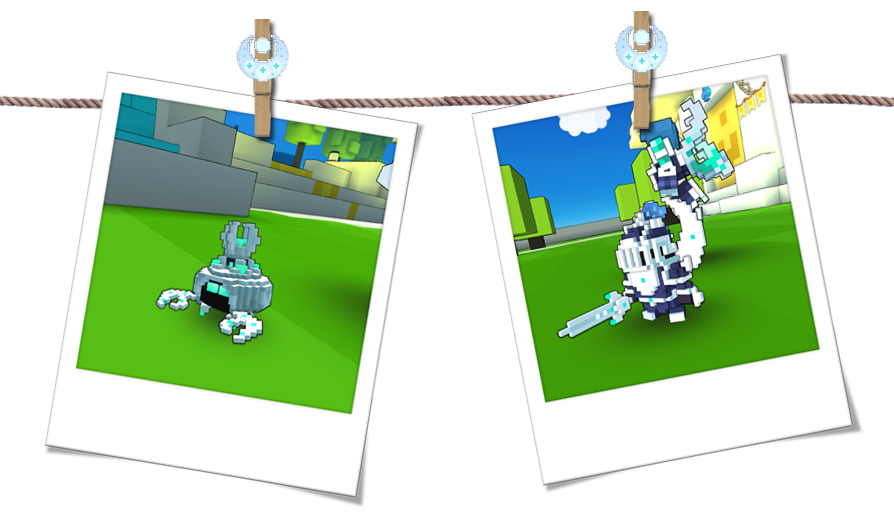 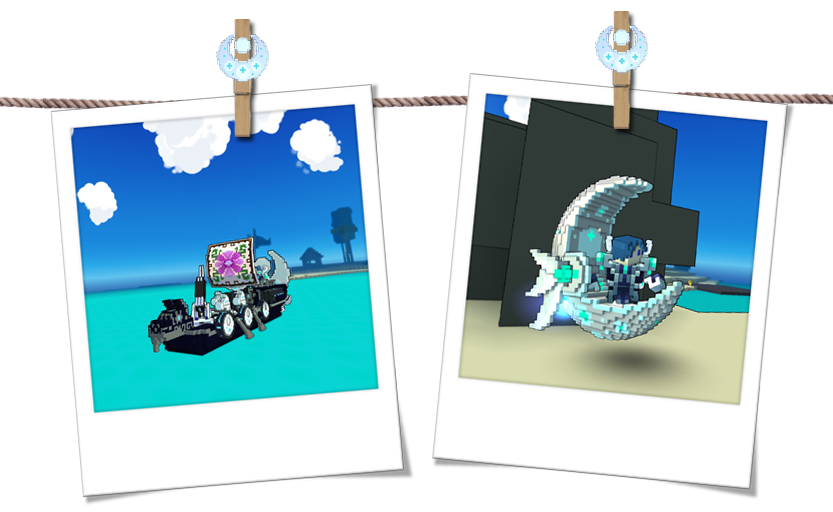 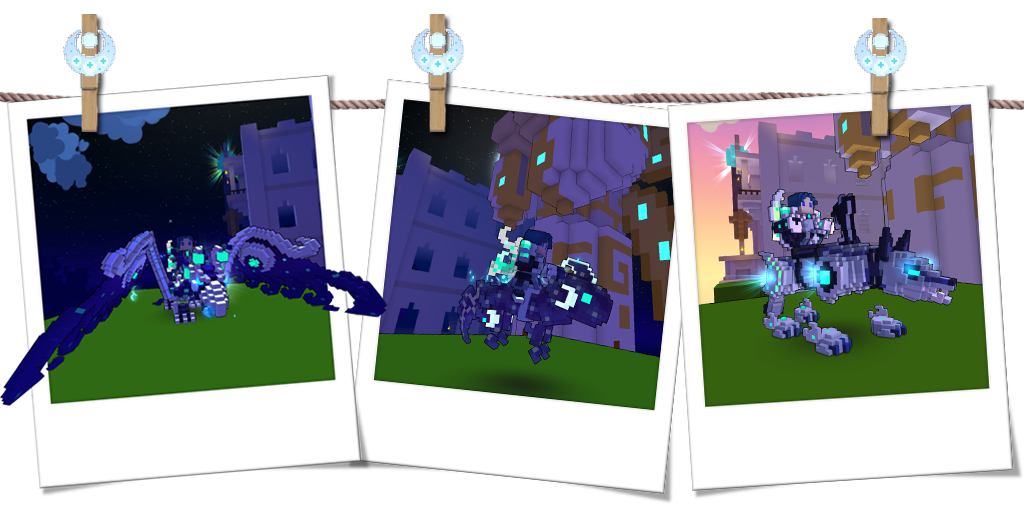 Take the plunge today and reach for the stars!

Have a blast,
The Trove Team 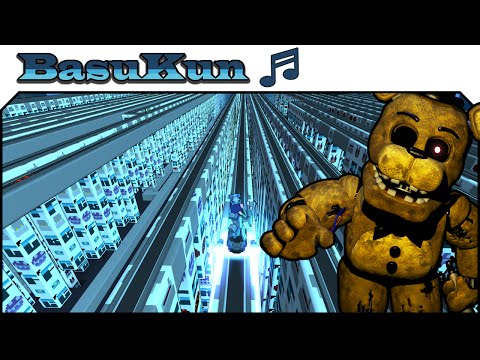 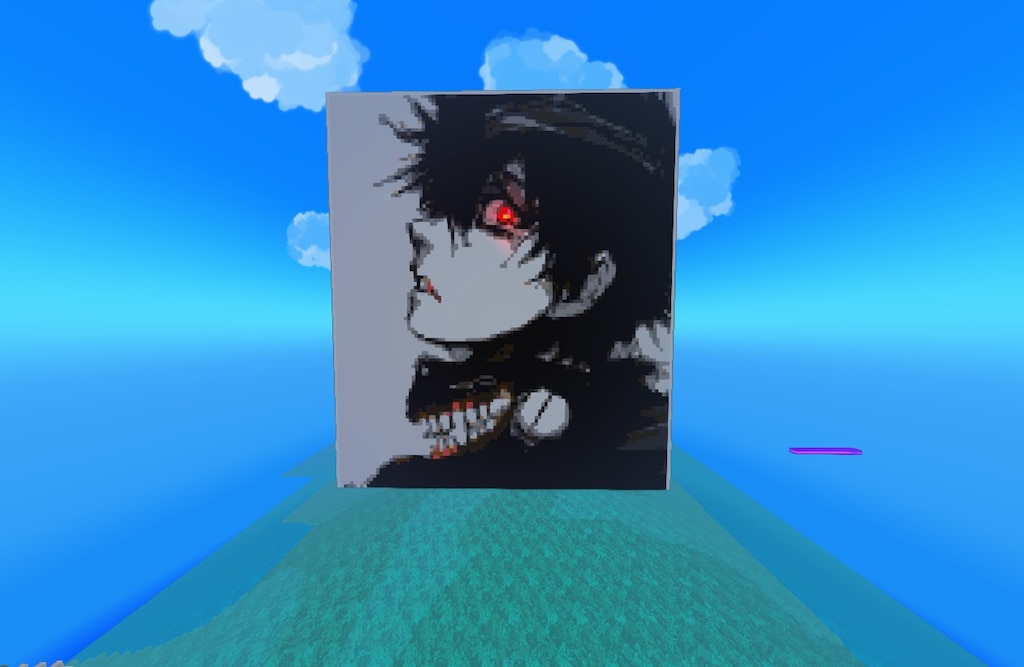 ryZ
View artwork
Luxion is back until July 27!
Jul 24 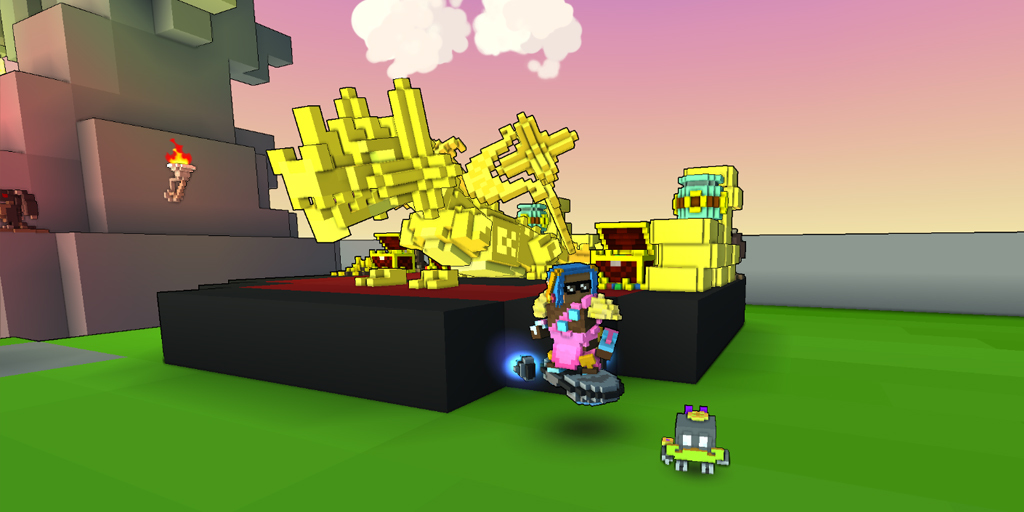 It’s that time of the week for our golden dragon, Luxion, to be back in the Hub!

Not only are there lots of mounts, but Luxion also has an awesome ally and even a mag rider to check out.

Which one will you choose? Or are you going to snag them all?

Discover Luxion near the Dragon Crucible in the Hub on July 24. Don’t miss out, it will magically disappear on July 27, at 4:00am PST. 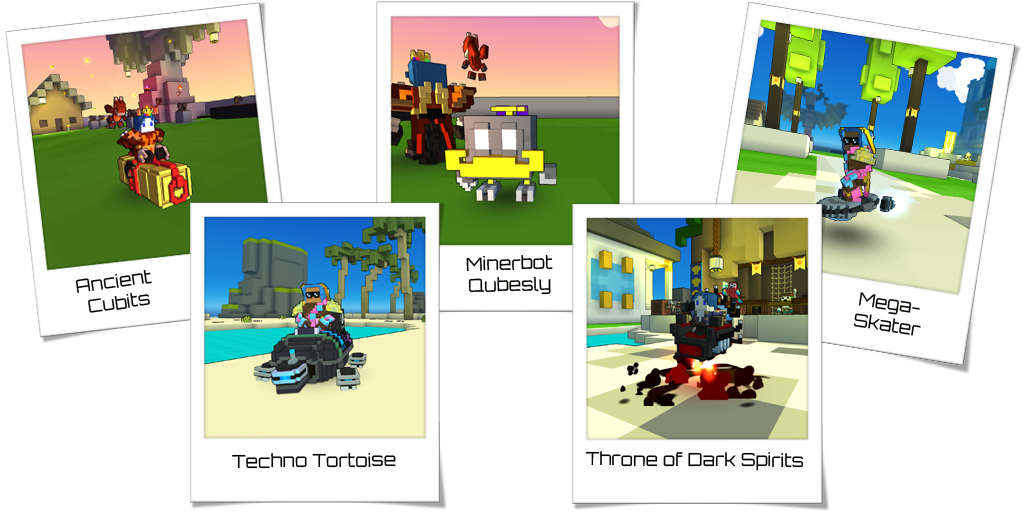 What are you waiting for Trovians? Grab your coins and head on over to the Hub!

Luxion’s loot is a way for players who missed limited-time items in the past to pick them up directly. You will also find brand new items at a higher Dragon Coin price periodically. Items will repeat eventually, but it may take a while for a specific piece of loot to return, so be sure to check back on every visit! 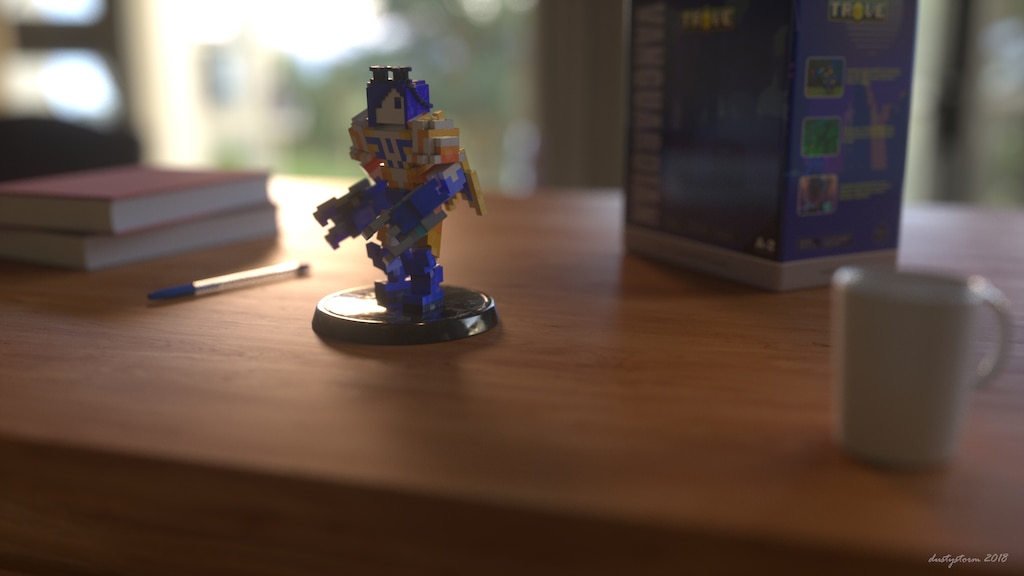 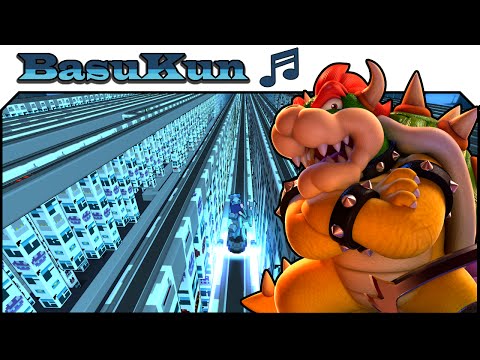 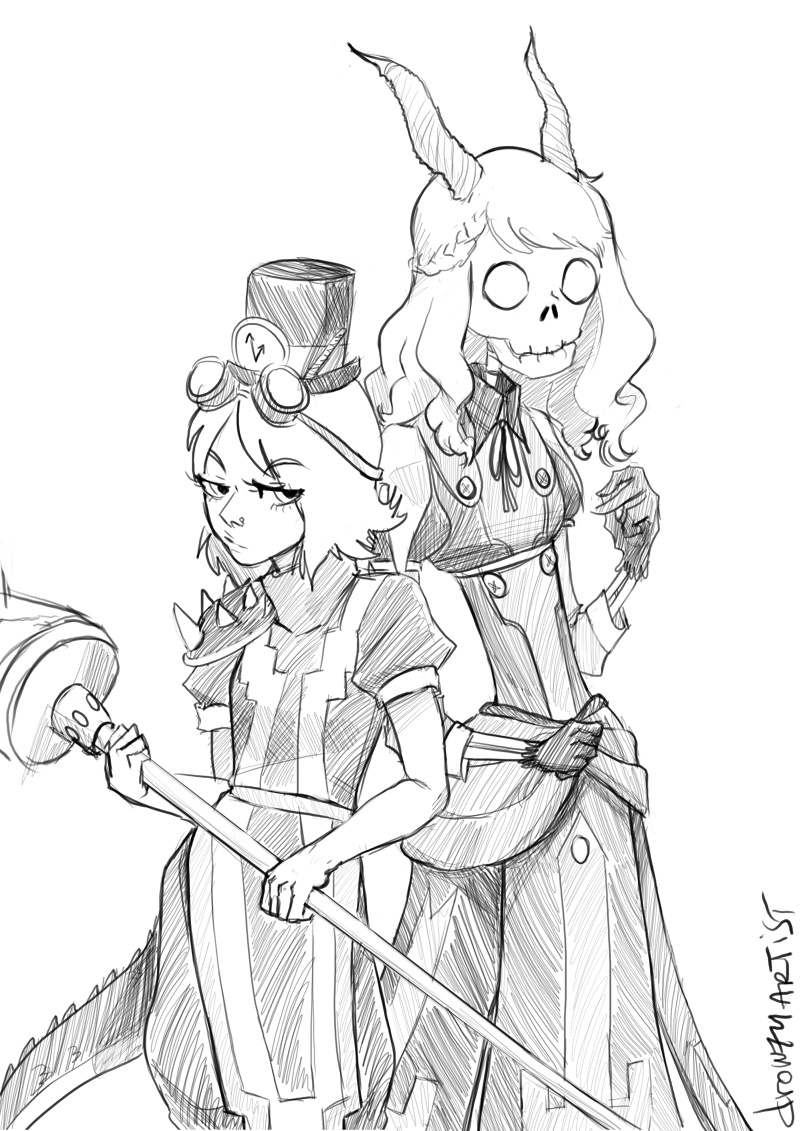 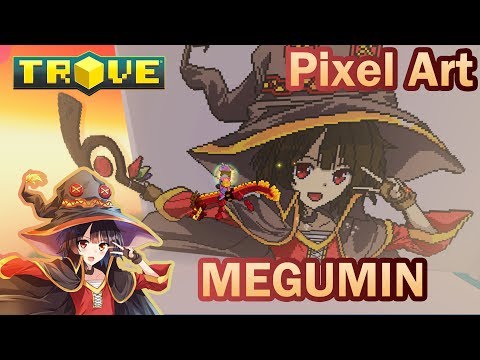 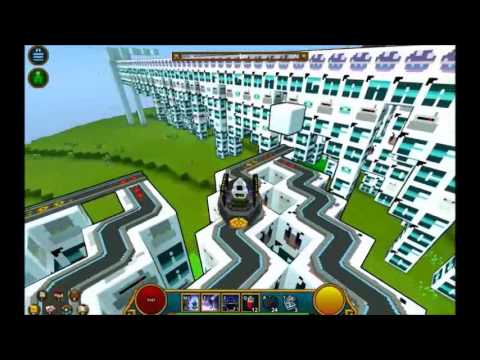 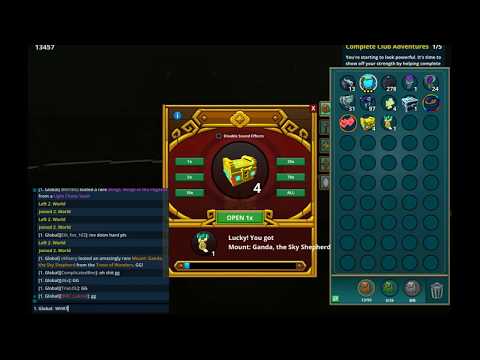 0
8
Ganda has been acquired

Guide on Neon Ninja (Outfit, +/-, gems and аbility) [RUS/ENG] 2018
Neon ninja, this is a mobile class, they need to be controlled quickly, as it is for this and is done in this game, and the pumping will be for a quick move. Неоновый ниндзя, это мобильный класс, им нужно управл

Recommended
637.6 hrs on record
Not like other mmorpgs... relax af 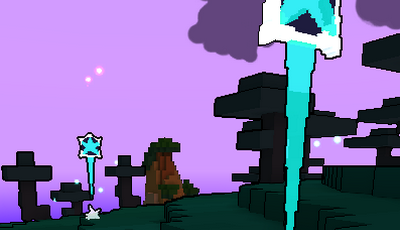 Trovian Lorebook
This guide is all about the lore behind Trove, and the reason why we Trovians do what we do.

Not Recommended
88.7 hrs on record
I have about 1800 hrs in the game and am playing since circa 2015.
I have no intention of condensing my whole experience into this review, however. This is only a short info for any potential new player or 'returning veteran'.

This was a game with huge potential (certainly best Trion studio has ever made). One of the best MMOs of all time.
The golden days of Trove are gone however, there are many problems with the current game. Here are but just a few:

- No end-game content.
- Nothing to do with other players, in-game friends. (Since everyone is so op and there are no new levels of difficulty.)
- Real PvP was removed from the game. (Possibly because developers were too lazy for pvp specific patches.)
- Game was sold few years back, there are no chances of further development. (Anything serious I mean.)
- Not friendly towards new-players.
- Lots and lots of cheaters.

You have been warned.

Not Recommended
2.2 hrs on record
Ignore my playtime. I am confident I have something like 700+ hours on it using the Trion launcher directly . Here's my take:

Gameplay
You go to randomly generated worlds to conquer dungeons that contain loot to make your character stronger. You also do raids (shadow towers) either alone or with people, for loot of course. Get stronger and visit more dangerous higher-tier worlds and do the same thing over and over again. Achieve the highest power possible
For players who want social aspect, I guess its great? You can create or join clans. Clans get their own world where clan members (mostly high ranked members) can build. The global chat is also pretty active. Things can get weird though

- Global and active chat
- In-Game market. No need to exit game to visit some 3rd party market
- Great Combat. Has a very satisfying and smooth feel to it. The animations, weapon/spell VFX, sound, and enemy hurt animation and VFX are on point
- Ran pretty okay on my potato laptop
- Good building simply due to block placing that works like minecraft

- WAY TOO GRINDY! The grind is way too extreme. Unless you literally dont care about progression or your character being good (not in PvP, but PvE!!!)
-Time gated. This game has schedules. For example, mondays have increased chest drop rate, sundays have increased gem rate..etc. I forgot the exact actual correct schedule, but it wasnt a good feature. It was too gamechanging that doing stuff outside of their respective days feels like you're achieving abysmal results. That's just one example. There are other time gated content.
- RNG. Obviously RNG is fine in loot games like these but seriously? This is too much. Good luck opening chests that contain stuff worth a jack ♥♥♥♥. Spend your whole savings to get garbage and negative profit while some other lucky guy gets ganda, a goddamn bird worth 1000000000 flux (In game currency). That's what you trade, mounts and cosmetics which is how they are obtained: lootboxes and crafted using tons and tons and tons of materials
- You have to try to participate in leaderboards. They give awesome rewards...
- P2W? There's barely any PvP but the fact that some microtransactions can help you climb leaderboards.... that gives significant rewards every week or several days based on your rankings
- I quit when Geode update came. I could tell that it introduced a more painful grind. Actually wait, just not 'more' but a whole new level
- Server lags. Its not just me. Its something that even other people complain and make fun of

Honestly there are many crazy people out there who spend too much time on this game in one sitting, or just lots of $$$. It cannot be none of those, IT HAS TO BE one of those, or both

Play this game casually, in other words, for social and building. Dont bother grinding too much! Screw the leaderboards, dont be tempted by the reward it gives! 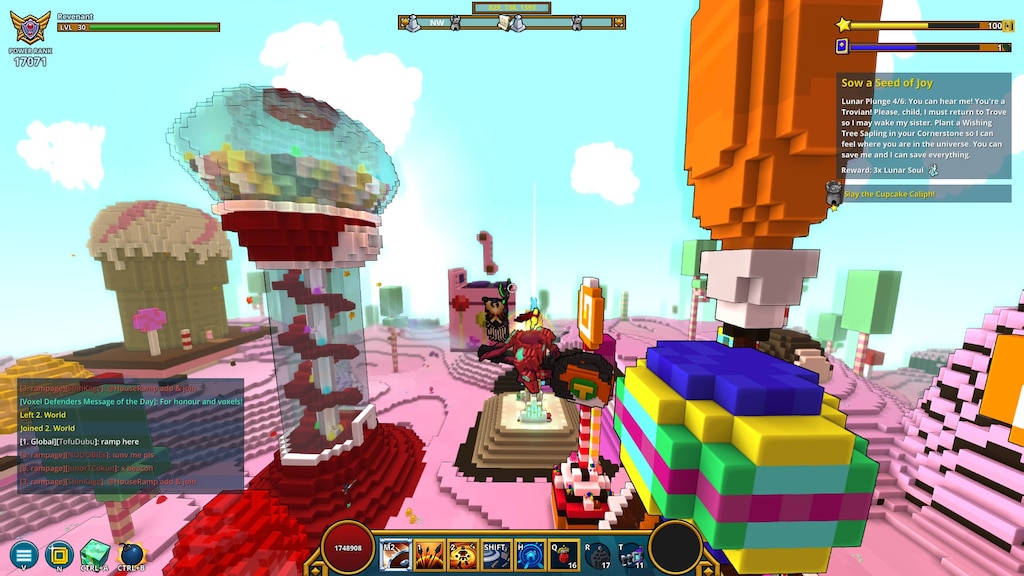 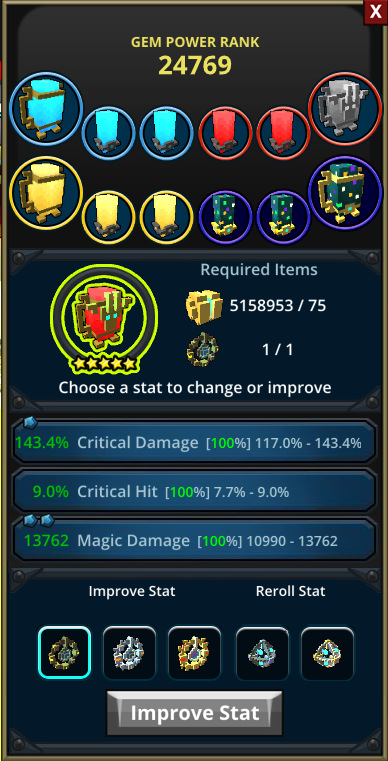 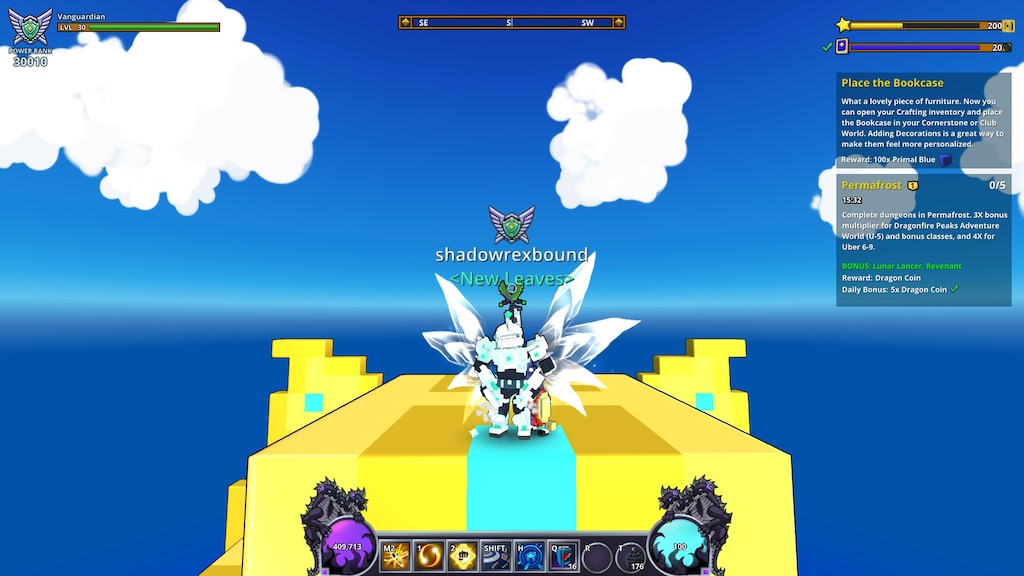 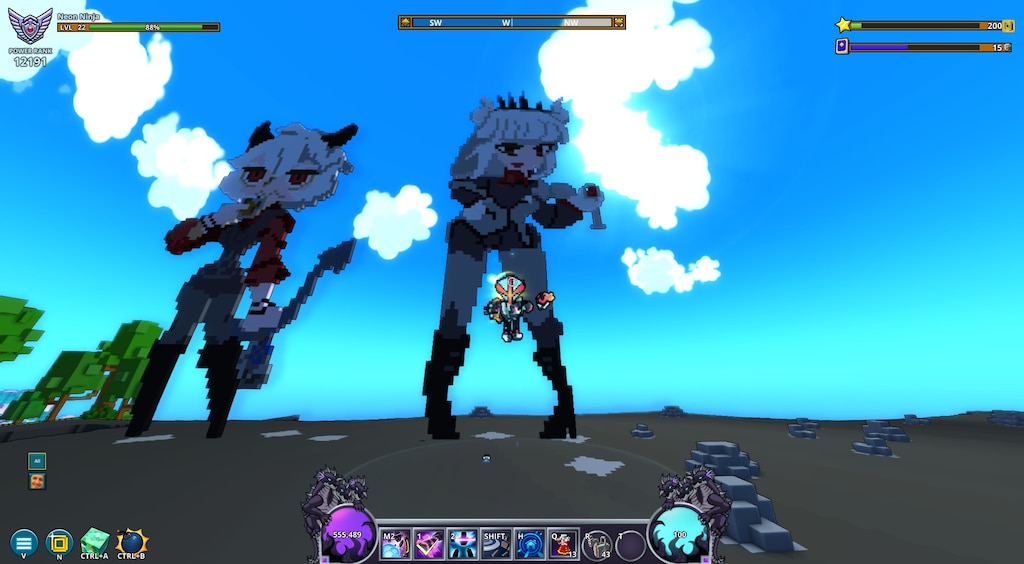 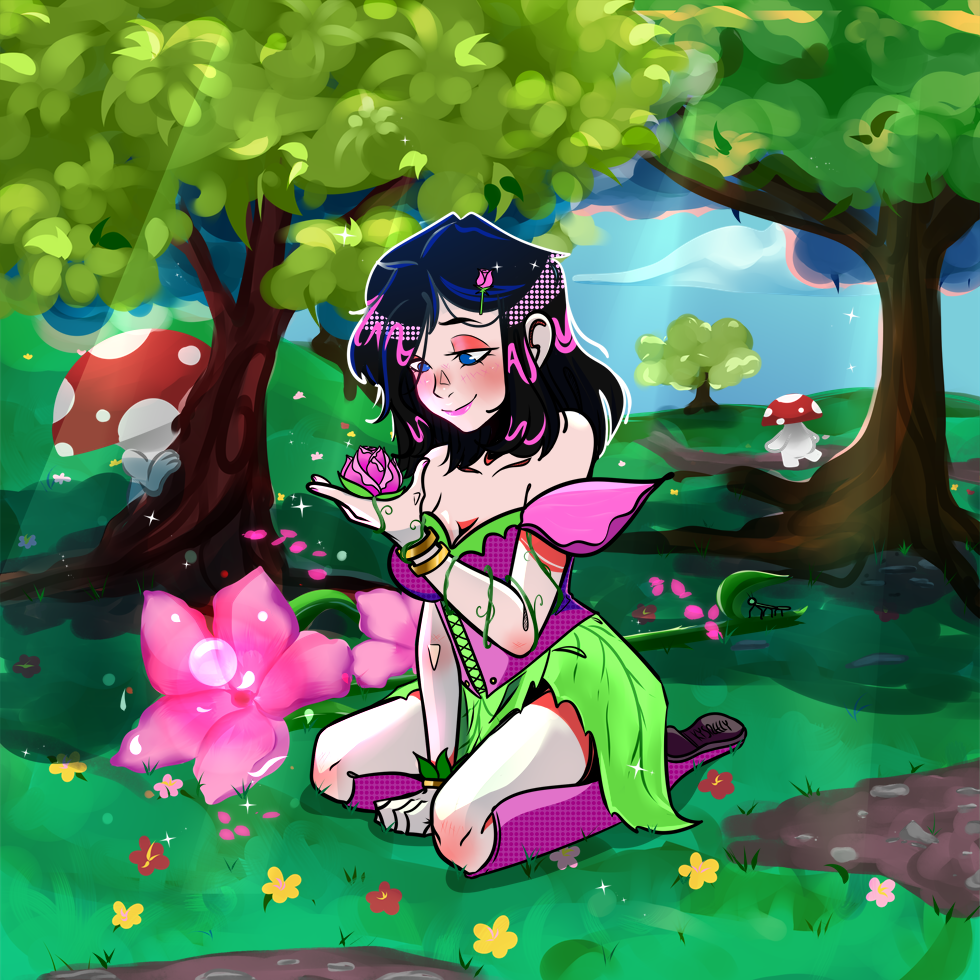 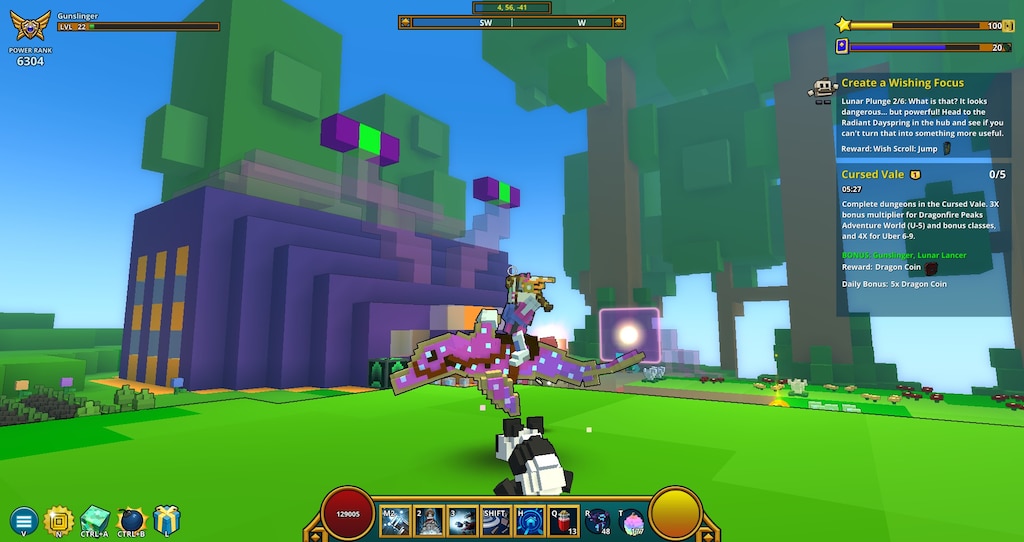 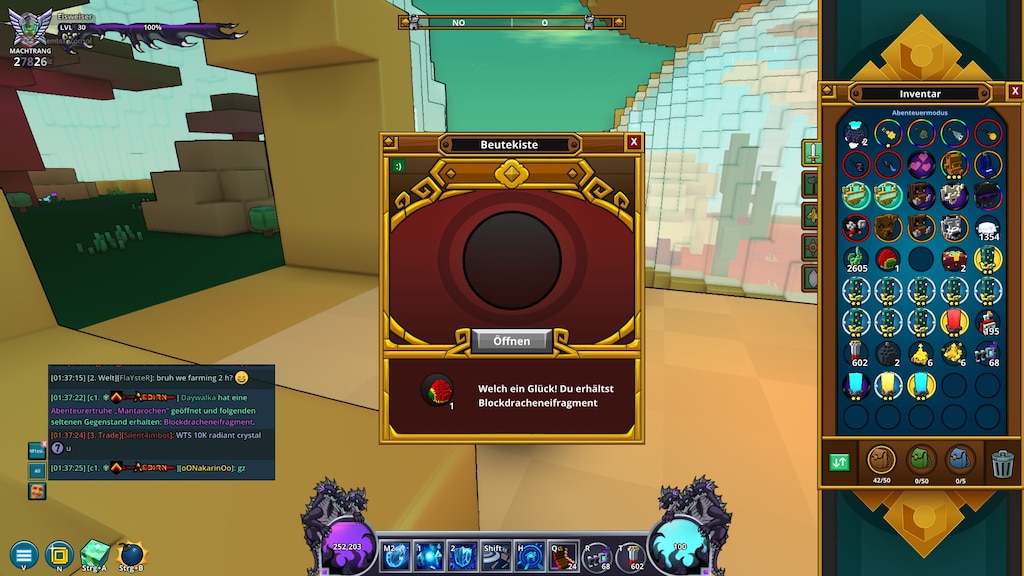 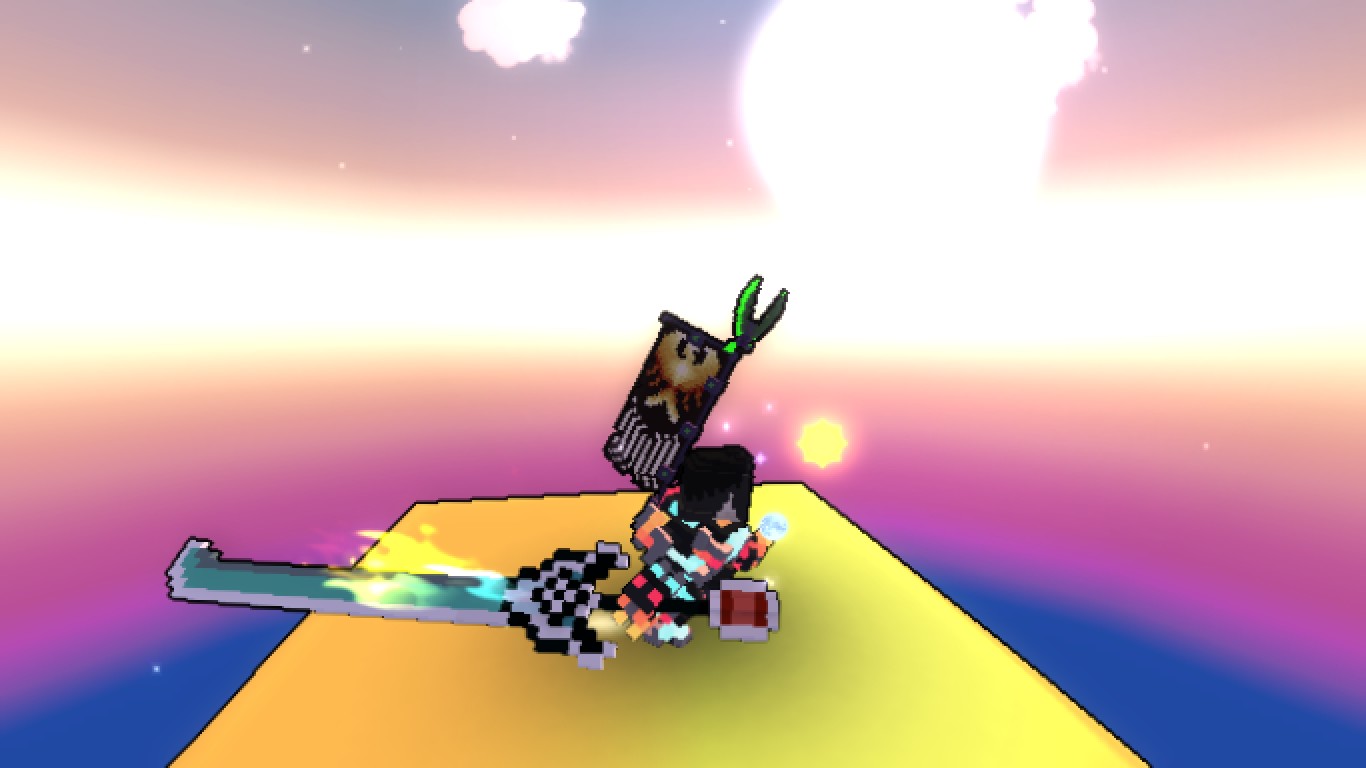 Wtf?
View all guides
How to fix unrecoverable?
I click glyph and message pop up say "Unrecoverable error occurred. Please reinstall Glyph." and I follow guild finally it can't fix it. please help me.
2

Bokchoy
Aug 8 @ 10:16am
General Discussions
Can I somehow reduce Gunslinger effects?
Hello, when I playing as Revenant, its really painfull for eyes when I see how Gunslinger uses his skill with class gem, flashes for the all screen. Any mods or something?
6

KAT_Editor
Aug 9 @ 3:25am
General Discussions
Let me rate it.
My overall rate: 9,25. - Based on the ratings below. My ratings individually: Requirement: 10. - Does not require a powerful "machine" to run, especially if we take into consideration what it provides as a video game. Entertainment: 9. - This is the most subjective rating, do not rely much on it. Playability: 8. - Only 3rd person view, problematic in small space. Replayability: 8. - I might be wrong, but a player has just one safe place to build, with a size of 16 x 16 x 200 (width x length x height)...
7

InSaNe_97
Aug 4 @ 10:46am
General Discussions
Is this game dying and/or worth going back into?
I used to play it back in 2016 and Im just wondering if the playerbase is still holding steady and if I would still find this game enjoyable today. I heard it changed for the worse so I dont know if I wanna bother installing it. Thanks
23