Store Page
View Stats:
Global Achievements
Show
All News
All News
Syndicated News
Official Announcements
Sunlight is out now!
Jan 14
Sunlight is finally out in the world. It has been a strange project to work on, especially since it’s been developed in isolation during a very strange time. It’s always scary to share work, but when people seem to like it it’s also super rewarding!

Everything is connected, and Sunlight is no different. For every copy of the game that is downloaded, a tree will be planted.

Among the Sleep
38
0
Our new game Mosaic is out today!
Dec 5, 2019
When we released Among the Sleep five years ago, we didn't really know what our next game would be, we only knew that we wanted to make something completely different from Among the Sleep.

That game turned out to be Mosaic.

It's a very different game from Among the Sleep. In Mosaic you play a disillusioned office worker living in a dystopian and dark version of our modern society. You are a tiny part of a complex and ungraspable huge machinery. You have no direction in life, no influence and feel alienated and alone. Whereas we tackled horror from the perspective of a child in Among the Sleep, Mosaic is more about horror seen through the eye of an adult tackling our modern lifestyle.

The development of Mosaic has been a long and complicated process for us. We signed on with publisher Raw Fury last help to get assistance and help to wrap this game up. And now it's finally done. It's out and released. Available on Apple Arcade, Steam and GOG.

If you liked Among the Sleep and/or The Plan, we hope you will check out Mosaic. We feel that we have put a lot of ourselves and our identity into the game. It's a very personal story about humanity, society and life. And we are so happy to be able to share it with you.

Last week we celebrated five years of Among the Sleep here in Oslo, Norway. We threw a big party for the Norwegian game industry, with donuts, prizes and Marioke[www.singmarioke.com]. 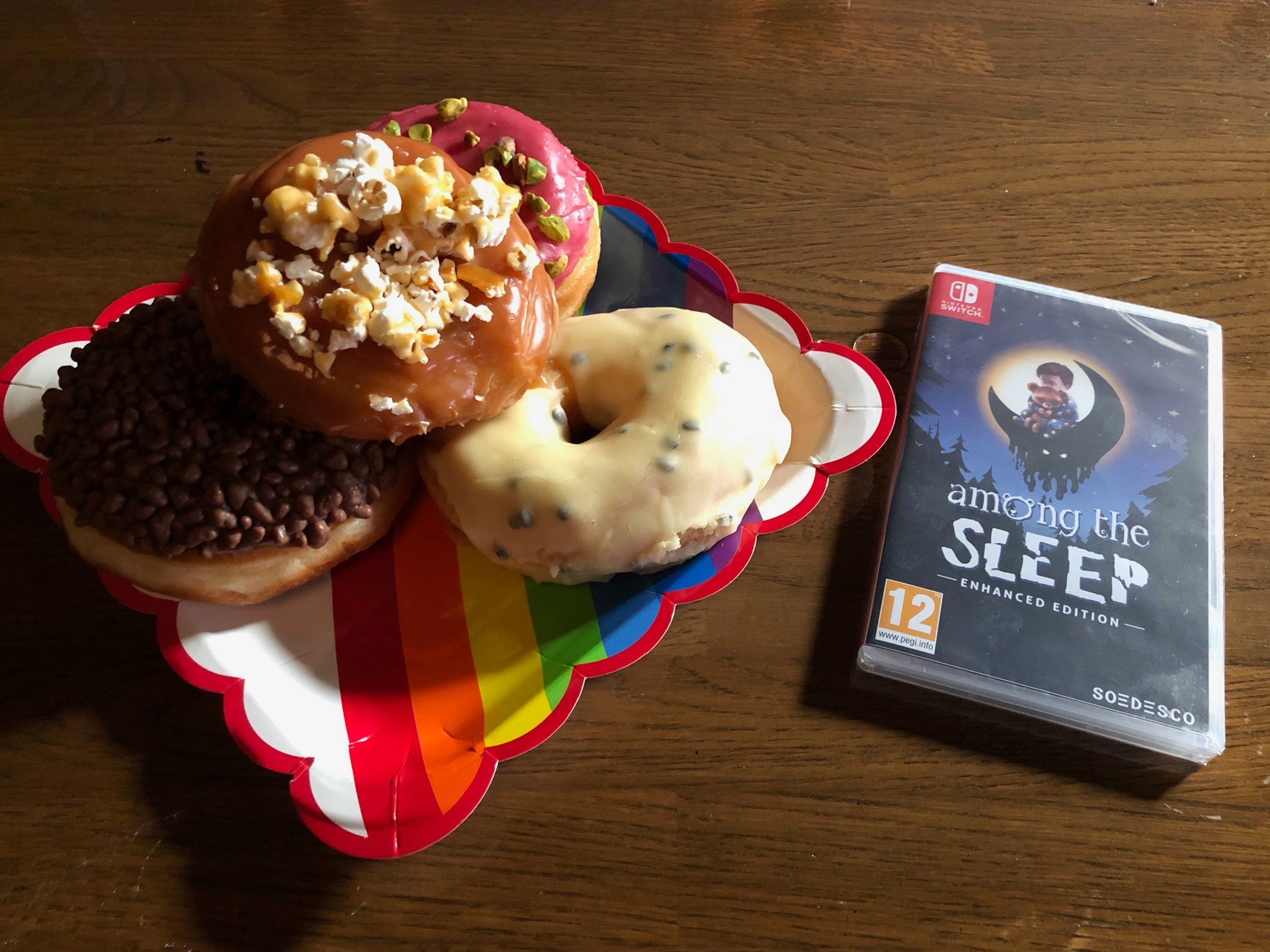 It was a wonderful evening, and also a very humbling evening for us to see so many of our friends, colleagues and partners who came and partied with us. We are so thankful that so many people have enjoyed our game. Thank you each and every one of you who have supported us.

We also had a studio visit from Soedesco, who have helped us port and publish the game on Switch. They're also the publishers of the physical editions of the game, and they did an interview with our CEO while they were in Oslo. Check it out here:

We can't believe it's been almost five years since we released Among the Sleep. A lot has happened in that time - we have made a new game called Mosaic that will be released very soon, but we have also ported Among the Sleep to many different platforms. The last one out is the Nintendo Switch. With the help of the wonderful people in Soedesco Among the Sleep will celebrate it's fifth year by debuting on Nintendo Switch May 29. Here is a video showing what the game looks like on the Switch:
https://youtu.be/clcdFmrUUWc

To all those who have bought and played the game - thank you very much from the bottom of our hearts.

Among the Sleep
45
3
New language patch!
Jun 7, 2016
Change-log for Among the Sleep version 2.0.1
- Added text translations for the following languages:
- Fixed the AI sometimes falling through the ground in the forest level, confusing its re-spawn logic.
- Fixed some out of control rope physics.
- It's no longer possible to use resolutions narrower than 800 pixels, unless it's the only valid resolution on your computer.

Since last time we’ve upgraded to Unity 5. This was a very substantial upgrade that changed parts of the game’s structure so that we had to find new solutions to various problems. Some of these are more or less noticeable than others.

The biggest changes are the ones affecting performance. We’ve been very hard at work to make the game run a lot better, increasing frame rates and decreasing loading times, especially in lower end computers.

We’ve also added a commentary track where you can get a bit of the developer’s thoughts about various aspects of the production. By turning on the commentary track in the options menu, you will find commentary nodes throughout the various chapters. Walk up to them and give them a click to hear our lovely voices talking about video gamey stuff!

Important notice: Your old save files will not work with the new updated version of the game. You can keep using the old version of the game by opting in to use the development branch on steam. You can also use the console to unlock chapters. For more information, see: http://www.krillbite.com/2016/02/17/major-steam-build-update/

Among the Sleep
119
35
The Norwegian Patch - we've got Æ - Ø - Å
Feb 10, 2015
Among the Sleep Patch v1.3.2 out!
This patch is mostly a bonus for our fellow countrymen, as it adds Norwegian voices for the entire game, and in addition Neo-Norwegian subtitles, our second official written language!

For full patch notes, see below:

Among the Sleep
42
14
Among the Sleep patch v.1.3.1 - and demo for Mac and Linux
Dec 3, 2014
Heya! What's good folks?
We're here to bring you the new patch notes and tell you a little bit about the current status here at the studio.

We've finally fixed the demo version of the game for Mac and Linux, which should now be available for download. We are aware that there have been Mac and Linux users reporting issues with playing the game, so any feedback on how the game is running now will be greatly appreciated!

It's been a few weeks since the release of the DLC and we hope you have been enjoying it. We had great fun creating it, and it was very interesting to develop it alongside the feedback of some of our backers.

Since then, we've started working on a brand new project. We're super excited about it, and we're looking forward to sharing it with you some time in the near future!

The future of Among the Sleep
The current focus on AtS is porting it to the Playstation 4 console. The development is coming along nicely, but it's a bit too early to estimate a release date. There's still some challenges to overcome, as there are completely different requirements for a game to be released on PS4 compared to PC, so it's a lot more complicated than just building it. We hope to have this ready as soon as possible, as we're very excited about seeing our game on a console!

We're also working on implementing and finishing the support for Oculus DK2. As AtS is on the wave of the first games that is being developed to support the new VR technology, we're bumping into problems that takes a bit longer to solve as there's not many resources of information to look up about it yet. We're loving what we're seeing so far, AtS in VR is an amazingly immersive experience. So hold on to your VR headsets a little longer!

Optimization is a big one we're currently working on, which has a direct connection with both the PS4 and DK2.

We've been working on this extra little bit of the game along with our Kickstarter backers since release this summer. The free DLC contains a whole new chapter, which is meant to be played after the main game is completed (as it expands a bit on the main story). We've conveniently named it "Prologue", so for those of you who've finished the game and long for more: enjoy!

It should update to your copy of the game automatically, and can be accessed from the chapter selection screen in the main menu.
For the Linux people we have to apology since we met a breaking bug which we're sorting out. We should have that sorted and up by Friday.

Get a feel for the new setting in the DLC teaser: https://www.youtube.com/watch?v=y8ZW48s42Wc

On the horizon
We're continuing to develop the PS4-version, and adding support for new features (such as the Oculus DK2-support). We’ll also continue optimizing the game in general (like the IPD/FOV-issues on Oculus DK1 sets) and fixing all the bugs we find. Please keep sending us bug reports, as they help us track them down easier.


- Love from the Krillbite team

Among the Sleep
38
15
Free DLC out next week!
Oct 31, 2014
Since release this summer, we’ve amongst other things been working on the Free DLC, that was one of our stretch goals. It is very close to finish, and will be released next week, on wednesday 5th of November! Please enjoy the teaser added to the Among the Sleep store page, or on youtube following the below url!

Thank you so much for all the backers who chose to participate in shaping it. We hope it will add much of what you wanted to explore more on from the main game, and we’ve had a blast developing it with you! For those of you who have yet to play the main game, we recommend finishing that first, as the DLC expands a bit on the main story.