Congratulations. The October labor lottery is complete. Your name was pulled. For immediate placement, report to the Ministry of Admission at Grestin Border Checkpoint. An apartment will be provided for you and your family in East Grestin. Expect a Class-8 dwelling.
$9.99
Visit the Store Page
Most popular community and official content for the past week.  (?)
Invisible Update Incoming
Nov 26
As part of porting this game to phones[dukope.com], I re-wrote most of the code in Haxe and switched from OpenFL to Unity as the core engine. That's worked ok so far on phones and now it's time to transition the desktop builds to this new version. This is intended to be a mostly invisible update on desktop - no content changes and no loss of progress. Still, the fact that so much has changed behind the scenes has made me cautious.

Beta Testing
Version 1.4.4 covers Windows/Mac/Linux and is now available on the preview branch[http//%26quot%3Bhttps]. If you're feeling brave, please give this version a try and let me know if you notice anything different or run into any problems (in the comments here, on Twitter @dukope[http//%26quot%3Bhttps], or through the support form[http//%26quot%3Bhttps]). I'll move this build to the main branch after building a little confidence.

What's New
Content-wise, all platforms and versions are as similar as possible. Some notable changes from the currently-available 1.2.76 to 1.4.4 on desktops:

What May Break
Some things that may not work right:

WARNING
This 1.4.4 preview build has not been tested extensively. I recommend backing up your savedata[http//%26quot%3Bhttps] before switching to the preview branch. 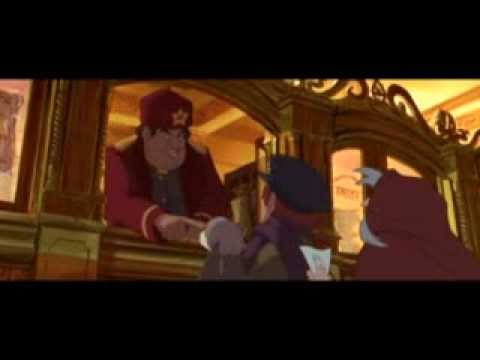 5
145
How to play Papers, Please properly 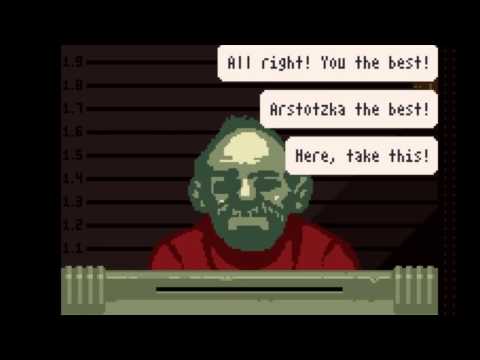 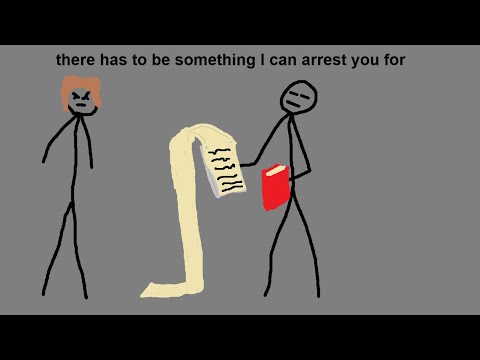 6
2
Papers, Please but I'm really bad at my job 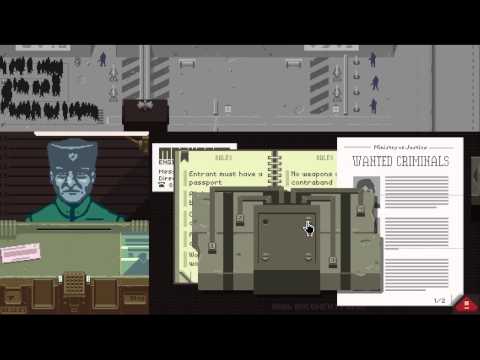 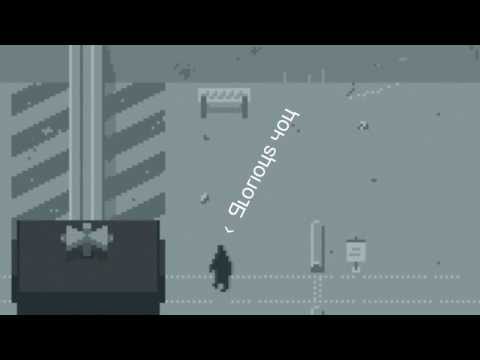 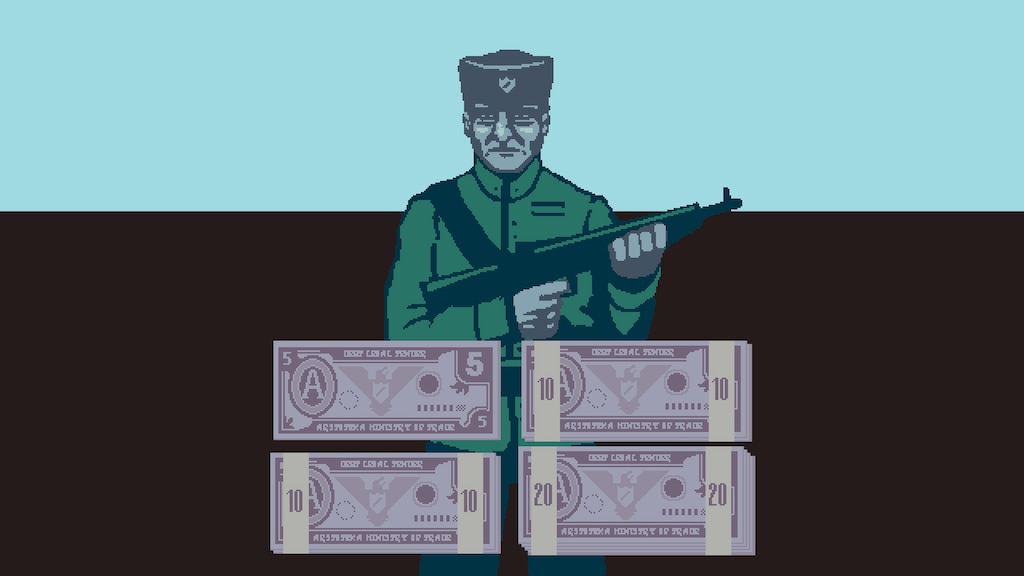 ALL ACHIEVEMENTS QUICKLY AND EASILY
I will explain in detail how to complete all the achievements of Papers, please in a simple and fast way.
56 ratings 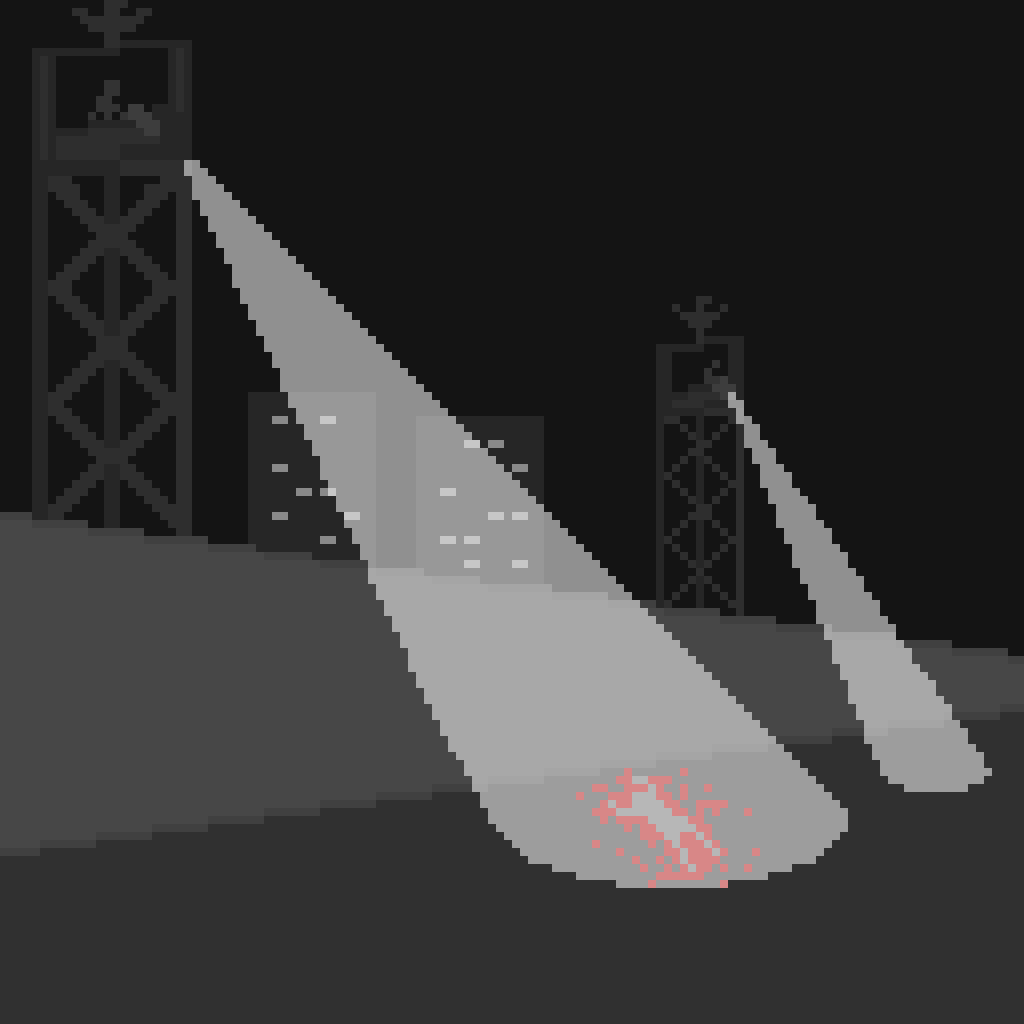 Recommended
14.9 hrs on record
I played this game a while ago and wasn't very invested in it. I got it back recently and have completed the game multiple times. At the time of writing this review I plan to complete this game again. The reason I am able to play through this game is for the following.

1. This game has multiple endings.
Within Papers please The game has over 20 endings which makes choices that you make effect the outcome of your ending.

2. This game teaches the player well.
When new documents are introduced the game does not throw you into the deep end but cleverly allows the player to understand how to read/check each document before allowing the player to fail.

3. Soundtrack
The music within this game is well made that to this day I could boot up the game and feel like its the first time I have heard it.

If I could wipe my mind and play this game again I would. Being able to learn how to correct each document and seeing the attacks for the first time would be something I wish I could experience again. 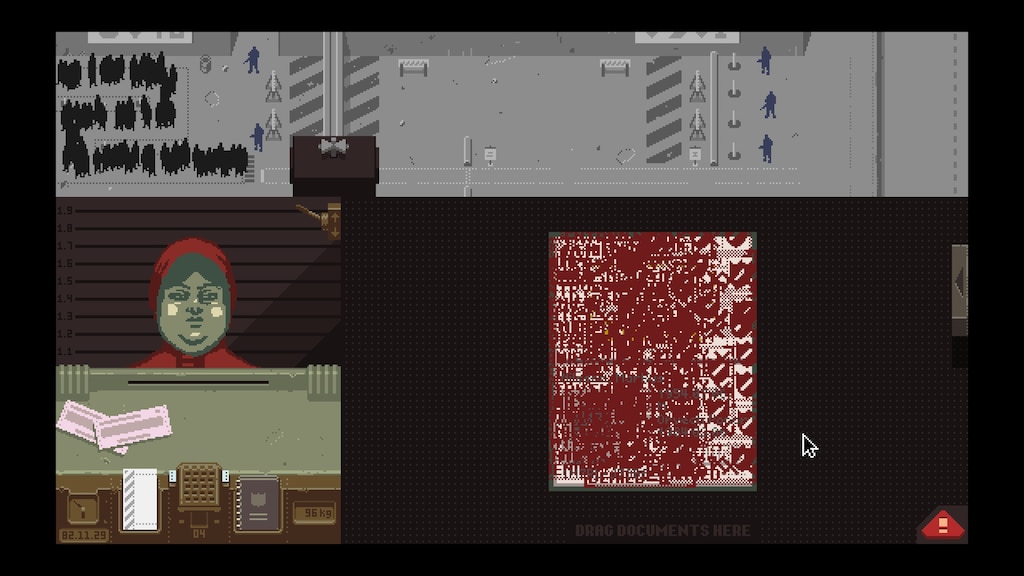 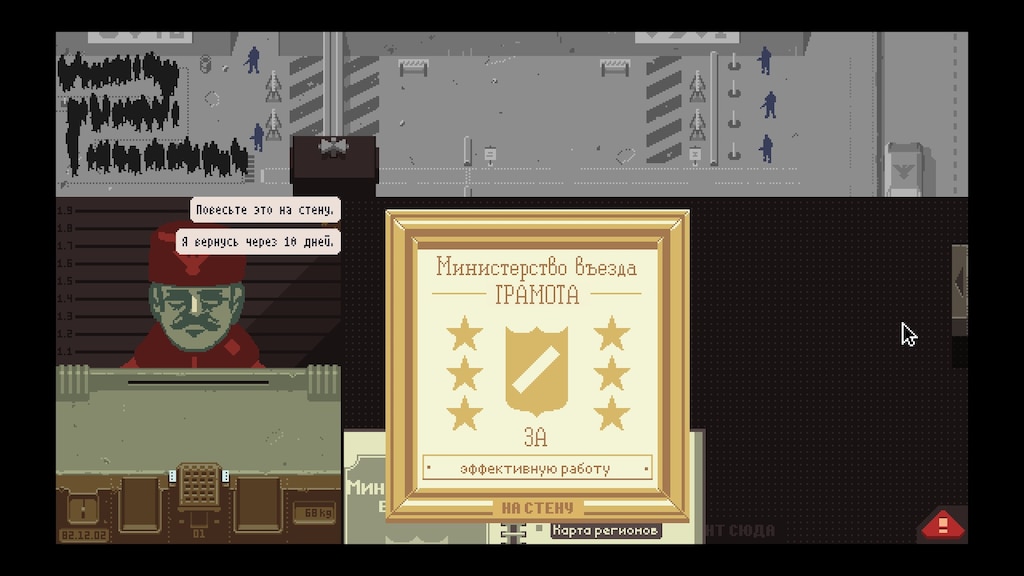 Recommended
21.2 hrs on record
Beware of Jorji, he is a drug dealer from Cobrastan who sells drugs to children, shoot him on sight.
Glory to Arstotzka! o/

Recommended
11.8 hrs on record
Win a lottery and get to work as an inspector of Grestin border checkpoint!


What to expect:
- Safe working conditions under the watchful eye of your fellow countrymen;
- Good daily salary enough to meet all your family's needs;
- Modern document verification methods to make your job a lot easier;


Requirements:
- Be modest Arstotzka citizen;
- Have healthy Arstotzka family;
- Be willing make Arstotzka proud;
- Be not "Jorji" and "Costava" in any way;


You think you fit right in?
Get this product and serve Arstotzka right!


- This review was written by Arstotzka Ministry of Information (M.O.I.) - 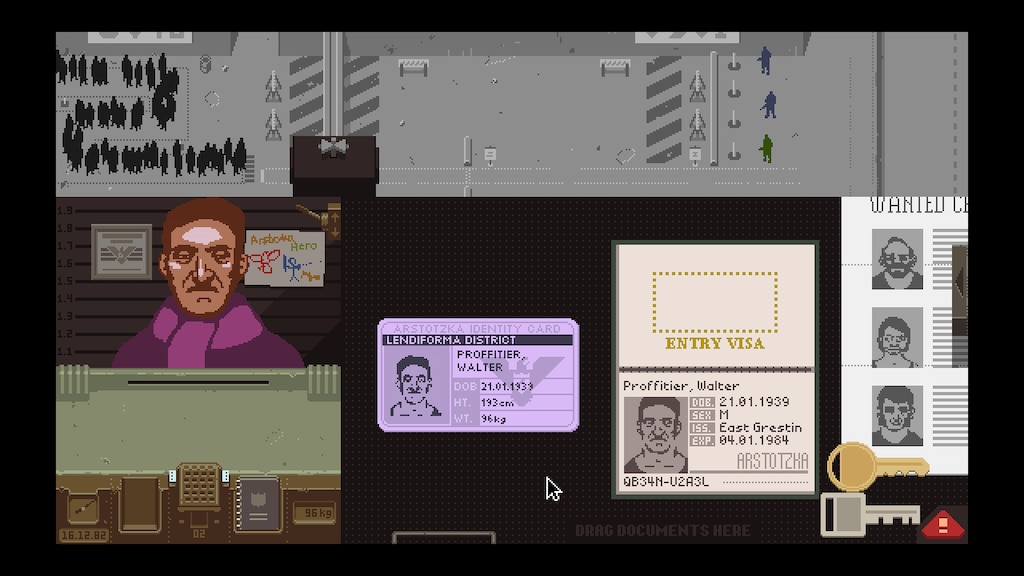 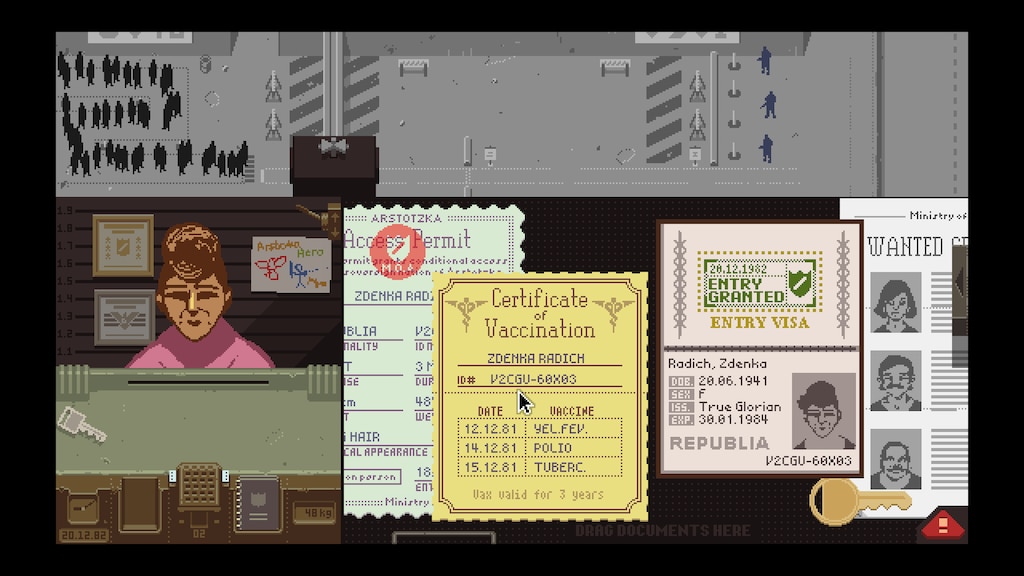 OfficerBrainfart
View artwork
this game is boring
why do ppl praise this game so much its the most boring thing ever.Its just the same thing over and over and its hard,and if ppl say it about the story line its not good ether all there is are a few ppl who come back like 3 times trying to get in,an occasional event and that's it, its just not fun and i wish i could get a refund!...
96 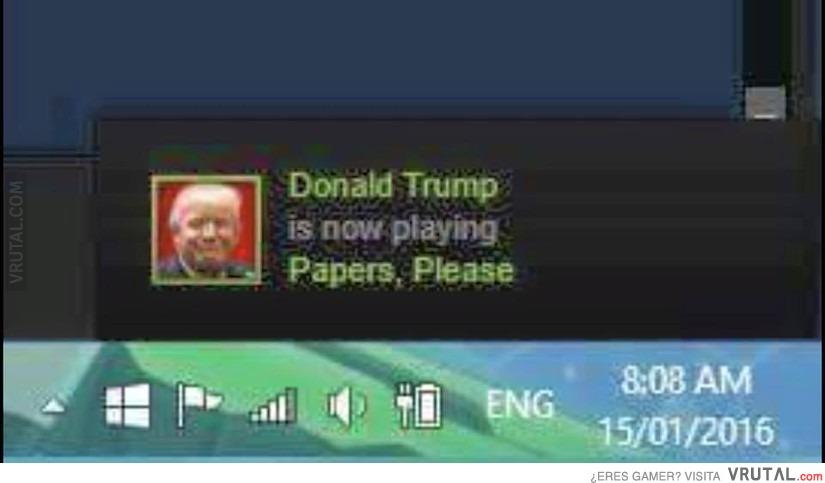 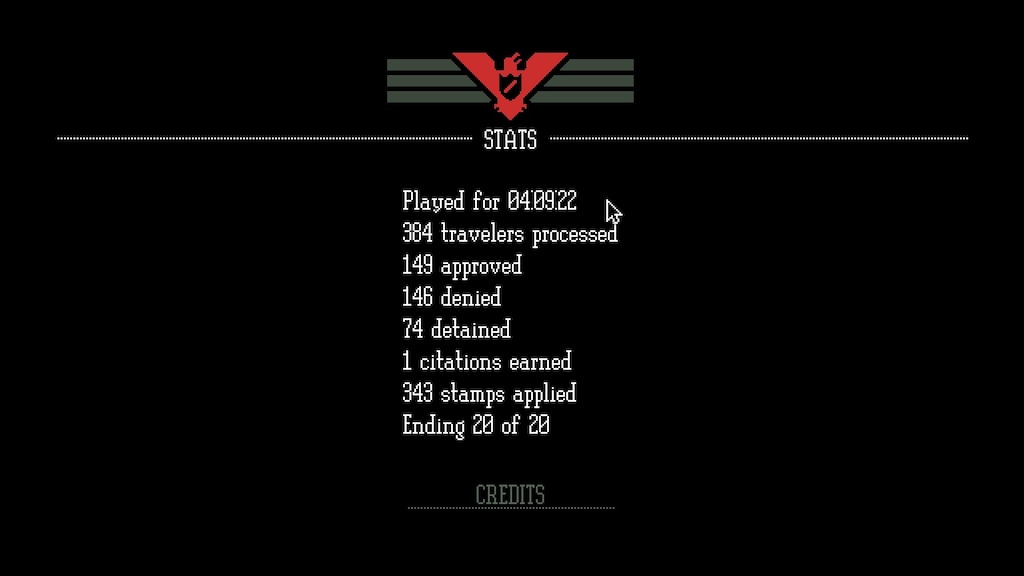 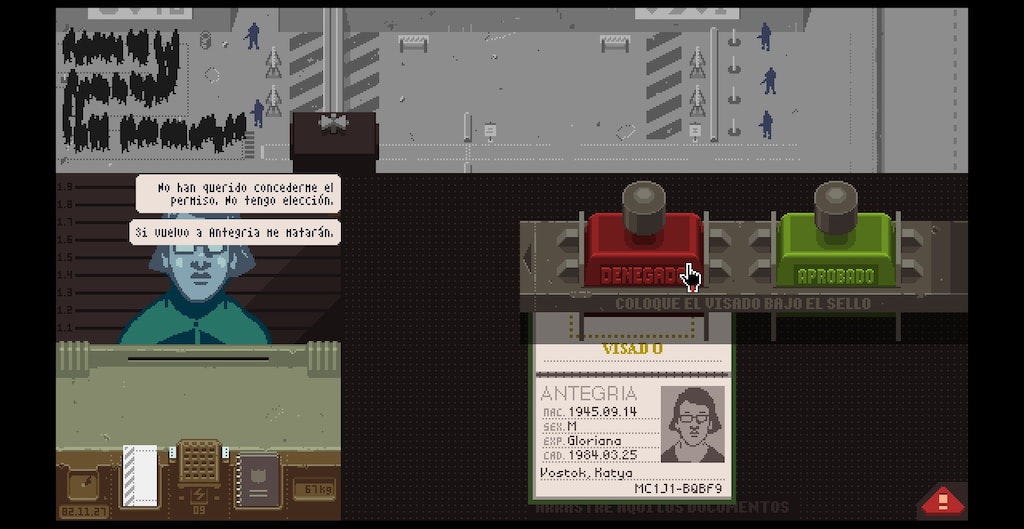 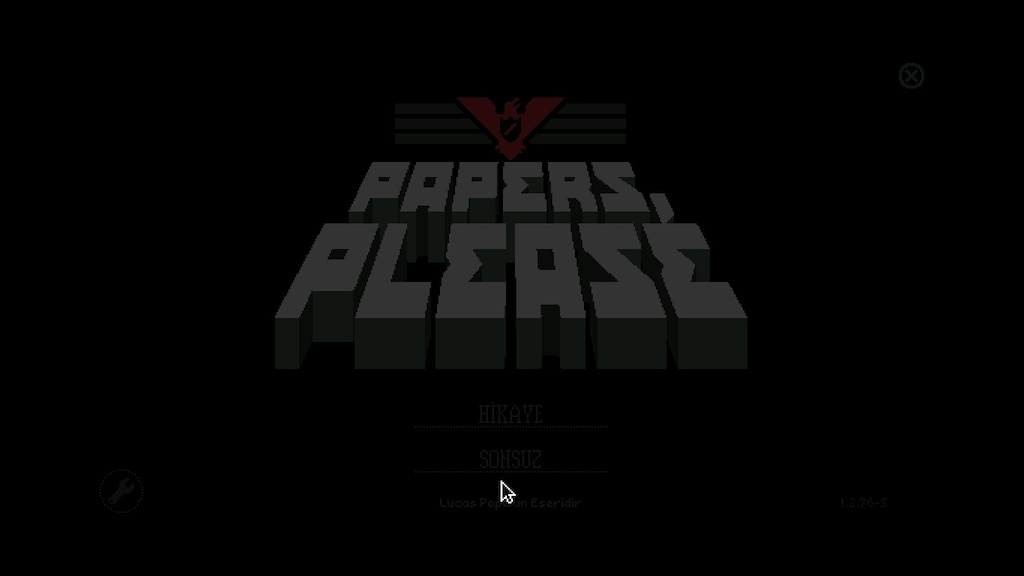 ege01
View screenshots
Mouse Cursor Too Big In Game?
Title. Enjoying the game so far, but the mouse is way too big for some reason, most likely due to the resolution. Tried different Windows scaling options to no effect, as well as all native resolutions up from 720p to 4K (I am aware the game renders at a lower resolution). If I had to guess, I'd wager the game's running around a widescreen version of 480p. My mouse cursor is already as small as it can get in Windows. Playing in Fullscreen, capped at 60 FPS through the Control Panel, with ULL on and Tr...
11

memenorio
Nov 11 @ 5:44pm
General Discussions
SOMEONE ANSWER THIS
i have played for 4 days with little breaks and when someone has an invalid name i do the fingerprints (i even highlight them and it says matching data) but when i allow them in with no other mistakes it just gives me a penalty for invalid name WHEN THE FINGERPRINTS EVEN MATCH...
15