Chess, but you replace your entire army with a royal shotgun. A unique strategy roguelike based on the timeless checkboard classic.
-10%
$5.99
$5.39
Visit the Store Page
Most popular community and official content for the past week.  (?)
Shotgun King now available in Korean, Russian and Ukrainian!
Jun 20 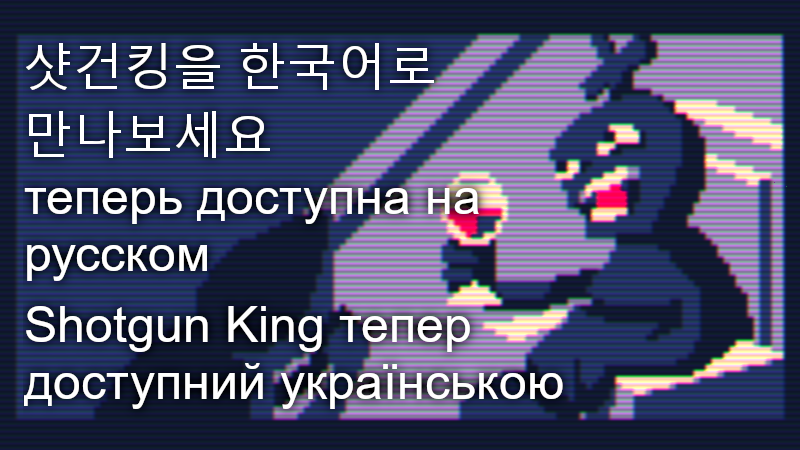 We're very happy to bring you more languages for Shotgun King!! Korean, Russian and Ukrainian have just been added to the game!

The translations were made by Otiel, Trek, Drugon, and NamorSom who we thank very much for their help!

We have 3 more translations which are awaiting approval. They are complete but need to be tested before we can add them to the game. If you can read Romanian, Polish or Brazilian Portuguese and you would like to help out, please come to our Discord server[discord.gg] to download them and test them!

Since the last News Post we also did two very small quickpatches, so here are the changelogs:

Once more, thank you all for your support! We are working on a bigger update, so stay tuned for that! :)

Have a nice week!
-PUNKCAKE Délicieux 🥞

Shotgun King: The Final Checkmate
100
10
That one F-word seems really unnecessary
This may be nitpicky, but one detail that bugs me is the fact that during the narration before floor 12, the game just randomly drops an f-bomb for no good reason. The game is otherwise completely devoid of swearing and is relatively family-friendly (all the shotgun tomfoolery notwithstanding), so it seems really out of place to me for it to just randomly drop an uncensored f-word like this. May I suggest replacing it with "@#$%" or something along these lines? That would seem a lot more fitting with the ...
43

Sirevanac
Jun 21 @ 6:53am
General Discussions
What is the difference between the demo and the full game? Thinking of purchasing this game.
Title. Only played the demo so far and really enjoyed it. What other content would I be getting in the full game that isn't currently in the demo?
2 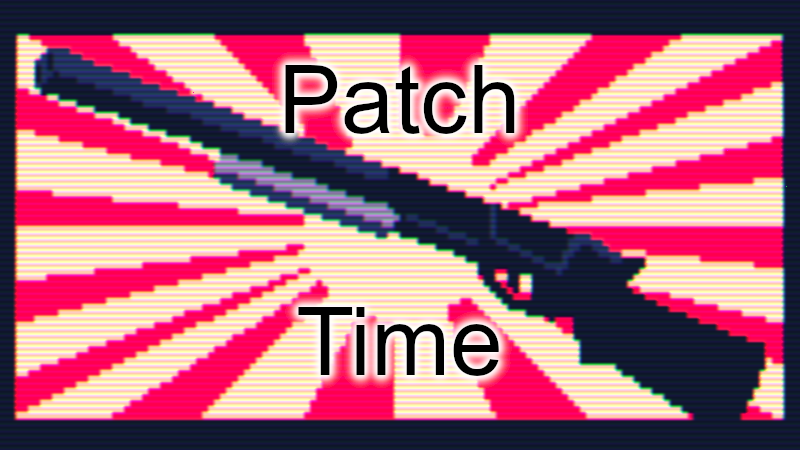 Very quick message to let you know we've patched some bugs and issues that appeared after yesterday's update.

Here's the changelog:
Thanks to people who reported problems!

And as always thank you all for your support!
Take care!
-PUNKCAKE Délicieux 🥞

Shotgun King: The Final Checkmate
89
13
Game doesn't launch after the update 06.06
Just as the title says, I was able to play the game yesterday but today I can't even launch it, i tried to pick the CRT compatibility mode or something but nothing happened.
16 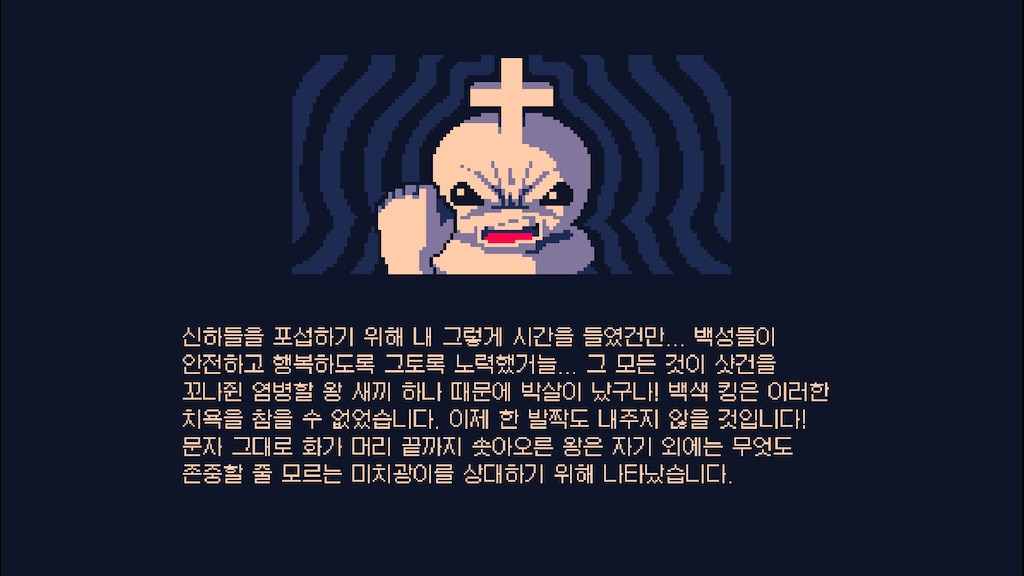 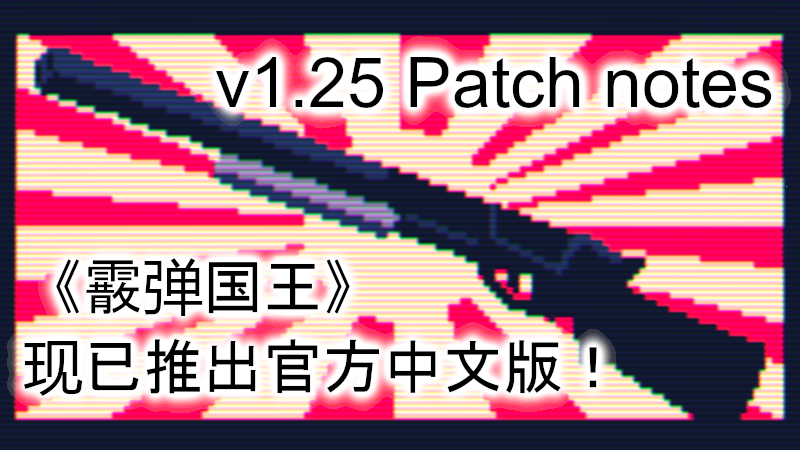 It contains a lot of bugfixes and some minor improvements and balance changes. And it adds simplified Chinese to the game's available languages!

We've spent a lot of time working on our game engine so that it would support unicode characters, and then so that it could display them at a different resolution without utterly butchering the game's looks. And now that it's done, it means we can support many more languages. Chinese is the first to come to the game but we have plans for more, more info further below!

We also took the time to add back accents and special characters to the existing French and Spanish translations, as well as rework the French translation a little bit.

Here's the complete changelog:
Thanks to everyone who reported bugs and issues with the game! We hope you'll appreciate all the fixes and changes!

As usual, all these changes also apply to the demo which we just updated as well.

And now that the game supports non-latin characters, we're looking to add more translations. We already have a few community-made translations that we'd like to officialize, including Japanese, Korean, Ukrainian, Polish, Russian, Italian, Dutch, Portuguese, and Romanian! Those all need to be updated for the new version, and more importantly they need to be tested by other players who understand the language before we can add it in.

If you'd like to help test out new translations, or that you'd like to propose a new one, please come to our Discord![discord.gg] That's where we're storing all the translations right now and where we coordinate everything. Your help would be more than welcome!

We're excited to make the game accessible to more players all around the world with your help!

Once again thank you all so much for your support and for making Shotgun King the success it is! It's been barely four weeks since the release and we're still overwhelmed with how well it's been doing! Thank you!! ❤

Have a great week!
-PUNKCAKE Délicieux 🥞 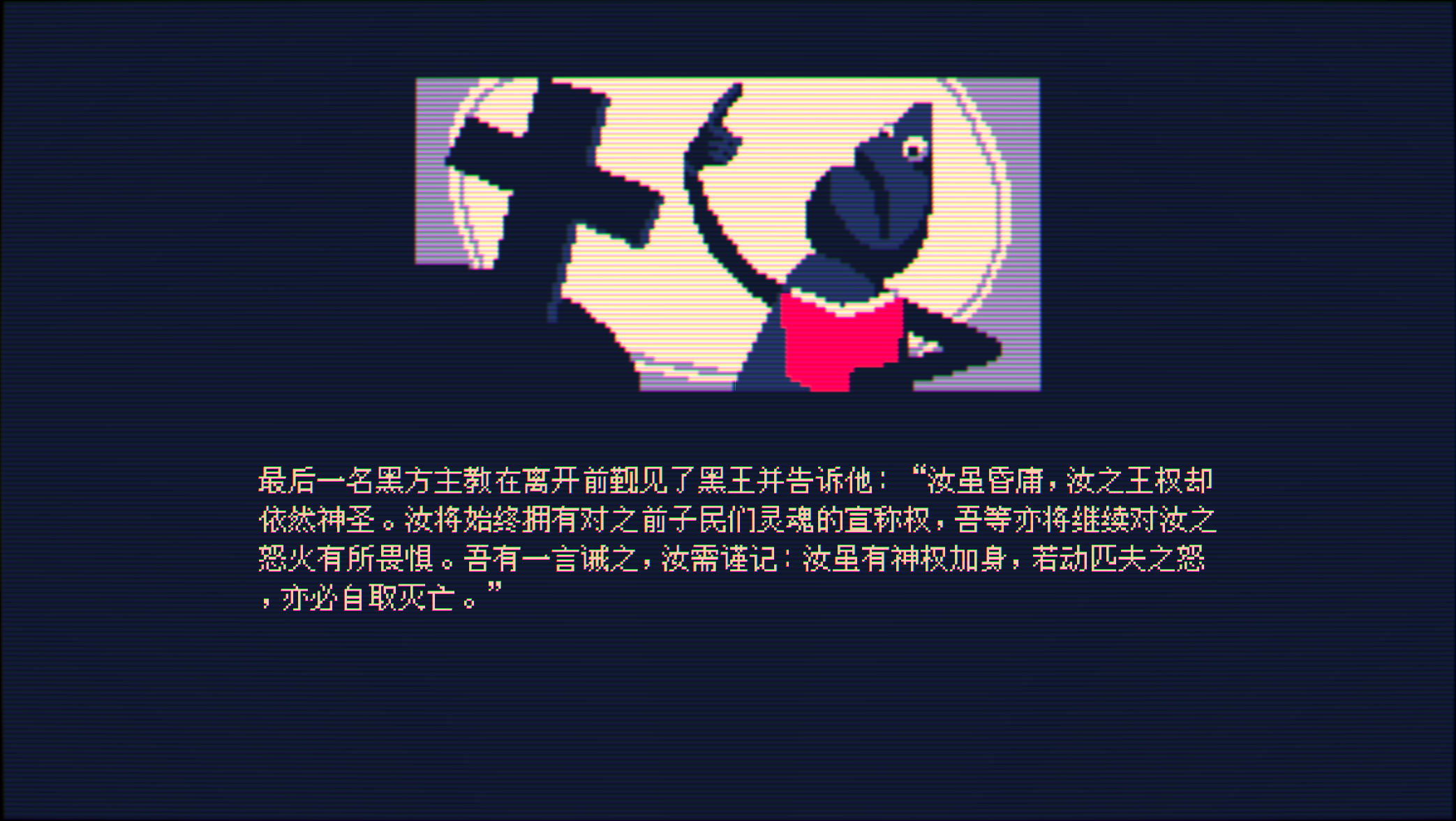 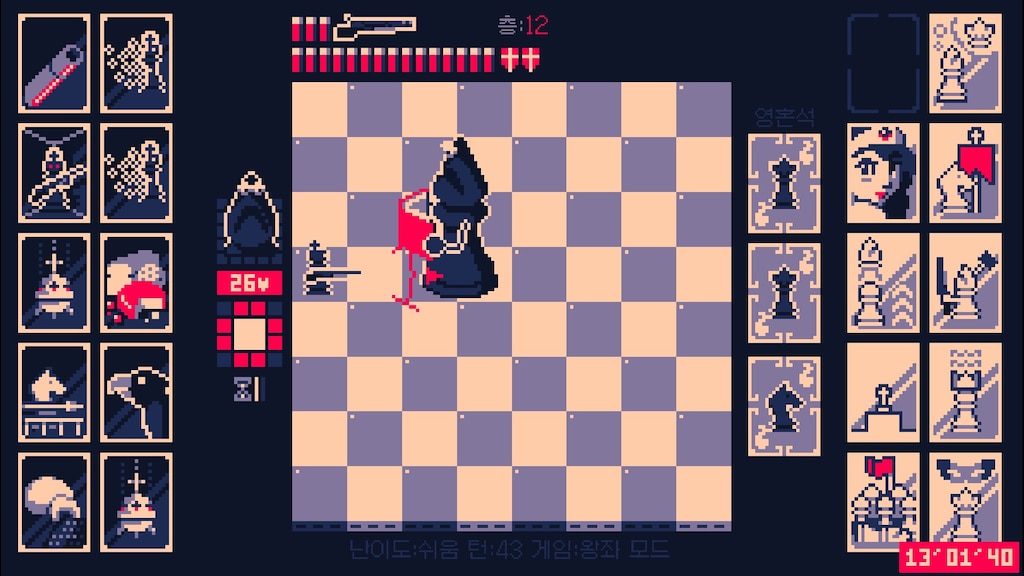 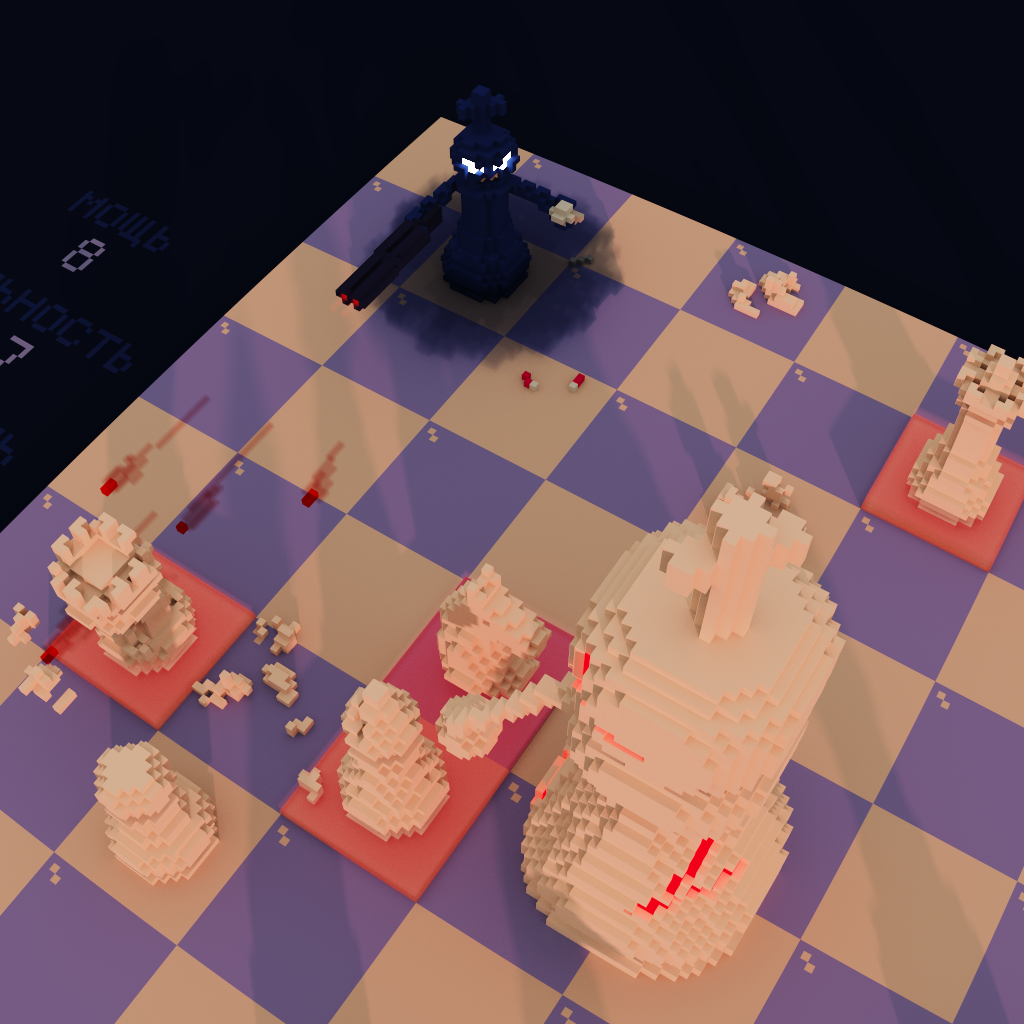 Not Recommended
11.3 hrs on record
The fun of this game lasts as long as you're charmed by the surface of the game; it looks promising with a funny combination of a long-known strategy game and a shotgun. However, everything crumbles quickly for many reasons.

- Opaque Mechanics: One of the hugest problems of the game. You don't even get a tutorial or guidelines on how to play the game. Thus, it's up to your intuition to figure out how things work. The discovery process is enraging instead of exciting with how you feel scammed about not knowing about a certain interaction. For example, who would have known the holy hand grenade bounces around and could kill you? I didn't even know you could stand still and reload your gun until I read something about it. These were not fun lessons to learn the hard way considering there was nothing warning me about this.
- Balance Issues: Yes, almost every game has this, but in this game, they're excruciatingly terrible. Some of these can't even be fixed with number changes; the core mechanic of some of these are unbalanced. There are plenty of cards that you almost always take or almost never take because of how they are too consistently good or terrible, which ruins the decision-making process.
- RNG: Somewhat ties with balance issues, but how RNG plays into the game feels more like dice-rolling instead of playing with what you're offered. The cards are one example, but the tempo of the enemy pieces is another source of RNG poorly implemented. An unlucky setup involves threatening pieces moving one-by-one so you eventually get cornered to death. Sometimes the AI is too dumb to use that to its advantage, but that should not justify this issue. This somewhat stems from the mechanic of enemy pieces allowing to land lethal even when it's not their turn, which I feel is unbalanced.
- Difficulty Modifiers: Short story, they make you rely on RNG more than demanding more skill. The Hard modifier is already iffy when you think about it, but starting from Very Hard, it becomes blatantly obvious that the modifiers remove player agency, which is core to any game.
- Inconsistent and Unclear Intents: When a piece starts shaking, you know it's coming. The AI is fairly predictable on what it will do, but it becomes a mess when other pieces are mixed in and moving simultaneously. For example, a bishop moving in to place you in check gets blocked by a knight simultaneously moving into its path. You can't read that. Even if you knew every little detail on the movement patterns and interactions, they are not clear at all. Maybe I'm spoiled by games like Slay the Spire. Or maybe there's the realization that information should be as transparent as possible so the player can respond to it.

I honestly don't know how I lasted 11 hours on this game. Only the first hour or two was genuinely fun as I was in the trance of enjoying the retro theme and funny crossover of themes. The enjoyment faded away as I grew frustrated with mechanics that felt like they scammed me instead of pushing me to learn from my mistakes.

Card Review and Enemy Guide 1.03
A comprehensive review of black and white cards, as well as some general tips on each enemy type. 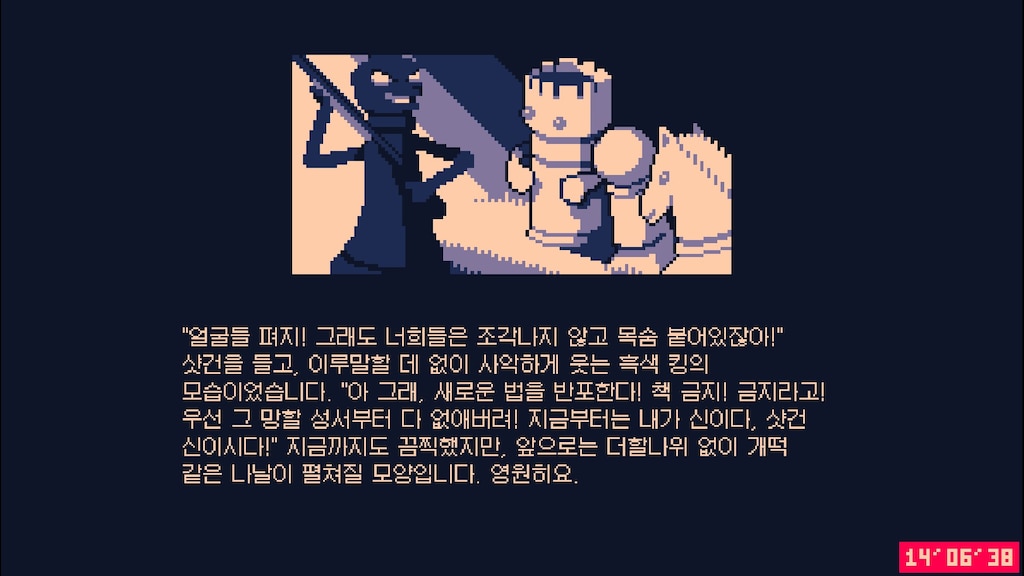 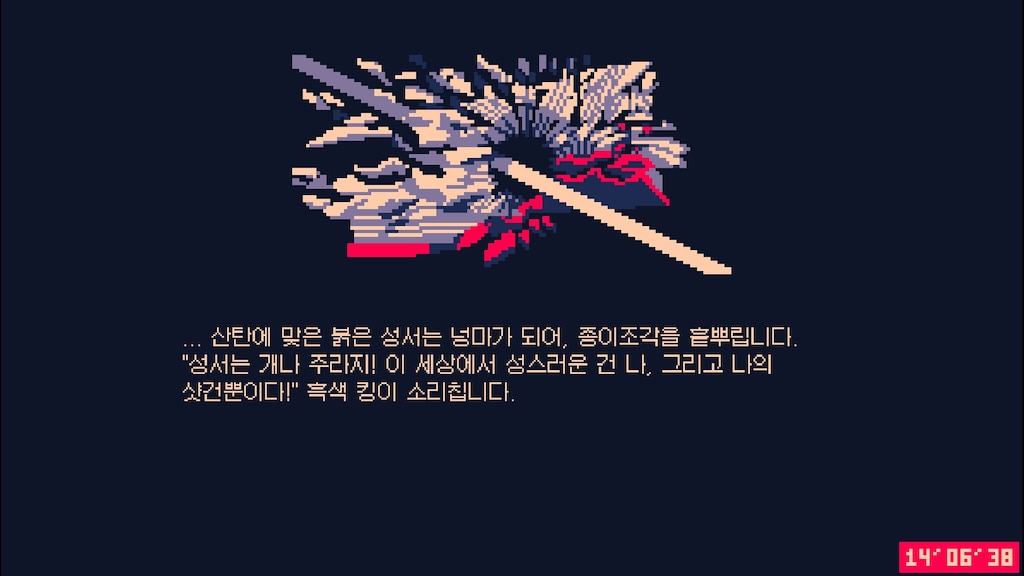 How to Kill The Black Bishop
A step by step guide getting the Avenged and Exorcised achievements.

The Road to Grandmaster: An In-Depth Guide to Shotgun King
Struggling to succeed in Shotgun King? Feeling overwhelmed by your options and overran by hordes of cascading white pieces? Look no further! This guide will give you the keys to the black kingdom and explore the ins and outs of the chess board. With these ... 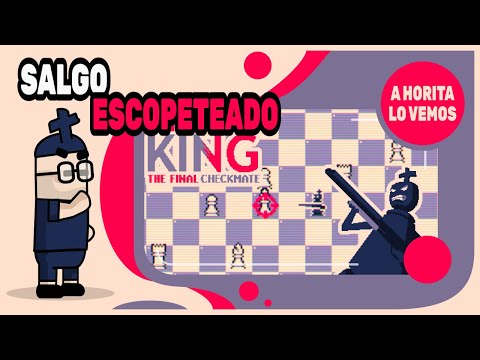 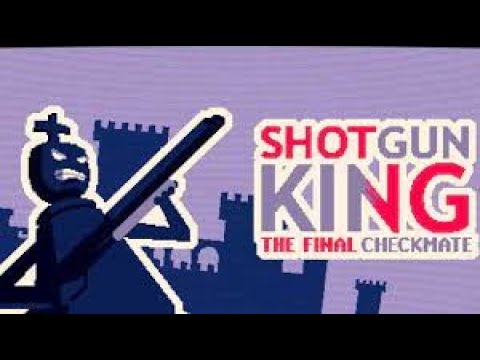 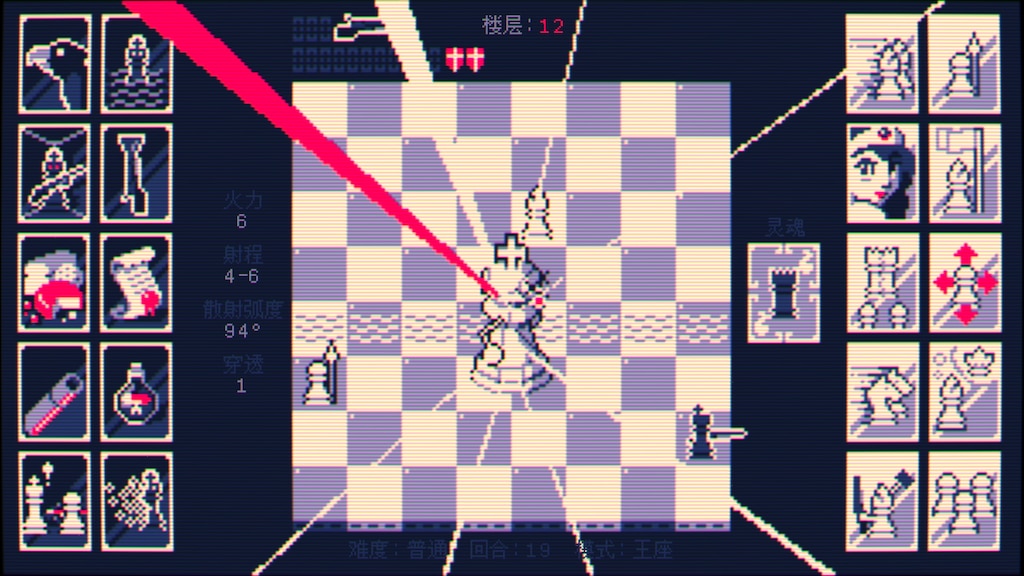 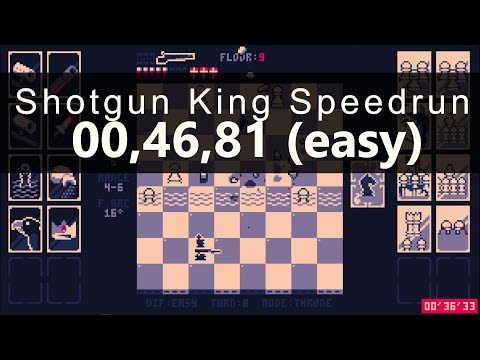 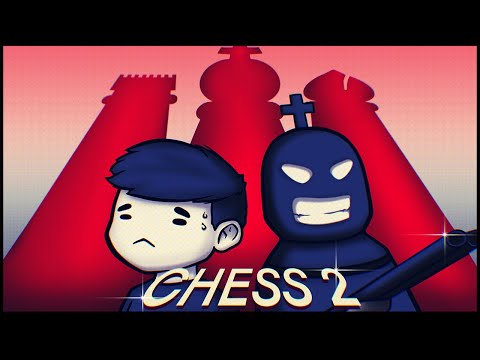 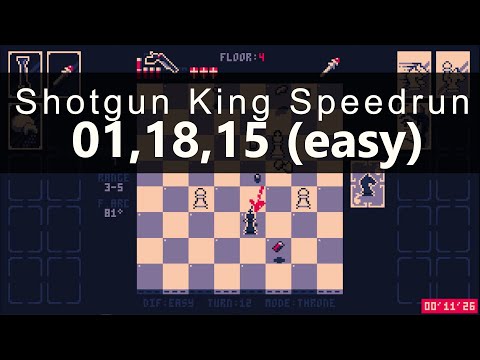 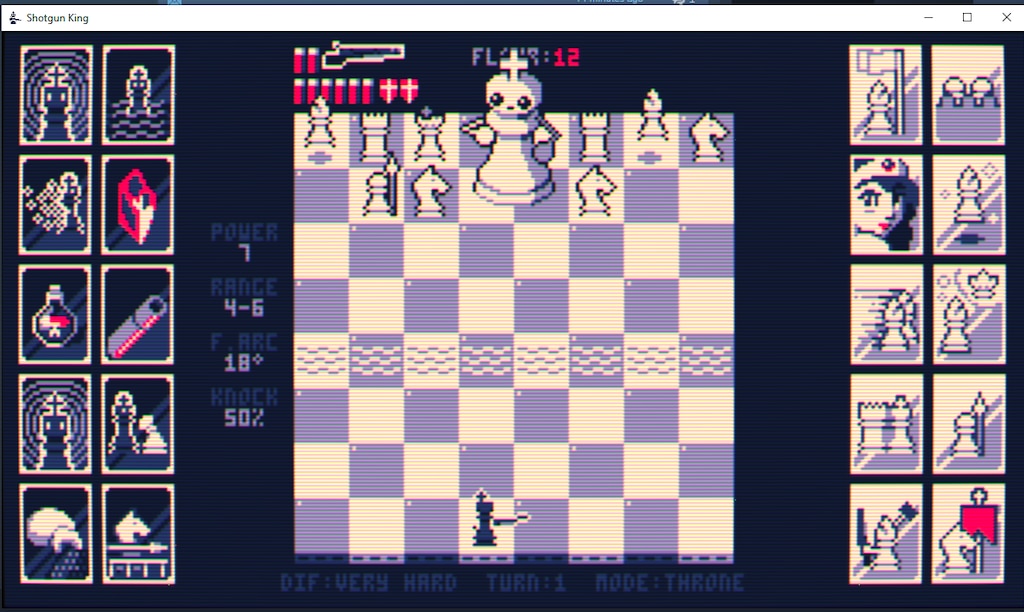 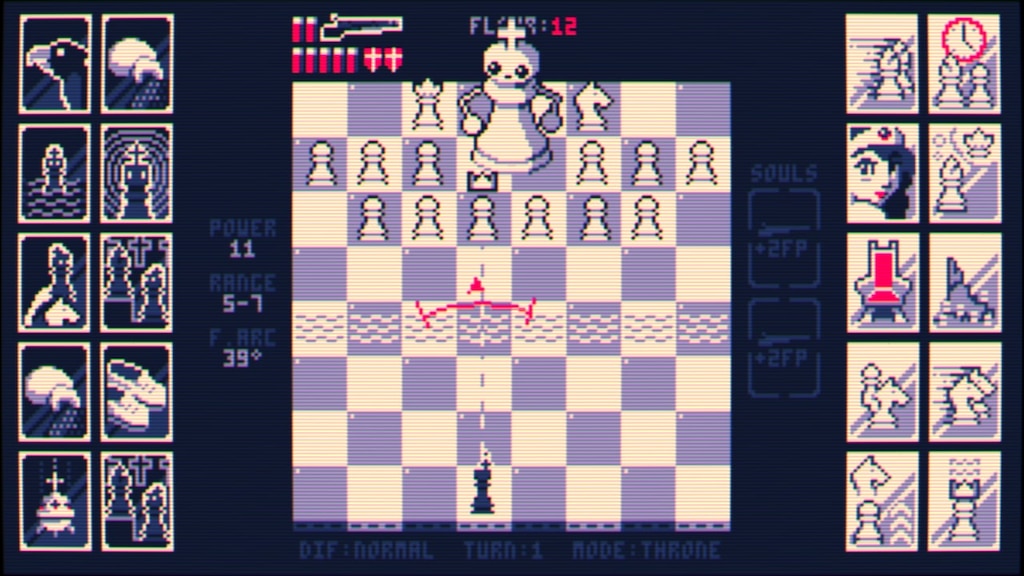 Logic
View artwork
New Card Ideas
Post some new card ideas. Just for fun, at least. Black Cards Target Practice = Firing arc -3 degrees for each pawn killed this floor. Resets after each floor. Trap Door = At beginning of floor, removes a random non-king piece. Homing Shots = When shooting, all pellets are guaranteed to hit a piece within the firing arc (there may still be some random distribution between pieces if more than one are in the firing arc). - 1 firepower. Pray and Spray = If you miss a shot (none of the pellets hit any pie...
23 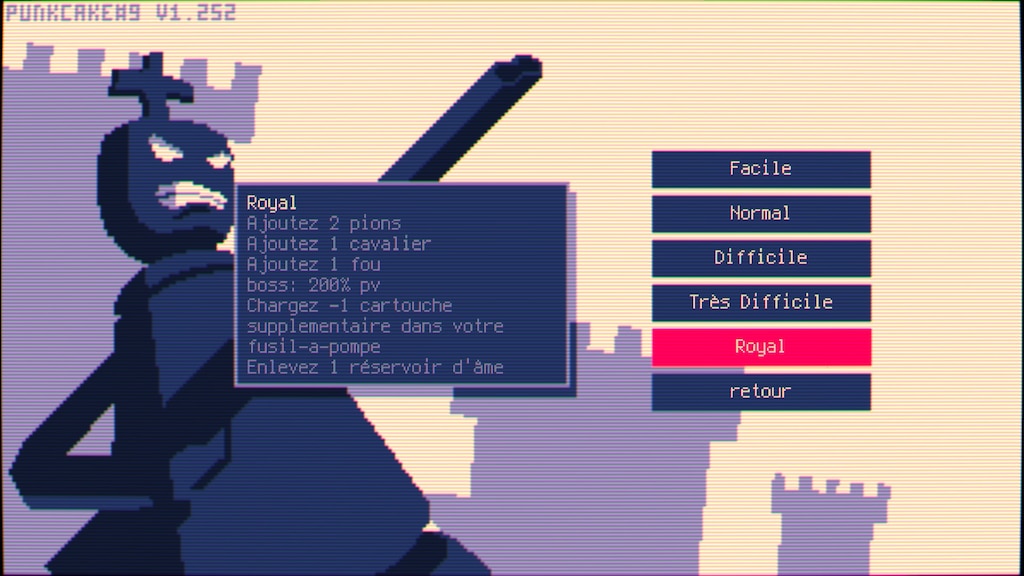 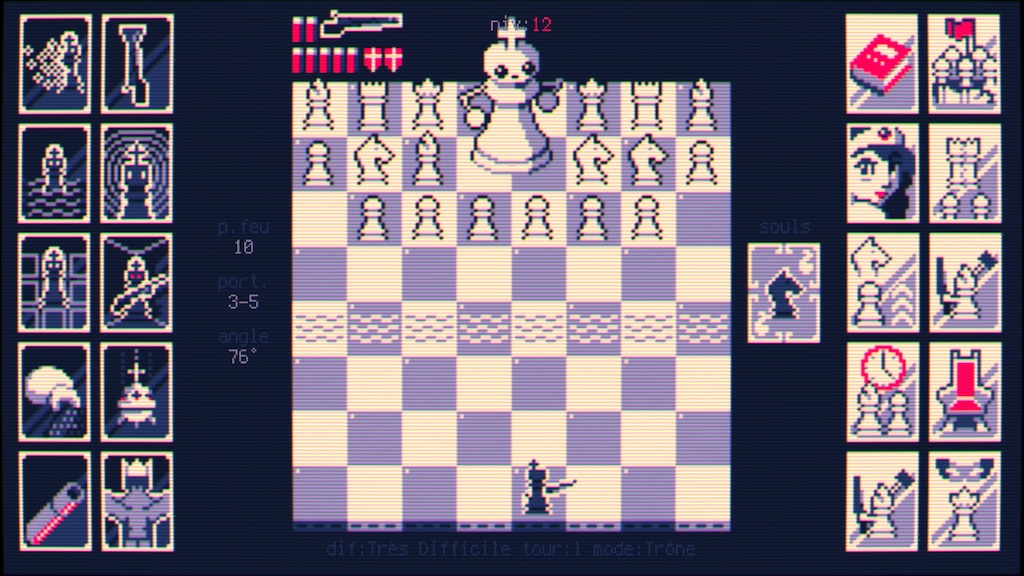