Turn-based horror, MULTIPLAYER experience based on one of the most successful board games. Survive, co-operate and possibly BETRAY your team in multiplayer or enjoy the game in solo!
$19.99
Visit the Store Page
Early Access Game
Get instant access and start playing; get involved with this game as it develops. Learn more.
Most popular community and official content for the past week.  (?)
Patch 0.91 is here!
Jul 11 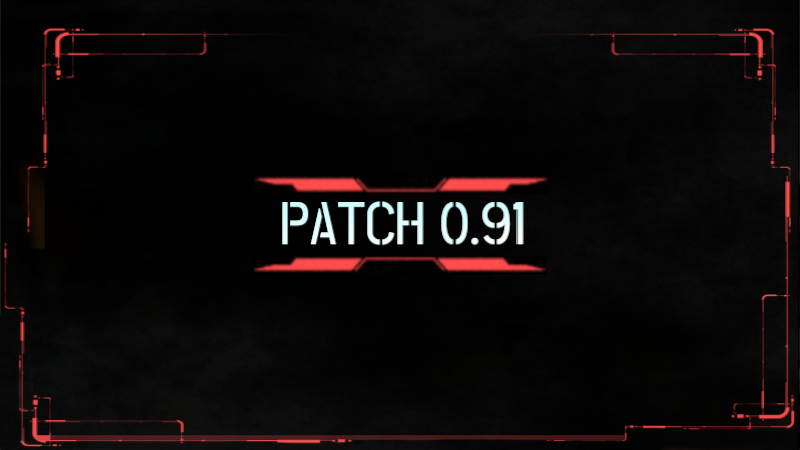 This patch has been targeted to improve quality aspects and fix many bugs, especially those, that caused freezes/crashes. We’ve also made some changes regarding action costs and improved scoreboard with detailed information about what exactly happened.

Besides that, we’ve improved the descriptions of some actions from cards and items to be more detailed, made some linguistic corrections, and ameliorated the display of player bodies after death on the tactical map. Check the detailed list below:

Photos showing some of the changes:
1. Chat on top 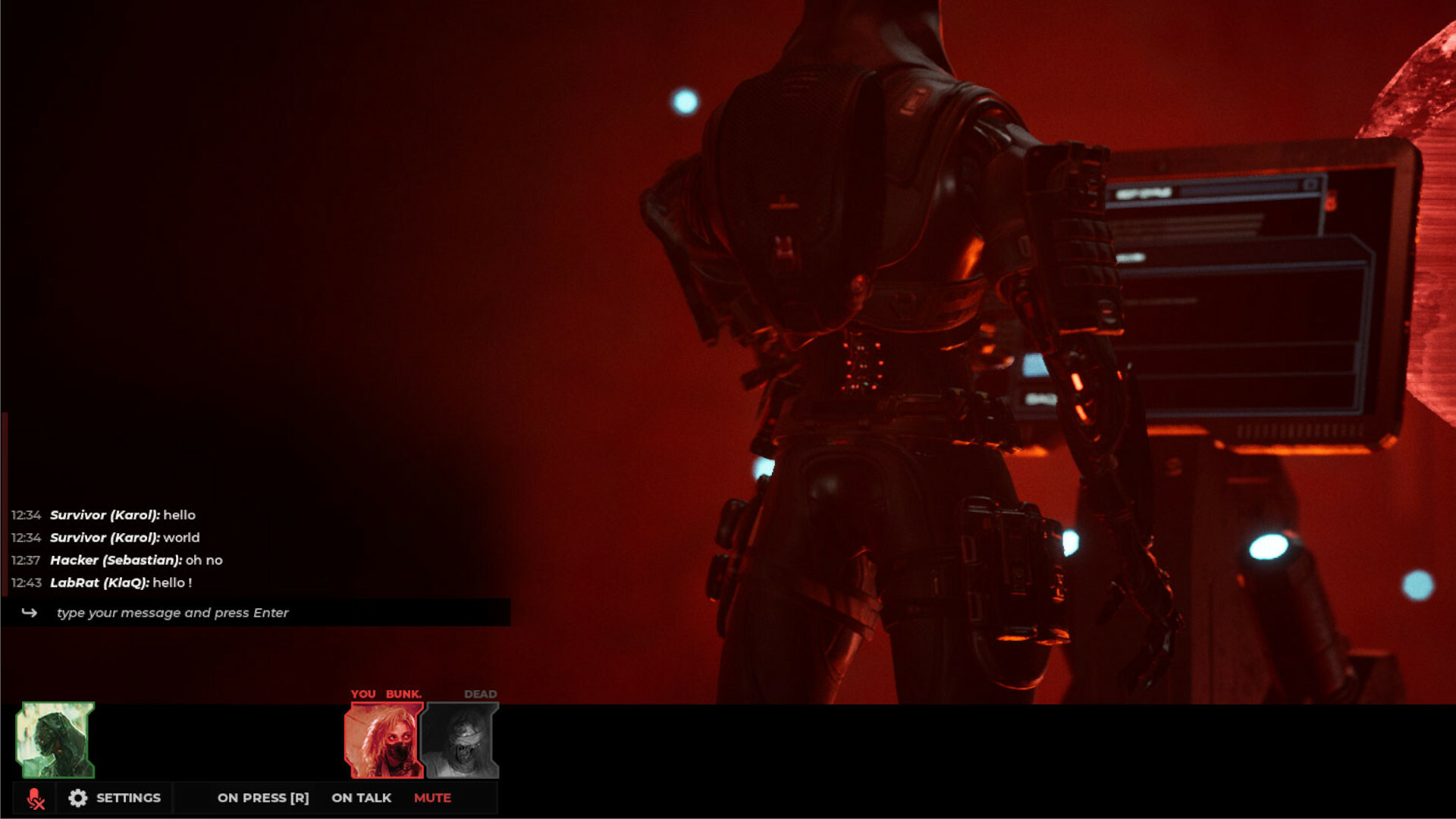 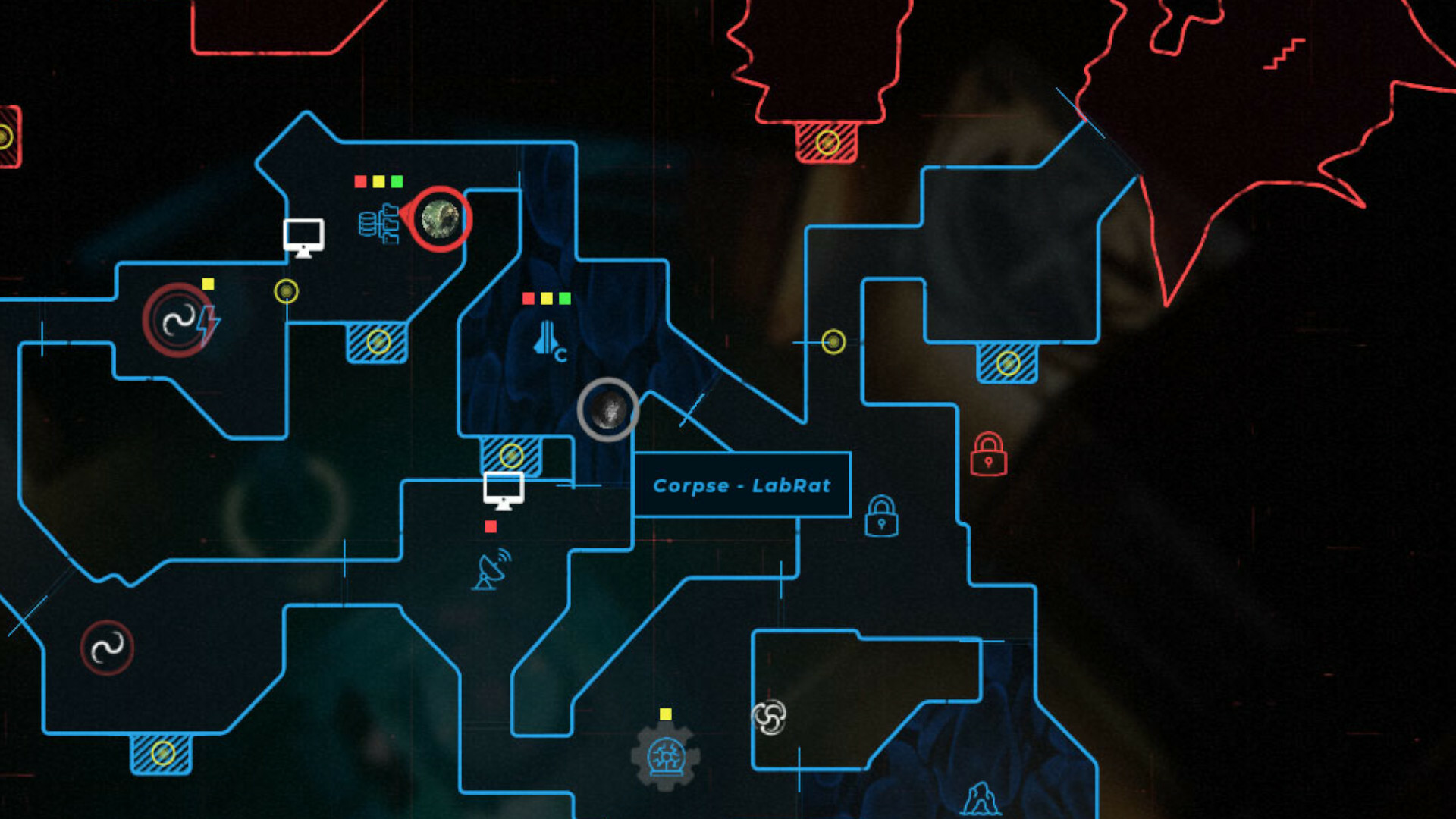 3. Voice and text chat available on the scoreboard 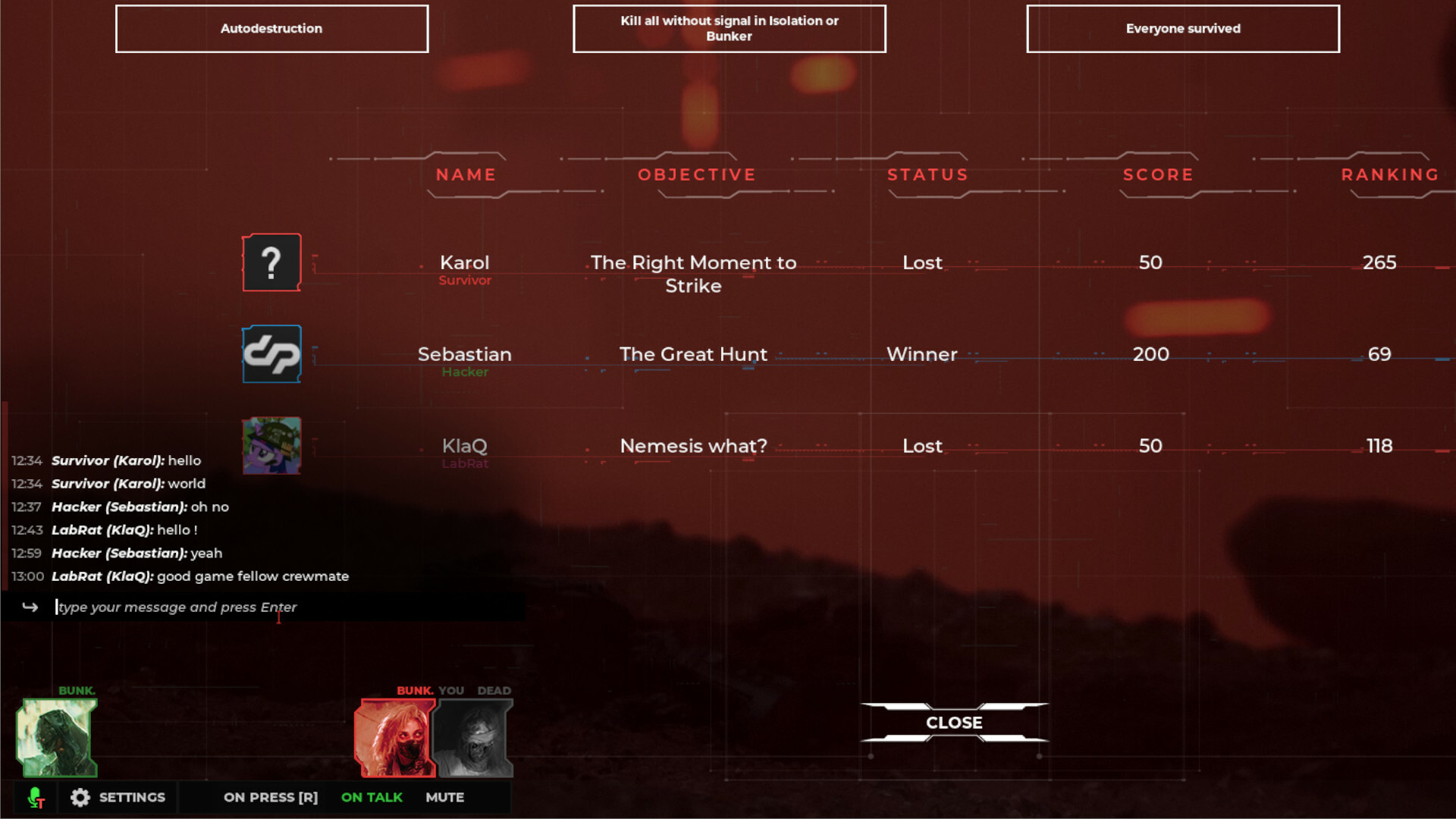 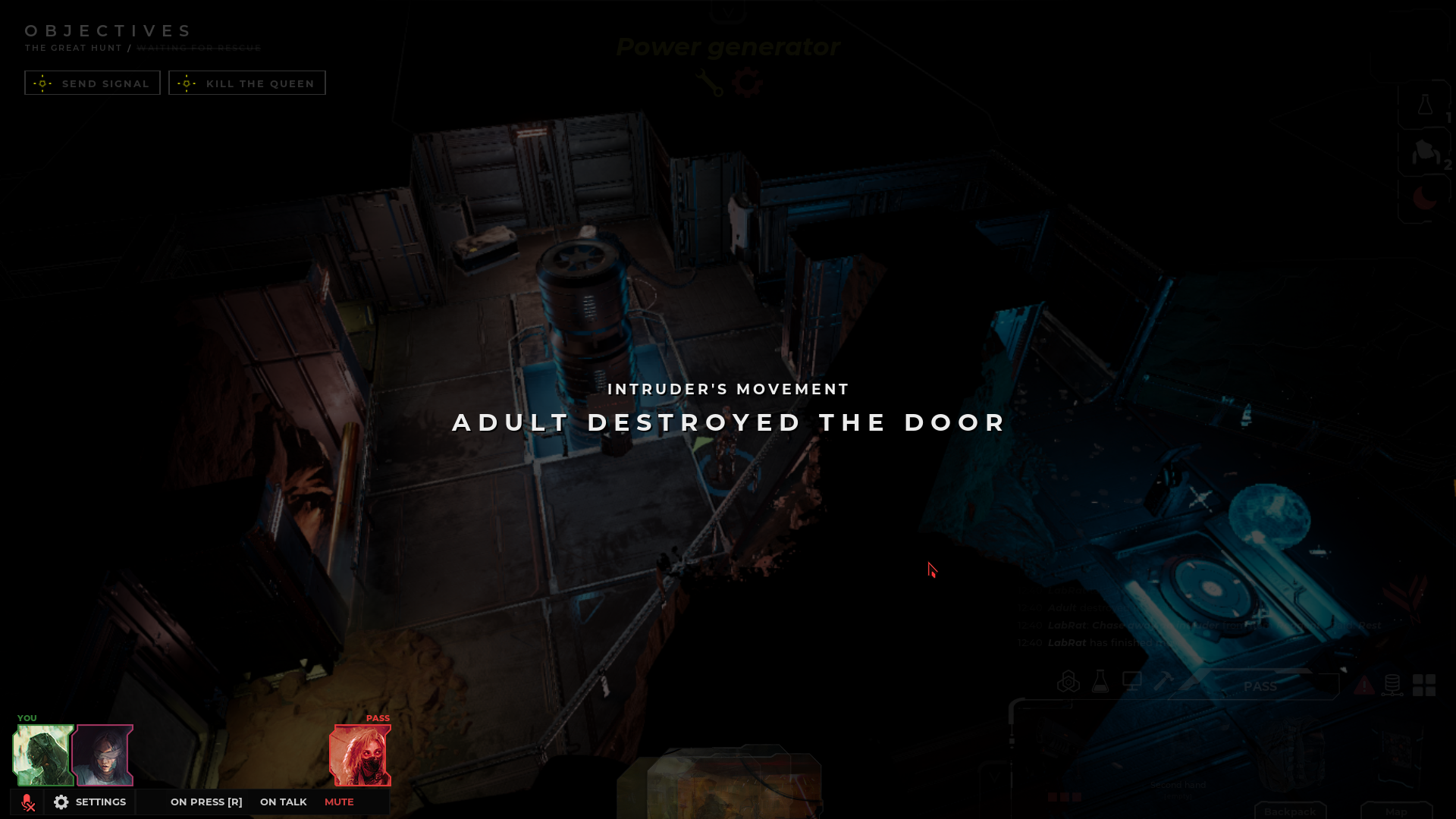 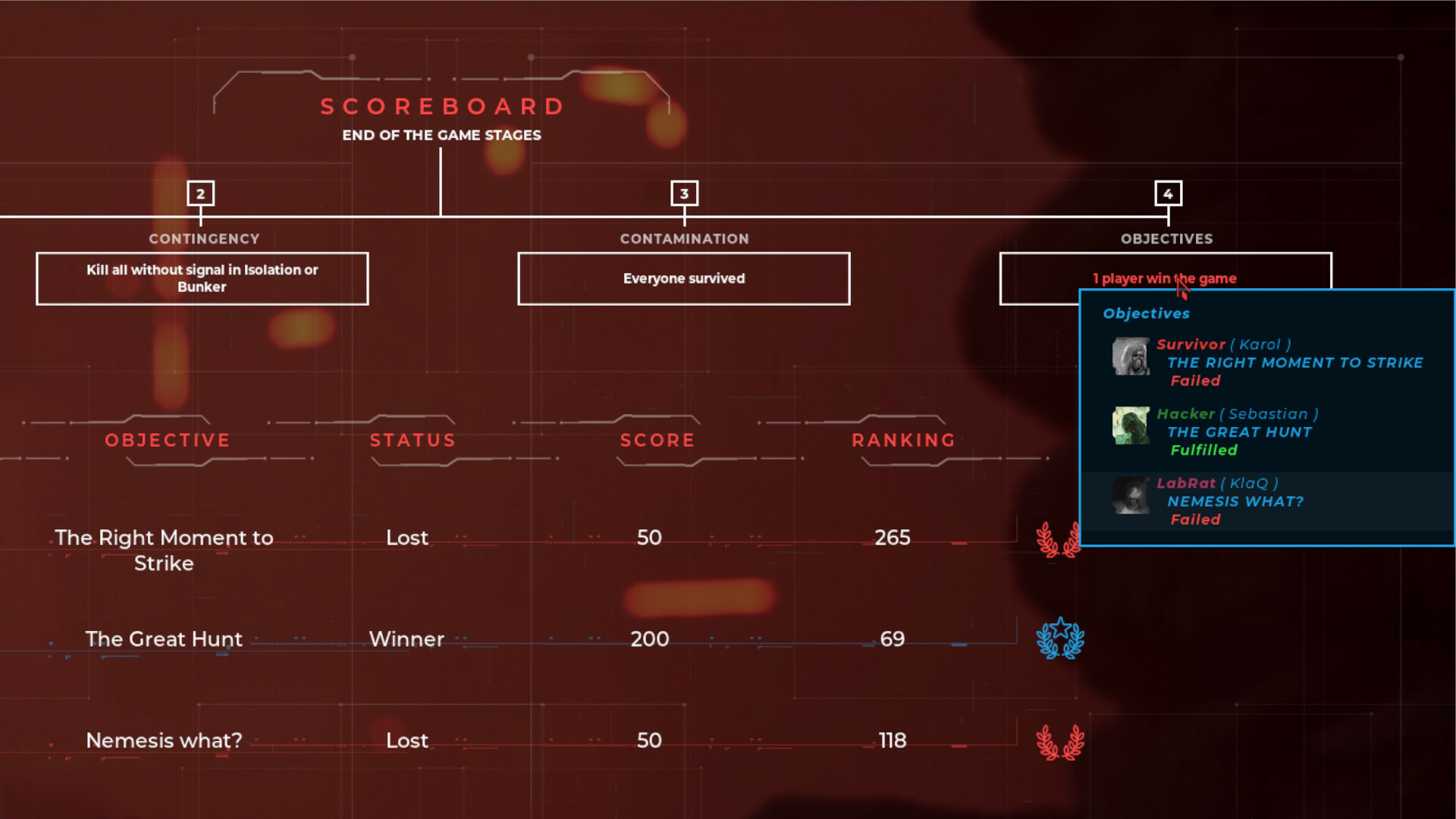 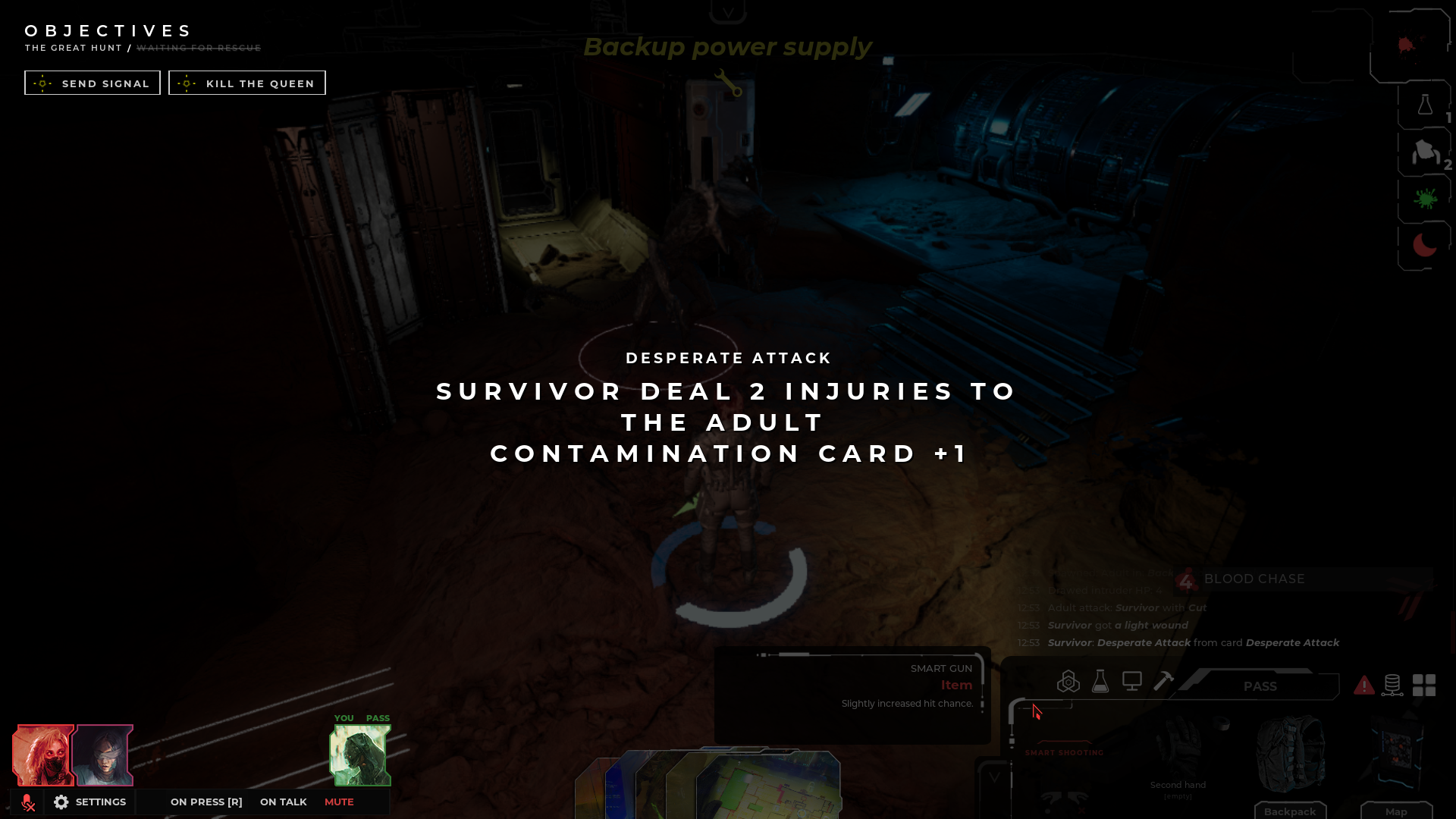 There are still more updates ahead and we'll gradually share with you new features, upgrades, and game fixes. Stay tuned for the Road Map, which will be announced pretty soon.

Your feedback is truly important to us! Thank you for all of your reports about bugs and suggestions - it helped a lot already! It's great to have all your engagement and support!

If you haven't joined our discord community yet, you can do it right now! Chat with other survivors, ask our team or leave us feedback, which we will surely appreciate :)

Nemesis: Lockdown
64
12
Blazin_Caucasian calls other players Ni**ers.
I'm just here to play a fantastic game without seeing constant racial slurs in chat. Can we please get a report player option?
1

Mathis
10 hours ago
General Discussions
Worth it?
Good day gamers. I've watched the comments on this game in the reviews, and notice complaints from first time players about the lack of a tutorial. I want to purchase the game but I am concerned that I may not be able to play due to the fact that I have never played the board game before. So I have two questions. Should I wait for the tutorial before I buy? I do not play online, so is the game worth playing in single player mode? Thank you for your comments and happy gaming....
13 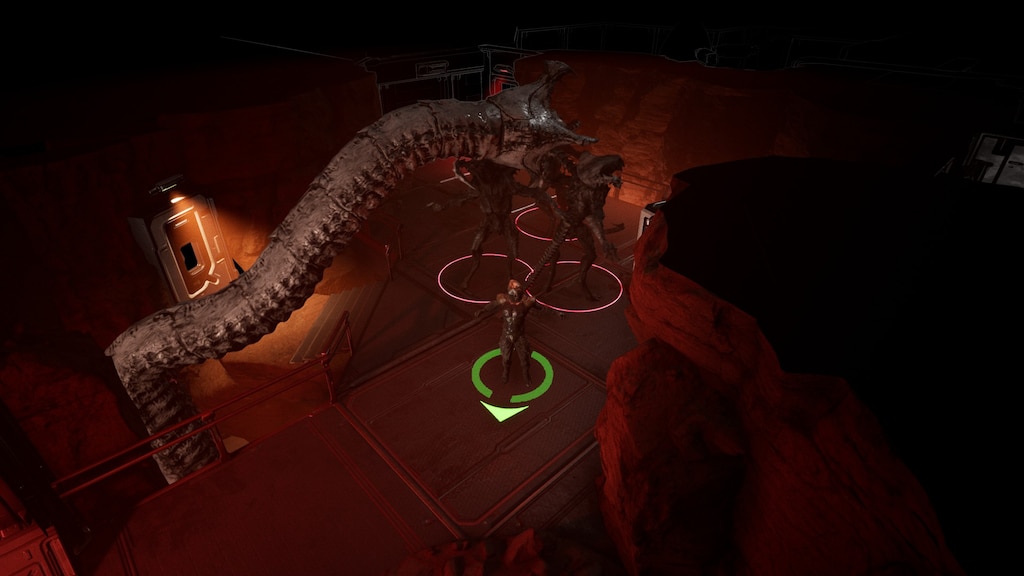 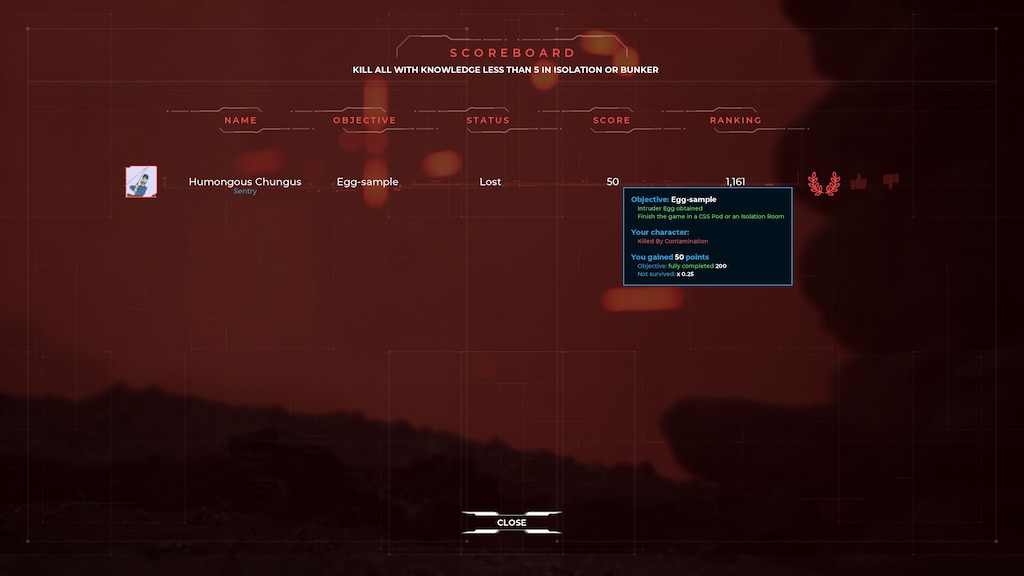 0
0
when you thought you survived and won, and still died... 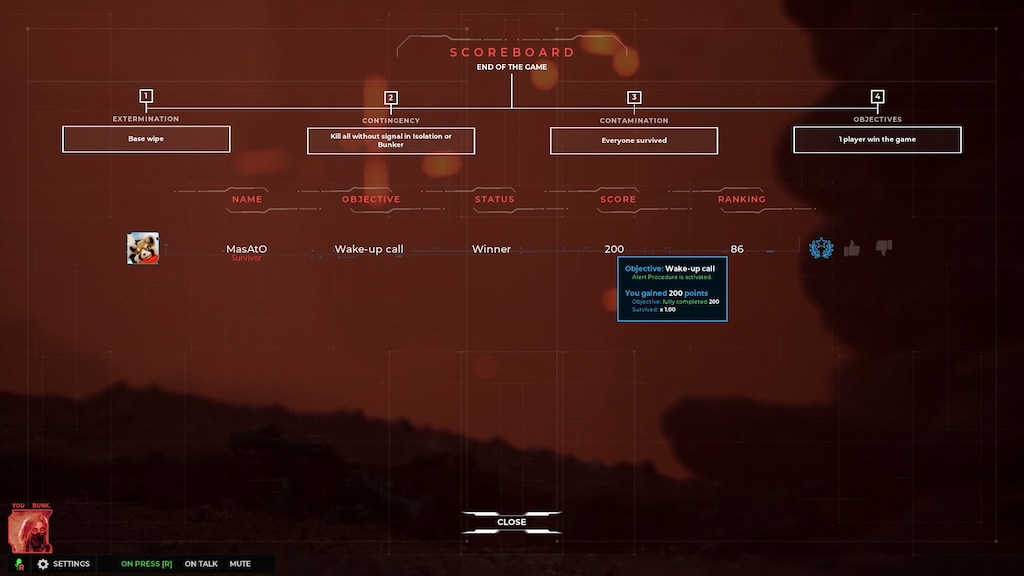 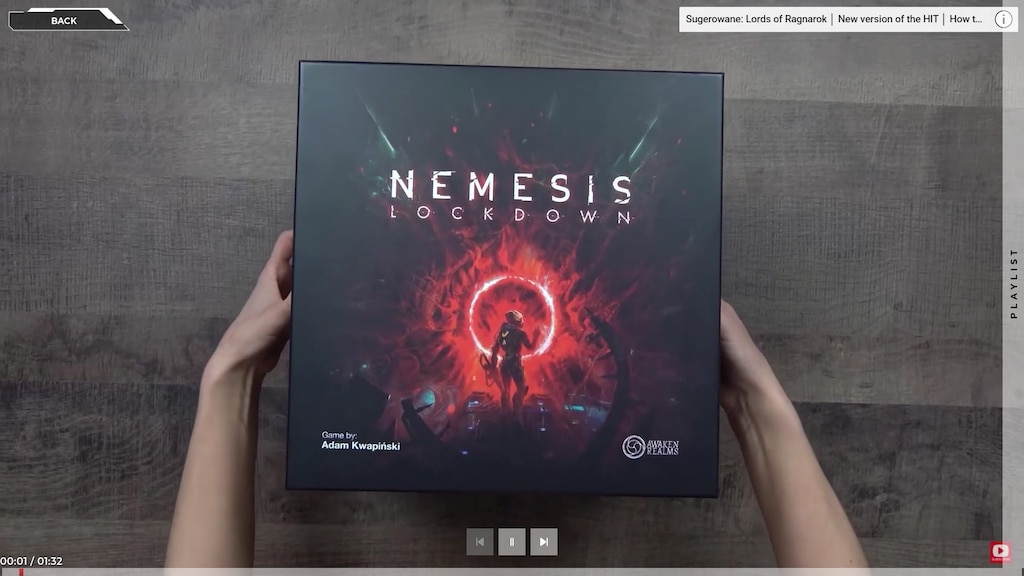 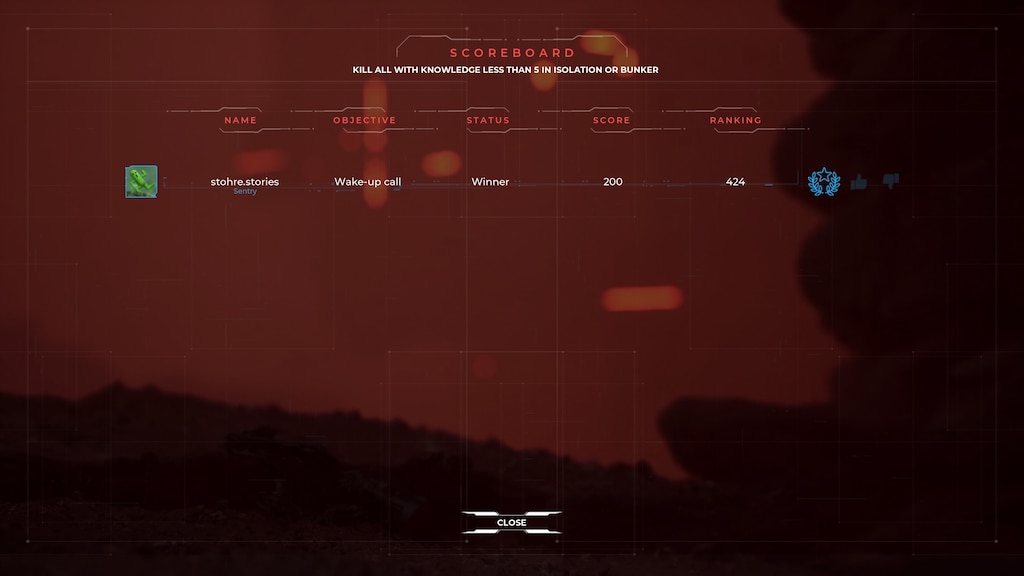 0
0
Freaking finally won a round. 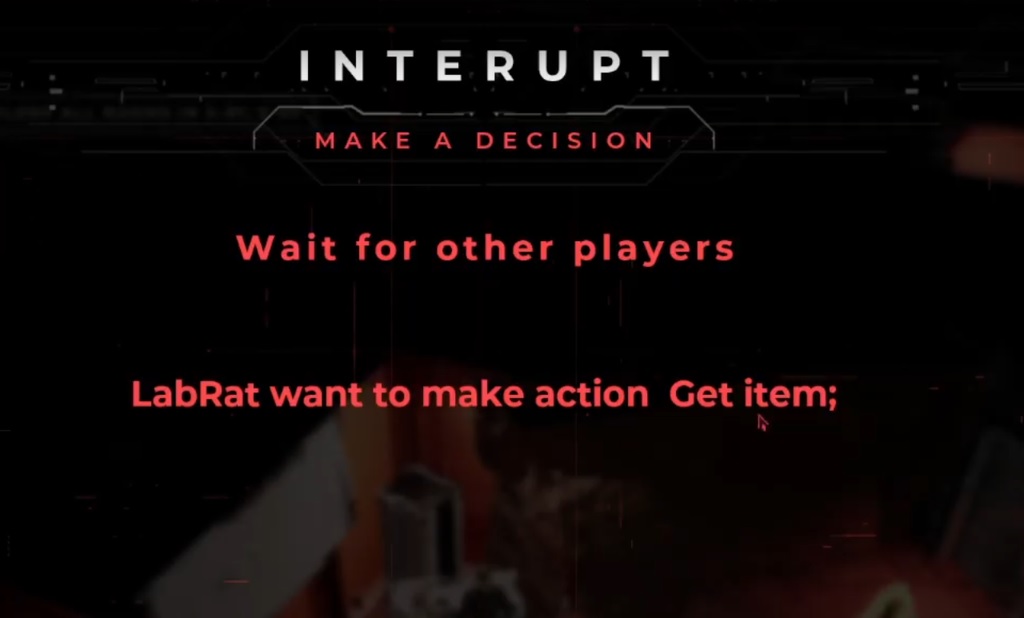 Not Recommended
12.0 hrs on record
Early Access Review
This is strictly an EA review, of course. I want to recommend this game to other players so bad, but I can't - nothing is abundantly clear when playing. If you've played Nemesis the board game, like I have, then you should be "ok". But that doesn't mean you'll enjoy playing this - you're better off busting out the tabletop and get after it. And if your new? Forget about it. It's interesting how the tabletop version is more immersive than this video game version, at the moment. I understand this is EA but I would hope that we can get more of what I see in front of me when playing the tabletop versus having everything inconveniently hidden away. Just some things off the top of my head that would help bring in new players and learn as they go:

1. All rolls should be displayed on the screen during all phases (that's what makes it exciting and intense when playing IRL)
2. The player board should be clear
3. There should be some sort of animation when cards are discarded/drawn
4. The turn that your on shouldn't be hidden away at the top - it should be visible at all times
5. Actions remaining should have a counter (I know it's just two but it should be clear)
6. The event phase is extremely important - it needs to explain or animate why things are happening a lot clearer rather than having to figure out exactly what happened in the hidden text box
6. You should be able to look at character cards and their quest items in the main menu - how else would a new player even begin to understand their advantages?

I will be here ready to play this game again after some much need QOL improvements for newer players. 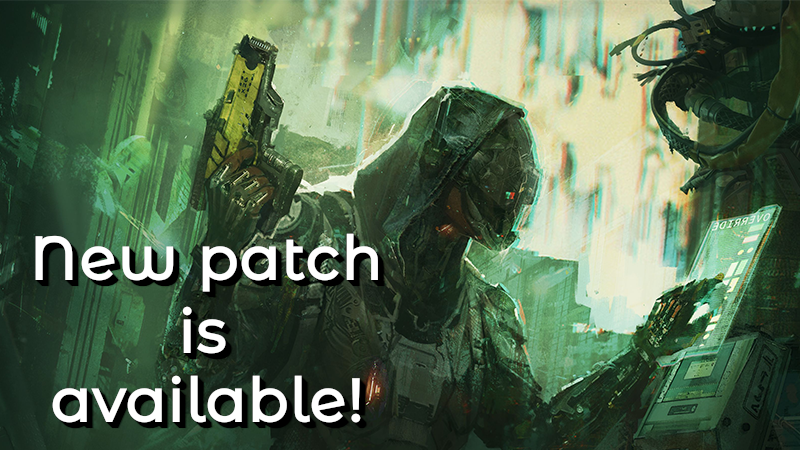 It's almost one month after we've launched Nemesis Lockdown and we want to thank you once again for all of your support and feedback that you gave to us in Steam discussions and on our Discord server. It is a pleasure to have a community like that!

Obviously, our team was working hard on improving the game and today we have just uploaded patch implementing all the improvements we were able to make! We hope that you will like all the changes - but we are obviously not done and much more is to come!

Tl;dr - we have fixed A LOOOOT of small bugs, improved representation of some elements of the game, improved multiplayer matchmaking experience and added TONS of quality of like improvements.

The full list of changes:
Here's a preview of some of the changes we have made:
New exploration tokens: 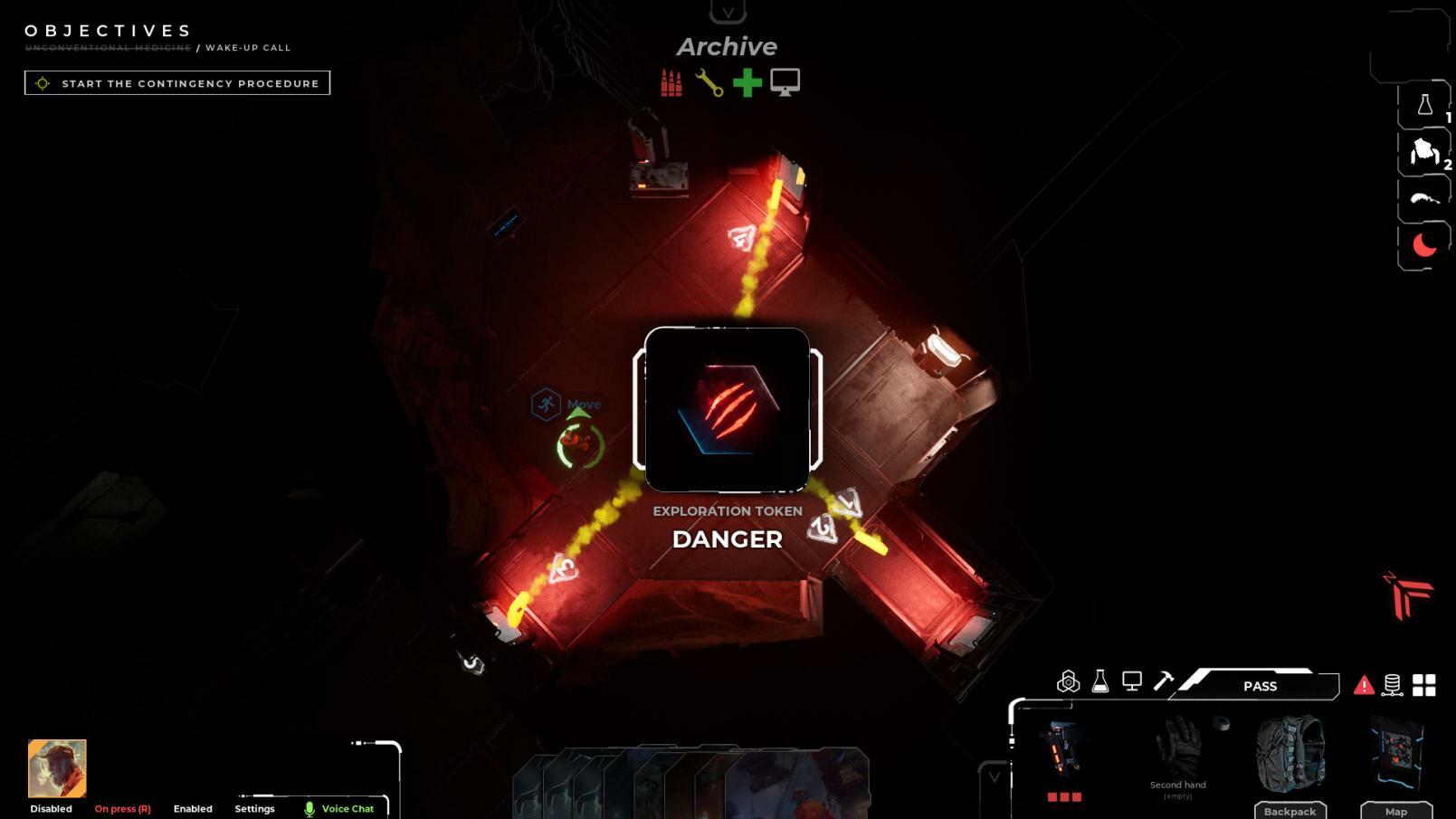 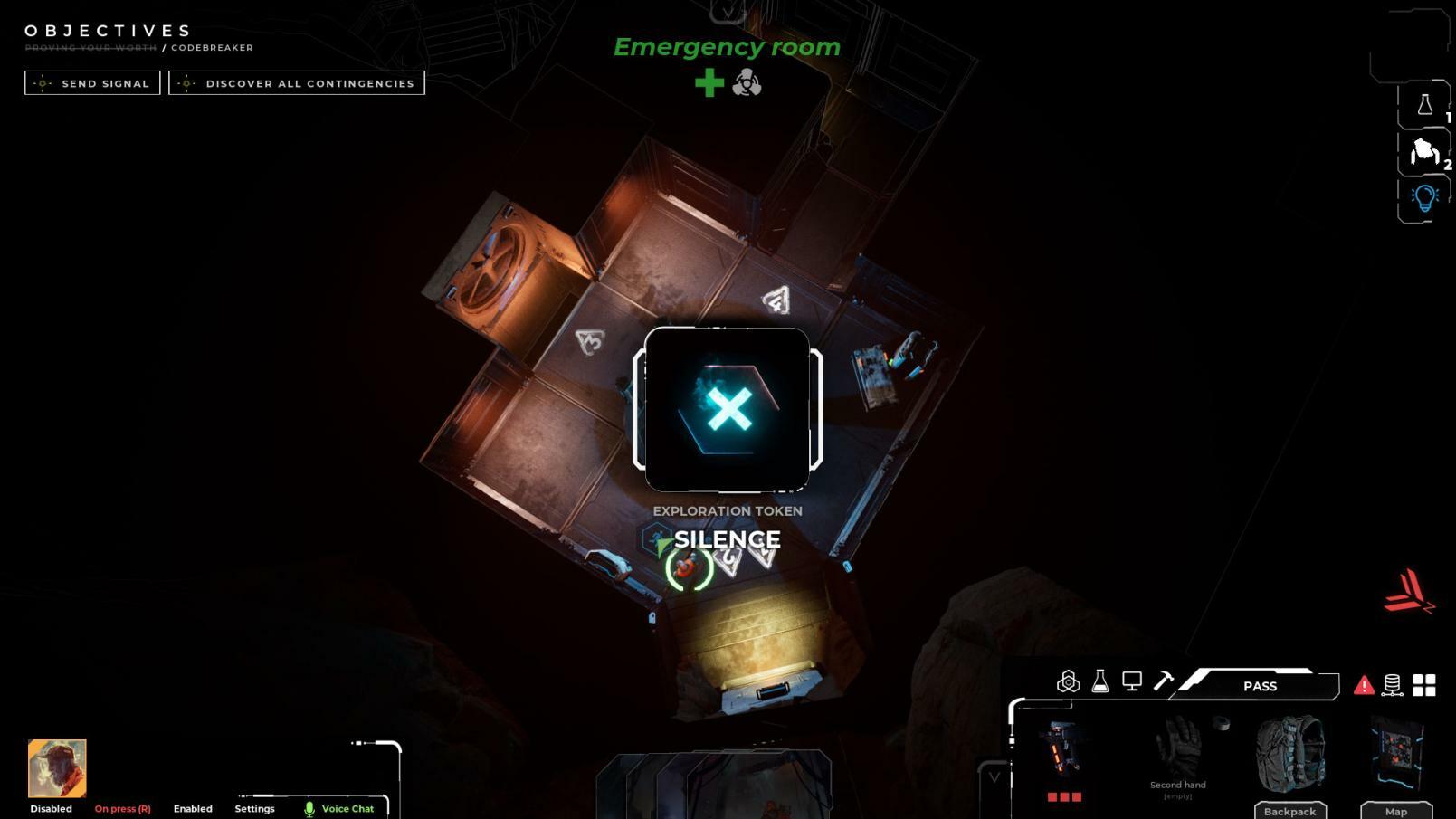 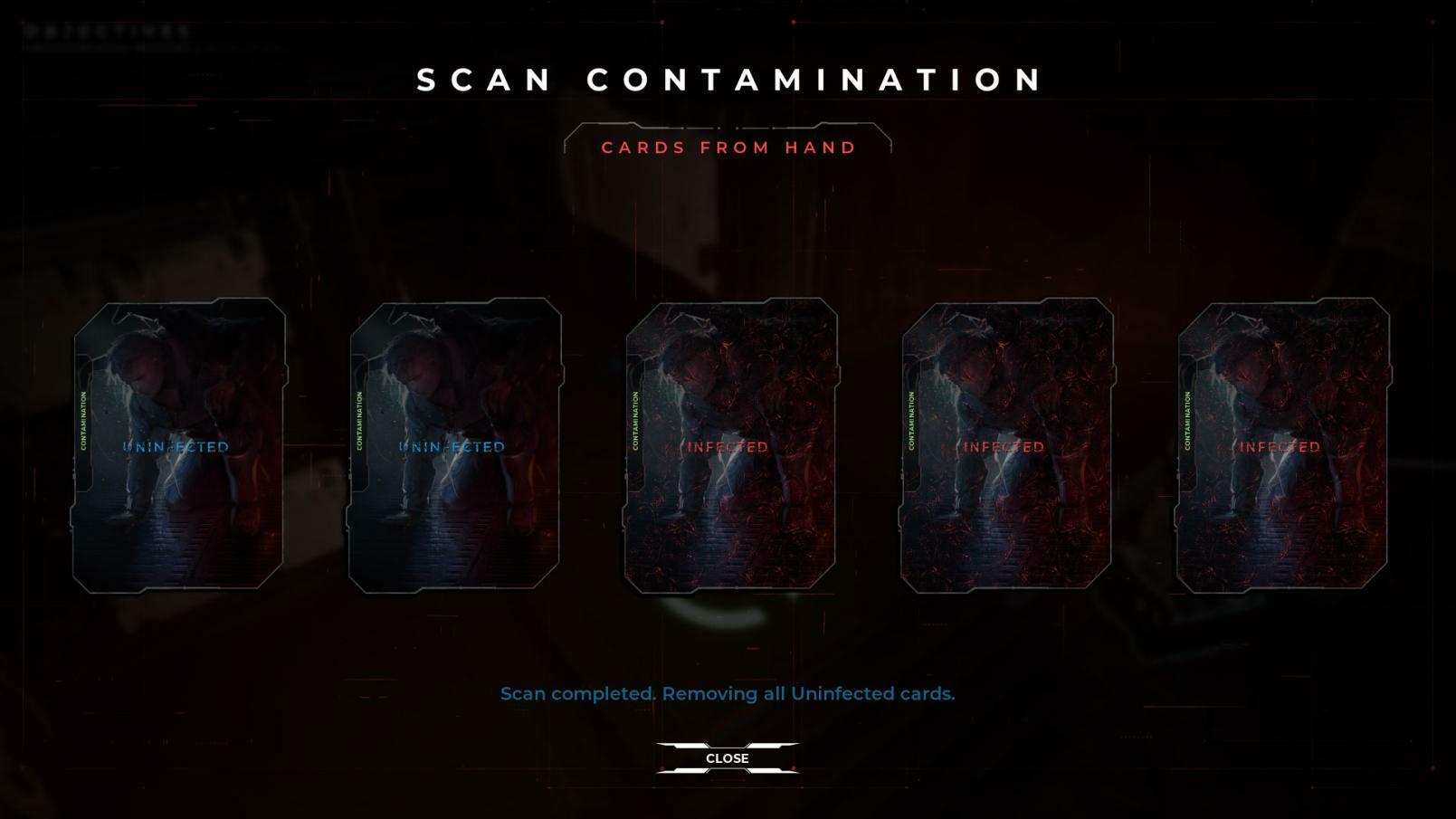 We know that there's still a lot to do and more updates will come soon. In the meantime you can join our Discord server [discord.gg] and talk with our Community or leave us a feedback, we would appreciate that :)

Nemesis: Lockdown
86
9
Dice system...
I´m only one who thinks dice systems should more visible like armello. Even more ability to throw their own dice would make it feel more fair. I mean there is something odd when game at times gets same number to many times in row because RNG gets stuck. At least it looks like that....
9

\Forever Alone/
Jul 24 @ 12:51pm
General Discussions
Features requests after patch 0.91
If you have some ideas, please share them here and we'll definitely look at them!
9

AR Ponto
Aug 4 @ 2:54pm
General Discussions
Performance? Can this game chill out a bit?
I have a very powerful PC and this game makes my rig run hotter than literally anything I have ever played. CPU *and* GPU both going crazy trying to run this thing at 100%. Y'all mining crypto with this thing or something? This is a board game. My computer should not be trying to destroy itself running this....
15 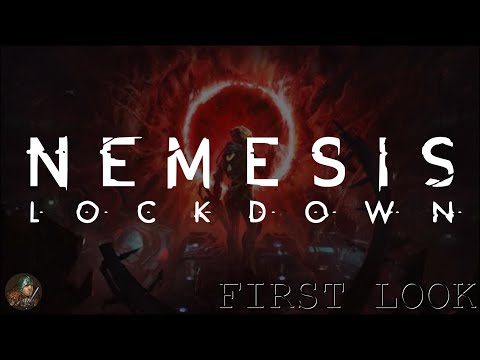 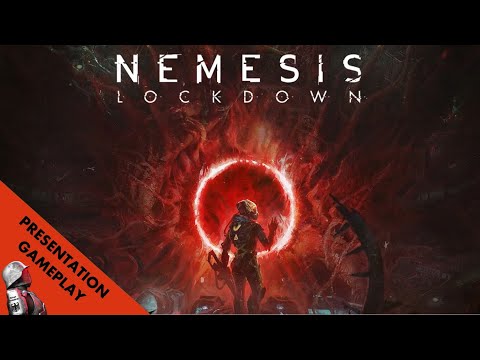 Eclipse
1,094 products in account
0
No one has rated this review as helpful yet