Virtual Circuit Board is the sandbox drawing-based logic simulator where you can build, program, decorate, and simulate anything from simple monochrome circuits to complex and colorful computers. Play with digital logic in this sandbox-only experience.
$14.99
Visit the Store Page
Early Access Game
Get instant access and start playing; get involved with this game as it develops. Learn more.
Most popular community and official content for the past week.  (?)
Update 0.1.2 - Ink Symbols Overlay
Jul 21

Update 0.1.2 - Ink Symbols Overlay
Hey all, patch 0.1.2 is now live bringing the Ink Symbols Overlay to make it easier to visually identify Inks without relying on color alone. The update also allows the simulation speed to be manually inputted and introduces other small quality of life changes. You can check the full list of changes below.

Additions
- Toggleable overlay of symbols on top of inks to improve accessibility. The overlay becomes visible when the circuit is zoomed-in and can be toggled using the button next to the assembly editor toggle, the overlay visibility is remembered across sessions. Currently symbols are not displayed for traces and decoration inks but the ability to configure which symbols are shown and other options will be coming in the future.
- It is now possible to manually input the simulation speed by right-clicking the slider widget.

Changes
- The widget for the amount of ticks to jump during step mode now becomes disabled when the simulation is not paused.
- The TPS label no longer oscillates at low tickrates.
- The Hovered Ink label is now visible during simulation.

Fixes
- Fixed a rendering issue with the selection tool that appeared for some players.

What's Next
Currently I've been working on the UI rework and refactoring to lay the groundwork for upcoming features, the next update is expected to show up on the beta branch until the end of August. Also there's now a roadmap listed in the official Discord[discord.gg] if you would like to know what is planned for future updates!

Virtual Circuit Board
58
2
Suggestions/Improvements
Loving the sandbox and having a lot of fun with it. However I do have a suggestion or two that might improve the experience. - Working with VMem is pretty obtuse and hard. Some love there would really help. Entering arbitrary coordinates for the input/output nodes isn't great. I really hate how I can't move around the workspace while also having the VMem overlay active. Activating overlay, moving viewscreen, activating overlay again is a super painful flow. If it worked more like a normal component would ...
14

chemical
Jun 6 @ 10:39am
General Discussions
Zoom in more
Is there any way to zoom in more? The max zoom in level isn't enough for me.
1

placeholder
Aug 1 @ 7:50pm
General Discussions
What would be nice for this game to have?
I think a game so powerful like this would really benefit to have a way for players to construct components that could be used in their projects circuits. So when someone creates a memory for example that in the canvas would take a lot of space, but encapsulating it in a small component to be used would allow more complex stuff as it will facilitate the construction of things. As when a components is made, it will be there always for use, say like in a player made tool box accessible in any project. So i...
8

Zentaki
Jun 14 @ 11:54pm
General Discussions
Mac version: here's hoping!
Hi, I'm...mildly obsessed with circuitry games, and have a YouTube channel where I review and Let's Play many of them. While I play on both Windows and Mac, my platform of choice is Mac, so I hope this release supports it. Thanks for developing the game and I look forward to trying it out as soon as it's available :-)...
16

The Basics
How to connect gates and components.

dbomblauncher2
View all guides
Manual
Hi. Is there a chance to have an external copy of the manual in PDF or DOC format to refer to while working with VCB? While that is open I cannot easily switch between the two.
7 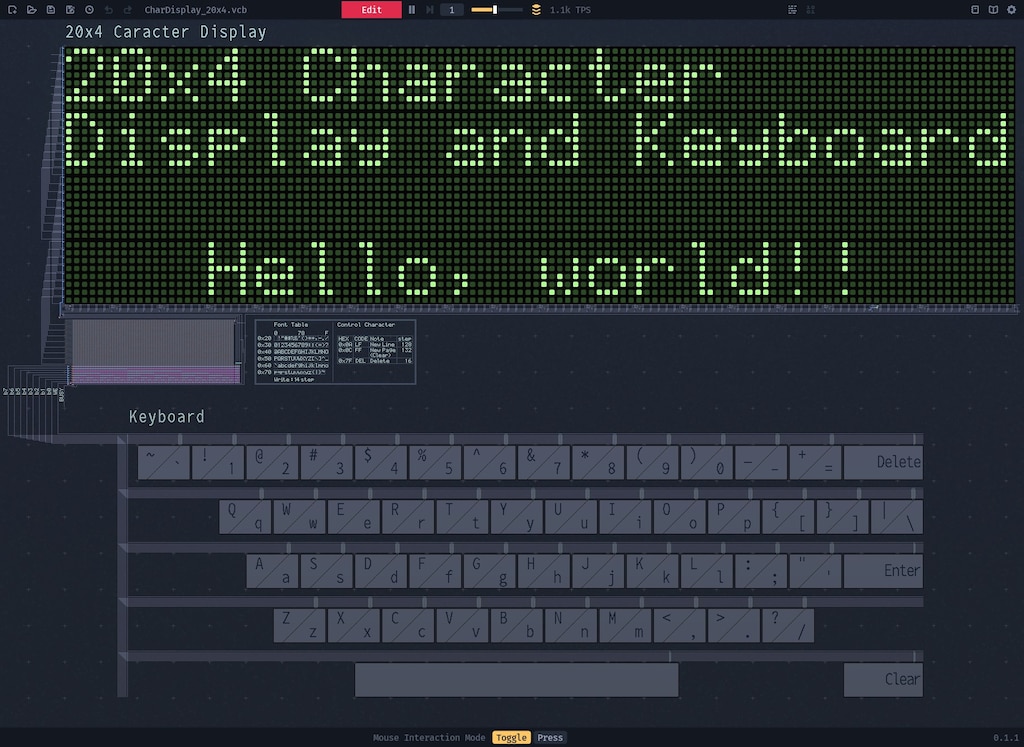 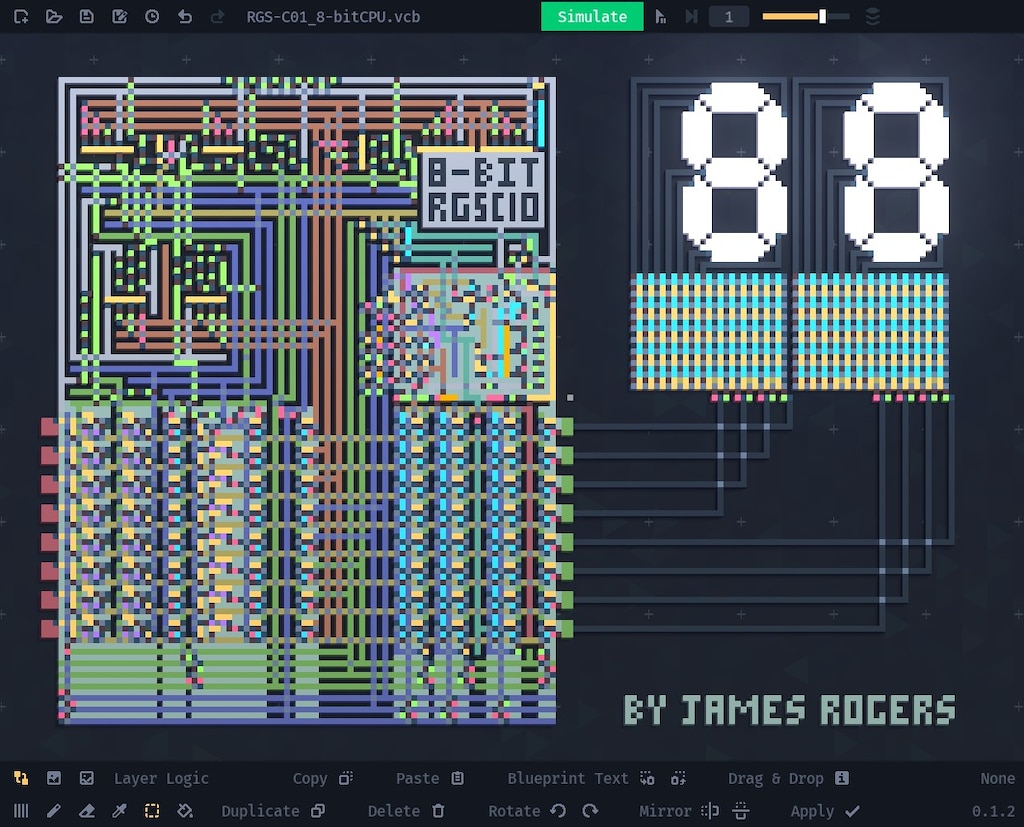 0
0
A fully functional 8-bit CPU that is 76x112 pixels. You can download the prime numbers demo at: https://github.com/Jamesrogers221194/VCB-Projects 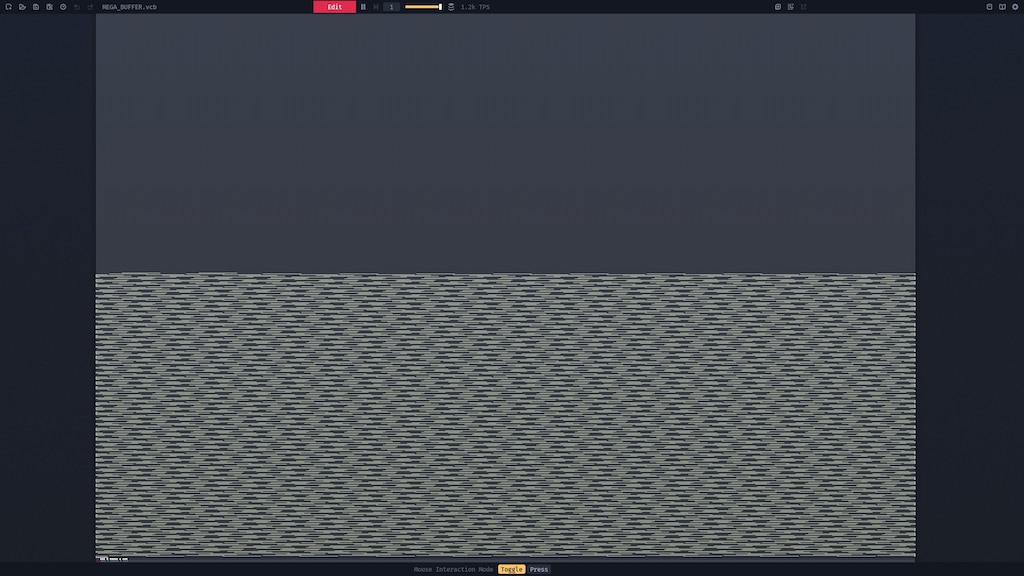 0
1
Trying to break the game Damn it can still run it ( 10 FPS ) This might take a while... Canvas is just full of BUFFER:s one after the other 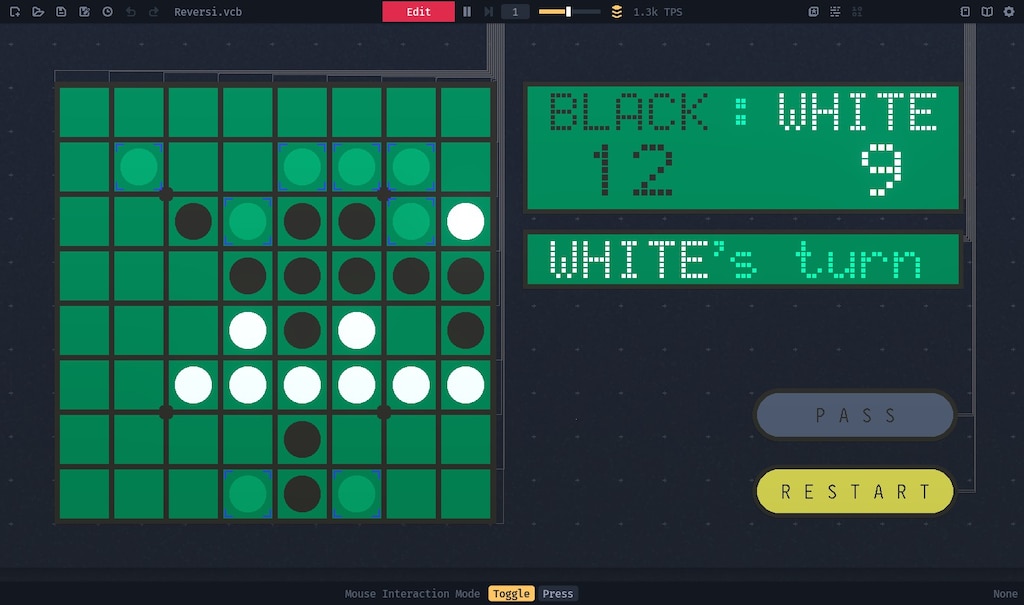 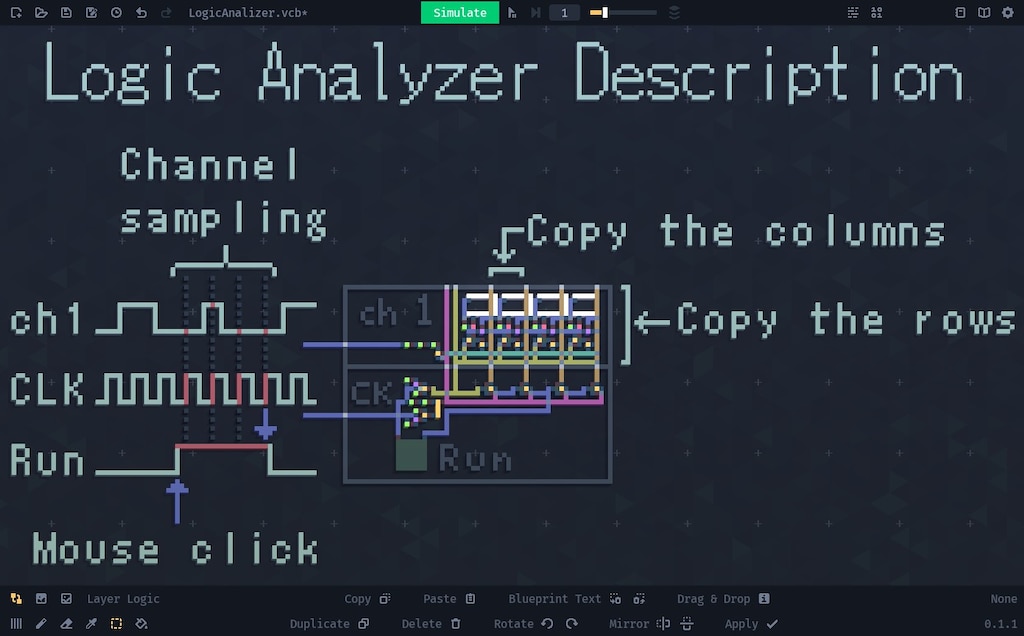