Page:
The page you see when you check the "Package Info" for the Capcom Fighting Bundle in the Steam Store.

In accordance with the above error, the “price of individual products” (total amount of the items included in this package) and the amount saved also showed incorrect information.

If you wish to receive a refund, please visit the Steam website below within the specified timeframe to put in a request.

We sincerely apologize for any inconvenience this may have caused you.
If you have any questions regarding this matter, please contact the Capcom Customer Support
( https://www.capcom.co.jp/support/contact/ ).

Capcom Fighting Collection
73
11
is singleplayer content worth it?
I assume online is dead so I'm just searching for excuse to buy it
3

uwu
14 hours ago
General Discussions
$40 overpriced?
Is this game worth paying $40 USD? Let me know your thoughts, opinion, and verdict.
277

How to Unlock Preorder Goodies
I'm guessing everyone's having trouble finding their preorder songs and art, so i hope this helps. (Try to be nice, this is my first time making one of these guides.)
29 ratings 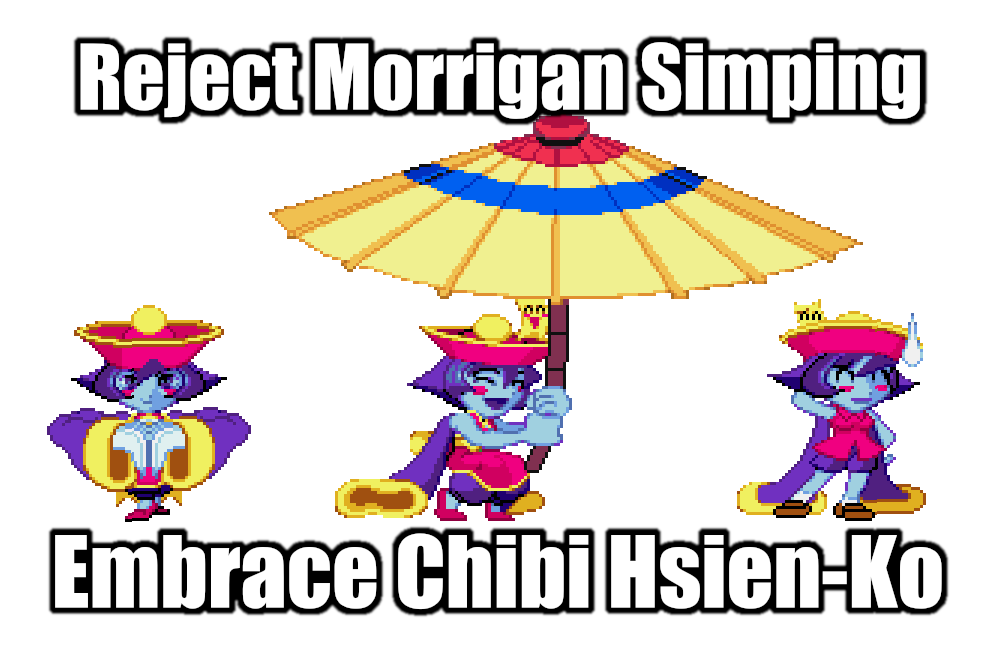 5
2
She is here to filter the artwork tab 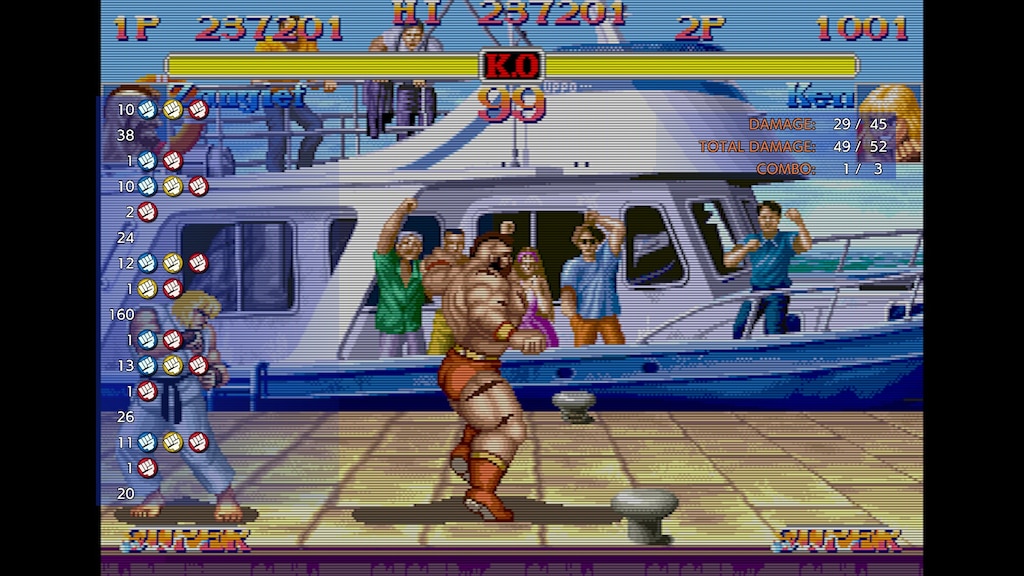 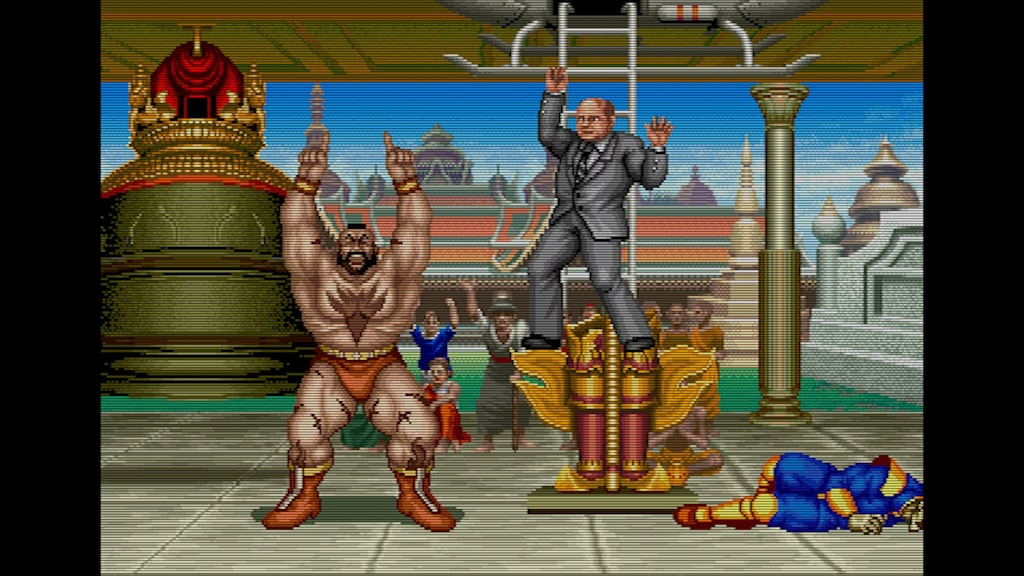 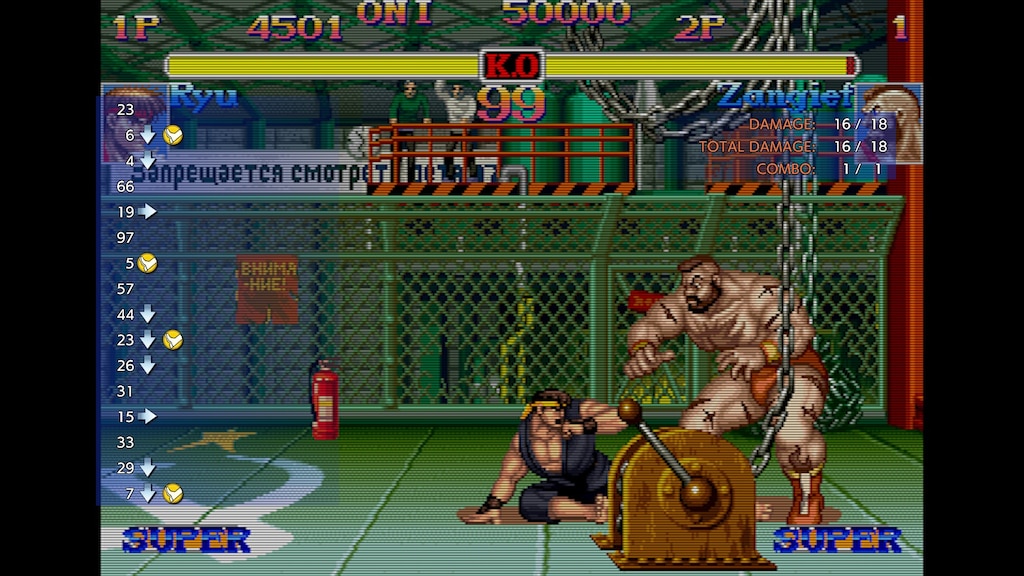 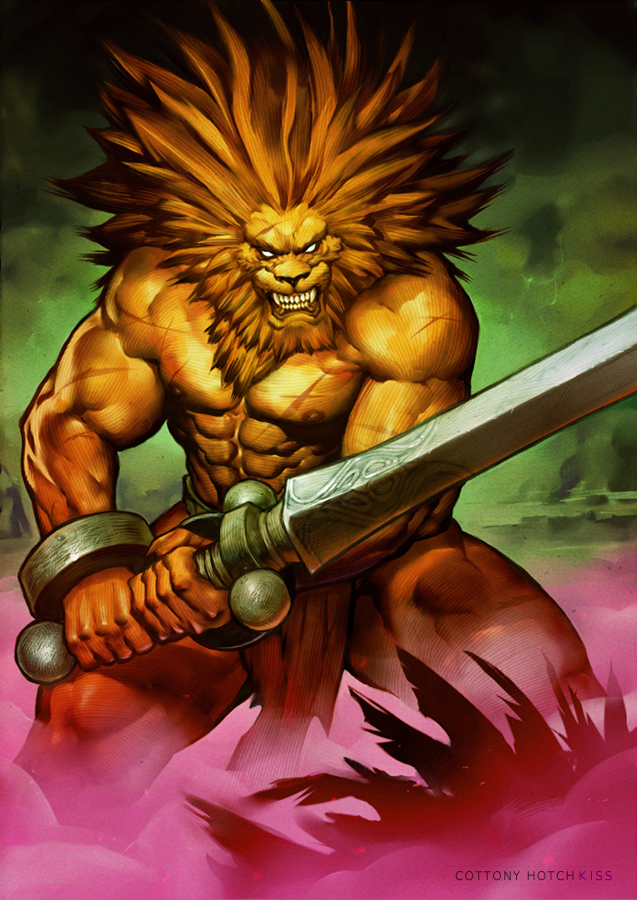 How to unlock hidden characters in Cyberbots (Original/Easy Select)
Since the original method of unlocking the characters through button inputs has a tight input window, I decided to drop the alternative method this collection offers here. 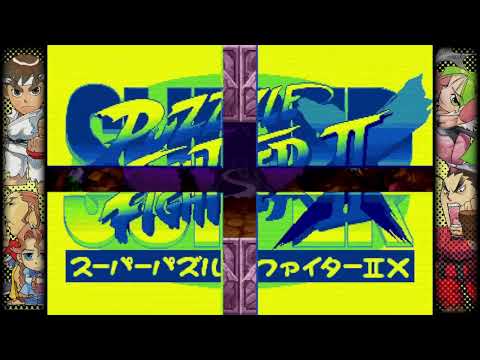 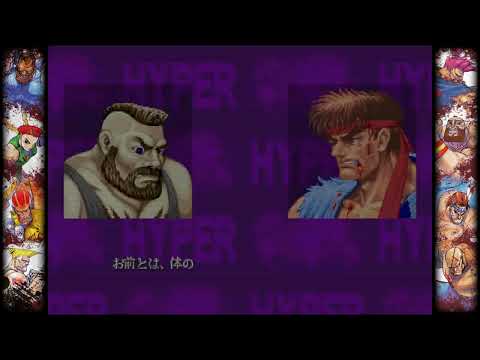 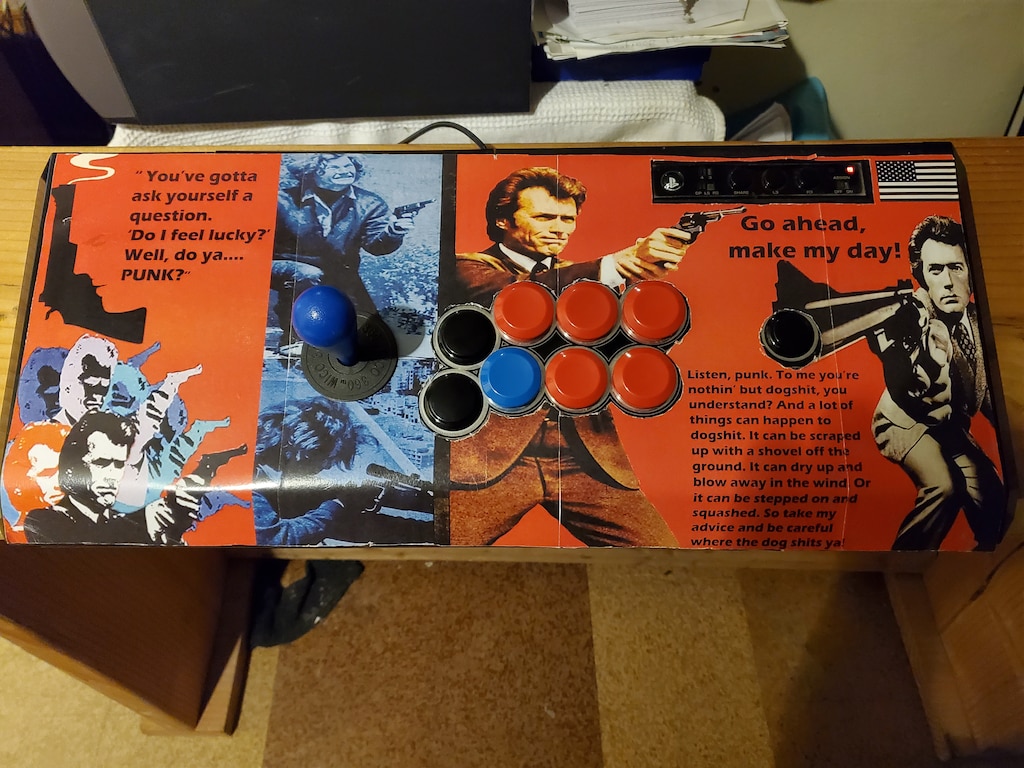 How to unlock hidden characters in Super Puzzle Fighter II Turbo (Original Select/Easy Select)
A quick guide to unlock the secret characters in the game through both methods, there's relatively few in this game, but they're quite unique for a Puzzle game.

Obtaining the "To the Scrapyard with you!" Achievement
A quick guide to the method I found easiest to unlocking this achievement, it's actually quite easy once you get the hang of it. 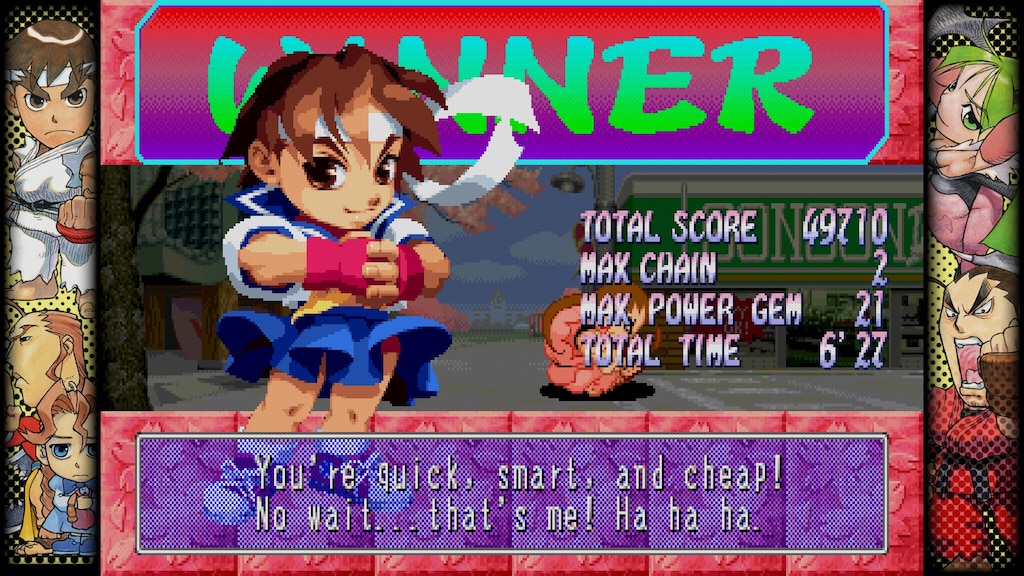 Josh The squash
View screenshots
Let's face it: these games need a graphic overhaul or a new upscaling filter.
How are these games supposed to look good on a 4K screen when their original resolution is 384 x 224? I mean, these ports should really implement some sort of decent upscaling. Games are really pixelated on a 4k screen and they don't look like the original arcade machines. This not only apply to Capcom Fighting Collections but also to the Capcom Arcade Stadium titles and the Street Fighter 30th Anniversary Collection. Please patch these titles to look decent on modern monitors....
60

Darunia
6 hours ago
General Discussions
Dead Online....
somebody hit me up if you're trying to do HSF2 Lobbies
20

Miss the good ‘ole days of stacking quarters at the arcade? Have a Darkstalkers obsession you want to share with fellow fans? Yeah, we do, too. Fortunately for us all, Capcom Fighting Collection is here to save the day - complete with 10 different fighting games that will transport players back to the arcades of the 90s like no other game collection can!

Here’s a quick tour of all the titles waiting to take players back to the heyday of arcades. 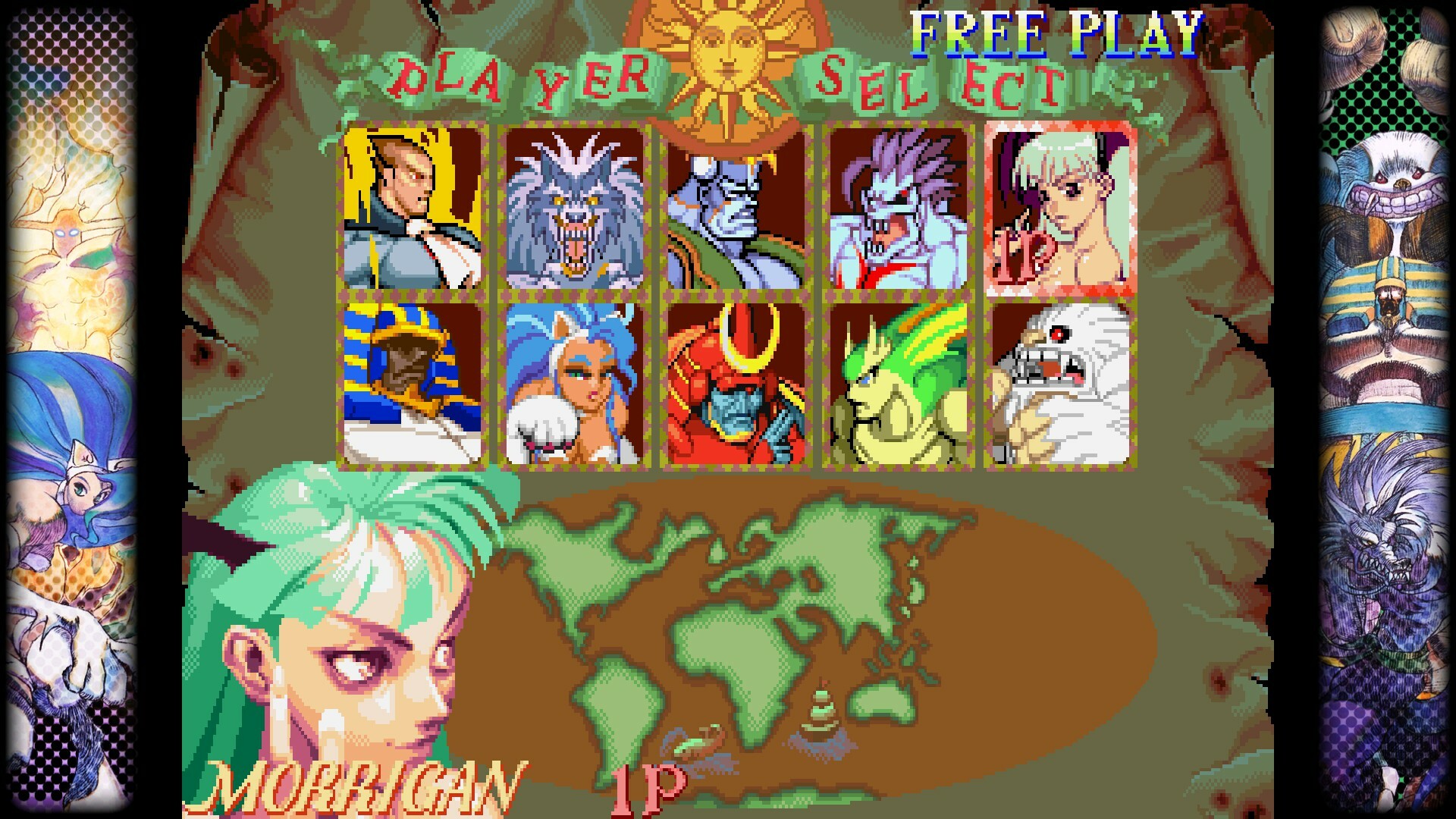 All 5 Darkstalkers – It’s spooky, it’s scary, it’s every game in the Darkstalkers series all in one haunting collection for the first time ever outside of Japan. From Darkstalkers: The Night Warriors (1994) to Vampire Savior 2: The Lord of Vampire (1997), players can select fan-favorite characters such as the charming Morrigan and exuberant Felicia, or take a stab at more specialized characters like the deadly Huitzil and aquatic Rikuo. There’s no need to wait for a full moon to play Darkstalkers when you can play them now. (Note: Vampire Hunter 2 – Darkstalkers’ Revenge and Vampire Savior 2 – The Lord of Vampire are only available in Japanese). 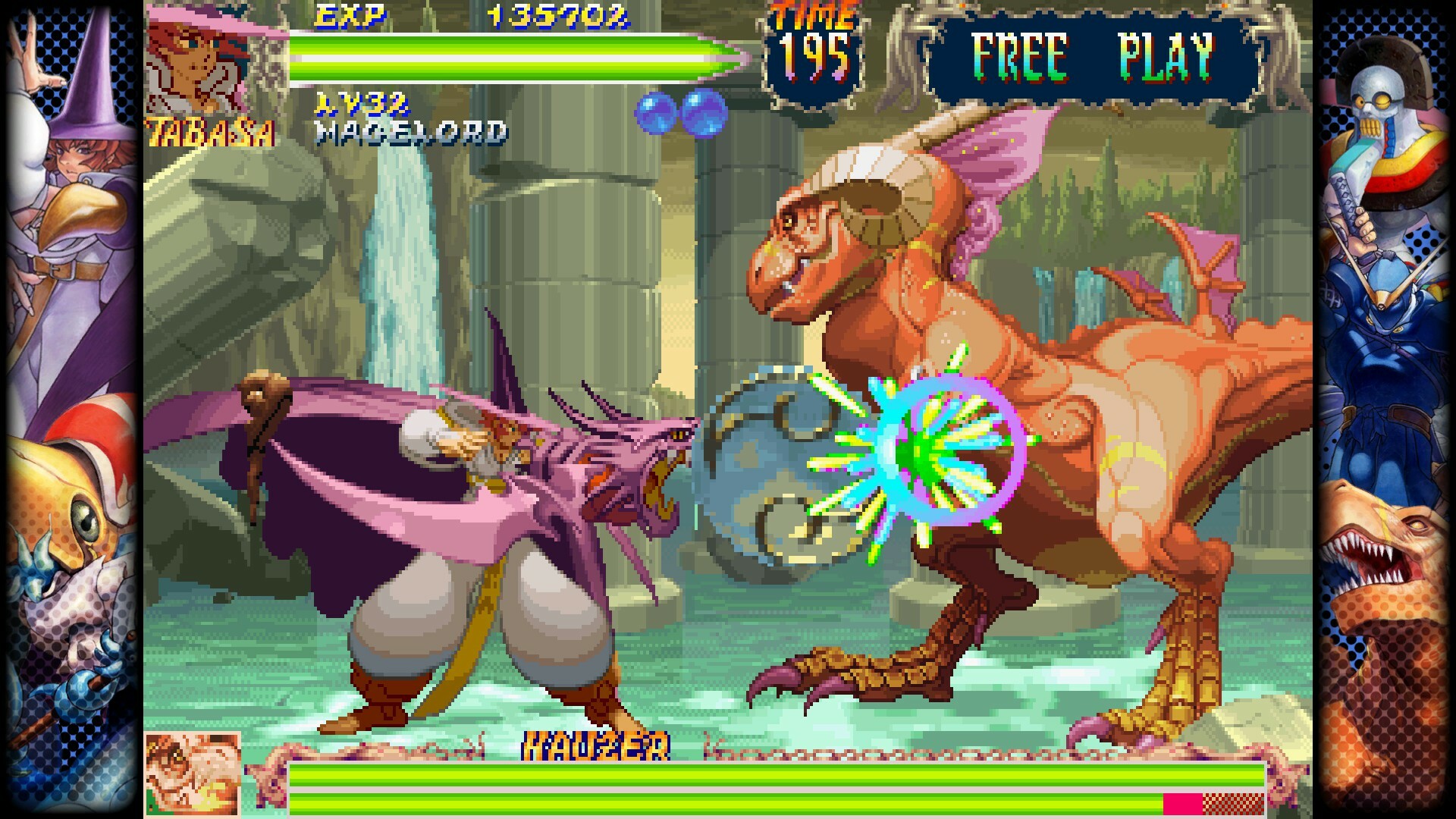 Red Earth – A unique fighting game with an RPG-like system is making its debut outside of arcades. Red Earth, also known as War-Zard in Japan, has fantasy-inspired characters like the witch Tessa and the lion-headed king Leo. Thou can select either the single-player Quest Mode or the two-player Versus Mode depending on thine preferences. Dost thou have what it takes to save the kingdom of Greedia? 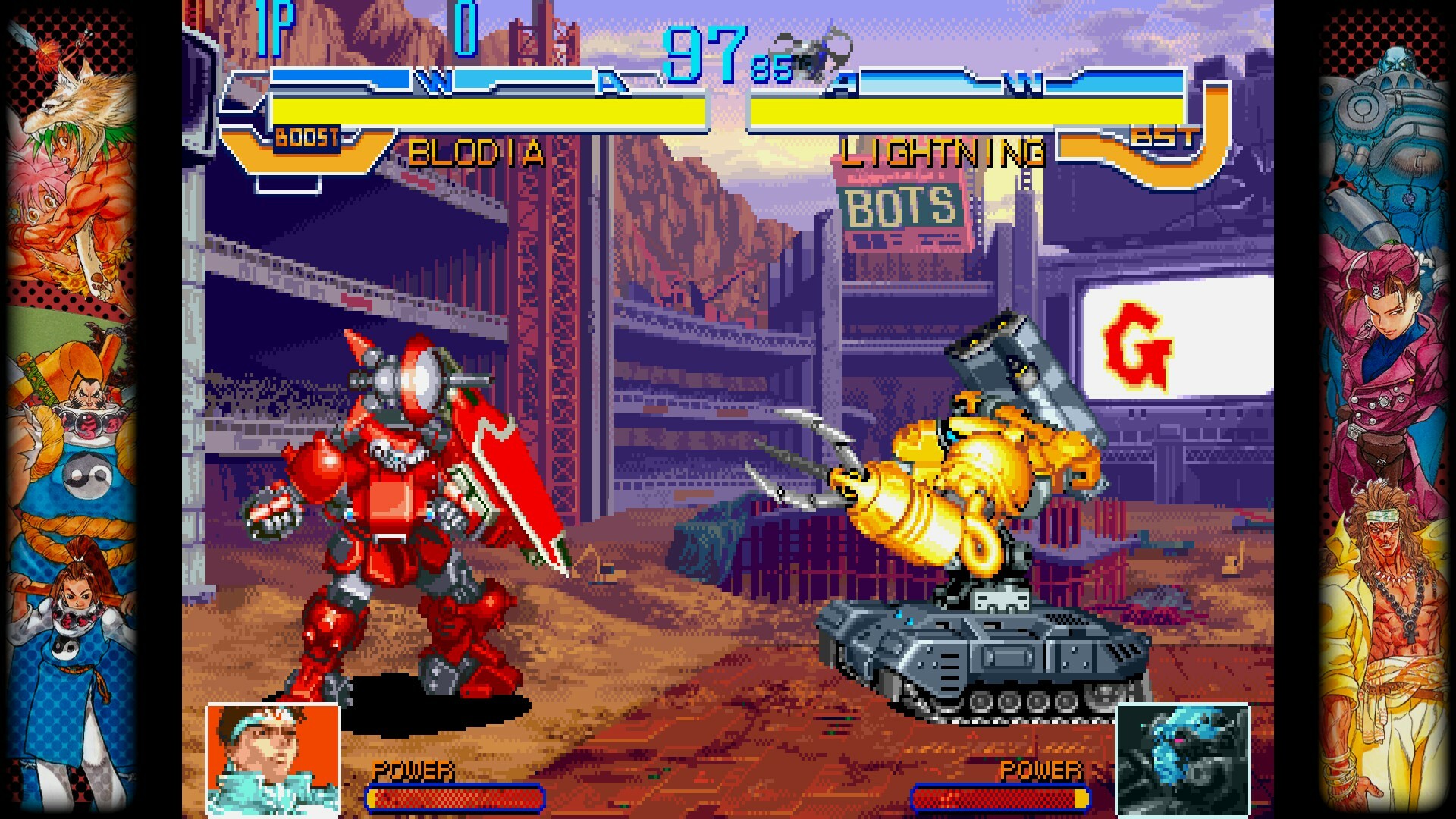 Cyberbots: Fullmetal Madness – Many Capcom fans might know Jin Saotome, but few have played the game he hails from. Cyberbots is another unique fighting game where players select the pilot along with the Variant Armor. While the pilot controls the story, the Variant Armor controls the move-set. Players looking for massive space battles with mechas need not look any further than Cyberbots. 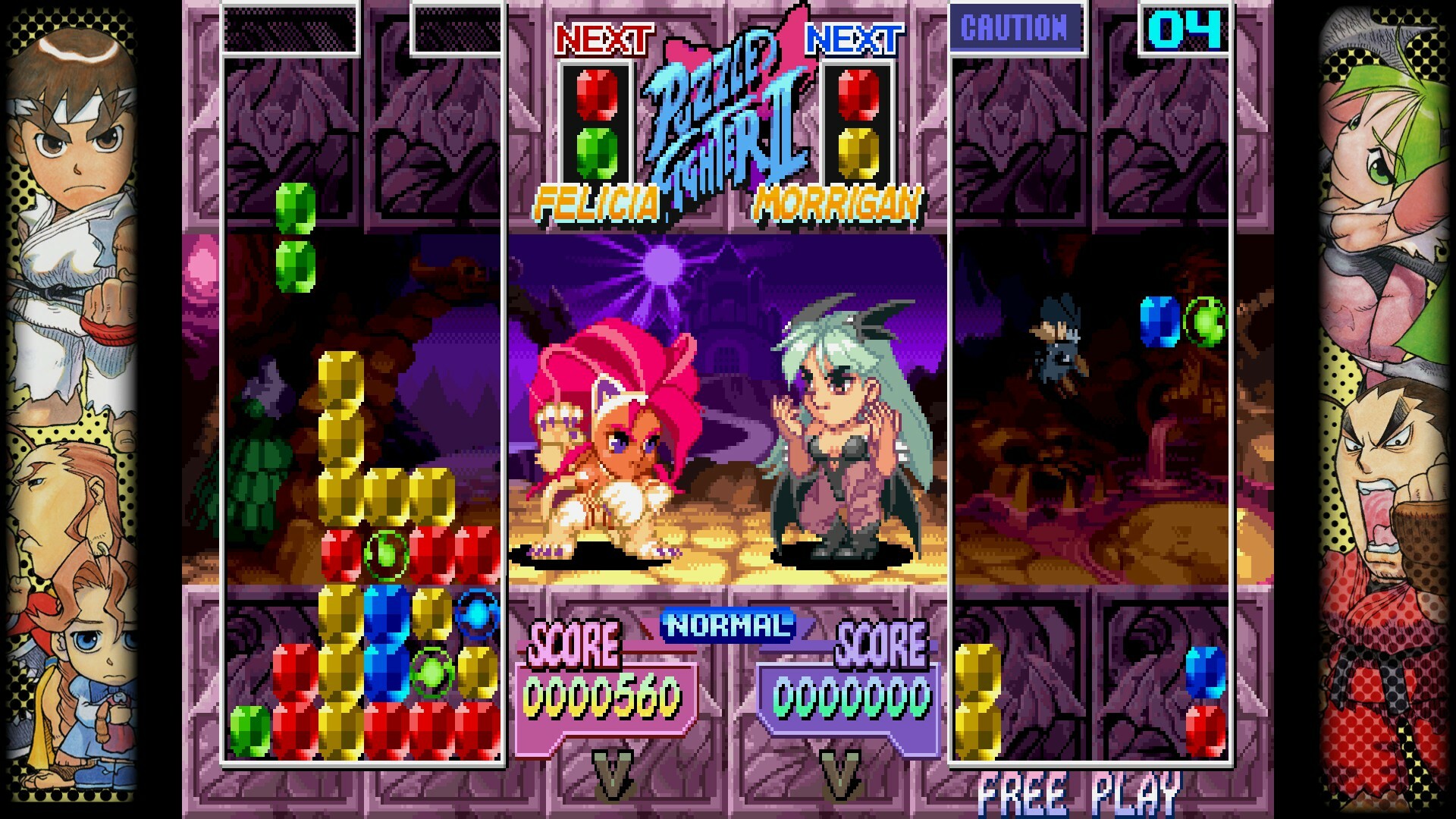 Super Puzzle Fighter II Turbo – Puzzle fans, unite! Characters from Darkstalkers, Cyberbots, and Street Fighter go head-to-head in this puzzle game where players must match blocks of the same color in order deal blows to their opponent or to simply survive. Be wary of the glorious diamond piece, which can end the game in one fell swoop. 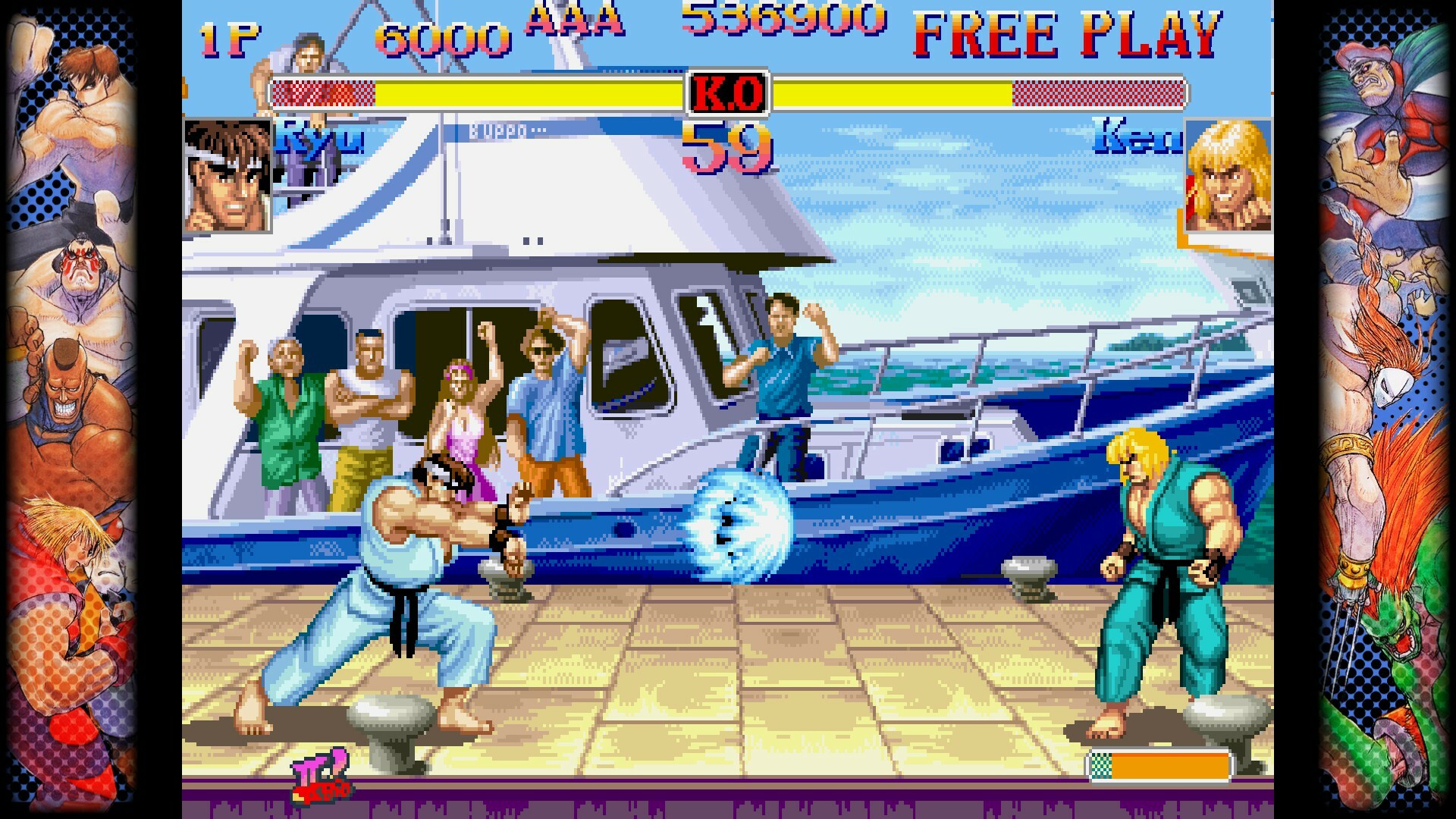 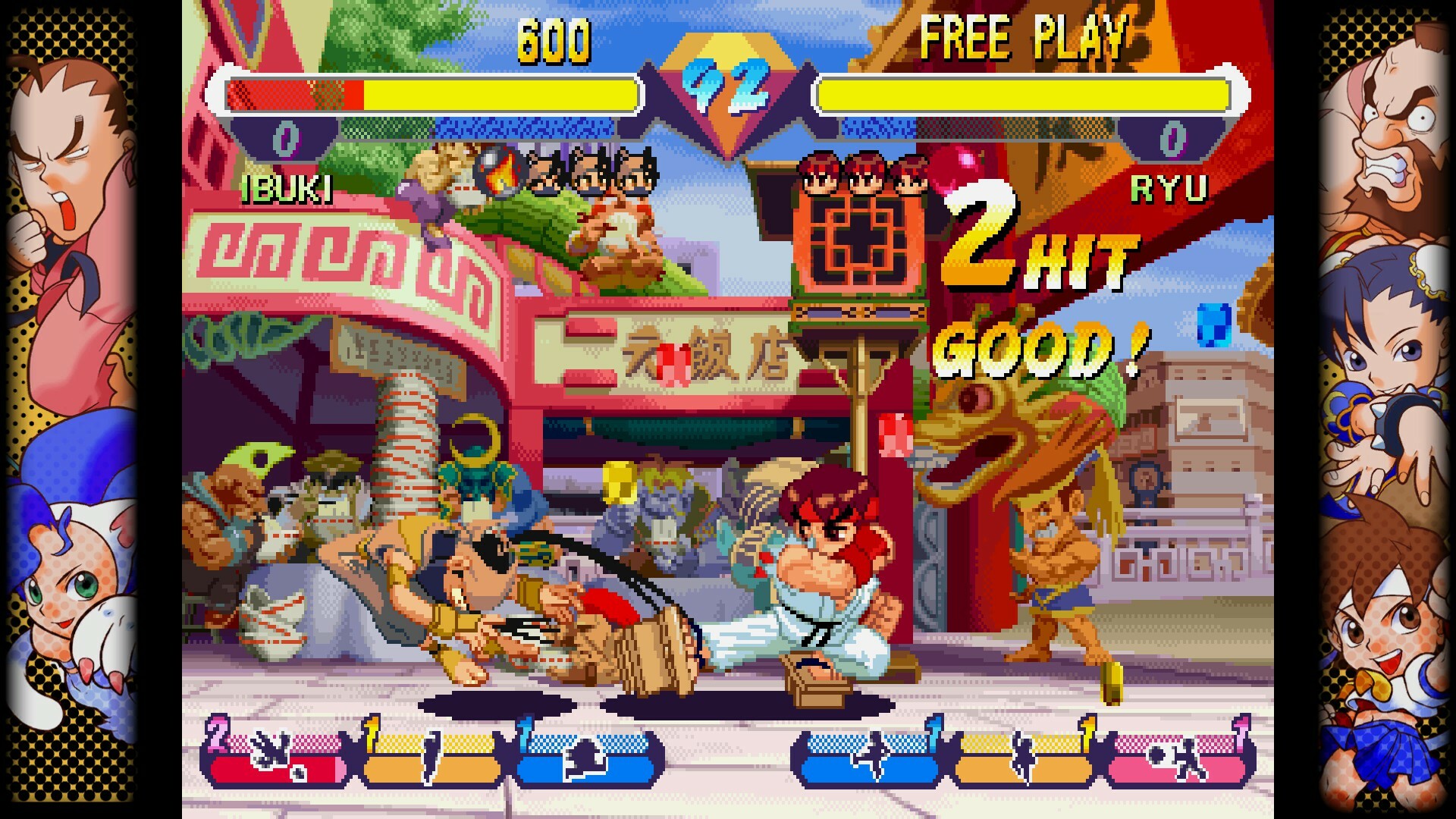 Super Gem Fighter Mini Mix – Featuring “chibi” designs for characters from Darkstalkers, Street Fighter, and even Red Earth, this chaotic – and very cute – fighting game is chock-full of power-up gems, elemental orbs, and treasure chests that can turn the tide of any match.

Well? What are you waiting for? Go out there and show everyone what a collector you are and play Capcom Fighting Collection! There’s also bonuses for early purchasers of the game like special illustrations and exclusive music tracks arranged by CAP-JAMS and other music artists. Purchase before September 30, to receive these bonuses! You can also receive THREE WONDERS in Capcom Arcade 2nd Stadium if you purchase Capcom Fighting Collection during this time. Play Capcom Arcade 2nd Stadium on July 22, 2022!

Recommended
4.5 hrs on record
With this purchase we better get DarkStalkers Capcom

Recommended
0.7 hrs on record
Bring these titles back Capcom please!!!

Recommended
4.2 hrs on record
I got the game for Pocket Fighter, but I stayed for darkstalkers. It is a really nice polished interface and good collection. It actually corrects some complaints from the Street fighter 30th anniversary collection. The music is great, the online plays great, but I would like to find more people to play. It is quite a nice well packet collection.