If you ever dreamed of exploring space at a relaxed pace, here's a journey designed for you.
Visit the Store Page
Early Access Game
Get instant access and start playing; get involved with this game as it develops. Learn more.
Most popular community and official content for the past week.  (?)
Update on August 14th
Jul 31
Hey everyone!

We are making good progress for the big coming update and finally have a date for it. It’s finally coming on Saturday, August 14th, at around 13:00 UTC. We have successfully completed internal testing and will begin beta testing within a few days. Given how things are going so far, we do not expect any major bugs anymore. Nevertheless, as the update is quite big, we want to take enough time for testing to make sure everything goes smoothly upon release.

We would also like to apologize to everyone who has been patiently waiting for the update. We know it’s been very long. We had so much we wanted to include that our timeline has virtually exploded. Game development is a learning process for us and the importance of maintaining a good update schedule is something we are much more aware of now. Future updates will be more frequent and bite-sized.

For anyone who wants to have a chat, we will be available on our social media channels, particularly Discord and QQ, for the rest of the day. Please feel free to drop in, we would be happy to see you there.

Space Travel Idle
61
8
stuck on mercury
I've been building mercury for three months in a row. I've learned almost everything I can. but there is no next planet. there is a suspicion that I need to kill the boss 9 or 10. and if so, how can I do it? (health is at the maximum, and I still get a oneshot)...
1

ignativ.fox
Aug 2 @ 3:42pm
General Discussions
Sliders glitched?
Woke up this morning to check my progress, and suddenly the sliders are borked. If I click on a slider on either the overview screen or the cards screen, it immedately starts moving the slider to the right, no matter where I start it from. The energy slider is also jumping to the right (seemingly to a random value) whenever I do something affecting energy - turn on/off research, infra, etc. Anyone else having this issue?...
1 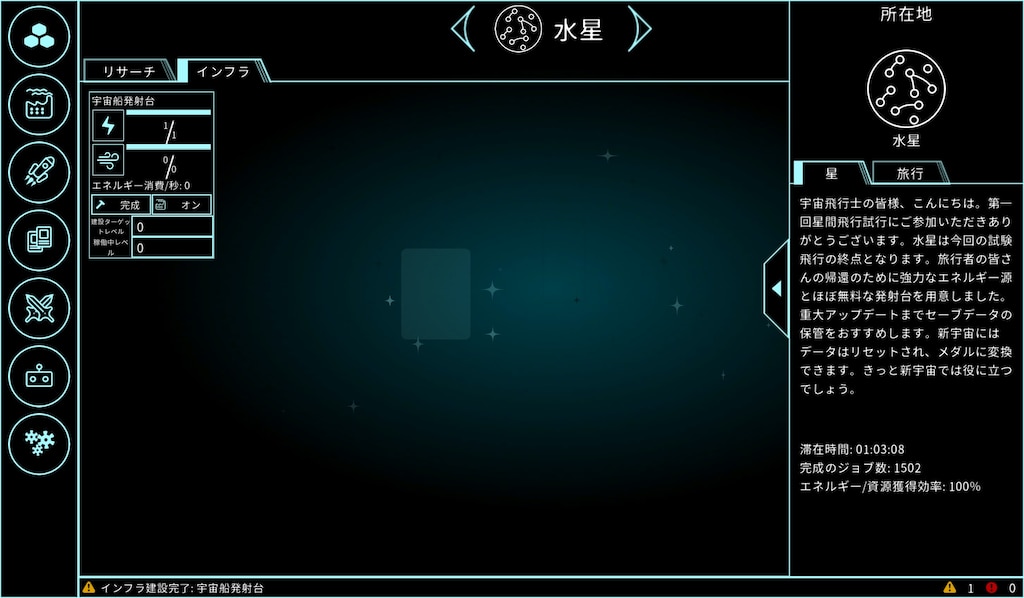 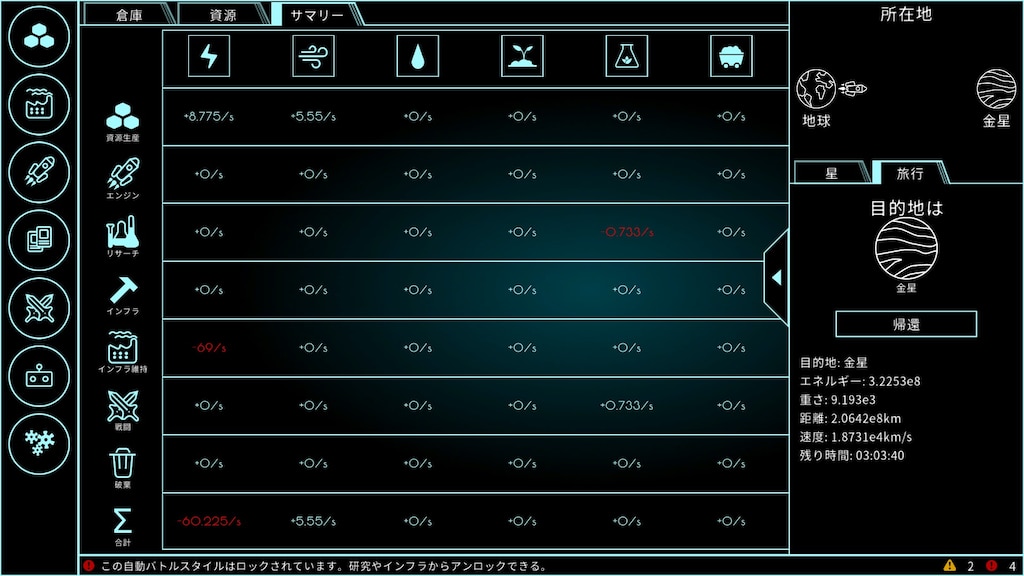 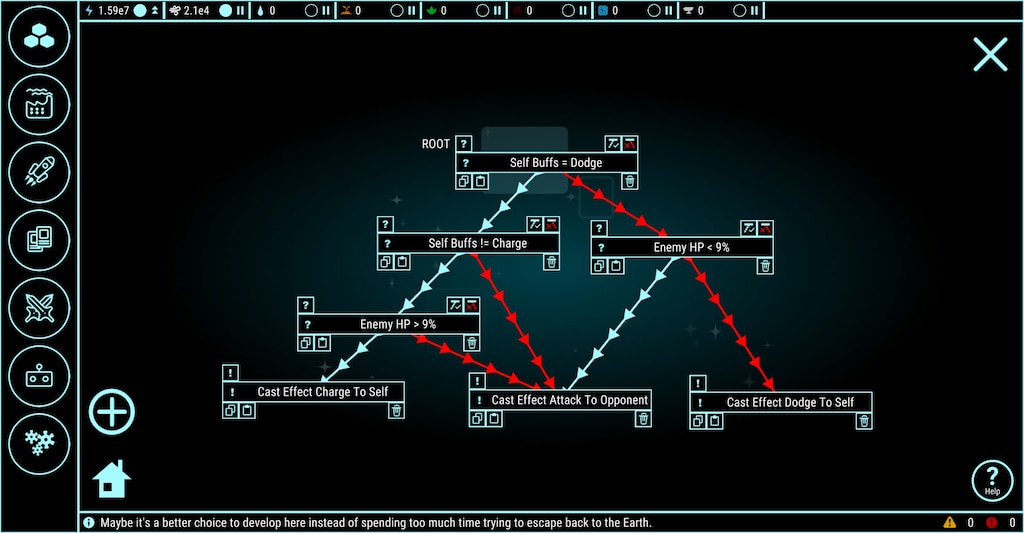 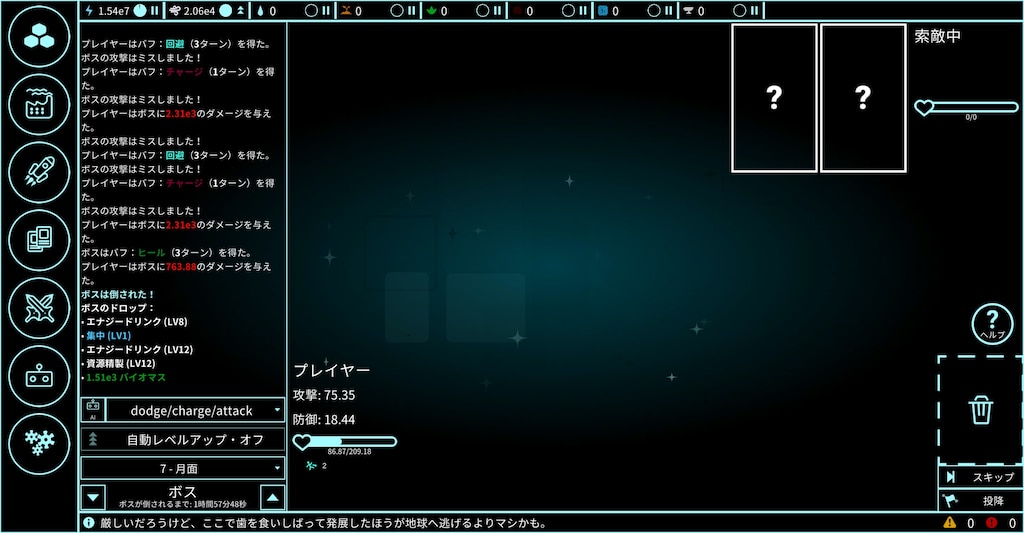 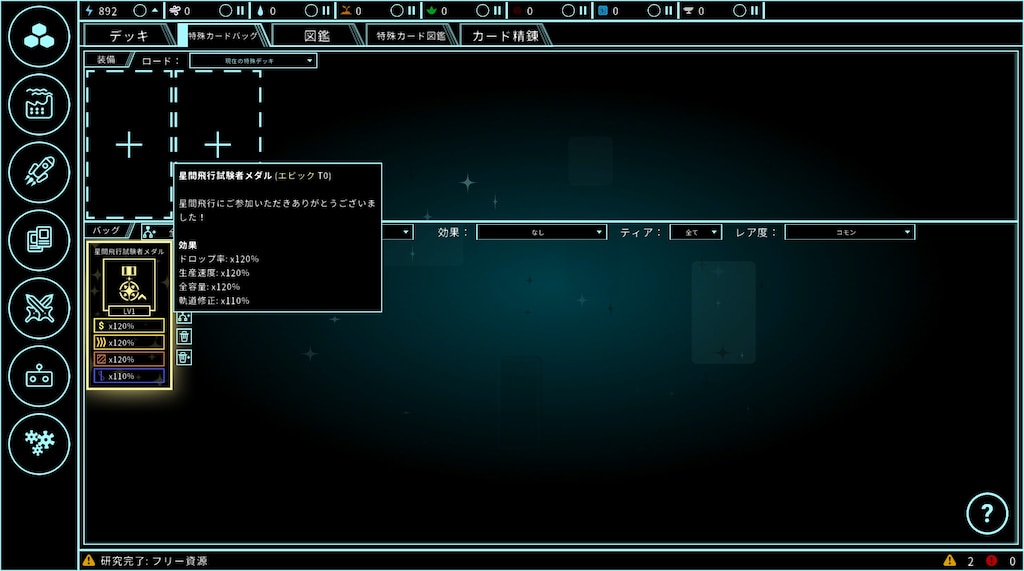 Techtree
Techtree as Mind-Map, SPOILER! (If you don't want spoiler I'd recommend to join the STI Discord and look into #guide.)

A Bored Guy's Guide
A guide to Space Travel Idle that is probably more accurately described as my personal notes for the game, but figure other people could benefit from as well.

VoidRedWolfy
View all guides
Sun
Is it me, or am I missing something? taking only the minimum iron (3e4) and no other ressources using the Lightweight Spaceship level 5 card and the Test Pilot medal (trajectory optimization x1.1) with : lvl 1277 space folding (space folding x1.439) lvl 100 trajectory replan (trajectory optimization x5) (and engine energy at 1e10) i still need 24 days to get to the sun......
38

hellminister
Jun 18 @ 12:43pm
General Discussions
Strategies for bosses 8 and 9
Has anyone beaten these? And, if so, could you provide any advice. Currently i have nearly every tech and infra maxed out ( within 10% or so at least, the last levels are the longest.) Boss 8 still 1 shots me after charging on every attempt. I COULD go for the infinite dodge strat but needing over 90 turns to kill at 45% dodge i would be dead of old age long before succeeding, if he doesn't have heal. If he does it's literally impossible with that strategy. Boss 9 poisons and burns me for more damage ...
25

We hope you’ve all managed to get through the first half of 2021 safe and healthy. We have spent the last months working hard to improve Space Travel Idle. With the help of a lot of great feedback from all of you, the next update to the game will entail a number of (for us) exciting new features:


An optional tutorial
First off, we find that players often struggle most with the first few play-minutes. This became clear from feedback in the review section of Steam but also from our friends and family; we have heard that the first few minutes are entirely overwhelming. Therefore, we created a tutorial system that makes it easier for players to understand all basic elements of gameplay in order to “get going”. That being said, players who prefer to “explore” on their own, who prefer to figure things out without an extensive tutorial, will naturally be able to opt out of it. This has taken much longer than we wanted due to some struggles with the Unity Game Engine, but we are now confident that the tutorial adds significant value for new players. 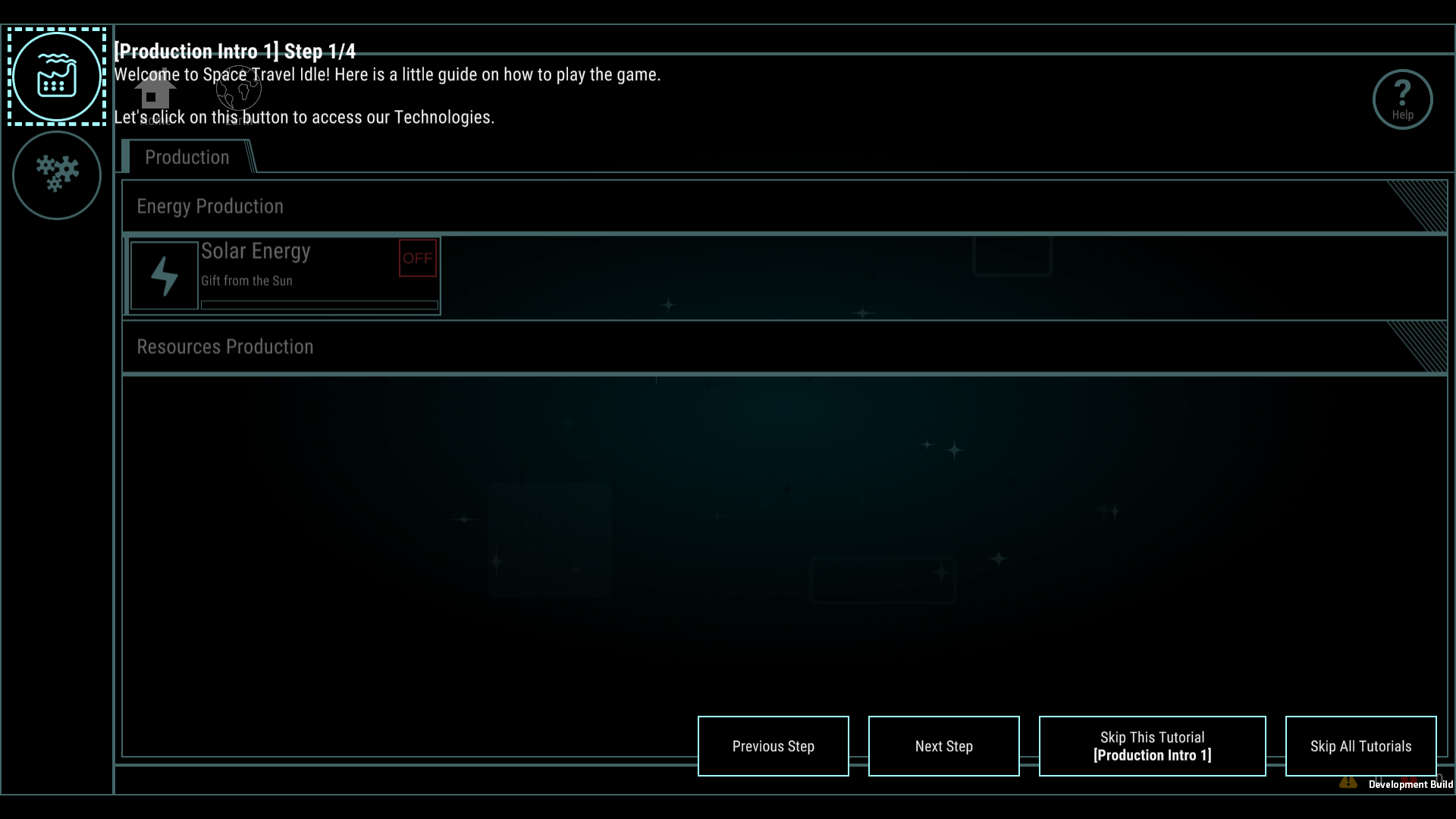 A modular prestige system
Another pain point is that the game starts to feel slow and “grindy” over time. Of course, idle games are not meant to be fast-paced, but they are also not meant to be boring. The game should remain engaging even over time. We have reworked our balancing (which is, in all honesty, still a Work-in-Progress) and added a modular prestige system to improve the feeling of progress at an enjoyable rate. Players will be able to prestige and “restart” the game with additional perks which they can pick themselves. Some might want to improve their stats in battle, while others might want to improve their resource gains. As later planets become more grindy, the prestige should make it easier, faster, and more enjoyable to travel through space. The modularity will make it possible for players to make it their “individual” journey. 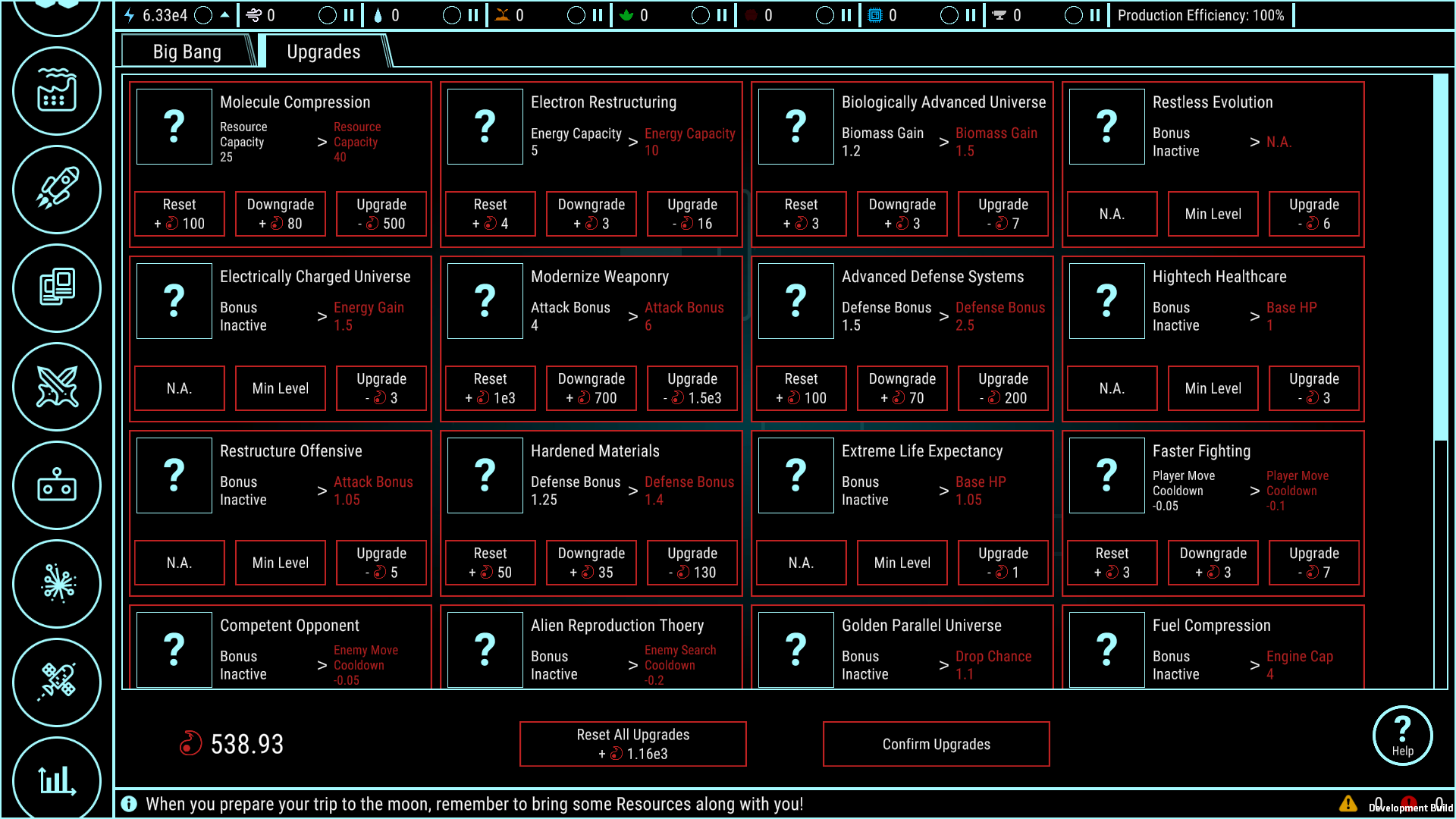 Card Alchemy
So far, cards were mostly collected through either battle zone success or Card Forging. The next update will include a third source of new cards, Card Alchemy. With Card Alchemy, you will be able to combine different cards (and some mystery-inputs) to create entirely new, very powerful additions for your decks. We believe that this will add another enjoyable layer of progress and the ability for those of us who enjoy collecting complete decks to create a unique collection. 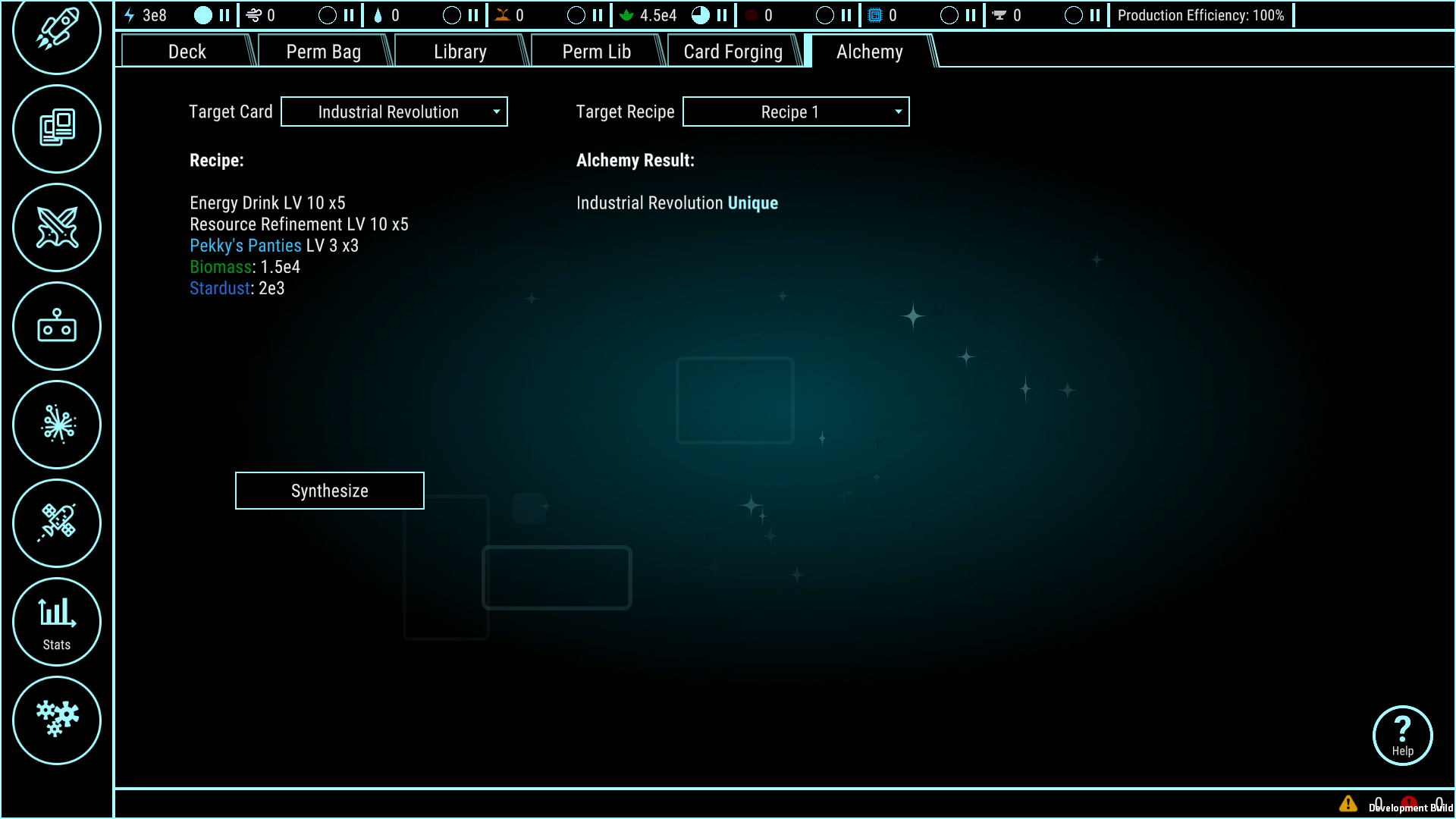 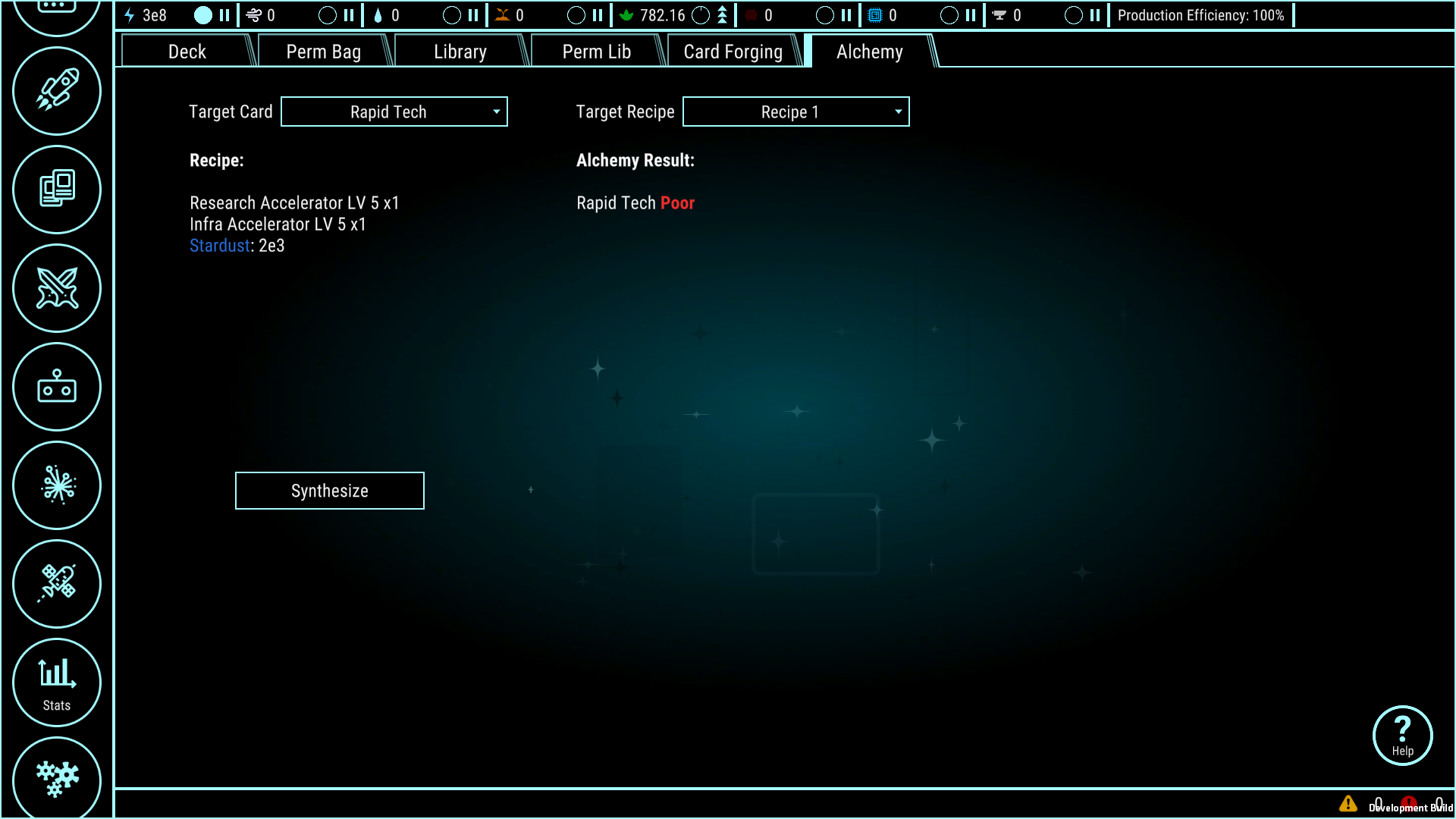 Stats Tracking and Challenges
Progress in Space Travel Idle was often hard to measure. We want to improve on that issue by making your game stats easily accessible (and a little nice to look at). This is going to be an ongoing Work-in-Progress, but we do find this a very important addition for a game that gives a rewarding feeling when progress is made. Furthermore, we really hope that you will enjoy trying to complete the challenges that await you. 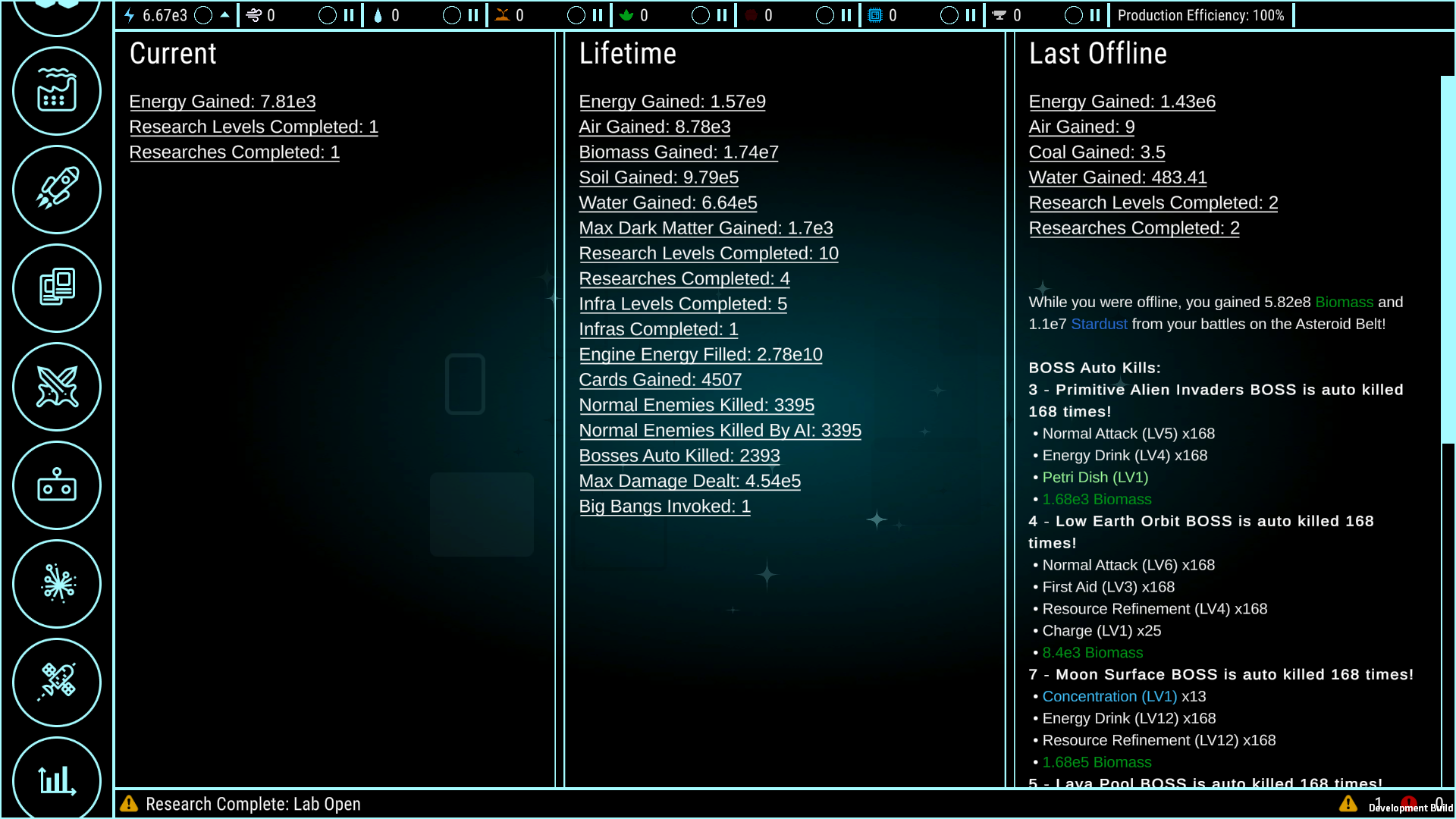 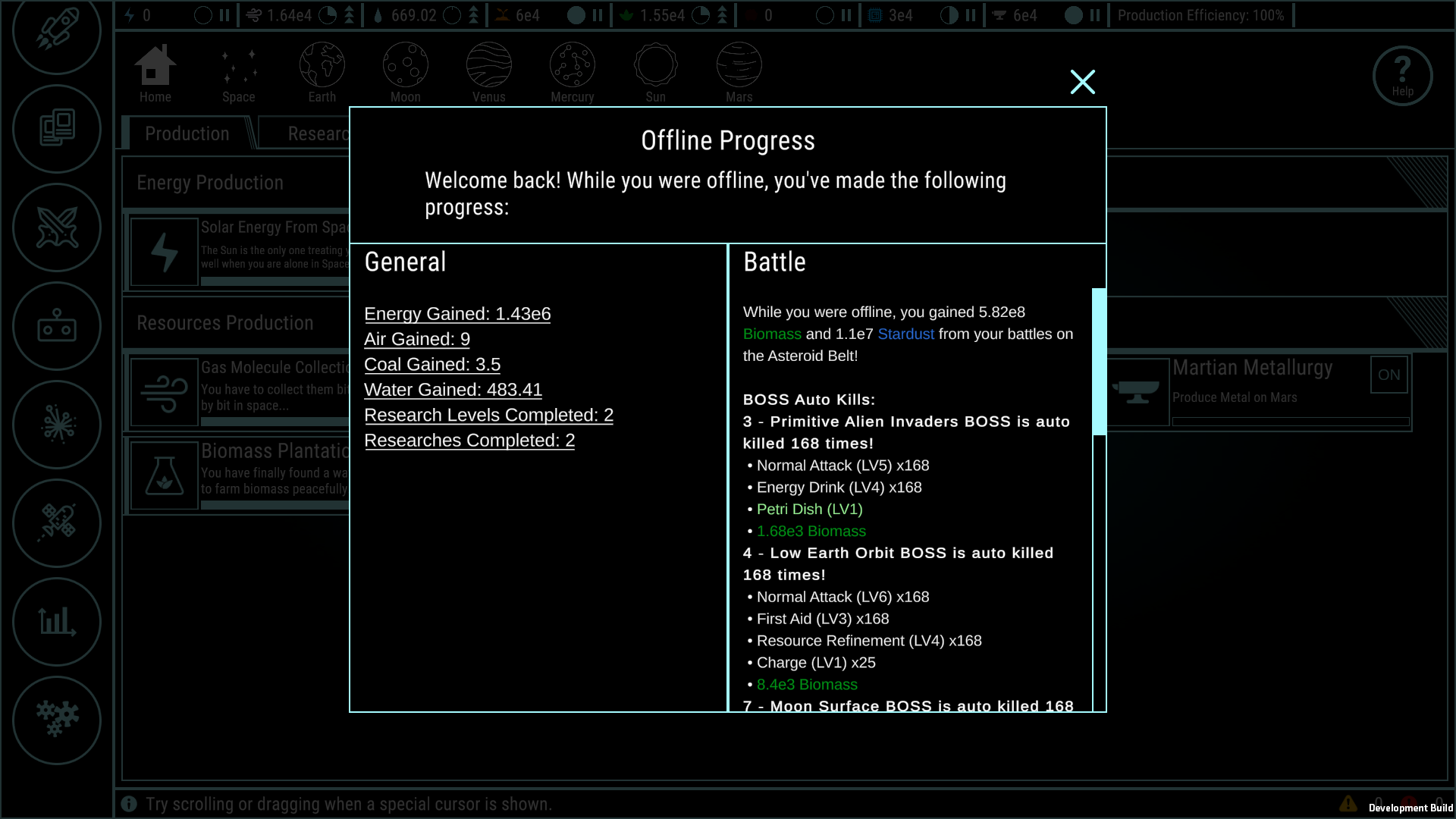 A lot of content
The current version ends with Mercury. The coming update will include all planets until including Jupiter, with more content ready to launch progressively with upcoming minor updates throughout Summer. Beyond planets, the next update will also include a very large number of new battle zones, cards, and more.

Our ETA for the coming update is most likely within July, with all remaining planets (and a certain dwarf planet) of our solar system by August. Some roadblocks, such as tricky bugs, server construction, and Covid-related delays, have pushed our timeline back a lot so far, so we hesitate to announce a fixed date just yet. However, it is important for us that you know that we are still here and that the next update is coming very soon. Thank you all for your patience!

How to start a journey
Escape from earth (the easy way)