Gameplay: ☆☆
I was very disappointed with this games overall puzzle structure.
You basically click buttons until something works, or you have to talk to an NPC to get an item that will win the match for you.
If you are walking into this game thinking it will be like Monster Girl Quest, you will be disappointed.

Art: ☆☆☆☆
On the art side, this game is solid. Good presentation and direction.
Very Impressive style.

Sound/music:☆☆☆
Nothing Impressive, It has a little bit of voice acting so that is a plus.
Sex SFX seemed to be low quality or badly mixed.

Overall. Save your money, its not worth it man.

Kpop Jones
644 products in account
0
Stuck on dragon
Despite being thoroughly unimpressed with this "game" I want to at least finish it, but unfortunately I have no options for defeating Dragon. Attacking or dodging results in death (each of the seven times I have done this and none the traders or the tavern open up any conversation options to progress either....
3

Not Recommended
3.2 hrs on record
TL:DR: The game isn’t worth it. if it was on sale for £5 or less, maybe. But for seven? No. If you’re after a text based smut game with added images, Go investigate Corruption of Champions (also on steam)

Art: 9/10 fantastic, this is probably the biggest positive about the game. The art amazing, there are sometimes where it doesn’t match the scene or is just re-used, or placed where some extra detail could have been used. But its still amazing

Writing: 5/10. The writing isn’t mediocre, its hit and miss, sometimes it fantastic and nails the humour and style. Other times its spectacularly underwhelming or just outright missing the mark.

Sound: 4/10, The BGM is just grating, I wish I could mute it. Sound effects wise, they are played once. There is very little voice acting, Only one character has it.

Plot: 4/10 Humour abounds, the story ‘makes sense’ mostly (what did you expect), Its no Monster Girl Quest. But nor is it a pointless splattering of smuttery. It does fall down at the end.

‘Plot’: 6/10 I expected so much more, the writing was….barely passable and the side-bar and inability to change scroll speed or text size let it down so much. Each town npc gets 1 scene, each fighter gets a loss and a win scene. Non replayable except via saves (you only have 3 slots btw)

Interactivity/combat: 2/10, dialog choices don’t matter (what rare few you get!) combat is just trail and error. Its underwhelming and doesn't really reward you with anything.

Pros: Its fast to play, I blitzed through every ending and scene in just over 3 hours. The humour is good (sometimes) If you’re just after a quick and easy smut, then this will tide you over. Maybe. The art is amazing, If this was a comic, I’d be far happier.

Cons: There is only one ‘true’ ending, all the others are just “You made a bad choice. Hah!” (Unless your kinks are implied gore/guro). The in town NPC’s are basically there for a single scene then to just provide quest items or advice, They don’t get to take part in any of the endings. This actually irked me, as I honestly preferred one of the town NPC’s to any of the fighters. There is no scene gallery, only 3 save slots. If I was to give my opinion, it was as if someone started to write the game, starting with the first NPC and wanted to actually have romanceable NPC’s where your choices matter ect. Then just canned it all and went ‘humour and sex!’ The first NPC you meet in the tavern is the only one with dialog choices, and those seem to have no impact. This is also one of the wittier and sharper NPC’s, interaction wise. The other town NPC’s consist of ‘stoic bashful weapon smith lady’ ‘gremlin alchemist who gets high of man smell’ and ‘the armourer who’s a chick with a ♥♥♥♥. Expect ♥♥♥♥ puns’ That isn’t even to get in to the fact that sometimes when you click ‘next’ it’ll produce some more scene text then scroll right in to the next scene, wiping the logs (the logs that are oft wiped so don’t even think about trying to look back at them.) Or often it seems as if there’s a coding error Several buttons read “Next.” Or “Ok.” But then had ‘.choice-more-‘ right after, as if there was supposed to be a second choice, but it never got coded or made and just got left in there.

I have far more complaints about this game than I do praise. If you are after a non-interactive smut game, Go grab a Visual novel and its translation pack. If you want a ‘combat’ smut game, Go play monster girl quest. If you want a text based adventure with smut everywhere and images to enhance, Go play Corruption of champions for a similar price. It’s still in early access but it’ll knock your ‘socks’ off.

Kuro | Box of fish. because.
429 products in account
0
So do you play as a guy or can you customize your protag?
Protag customization is a big deal for immersion for myself, jusr curious cause you dont have anything about it on the page
4

crow
View screenshots
wait this isnt a rpg
I remember this having a rpg game mechanic. stats and levels etc
3

Recommended
3.1 hrs on record
The game is humorous and entertaining, but the initial preview screenshots for the game led me to believe there was going to be a lot more involved with it. The game is about 3 hours long if you pace yourself. Honestly the game is really only worth the buy when it is on sale.
Overall rating: 7/10
(needs more content!) 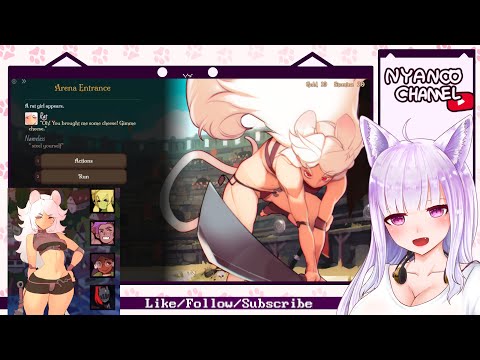