Timeless Adventure: A Journey to Begin

Time stands still in this fantasy puzzle adventure game. Venture as a ghostly wraith through an idle world, in search of answers for Death herself. The only help is your ability to possess living or once-living beings.
Visit the Store Page
Most popular community and official content for the past week.  (?)
Dev Update #8
Jun 21, 2021
Welcome to Dev Update #8. In case you missed the last Dev Update #7, you can find it here. Today I will talk a bit about my GMTK Game Jam entry, the swamp area, and the Vegetation shader.

GMTK Game Jam 2021
First I wanted to tell you, that I took part in this year's GMTK Game Jam with a small little game. You can play it here for free[itch.io] if you are interested. The GMTK Game Jam is a 48-hour game jam with great little games and awesome ideas. I encourage you to check out some of the games[itch.io], there are some really good ones in the mix. 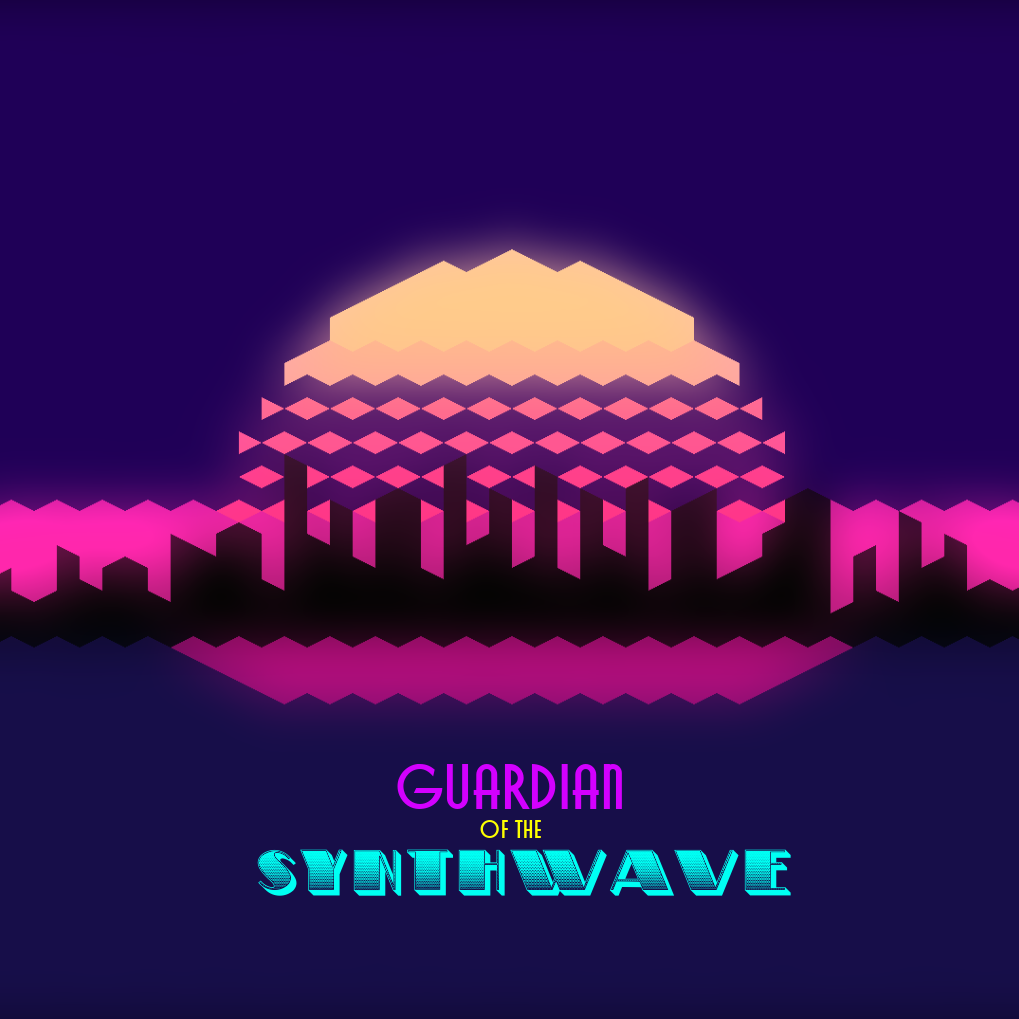 Guardian of the Synthwave is a small puzzler with a good old synthwave track. The game is nothing too fancy, and definitely not perfect, but I think it is good for some quick fun for a 48-hour project.

Swamp area
But back to Timeless Adventure. I reworked the Swamp area quite a bit. It should now feel more swamp-like with old ruins scattered in (remains from the age of the dwarfs). I also want to rework the sky, which obviously doesn't fit into this rainy swamp area yet. 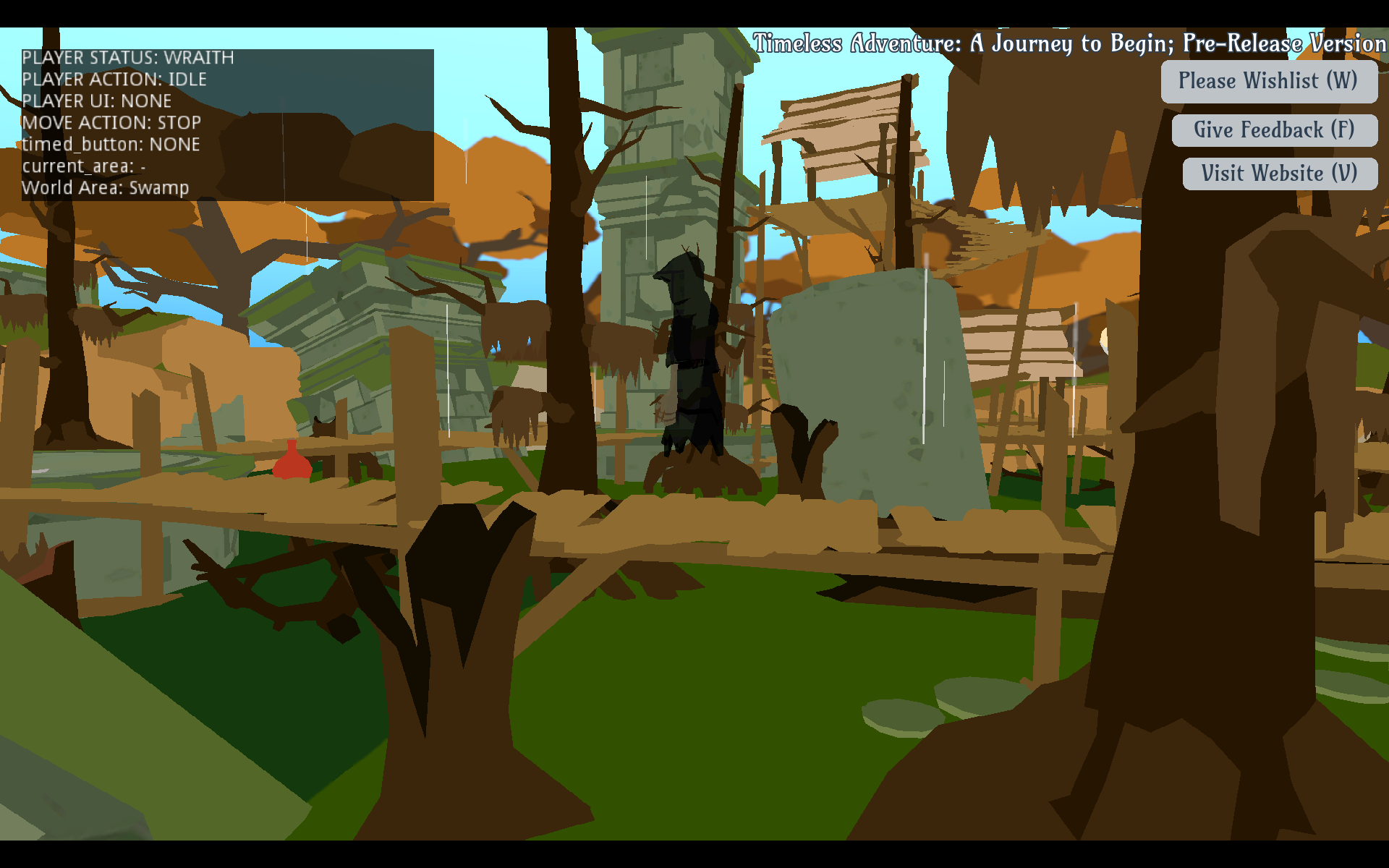 Vegetation Shader
I also worked some more on the vegetation shader, which is now more versatile and can be applied to different plants, so that they can all swing in the wind.

Other than that, there was just some under-the-hood stuff going on, where I can't really show much, since it was mostly code. But in case you wondered, the code is written in GDScript, the native Godot Engine script language, which I really like. It may not be the fastest language, but it is super convenient and not too hard to get the hang of.

I hope you liked this short Dev Update #8. Check out Dev Update #7 in case you missed it and please consider wishlisting the game.

If you want to learn more you can also follow me on various social media platforms (find all of them here on my website[freetimedev.net]). Thank you and see you next time.

Timeless Adventure: A Journey to Begin
1
0
Dev Update #7
May 15, 2021
Hi to Dev Update #7. If you missed the Dev Update #6, you can find it here. In this Dev Update I will talk a bit about the sound in the game, as well as the updated Wilderness area.

Godot Engine
Godot is the game engine of my choice. Now, I won't go into too many details here. I will just say, that the way one works with Godot is quite unique and I really like it. Plus it is completely open-source with an awesome community which is also a major advantage in my books. It is a really powerful tool, that gives you unmatched flexibility, even compared to the top dogs on the market, since 100% of the game engine itself is customizable. If you yourself are a dev and hear about Godot the first time, make sure that you check it out here[godotengine.org]! 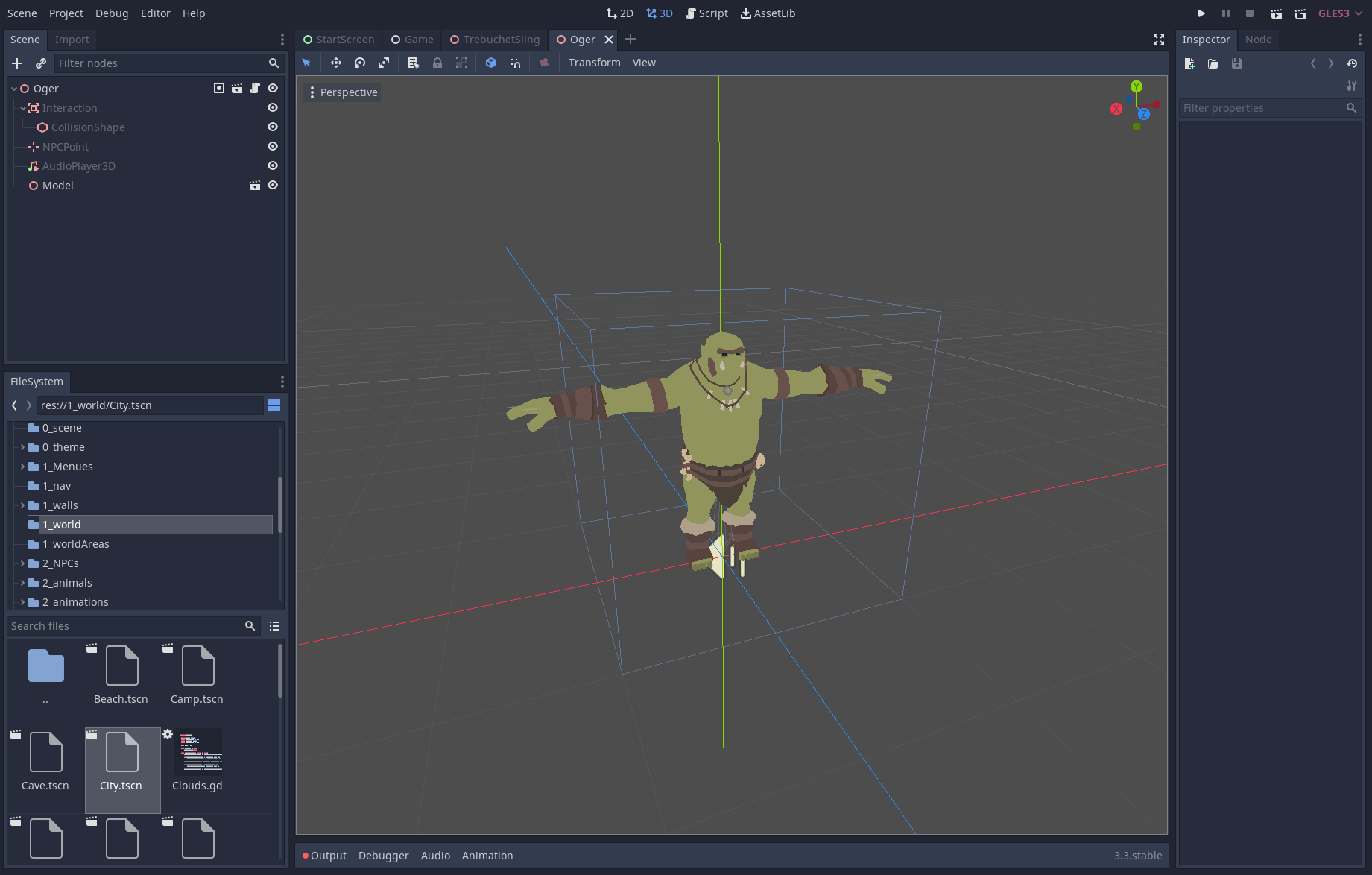 Sound Design plays a major role in every game, even more than most people think. Ever played a horror game without sound? Pff, suddenly it is for babies. Some epic boss battle without sound? Well, it is not really epic anymore, is it? No matter the game, the sound is very important. Still don't believe me? Well just think of a game you used to play a lot in the past. Now go and look at some screenshots. Does the nostalgia hit? Well maybe a little, but not so much. Probably looks kinda outdated at this point. Then go and play that title screen music or some other iconic track. What about now? Chances are, you would want to stop reading this Dev Update and start up the game right now. 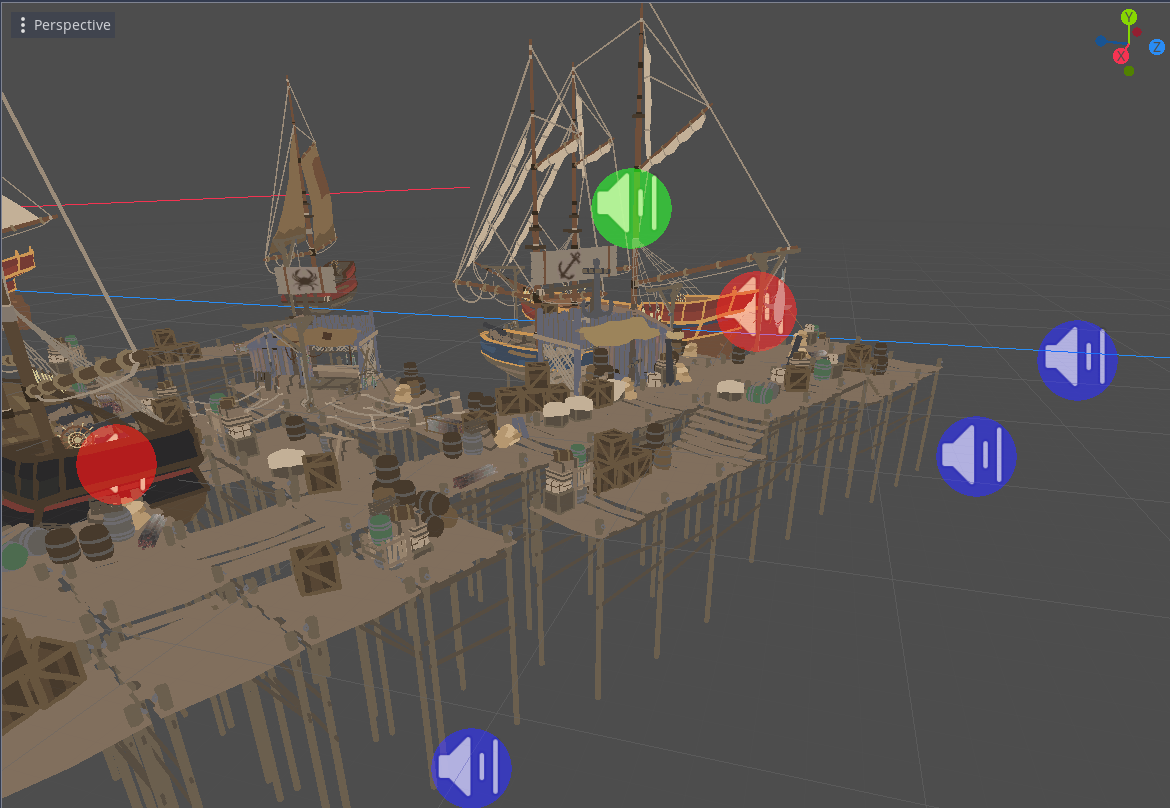 So, I don't consider myself to be an expert, but I understand how important sound is, and I give it extra attention. I have a few different sound sources at any given point in the game. For example here in the harbor: These colored sound sources are 3D sounds, and depending on how close you are, they will change in intensity. Green would be Seagulls doing their thing, red is the jarring of the ship and blue would be waves in this example. Then there is also the background music, where every area has its own (hopefully fitting) track. Additionally, there will be smaller sound effects, as you interact with the world, objects, and characters in the game.

You can check out this video, to see how it works together in this scene:

Now, it is not perfect nor final yet and I still plan to polish it up, but I think is not too shabby either.

Wilderness overhaul
I also made a general overhaul of the Wilderness area. It got a lot tenser in terms of trees and bushes and starts to look like a deep forest, which is what I am going for. 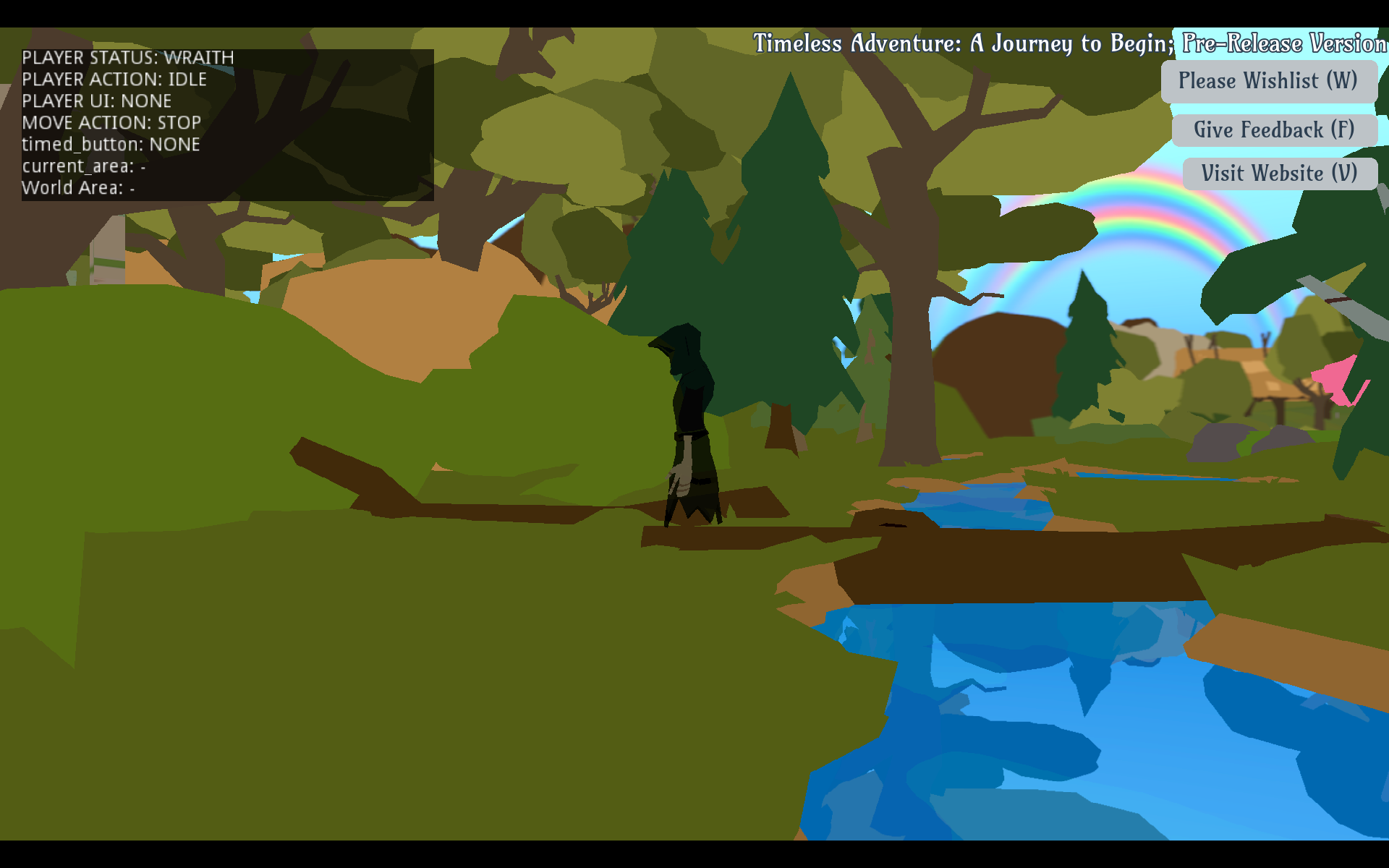 As I said in the last Dev Update, don't mind the rainbow, I don't plan to keep it in the game. 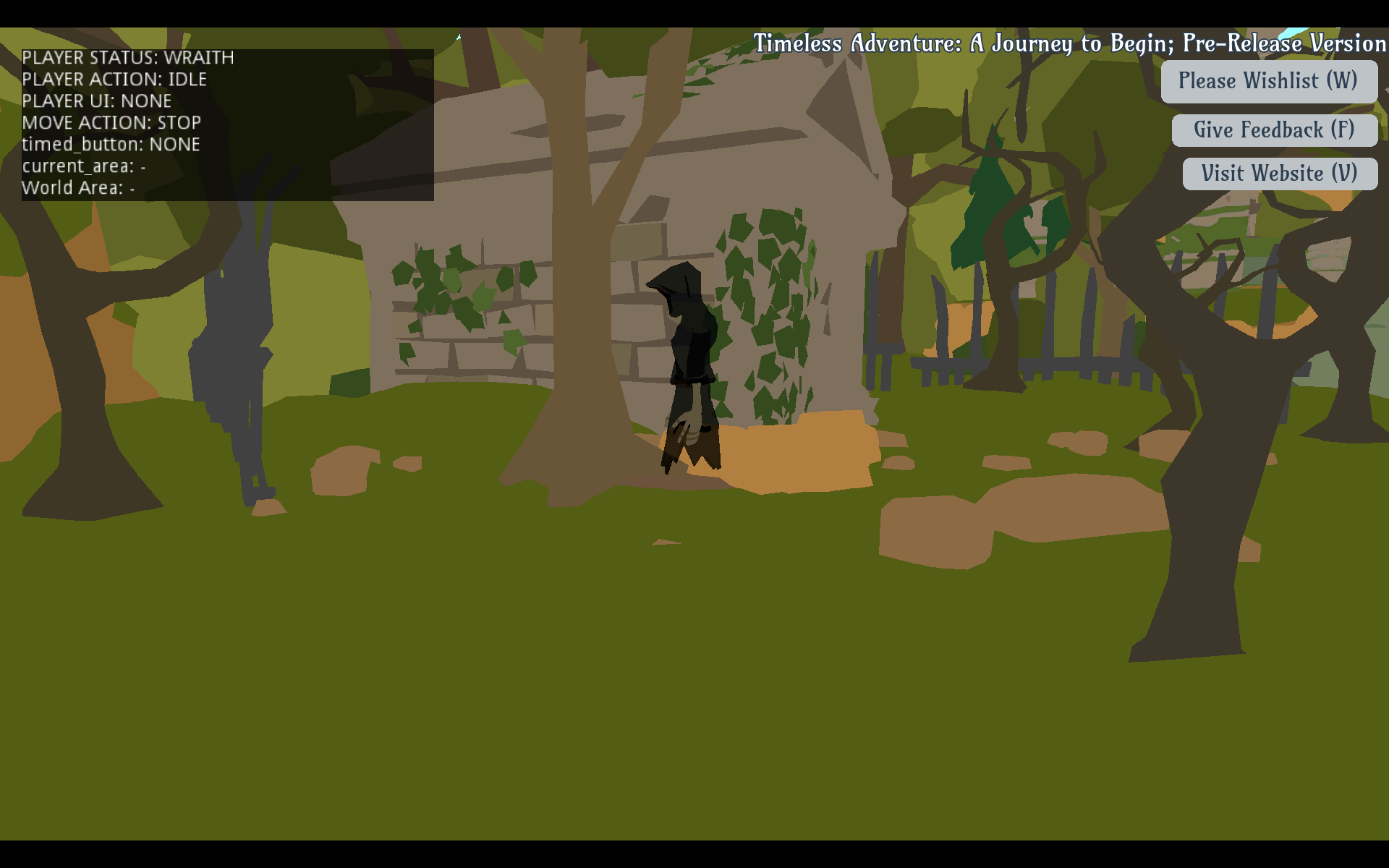 Most details are still missing, I will add them later down the road.

Well, hopefully, you liked Dev Update #7. Check out the last one in case you missed it and please consider wishlisting the game, it would help me out a lot.

If you want to hear more you can also follow me on various social media platforms (find all of them here on my website[freetimedev.net]).

Timeless Adventure: A Journey to Begin
1
0
Dev Update #6
Apr 17, 2021
Welcome to Dev Update #6. Not too long ago, I released a demo. I got some very good feedback, and so my focus was on implementing most of the points mentioned in the feedback. I am currently revamping all of the areas. Also, if you missed the Dev Update #5, you can find it here.
Demo
If you haven't already, feel free to check out the demo. I got some very useful suggestions (thanks to anyone, who submitted feedback) and already implemented some of them. At some point in the future, I plan to also update the demo with the changes of course.
Check out the demo trailer if you haven't and you can download the demo here:
Some of the Changes
Controls
One of the main criticism was the controls. So I reworked and improved them. You can now play the game with just the left hand on the keyboard. But, if you don't like that, you will be able to assign your own custom input keys for any given action in the future.
Gameplay
Some feedback pointed gameplay improvements out (like starting to walk after animation, when a button is pressed during animation, and such things), which I also implemented (most of them). Still a lot of room for improvement, but anyways.
Options
I also implemented more settings in the options menu. For example, you can now choose to use V-Sync, which also fixes the frame rate to the frame rate of your monitor.

I also added far distance blur to the game, which looks nice in my opinion, but if you don't like it, you will be able to turn it off or tweak the strength of it. And anti-aliasing is also added to the game
The audio options still need some tweaking, though. 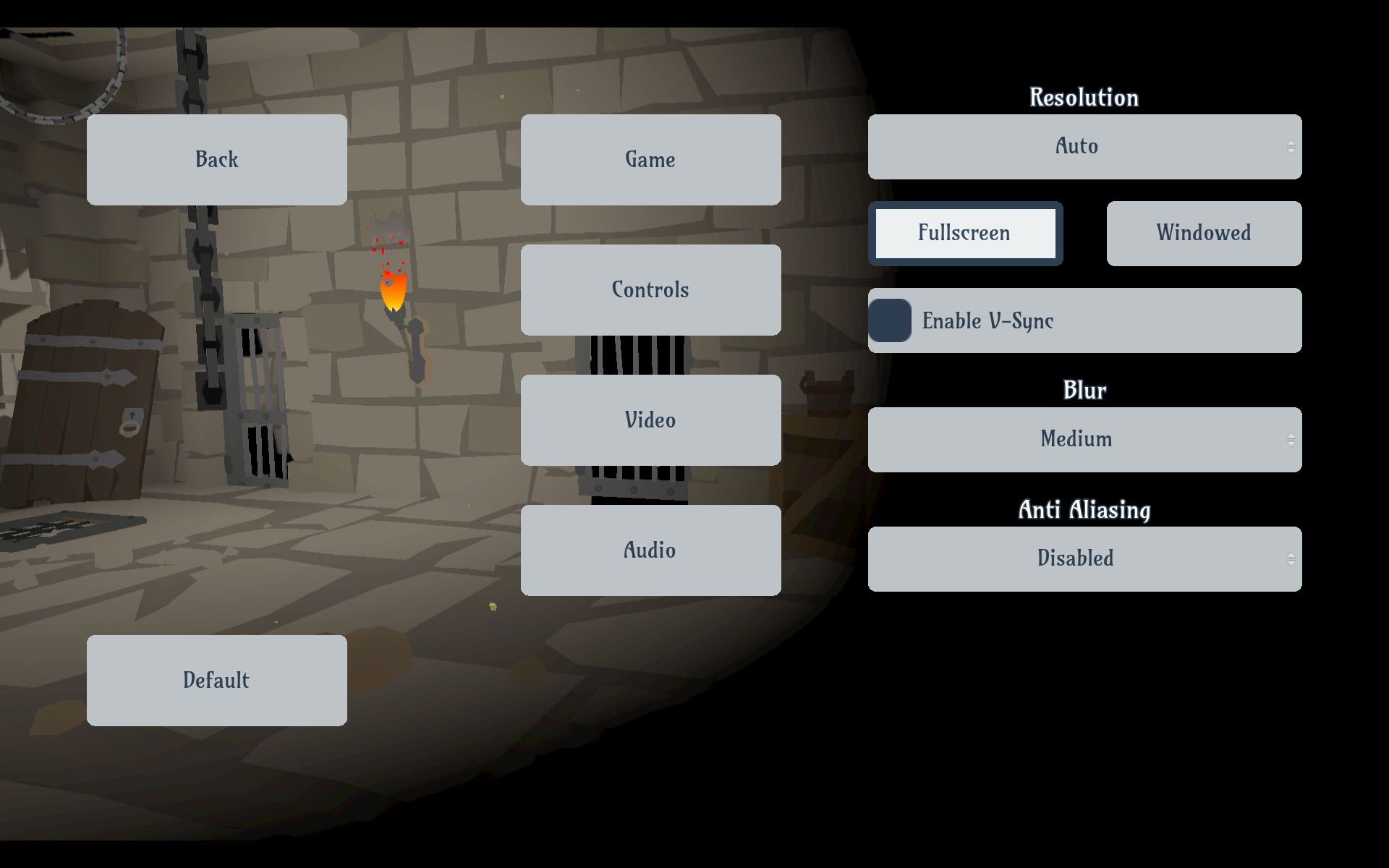 Sound
I at some point have to rework how the sound fades between the areas since it is a bit buggy at the moment. For now, I added some new tracks and effects to the game. Check out the Harbour area:

Intro
I made the first version of the intro cutscene. Even though I don't want to let too many cutscenes interfere with the gameplay, I plan to make a couple of cutscenes throughout the game to set and progress the story.
Area overhaul
Most of the areas still need some work, but they are getting there. I currently focus on improving the general look and feel of the different areas, and also how they differentiate themselves from each other. Have a look:
Harbor
Some minor changes to the harbor with a few of the characters added in. Also, the ships are now moving and jarring in the water. 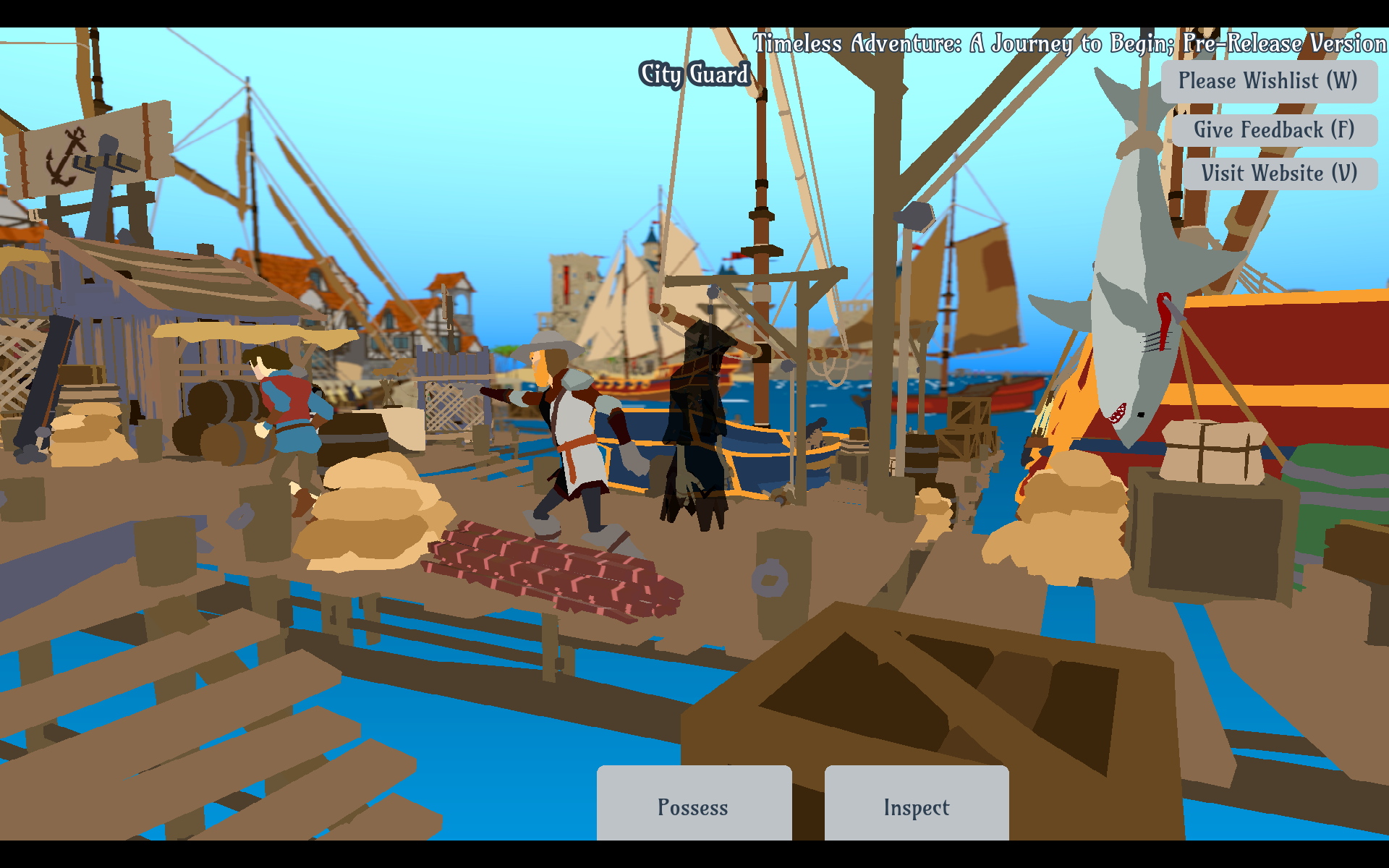 City
A lot of work went into the city, with a lot revamped and details added. I also added some of the characters. It is not finished, but I like where this is going. 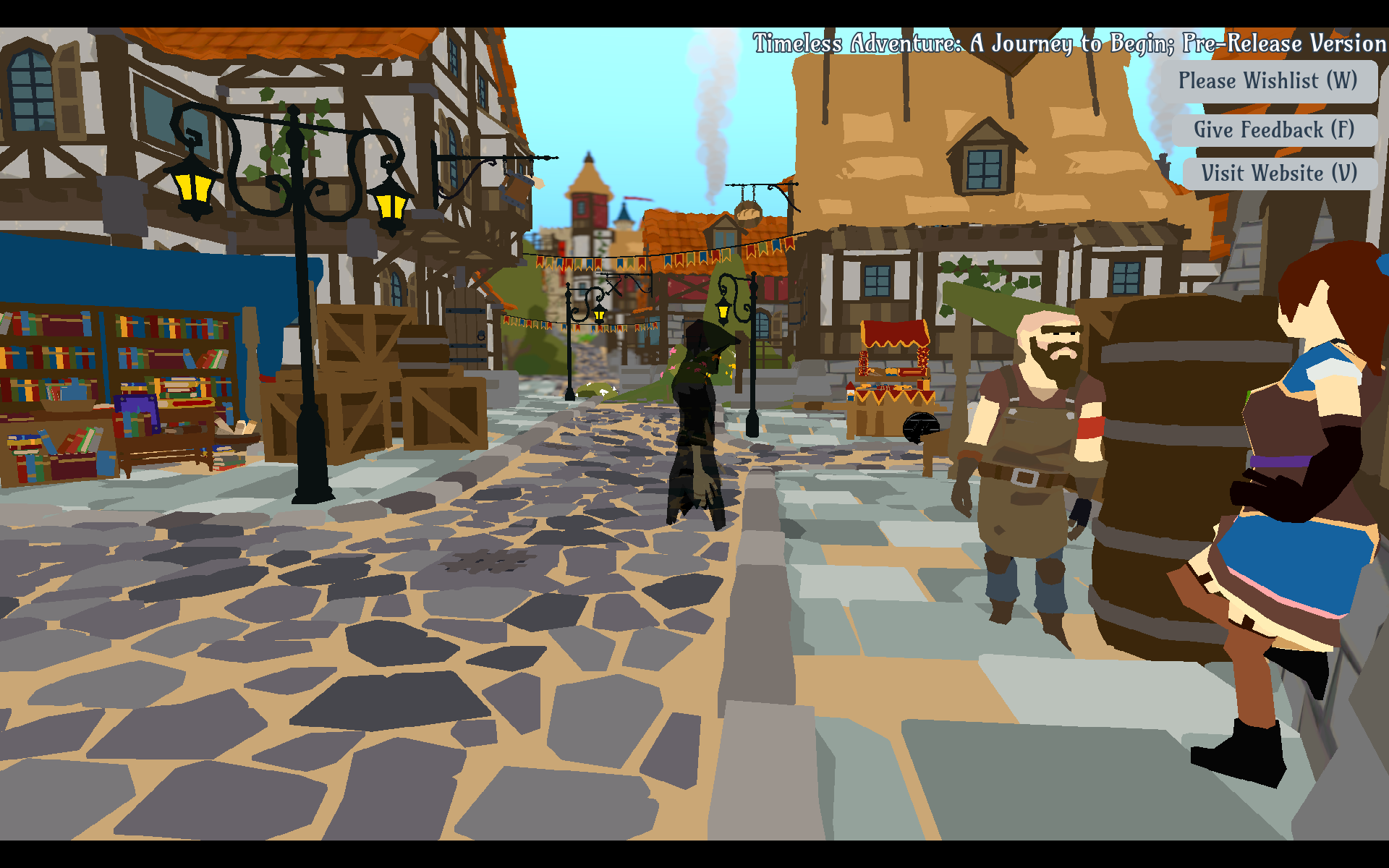 Slums
The slums / outer city got a completely new look. Still not finished though, characters and the details are missing as well as some rearrangements will be made in the future. I hope you prefer it over the old style though (you can find a screenshot of the old style here). 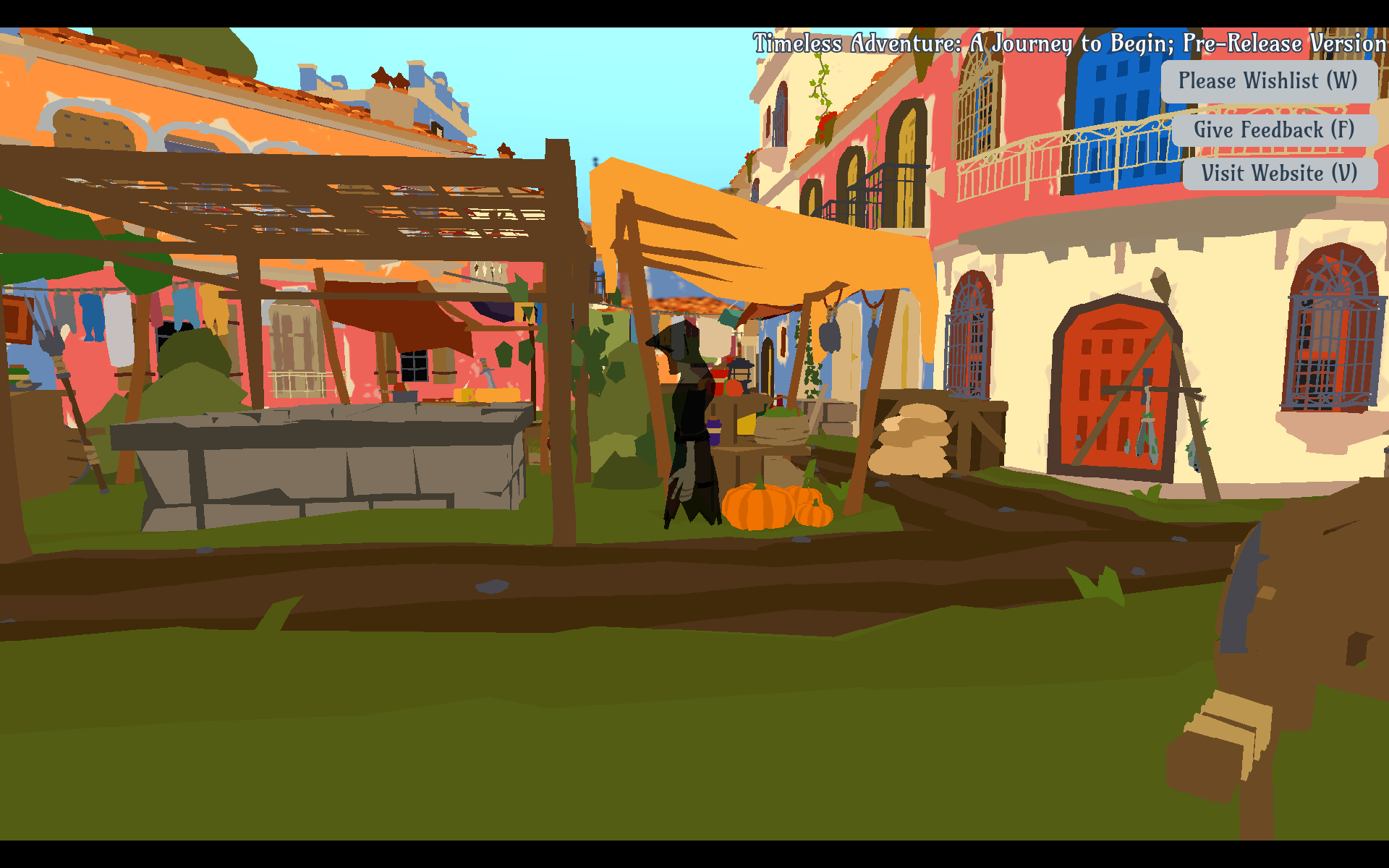 Farms
The farm area got minor tweaks, also I might remove the rainbow at some point since the kingdom is not such a happy place after all ;). 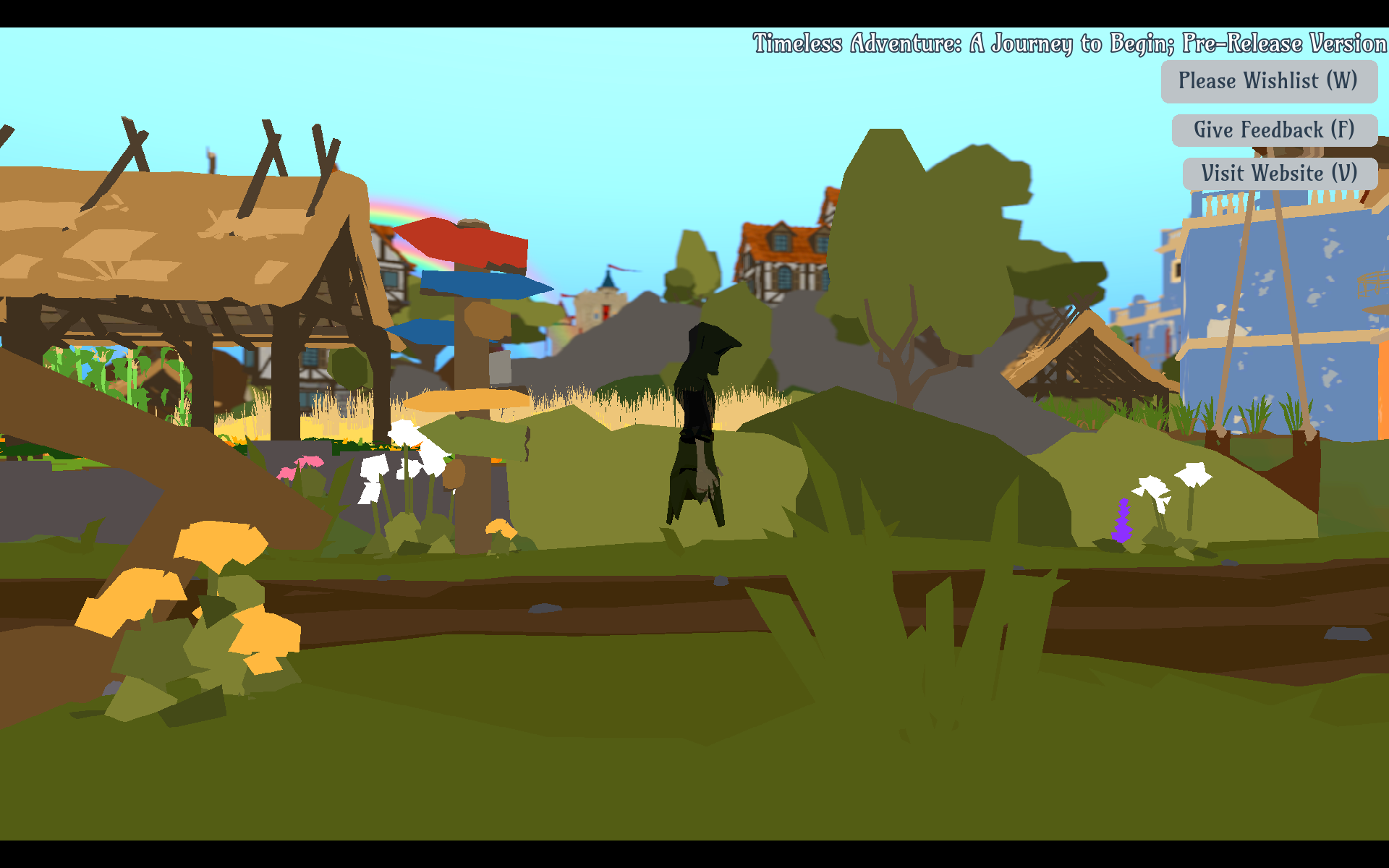 Posting time schedule
One thing I want to mention is that I plan to make updates and posts more regular. Not necessarily more frequent, since it takes a lot of time away from development to do this stuff, but at least more regularly. So, I want to make a Dev Update every month and post on social media once a week.

OK, I hope you liked Dev Update #6 and until next time. Check out Dev Update #5 if you missed it and please consider wishlisting the game, it would mean a lot to me.

You can follow me here or on Twitter, Instagram[www.instagram.com], or various other social media platforms (find all of them here on my website[freetimedev.net]).

Timeless Adventure: A Journey to Begin
1
2
Interview
Hi, I'm Matt from Team Ningen Gaming. I was wondering if you & your team would be interested in hopping on Zoom with us and showing off your game on our channel. We're still a small group but we're excited to start bringing on more developers and talking about the games that they made. Let me know if you/your team are interested and we can set a date. Thanks! https://www.youtube.com/channel/UC3B8dvkpVTuy9IkuUP_UPqQ Matthew Boyer CVO || Team Ningen Gaming teamningengaming@gmail.com Uniting gamers and small...
0

NIN NIN!
Apr 27, 2021 @ 9:52am
General Discussions
Can't wait to see more!
I like games like this and the art style is nice too, can't wait to see what happens. (like the stories in the little info blots about the people)
0