Corruption of Champions II is an erotic text-based adventure RPG in which you contend with an invasion of perverse demons into your home realm. Romance friends and enemies such as catgirl clerics and kitsune mages, transform your body, and try to defeat the spreading corruption - or surrender to it!
-20%
$9.99
$7.99
Visit the Store Page
Early Access Game
Get instant access and start playing; get involved with this game as it develops. Learn more.
Most popular community and official content for the past week.  (?)
New Patch: Darker Than Dark
Nov 15
Time for some new adventures, new foes, and some personal time with your dear companions!

Hex
Nov 24 @ 11:54am
General Discussions
Can't defeat a boss.
I'm trying to fight Queen Atheldred as a thief but most of my attacks don't work and my companions die before they can beat her. Is there any trick to this?
2 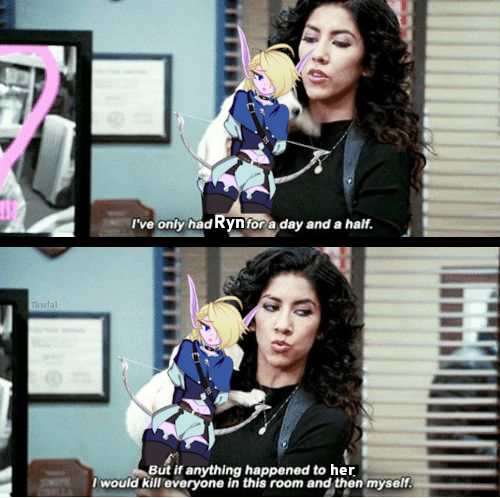 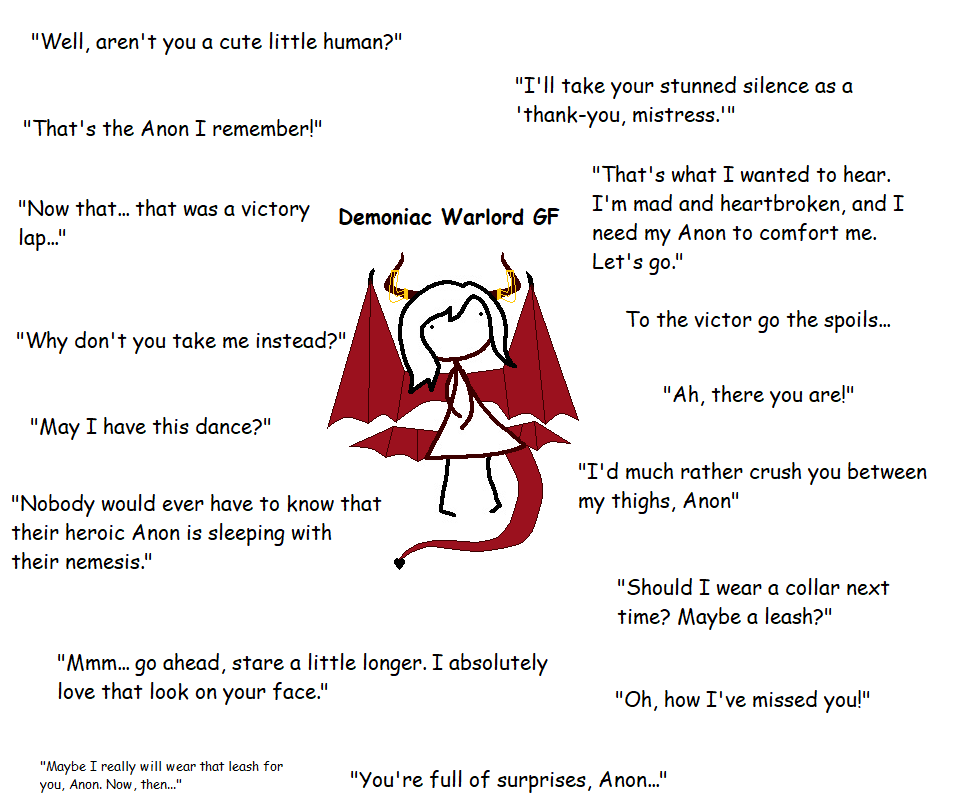 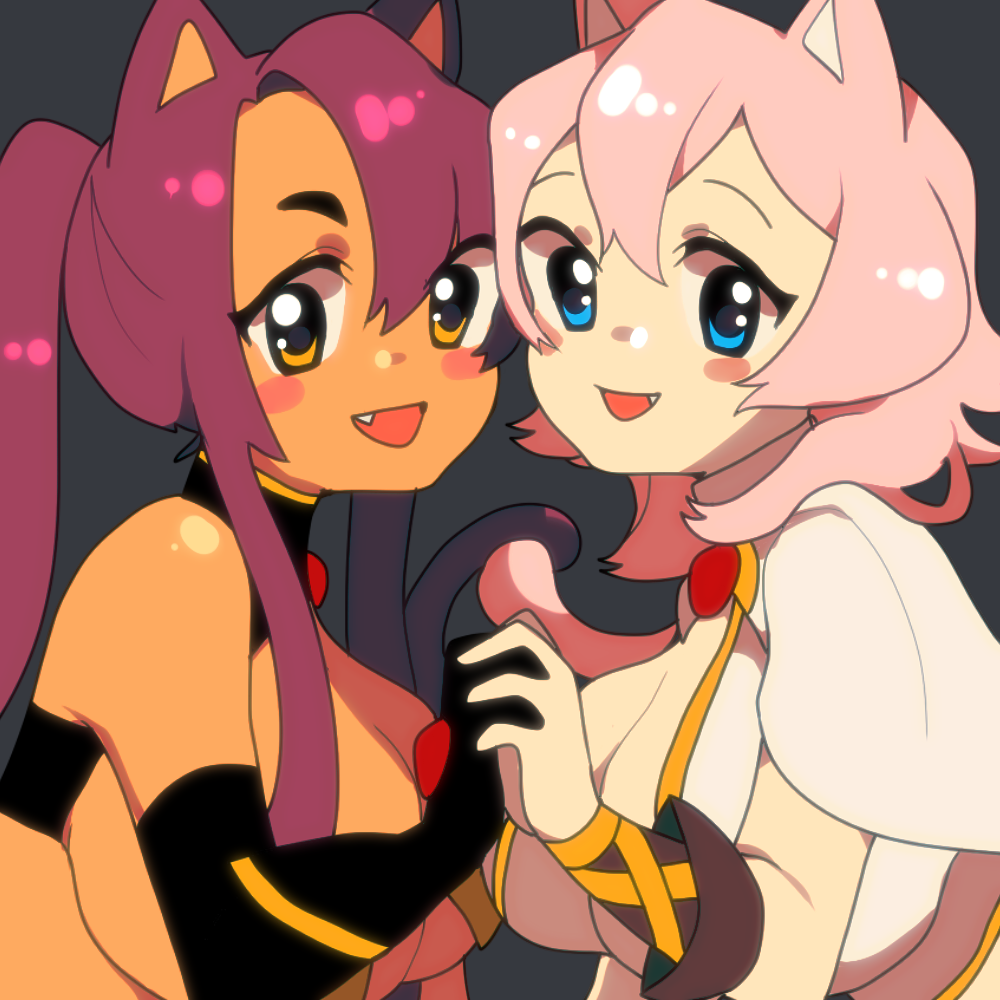 Barakoodra
View artwork
Queen bee resist?
What factors into being able to NOT screw her after winning? I've finished "the land of milky honey" once on a male character who completed all of the other major quests prior to that, and after defeating the Queen there were the usual corruption-raising options along with the option to refuse her. However this time on a different character (female, only finished centaur village, orc camp and wayford so far) after winning I only have a single option available, "ride ovipositor", that gives 2 Corruption, n...
7

Aedel91
Nov 23 @ 4:26am
General Discussions
About the Blue Bar
Hey everyone, can someone explain to me what the blue bar next to my health means ? It seems to be some sort of arousal right ? I keep trying to fight the Hornets but their Honey just does way too much damage to my blue bar. Can i protect myself somehow ? I basically have the best armor and weapon I can get at the stage in the game, which doesn´t help if their arousal attacks or whatever they are just go right through. I usually flee from combat as soon as i see them because they´re way too strong even ...
6 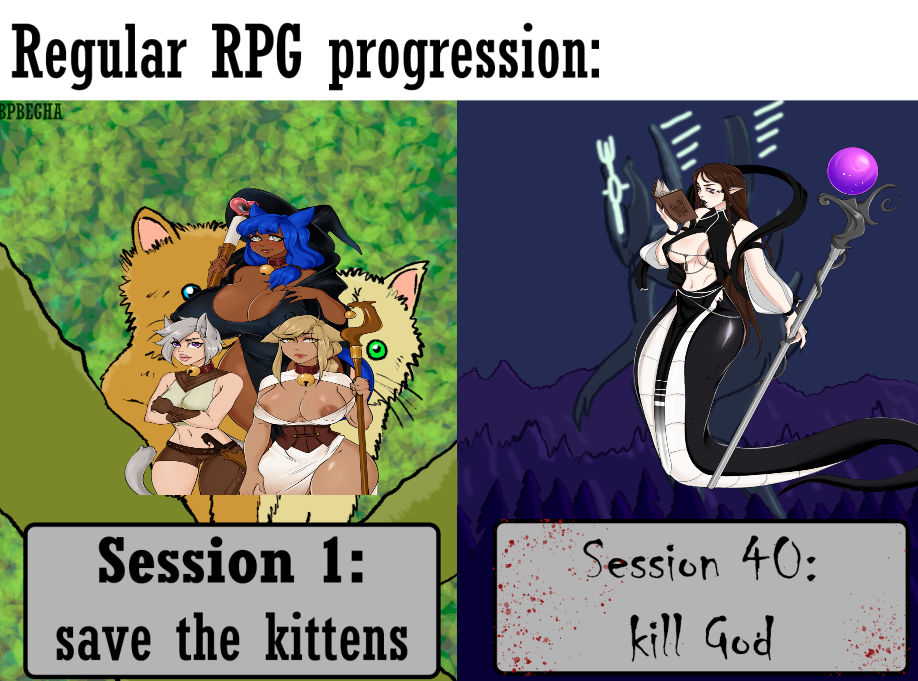 Guide to Missable Powers
A short guide to stealable powers that you may lose access to over the course of the game.

Nareva "Talk Battle Solution"
This is a quick step by step to beat the godess of knowledge, require for the achievement "Duel of Wits"

How to FOX
You can fox! 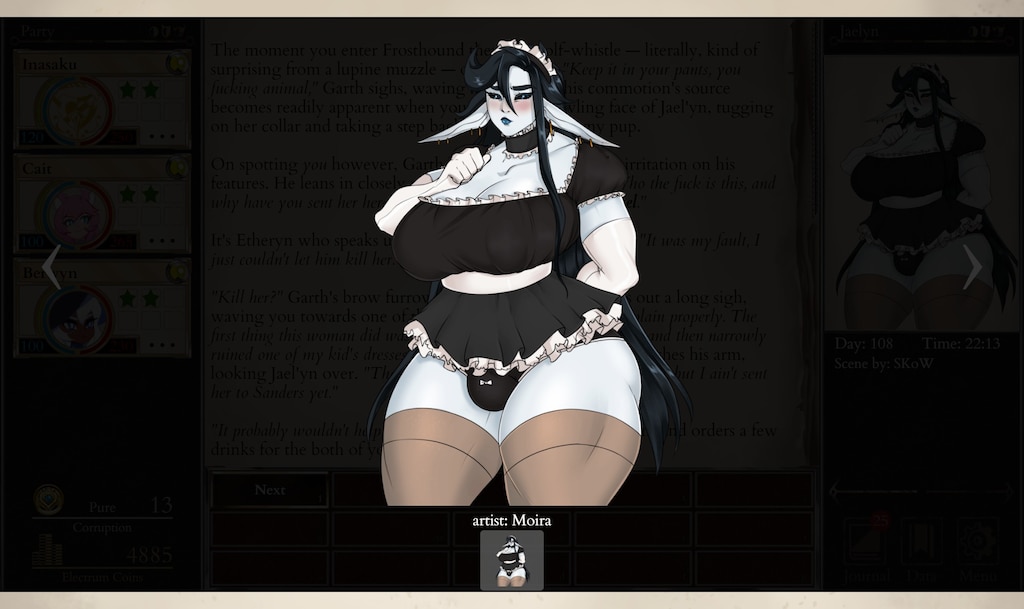 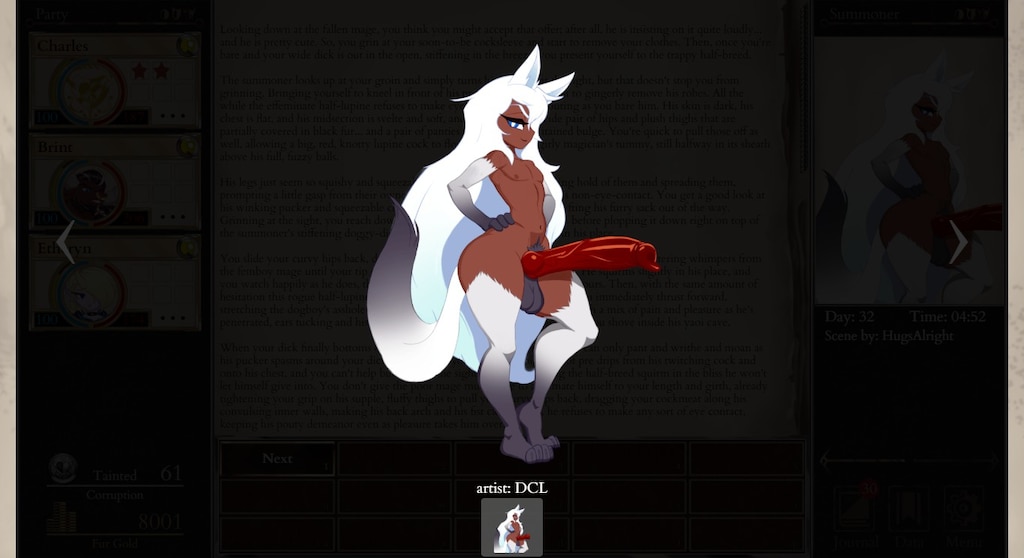 0
1
told ya, berwyn is best femboy 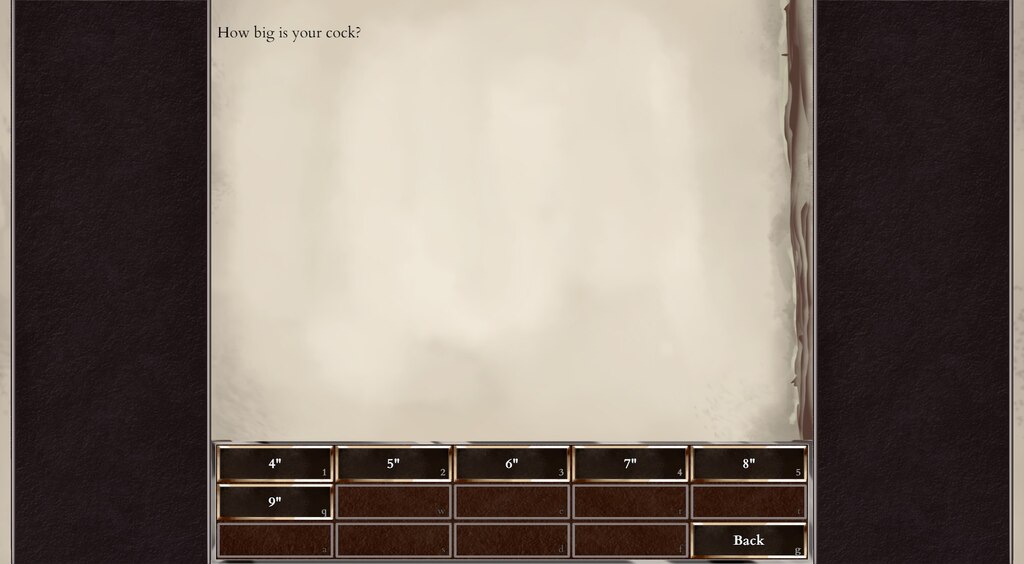 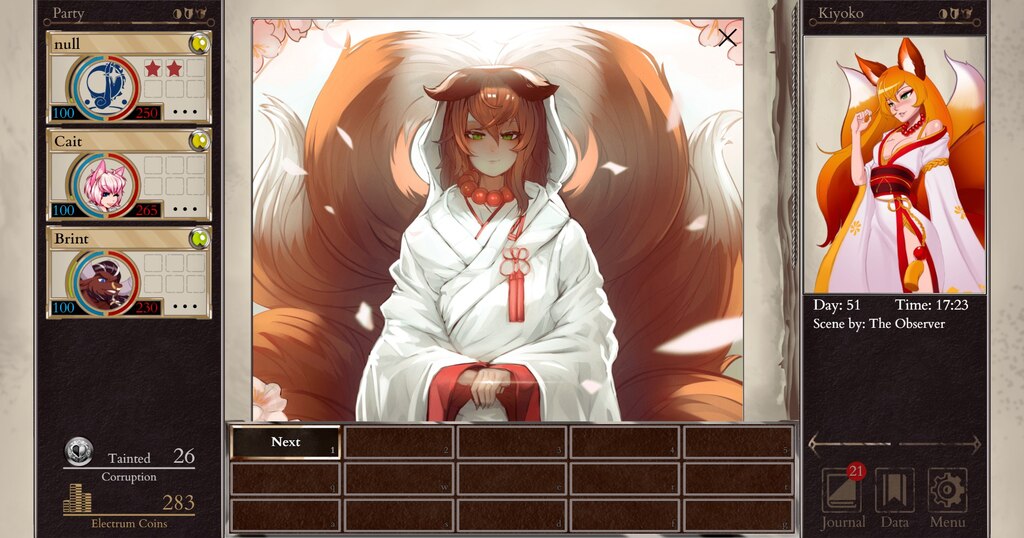 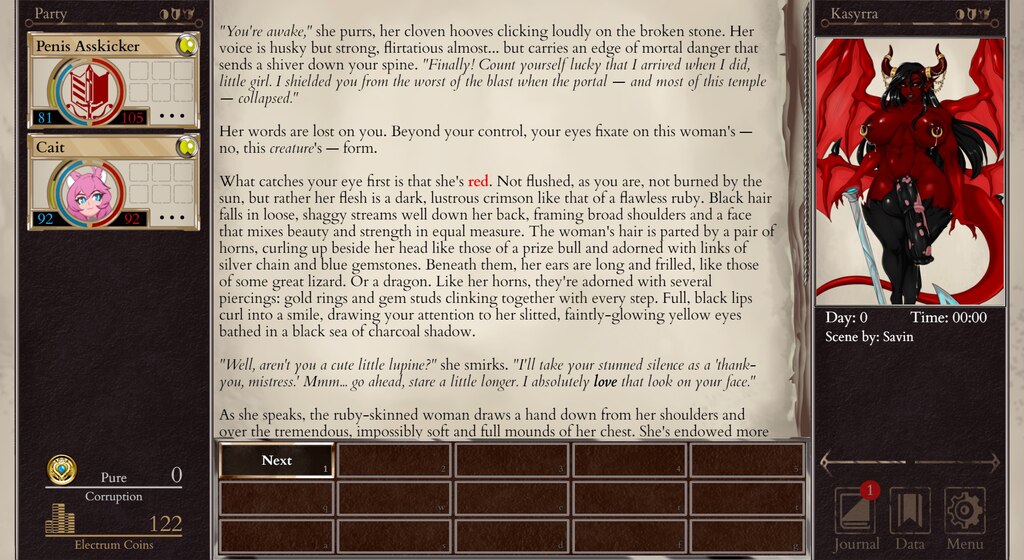 Recommended
7.8 hrs on record
Early Access Review
Its interesting classic text based RPG style with interesting characters and sexual encounters, though too much FUTA. I find it fun, though I think there are far too many encounters for my liking with females wielding penis'. I would be happy if the artist and writer toned that back some. Some would be ok, but almost every other encounter seems to have some female with a penis trying to get my character to take on her penis. I seem to skip those where I can and hunt for just male on female encounters. I'd still recommend it overall, just hope the writer takes this to heart, LESS FUTA more Male/Female interactions.

ironman2ooo
278 products in account
0
Panty achievement
How do I get the panty raid achievement?

Not Recommended
15.0 hrs on record
Early Access Review
As of current I can not say this is a good game or that I would recommend. However, it is something I would buy currently or in the future.

The cons
1. Lack of any music, yes this is a text based game, however, having no music is a huge minus.
2. Lack of tool tips on mini map and several scene selections in the game, even early on.
3. Awful balancing of characters and monsters for combat.
4. Lack of places to buy actual equipment/gear.
5. Beginning of game after intro, poorly explained and executed.
6. Dear god, shorten the descriptive text in combat if I've seen five times before. Same with other scenes in the game that are constant redos. AKA skip cutscene.
7. Give me a vague idea on the map, if I've found all the pathways or not for a spot I am in.
8. Lack of picture for the main character.
9. No ability to donate further to the developers once bought the game while using steam only. Yes, I'd like to contribute more to the project.
10. Lack of storage space in all regards.
In short, in terms of an actual game, it is bloody awful.

The Pros
1. Good writing, but sometimes needs to hurry up to the point. Yes I understand how big my **** is, I don't need to be reminded every few paragraphs. In this aspect the writing is sloppy with unneeded or poorly described words.
2. The characters are entertaining.
3. Gets to the point of the genre, rather then pushing it to the back end.
4. Good comedy at times.
5. What pictures are available are nice.
In short, has promise.

In conclusion, game as of current is a 3.5/10, will frustrate you greatly, buy right now only if you are really and I mean really into hard core stuff. I think this game has the ability to be a 7/10 only after much work, wait to buy.

Descri
706 products in account
2
New Patch: Specter of the Wyld
Oct 22
Hope you guys can forgive us for the late patch, but we've got a brand new season-themed (but available year-round) dungeon for you!

Recommended
0.9 hrs on record
Product received for free
Early Access Review
too text focused. i'd prefer there to be artwork of the areas i am in, unfortunately it seems like the only artwork is smut, i'd like for them to add at least some graphical worlds, no matter how basic, since the incredible amount of text makes this game really difficult to play for me.