Release the Pressure with PowerWash Simulator! Wash away your worries with the soothing sounds of high-pressure water. Fire up your power washer and blast away every speck of dirt and grime you can find, all with the simple satisfaction of power-washing to a sparkling finish.
$19.99
Visit the Store Page
Early Access Game
Get instant access and start playing; get involved with this game as it develops. Learn more.
Most popular community and official content for the past week.  (?)
Washroom - Dev Log #32
Oct 22
Hey everyone!

Update 0.6 splash landed last week and with it we made history - the ability to powerwash a toilet! Join us in this week's dev log, to flush out the rest of the new Washroom job and how it was made!

We're not ready to tease the next update yet but keep an eye on our socials and here for when those spoilers eventually do flow! 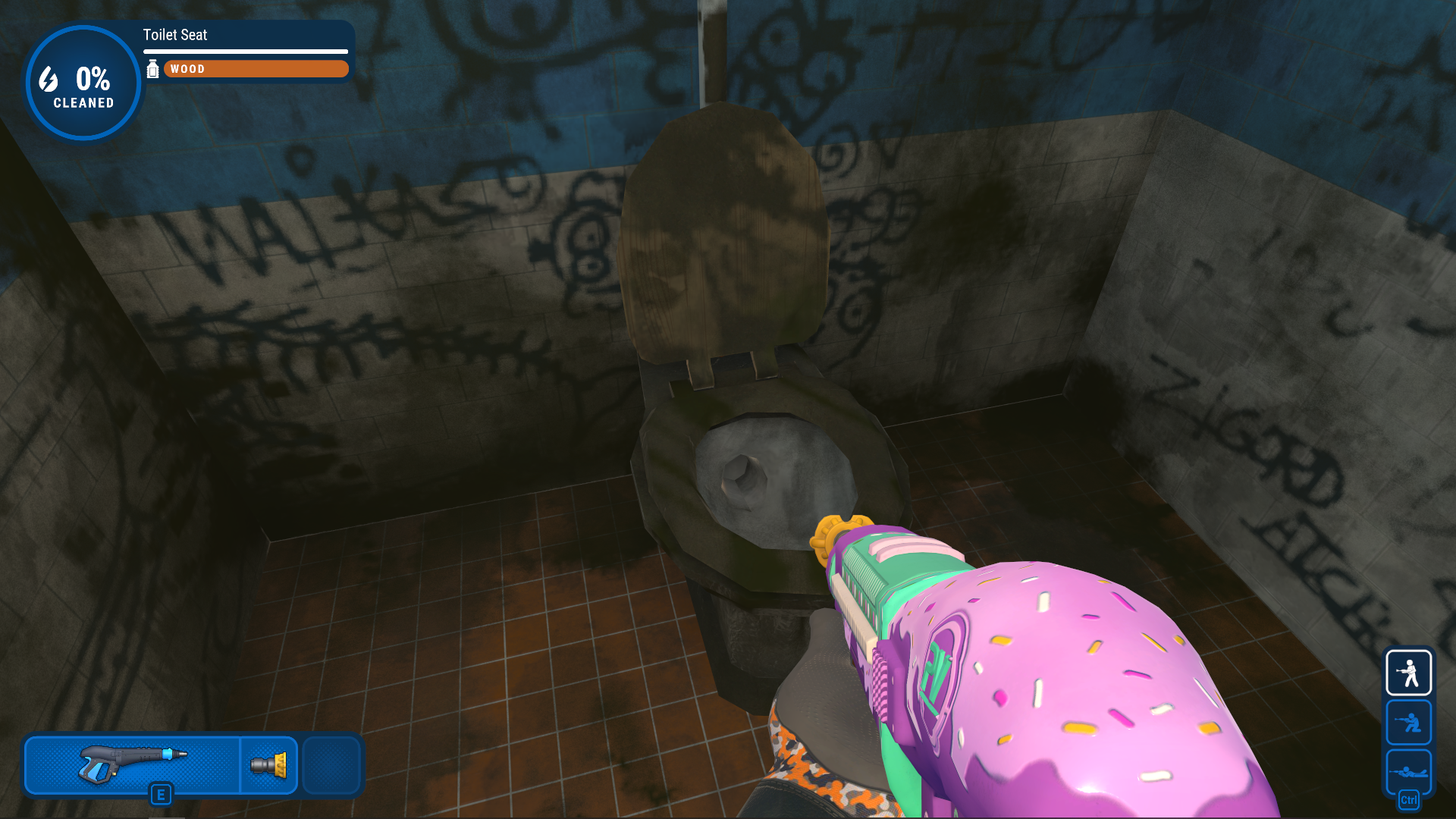 We'd also quickly like to thank everyone for their amazing steam reviews and that we're truly honored we've hit 99% positive on the recent reviews. It has blown us all away!

Today we have some insights on the new job for its design and art directly from the developers. So far, the feedback has majoritively been that people have loved the level and hopefully it has hit the satisfaction level we were aiming for!

Torger worked on the art direction for the level and the dirt being applied to it. Here are some of their thoughts on the art process:

Originally posted by Torger:
The underground Washroom was an interesting job as our first interior. We wanted to retain the sense of wash satisfaction, but knew we would have less direct sunlight to work with to create a bright and inviting space. It was important the space appeared well-lit and appealing despite being located underground. We chose a primarily blue, white, and cream color palette that would feel clean and hygienic, with some added orange accents for a visually appealing contrast. We introduced a lot of bounced lighting from the ceiling windows to fill the space with light. We had to strike a balance between brightness that would contrast with the dirt, while still maintaining the artistic impact of the lighting. While value contrast is important to our game, we felt that the visual appeal of the cleaned space is equally important in creating pleasing contrast between dirty and clean.

For the dirt we used black, along with dirty yellows and greens, to contrast the clean space in hue as well as value. The dirt application for this scene was another area where we had to find a careful balance. We had to create a properly dirty space that would bring contrast and wash satisfaction to the scene, without making it feel too gross for players. This is the reason the toilet bowls themselves are relatively clean.

Overall we were very pleased with the art in this level, and we're glad players seem to be enjoying it too.

It was a challenge for us to tread the line between making sure the level was dirty enough to give the contrast for satisfying cleaning but also not to be too disgusting. For, well, obvious reasons. We don't want to dump too much into that. 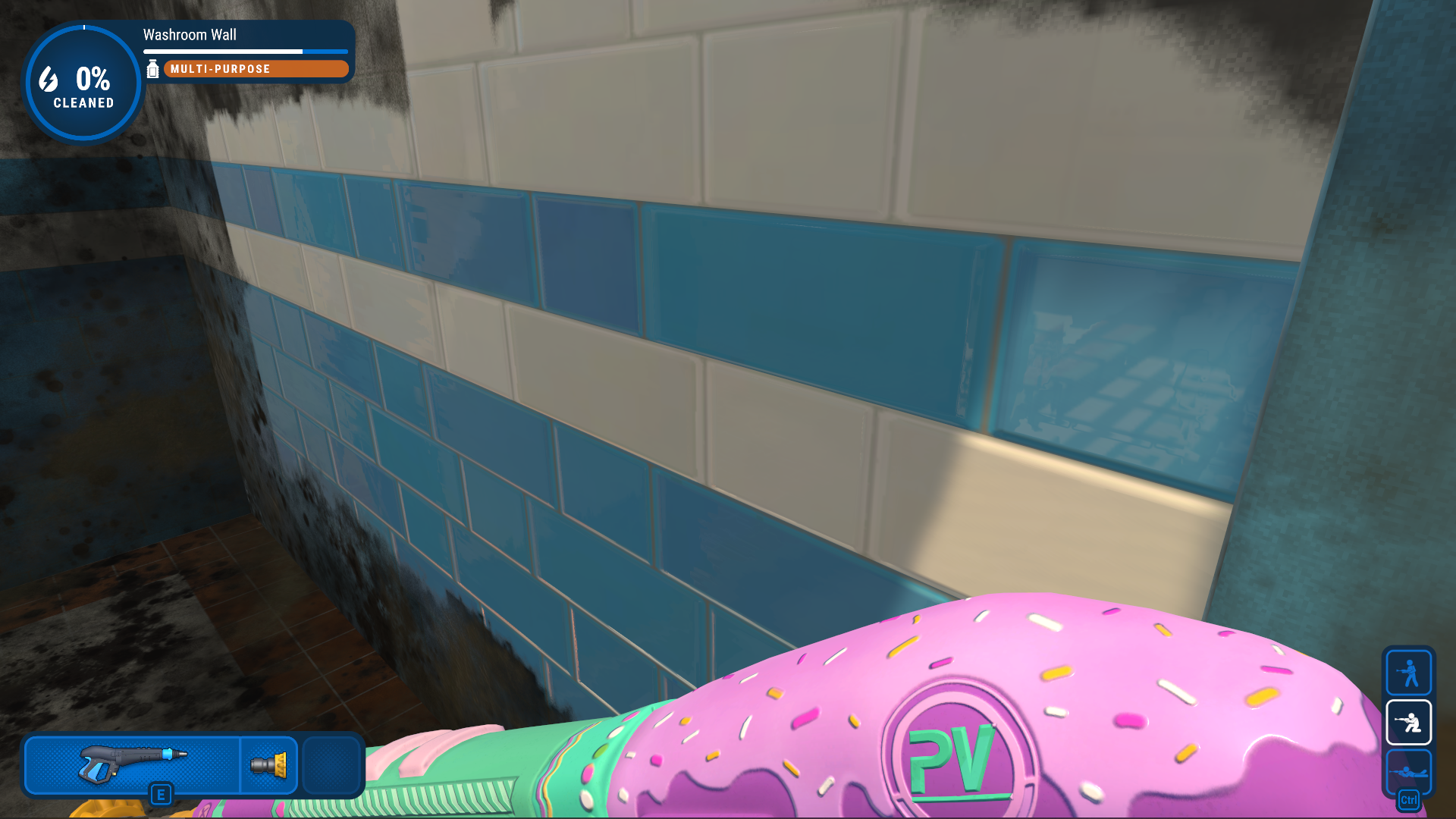 Moving on! Nick worked on the design side of the level and had this to say:

Originally posted by Nick:
The Washroom is our first full interior job and is undoubtedly one of the dirtiest places in the game thus far. We knew it had a certain 'shock value' to it which we tried to amplify by starting players in a relatively clean tunnel so when they walk around the corner they can be surprised by the true extent and depth of the dirt here.

Our main objective with any dirt design is to create as much of a contrast as possible between the dirt on top and what's underneath. We selected dark dirt types like mold, grime, and mud to compliment the white and blue tiles, walls, and fixtures of the Washroom. We also worked with the art team to ensure that the surfaces throughout this space were as bright and reflective as realistically possible for maximum washing satisfaction when they are revealed.

We hope players enjoy powering through this one to discover the beautiful, pristine Washroom hidden beneath years of muck and abandonment. 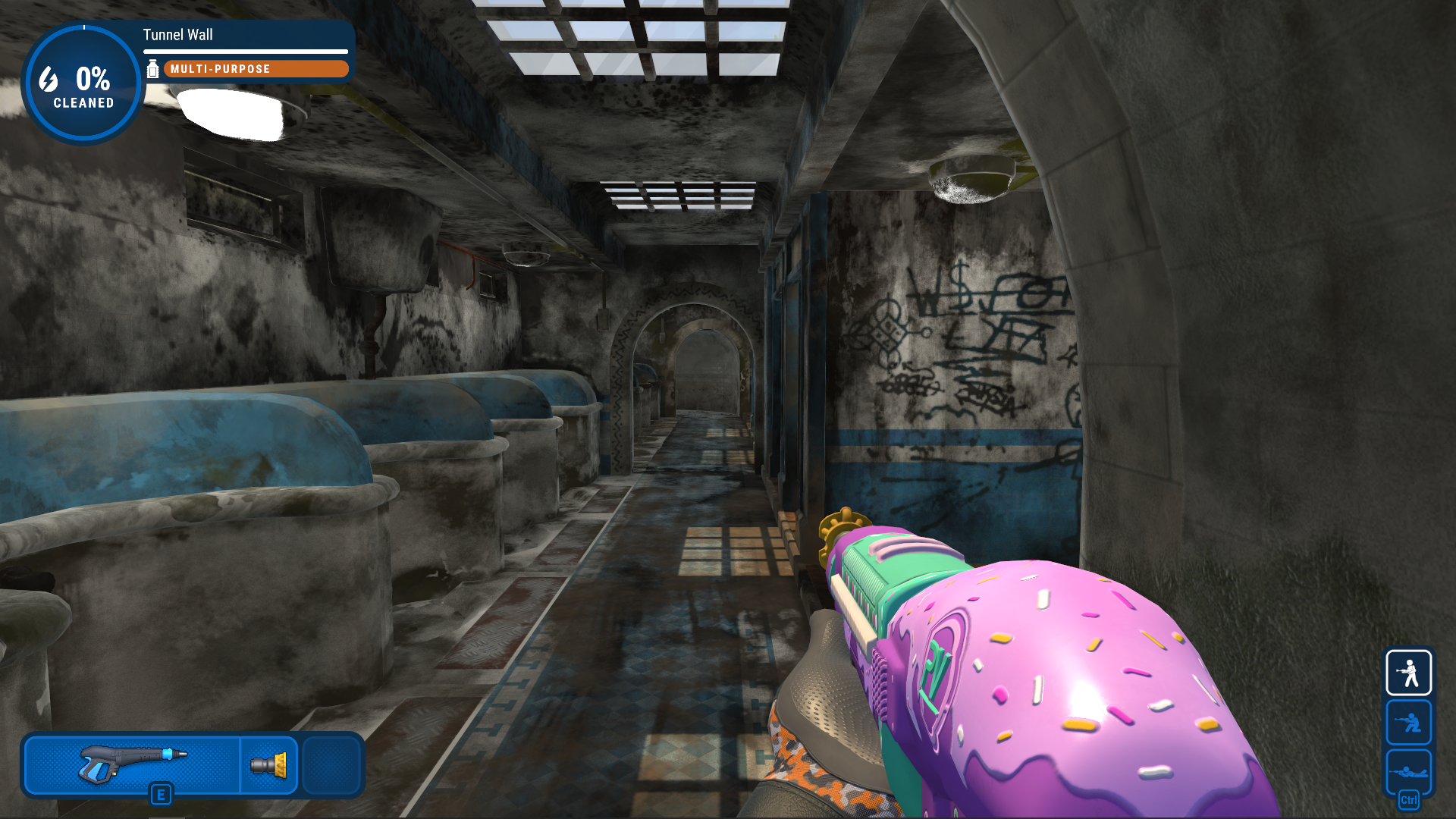 Let us know all of your thoughts on the new level in the comments section below!

Until Next Time...
Lots is going on behind the scenes and we can't wait to share what is next! Though, the time for that is not today. We look forward to seeing you all again in next week's dev log! No spoilers.

If you want to vote on new game ideas, talk to the community, find some tough dirt - then join our Discord community: https://discord.gg/powerwashsimulator

Welcome to content patch 0.6 which adds more things to wash, including the first indoor non-vehicle wash. Plus, new challenges, skins, and more! 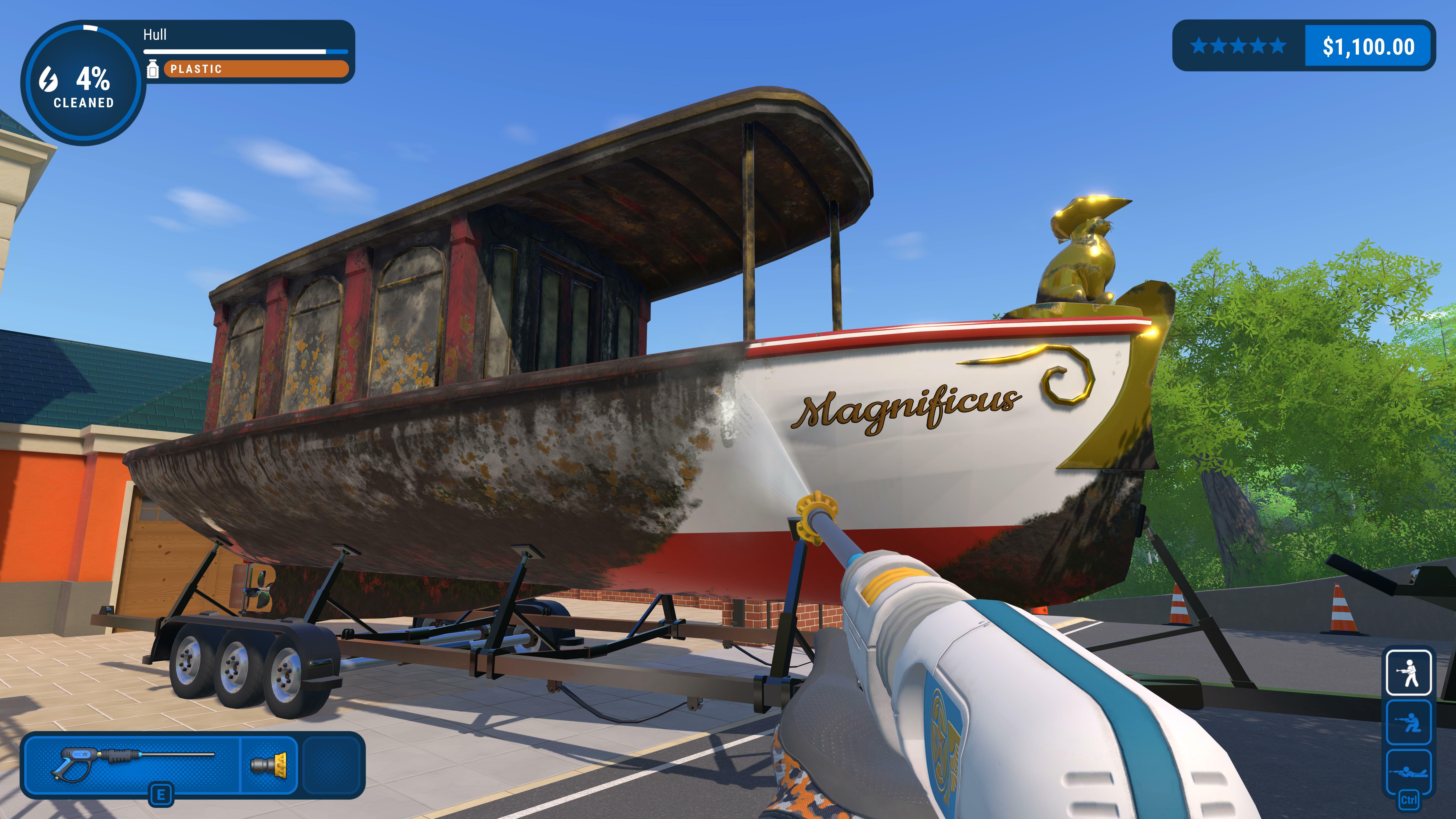 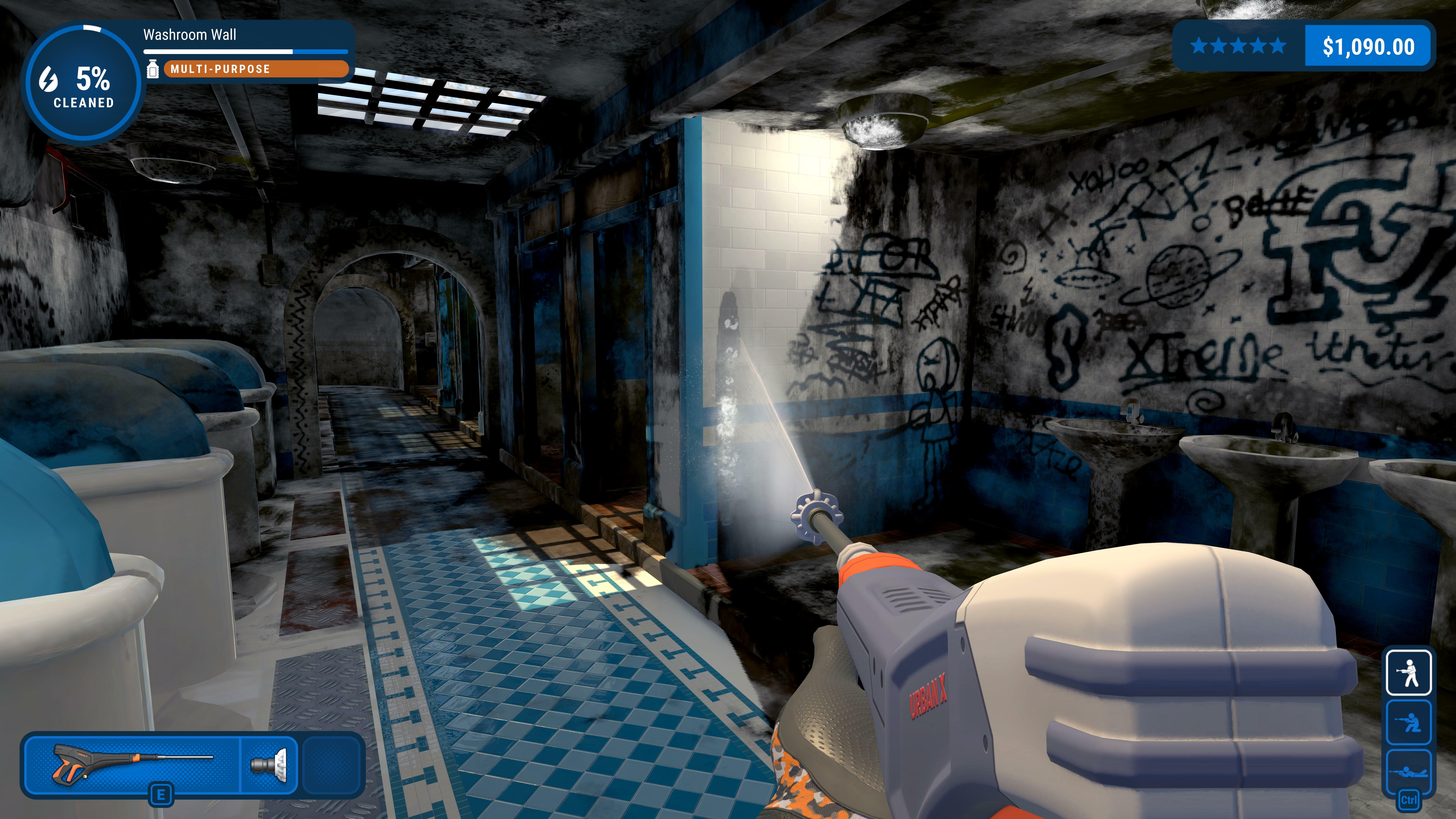 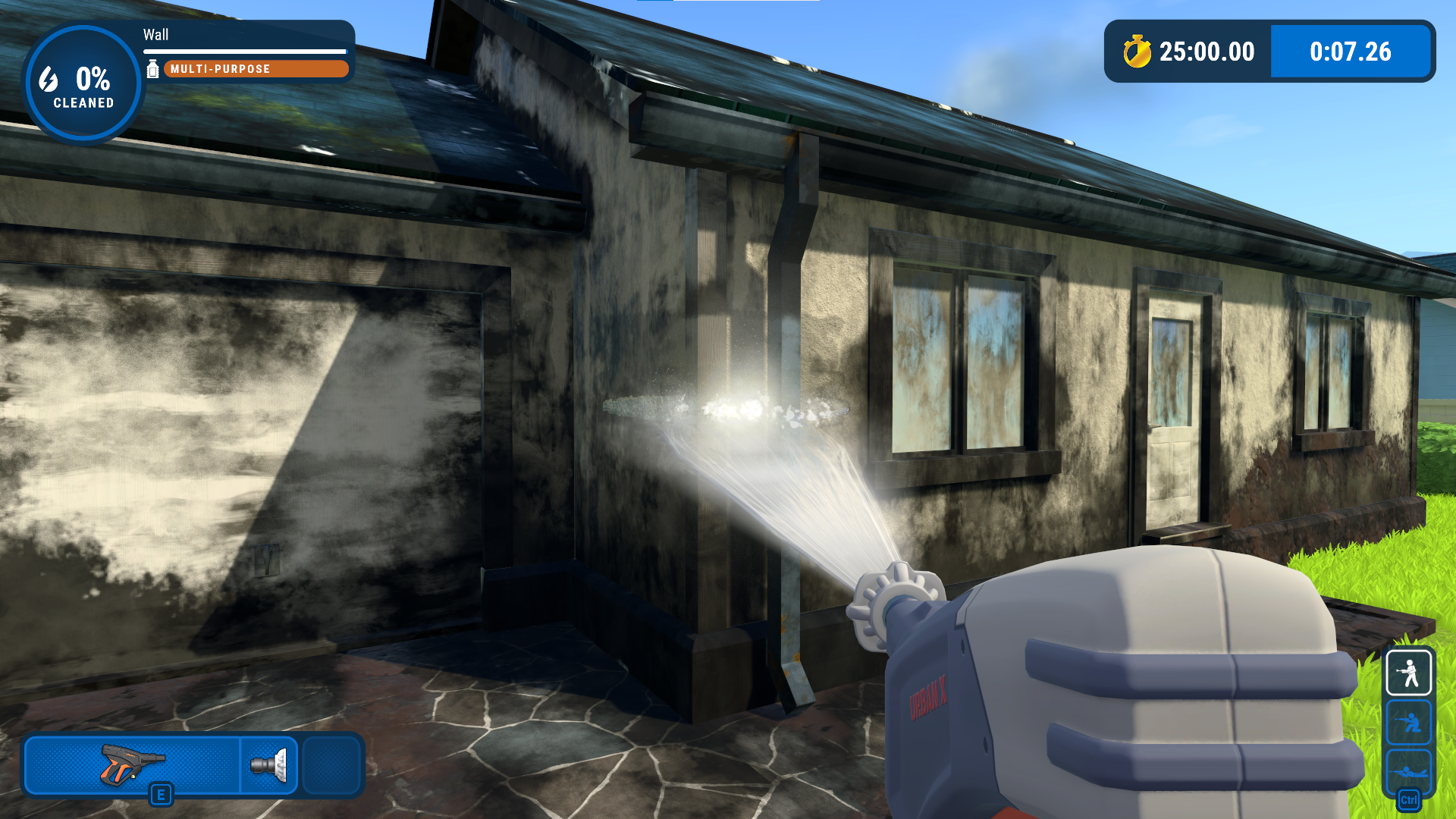 New Skins for the Prime Vista 1500 & Urban X U2 powerwashers 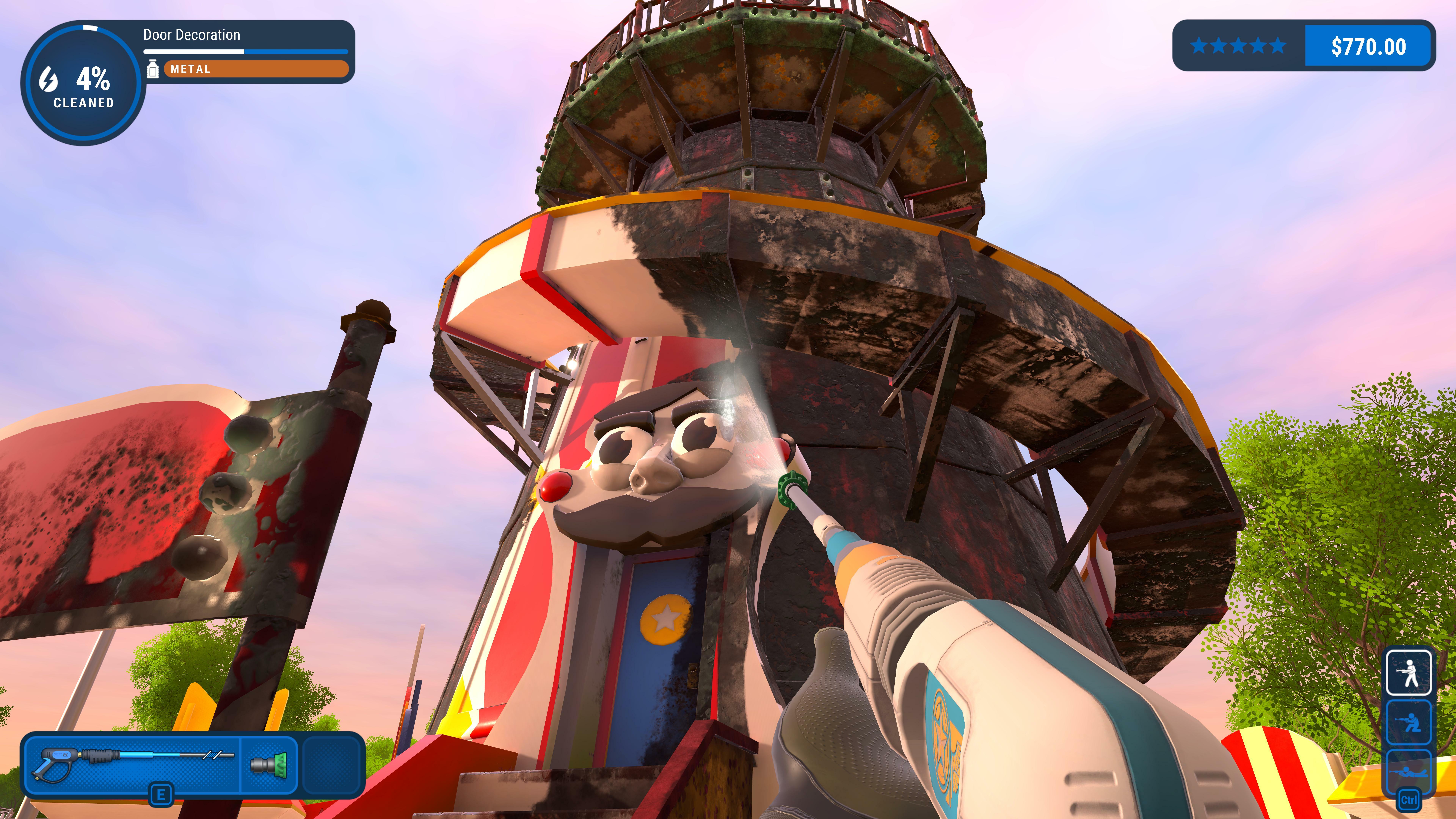 Thank you all for playing and for your feedback so far. We hope you’ll all enjoy the new content and we can’t wait to start teasing what’s in store for the next update!

Until Next Time...
That's all for this update, please let us know all of your thoughts on the new content, here, on our Discord, or on our socials! Also, this counts as our weekly dev log, we'll be back with another instalment next week!

Join us on Discord: https://discord.gg/powerwashsimulator

PowerWash Simulator
555
72
99% on Forest Cottage
For like 2 weeks I'm stuck on 99% on Forest Cottage. Update supposed to solve that but apparently not in my case. I walked around the house several times already and tried to highlight dirt but everything's appear to be clean. To do list showing I have walls to do, but despite cleaning every wall with water(few times) and water +cleaner, this 99% on wall still remains. Do I really have to start from the scratch now?...
1 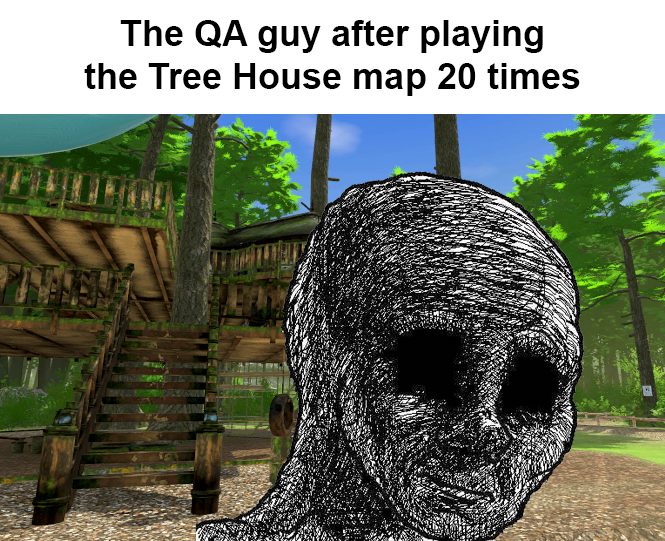 We're aiming to release Update 0.6 very soon! Keep your eyes on the Steam skies for when it makes its fly-by!

A mysterious customer has called upon your services once again. This time for an extremely dirty jet plane! 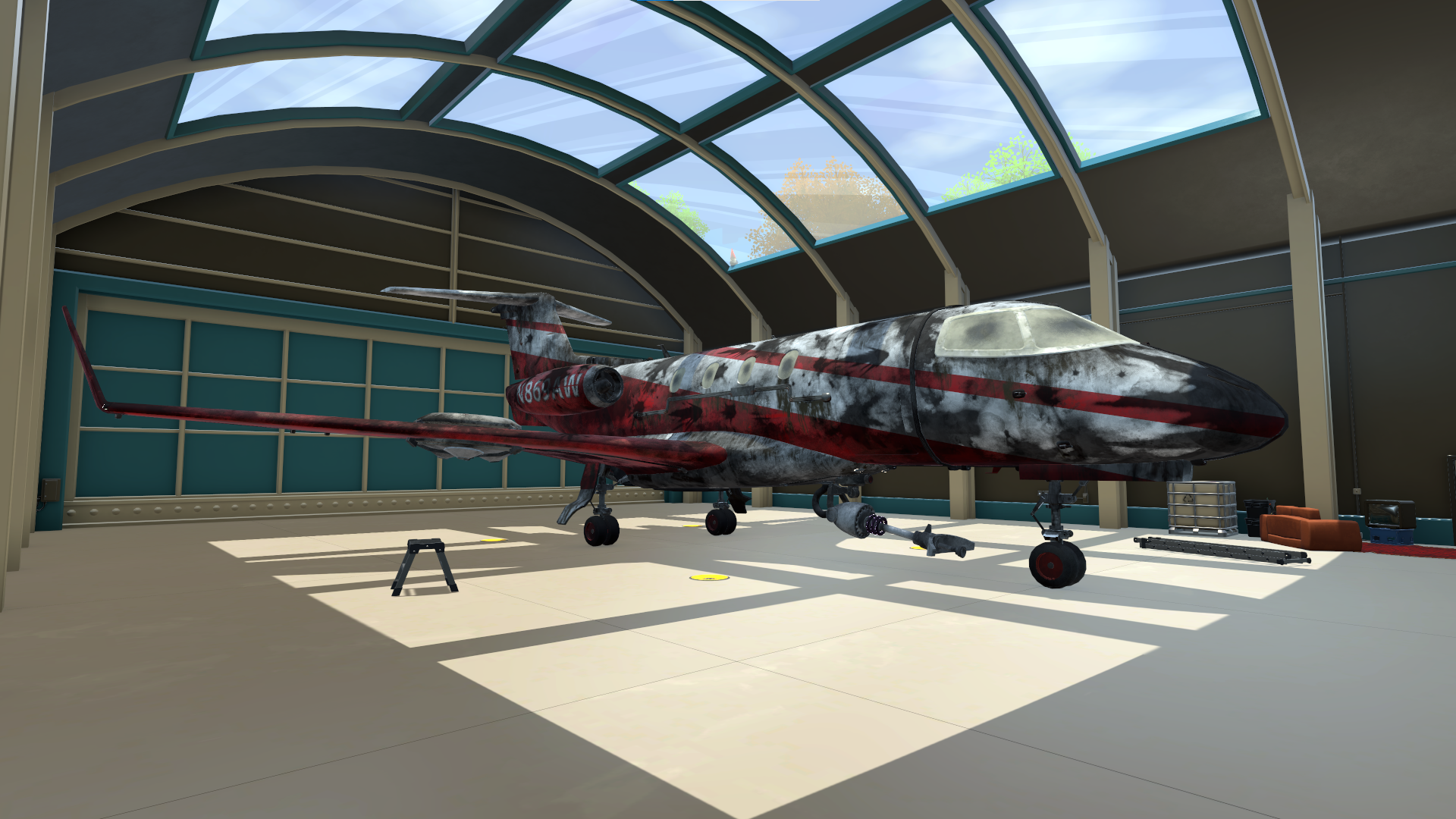 This is also the introduction to your new space, the hangar. 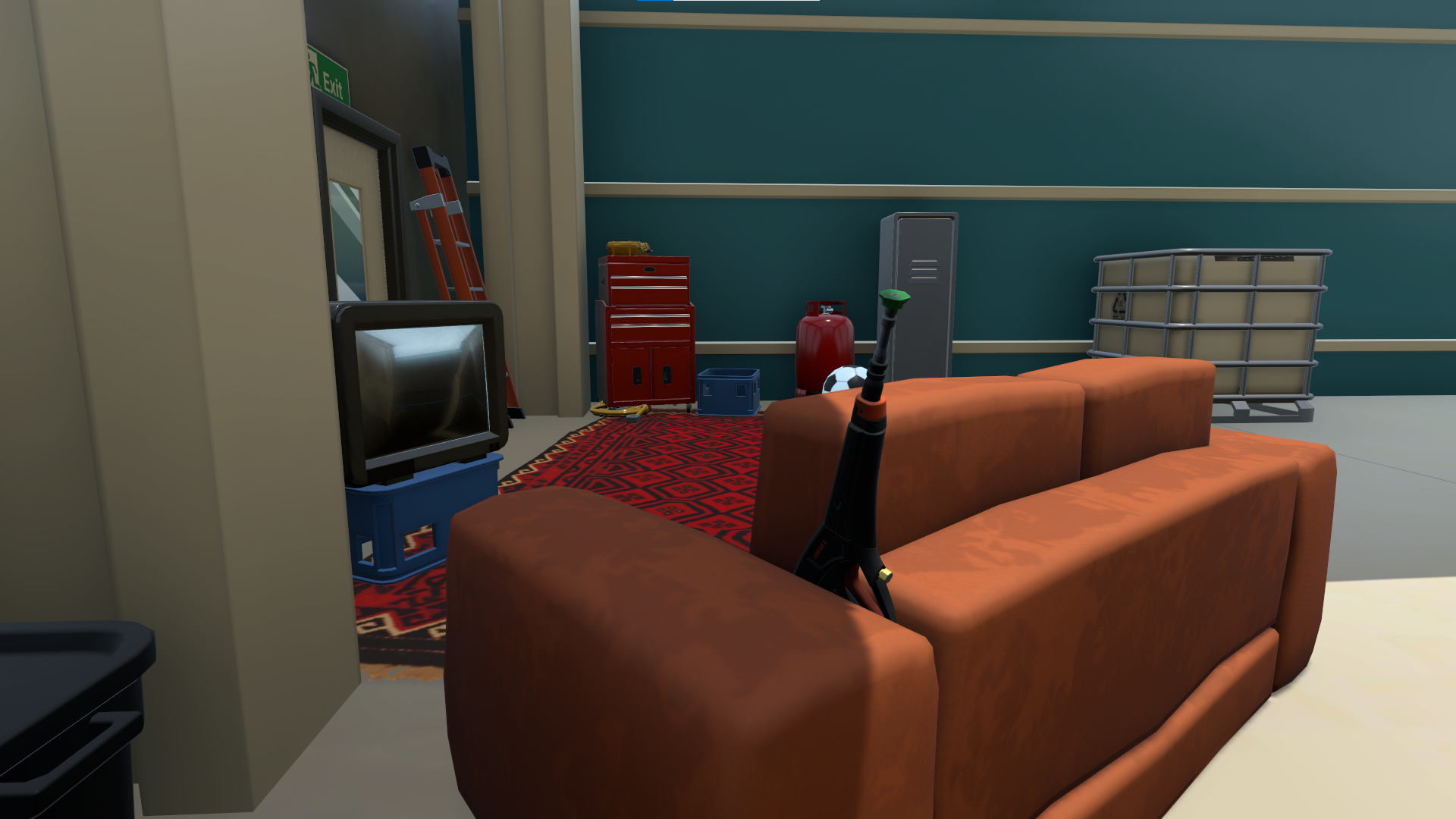 We're going to keep very quiet about lore implications and let the speculations be squarely in your, the community's court! 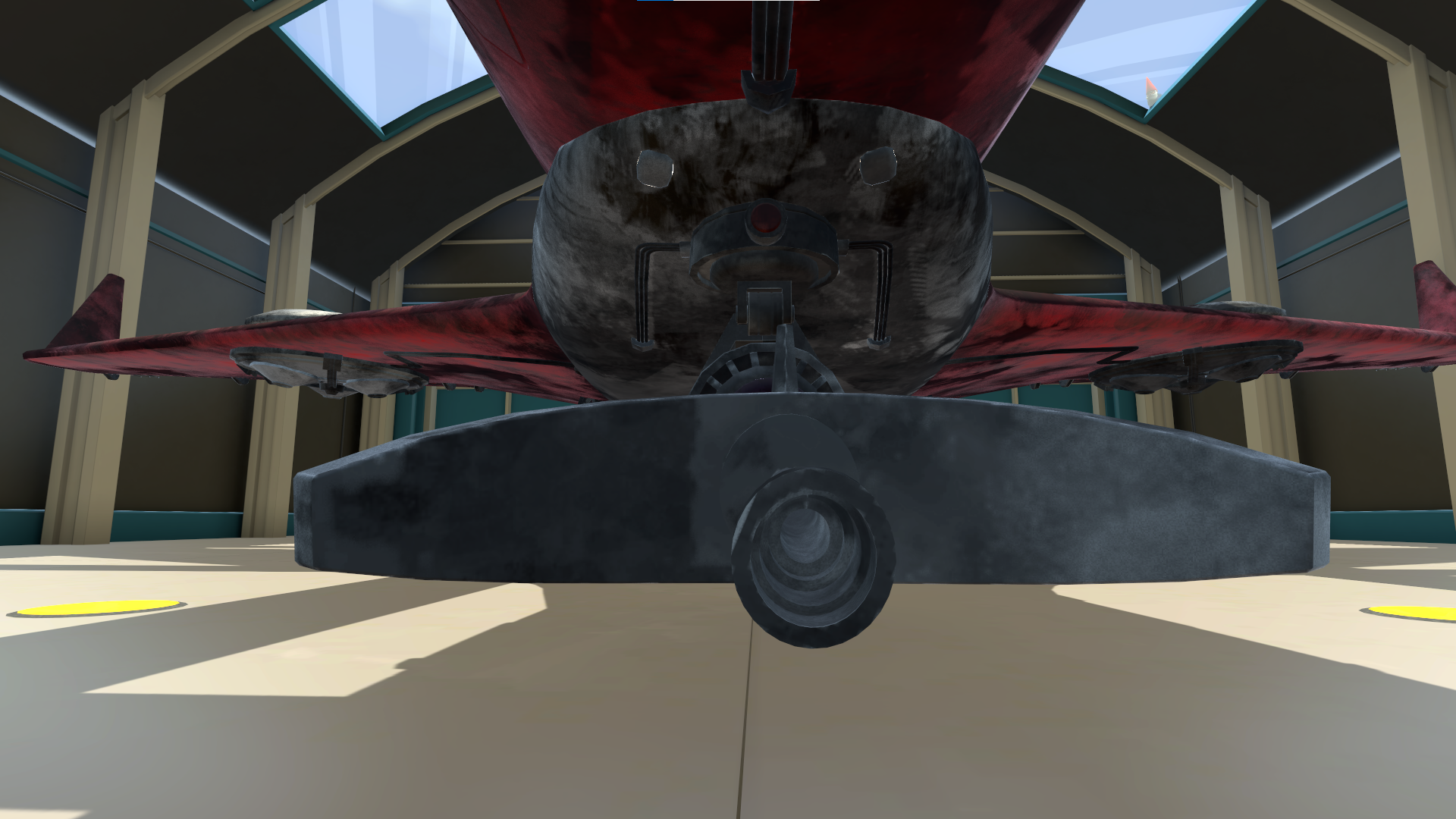 Anyway, this was a very short preview, we don't want to spoil too much when we're close to the next update. Though, be sure to give us your opinions on the thoroughly dirty Private Jet in the comments section below.

These 2 washer skins coming in the next update the Retro (Urban X U2) and Space Cadet (Prime Vista 1500). These are to use in the challenge modes, personal challenges, special missions, and generally for newer players in career mode as they are very affordable.

Will you be purchasing them?

Until Next Time...
0.6 is getting close, don't miss it touching down on the Steam runway very soon!

If you want to vote on new game ideas, talk to the community, find some tough dirt - then join our Discord community: https://discord.gg/powerwashsimulator 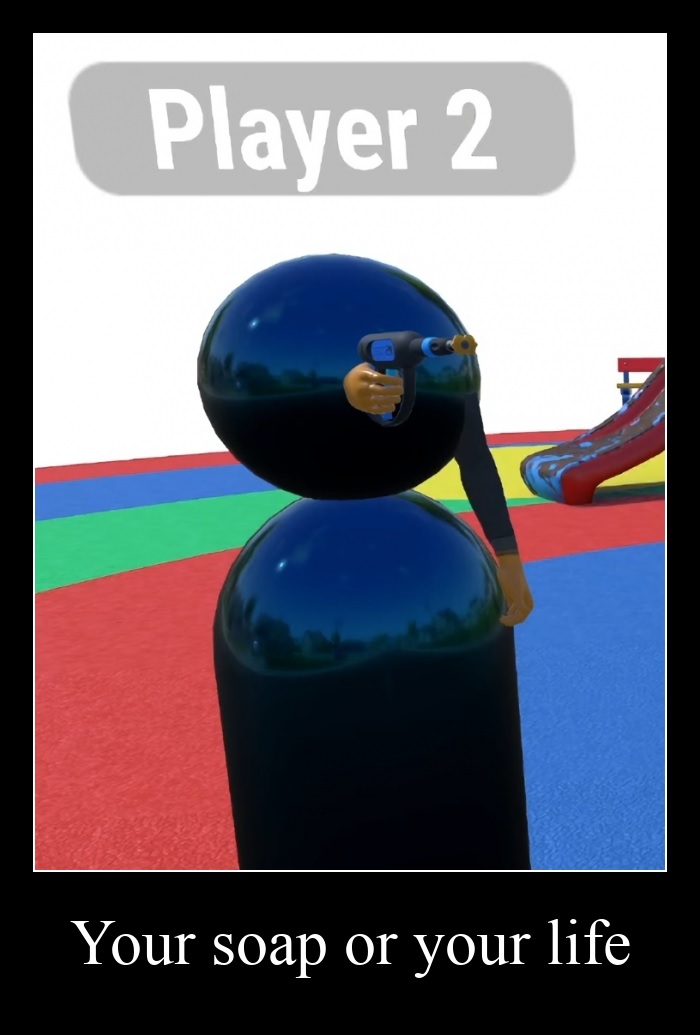 [V 0.6] Uses/Overview for all of the Nozzles and Extensions
Ever looked at the white nozzle and thought "Bruh this thing is useless"? Well, this guide will show you some uses, methods, and general overview of all the nozzles and extensions.
34 ratings

Emperor365
View all guides
Option for continuous water spray?
I just started playing the game (with controller), so I don't know if I simply missed this: I'd like to have the option to toggle the water stream on and off, rather than having to hold the right trigger permanently. I have a muscle disease and even with just the second job (cleaning the garden) it's already really painful....
3 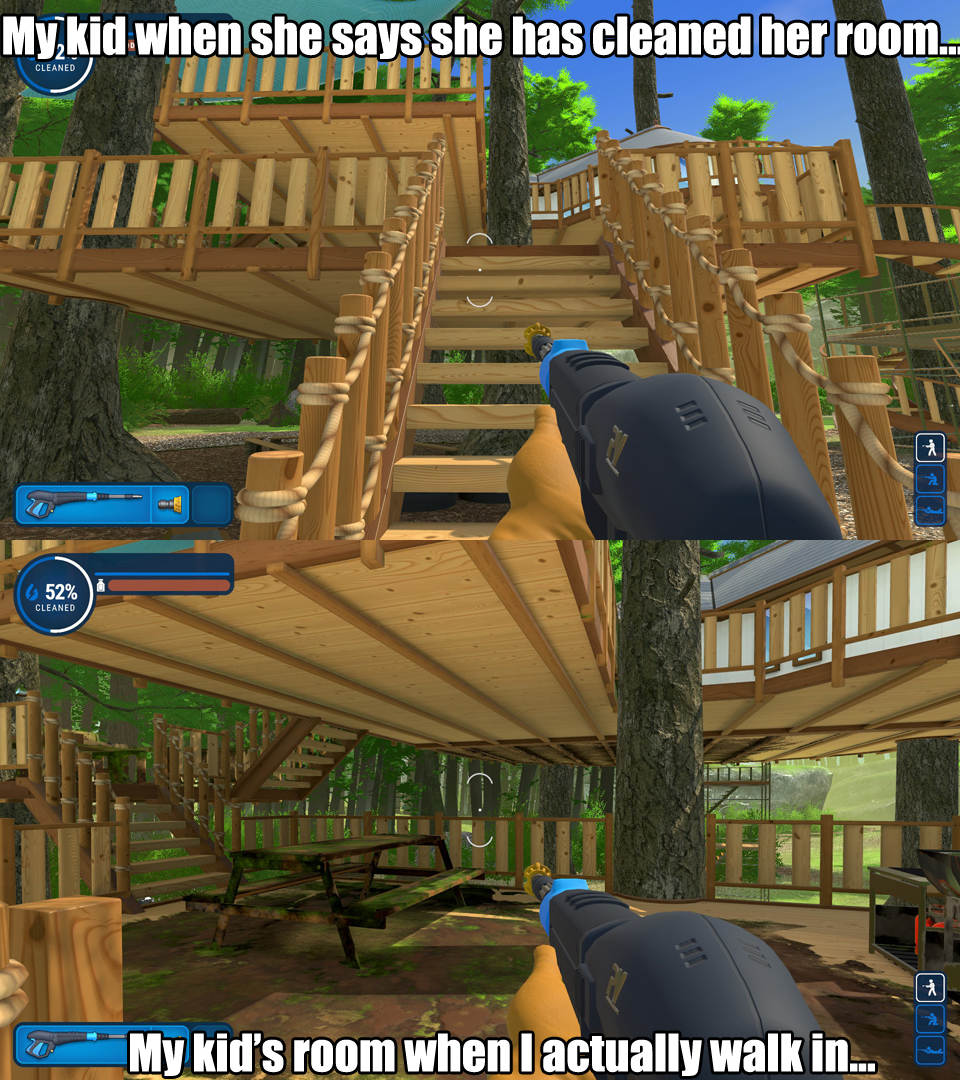 2
2
What I think of when I play PowerWash Simulator - every. time. 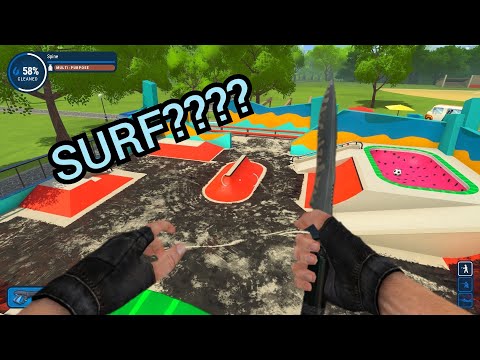 Recommended
29.7 hrs on record
Early Access Review
life is not worth living anymore 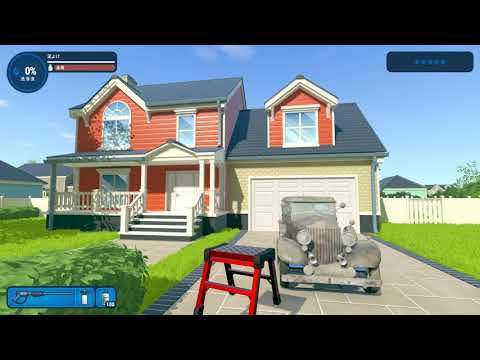 Mars Rover - Finding the Hatch
This guide will show you how to find the hatch on the Special mission called Clean the Mars Rover (Hint: It's behind the hill in front of the Rover). 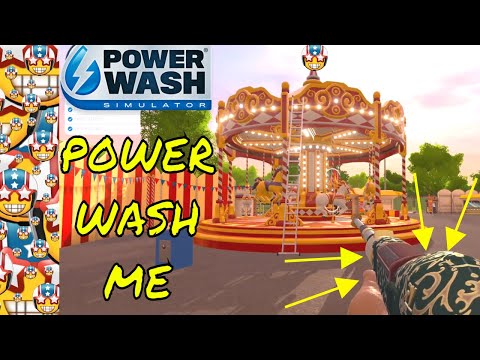 Recommended
22.8 hrs on record
Early Access Review
i thought i might play this for 2 hours then get bored because lets face it, its not that exciting to powerwash. But i just could not stop playing because the satisfying feeling so ye. get this game... 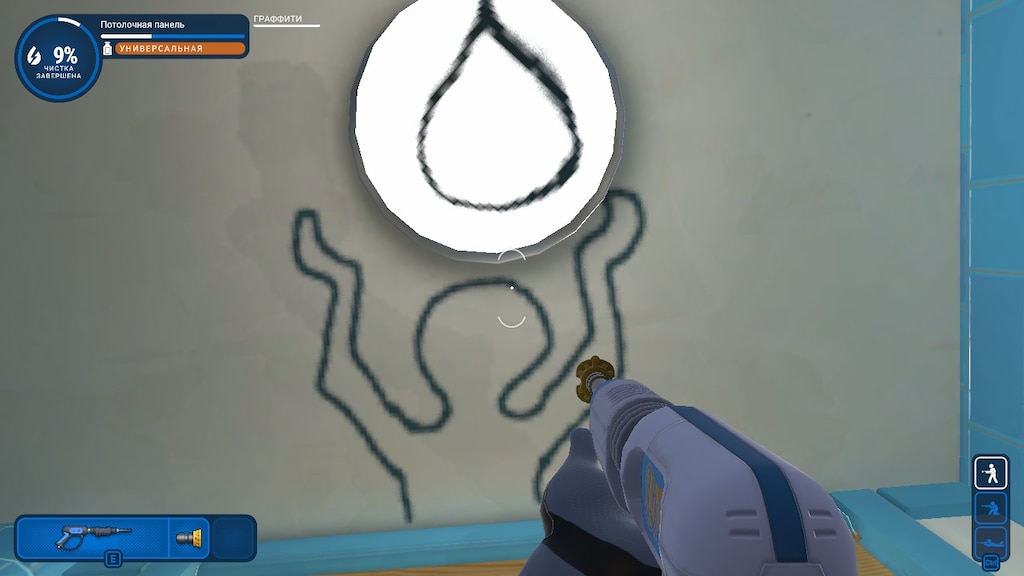 I have a cool photo
View screenshots
Screenshot 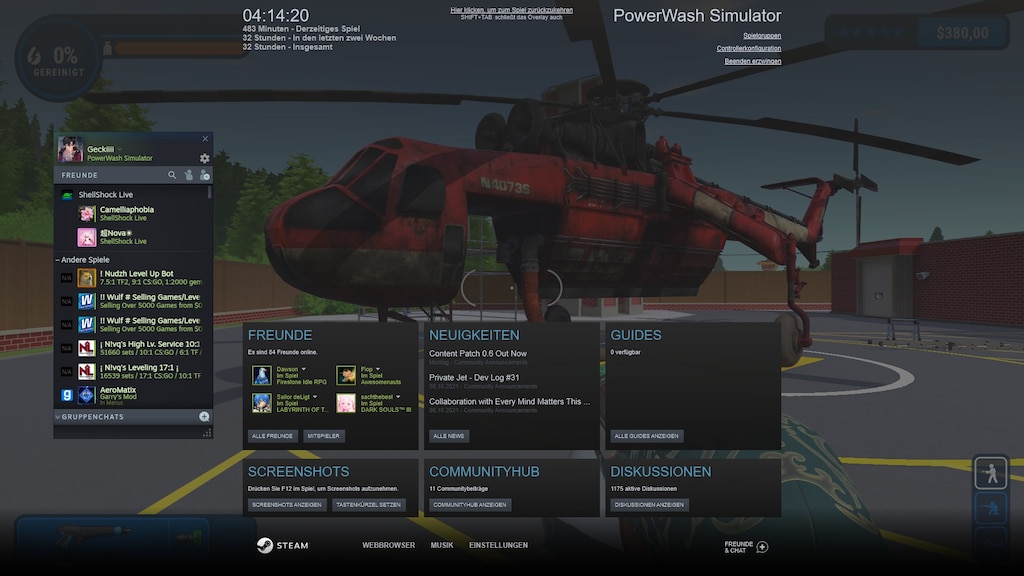 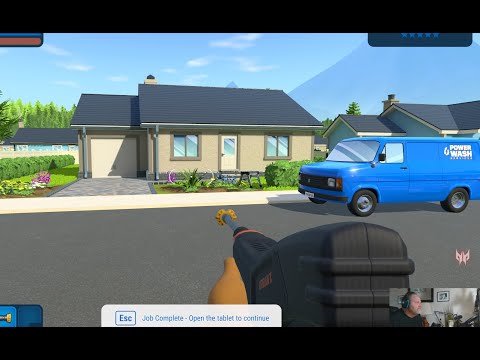 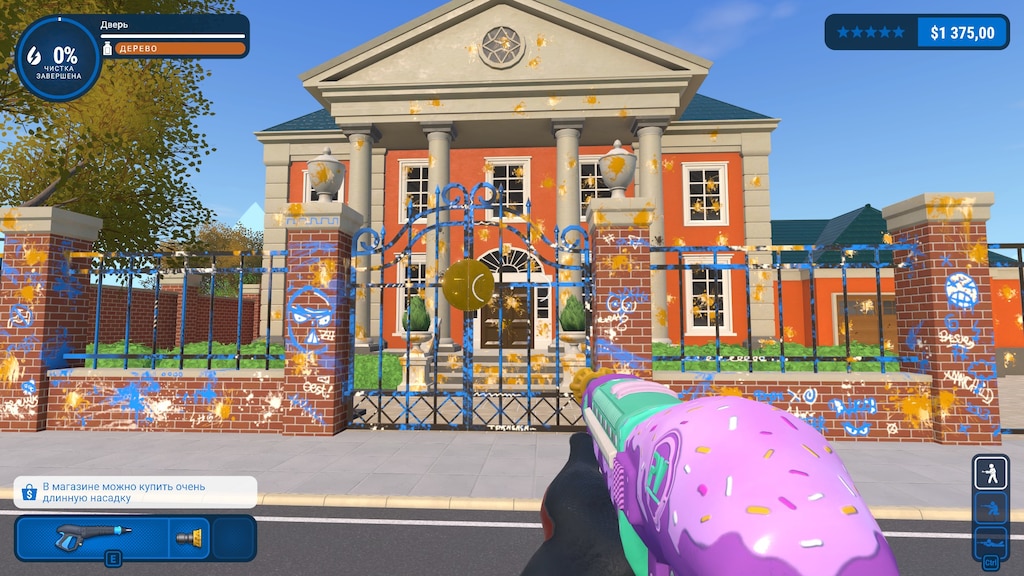 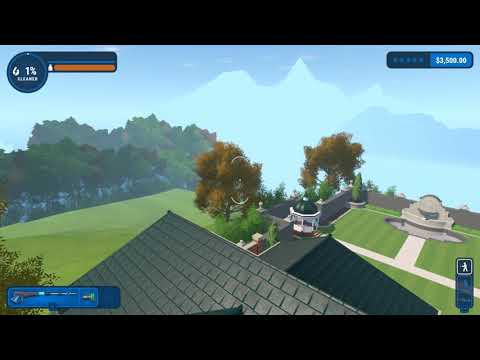 dienom9
View videos
Game won't update since 0.4
I've tried uninstalling and reinstall, restart, clear download cache, update graphic drivers, even clean steam install.... and nothing makes the update appear, the newest available level in my game is the tree house, don't know how to fix, anyone?
2

Tarrioh
9 hours ago
General Discussions
i cant finish the washroom
okay so i've checked everything and its all done but it says 9 out of 10 cistern pipes are cleaned but i've counted multiple times and there are only 6 pipes? am i missing something?
7