This is the ultimate Battlefield V experience. Enter mankind’s greatest conflict with the complete arsenal of weapons, vehicles, and gadgets plus the best customization content of Year 1 and 2.
$49.99
Visit the Store Page
Most popular community and official content for the past week.  (?)
Battlefield Definitive Edition Available now
Oct 22
Contains the Battlefield base game and the definitive collection of content: 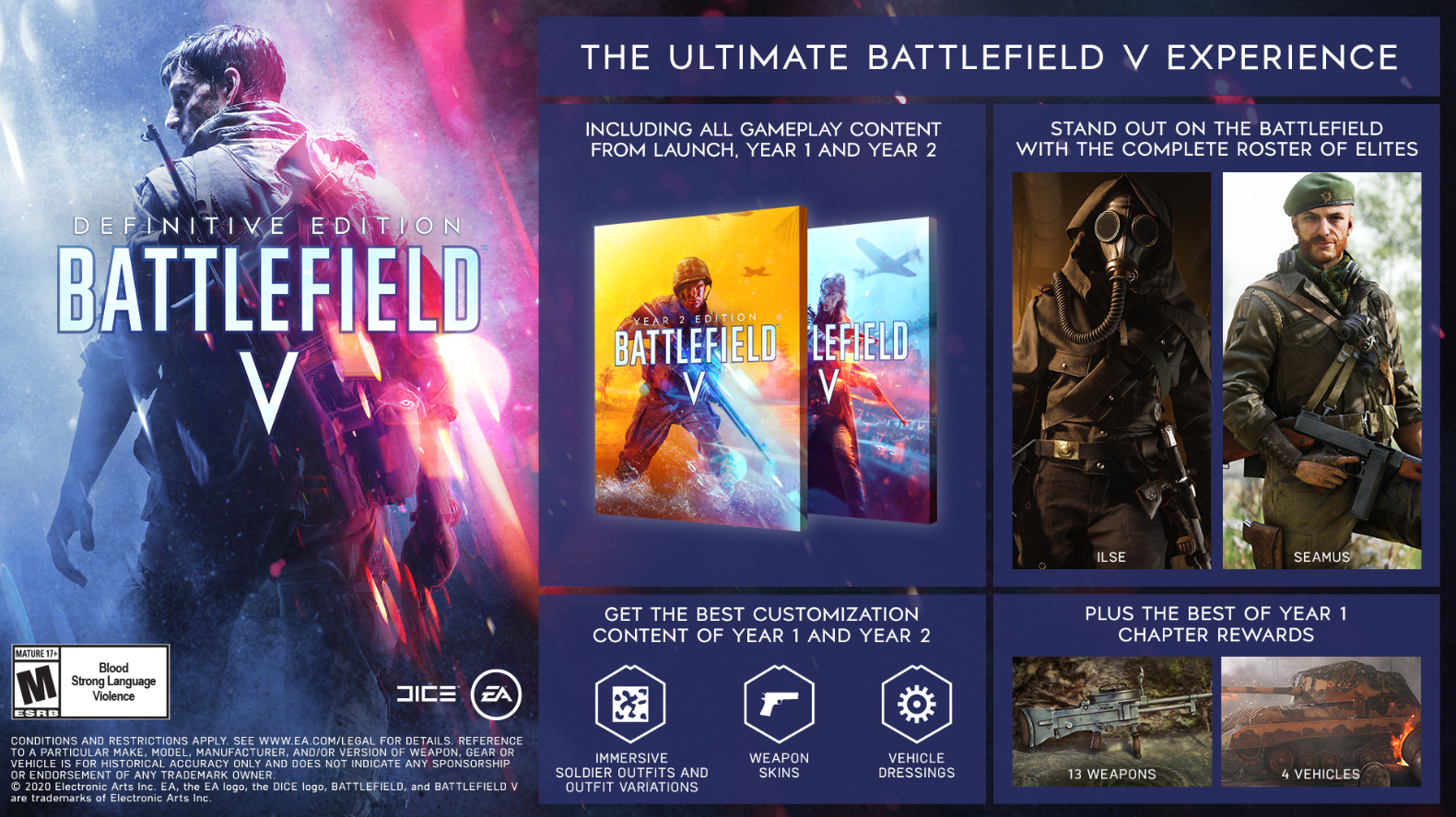 All gameplay content
Get all the weapons, vehicles, and gadgets from launch, Year 1, and Year 2, including the devastating bazooka and lunge mine

All Elites
Bring personality to the battlefield with Elites such as Seamus and Ilse, featuring signature looks, personas, and melee weapons

3 vehicle dressings
Outfit your vehicles with unique looks, like the US Sherman Flagship Flag and German Panzer IV Ready for War dressings

Battlefield™ V
112
32
EA Play
So i just got ea play today and i want to add bf5 to my library but it isnt showing the button to install and add to library. Can someone help?
6

X Gonna Give It To Ya
19 minutes ago
General Discussions
definitive edition
what about the people who just bought the year 2 edition recently no upgrade or anything? just screwing us over again like that?
9 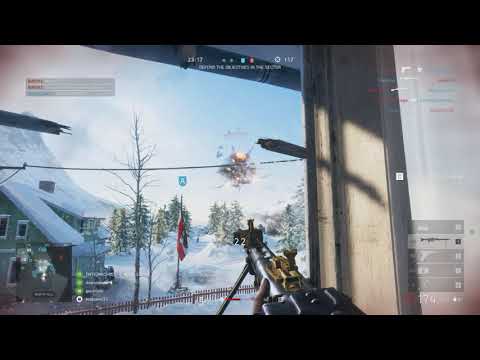 1
2
BF5 When you leave your window open 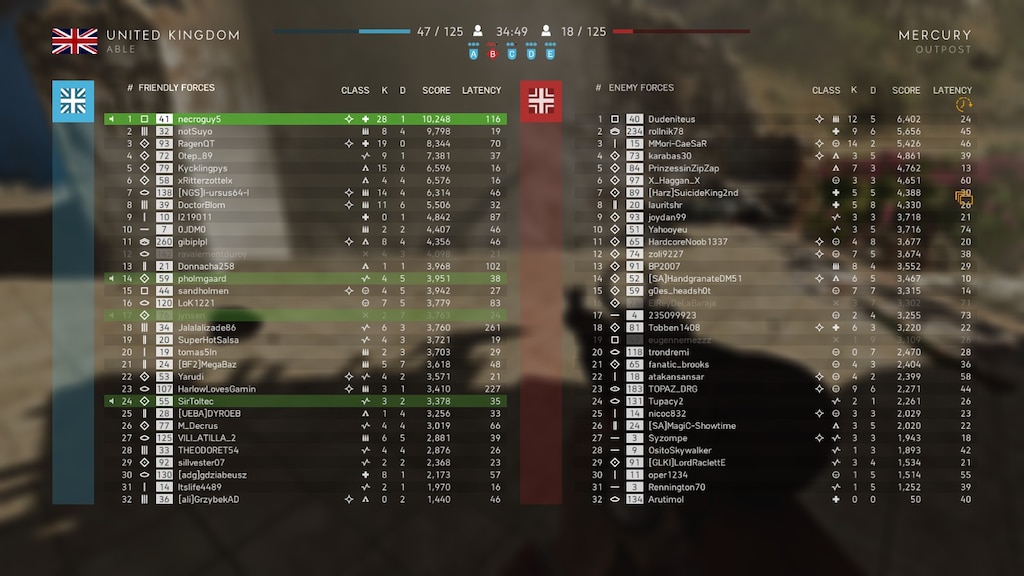 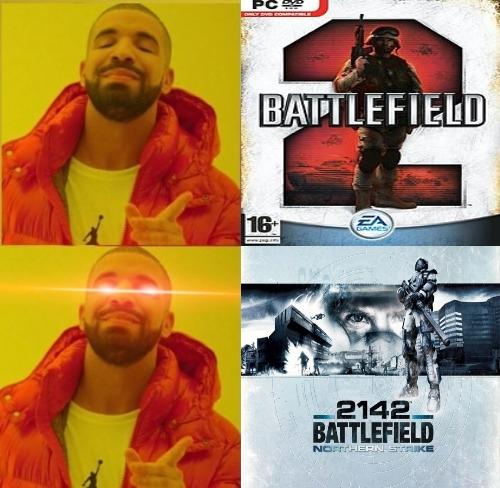 John Solenya
View artwork
BF 5
I purchased 1 year EA play but ı can not add to liblary that game why ? It's not available.
6

Not Recommended
6.0 hrs on record
I only play games because of their campaign and this campaign is a 50/50
It starts with a mission called "Under no flag" which is so bad, I don't even remember what was happening there besides shooting endless waves of enemies by MYSELF. 0/10
Second mission was "Nordlys" which is just a spit in the faces of those MEN who have actually prevented Germany from constructing an atomic bomb. I didn't feel anything, while playing it, which is why it was so boring. If they really wanted to show a woman in WW2, they should have shown Lyudmila Pavlichenko, who was a soviet sniper and had 309 confirmed kills, 309, she was an actual existing woman, not like this one! But wait.............. They didn't put USSR in because? Well, I don't really know, because they wanted to show that Russia didn't win war, I guess? Maybe DICE forgot something XD 1/10, cool skis in the end.
Third mission was "Tirailleur" , it was very linear and was clearly put in there just for historical accuracy, but come on, who erases people on photos like that? I literally don't understand. I knew his brother would die since the beginning, although, have to admit, shows some historical accuracy and tries to make a person think about what black people actually did during WW2, and I kind of like it, 6/10 mission.
Last mission, though, is a blast. If the entire game was just "The last tiger", I would've given it 10/10. I swear, this is the first time i see someone trying to portray a nazi soldier in a game and it works. It shows their feels, that feeling of devastation in the end got me absolutely hooked to my seat, as well as the gameplay was kind of cool. The only question after that is how did u guys manage to make a mission about a nazi soldier, but not a mission about a soviet soldier? And why lol. USSR lost around 30 million people during that war and there is not a single mention about them, even after a lot of updates. I am waiting for this to get corrected with future updates, but those are just miserable hopes, they would never come true. Maybe someday DICE will come up with an actually good WWII game, that has an Eastern Front campaign.
Total is 17/40, which is 42.5%, although I would recommend this game just for this one last mission and for multiplayer. 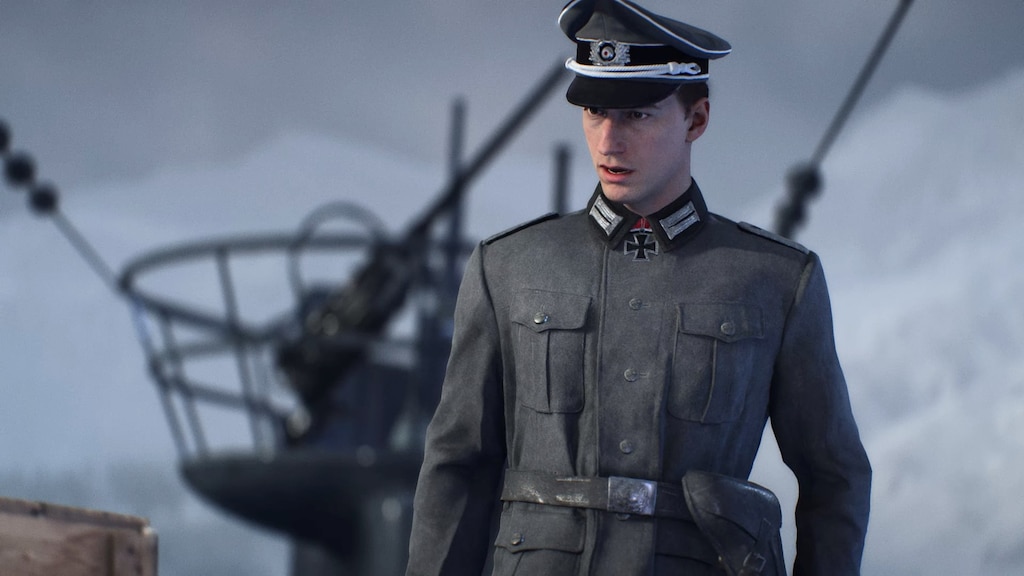 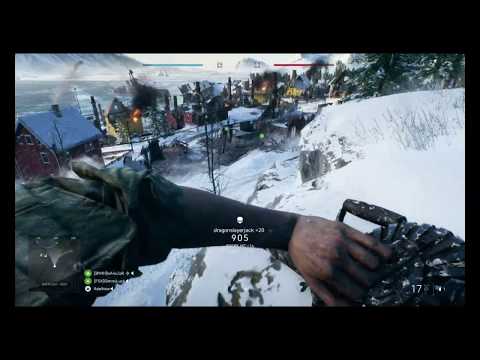 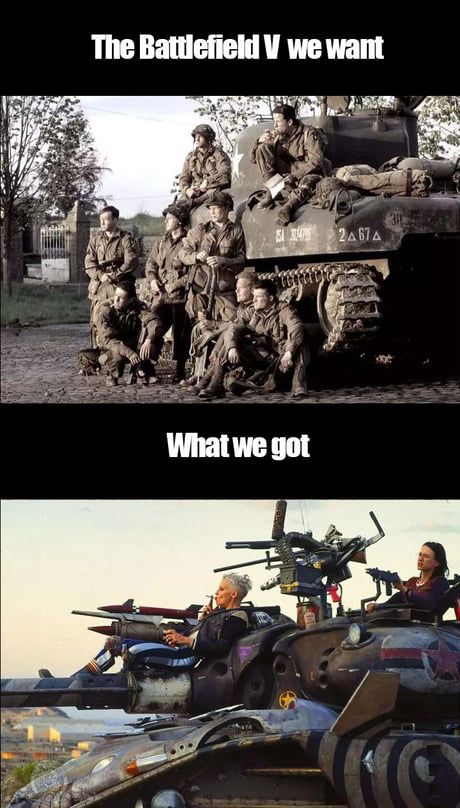 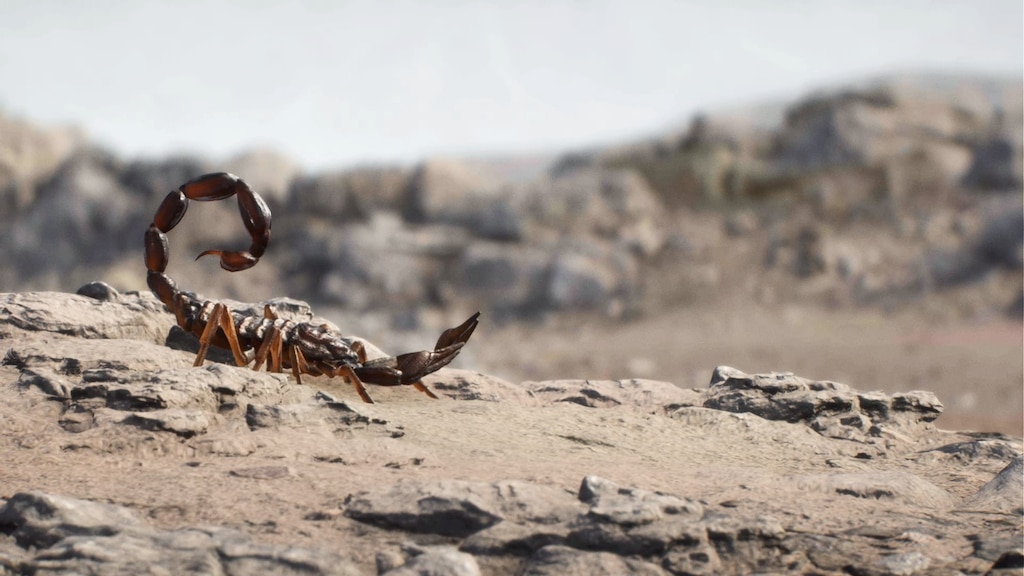 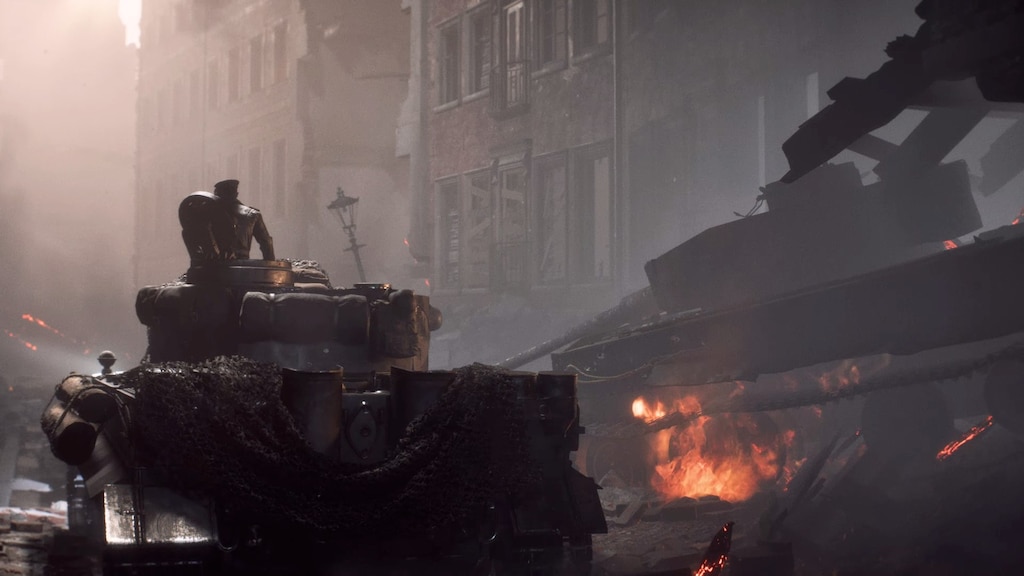 Not Recommended
20.3 hrs on record
Half-assed. No French, nor Russians? I think the revive mechanic needs work, you can't get revived if you get assassinated from behind, but I can get shot in the head by an arisaka, or a kar98 and be revived no problem? Besides that it's Battlefield, snipers are still annoying and people camp vehicles. I don't know the validity of it having no anti-cheat. If that's true I feel like I shoulda gotten a refund. Those are my thoughts

-----
Personal note, I feel like AA is ridiculously strong, the AA Valentine just needs to look at you and you're dead.
-----

Get it on sale just to try it. I really do feel it's imcomplete.

0
3
this is AI in battlefield V

Recommended
52.9 hrs on record
This game is great extremly historaclly inaccurate but its till fun 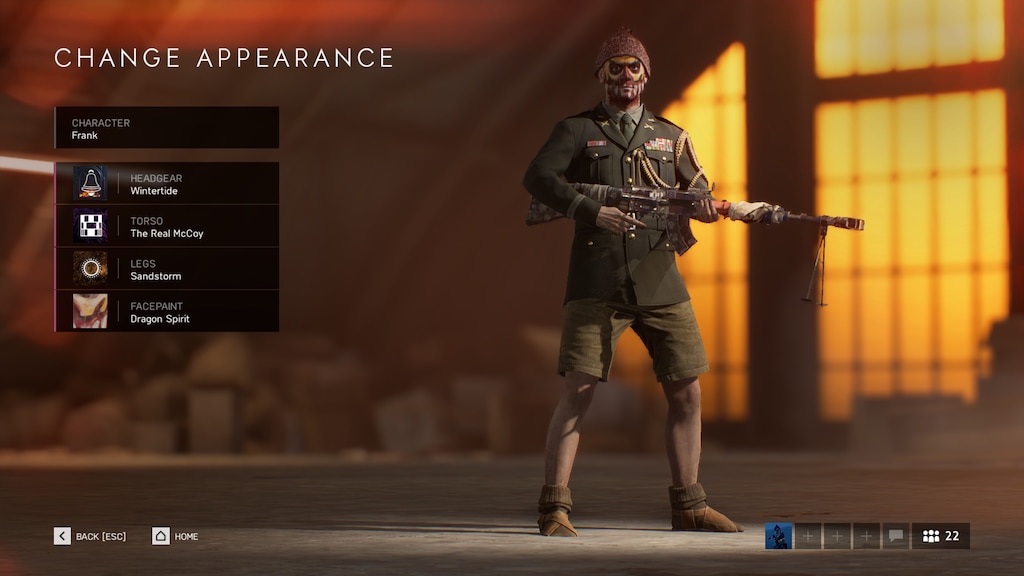 ALL THE LETTERS --- SOLO PLAYER
All the letters of solo player, Soluces of all letters .....

Robinlou1FR - FabLand1
View all guides
Definitive Edition
Whats the deal with this? 2 weeks ago I bought 'Overture' and 'Lightning Strikes' bundles from the store, yesterday I bought 'Trial by Fire' and 'Defying the Odds' bundles, is there going to be an upgrade option for those of us who have the 'Year 2' edition - are we going to get the other chapters or do I need to buy the next 2 chapters in 2 weeks?...
3 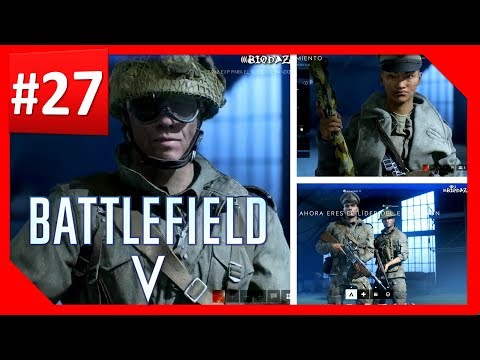 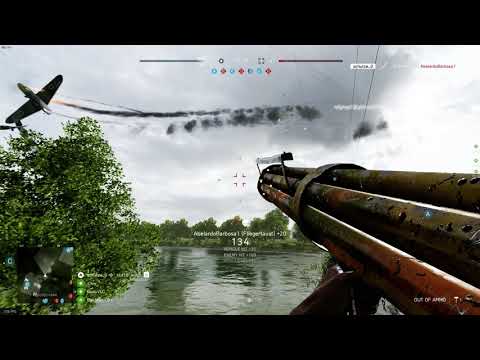 Middle Finger
1 hour ago
General Discussions
BFV Achievements Unlocked!
Aug 24
BFV Achievements have just been added alongside many other EA games. Achievement progress is retroactive, meaning if you’ve completed the objective already in Origin or Steam, you’ll be granted the achievement in Steam.